Paul Keating is PM, Christopher Skase is arrested in Spain, 15-year-old Daniel Johns pens a little ditty, Tomorrow, and, in a stellar year for Australian cinema, both Muriel's Wedding and Priscilla, Queen of the Desert are released. The year is 1994 and, when you realise kids born in 1994 are well and truly getting married and having kids of their own right now, it probably makes you feel as old and dated as this apartment felt before Circle Studio Architects came along... 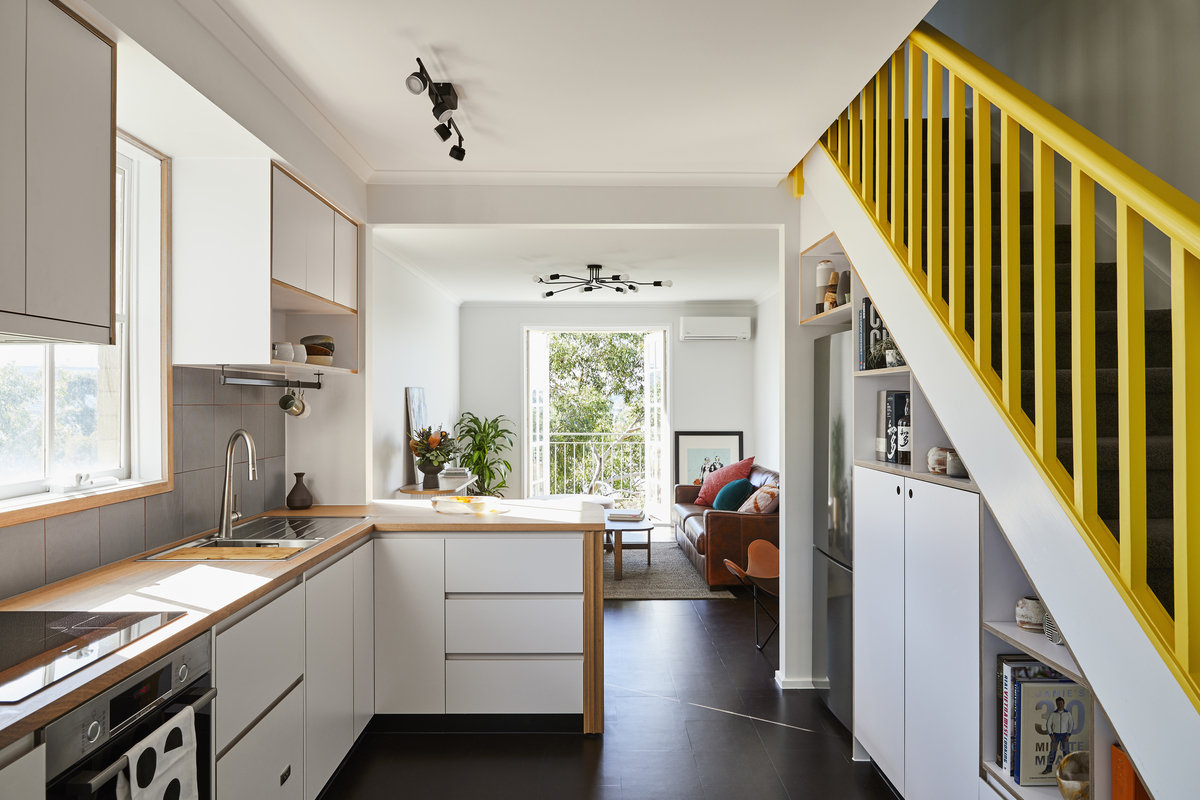 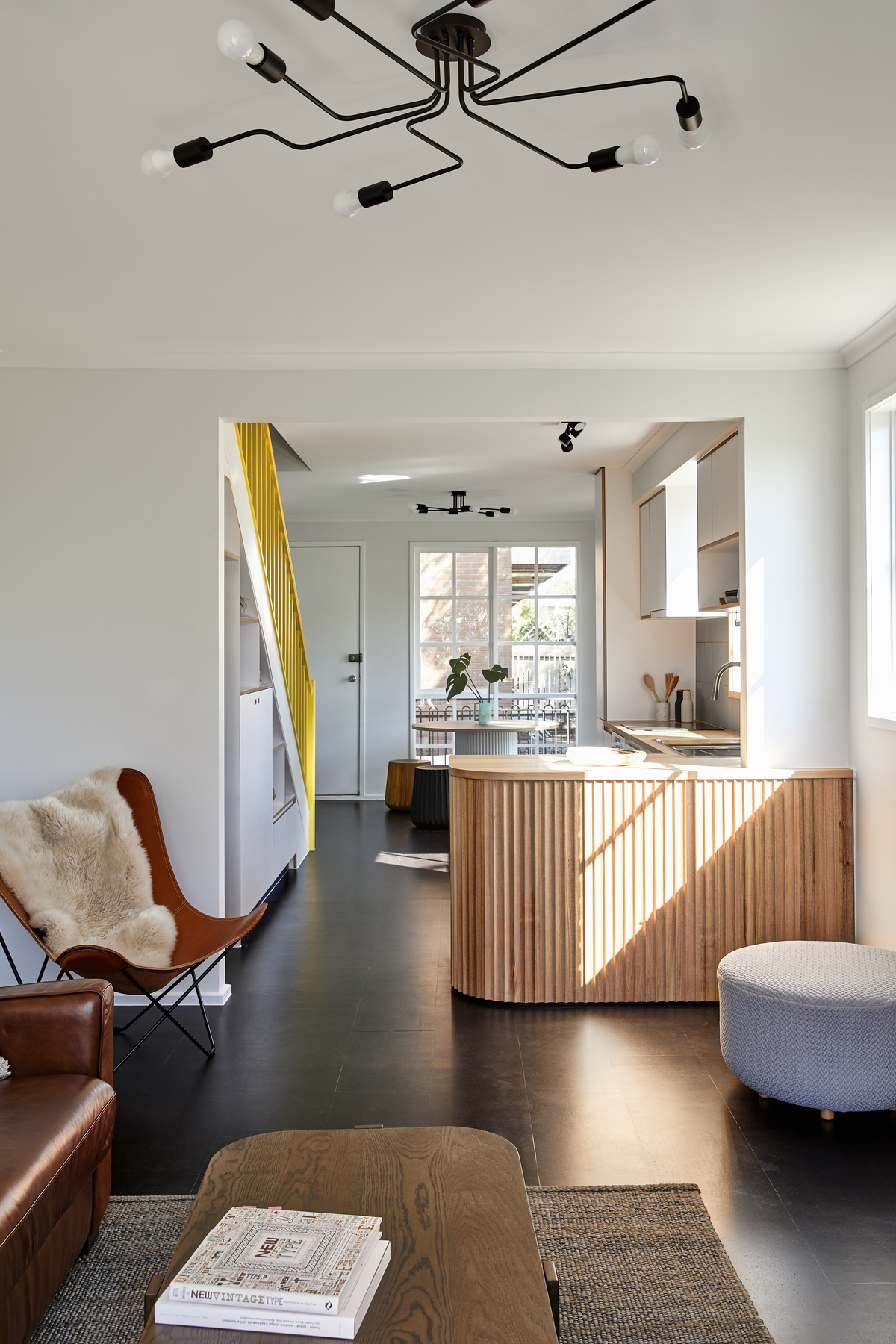 The 2-bedroom, brick-veneer apartment on the banks for the Maribyrnong River in Footscray "already had beautiful natural light and an excellent view to the river and Footscray Park, however, it had seen better days and was in need of a refresh", explains Circle Studio Architects. 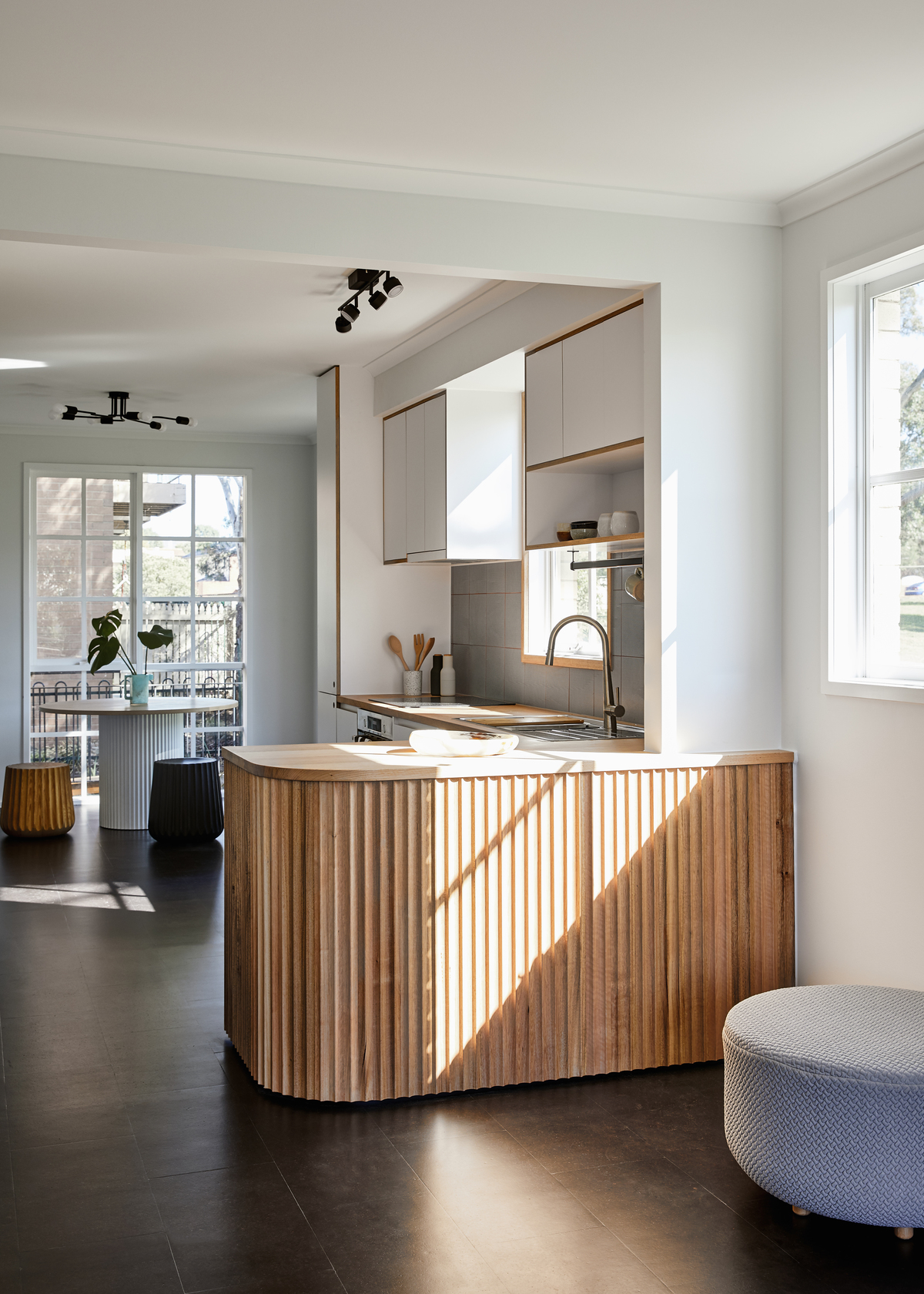 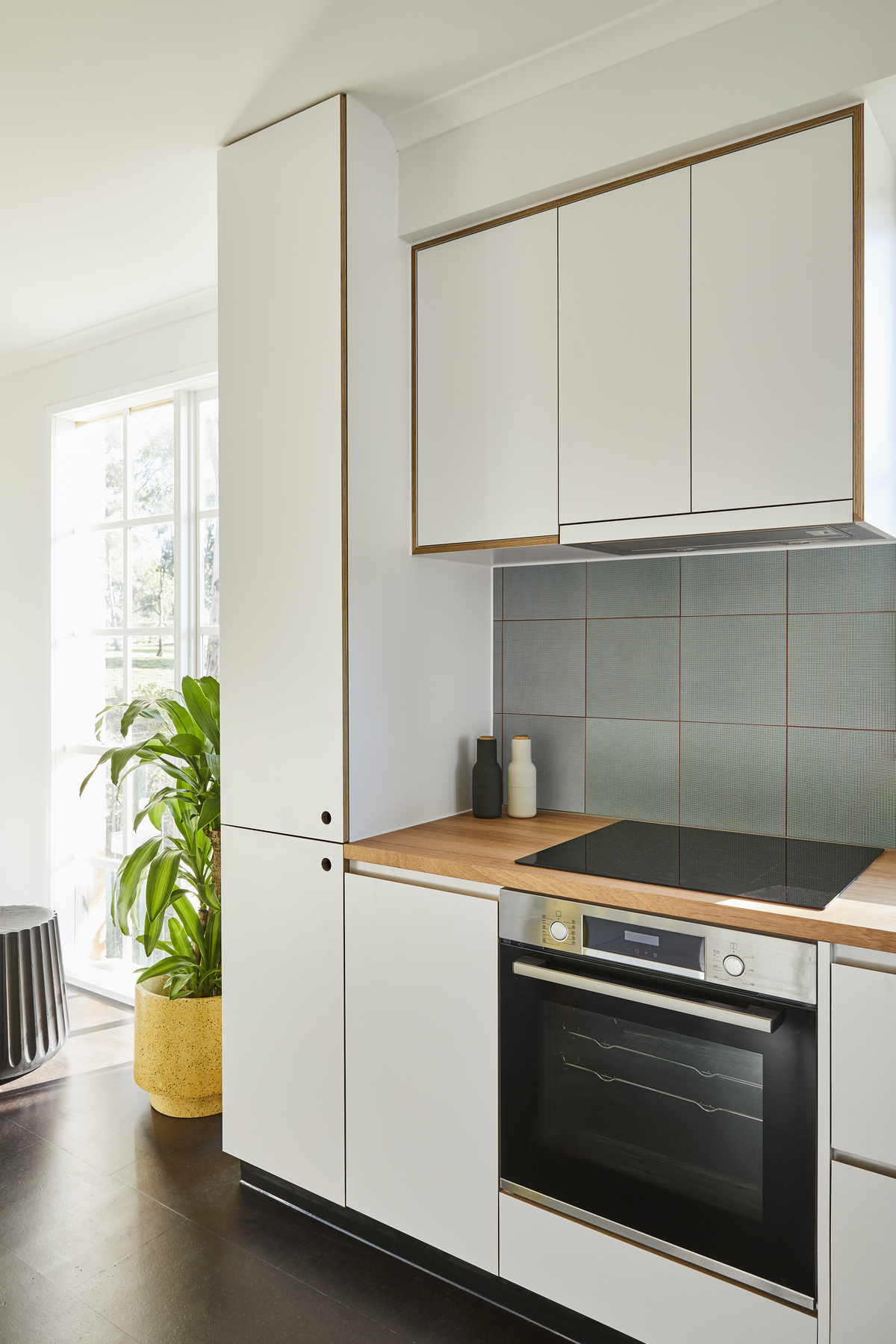 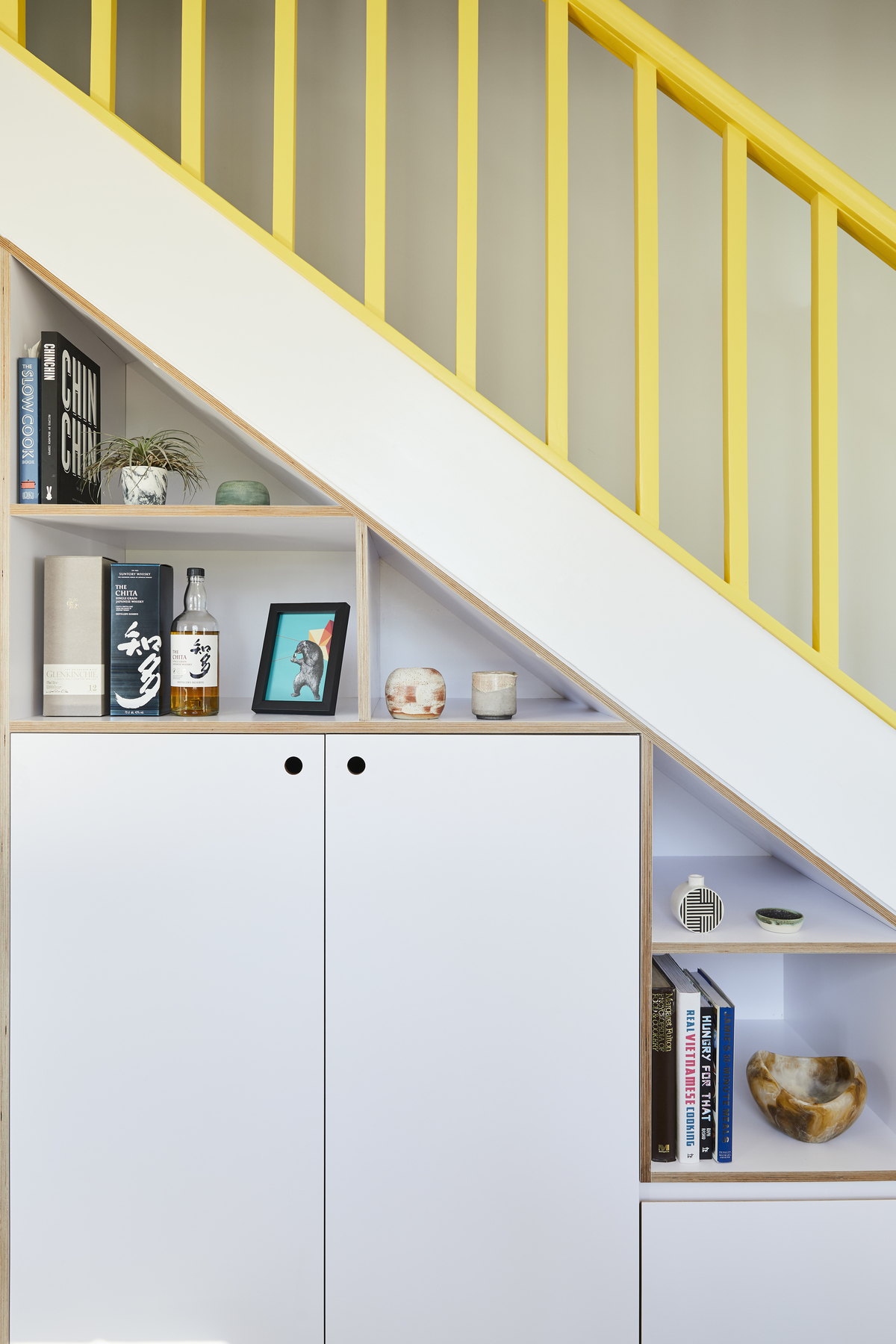 The revamp, built by Carland Constructions, opens up the ground floor living areas into a single, open-plan space. This dramatically improves the light and sense of space in the home by giving the kitchen, living and dining spaces access to light from three sides. Rather than retain the existing U-shaped kitchen, the architects opted for an L-shape, "to give the illusion of more space and provide more accessible cabinetry space." The kitchen was extended out and much-needed storage (can you ever have enough?) is tucked under the stairs to make the most of the available space. A rounded bench with fluted timber softens the edge of the kitchen and makes circulation smoother. 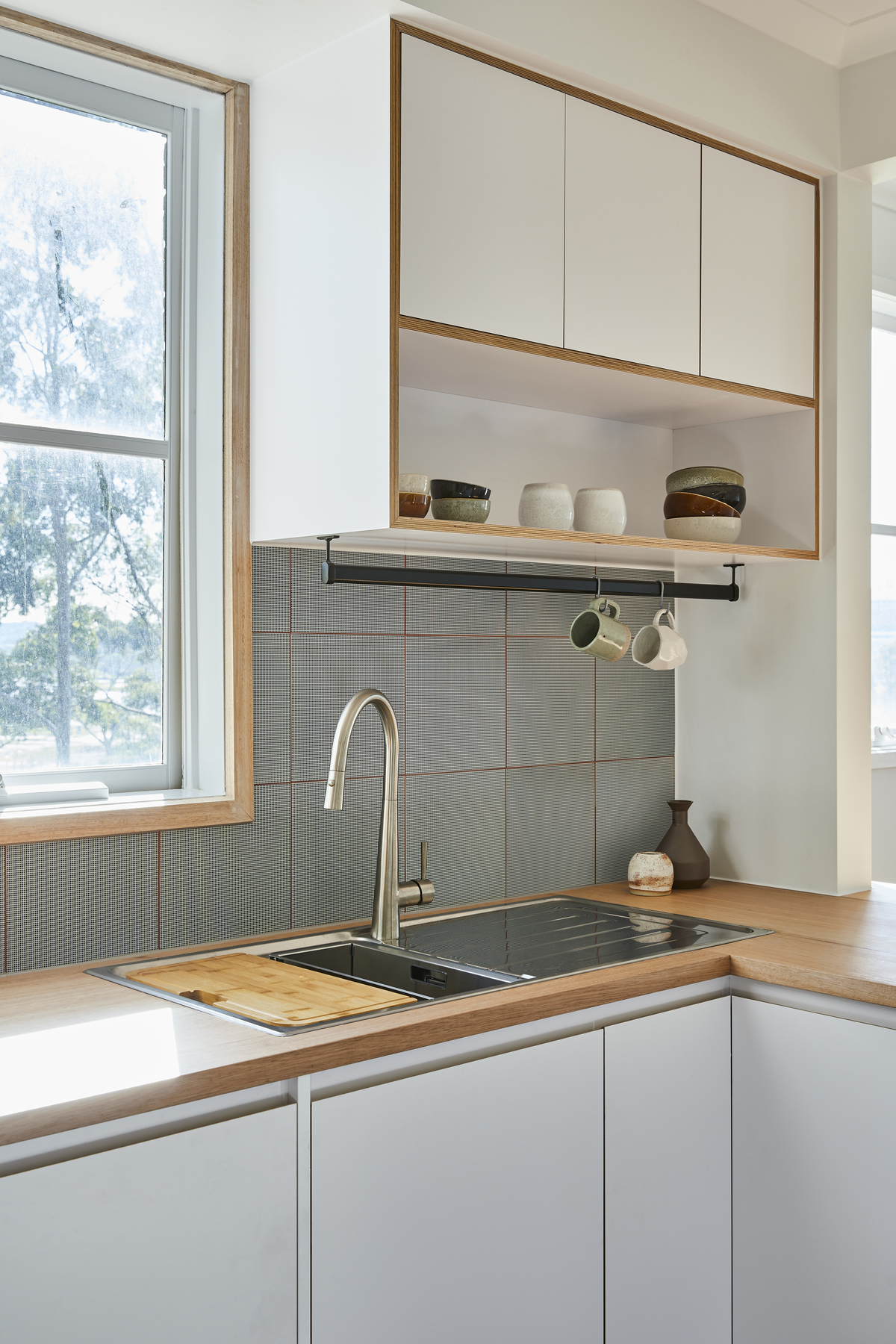 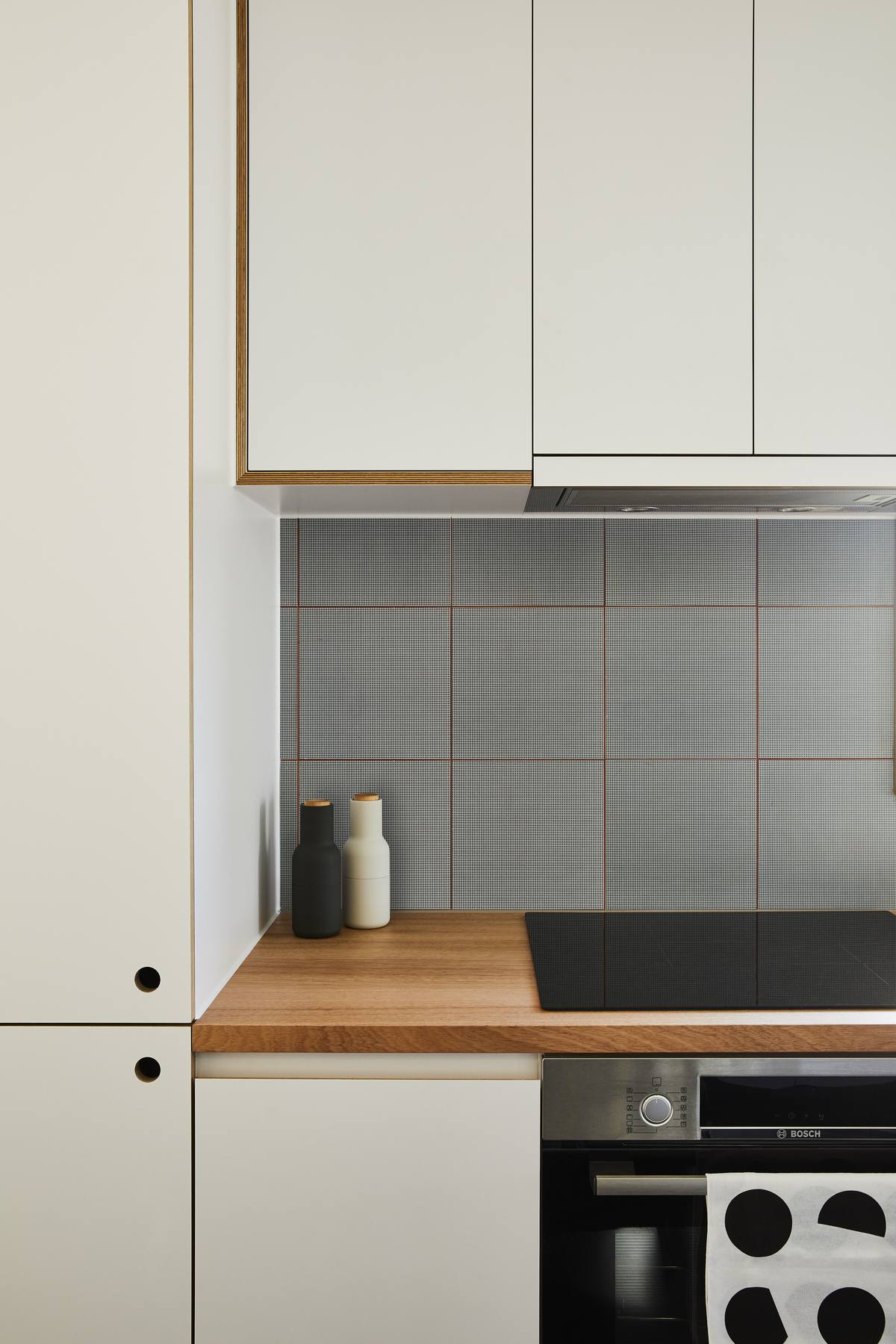 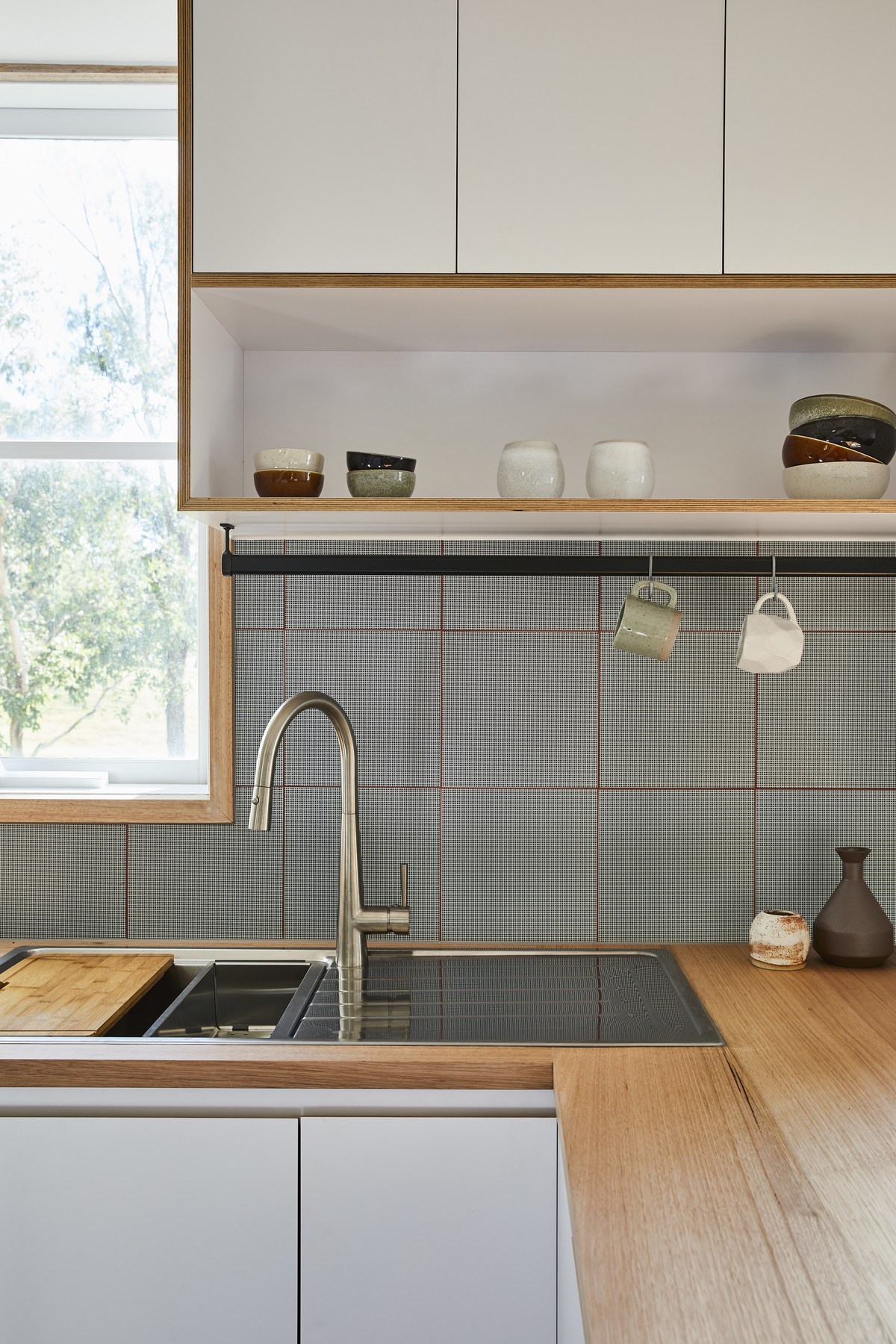 The owners, involved in fashion and design were not afraid of a splash of colour and pattern. The bright yellow balustrade is the first hint of fun in the home. On closer inspection, the graph paper patterned tiles in the kitchen add another layer of texture and depth to the living areas and, combined with terracotta coloured grout and natural timbers, infuse the home with rich warmth. 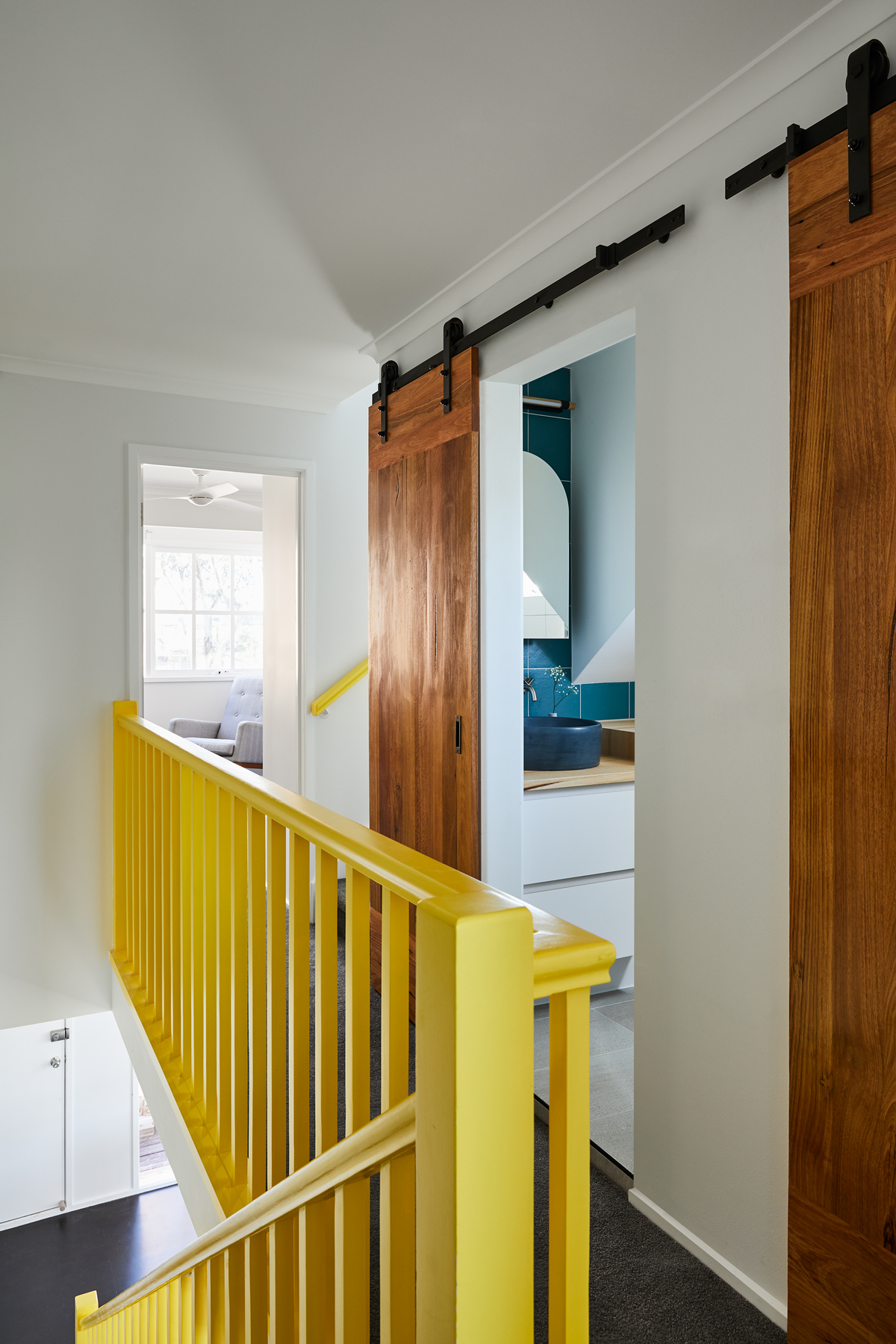 "The client had some beautiful timber workbenches she wanted to incorporate into the house", explains the architect. "The original thought was to see if we could repurpose them into the kitchen or living room joinery, however the sizing of the slabs of timber proved difficult. Instead, they were repurposed as surface-mounted sliding doors to the first-floor bathroom and toilet areas, making them a feature on the stair landing." 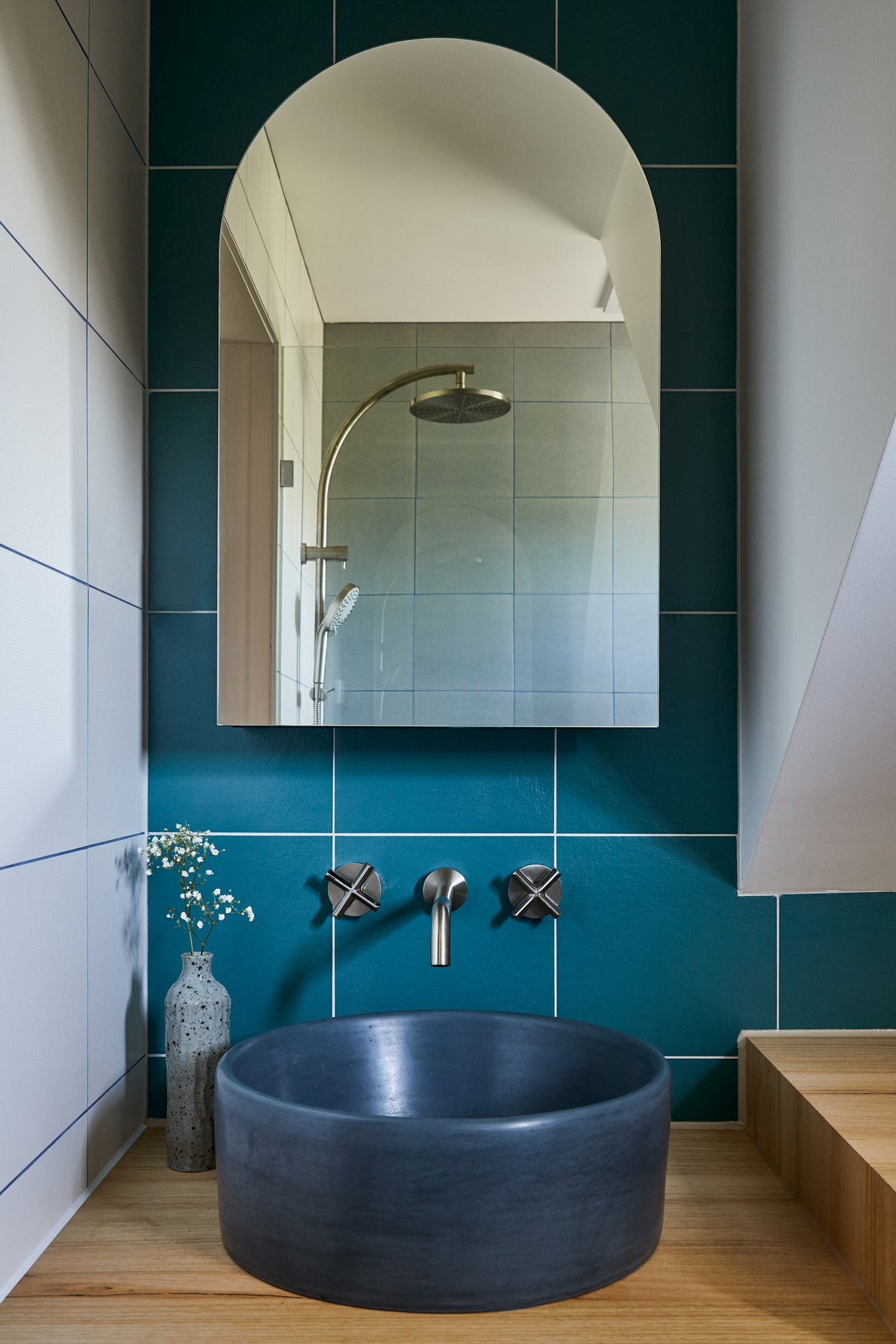 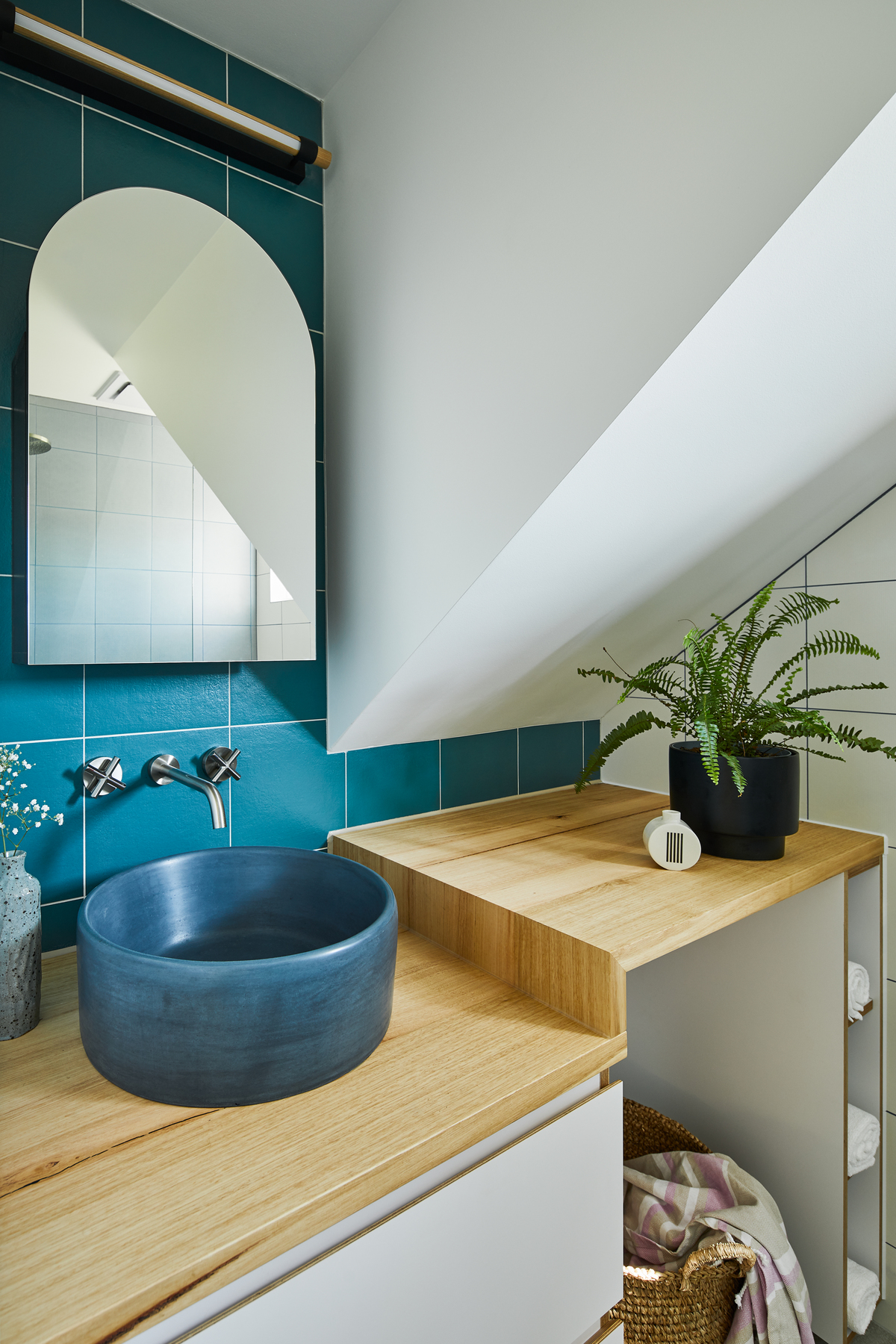 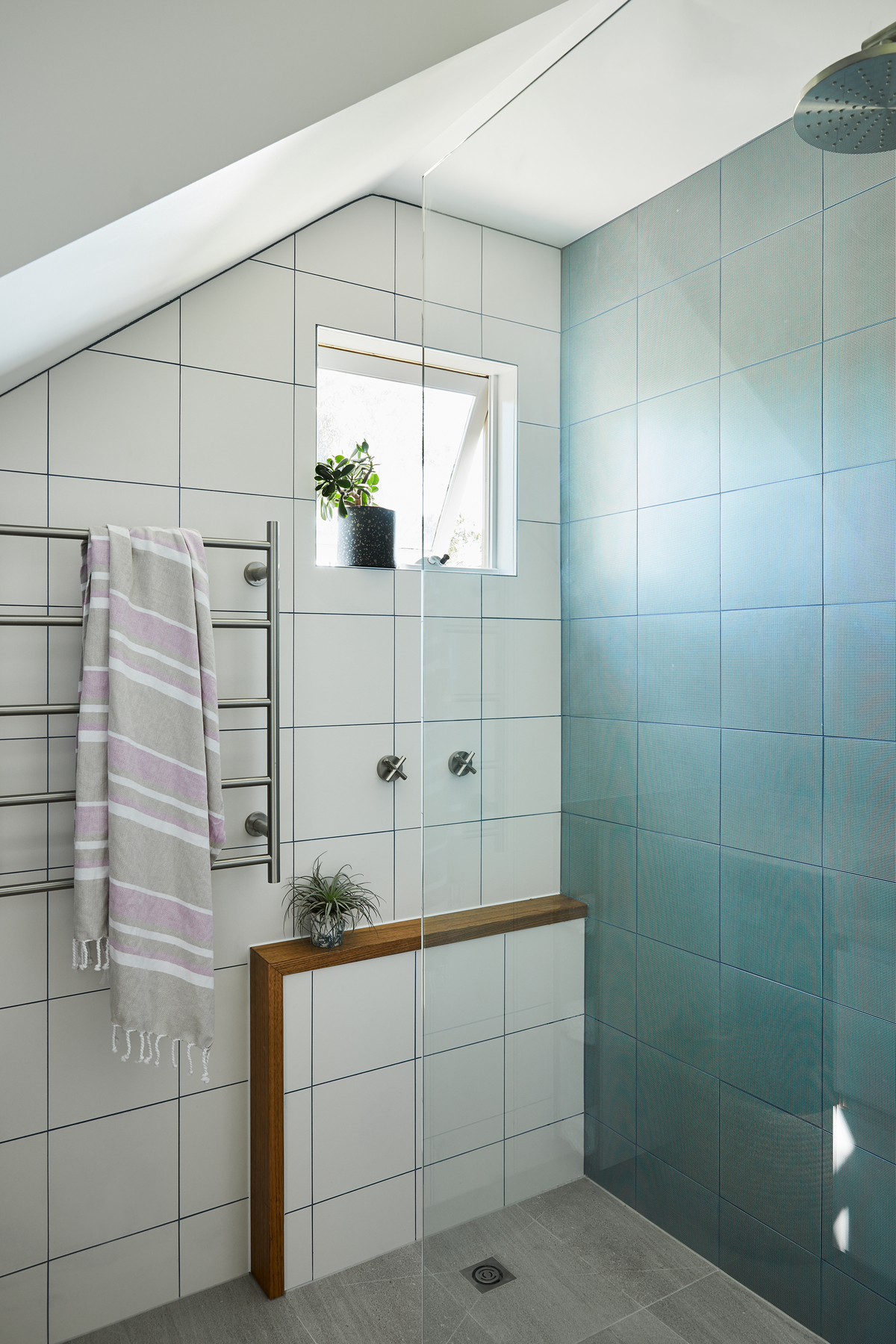 The bathroom continues the fun, with bold blue tiles and a blue sink enlivening the space. "The bathroom, in particular, was a difficult space", explains the architect, "wedged under a stair to a third floor, it was cramped and not utilised in the most efficient way... due to plumbing constraints, we kept the shower in its original location, but moved the basin to a previously underutilised nook." 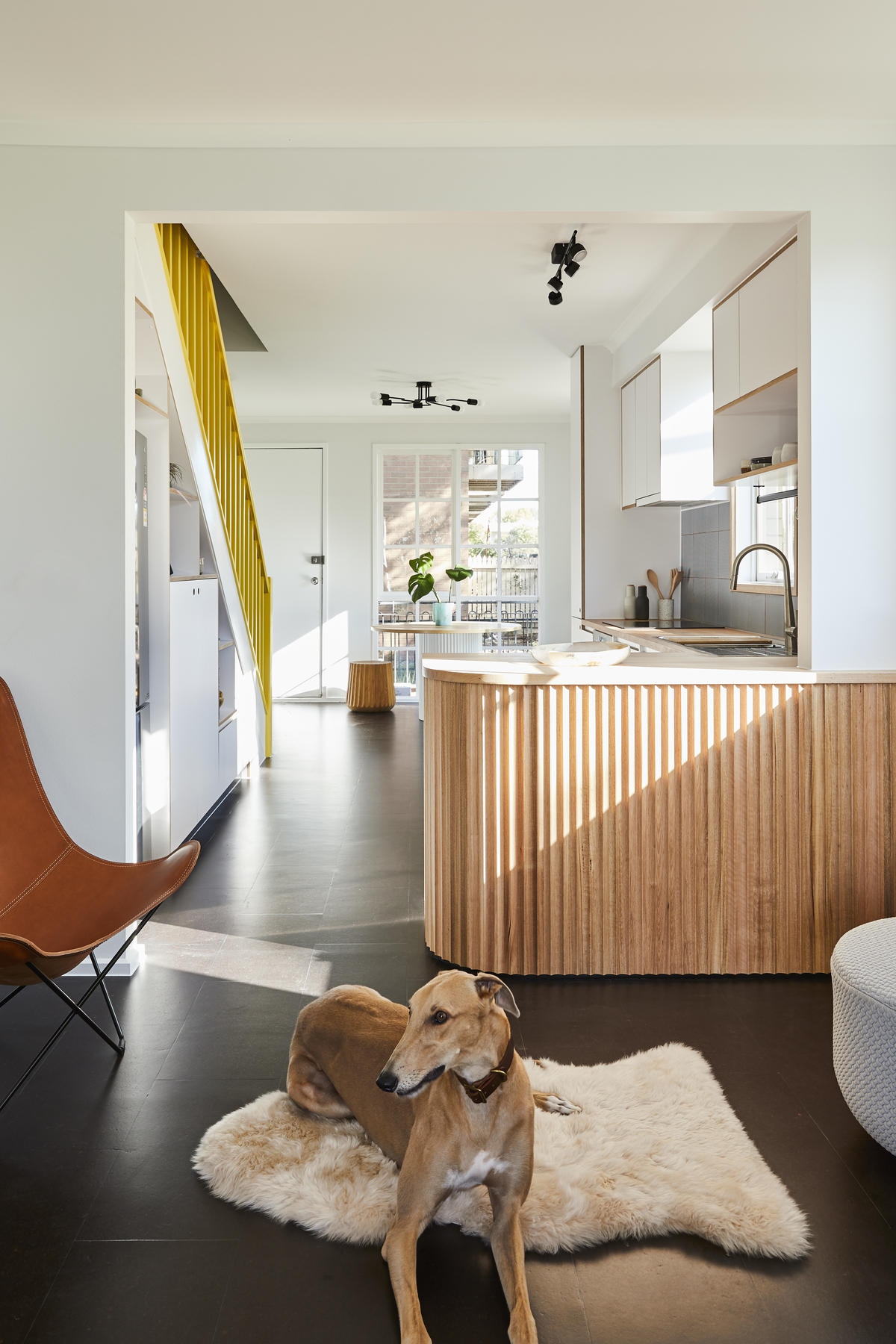 Tired and dated, no more. Thanks to the thoughtful and targeted revamp by Circle Studio Architects, Apartment on Ballarat is now the perfect home for this young couple and baby on the way. 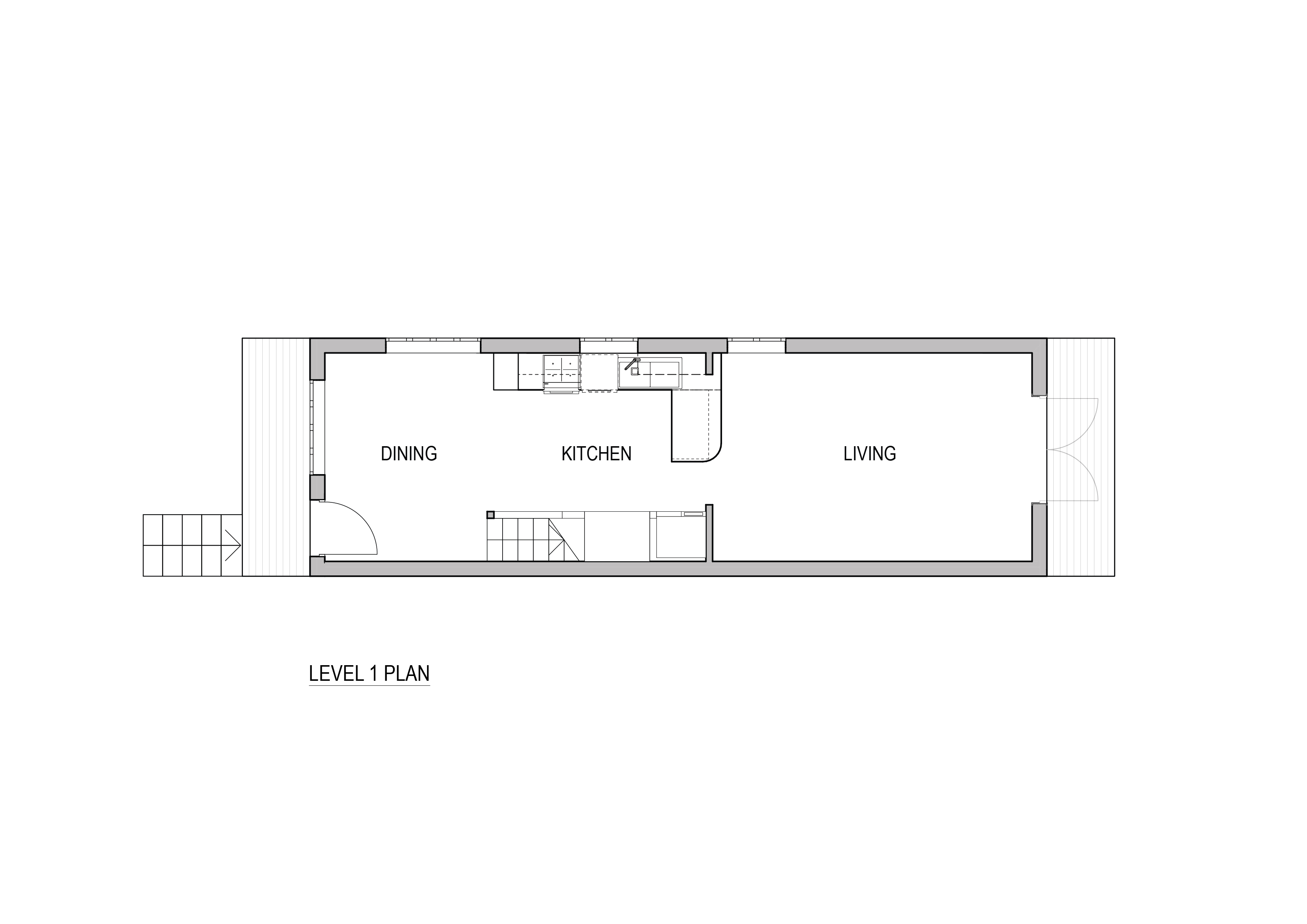 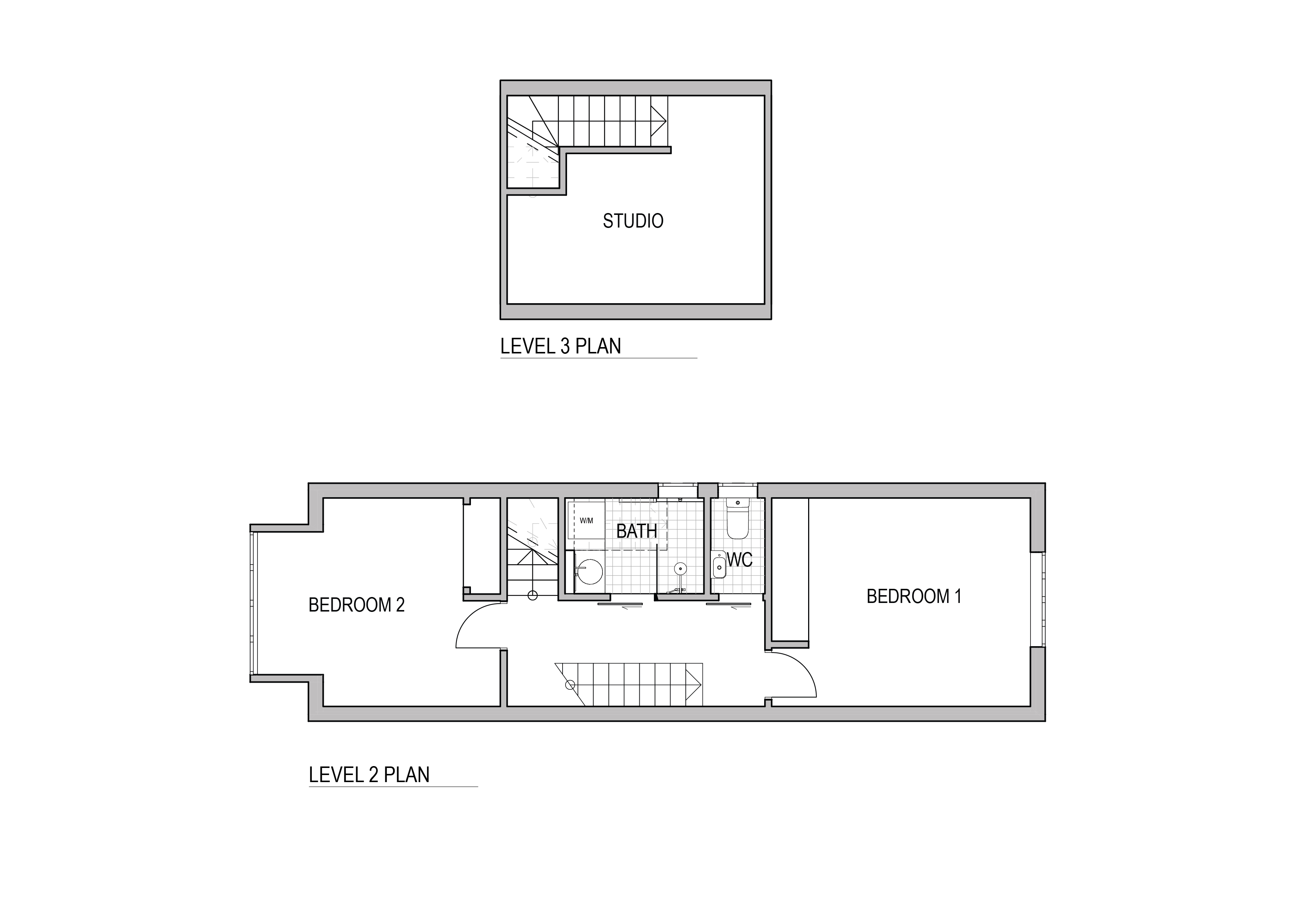 Tell us what you love about Apartment on Ballarat...