You'd Never Guess What's Behind This Facade (But That's the Point)

From the street, you'd never realise what's happening behind this heritage facade, but that's the point. 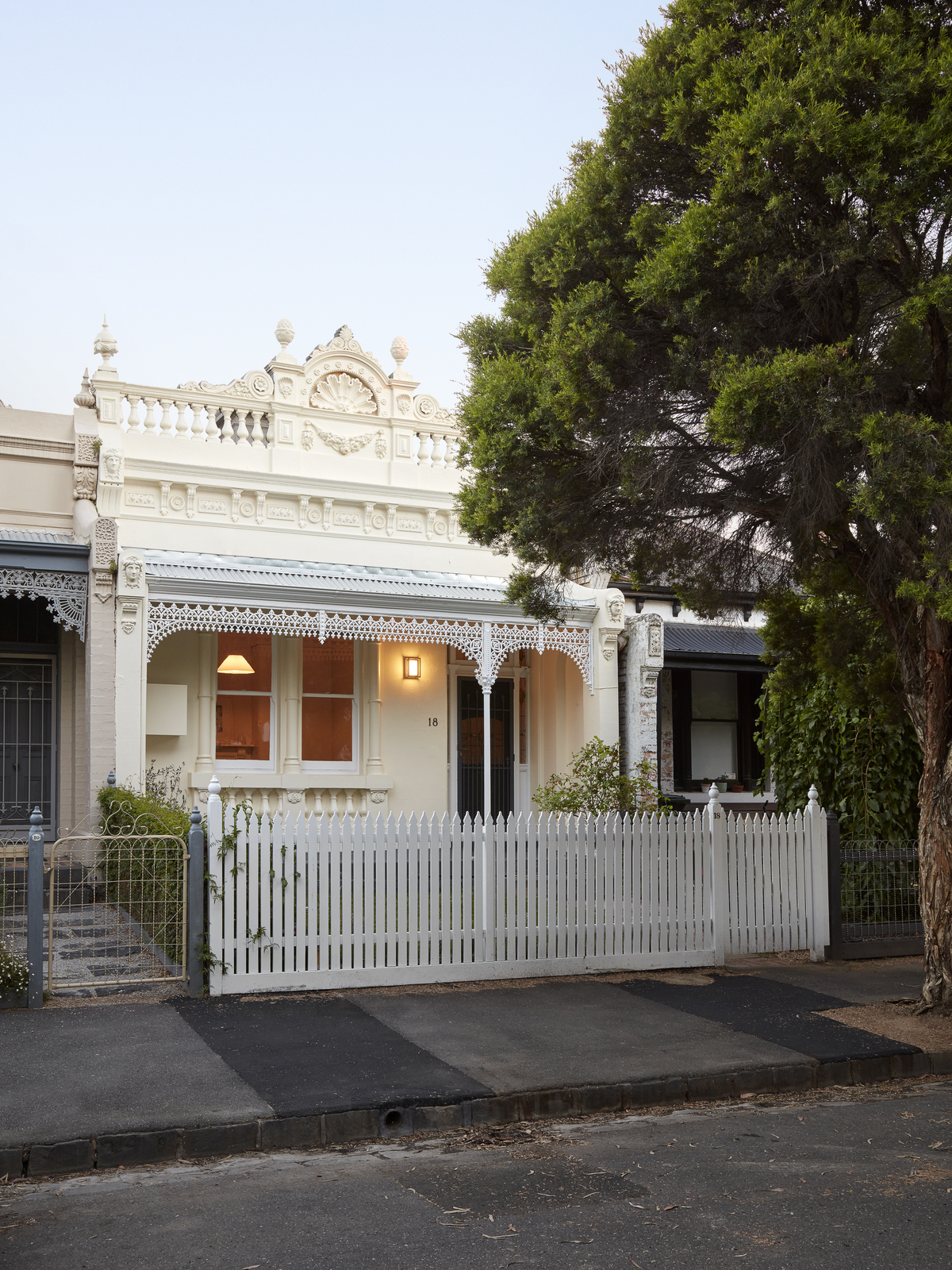 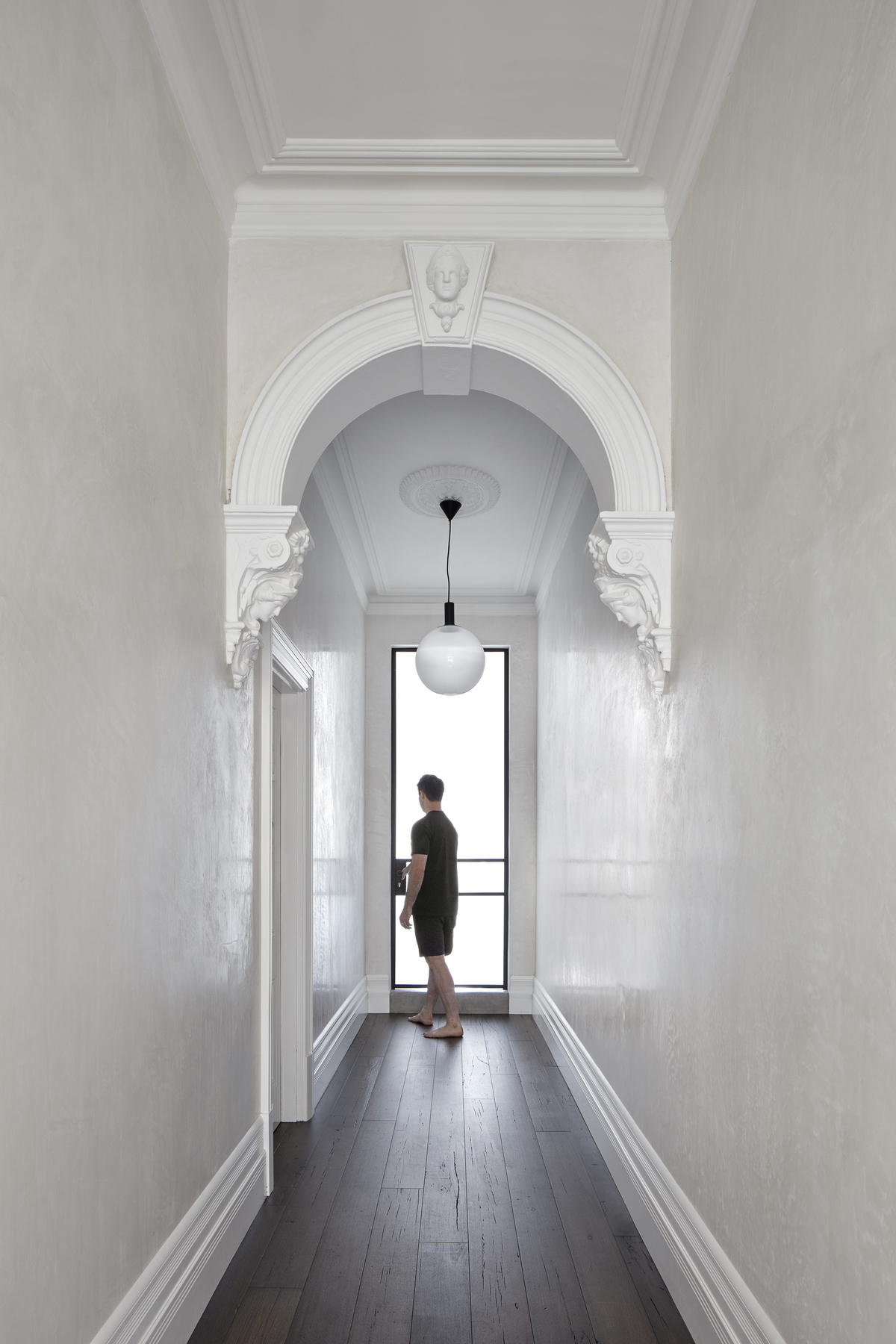 In heritage areas like Melbourne's Fitzroy North, maintaining the streetscape is an important part of the planning regulations. That's why the council was hesitant when MMAD Architecture proposed creating a two-storey addition at the rear of this home and removing the original roof to create a new roof deck. Ultimately though, with the help of 3D models and a healthy dose of diagrams, the council agreed to the addition and the surprise roof deck. And it worked: unless you're up on roof terrace yahooing to a friend on the street, a passerby would be none-the-wiser. 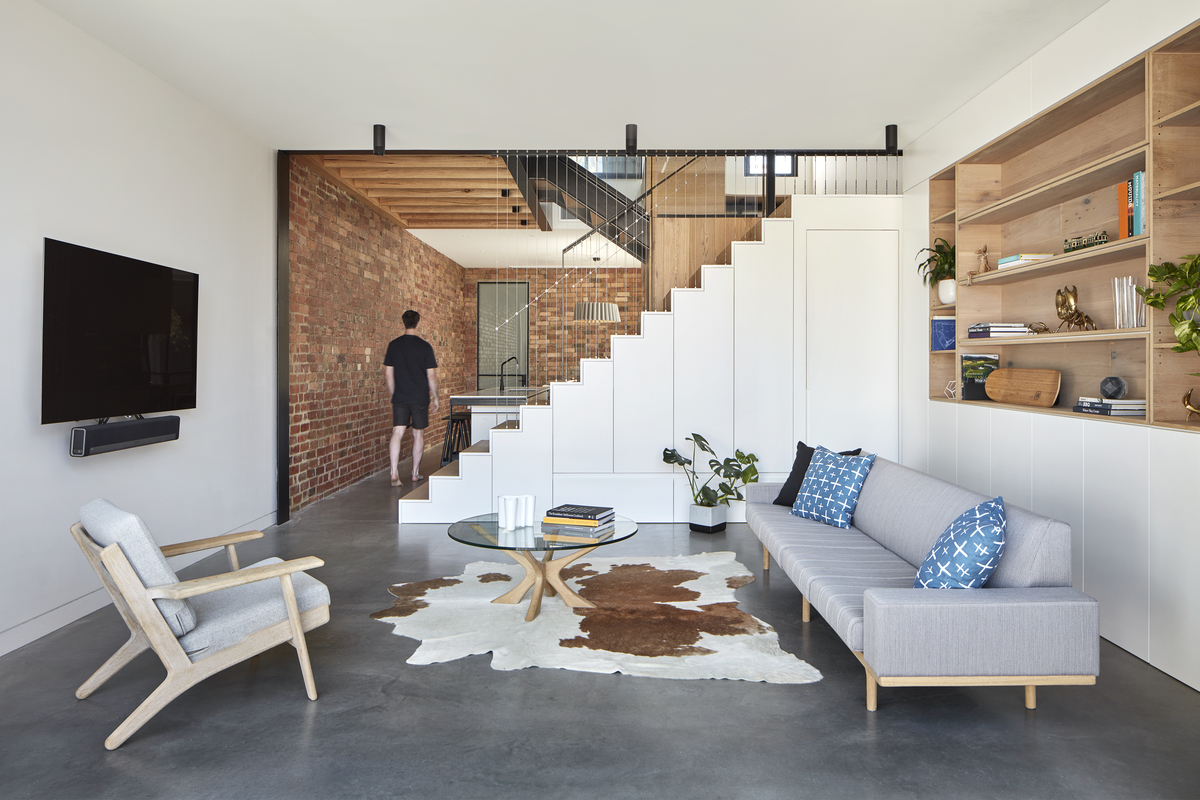 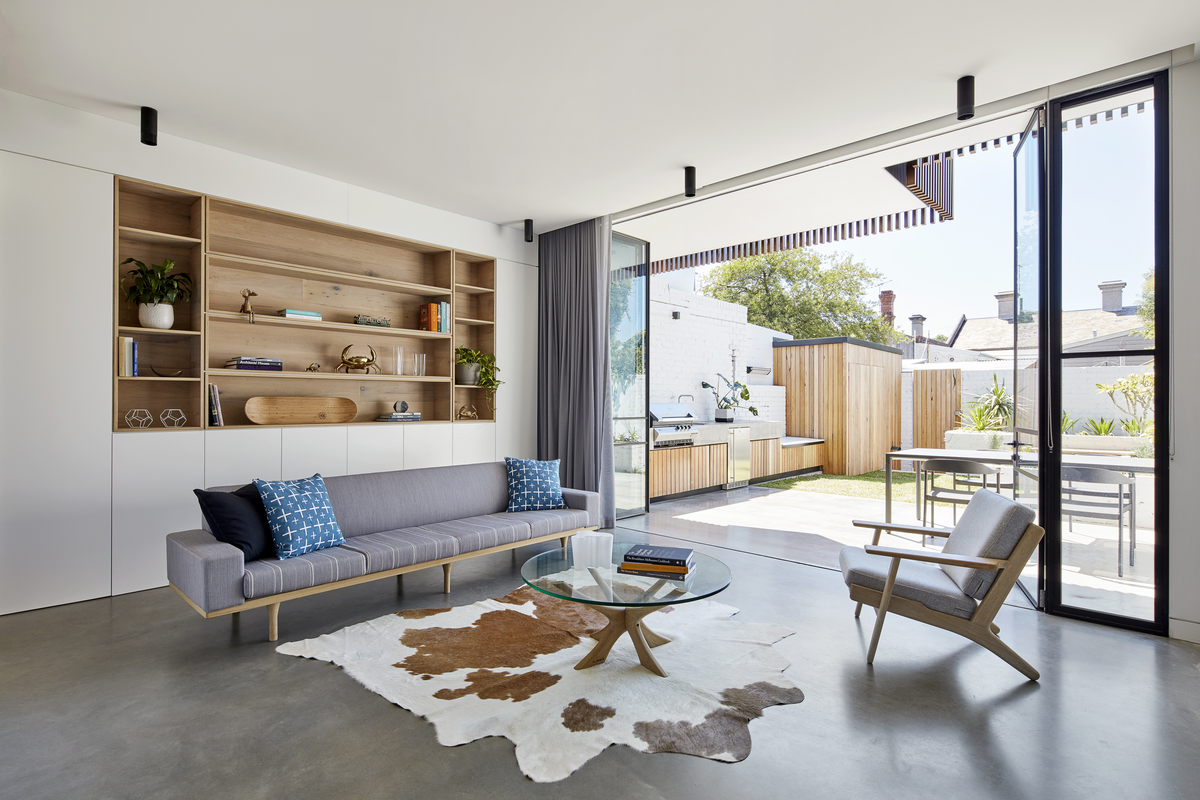 An important part of this renovation was removing an 80s addition at the rear which took up much of the back yard, had an awkward layout and, with a much lower ceiling height, felt out of keeping with the rest of the house. By removing the existing addition and designing a new two-storey addition, the architect was able to reclaim some precious backyard space which is harder and harder to come by in inner-city suburbs like this. 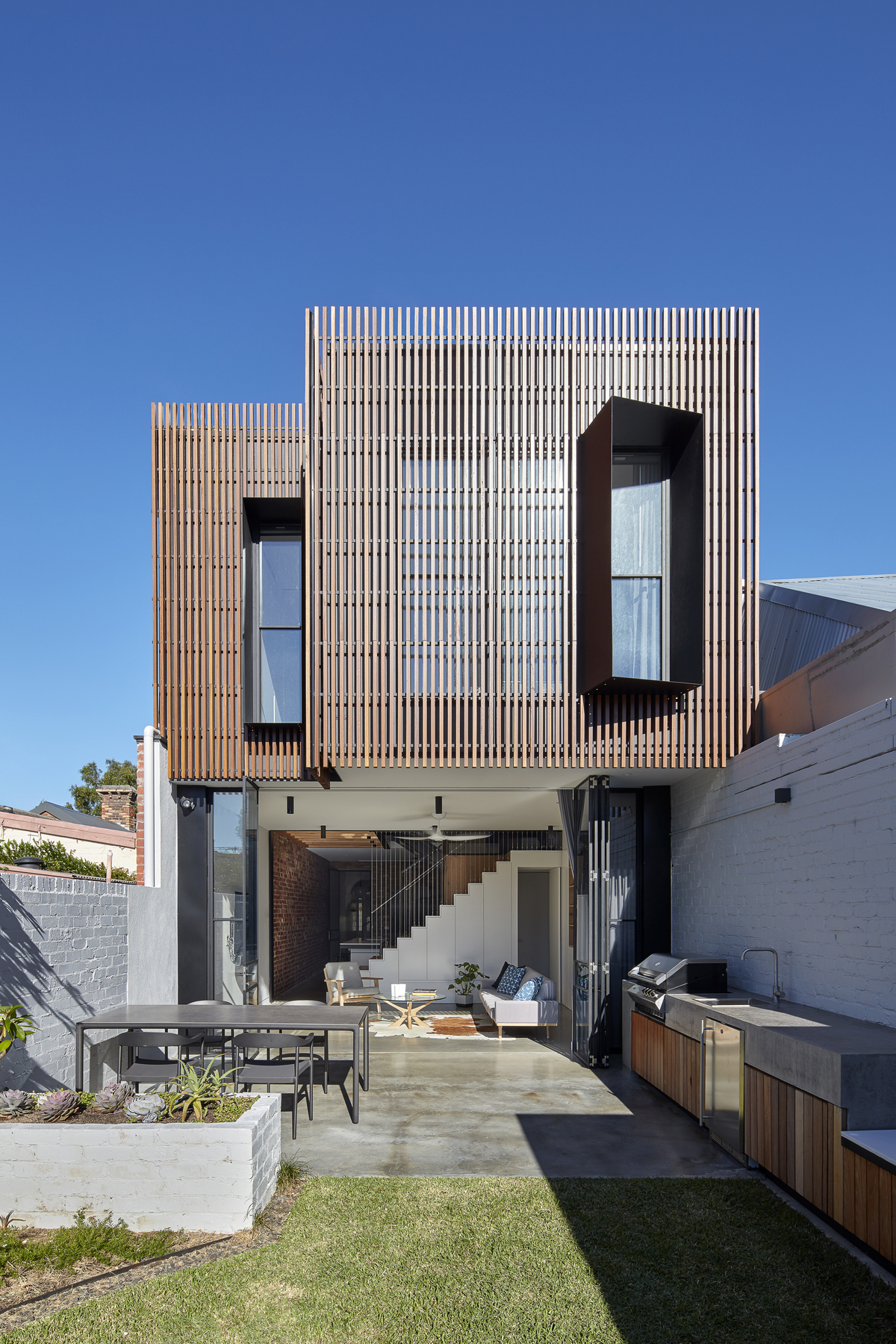 The new ground floor spaces have a similar ceiling height to the original home, giving them a much grander sense of space. To ensure you can't see the addition from the street, the second storey is pushed towards the rear, overhanging the ground level enough to provide sun and rain protection. This allows the ground level to open completely to the outdoors with a new barbeque and outdoor dining area in the space where the house used to be. 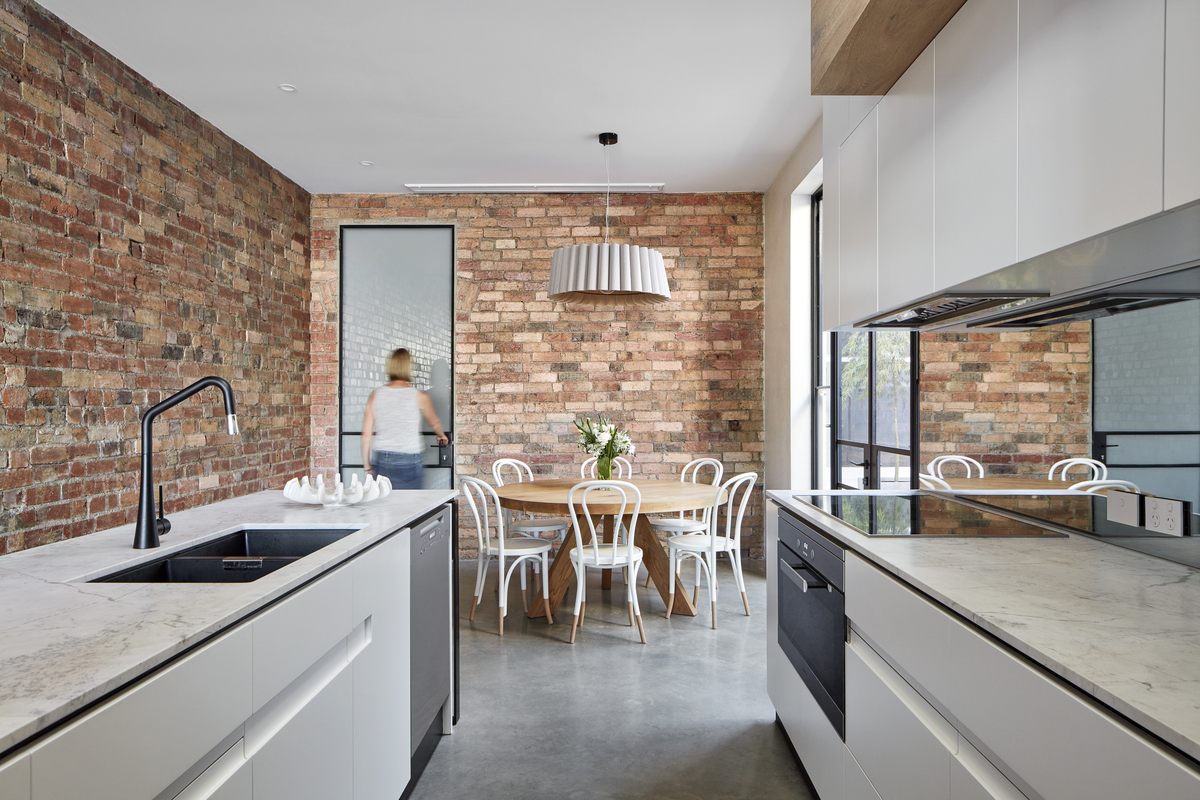 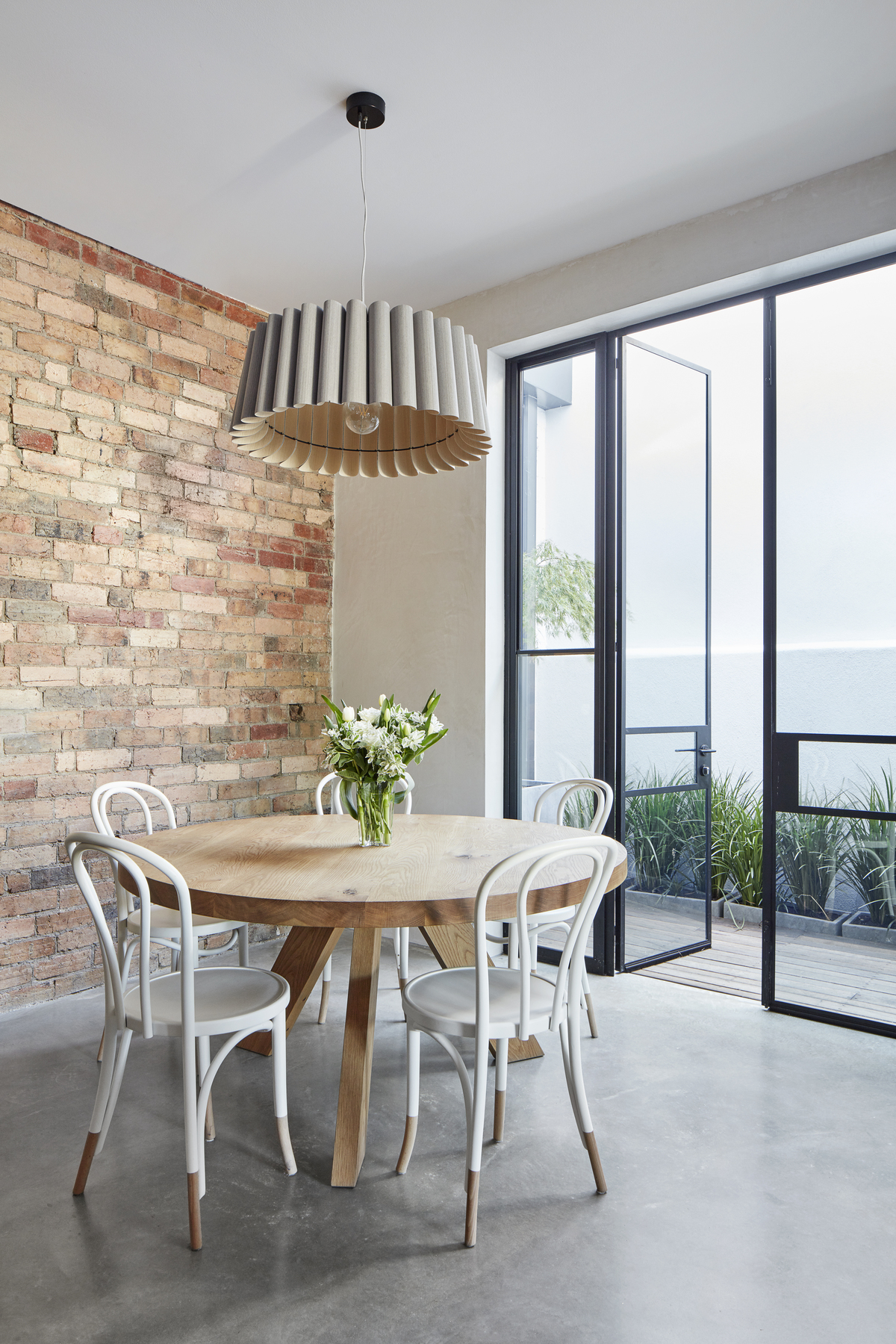 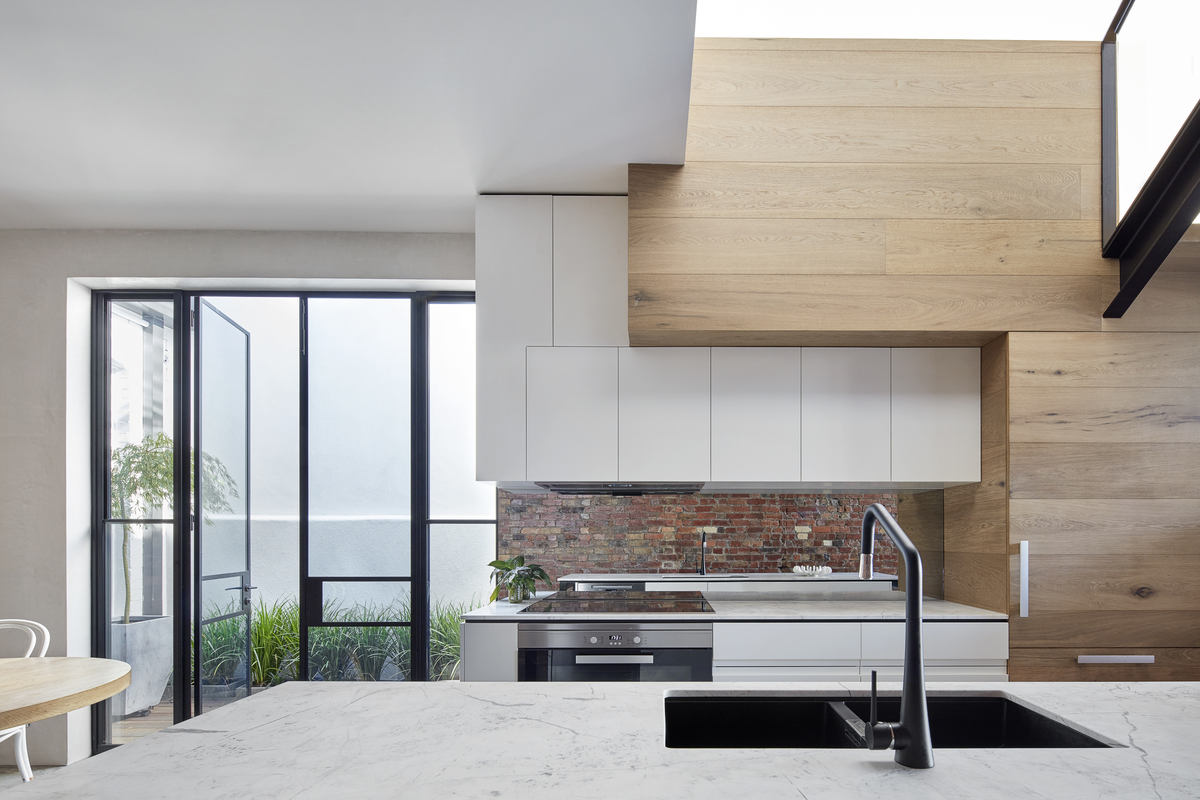 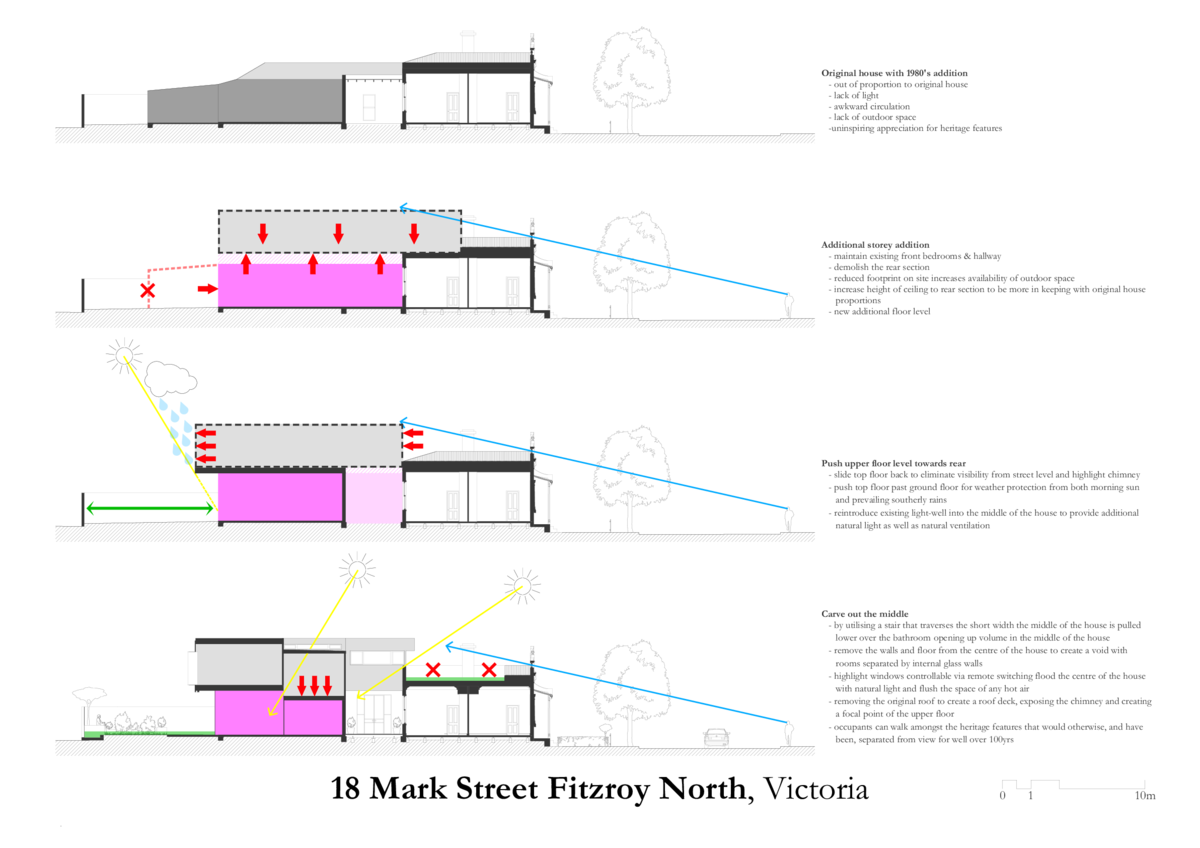 Another clever move was to bring back the lightwell at the side of the house and 'carve out' the centre of the home to let in light and air. This allows the kitchen and dining area to enjoy reflected light despite being in the centre of the home. Perhaps carving out sounds aggressive, but it's quite literal in this case: removing the hard plaster to expose the original brickwork which had been concealed for over a hundred years. Similarly, by lowering the ceiling height over the central bathroom and using glass partitions and a void over the stair, the centre of the house is flooded with natural light, dramatically transforming the sense of space in the home. 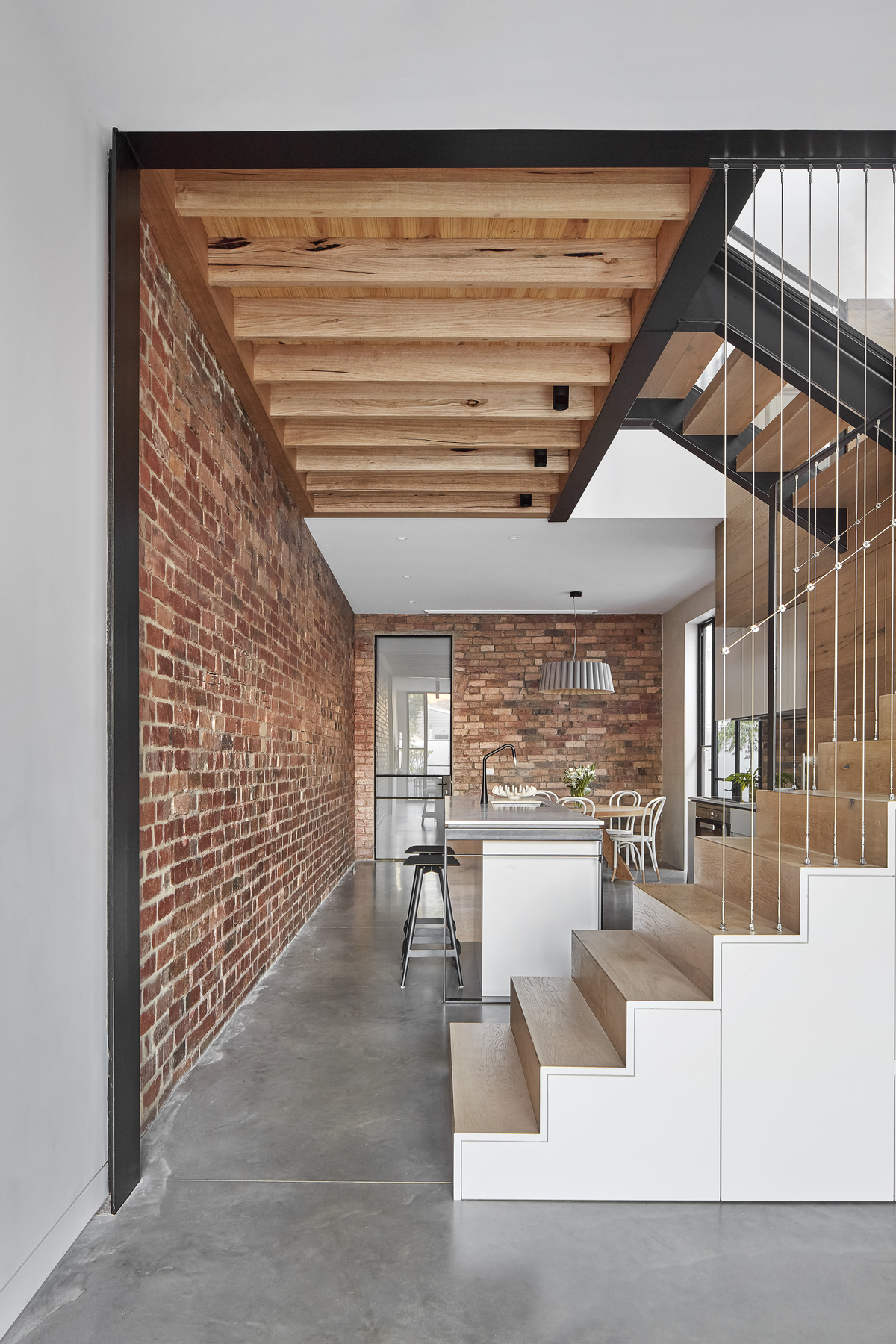 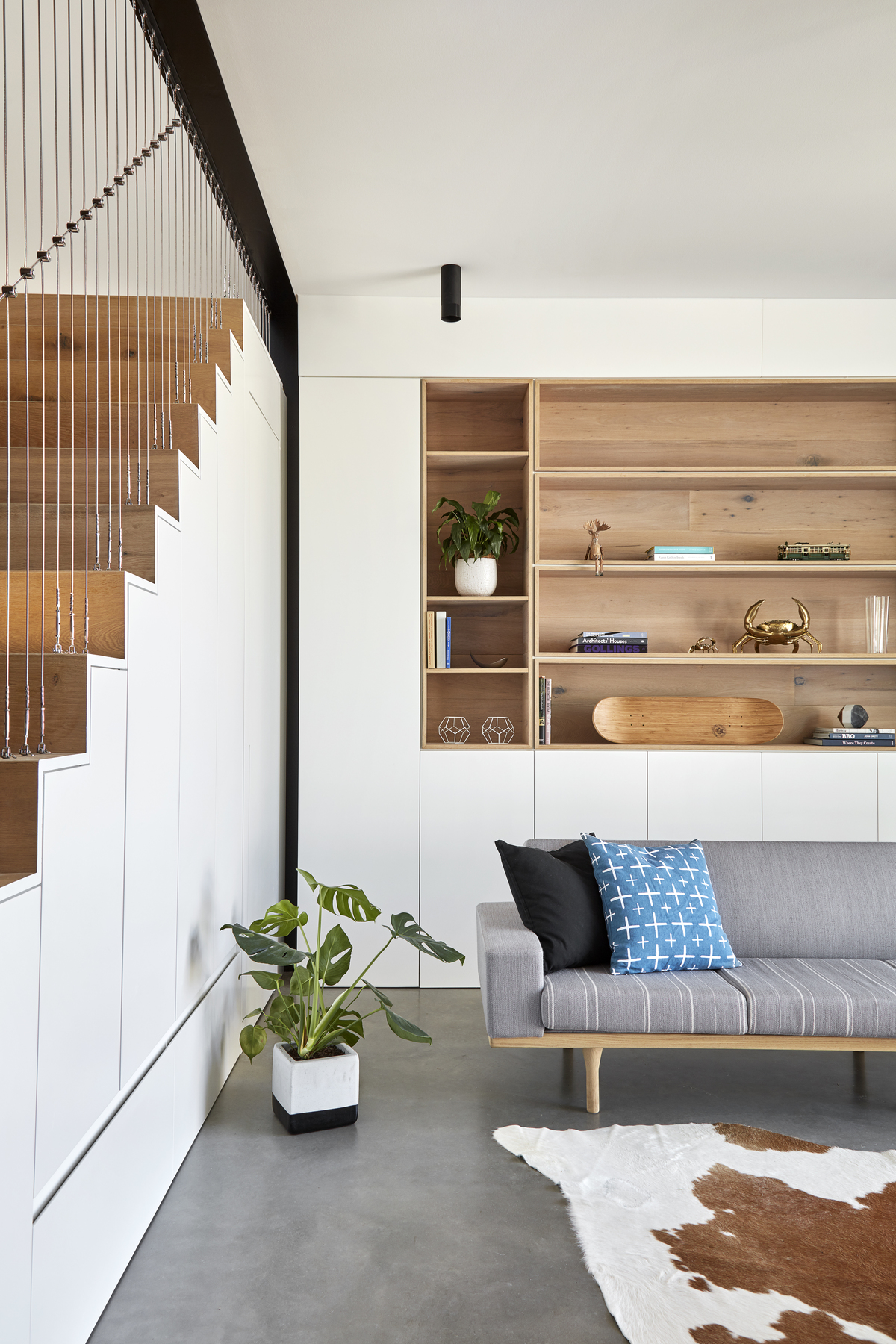 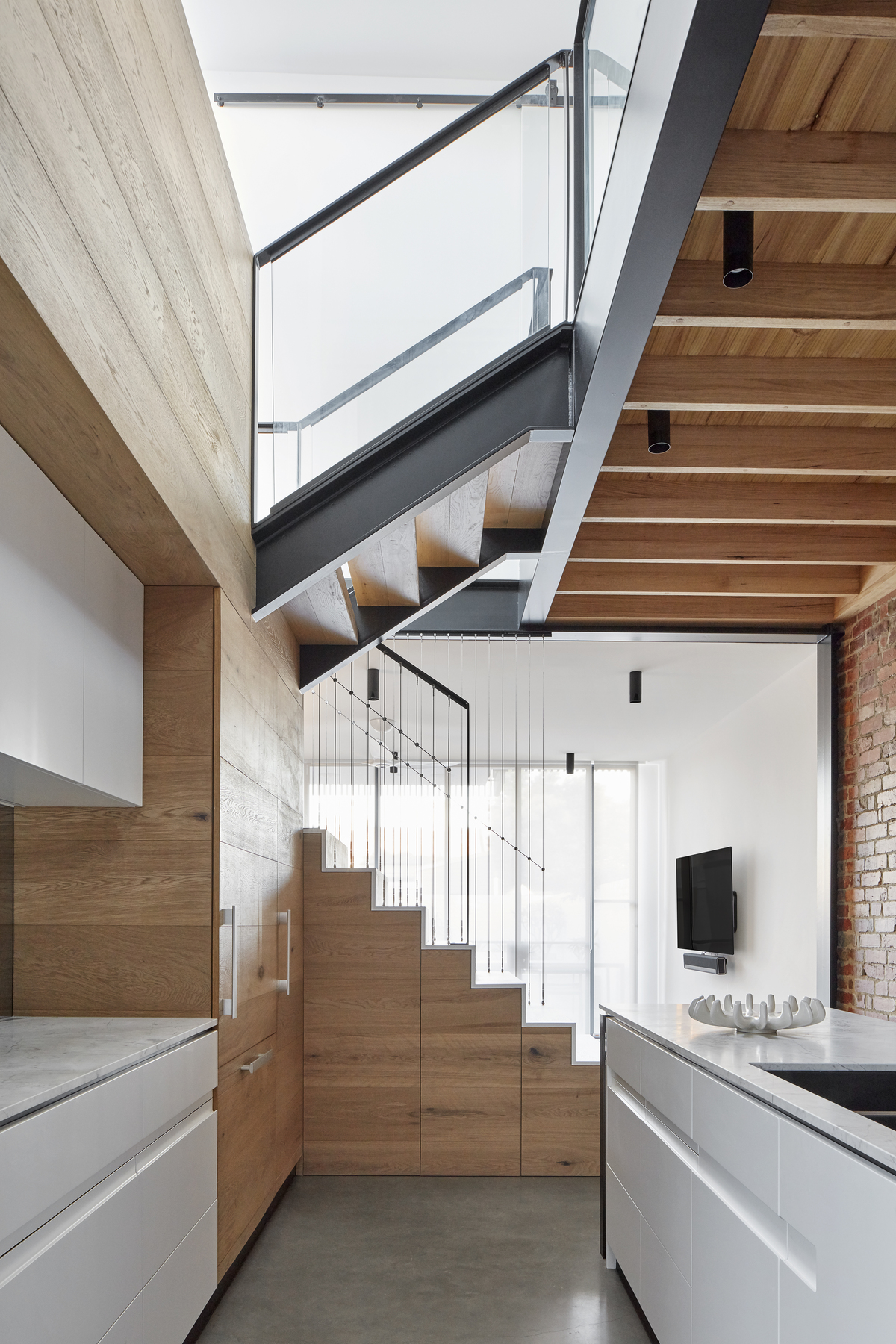 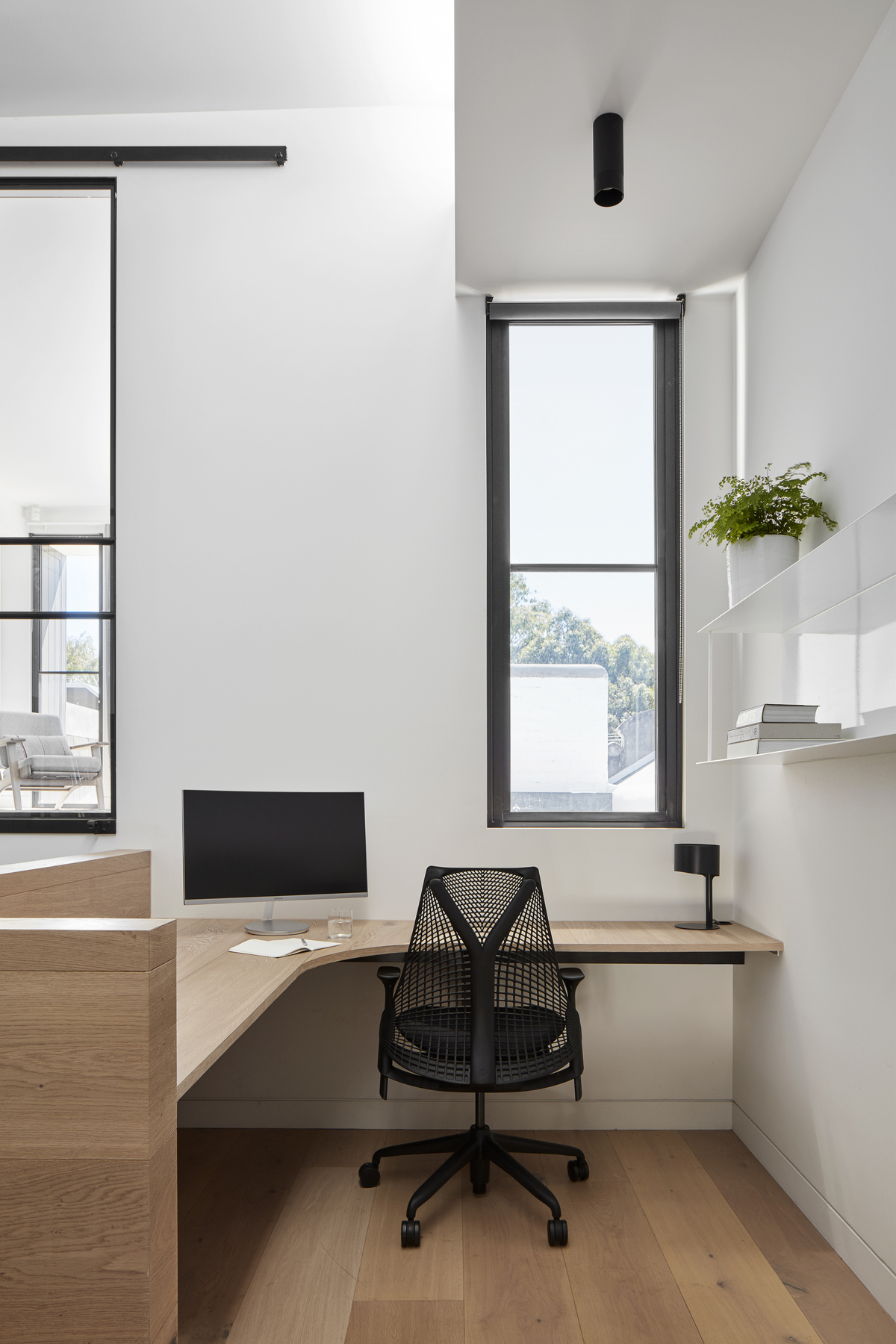 The central stair runs perpendicular to the house which means it acts as a room divider and storage on the lower level and allows rooms to enjoy the full width of the site. A study makes use of the landing to create a space that is slightly separate from the calamity of family life downstairs, but you can still keep an eye on the kids. 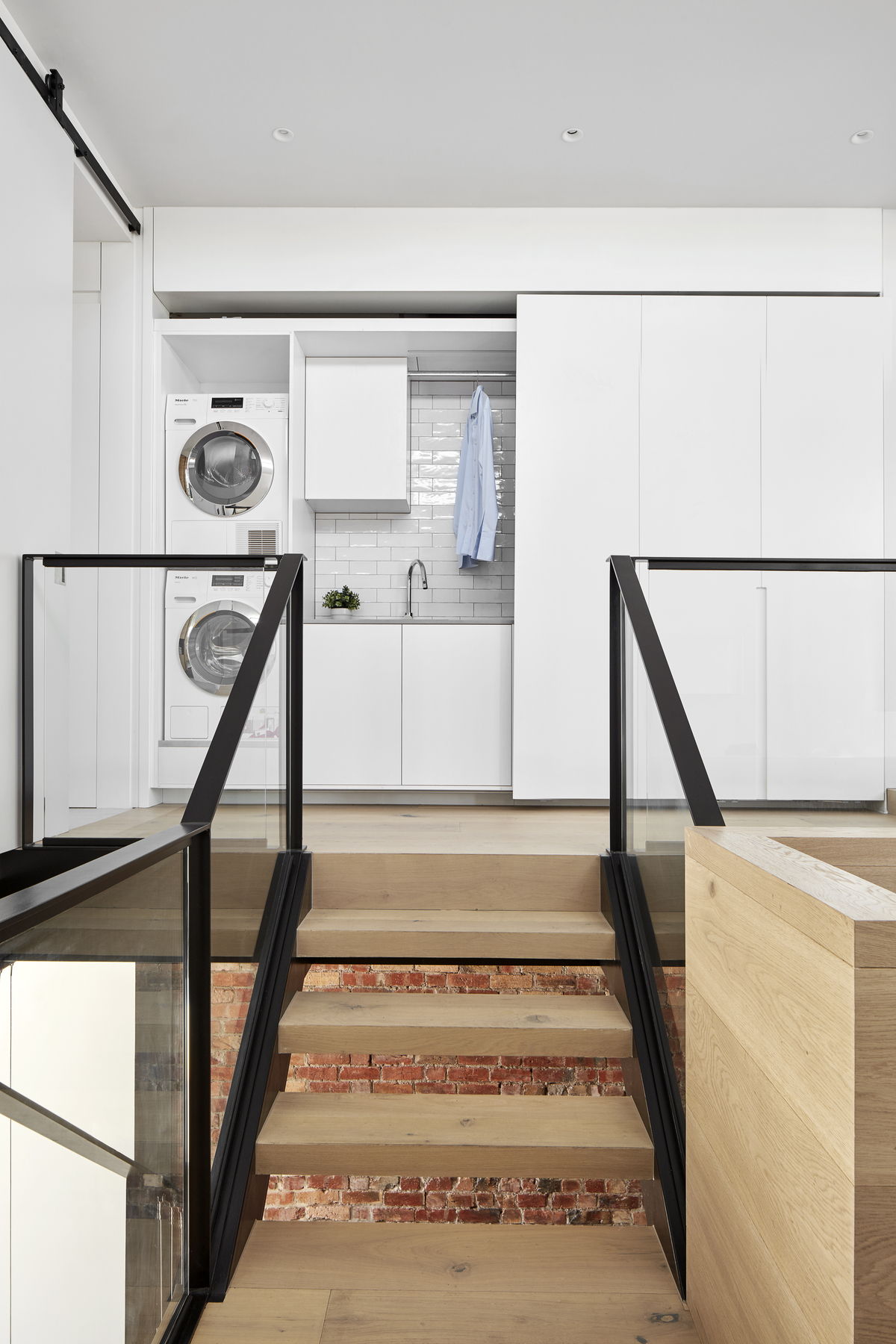 At the top of the stairs the laundry is sneakily concealed in a wall of cabinets, providing a neat and tidy solution in minimal space. 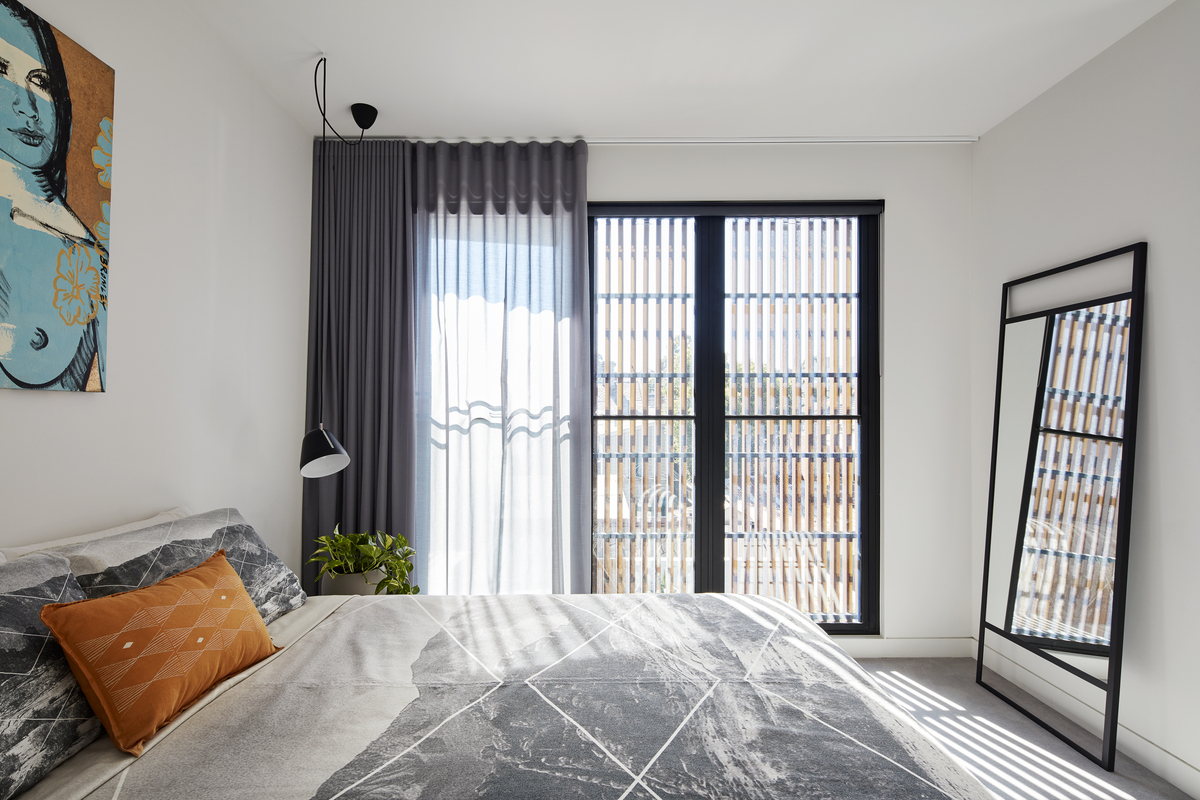 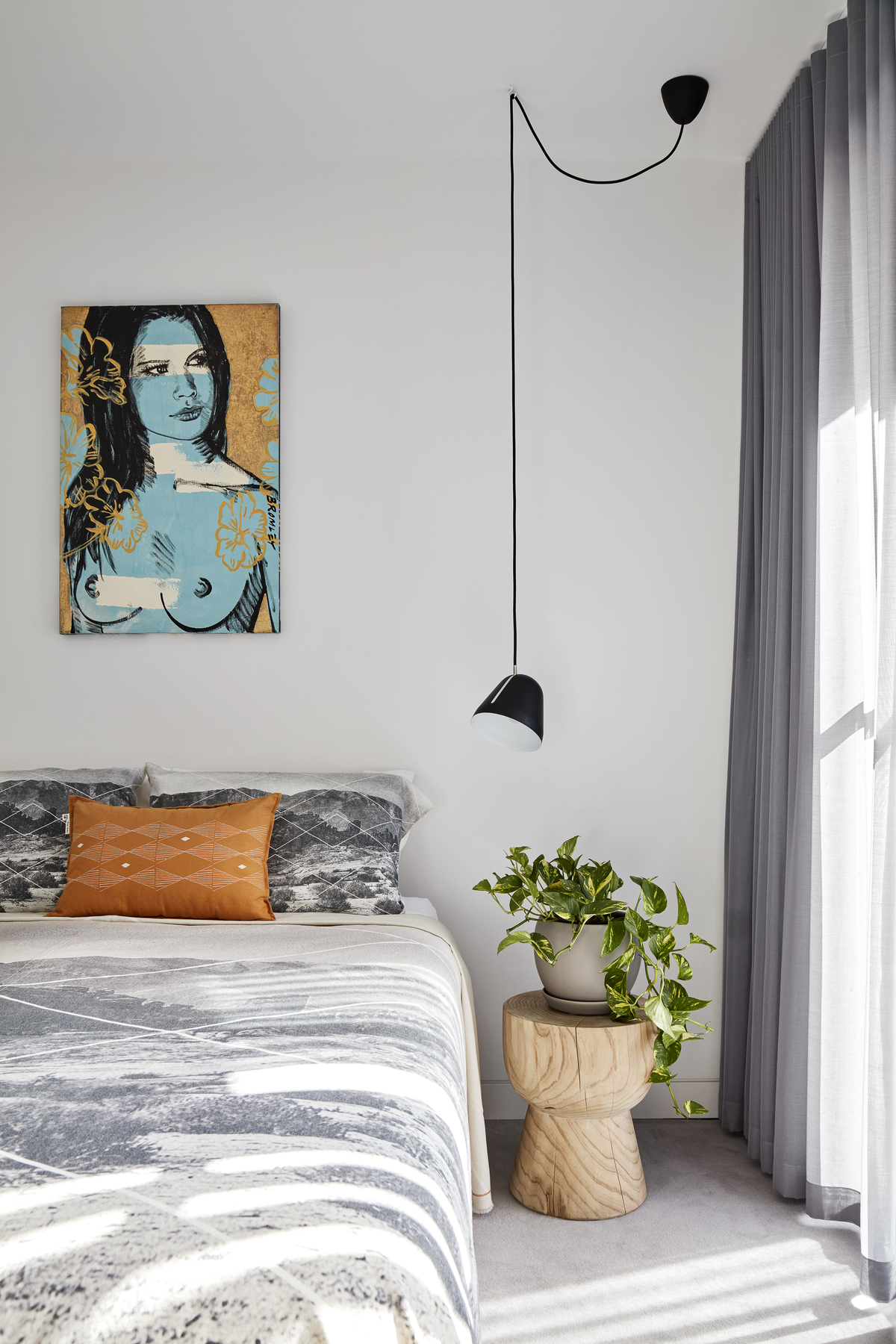 The main bedroom upstairs has carefully placed windows with screens and shields to protect both the owners' privacy, but also their neighbours. The sceen allows plenty of light into the home without creating overlooking issues. 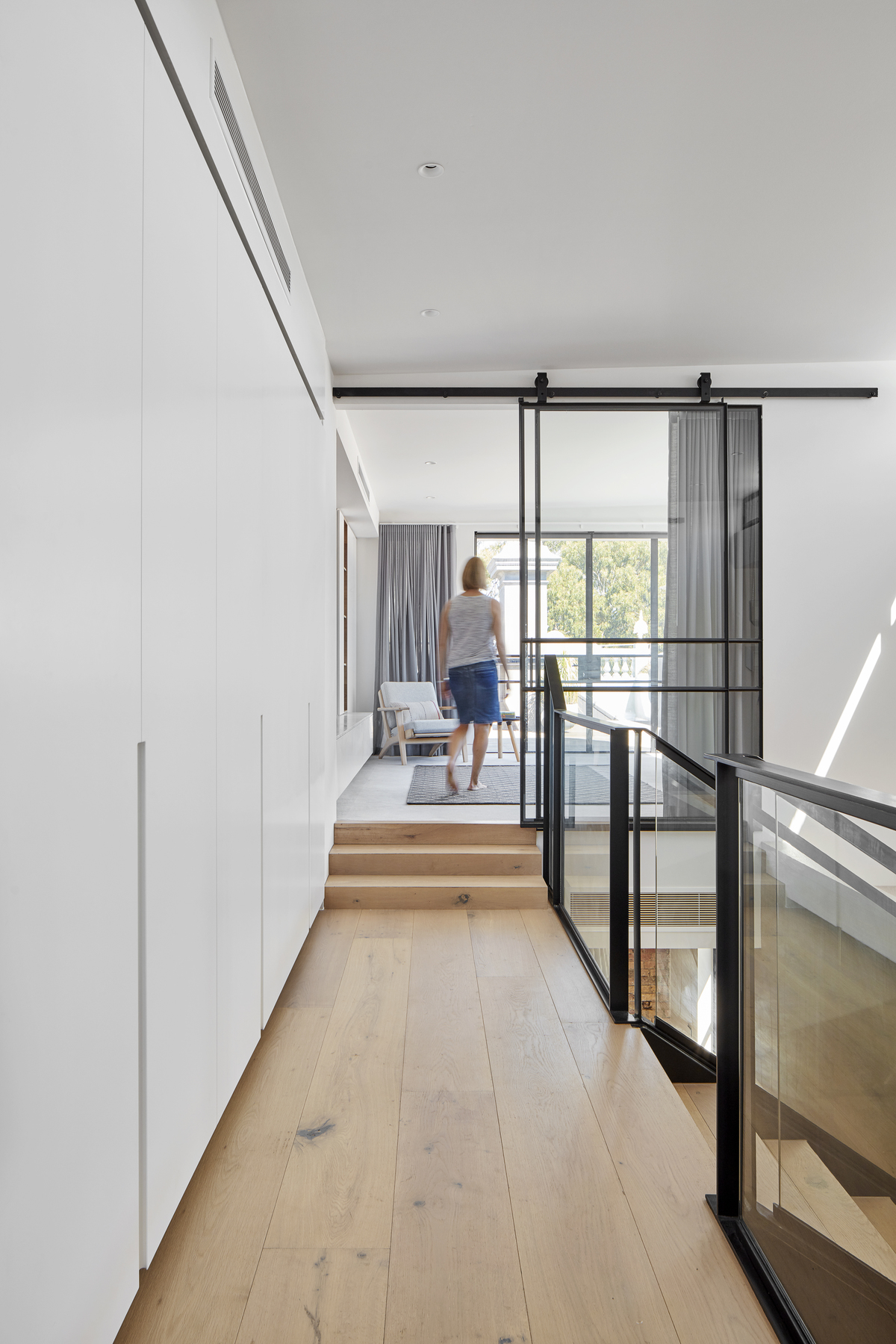 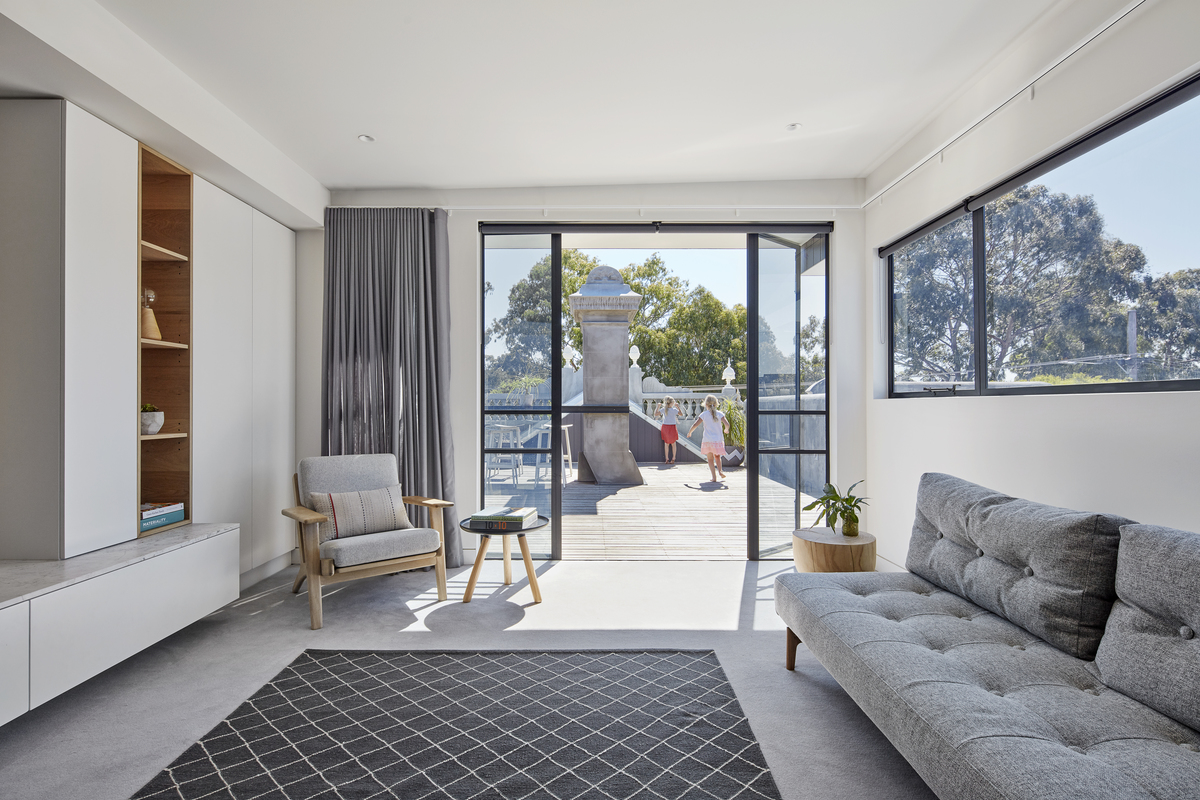 As architect Michael Montgomery explains, 'the hero of the roof deck was always the retention and restoration of the original chimney.' This was made possible by working with the structural engineer to design bar seating which also supports the century-old chimney. Plus, those glass walls in the upstairs living area means you can even catch a glimpse of the beautiful old chimney from the living area downstairs. 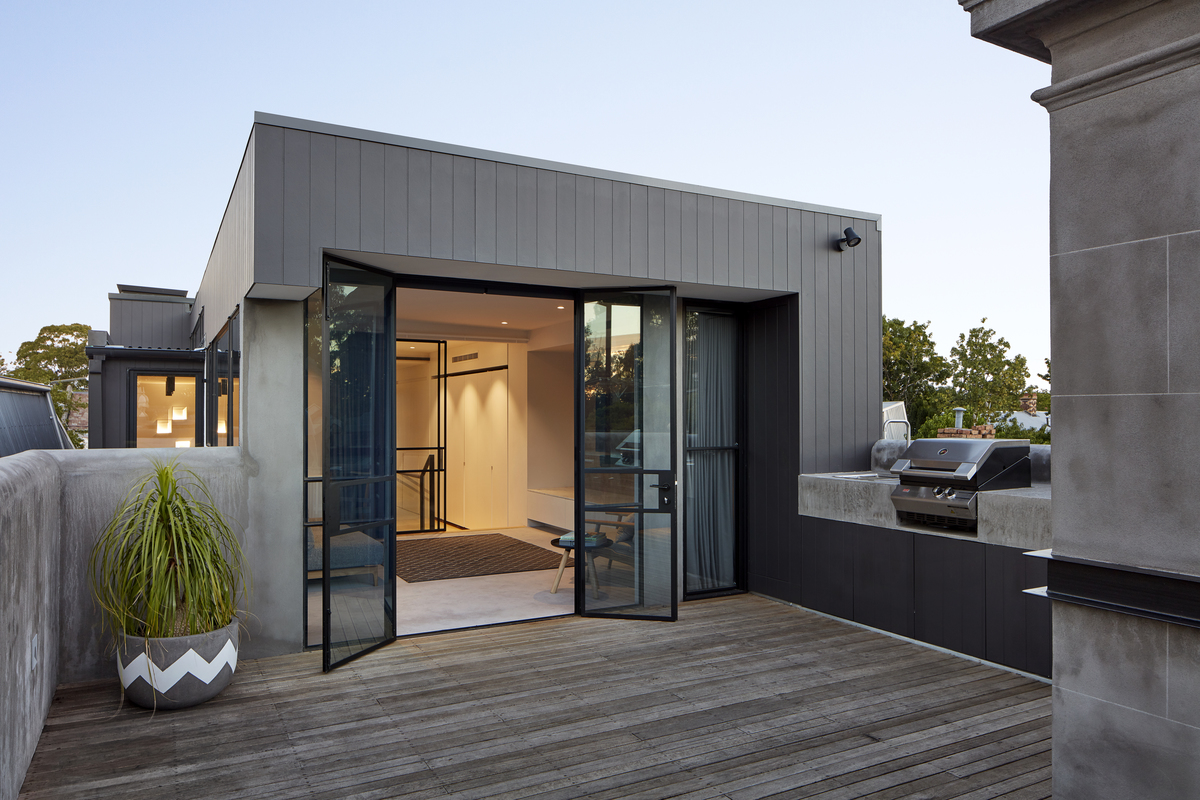 The roof deck creates a separate outdoor entertaining area with beautiful views over the neighbourhood and a sense of seclusion, hidden behind the home's facade. Almost the same size as the home's backyard, this new outdoor space is a valuable addition to the home. It's also a way to enjoy the period features of the chimney and facade from a new perspective. The clients had said, 'we love the chimney but we never get to see it', now they get to enjoy the chimney up close and personal. 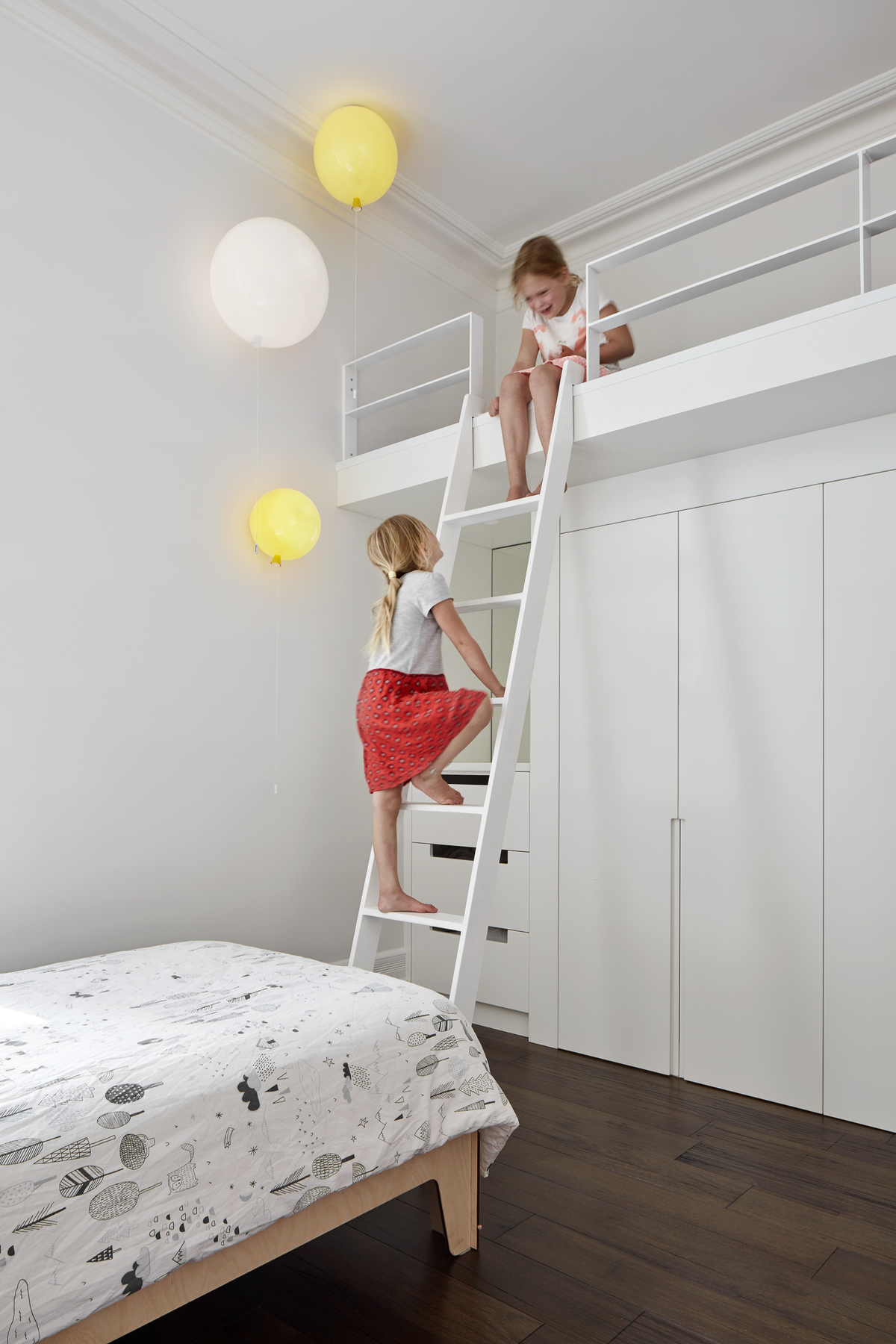 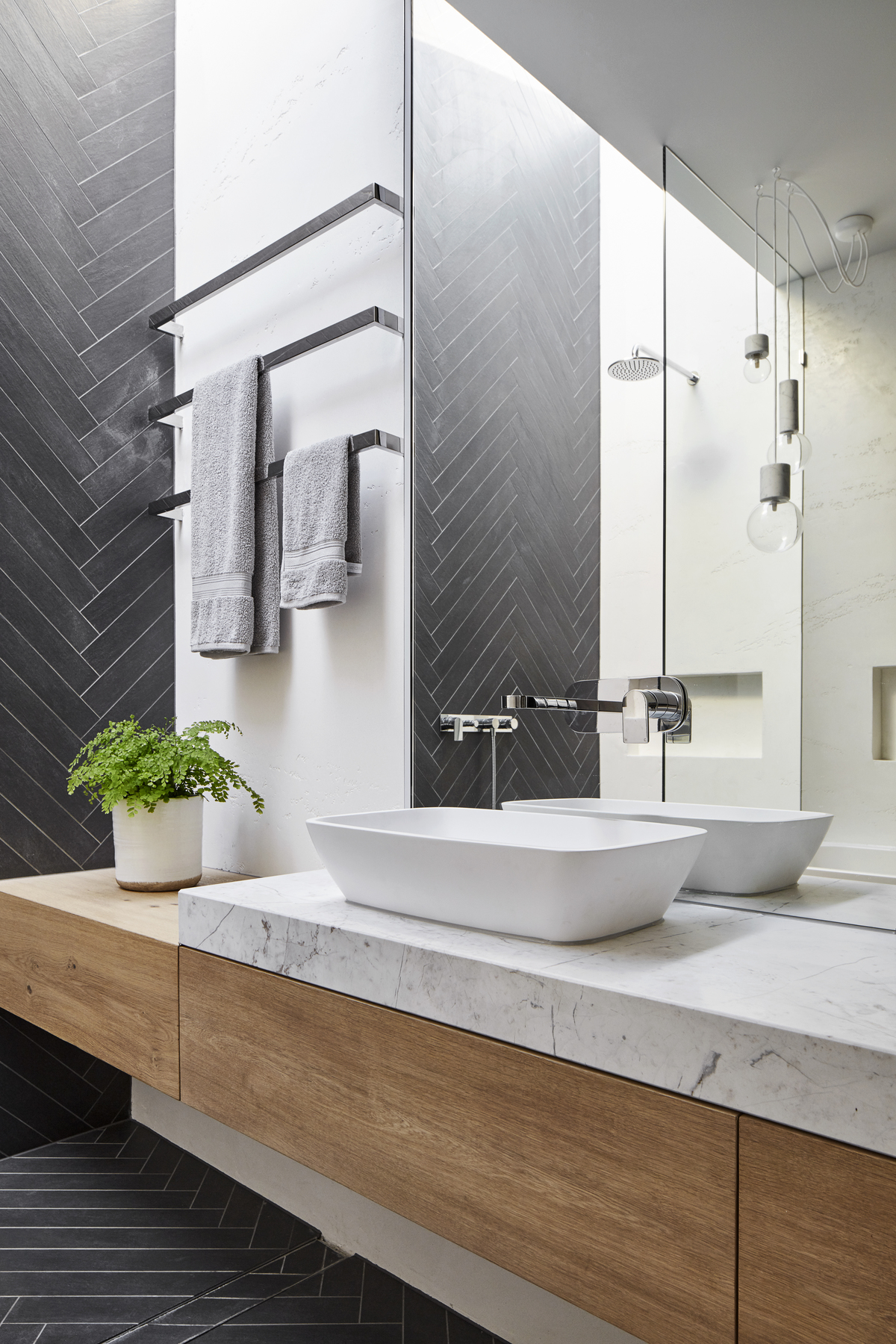 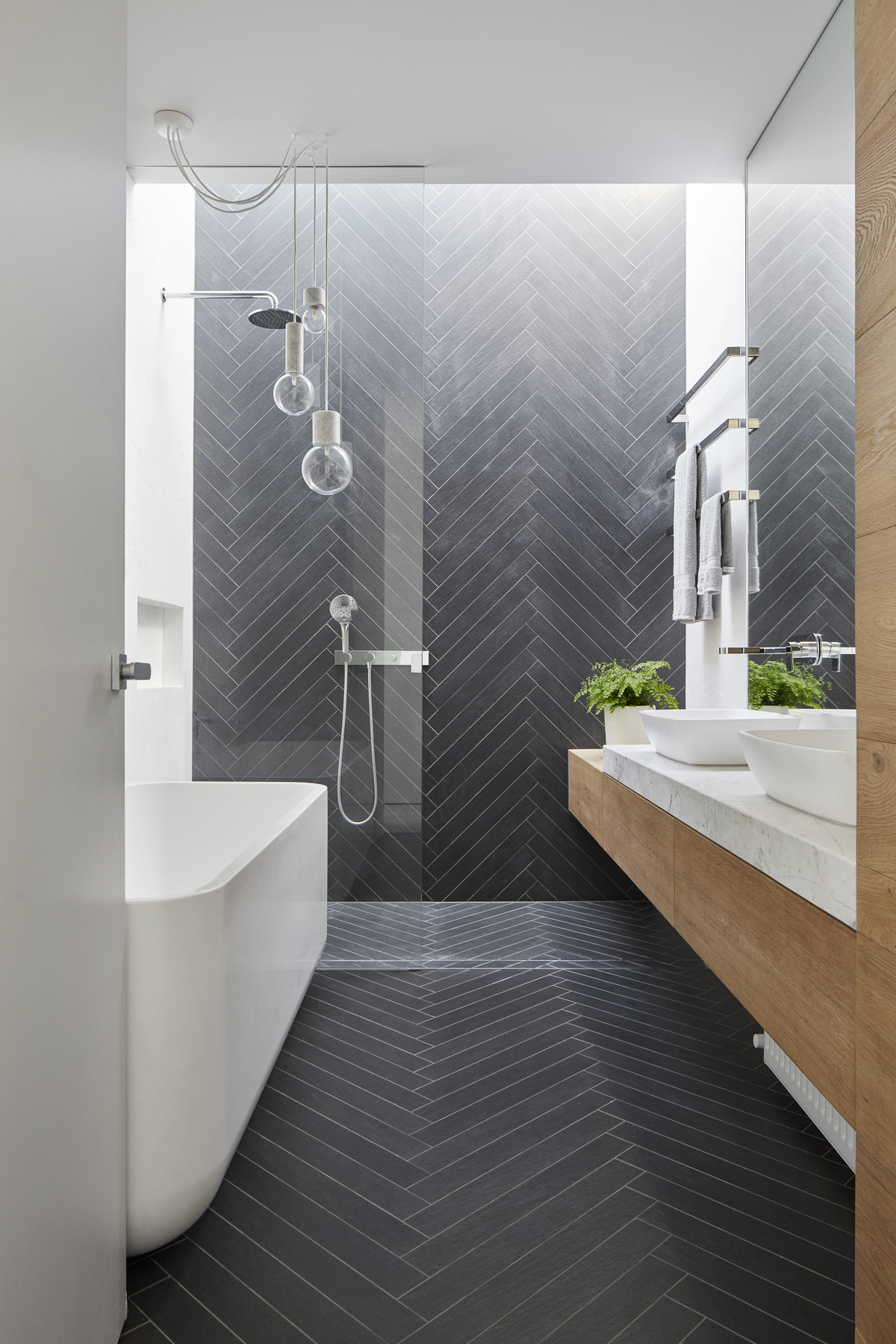 Fitzroy North House creates a spectacular family home on a compact inner-city site with strict heritage controls as a 'bonus'. It proves that family living can be functional and light-filled and enjoy outdoor space, even on tight sites. The project pushes the boundaries of what's possible in heritage areas as long as you're can demonstrate that your home aligns with the goals of the planning scheme. How many other roof terraces are hiding behind those heritage facades? 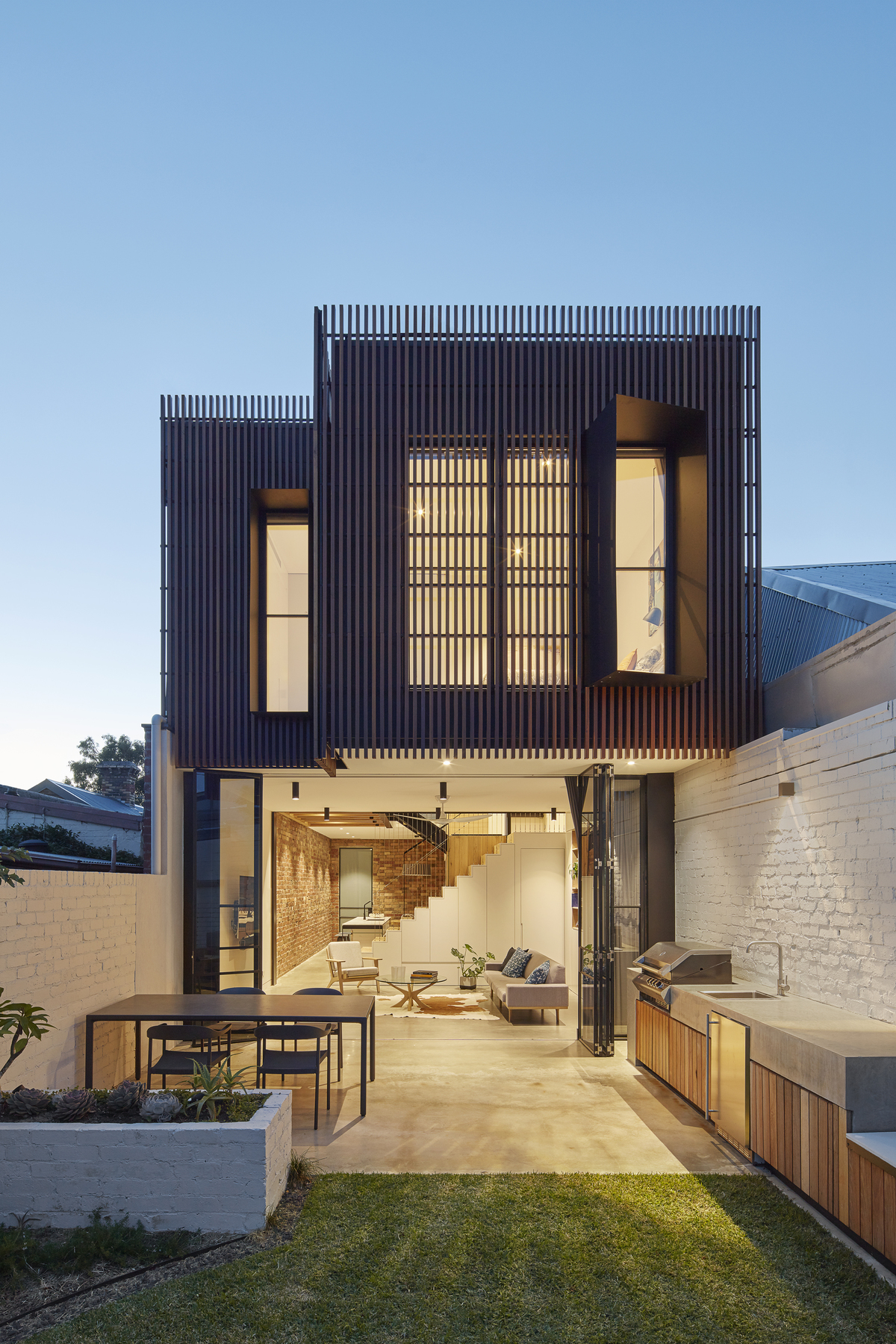 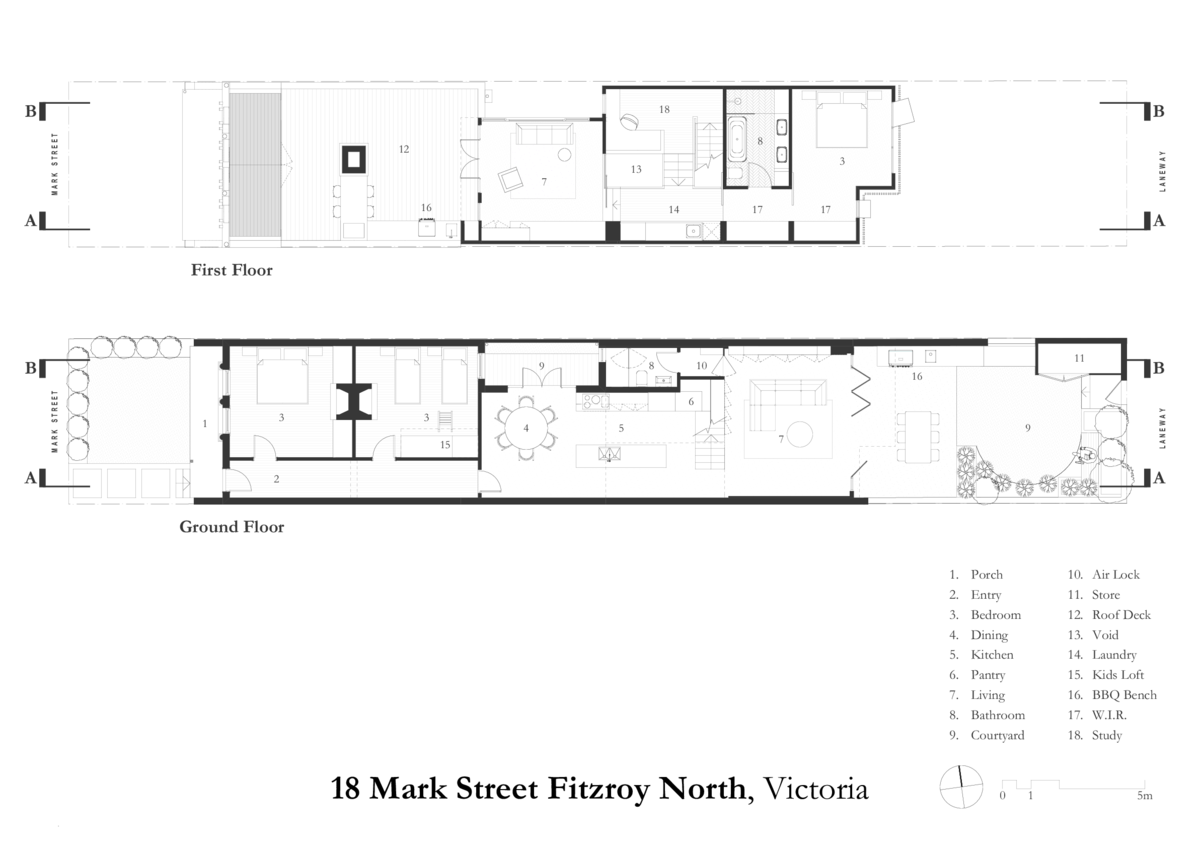 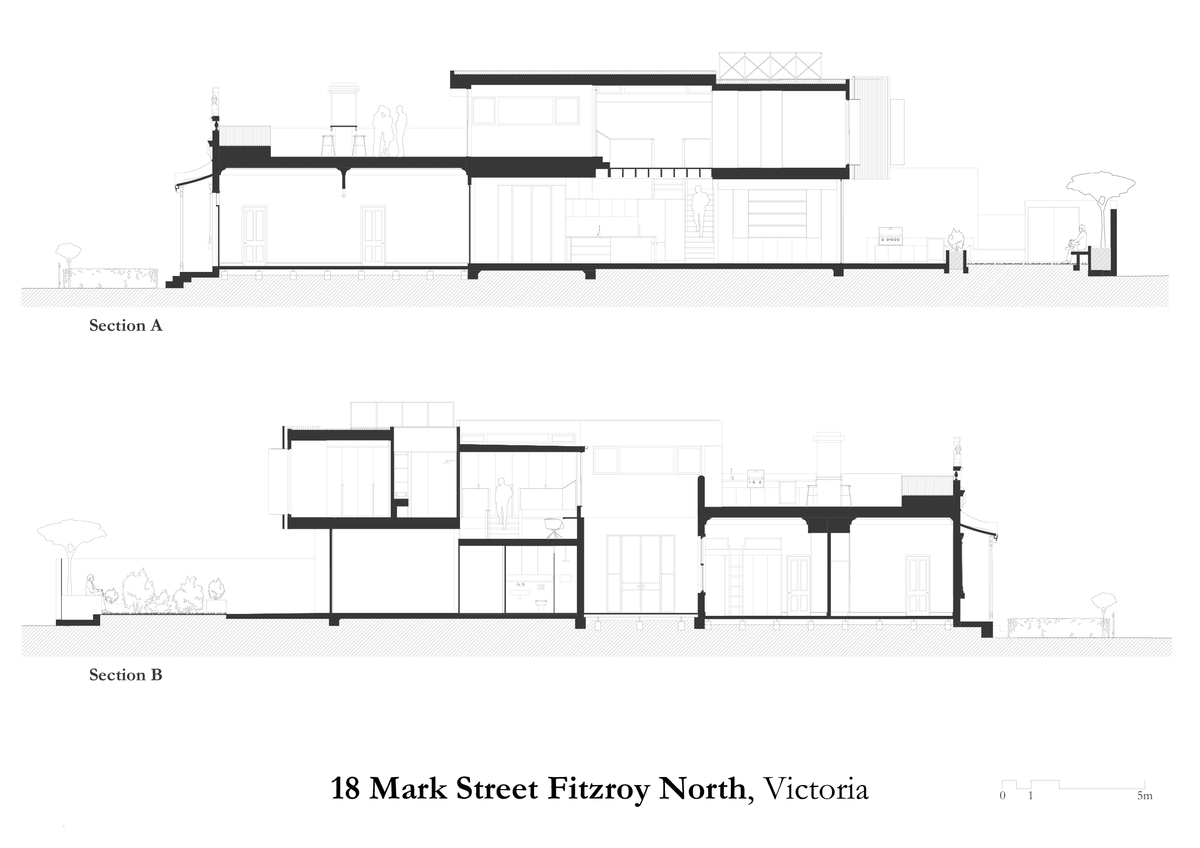 Tell us what you love about Fitzroy North House...