Forever House: A New Pavilion under the Eaves of a Suburban Home

Rising from under the eaves of a suburban bungalow in Surrey Hills, Melbourne, is a new ’nugget-like’ pavilion. Fused onto part of the house’s triple-fronted facade, this pavilion mimics and expands upon the original dwelling‘s architectural language. WoodWoodWard Architecture have created connections and disconnections are made between the old and the new, promoting a layered and evolving character. This is how to create an addition that feels at home with the original building, but is unashamedly modern. 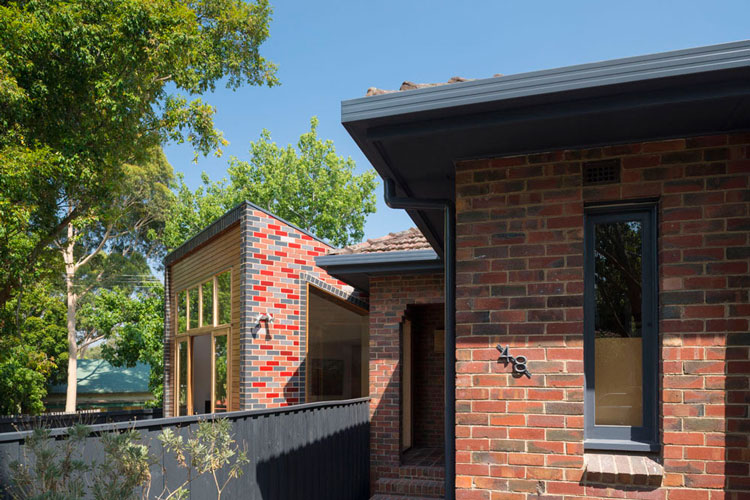 The clients’ brief was for a sustainable, flexible living space; that was contemporary, whilst fitting in with the existing context. The Forever House does this by being both reverent and cheeky, radical and conservative. 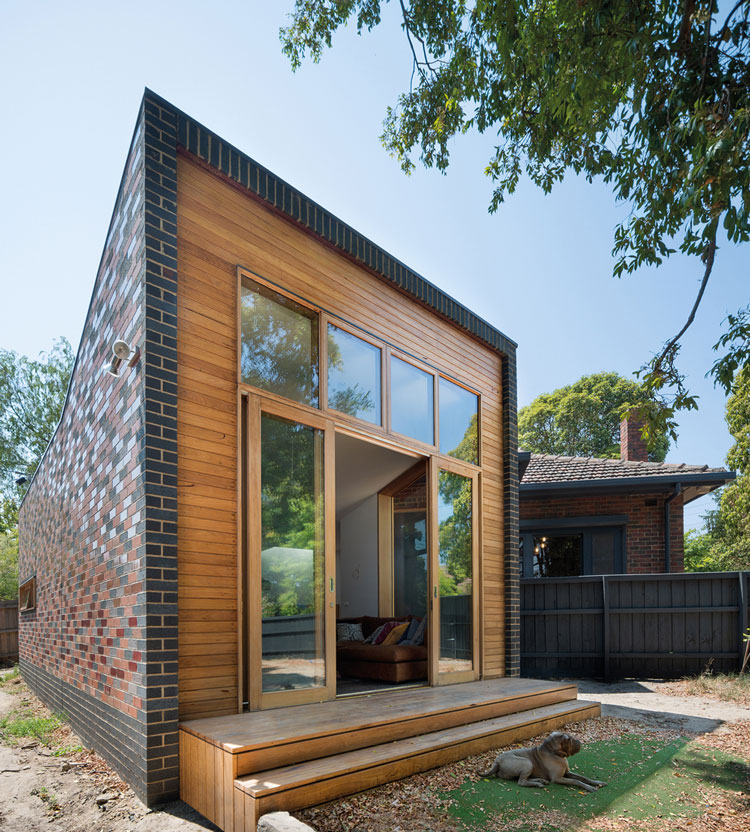 The original house is clad in a double-skin of clinker bricks. While they were commonly used throughout the 1930’s neighborhood, clinker bricks have been unpopular in recent times. They have an unusual character -- a kind of tudoresque-art-deco. Instead of spurning this humble material, the Forever House reappraises and incorporates it. The purplish, burnt bricks are laid randomly along with their matte and glazed red cousins producing an abstract, colorful fresco. On the large south-western wall the pattern is at its most powerful, taking on a decisively urban presence. The new pavilion’s materiality relates it back to the original house; but does so on it’s own terms. 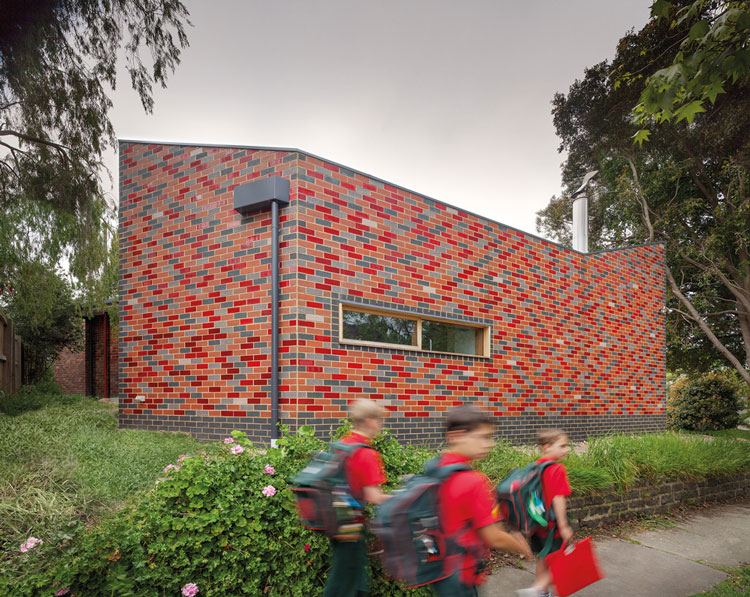 This relationship is not merely skin deep, and importantly the new walls are constructed of double brick cavity. The fancy bricks are all ‘seconds’ -- normally rejected by architects -- and the inner skin are ‘thirds’ -- ready for land fill. While not only matching the quality of the original house, this helps provide a high level of thermal mass for the new living space. The existing floor boards in the areas of the demolished areas of the house were retained and reused to allow for seamless connections of the new stairs and hallway. 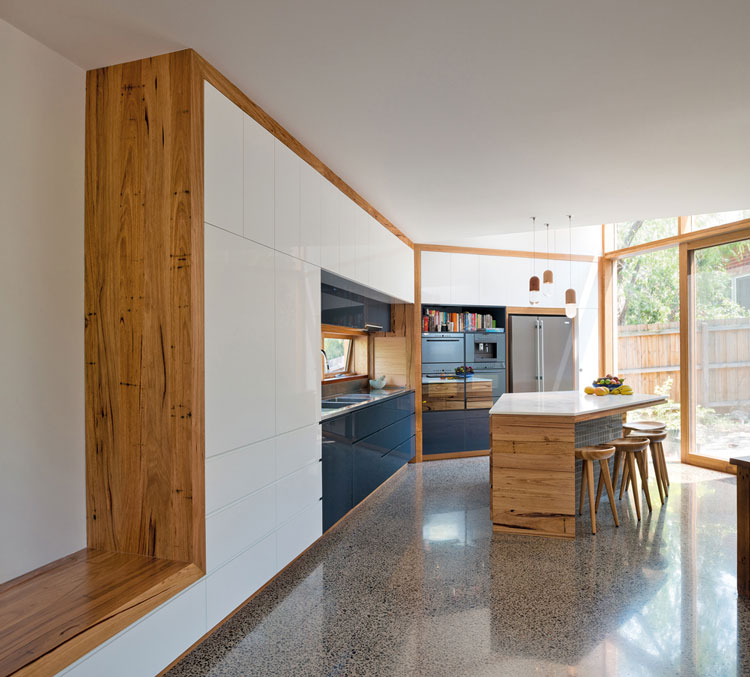 The project has both hot water and electrical solar panels on the roof and complemented by appropriate glazing and cross ventilation, the room is simple to heat and cool. Like all good projects, sustainable initiatives are woven in seamlessly, ticking away quietly in the background, allowing the other architectural aims to come to the fore. 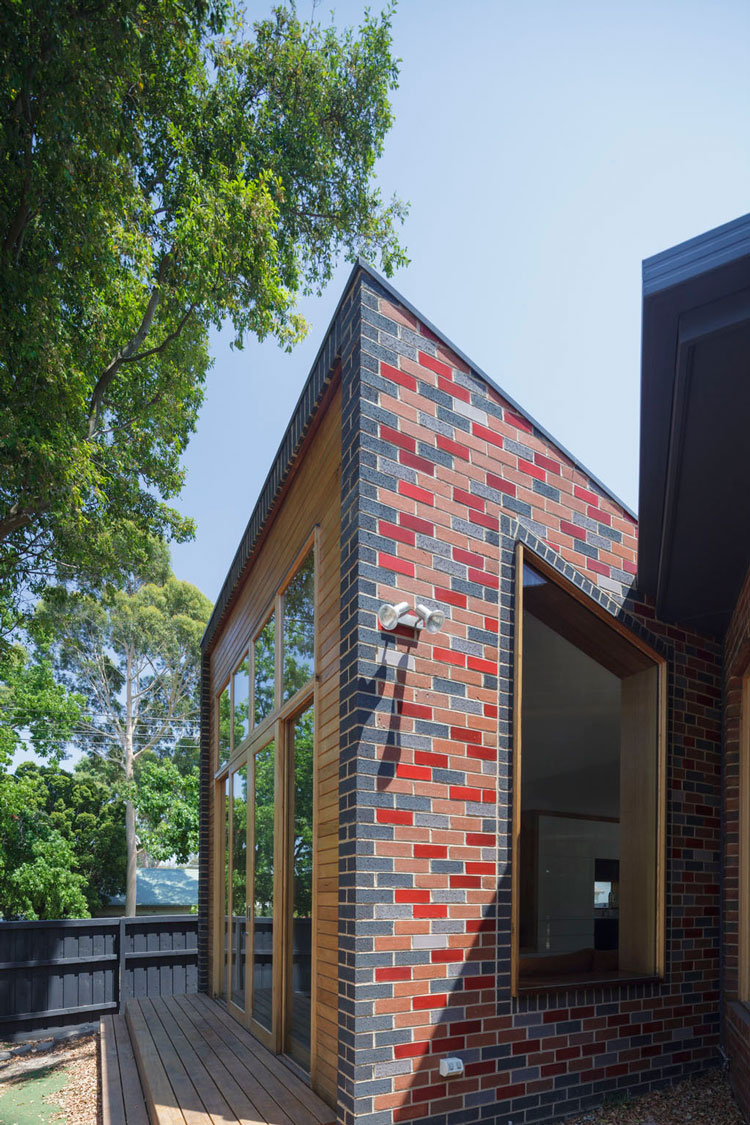 The dialogue between old and new is continued inside the dwelling. The original foyer’s white painted walls and elegant timber details are borrowed in the new interior. However, in the pavilion they become freer and more dramatic. The timber motif changes in scale and role: from a picture rail in the original house -- it becomes stairs, shelving and a low bench in the new living room. Something you hang a painting on in the old, becomes something you sit on in the new. 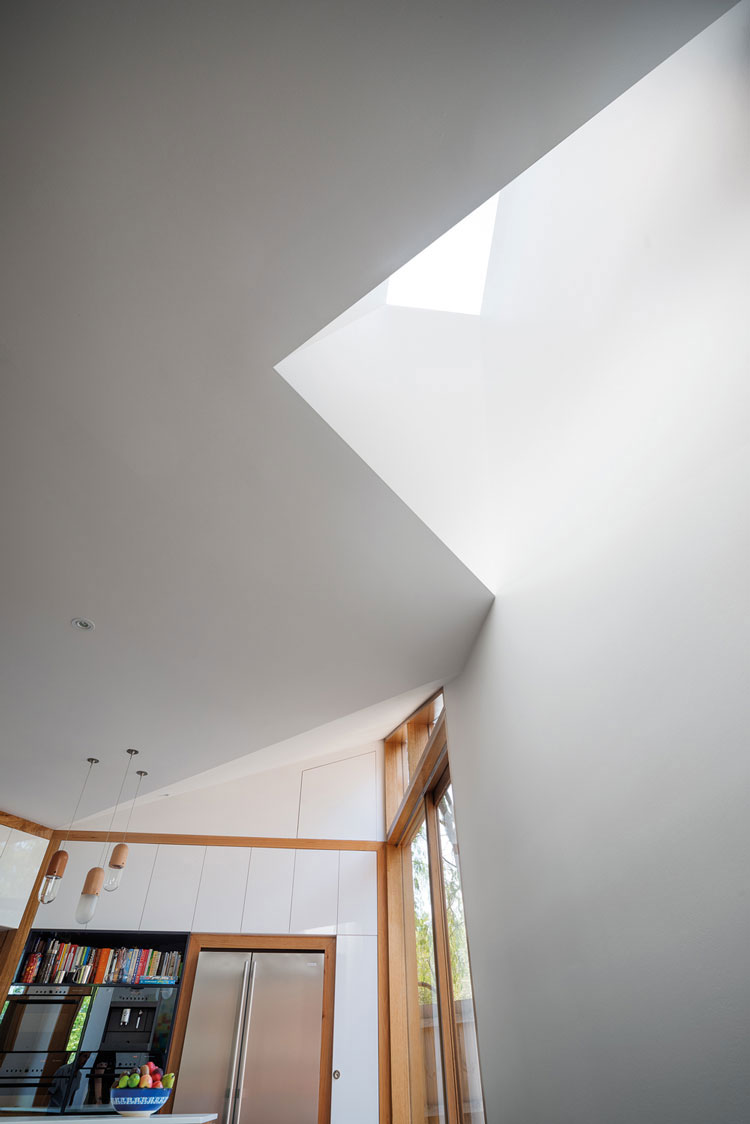 Spatially, the pavilion’s interior brings an entirely new language to the project. Its crystalline geometry is derived from the tucking of the pavilion under the existing eaves. This move allows for deep, chamfered skylight penetrations -- their diamond-like shape accenting the new architectural language. 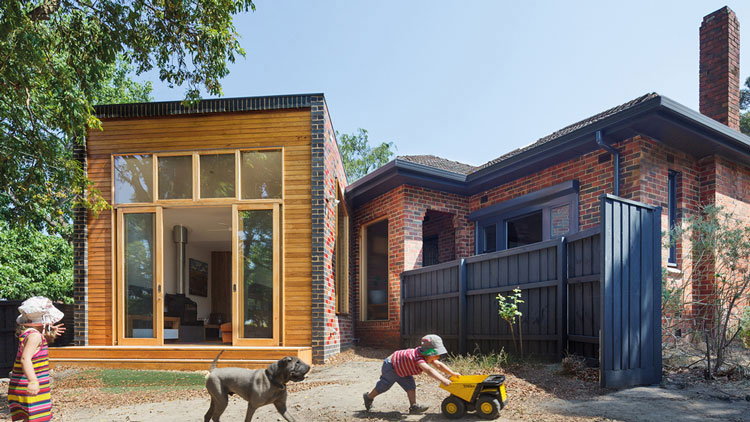 Located on a triangular site, the original house had four yards and three street facades. This unusual arrangement provides opportunities as well as constraints. By straddling three of the yards and attaching the pavilion to one of the facades, the Forever House not only provides a new neighborhood presence, but also makes use of an awkward left over space. This central position also allows the owners to take part in their children’s play whether they are in either the garden or the old or new parts of the house. 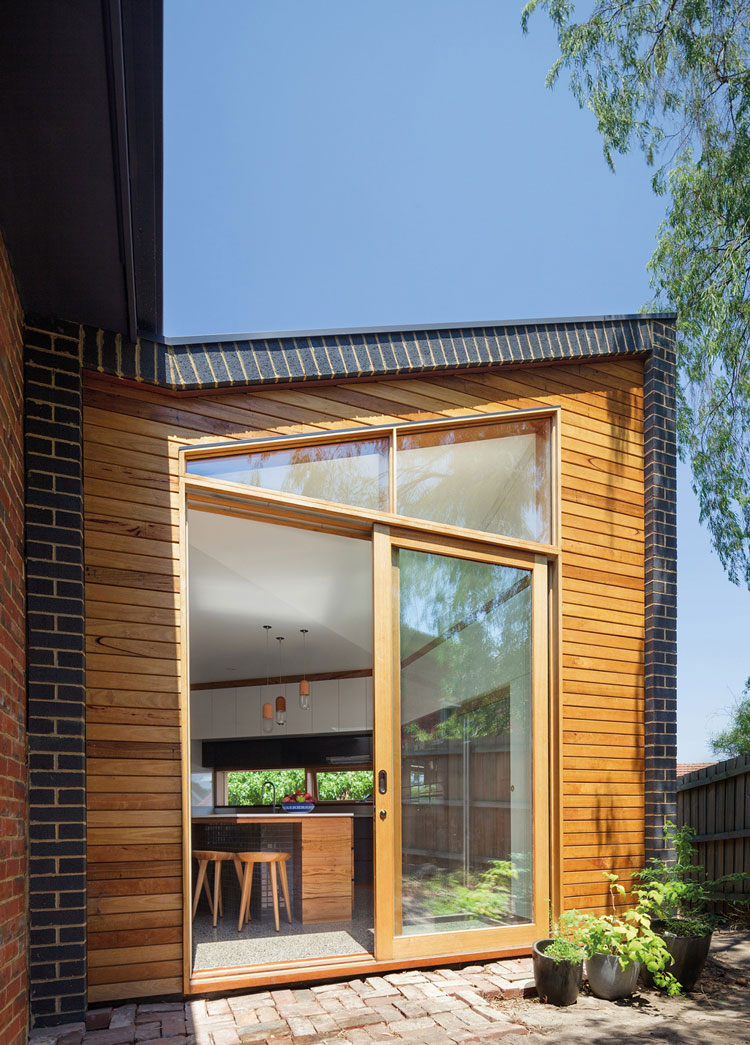 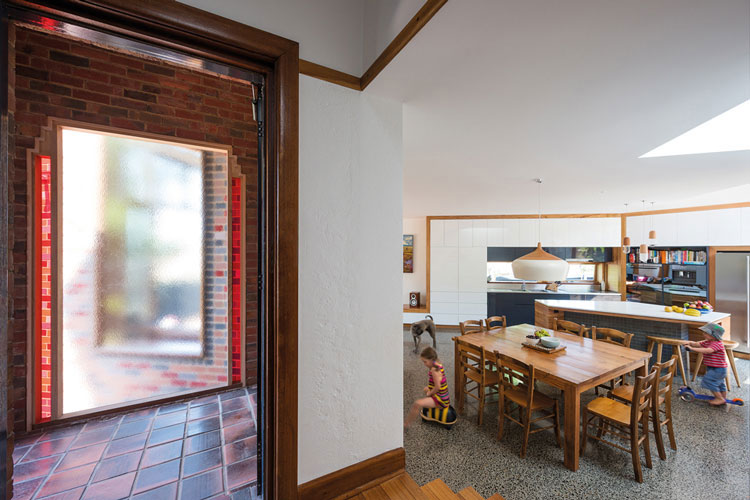 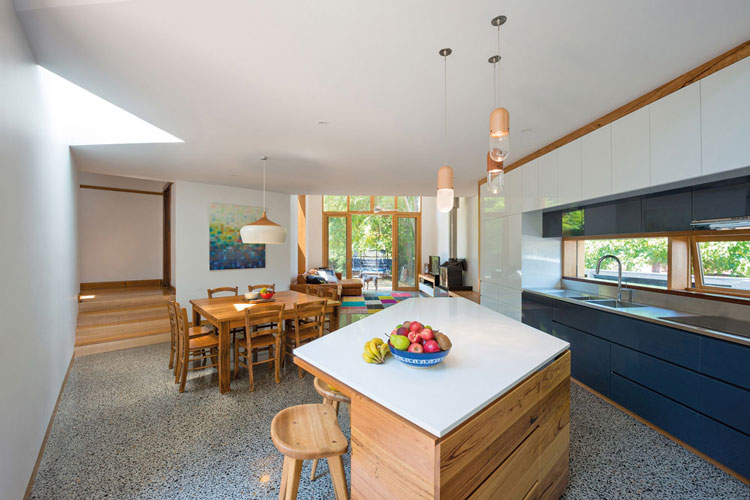 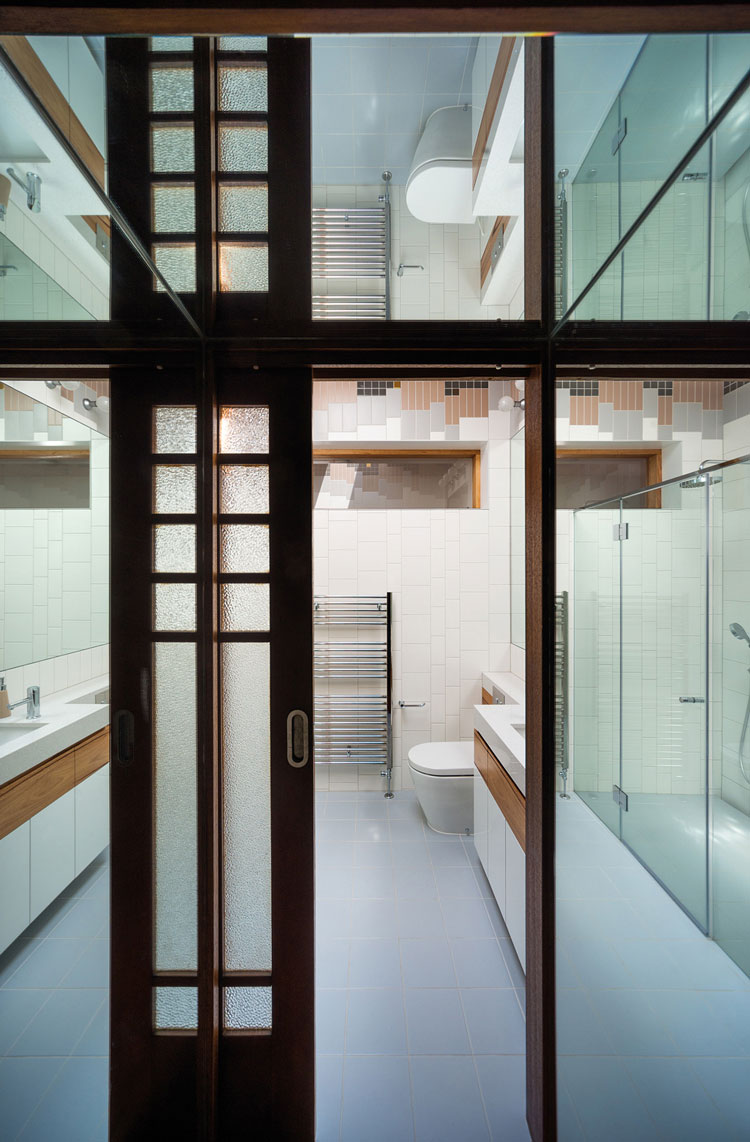 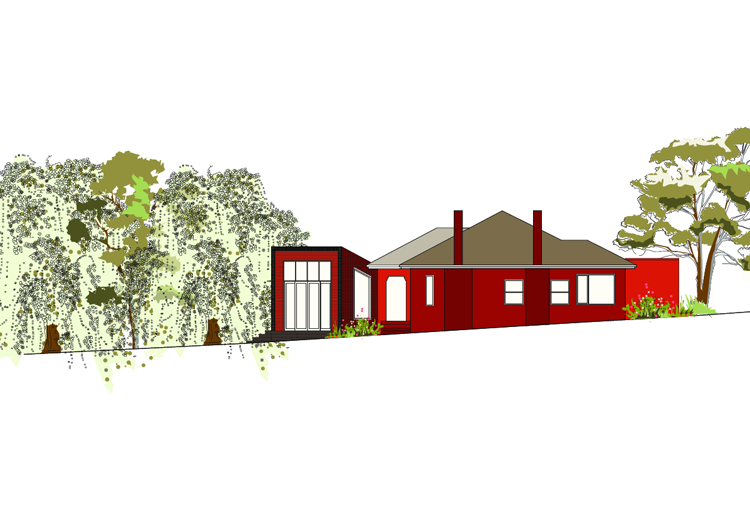 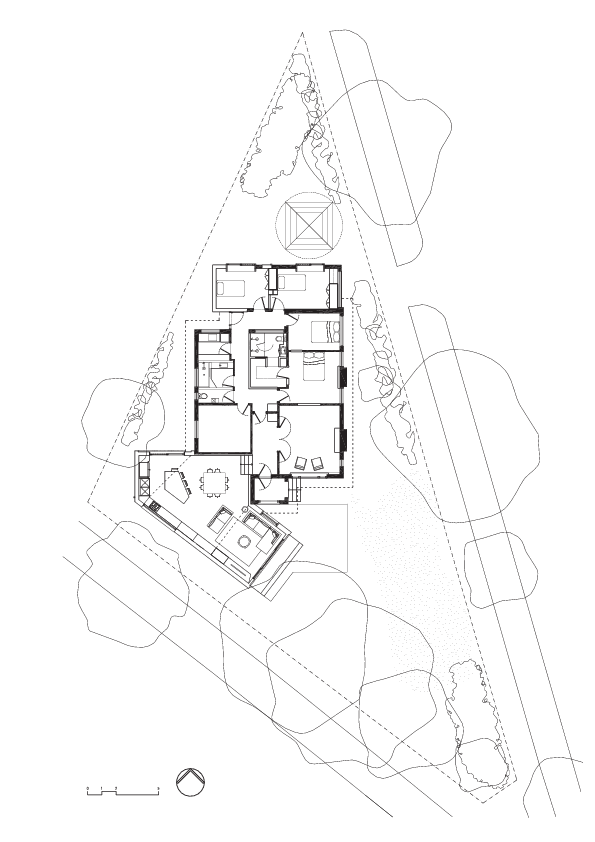 Forever House is a surprising sight, popping out from under the eaves of its original home. The beauty of this project is the skill of integrating old and new. The house looks like it's always been this way - an explosion of fun from the refined lines of the clinker block original. WoodWoodWard Architecture have skillfully managed a difficult site to create a building that is equally rewarding for the street as it is for the owners.