A Clever Addition Turns a Potentially Problematic Site Into Gold

Others seemed put off by this heritage-listed cottage with front and rear access and a long, western boundary facing a public park. They probably envisioned the downsides of such public exposure: noise, vandalism, theft. The owner, however, with the help of Sarah Kahn Architect could see the potential to create a private sanctuary full of light and soaking in leafy views... 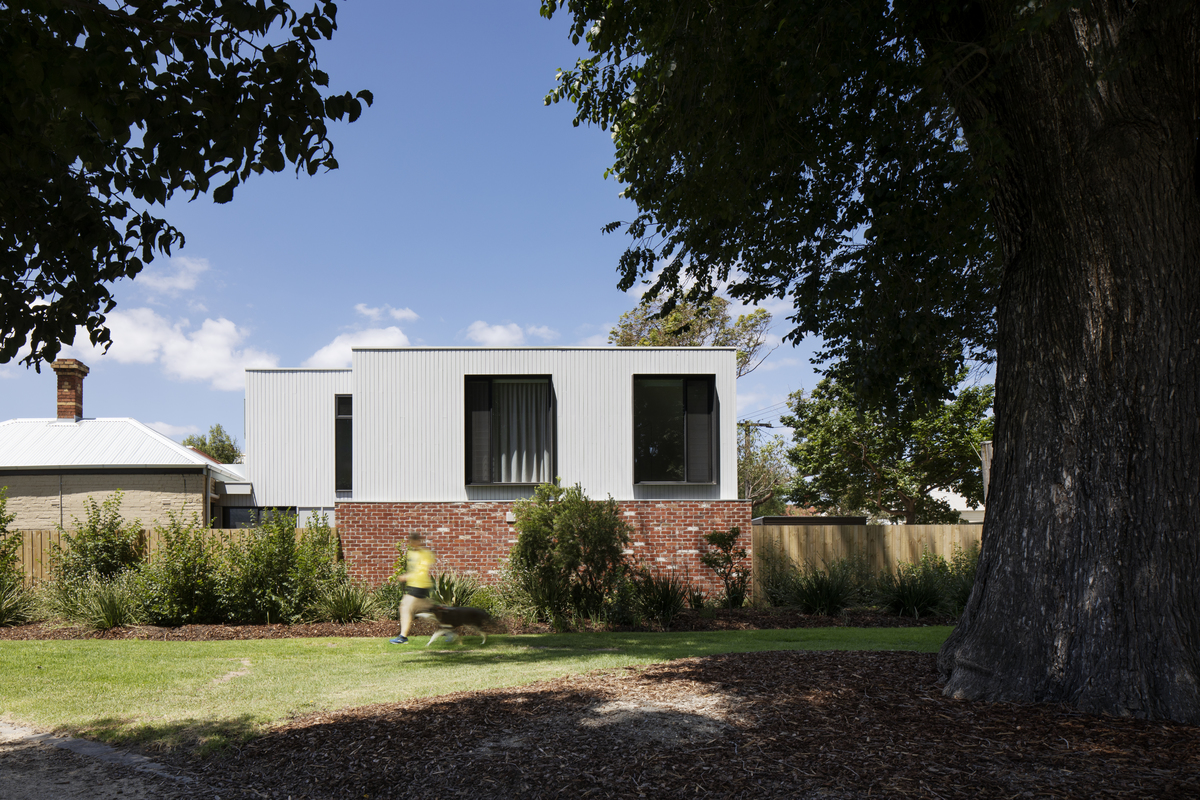 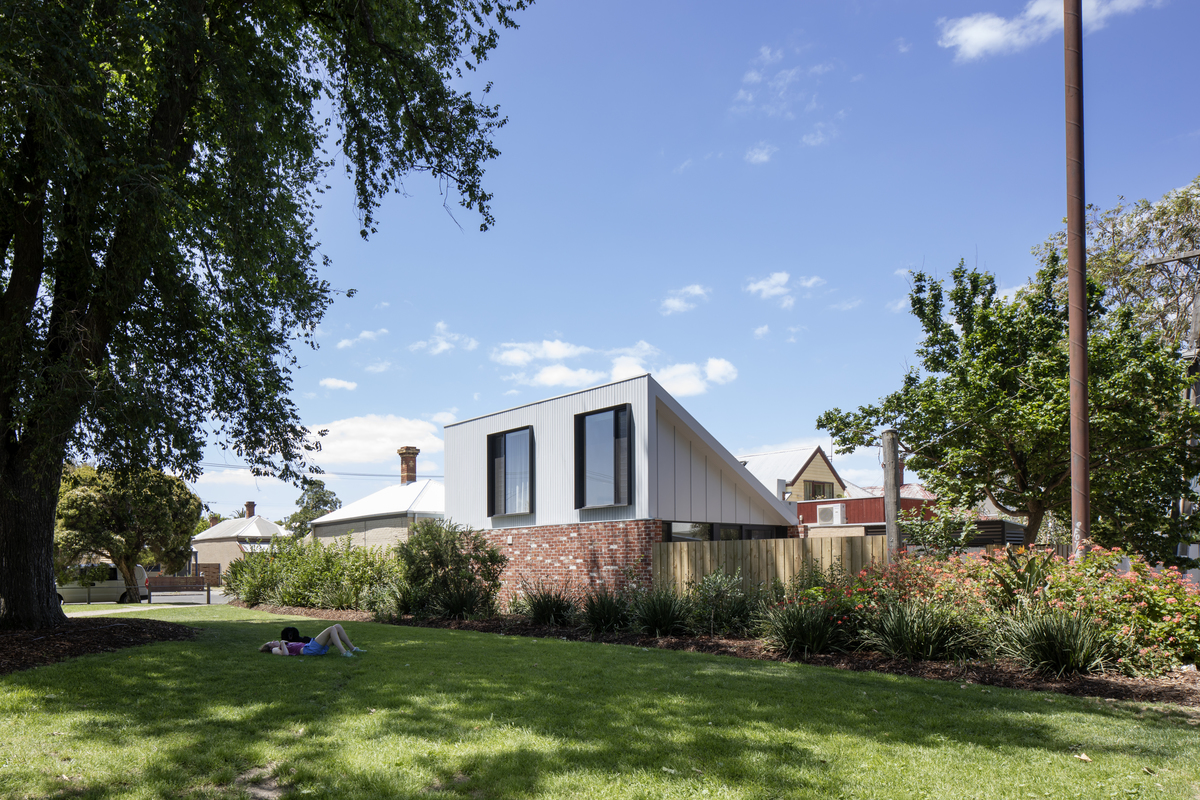 What could have been a very typical addition became something quite atypical and unique thanks to the site. with front and rear access as well as a long western boundary facing a park, the home is in a very public position and the addition would not have the benefit of hiding out in the backyard. Instead, the architect embraced this exposure, creating a bold sculptural form that makes the most of its leafy outlook. 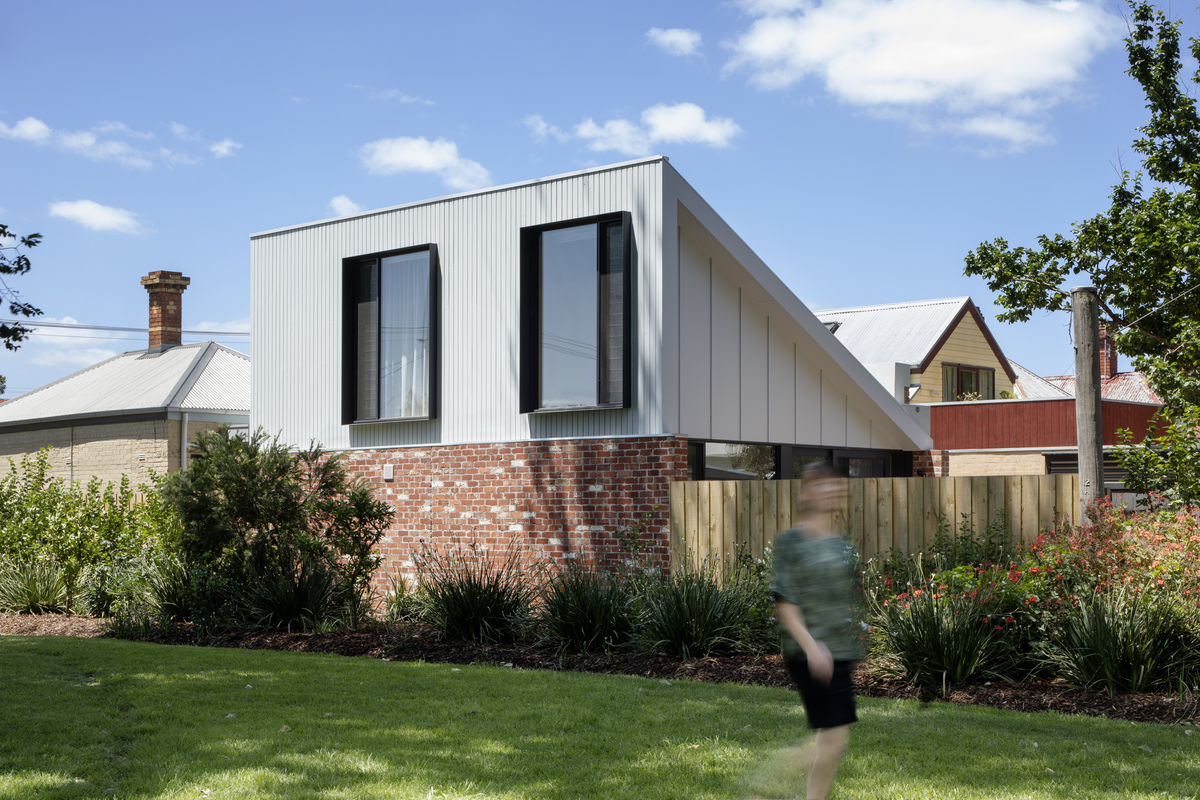 "Heritage overlays on the site called for retention of the existing front section of the house including the bedrooms and chimney", explains the architect. "The existing lounge and a series of rear additions were demolished to make way for the new addition, with the final completed house actually reducing the overall footprint on the site and creating a larger private rear garden and new north facing deck." The tired terrace house has been transformed into a modern three bedroom, two bathroom home for the young owner while retaining the heritage features at the front of the site. 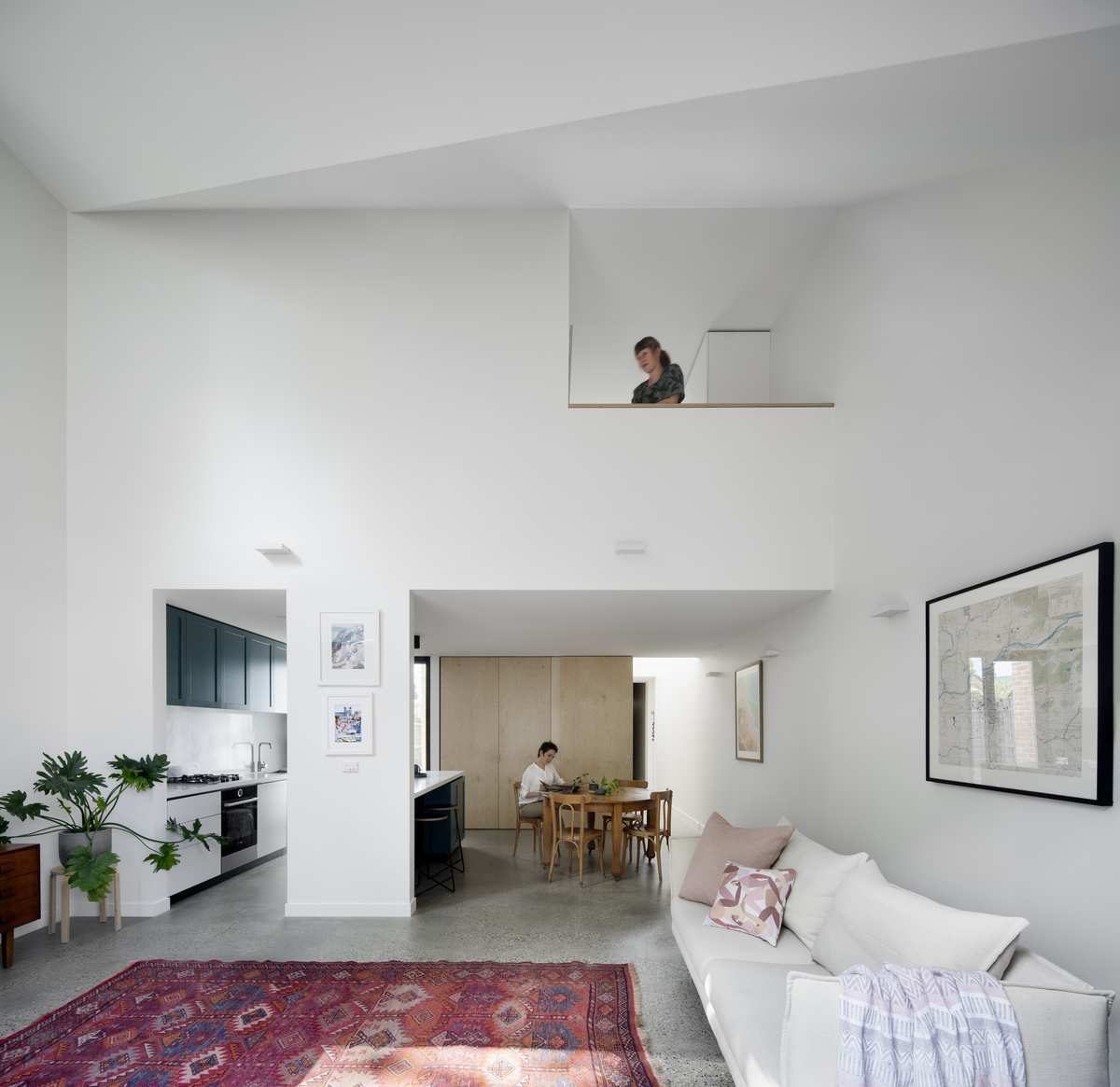 Separating the original house from the new additions is the new stair, a bathroom, laundry and a bright deck space that enjoys north sunlight. From there, the new open-plan kitchen, dining and living area opens onto the garden. 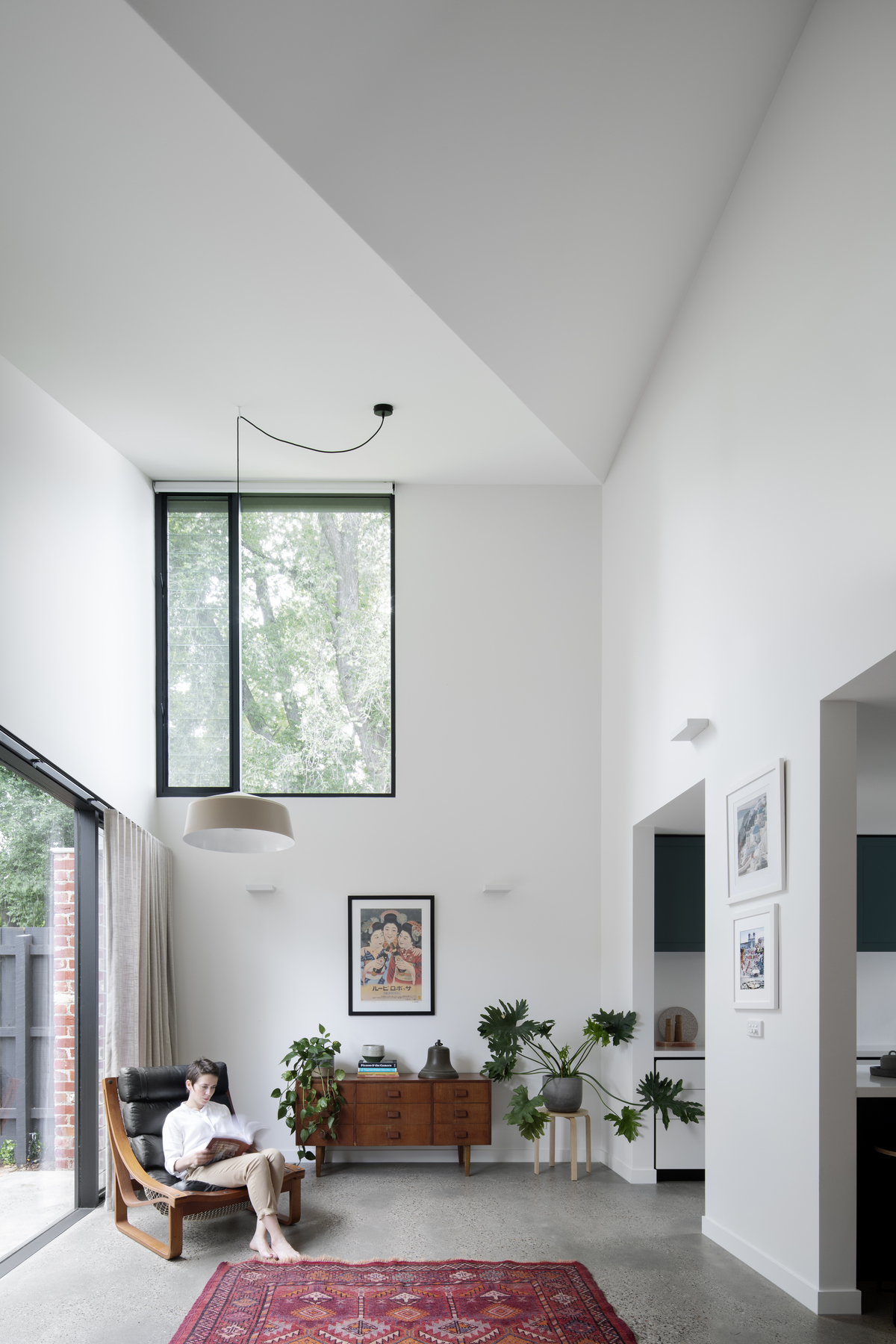 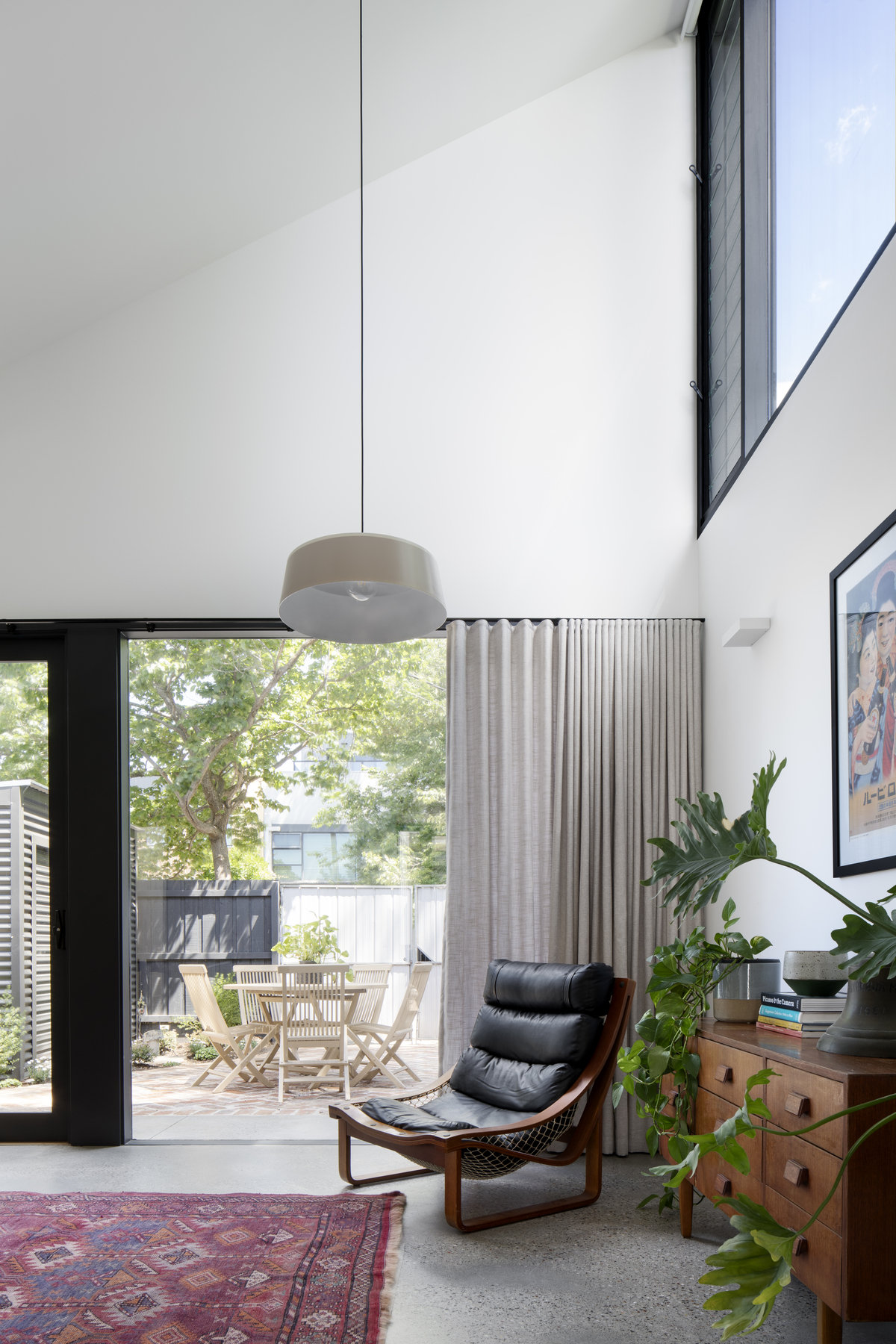 From the park, a robust red brick wall blocks noise and creates privacy at the ground level while the bold pitched roof rises up to grab light and frame views of the park above. Tucked under the roof are a bedroom, bathroom and study. A void over the rear makes the compact lounge feel much larger than its actual size, with the roofline matched internally to offer an impressive sense of volume. 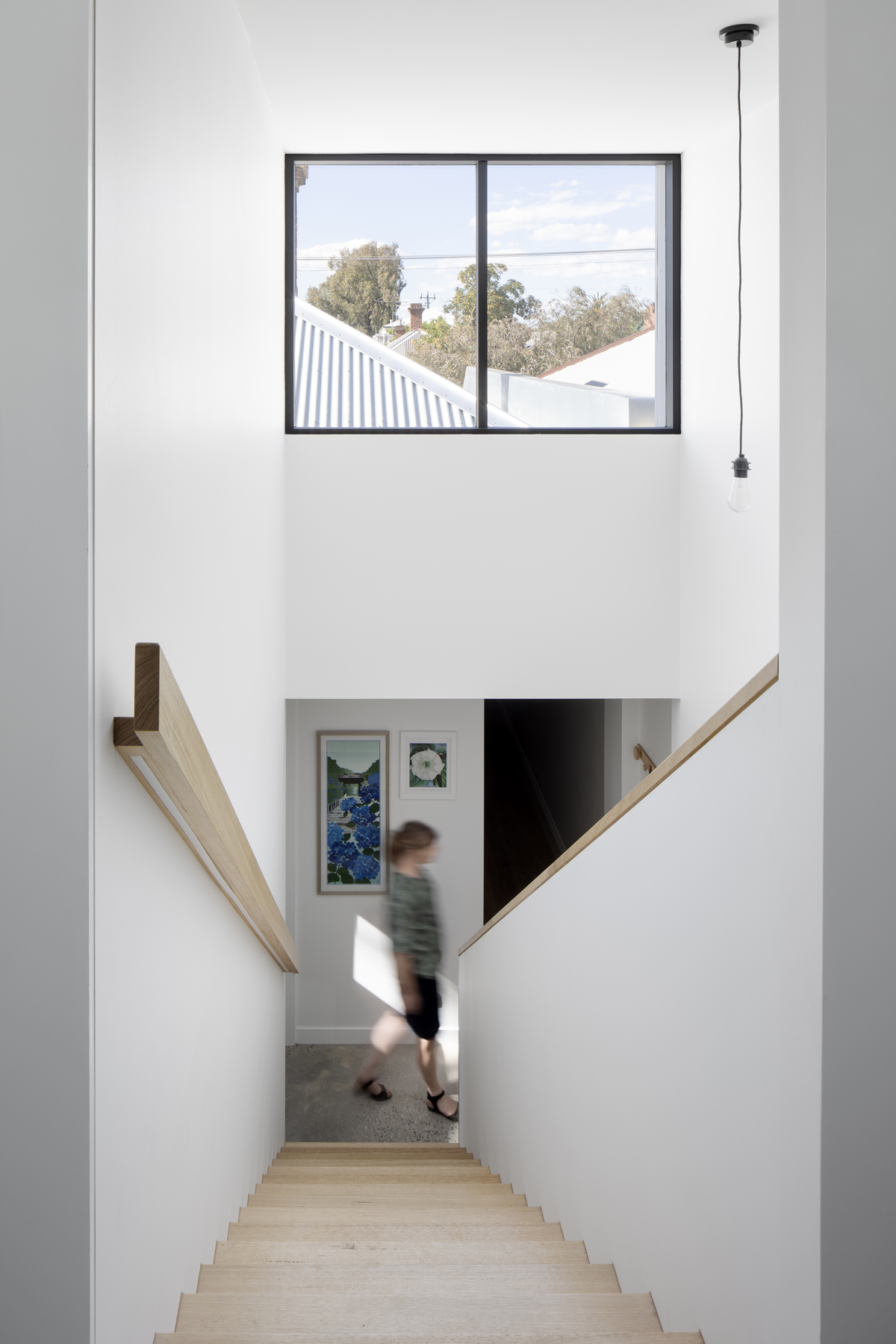 Another double-height space beside the stair brings light into the long corridor thanks to a strategically-placed window overlooking the rooftops of Brunswick. "At ground level, wide glazed siding doors and full width windows connect the interior directly to the rear garden and new deck, making the relatively small spaces feel much larger", explains the architect. 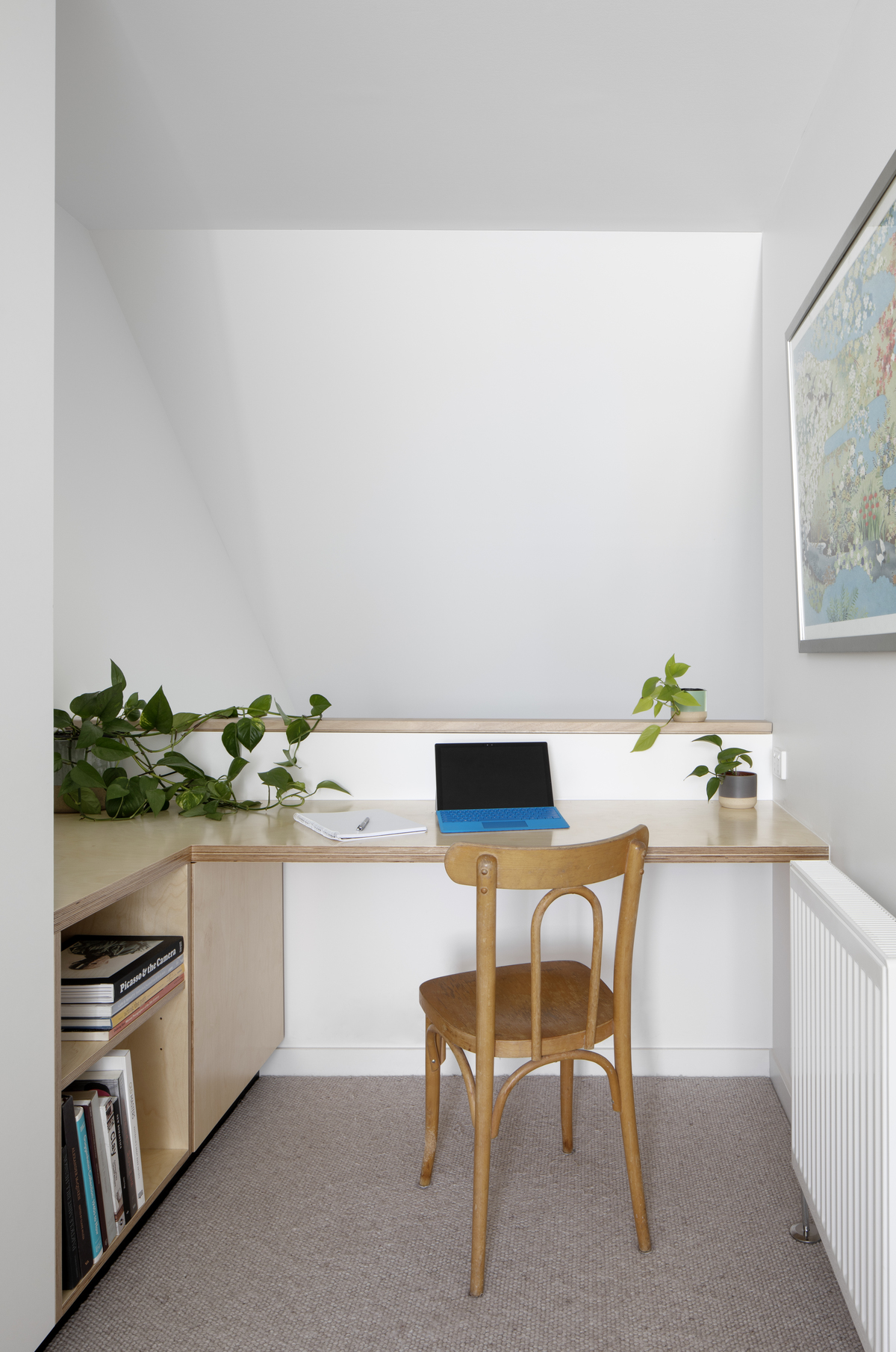 Internally, finishes are simple and cost-effective to work within the owner's budget. White plasterboard bounces light around and maximises the sense of light and volume. "Feature walls of natural finished plywood and dark painted timber window frames create contrast with the white and together create a simple backdrop for the owner's eclectic furniture and art collection." 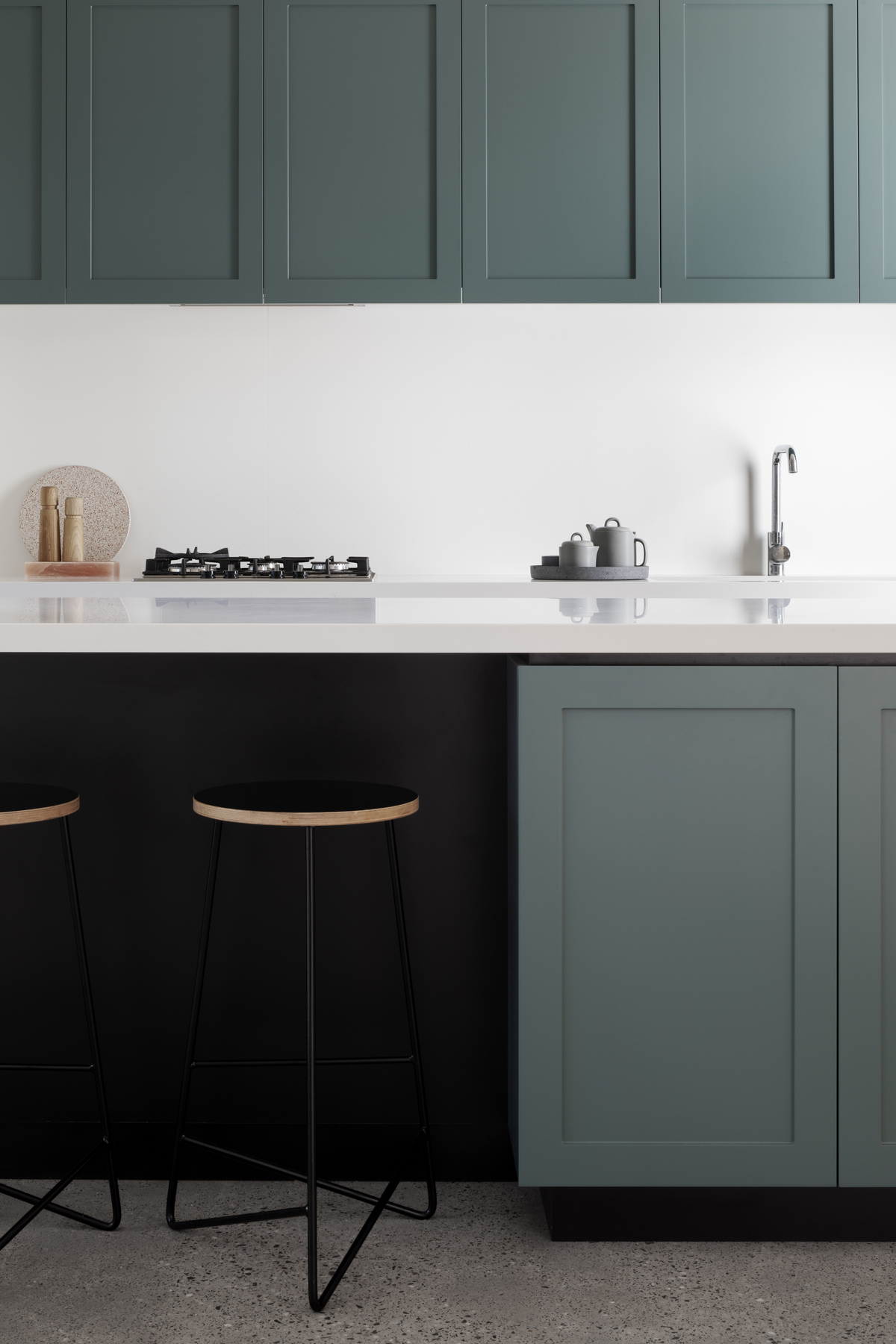 In the kitchen, a pop of the owner's favourite teal colour brings additional personality to the home. It's balanced with white, black and plywood for a rich yet harmonious look.

"The final outcome is a home that has a very public face and embraces this exposure to the park, yet feels like a private sanctuary within. Framed views and light enter the interior spaces throughout the new addition, providing glimpses of the surrounding neighbourhood and park at every step. A site that was apparently seen by other potential buyers as a liability with its exposed boundary and public face, was luckily embraced as a rare opportunity by the owner and has now provided a unique setting and great potential for the completed home. A little pot of gold." - Sarah Kahn Architect 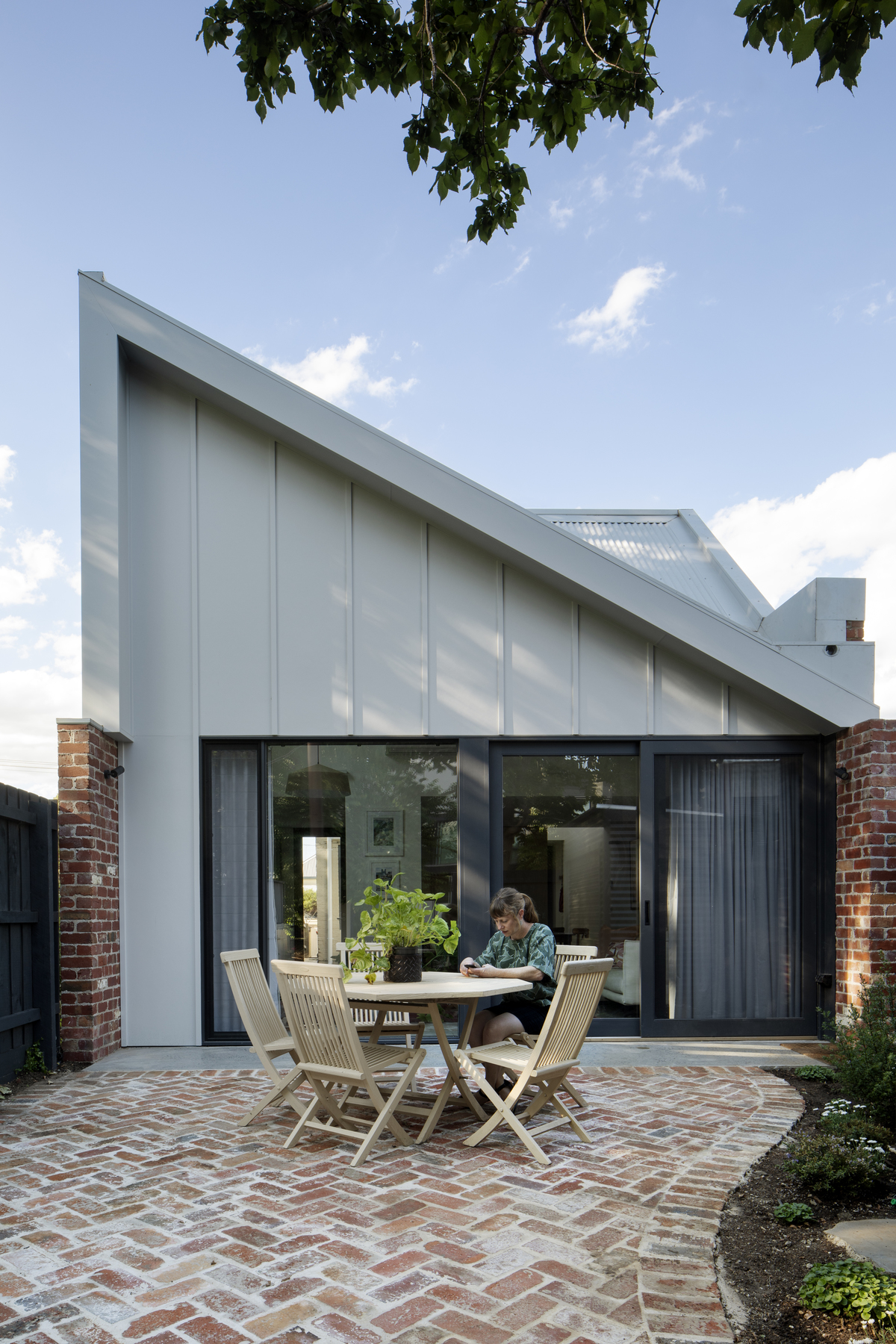 In a sort of initiation by fire, the owner managed to move in just before Melbourne entered its stage four lockdown. Despite being stuck in the home virtually 24/7 for several months, both the owner and her friend and housemate describe the home as a joy. You can't get much higher praise than that. 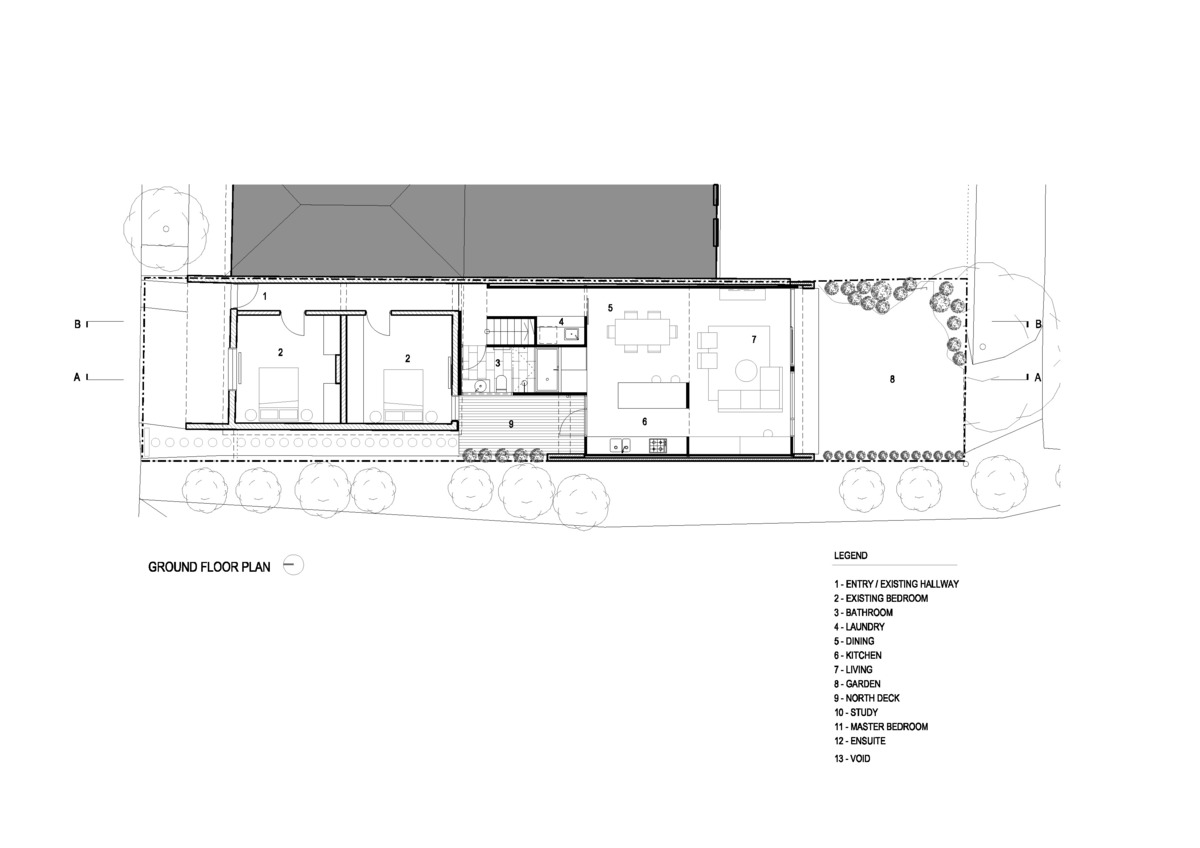 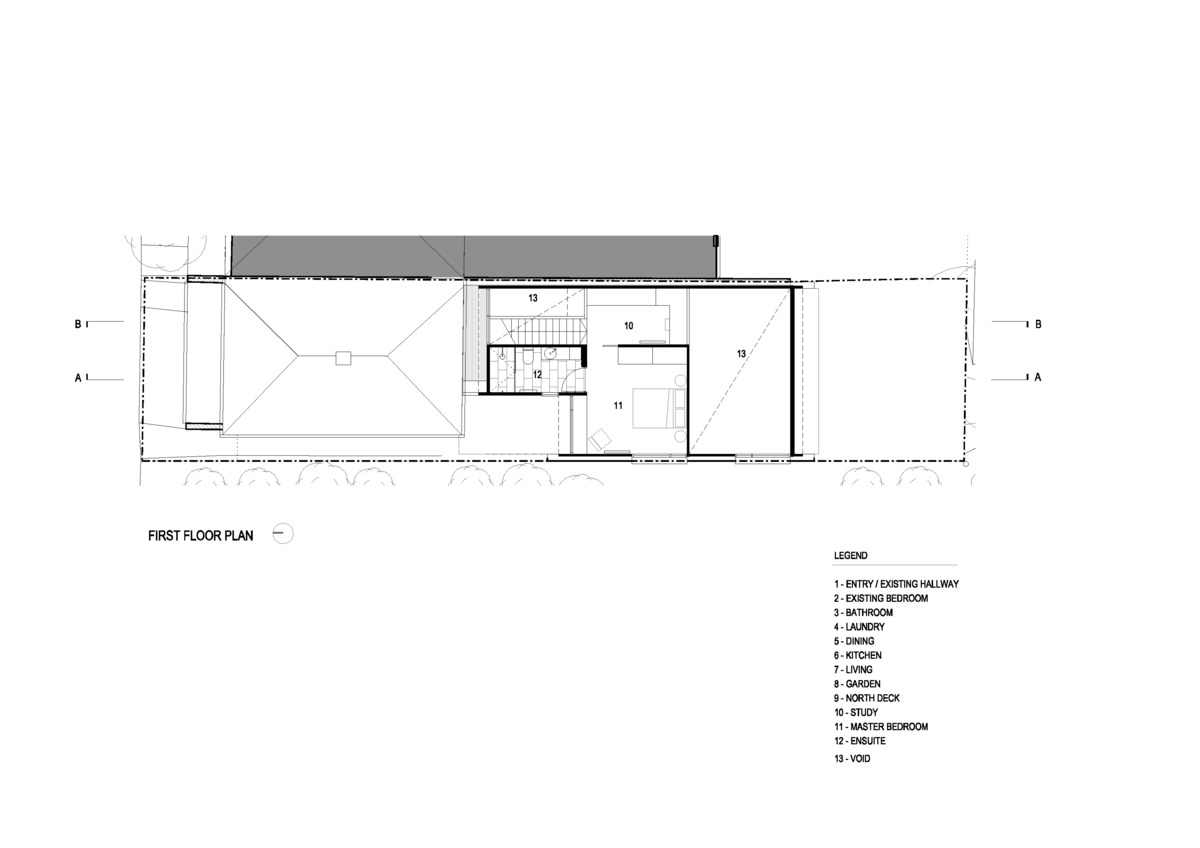 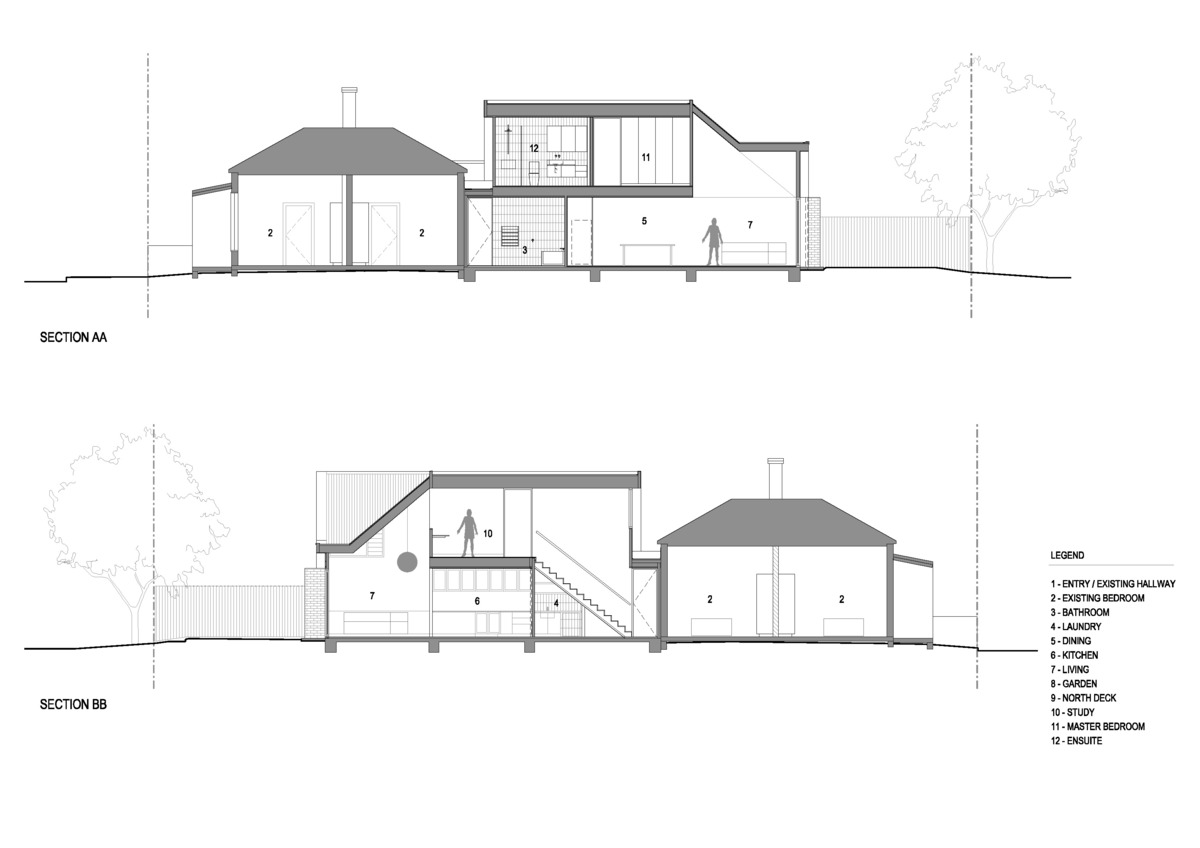 Tell us what you love about Gold Street Residence...