In an incredible case of foresight, business owner, Gary Schmit, decided to transform his double garage into a functional and beautiful home office - just before the pandemic hit. 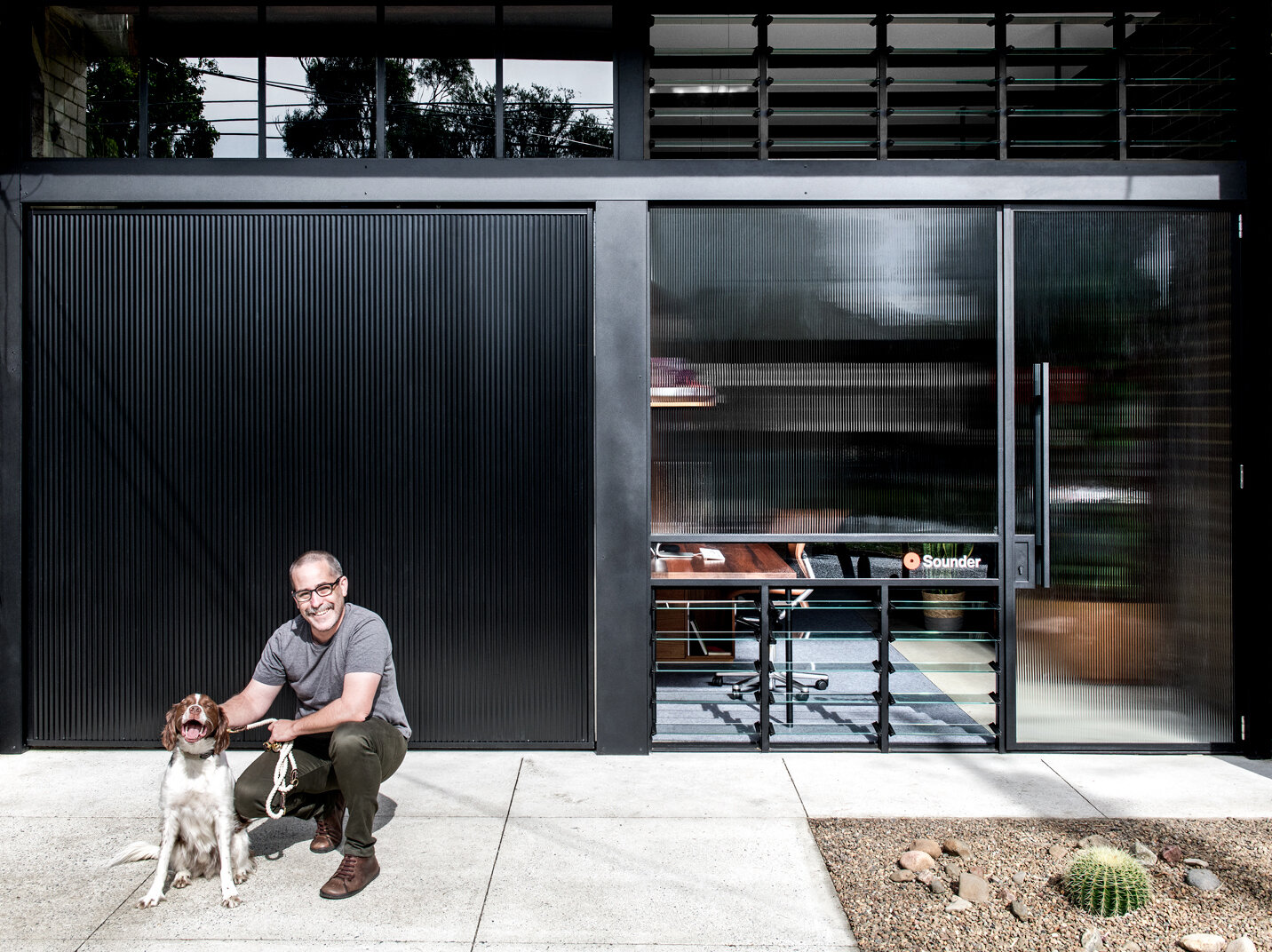 While it's now commonplace to work from home or have some kind of hybrid arrangement, Gary was thinking about ways to simplify his life, reduce his commute and slim down his carbon footprint before Zoom was a household name. The decision to move his office into an existing double garage solved all of these problems and, with a thoughtful and beautifully detailed design by Amok Studio, Gary "can't imagine working anywhere else". 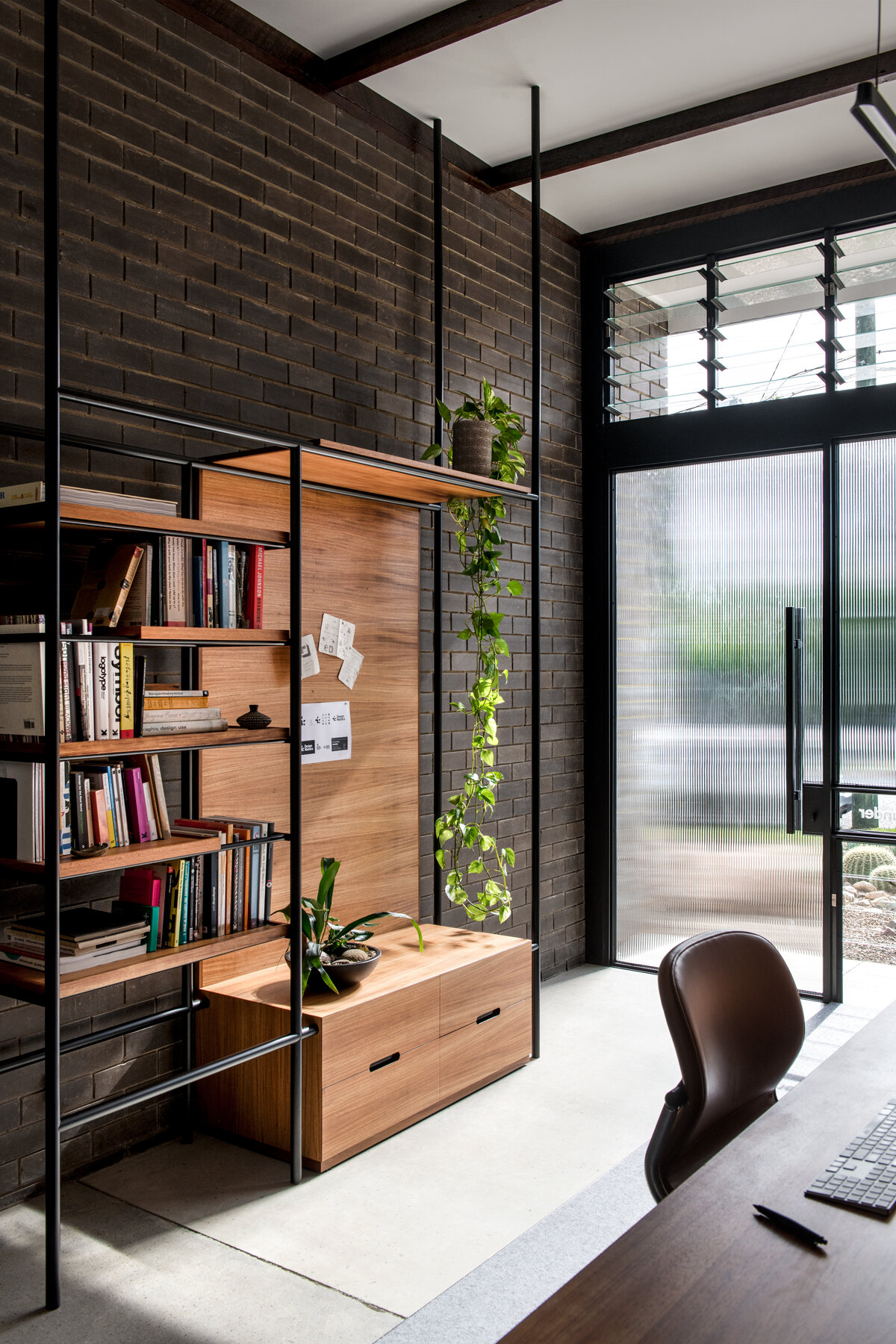 Working in the branding space, Gary understands the way our physical environment can influence how we think and feel. And, being such a visual person, it was important to have an office that was not just functional, but beautiful to boot. Gary and his wife, Sophie's house is a mid-century-era home in the Brisbane suburb of Keperra. Amok Studio shared the space Gary was working in and they realised they had shared values, so it made sense to work together to design this new home office. 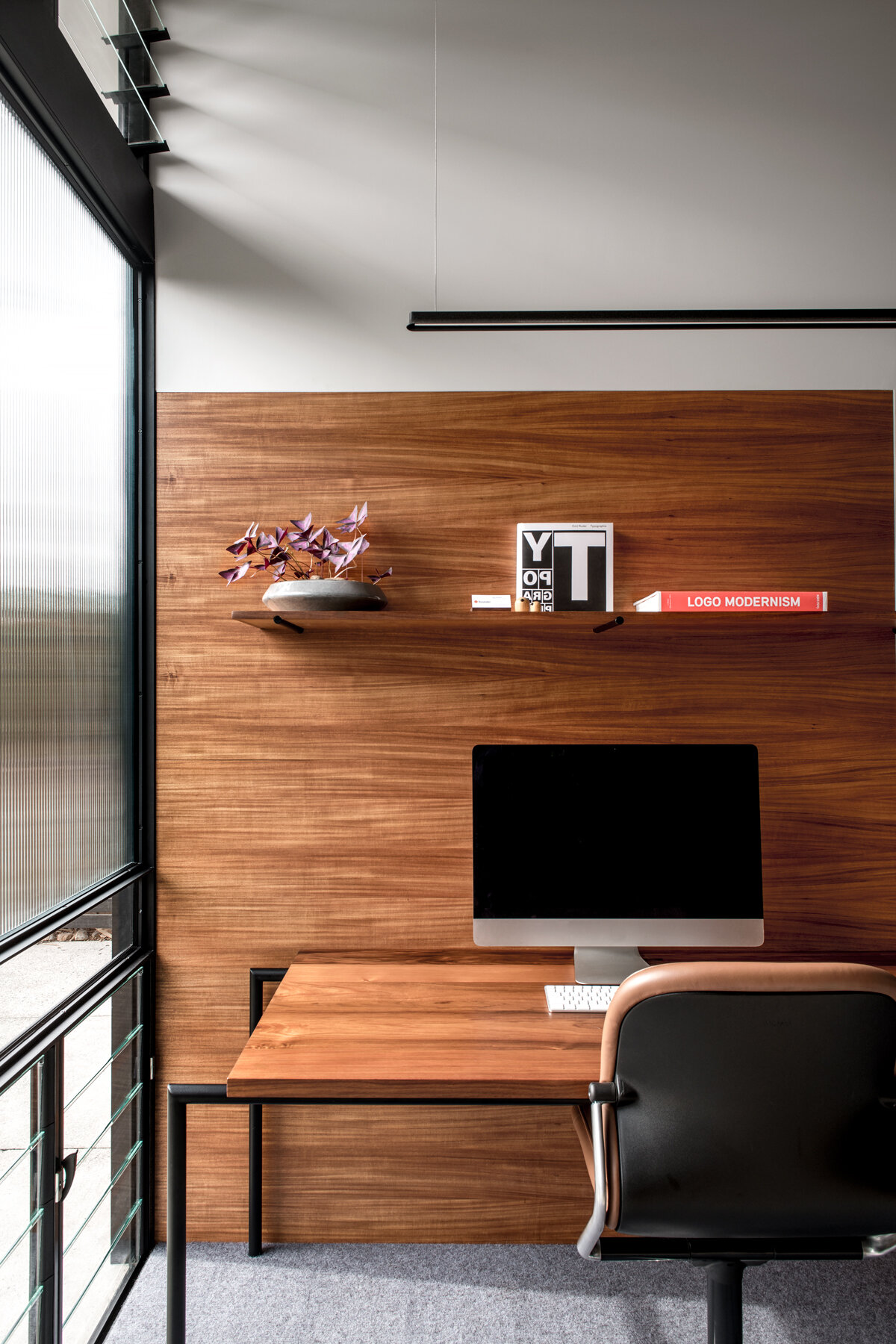 The design embraces the mid-century aesthetic of the home, with warm timber, exposed original brick and timber beams, fluted glass, and minimal steel details, the humble garage has been turned into a high-end office even Don Draper would look at home in. 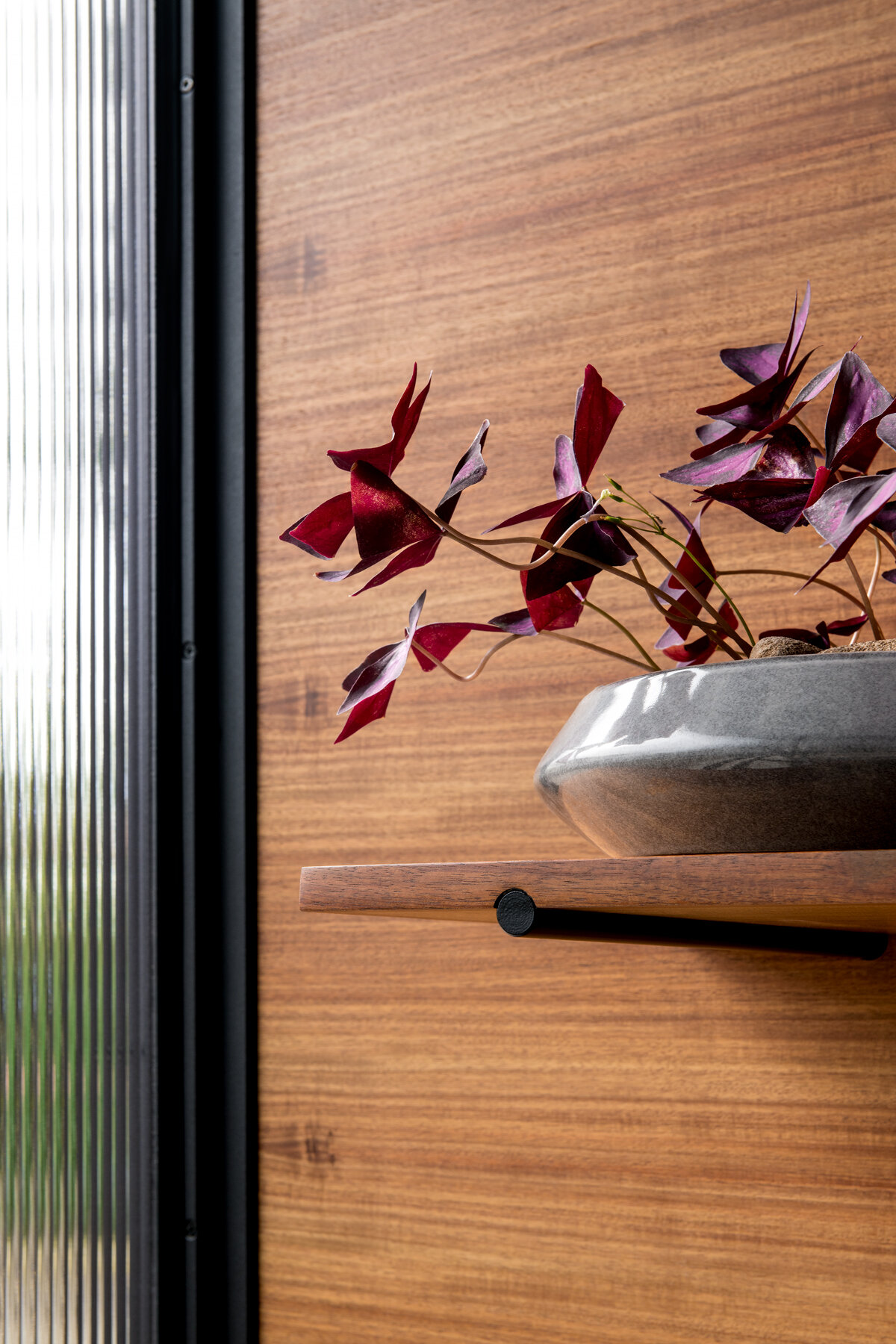 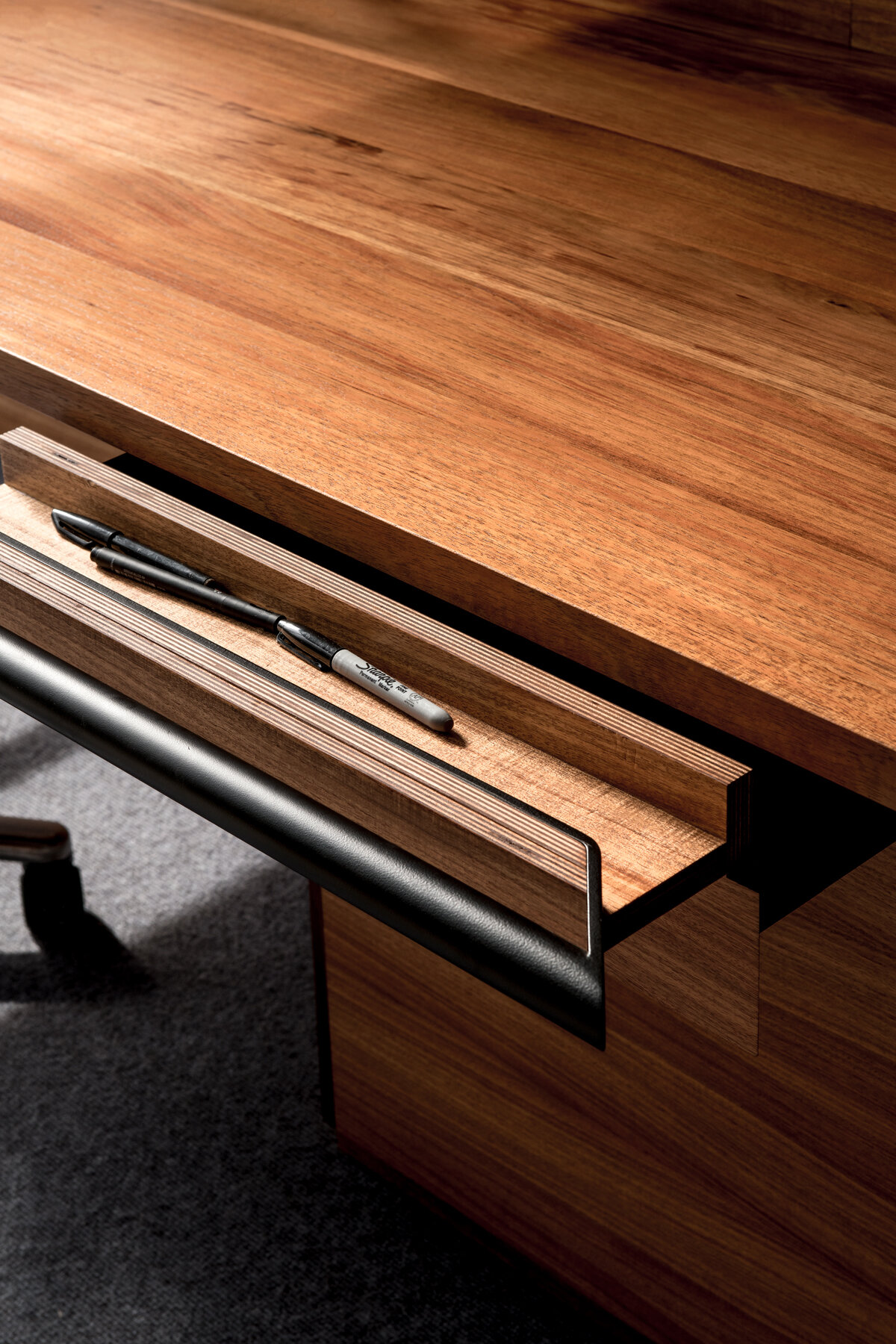 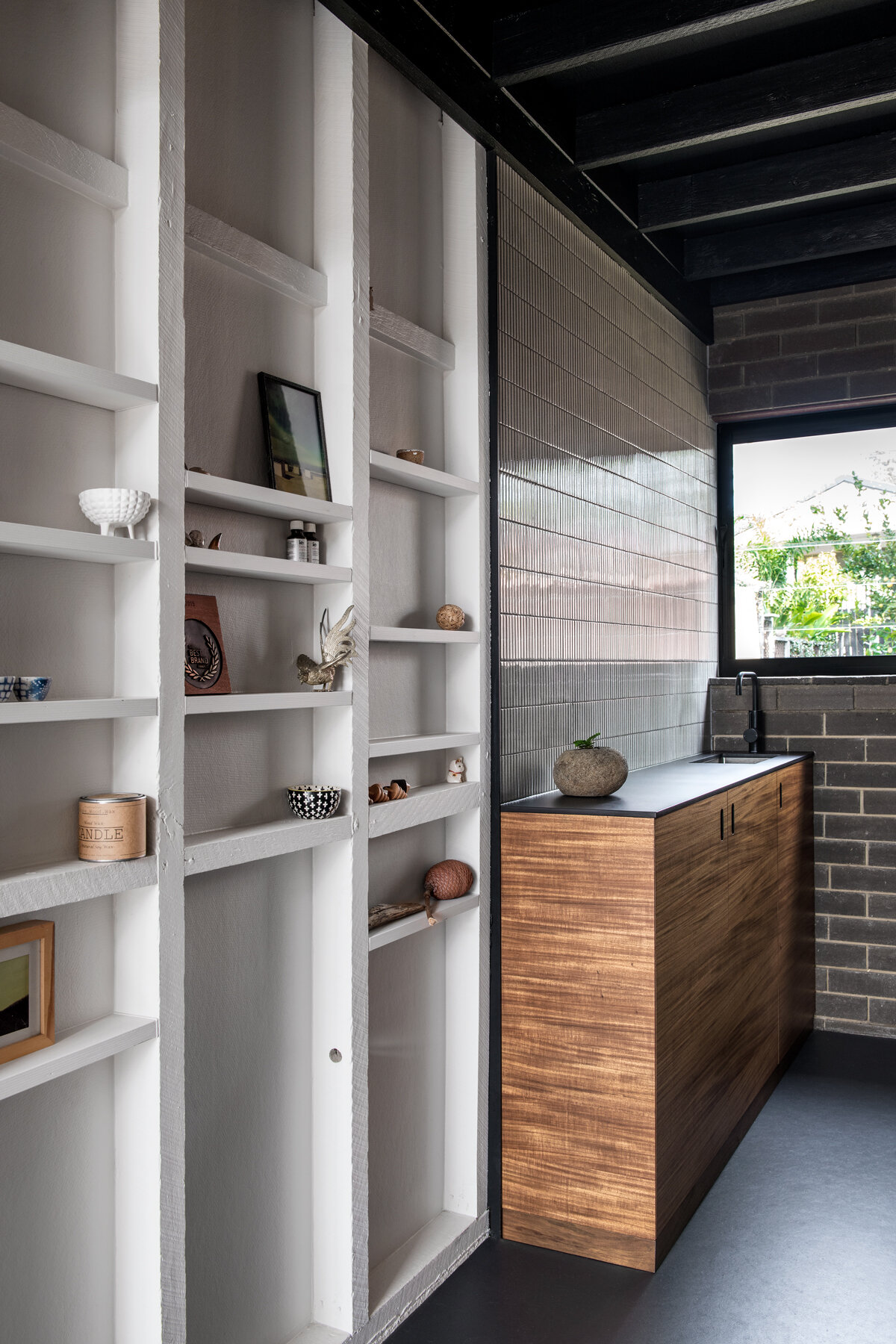 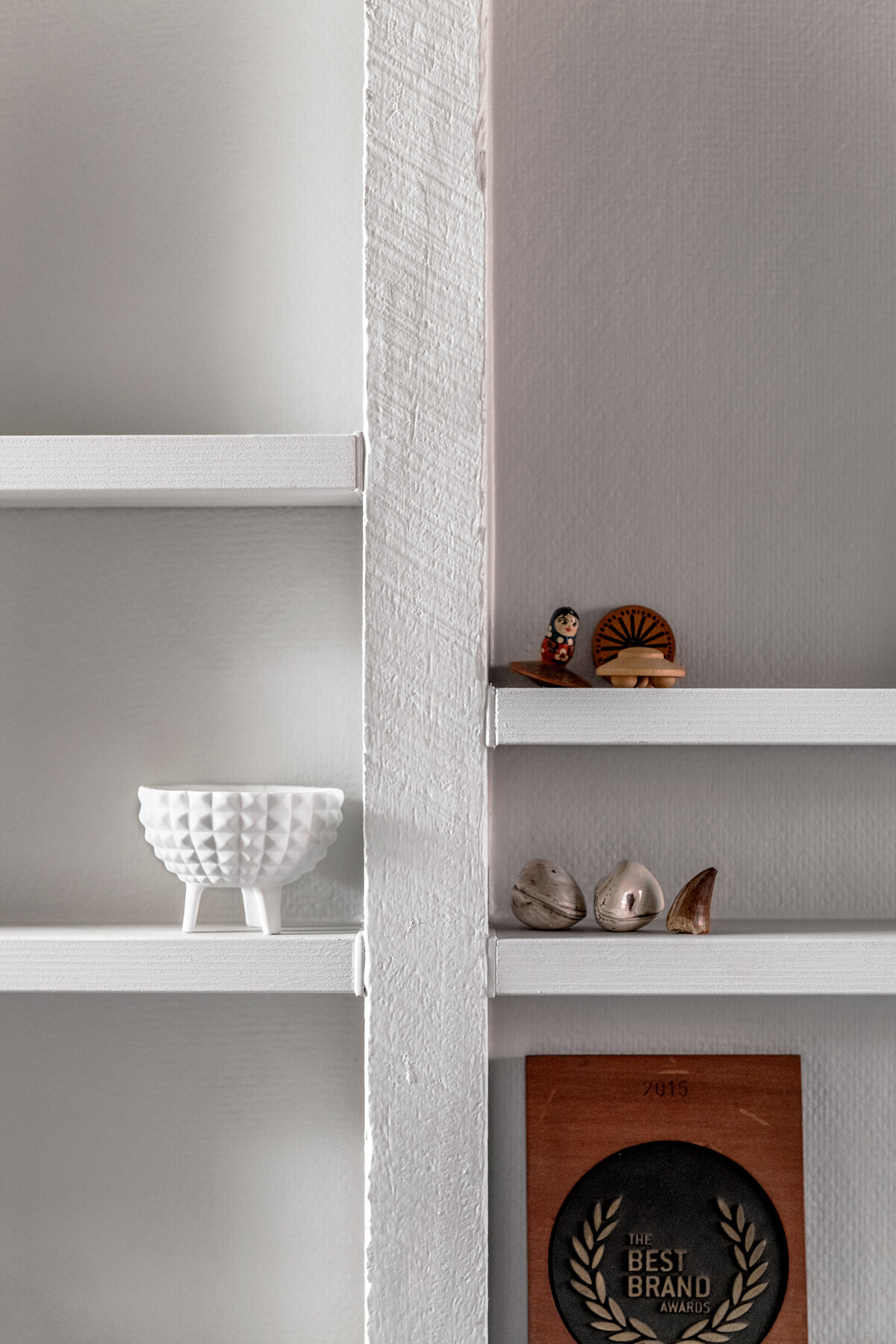 Impeccable detailing ensures the compact and minimal space is functional and not just aesthetic, which was key for Gary. Even all the cabling is concealed in the framework so the entire space feels uncluttered and effortless. Details like the studwork shelving and slide-out pen holders in the desk came from conversations with Gary about how he likes to work. Gary explains that if he had drawers, he would just end up stuffing them with garbage. Instead, the integrated shelving throughout the office is used as a rotating display of Gary's beloved collection of curiosities like tops and fossils to create a personal atmosphere 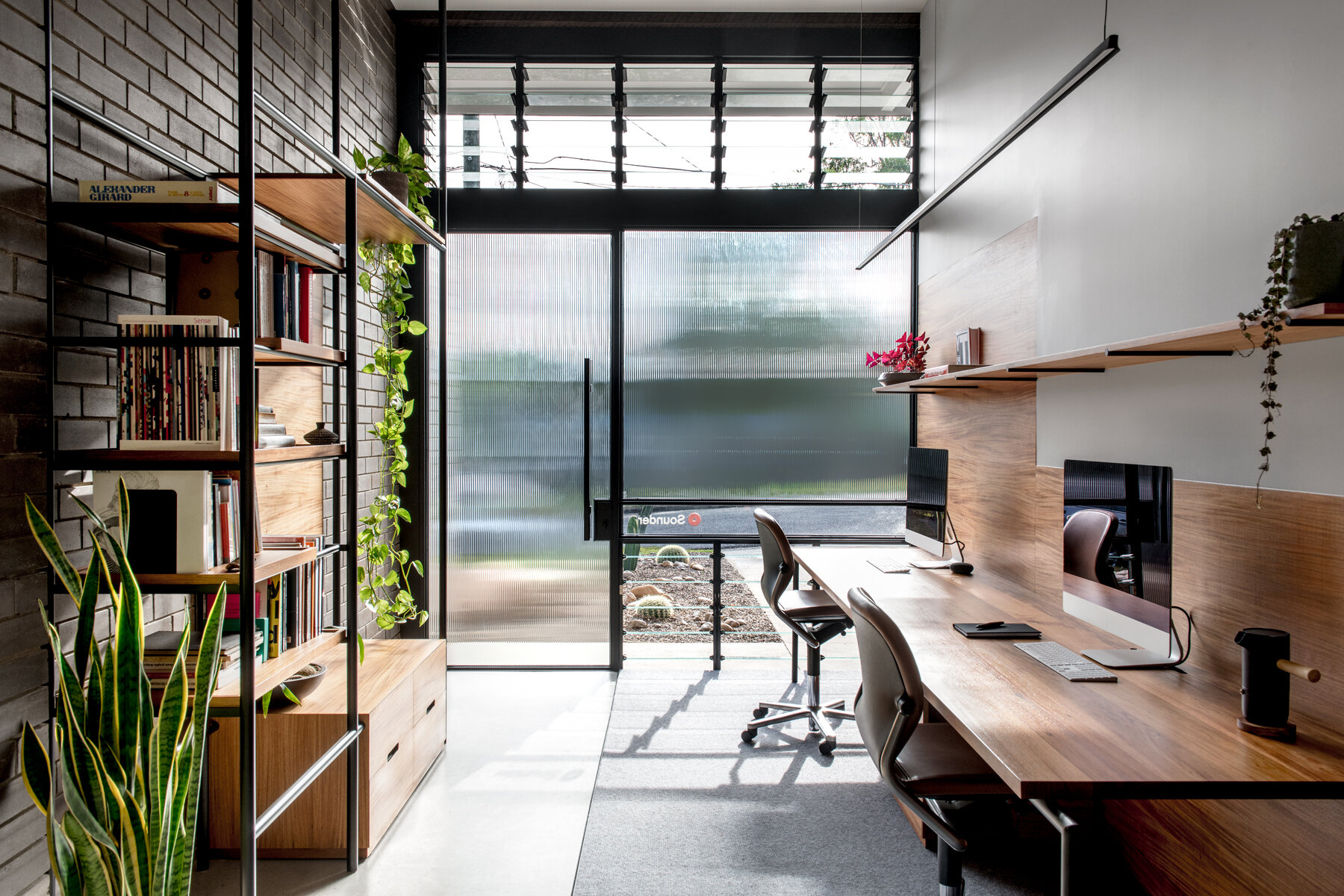 New geometrically designed steelwork is slotted into the existing opening of the garage. Fabricating the steelwork offsite and getting it to fit neatly into an existing opening is always a challenge and turned out to be one of the most challenging parts of the project. The new office front was fabricated by Iron Fist who was fantastic to work with, explains Gary, and brought in in three pieces. After much "swearing and improvisation", it now looks like it was always there; like it was meant to be. 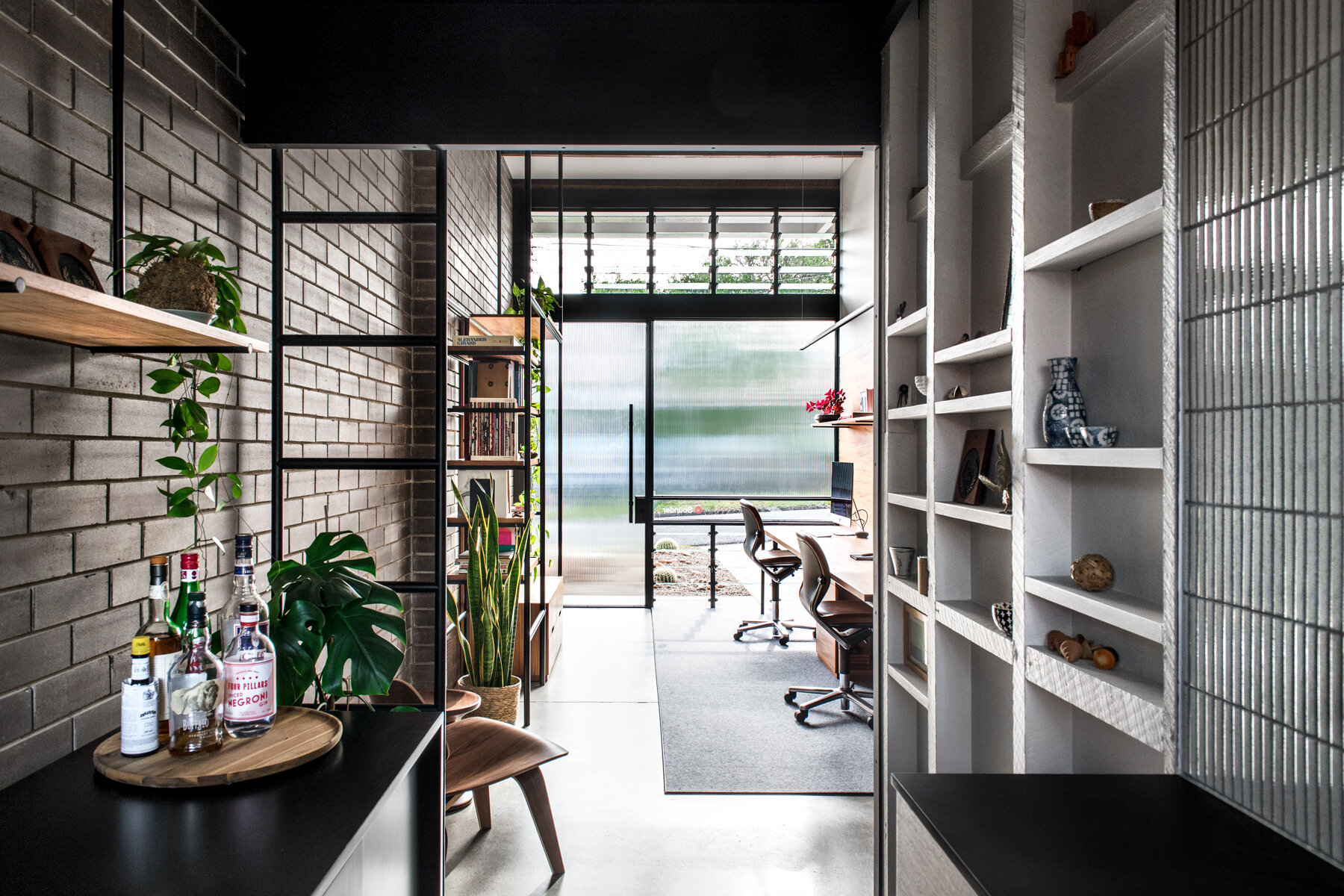 The studio is designed to stay naturally cool, even in Brisbane's warm and humid climate. Louvre windows up high and down low encourage cross-flow ventilation, not only catching all available breezes but also using the heat-stack effect to expel warmer air as it rises to the top of the space, and drawing in fresh, cooler air to replace it. 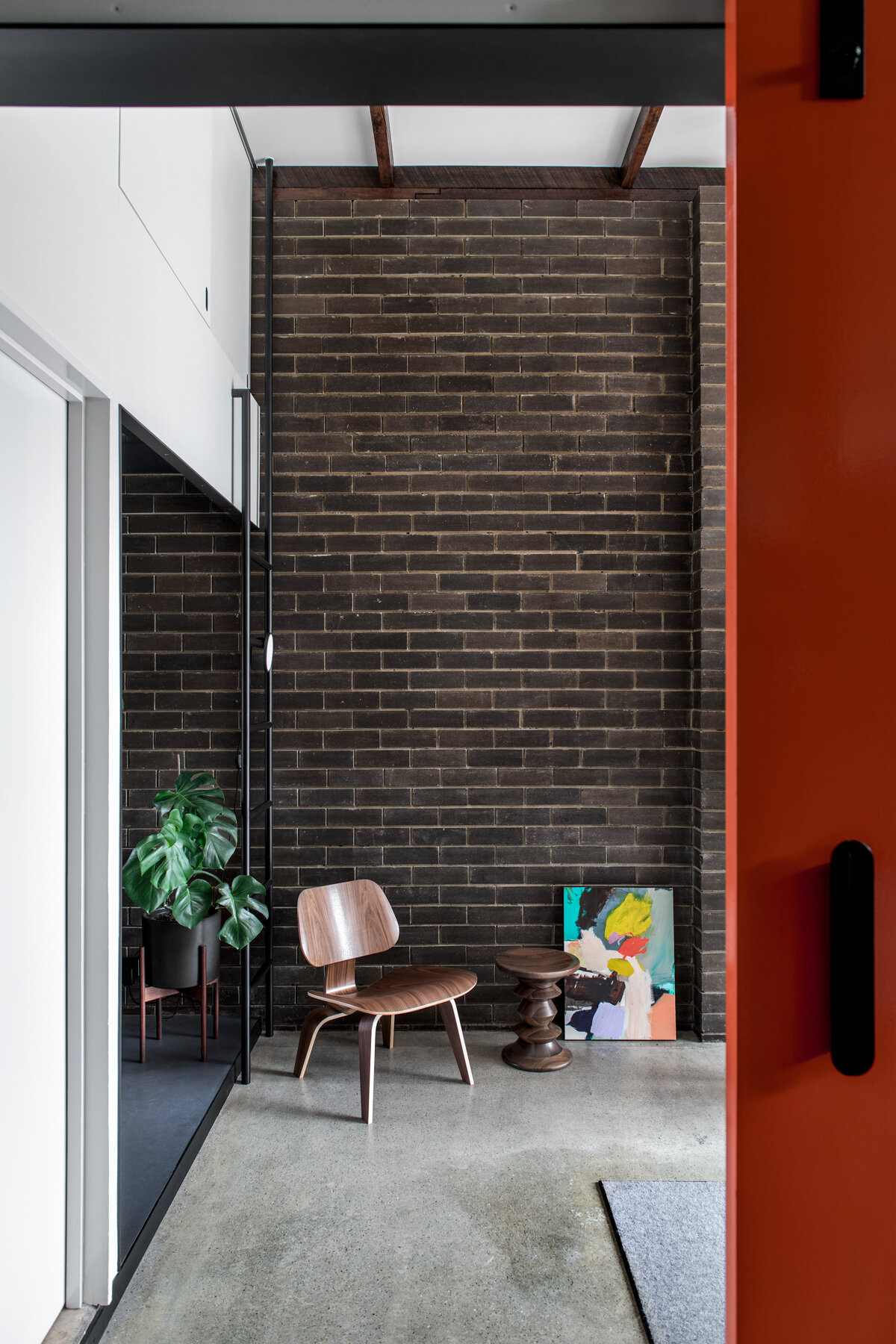 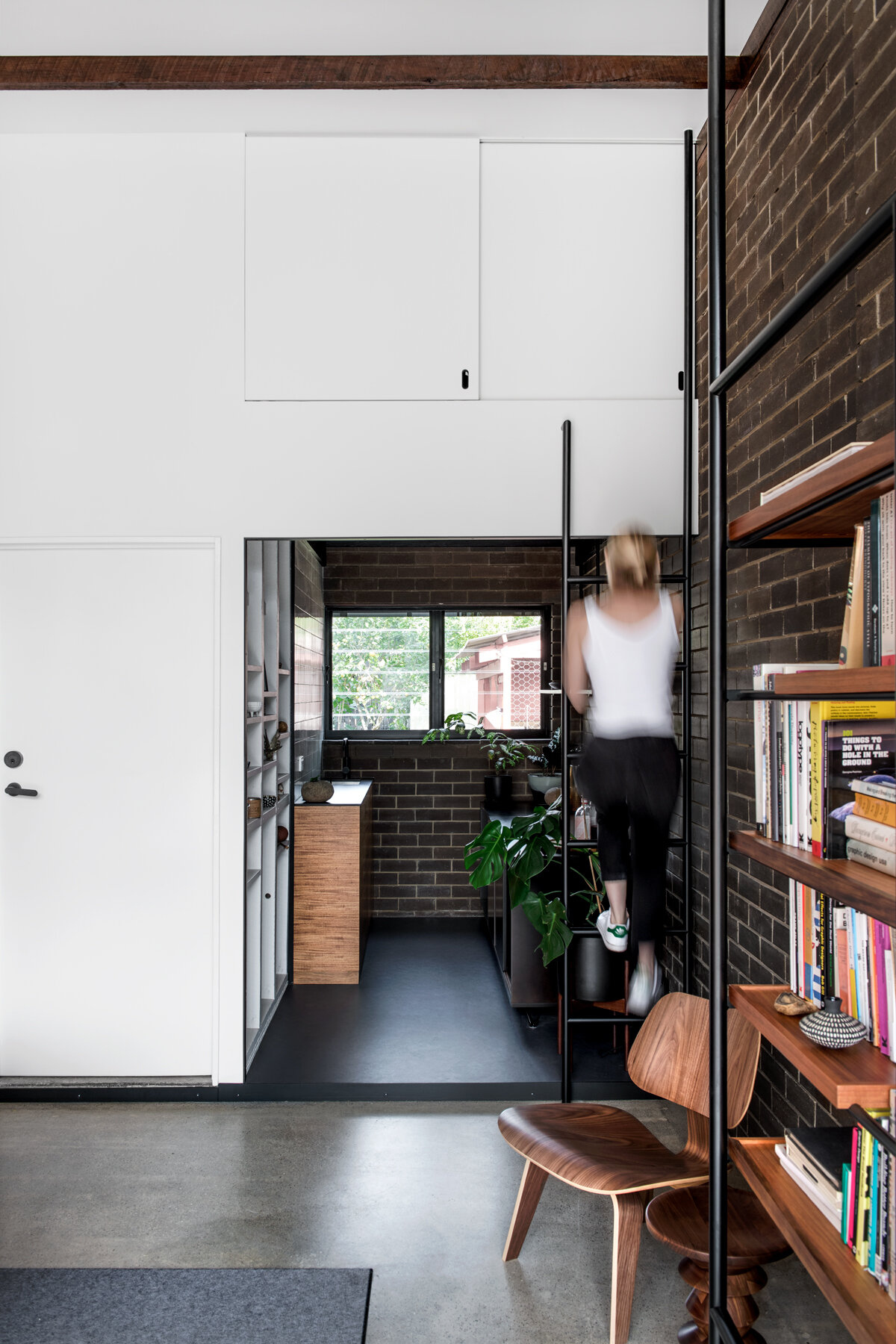 Similarly, leaving the original brick exposed and polishing back the original concrete slab doesn't just look great, but it provides a literal ton of shaded thermal mass which helps to keep the interior cooler. 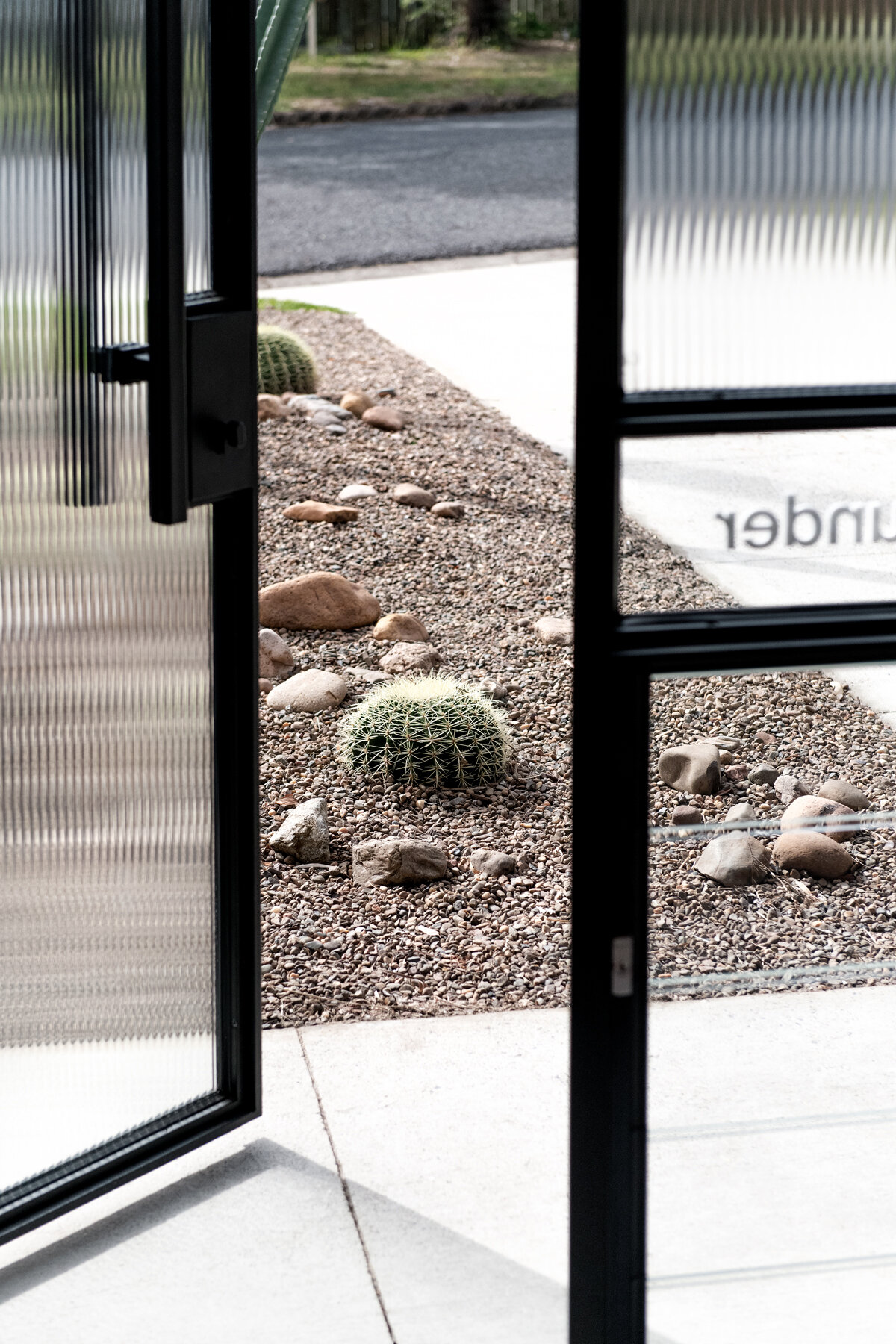 "Most creatives start their professional journeys from their bedrooms or garages", Gary jokes. In this case, he's treading a path in the opposite direction, but it's been a positive and fortuitous move. Not many people had a home office this beautiful to ride out the pandemic and now he can continue to enjoy it for many years to come.