With heritage homes, you don't want to overshadow the original home. Instead, new spaces should work in synergy with the original, creating a new home that looks, feels and functions better than either old or new could have alone. That's what PLY/ Architecture has achieved with NTH/ House by designing an addition that seeks out sun, space and the backyard to create a comfortable family home... 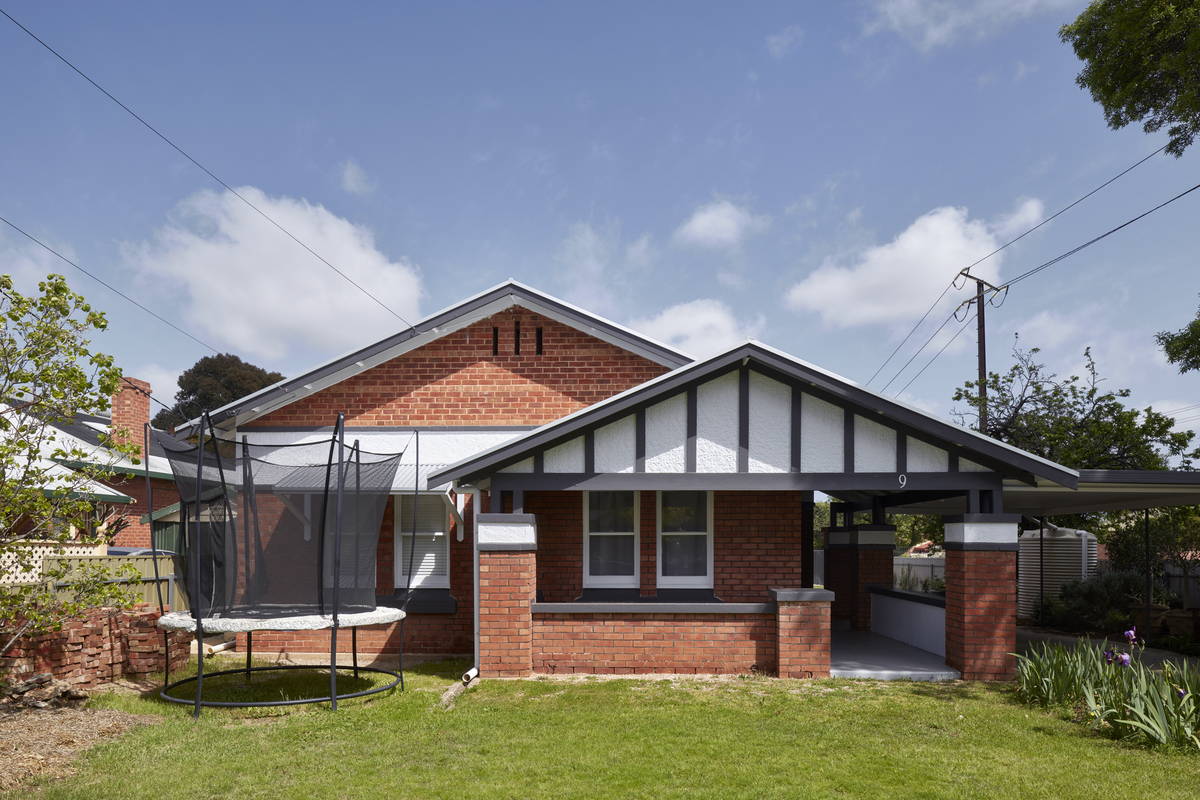 In the leafy suburb of Colonel Light Gardens in Adelaide, rows of state heritage bungalows create picturesque streetscapes. But no matter how picturesque, this young family were quickly outgrowing the red brick walls of their bungalow. The architects considered various options for how this bungalow might grow and were naturally cautious to preserve the street appeal of the home. Luckily, the block was big enough that an unobtrusive, single-storey addition could cascade into the backyard. 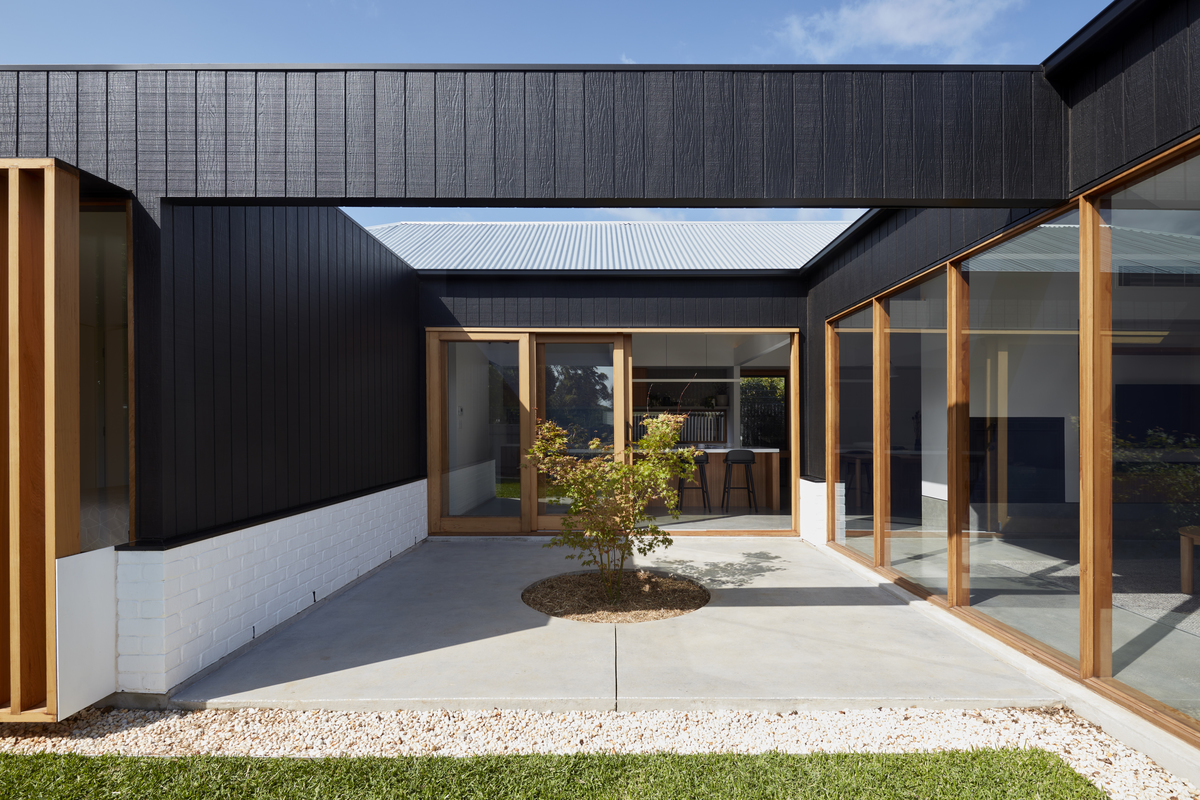 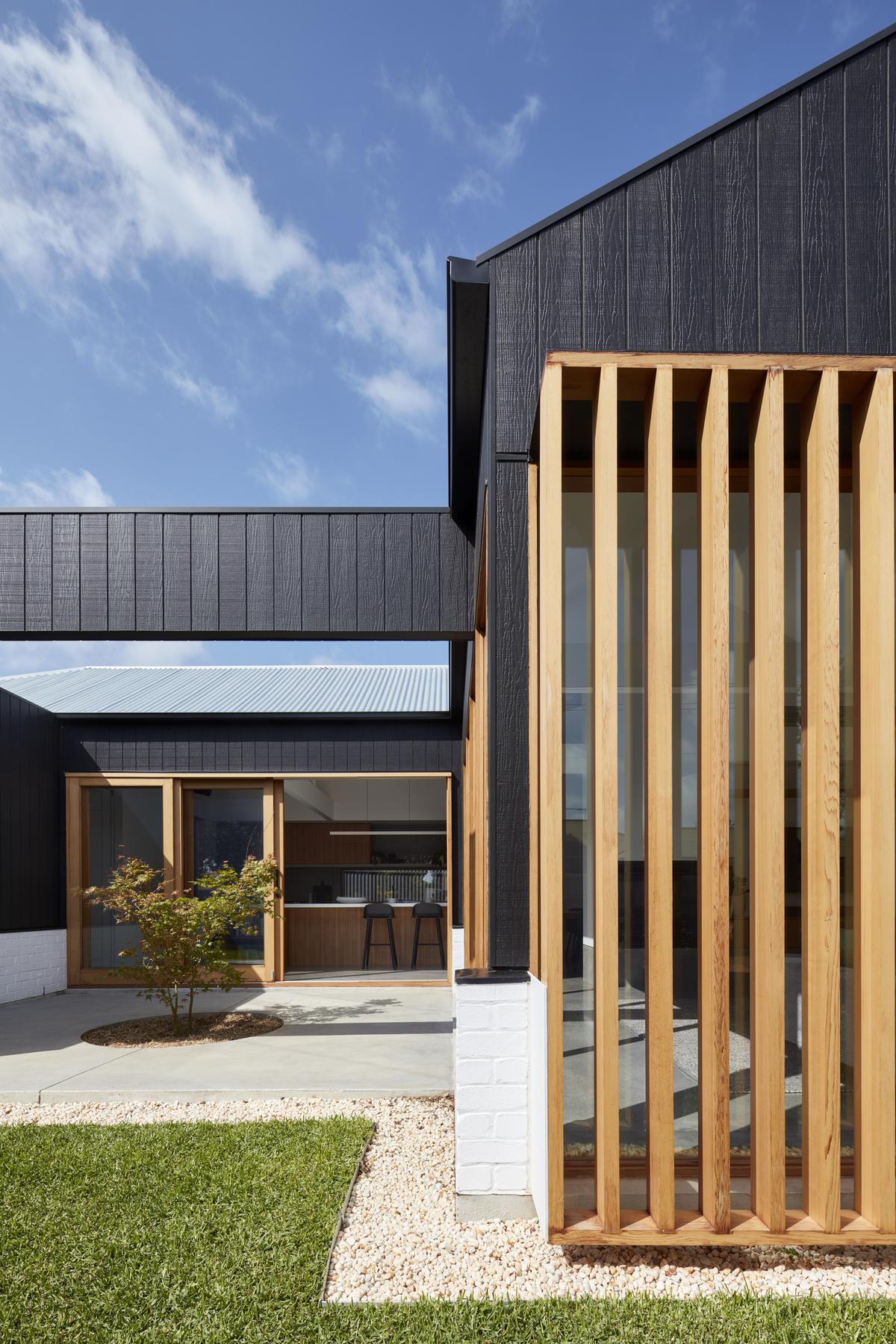 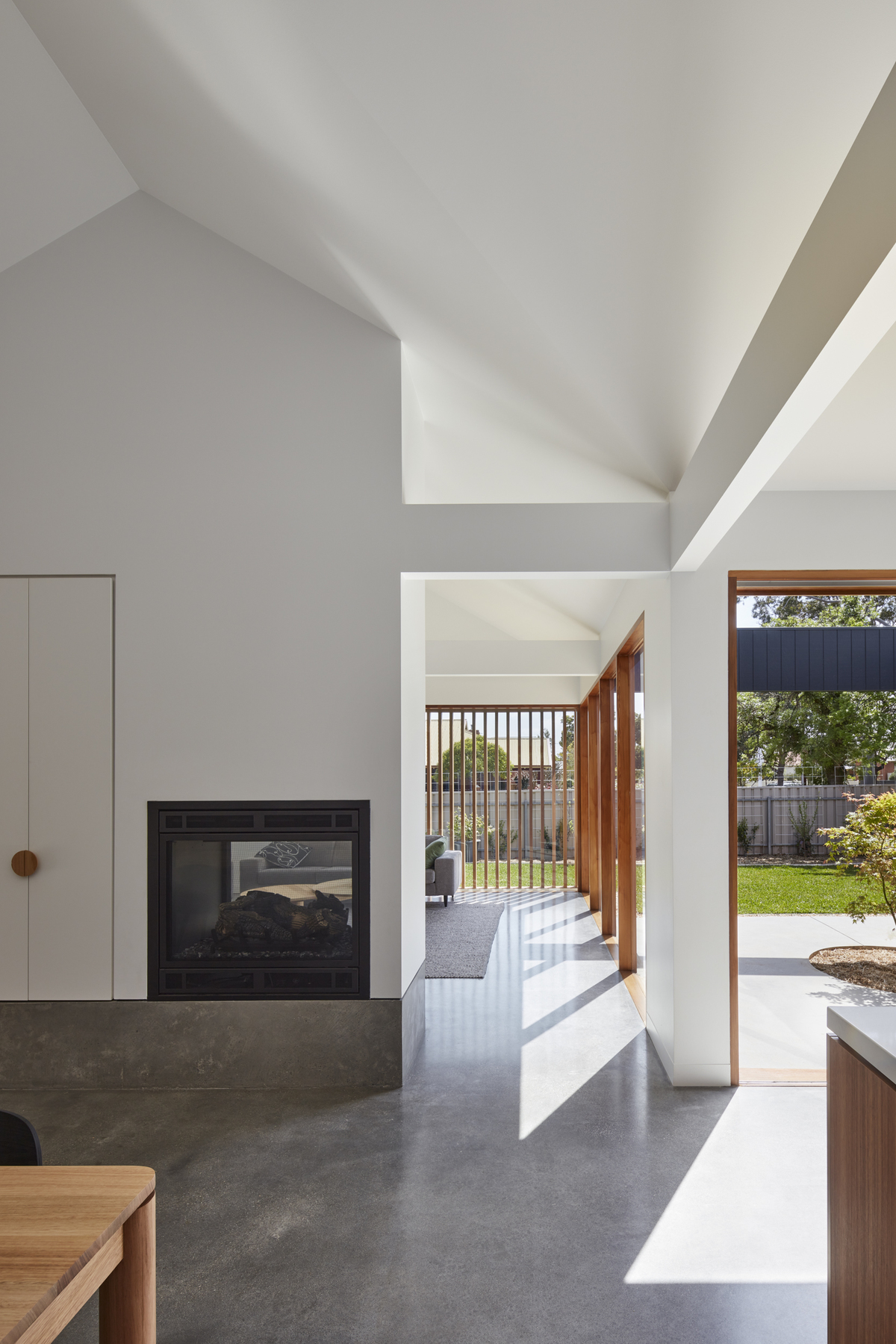 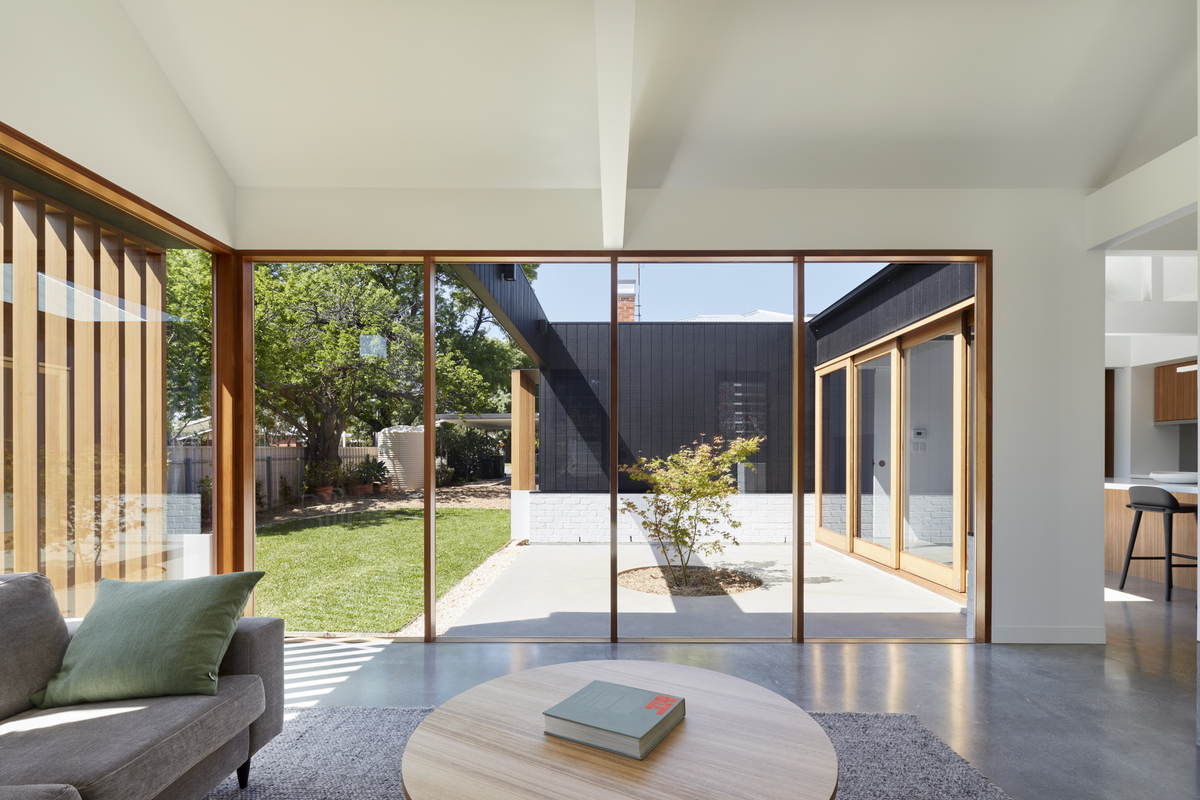 The original home is transformed into bedrooms, a retreat and ensuite and bathroom which leaves the addition home to a new main bedroom, laundry, open-plan living areas and a covered outdoor living space. These rooms wrap in a u-shape around a central courtyard, designed to bring light, breezes and a slice of the backyard indoors. Eventually, a deciduous tree planted in the centre of the courtyard will grow to shade the home in summer, while still letting light in during winter, not to mention providing a lush outlook from all rooms. 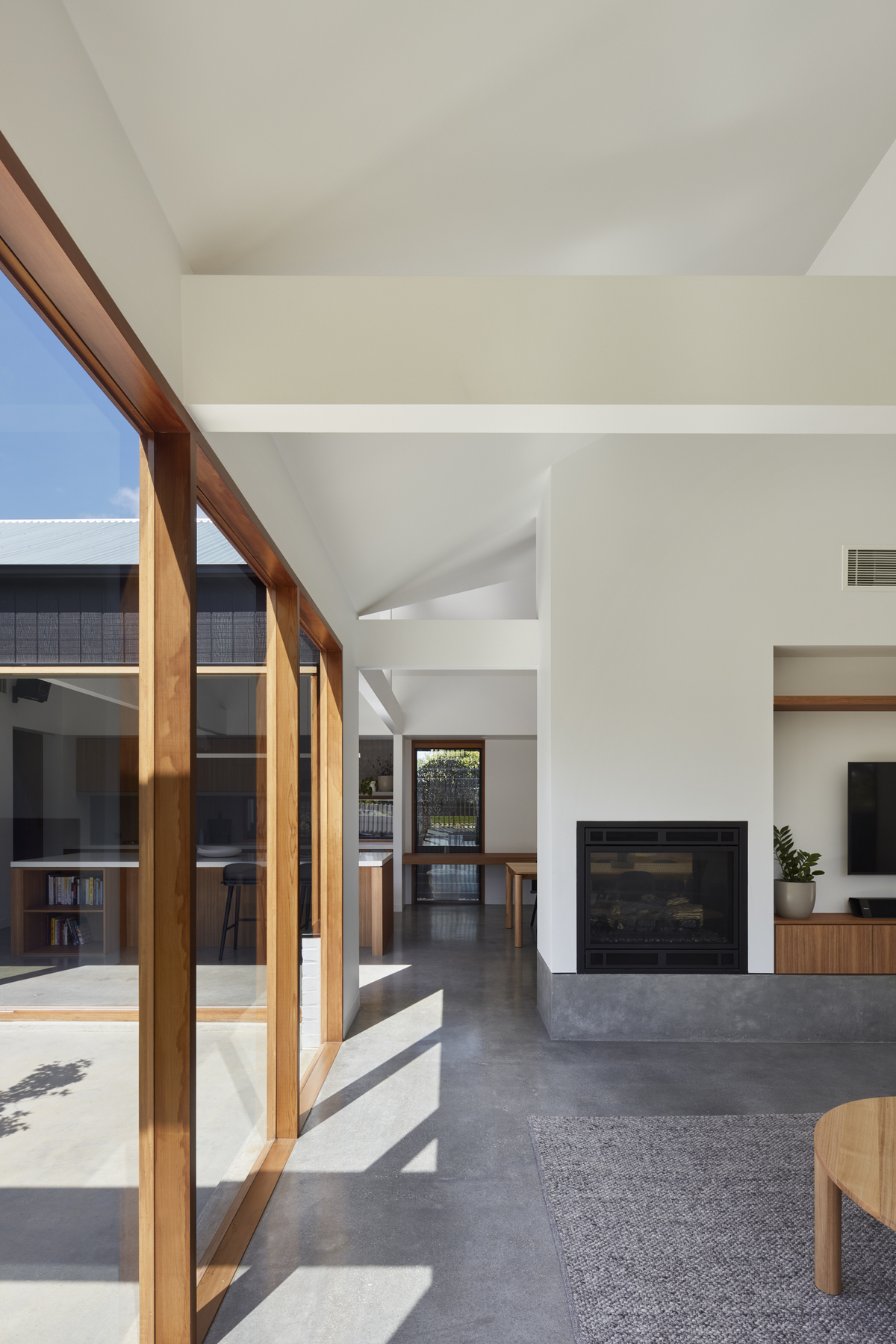 Honed concrete floors are a low-maintenace option for family living and they soak up the winter sun to passively heat the home during winter. Thanks to careful shading and cross-flow ventilation, the concrete keeps the home cooler in summer, too. A double-sided fireplace opens into the lounge and dining area for extra warmth and atmosphere in the cooler months. 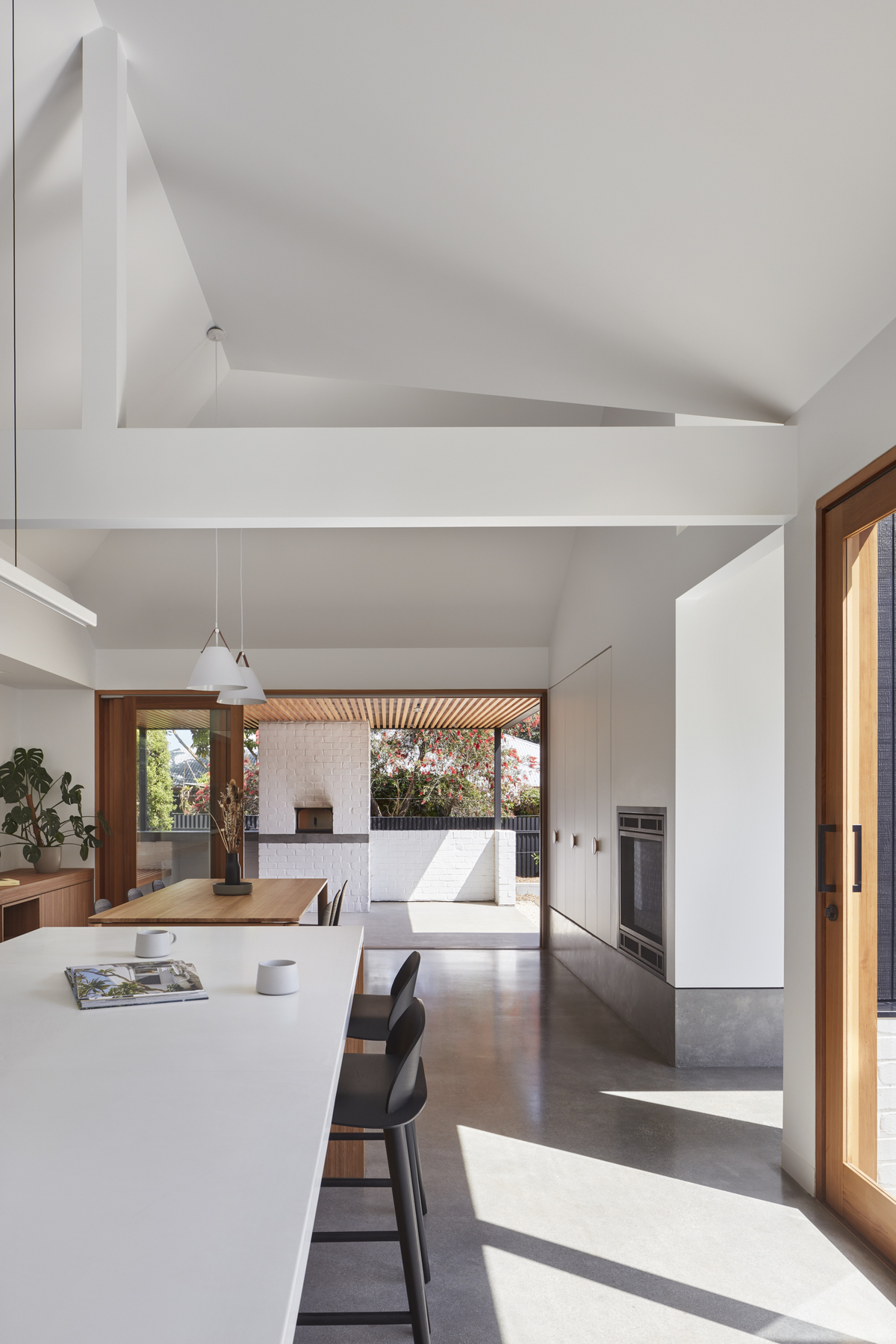 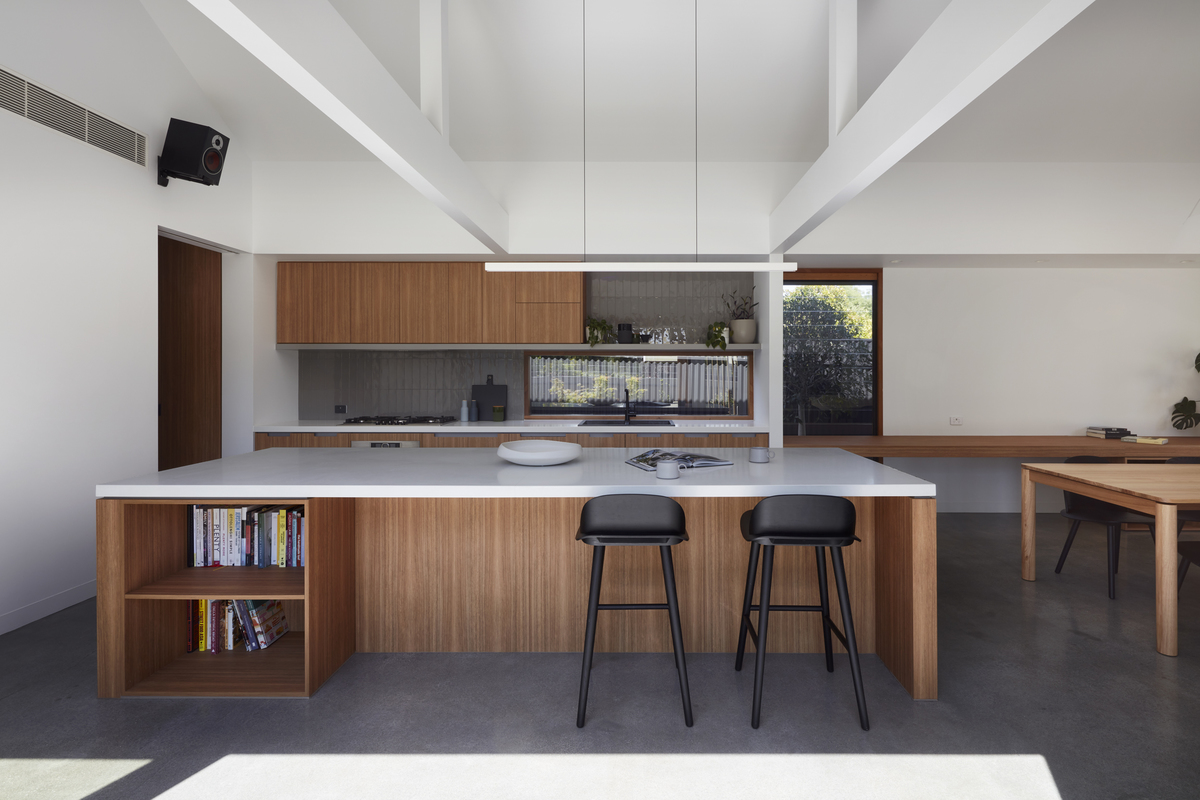 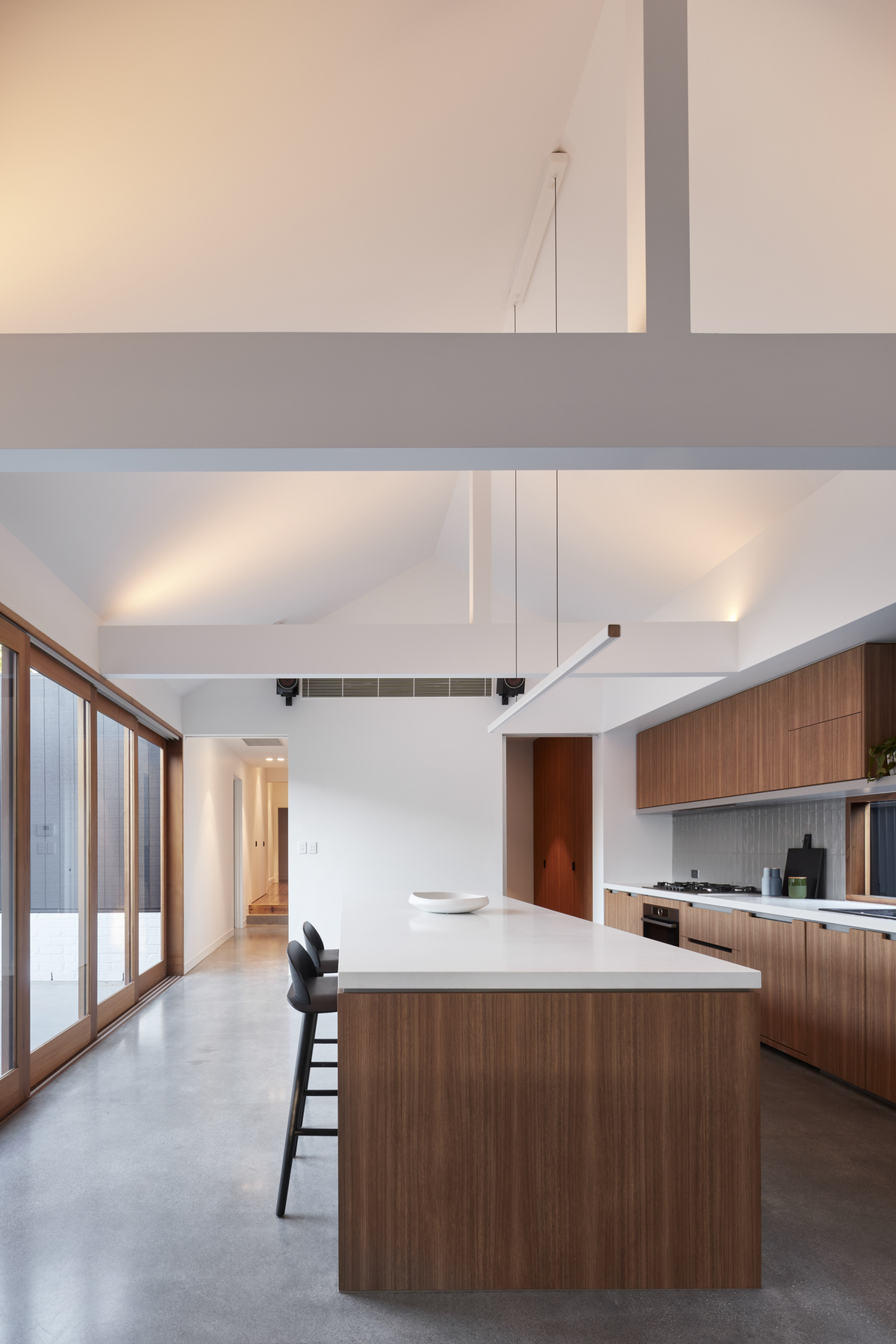 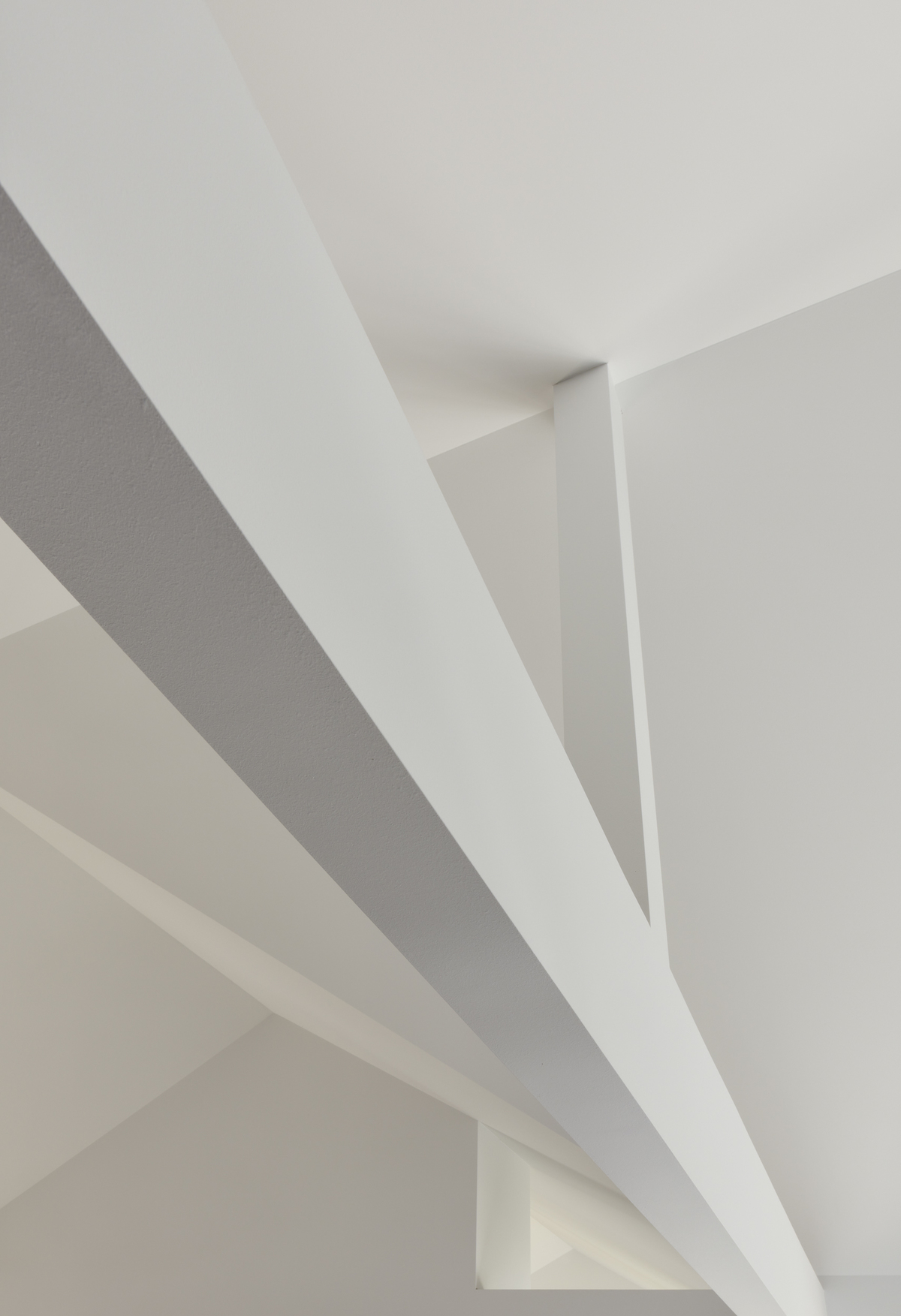 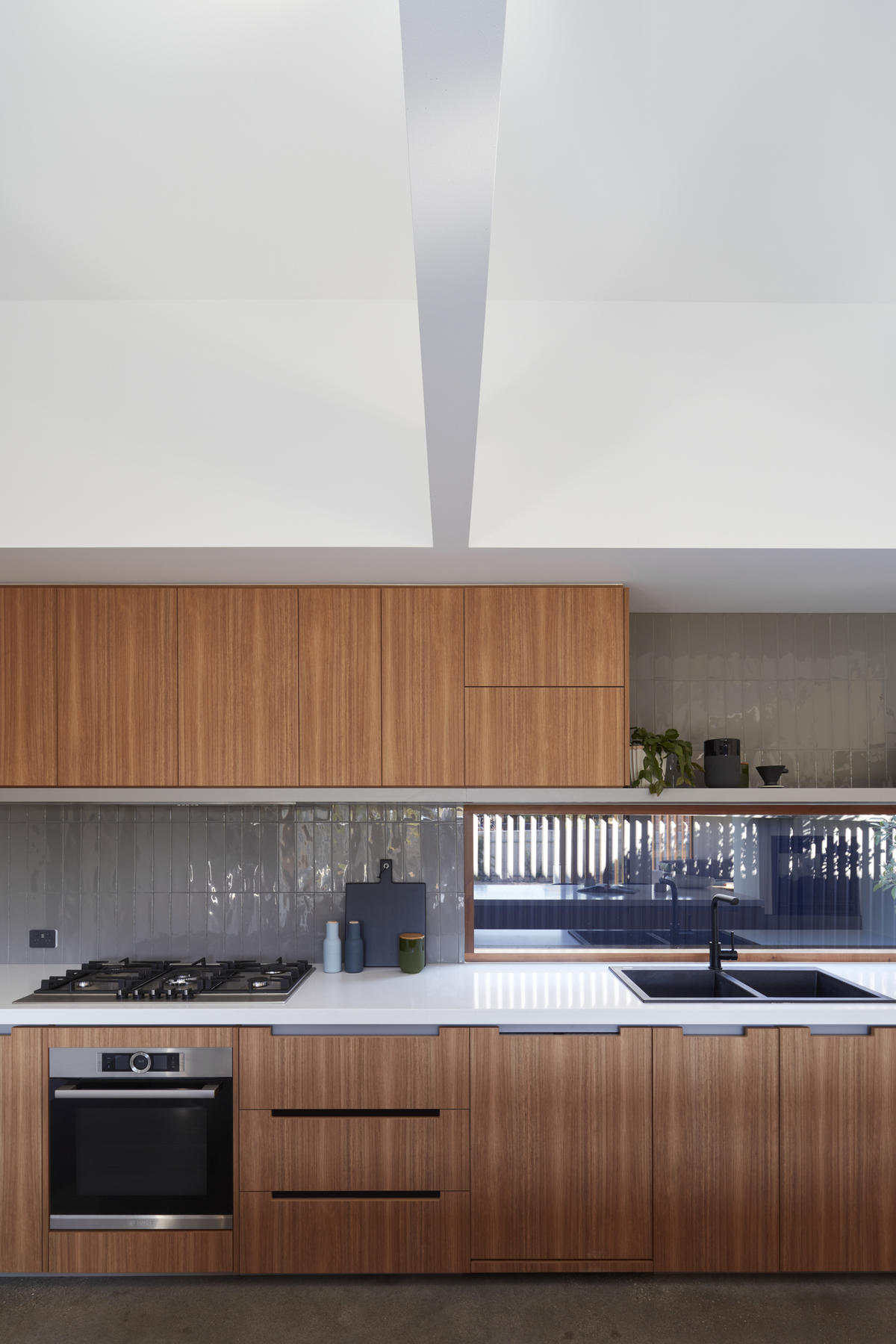 Cathedral ceilings provide an extra dimension of space in the addition. Overhead, the structural logic of the addition is celebrated, with trusses breaking the volume of the ceiling and helping to define spaces in the otherwise open-plan arrangement. With white walls and timber joinery, the interior palette in neutral yet warm. 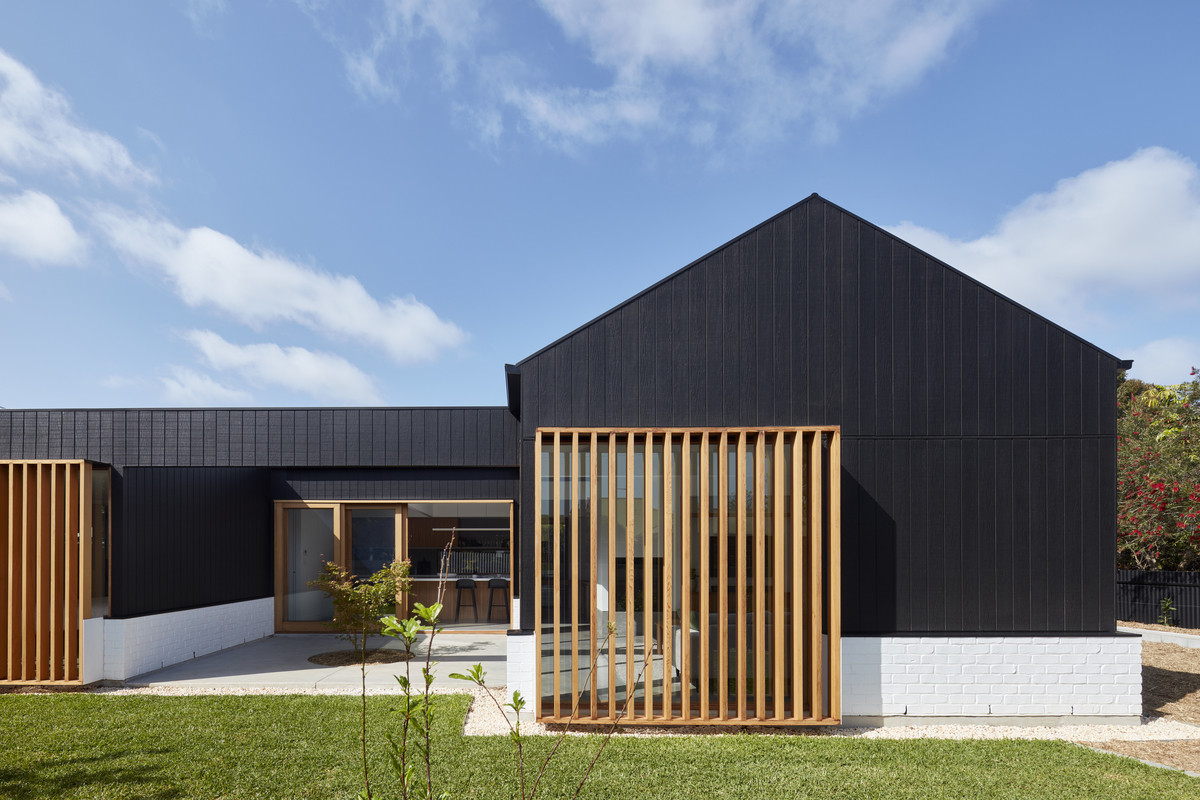 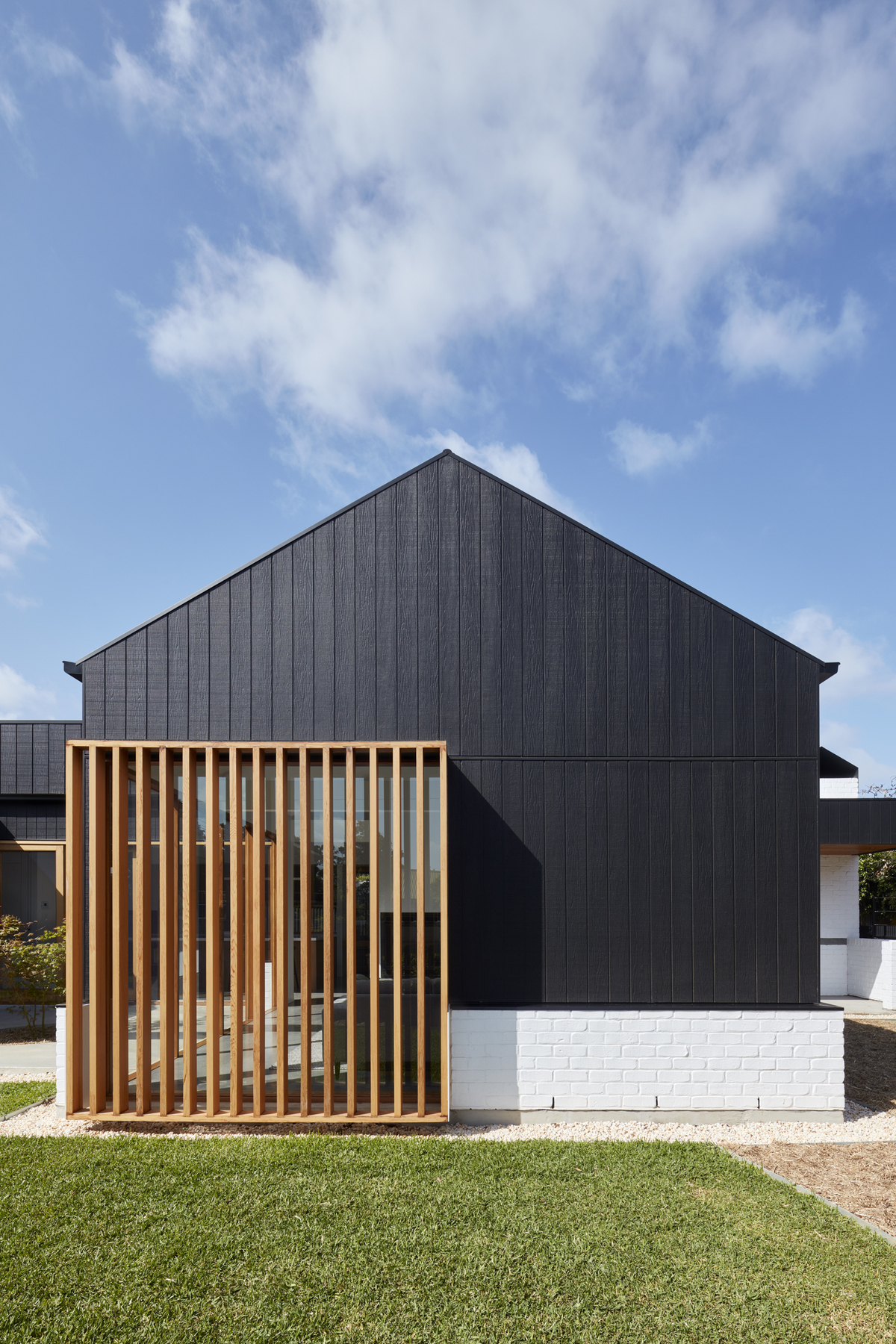 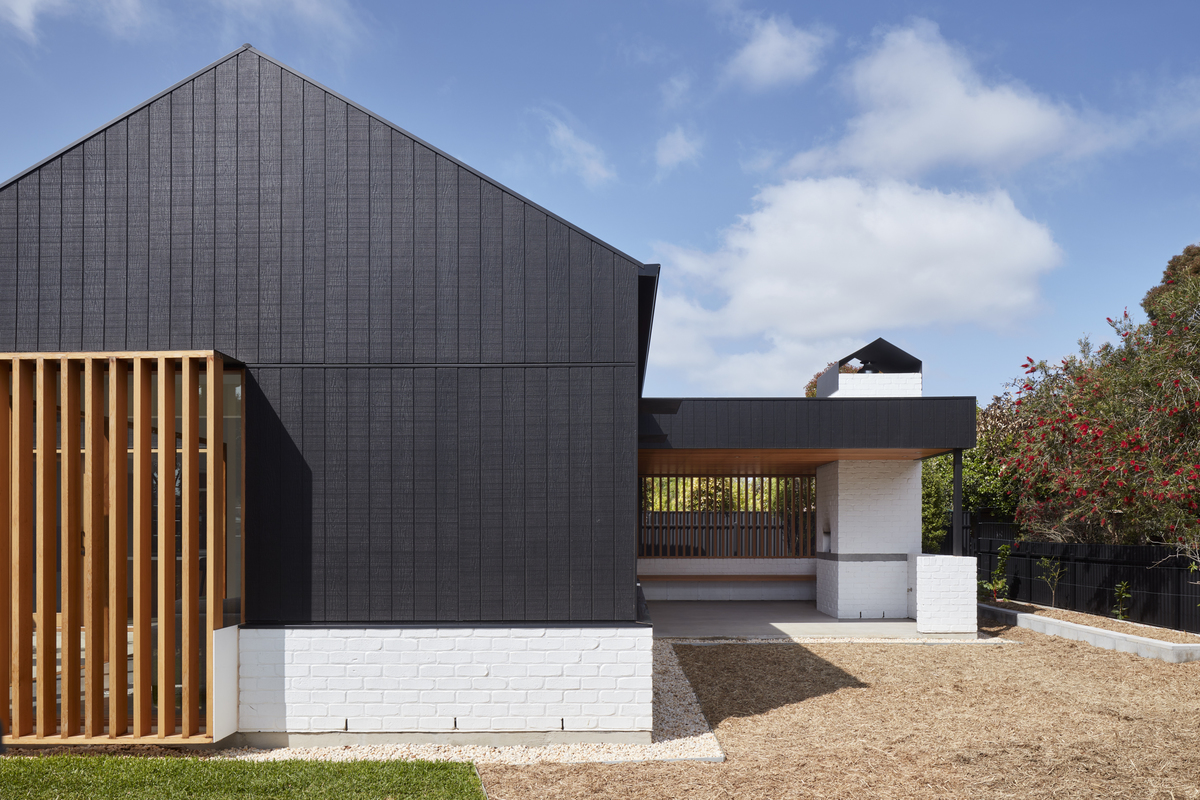 A podium of white-painted tumbled bricks wraps around the base of the addition, tying it into the original brick home, while not replicating the original. In fact, the materials and colour scheme are all designed to link old and new while simultaneously differentiating them. The upper portion of the addition is clad in black Weathertex, a rough-sawn timber cladding, a nod to the bungalow's timber detailing, but a thoroughly modern appearance. Even the gable of the addition matches that of the bungalow, but in this case, it's more like a silhouette than a replica. Timber screens on windows shade the home from the heat of the sun and protect its privacy from the adjoining street, while still allowing light and views in. 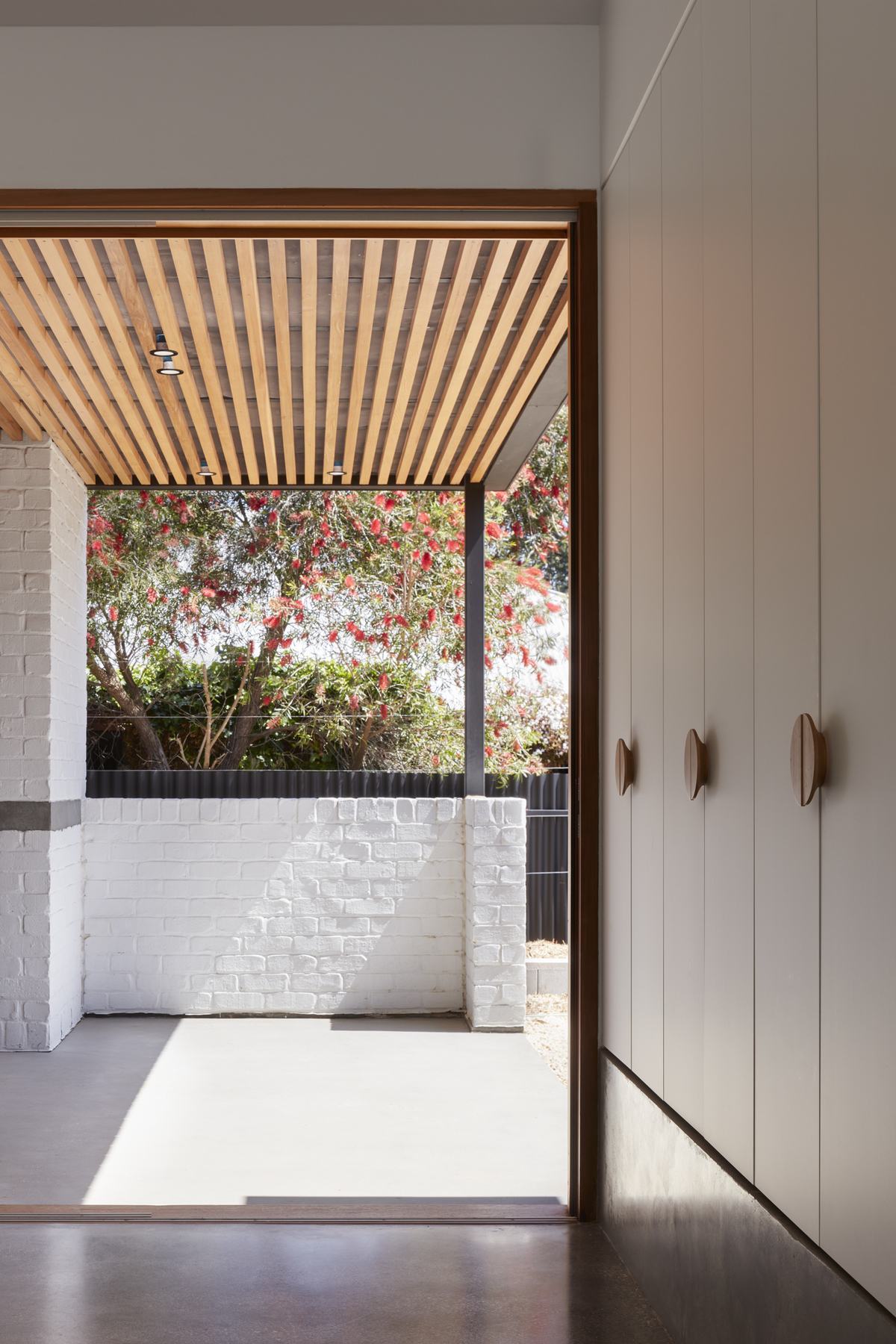 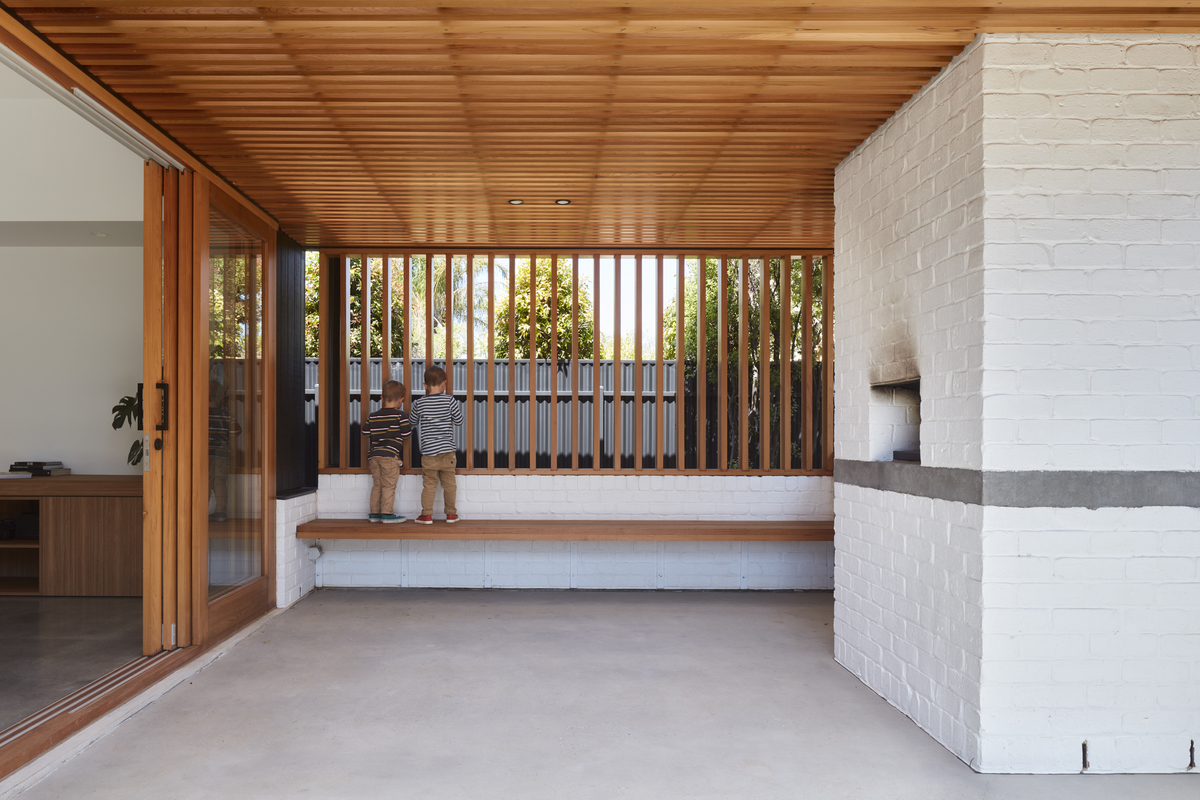 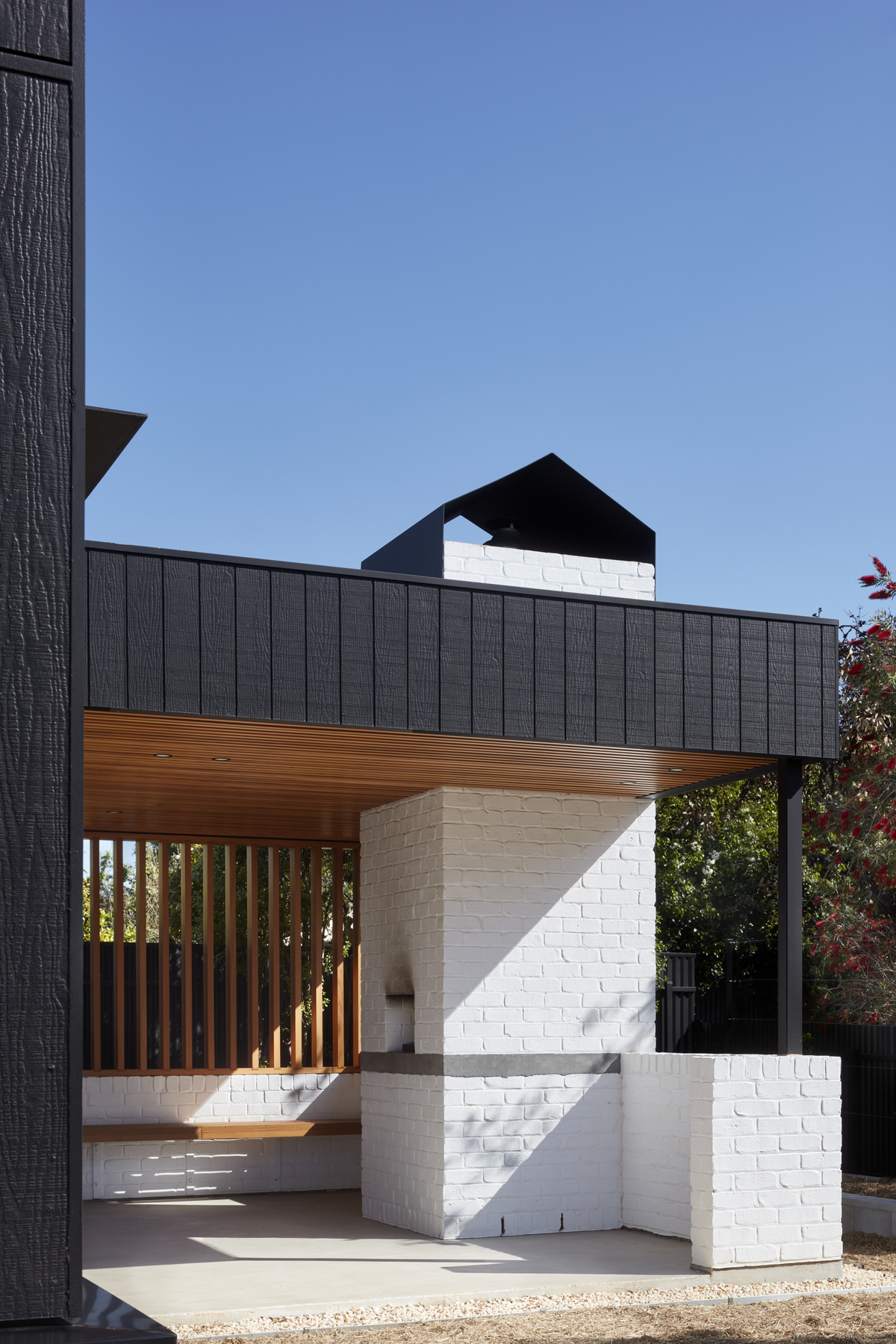 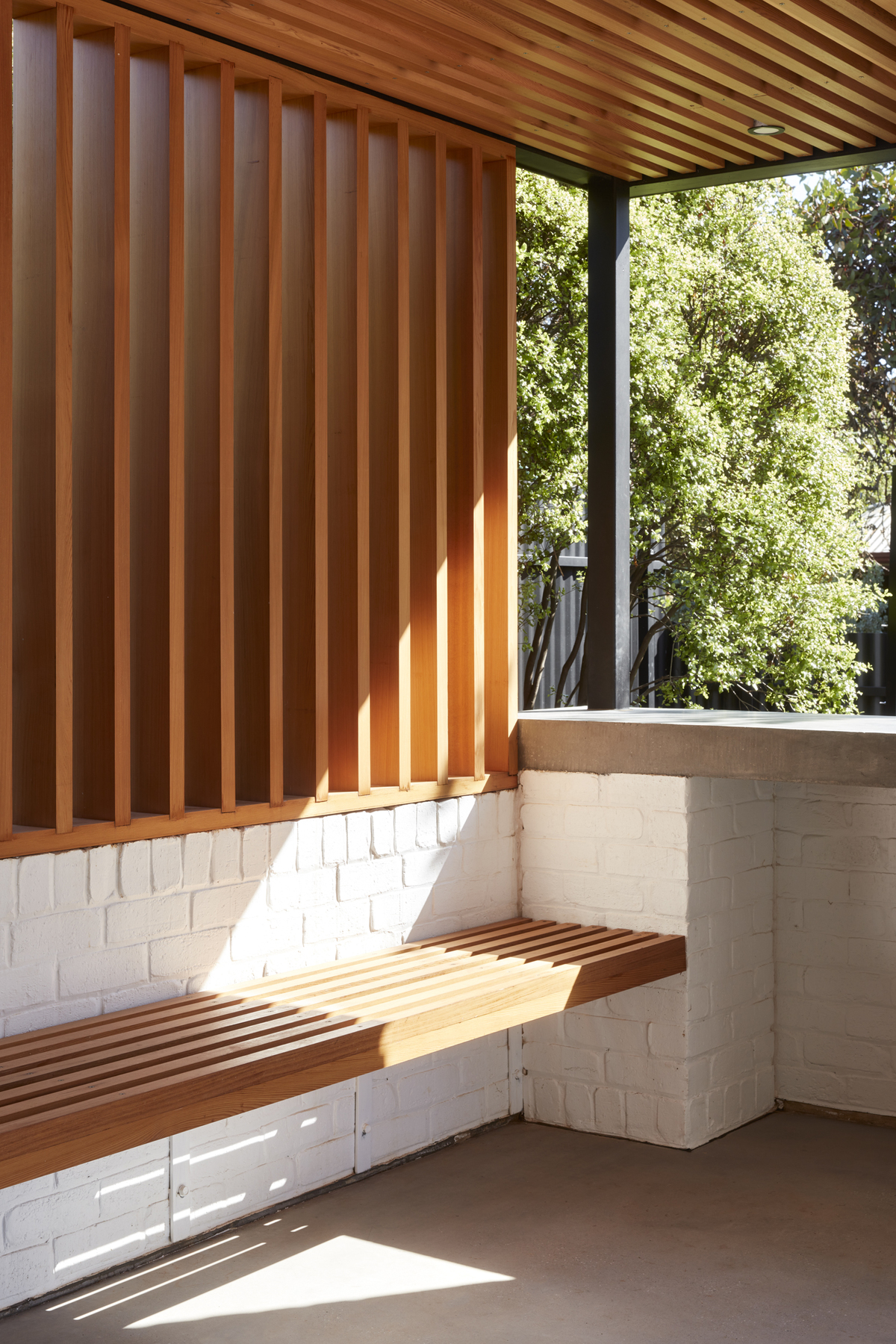 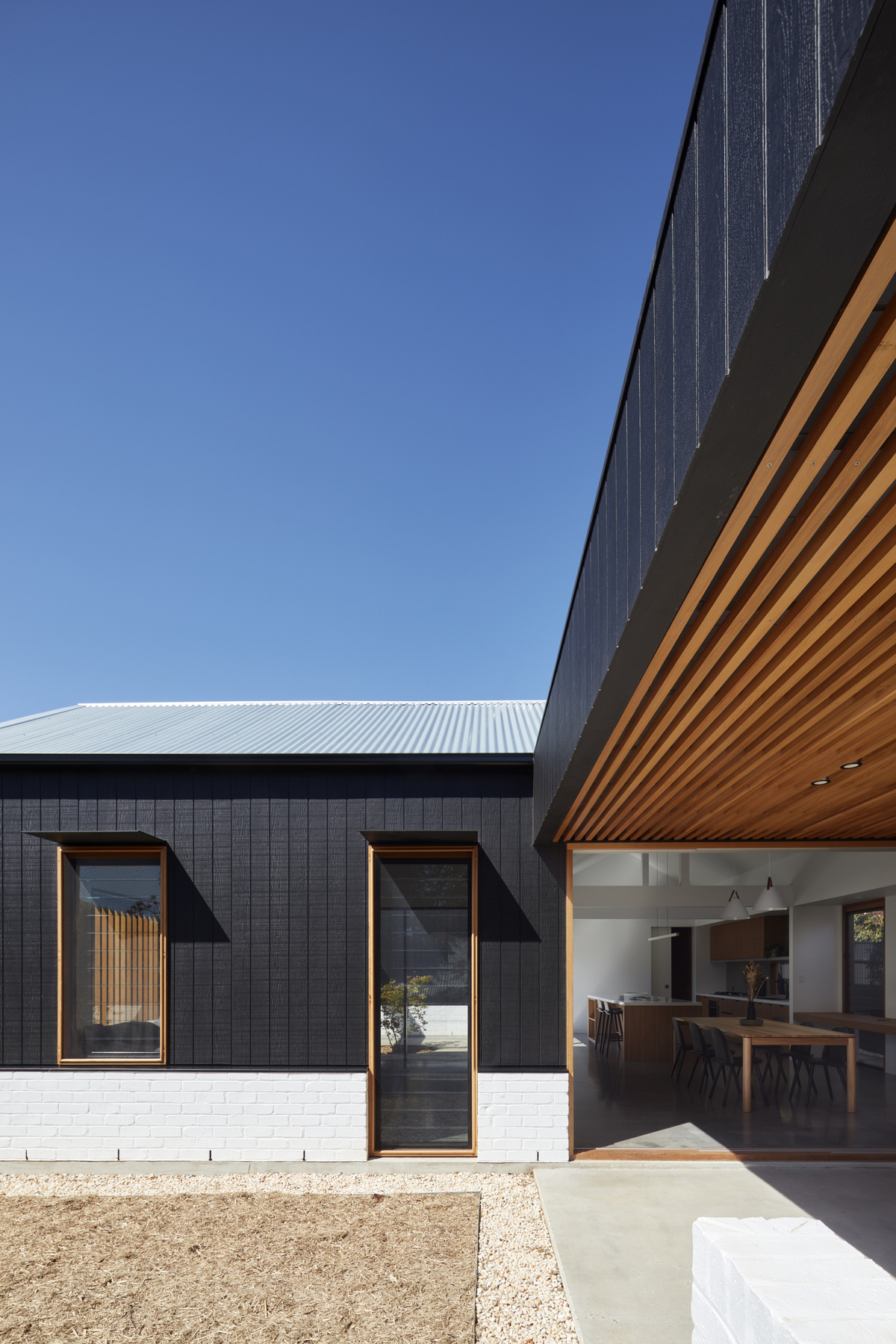 The covered outdoor space in an extension of the kitchen and dining area, making in natural to spill outside for meals and casual family time. Being an all-weather space and with a built-in fireplace, it means the family can spend more time outdoors. 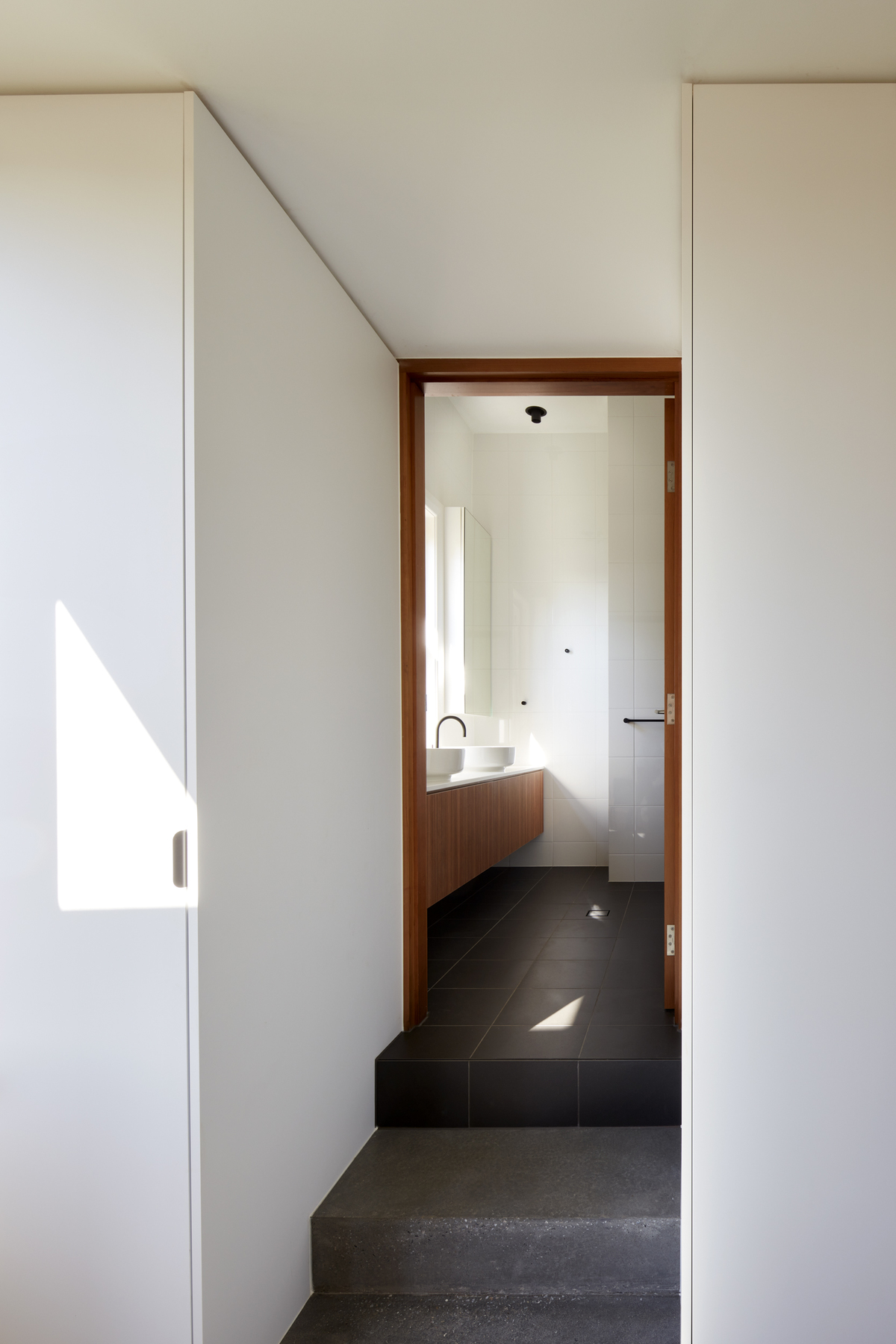 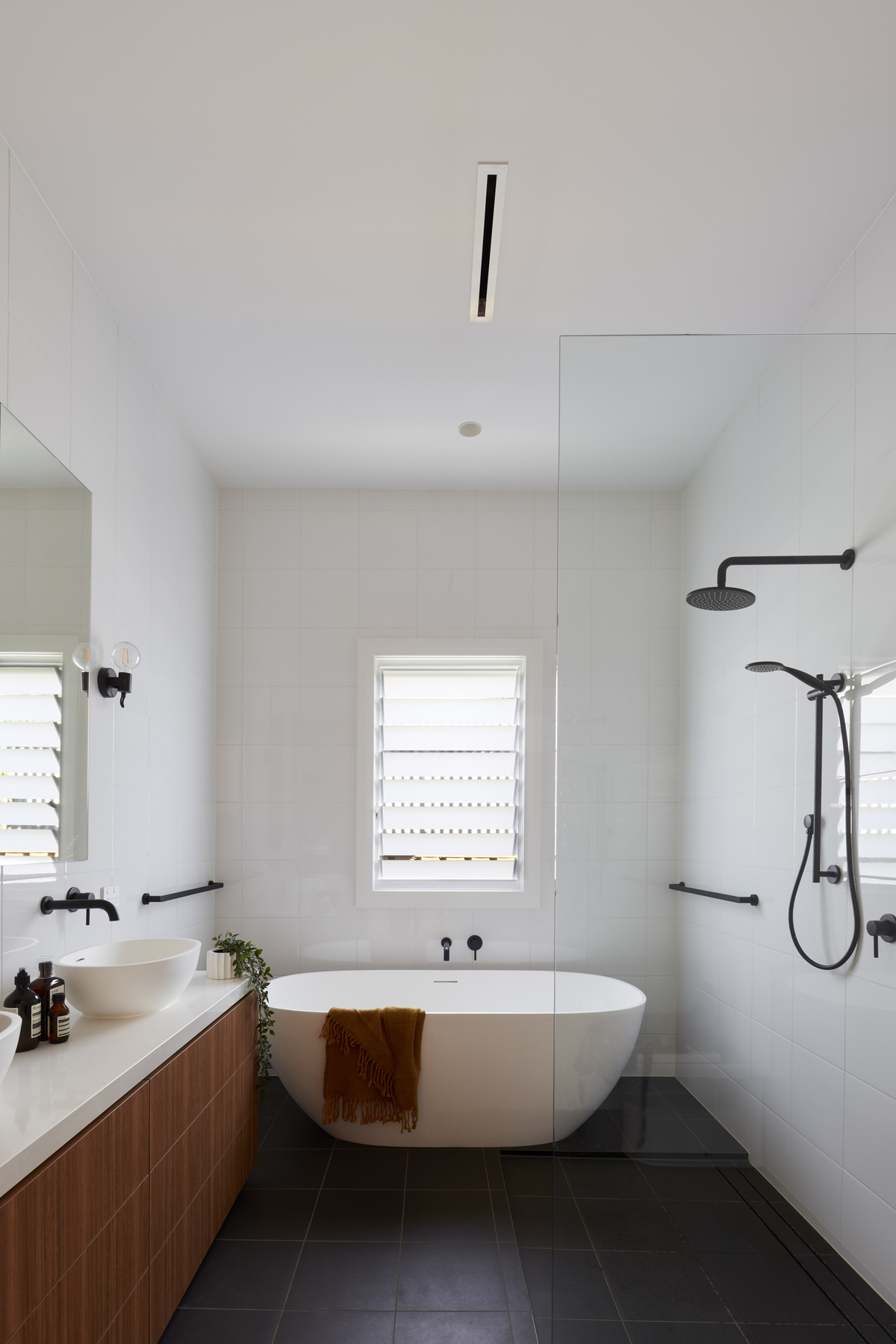 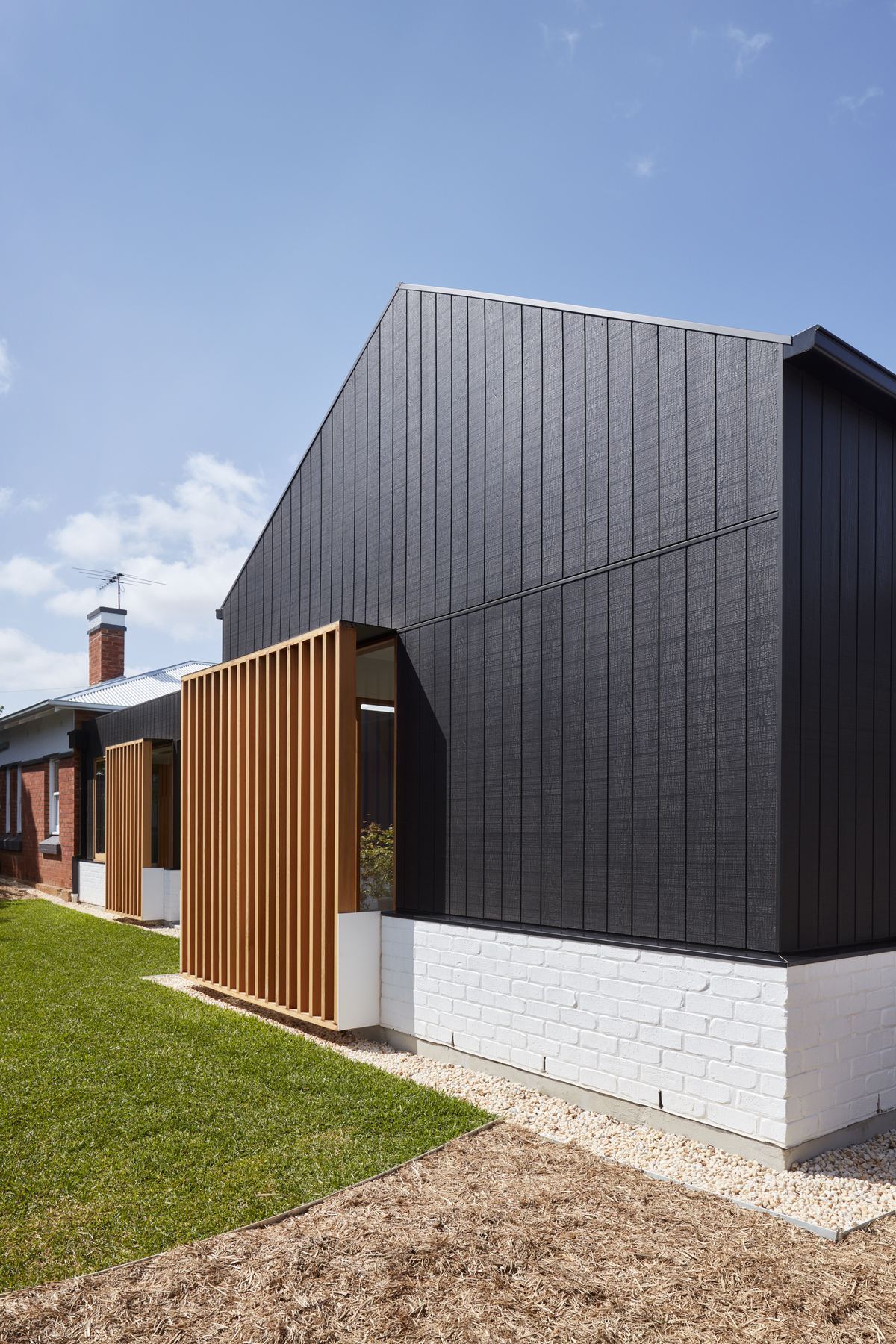 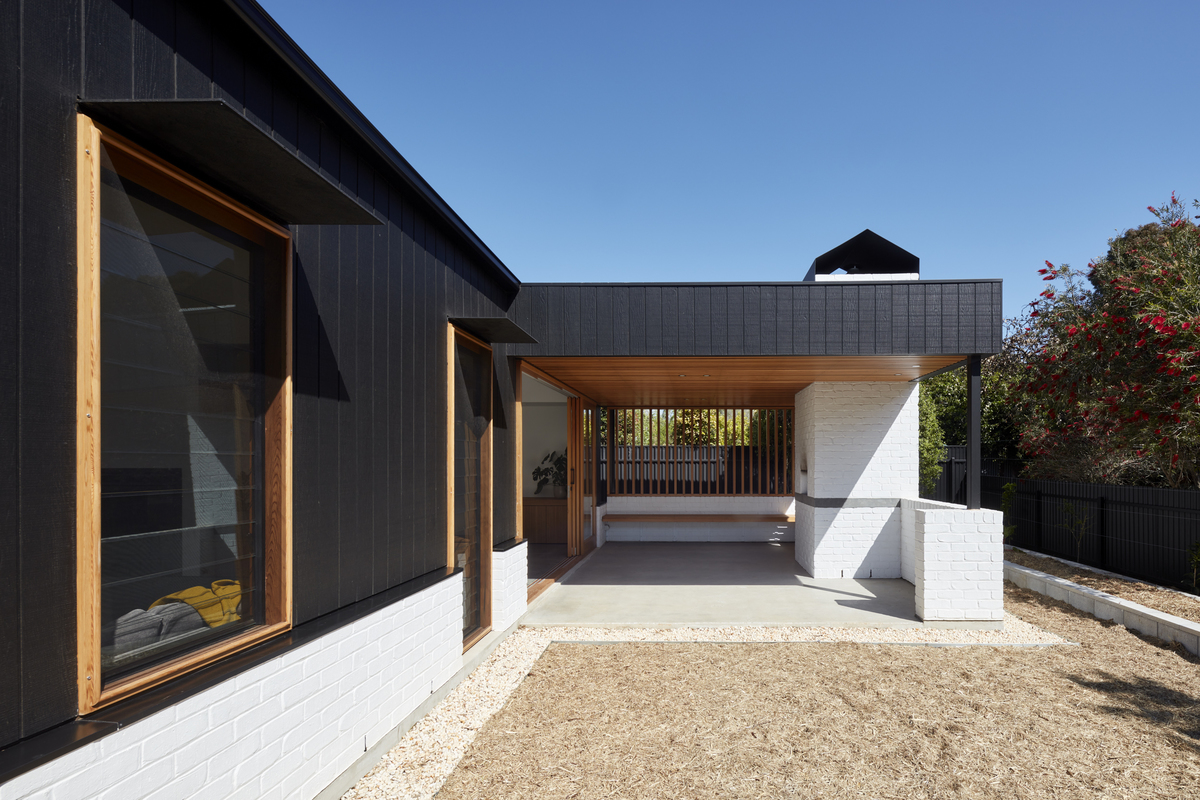 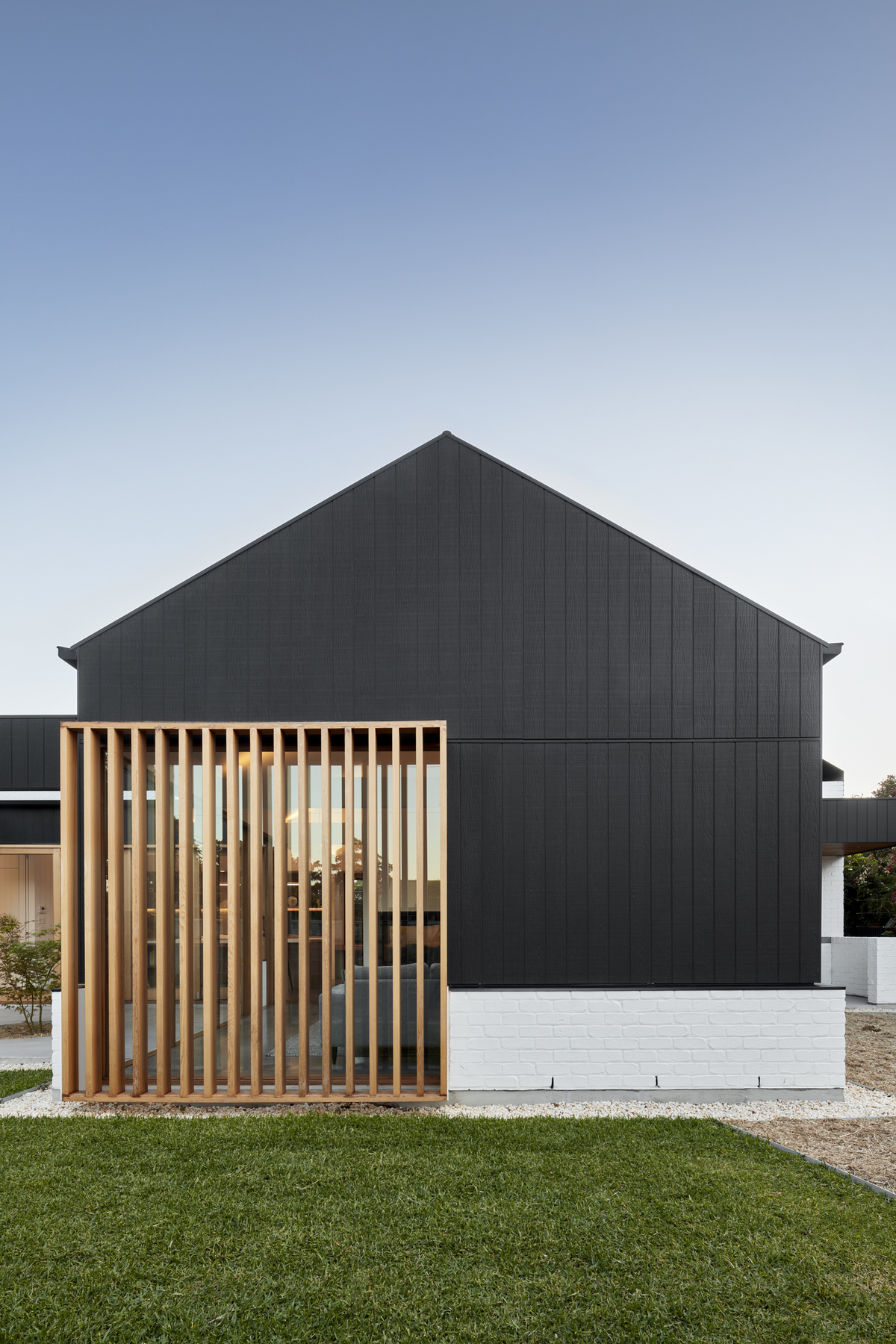 By seeking out more sun, space and creating a strong connection to the outdoors, this stunning addition offers the original bungalow something it lacked before. Now, both and new are all the better for the presence of each other. Rather than overshadowing, this addition balances and complements the original bungalow. 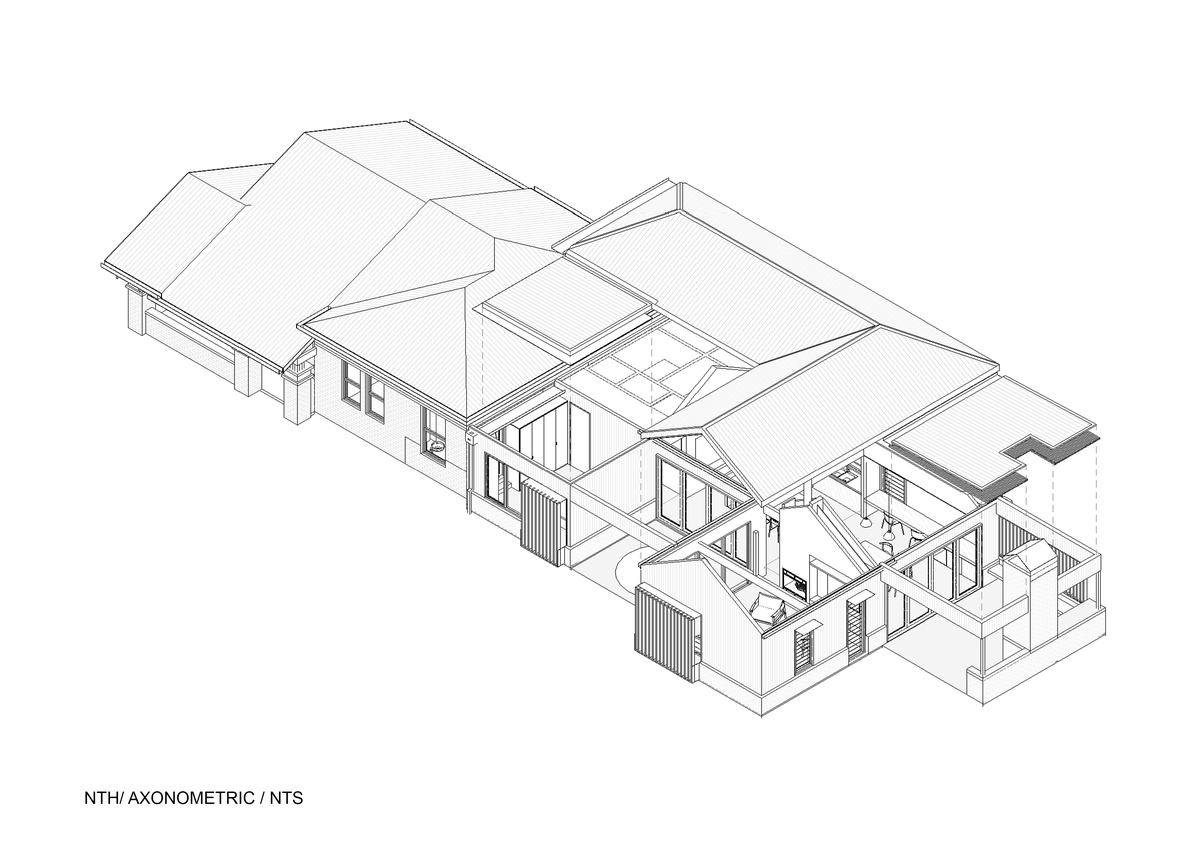 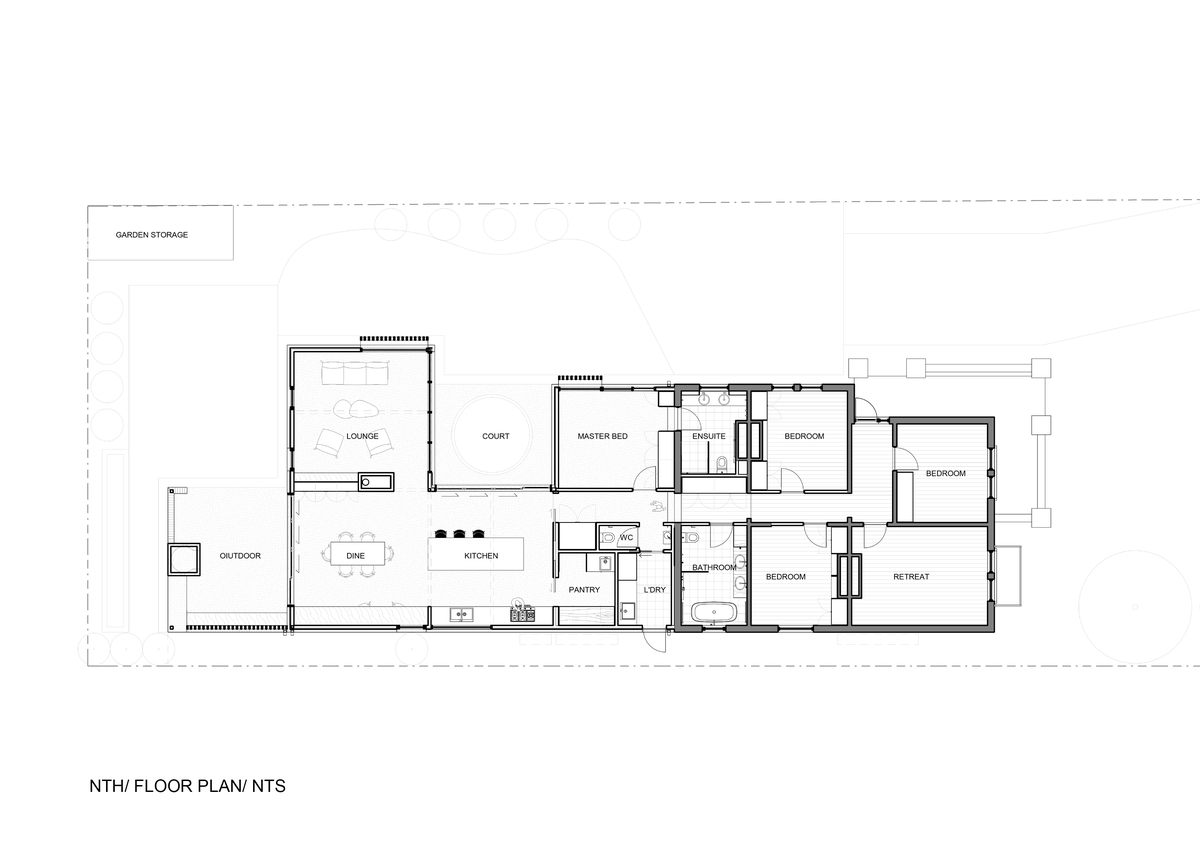 Tell us what you love about NTH/...