Ask Michael O'Sullivan and his partner Melissa Schollum how you prepare for living in a small house and they'll tell you, 'live somewhere even smaller'! For two years they lived in a tiny converted portable classroom while Michael, an Architect from Bull O'Sullivan Architecture, built their home. So the upgrade to their new two bedroom family home feels like a major upgrade… 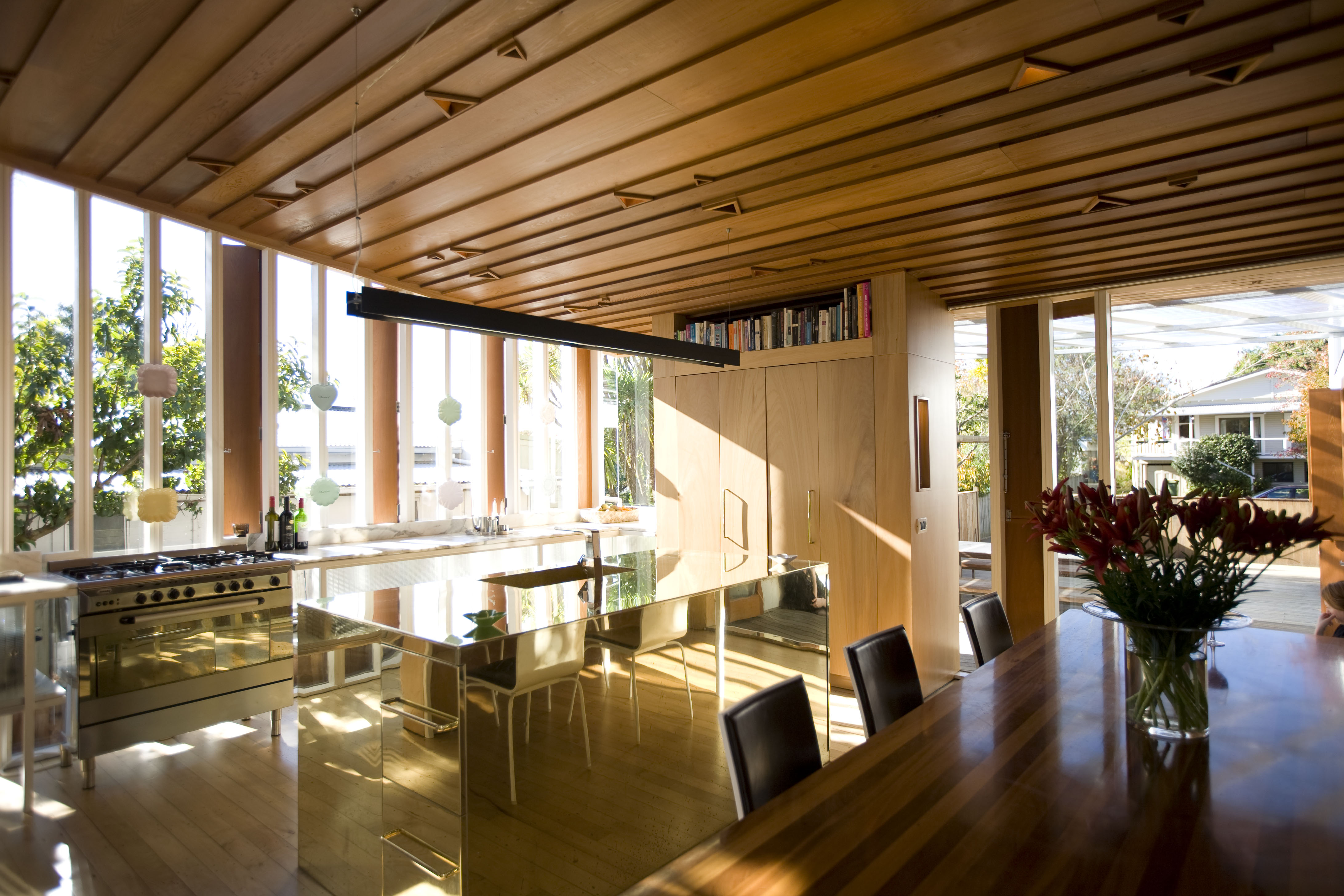 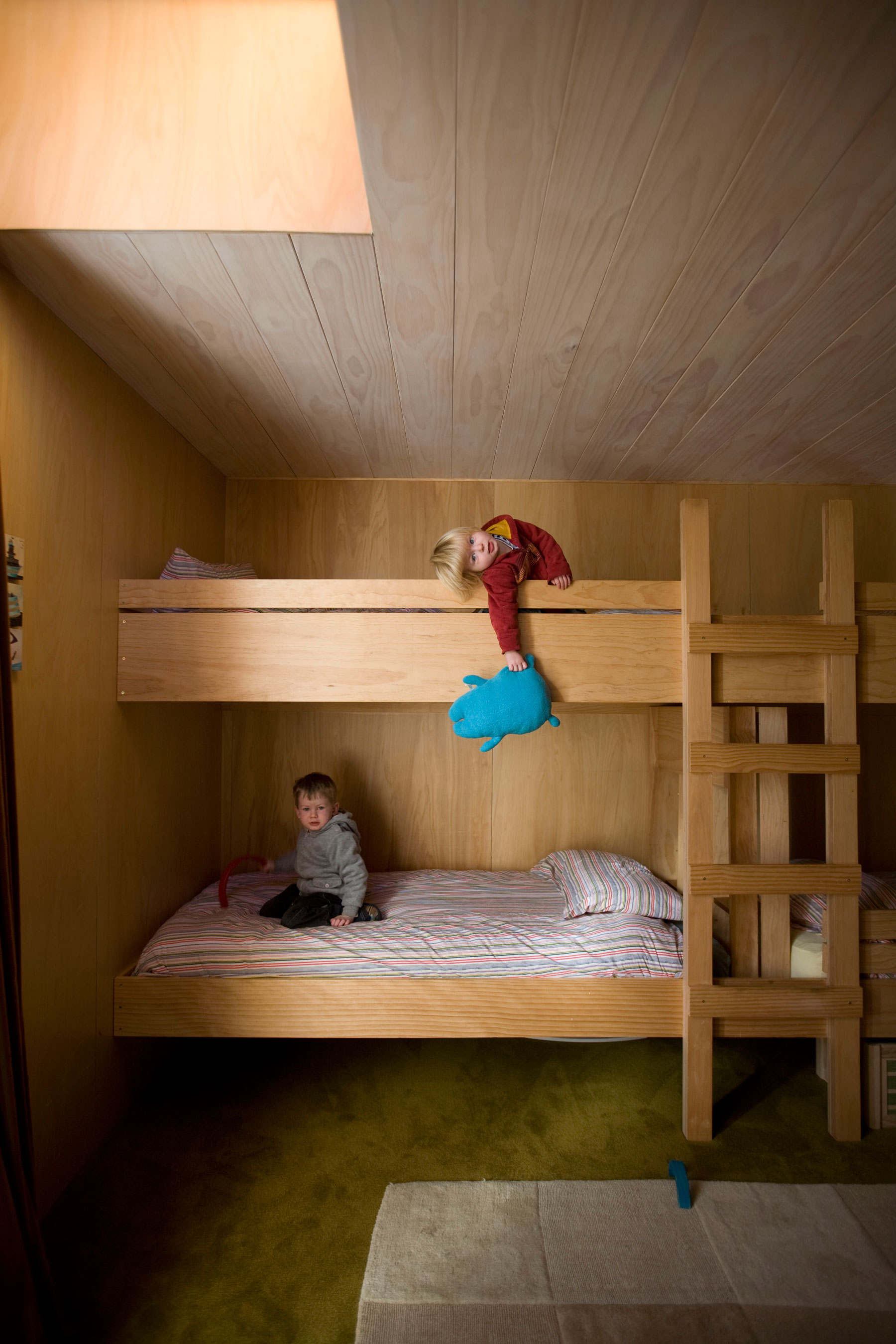 The house Michael designed and built for himself, Schollum, and their three young children in Auckland, New Zealand, has just two bedrooms (the three kids have a fun bunkroom they all share) and is a modest 110 square meters. But compared to the classroom which was less than half that size? Their new home feels luxuriously spacious! 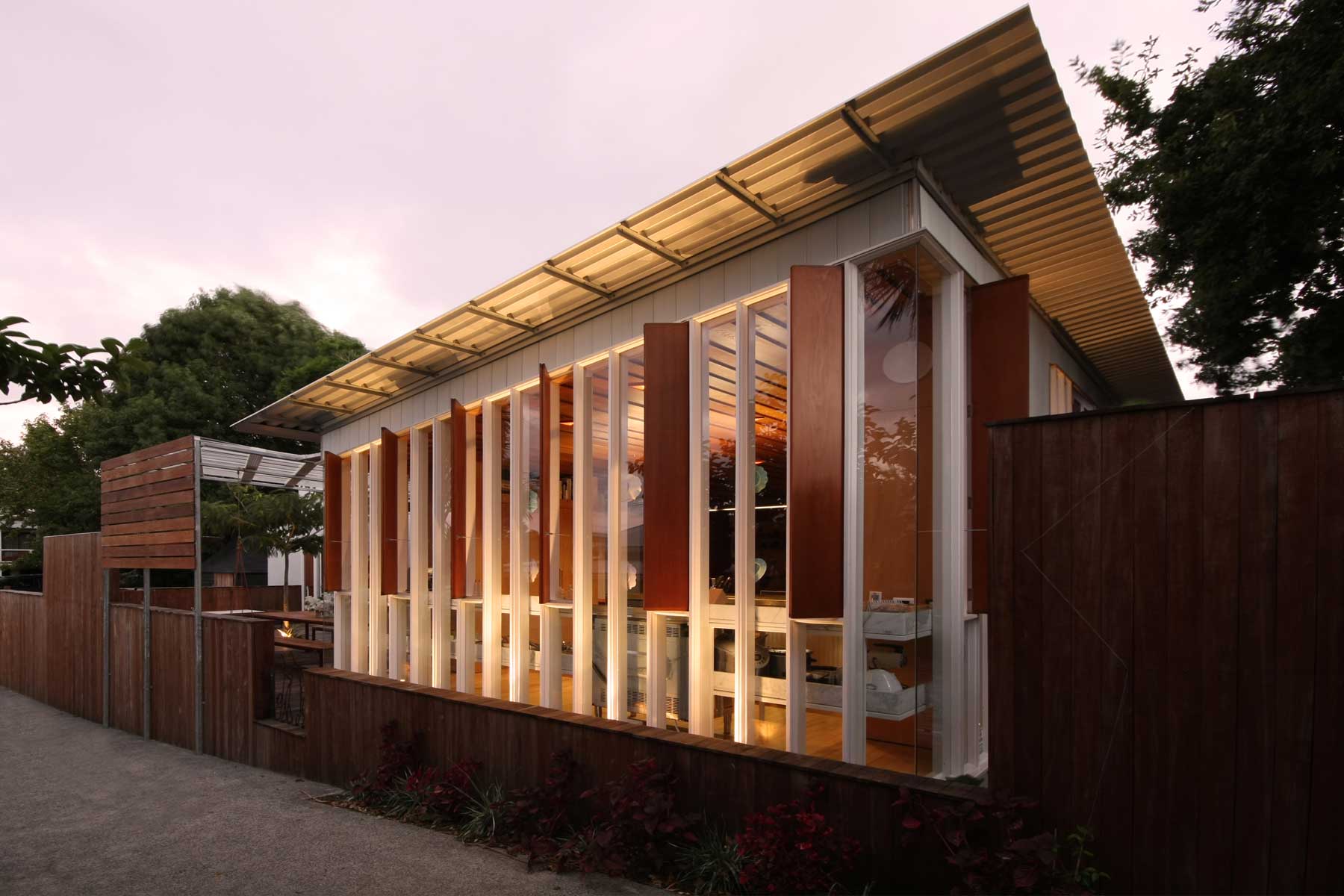 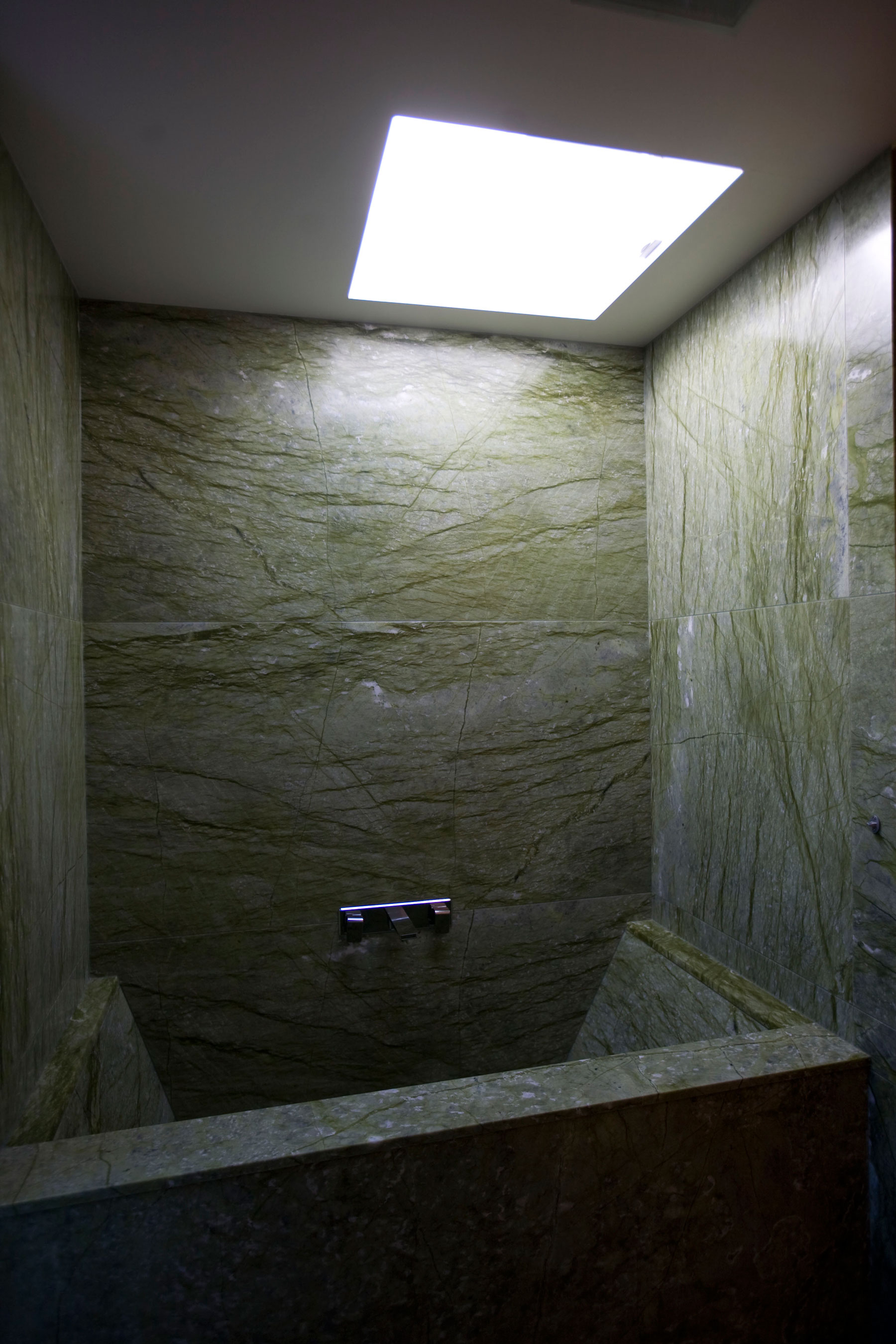 “People would visit and look at us in disgust, as if they were thinking, How could you do this to your kids?” Michael recalls.

Those same friends understand the sacrifice now. Their new home feels spacious (in-spite of its size) and light-filled thanks to a number of clever tricks including the highly reflective island bench and the translucent kitchen cabinets. 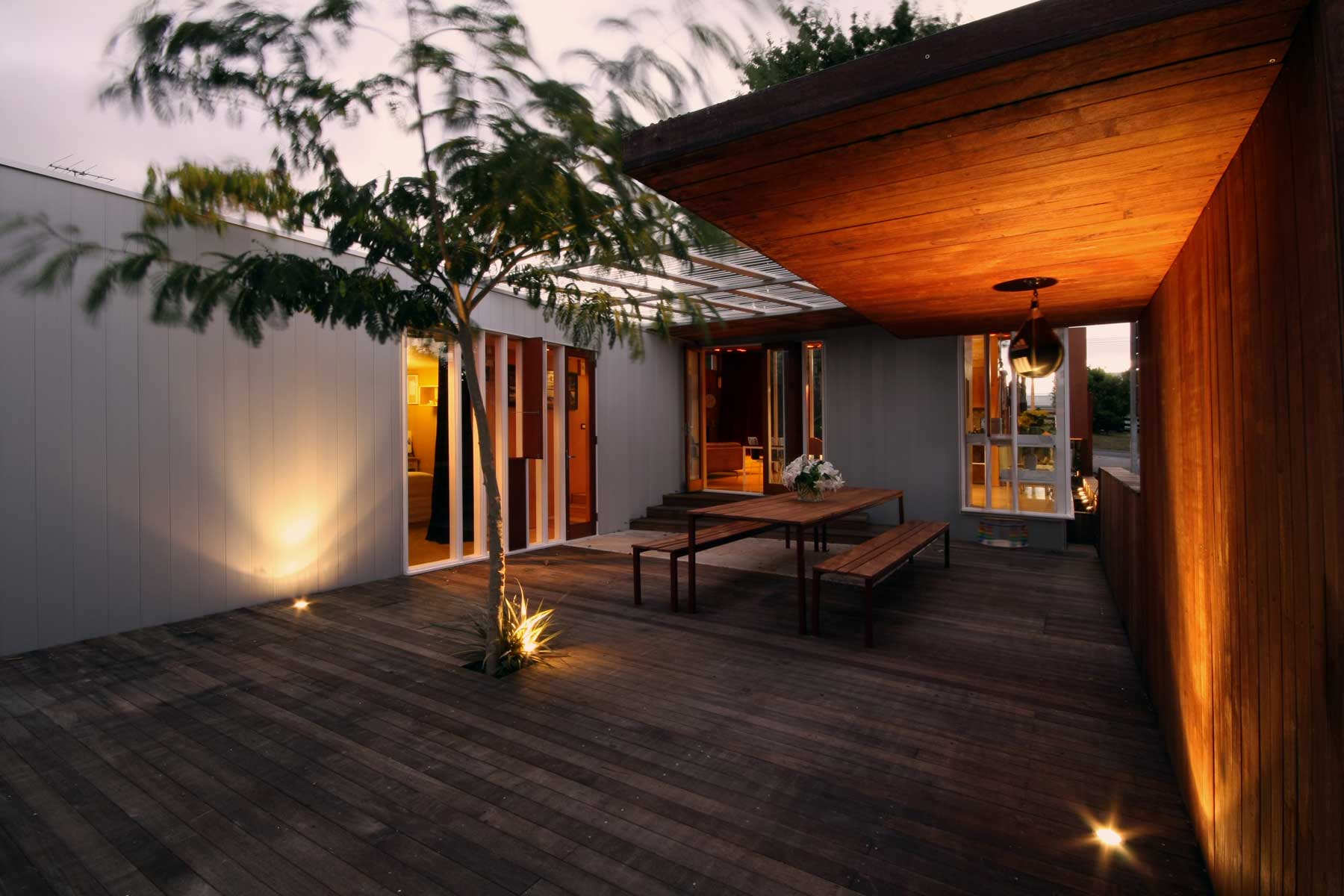 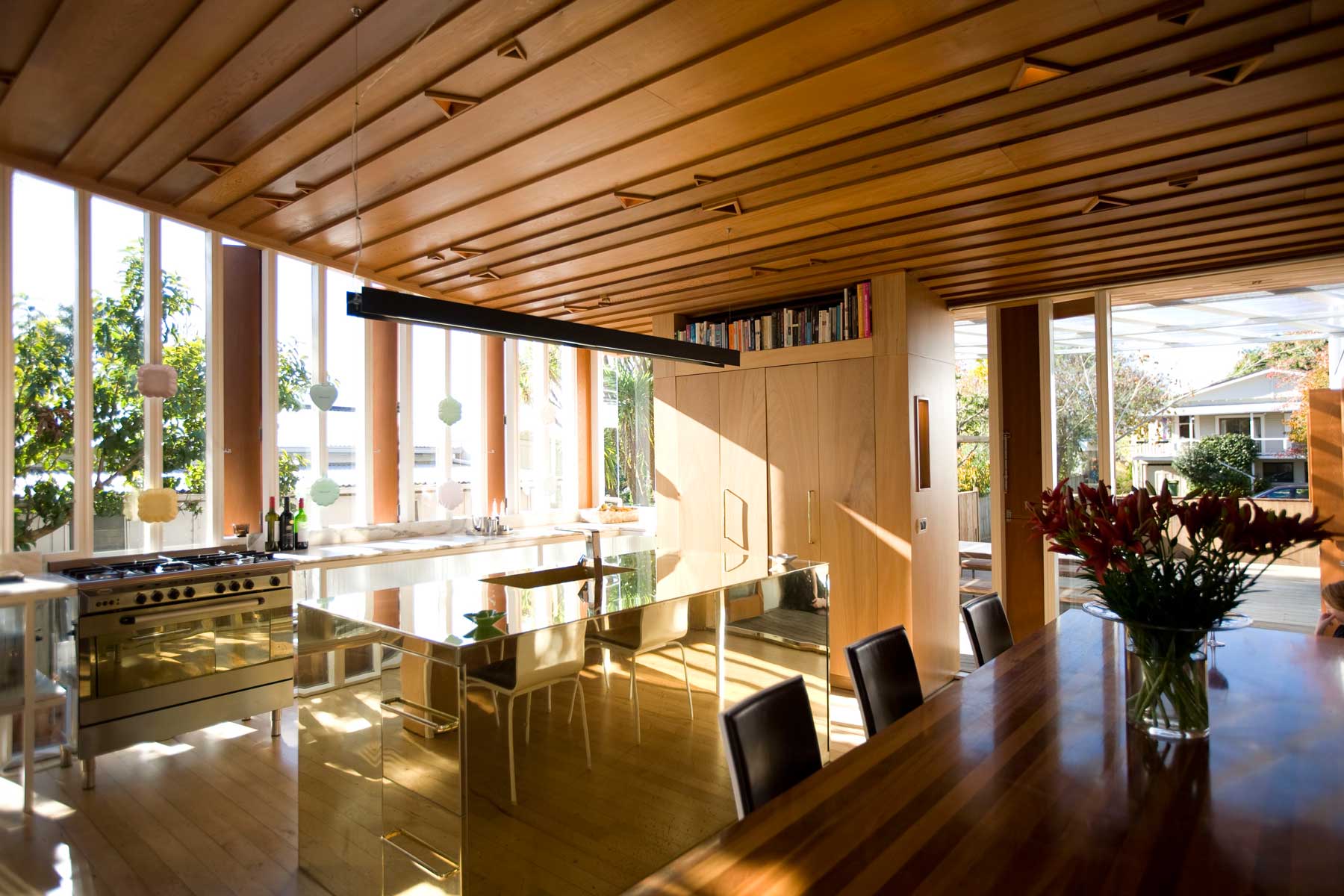 The best part about the house is its pint-sized budget — just $100,000! Okay, that's Kiwi dollars, but even after the conversion that's a bargain in anyone's currency! The house was pulled off on such a tiny budget by Michael's 'free' labour. He balanced a full-time job at his architecture firm with the house project by working from 5am until sundown, splitting himself between the office and the building site. 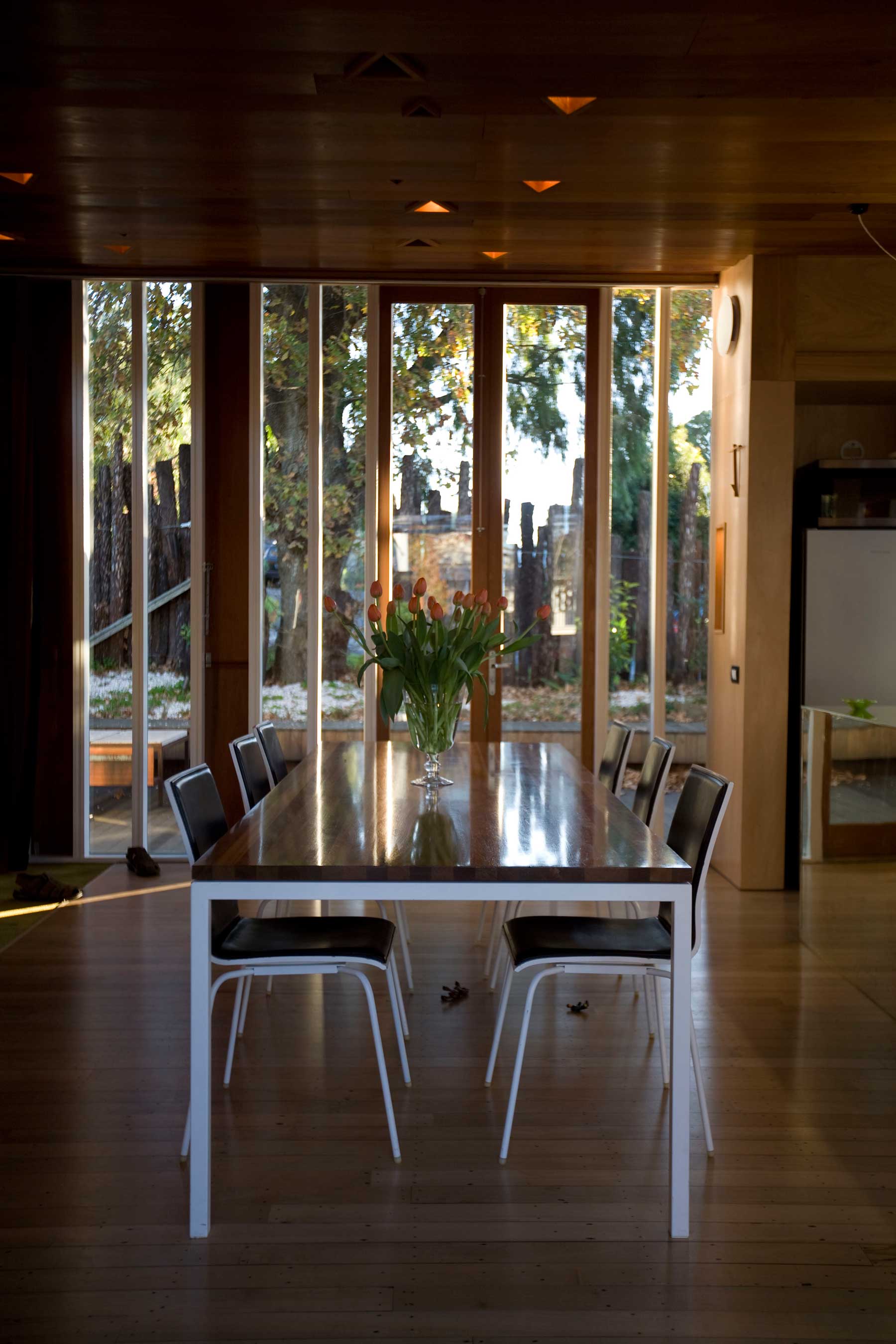 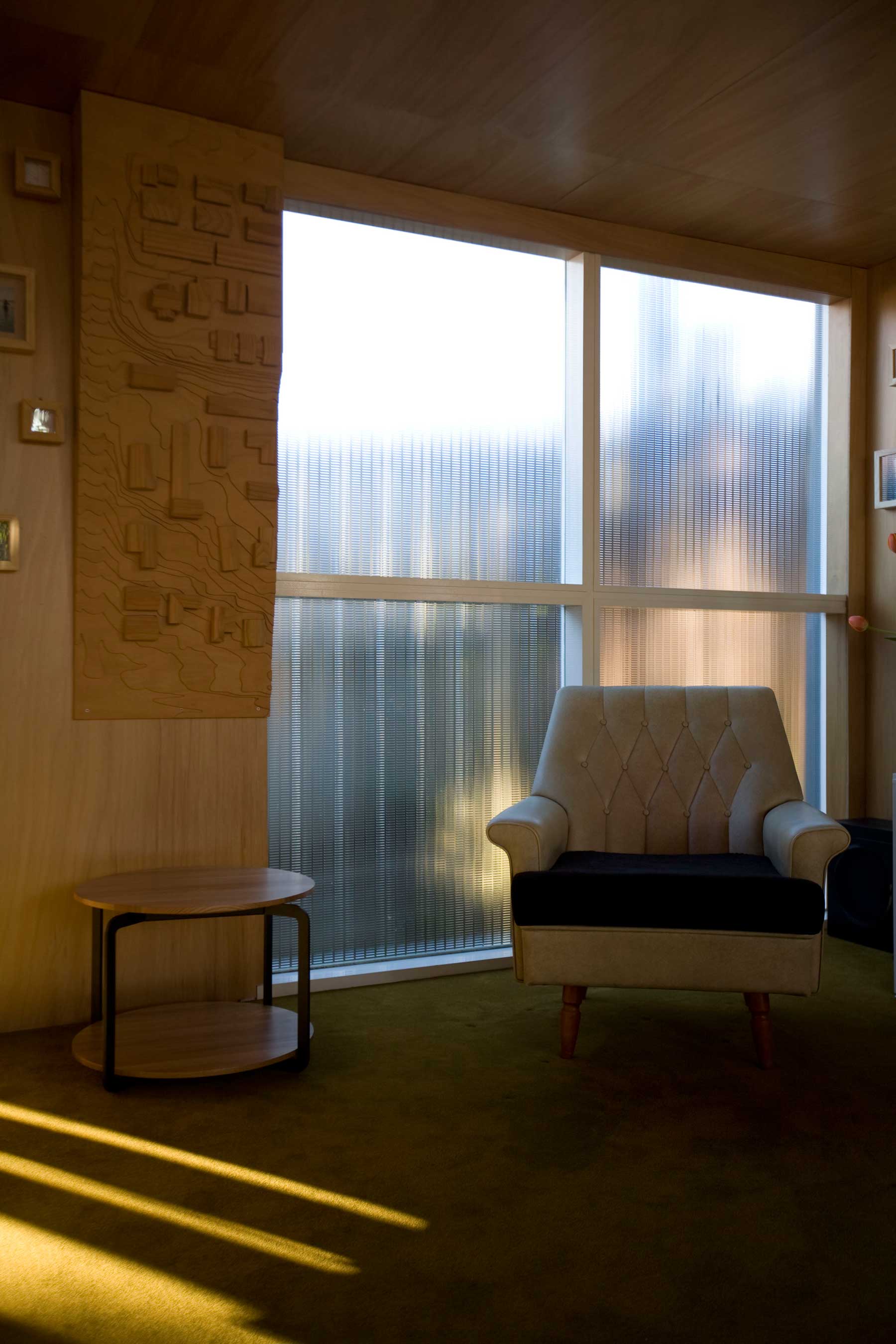 And Michael had never actually built a home! After a couple of death defying run-ins with a nail gun, his neighbours took pity on the poor (stupid?) architect and pitched in to help him finish the home. Many of his neighbours and new friends worked every evening on the project. So it's fair to say the O'Sullivan Family Home is a neighbourhood project of love. 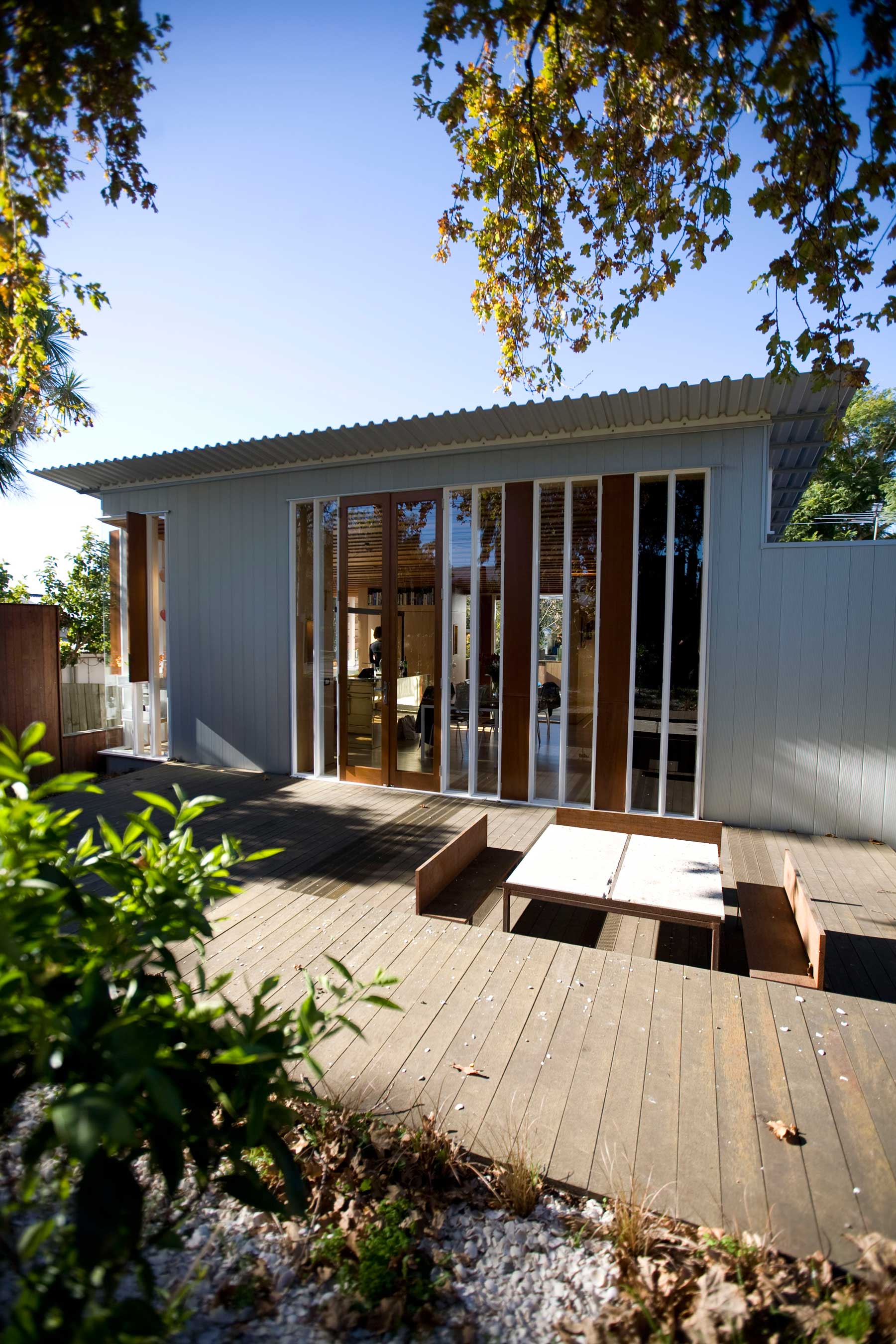 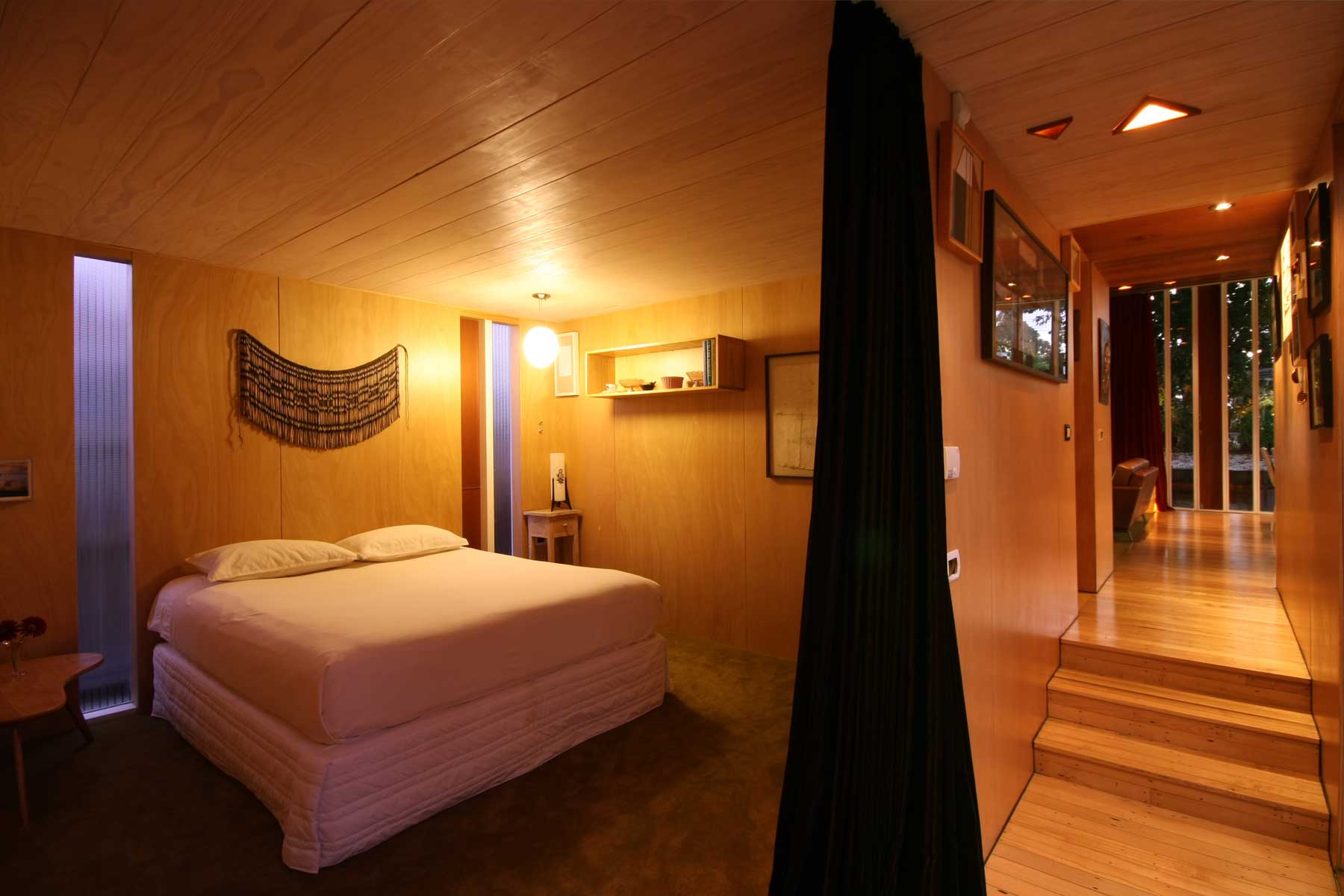 O’Sullivan developed his design while closely observing the way the sun played across the site in different seasons. He began by building a series of cardboard models, eventually deciding to locate the house close to its southern boundary with its living areas facing north and west (which, in the southern hemisphere, is the correct orientation for optimum solar gain). 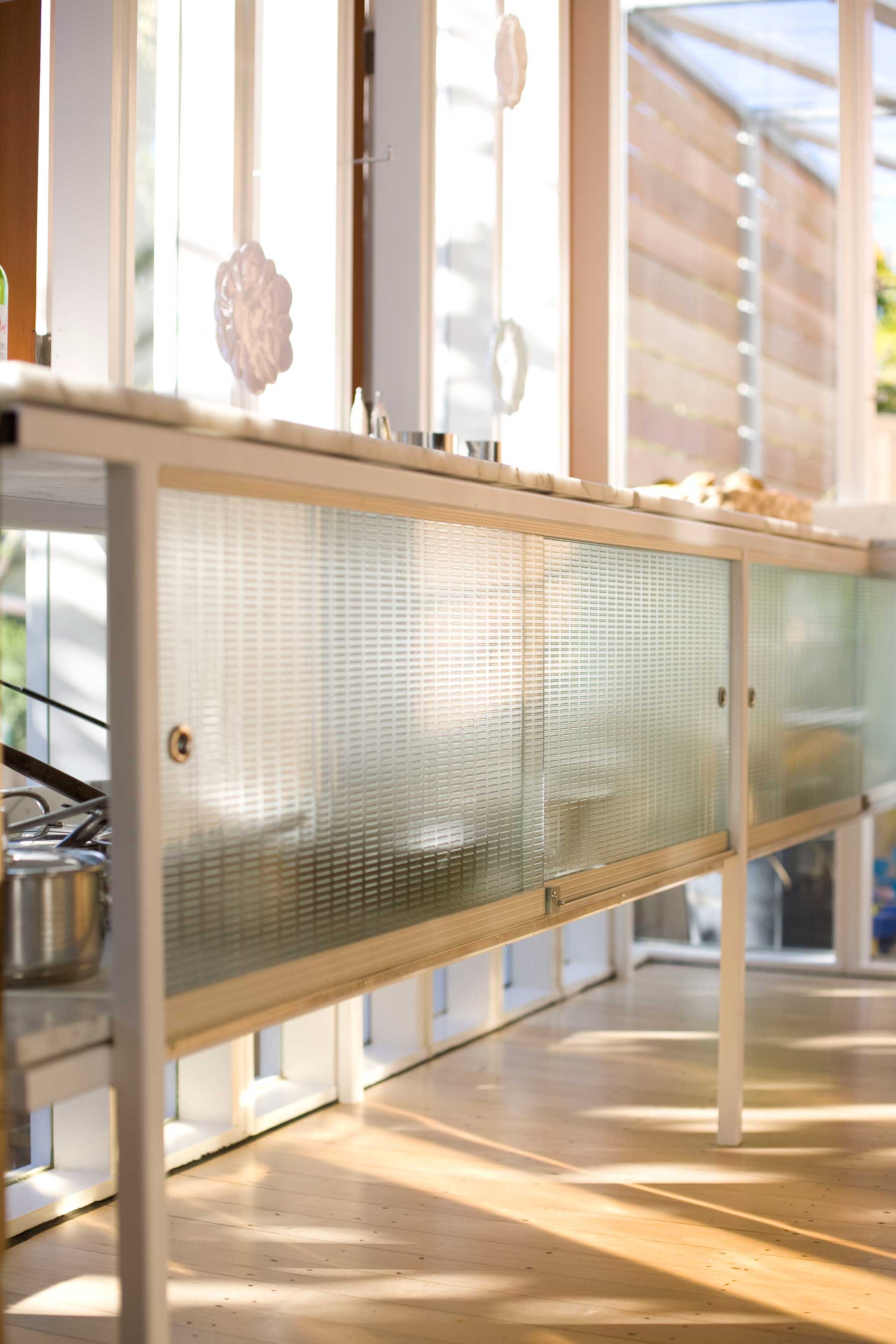 The home’s living pavilion is nearest the street, its mono-pitch roof angling upward to pull late-afternoon sun through tall, slender windows. On the west, it opens to a deck shaded by the oak, while on the east, a larger deck features an outdoor dining area and a lockable gate to prevent the kids straying onto the driveway. Auckland’s temperate climate means both these outdoor spaces are usable all year. The laundry, bedrooms, and bathroom are arranged in linear fashion off a corridor along the back of the eastern deck. 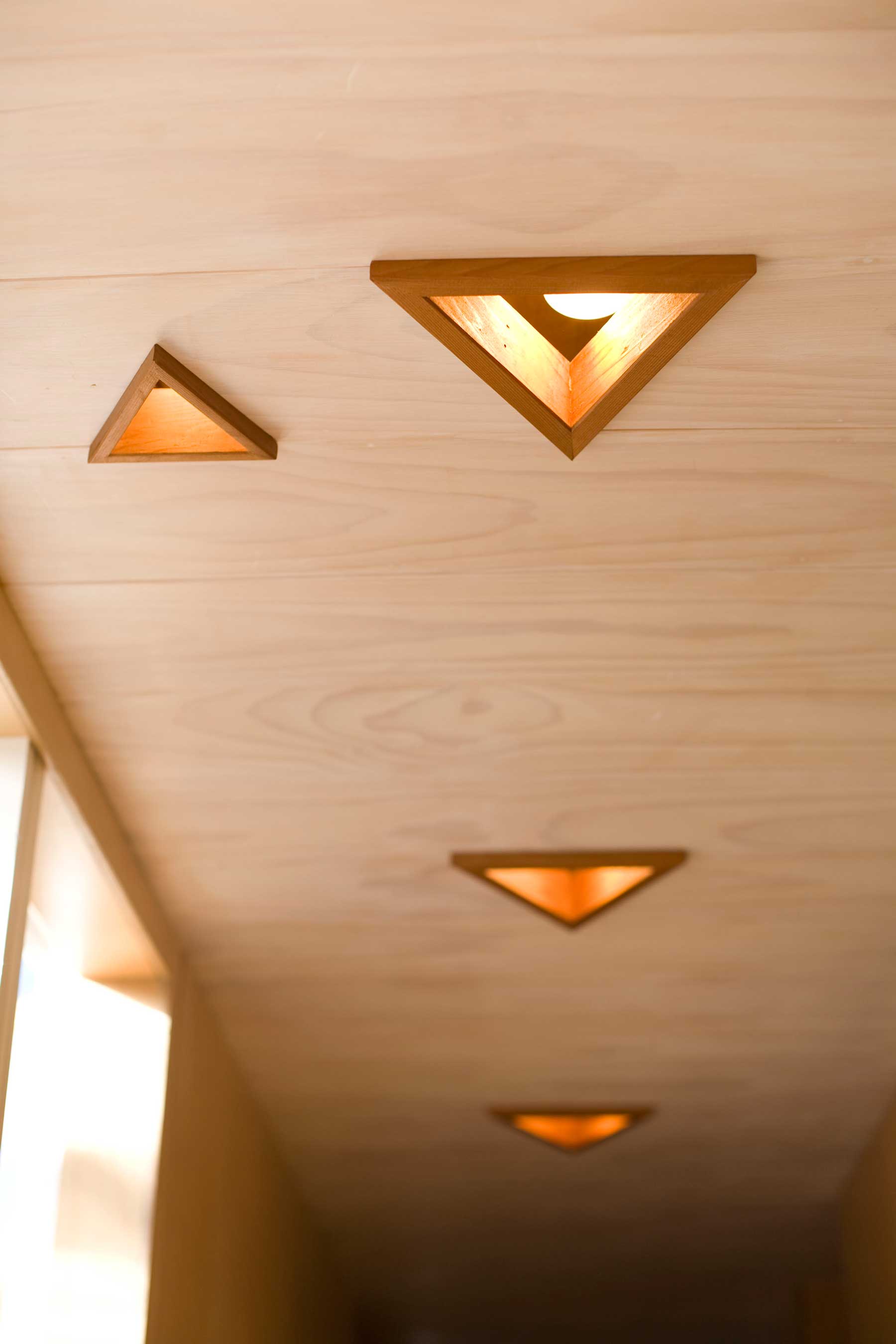 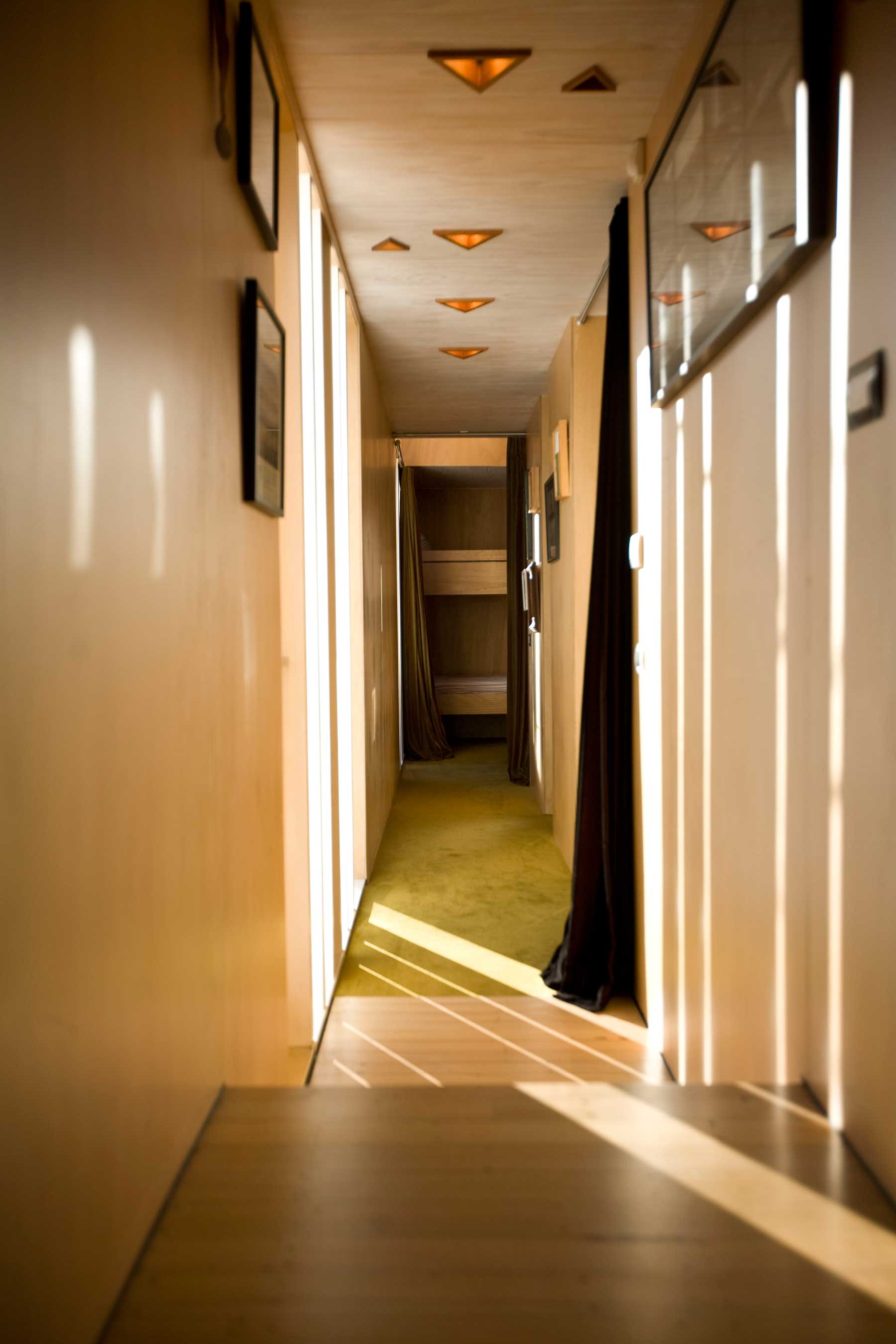 Despite Michael's inexperience, you can see the hours of work that has gone into designing and crafting this home. Take one look at the living area’s intricate cedar weatherboard ceiling, which has triangular holes for recessed low-energy lightbulbs as just an example. 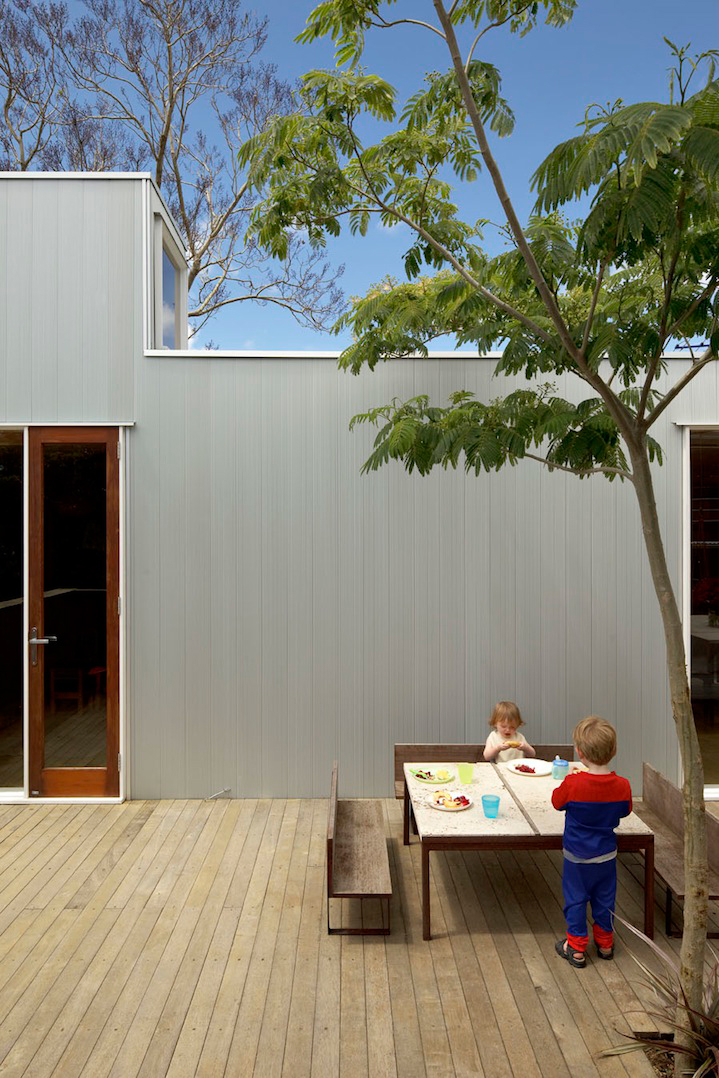 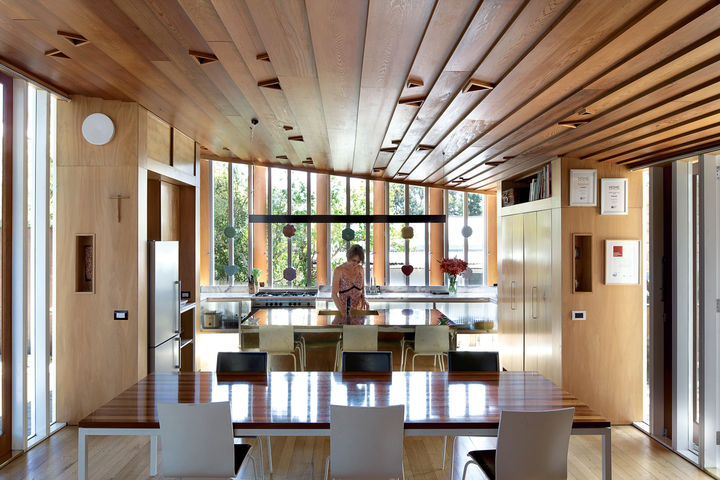 These labor-intensive touches mean the house packs a much bigger punch than its budget would otherwise have allowed. It also meant O’Sullivan and Schollum had enough cash for strategic splurges on materials that further enliven the home. In the kitchen, O’Sullivan created an island with ethereal brass cladding. The bathroom is lined not in the plywood that covers the rest of the house but in vivid green marble. 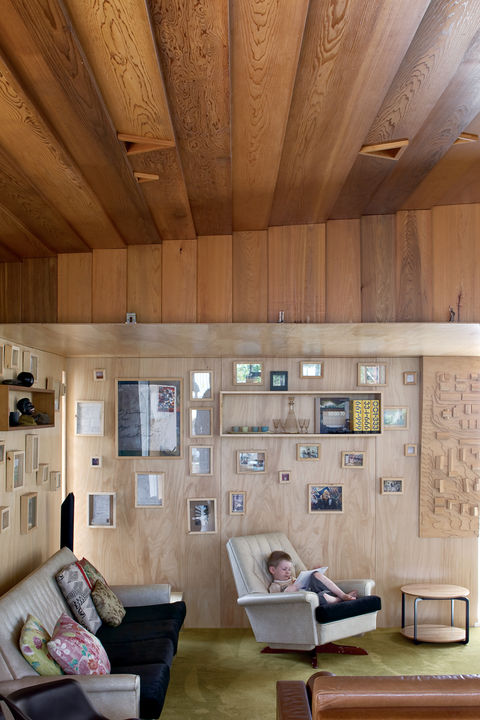 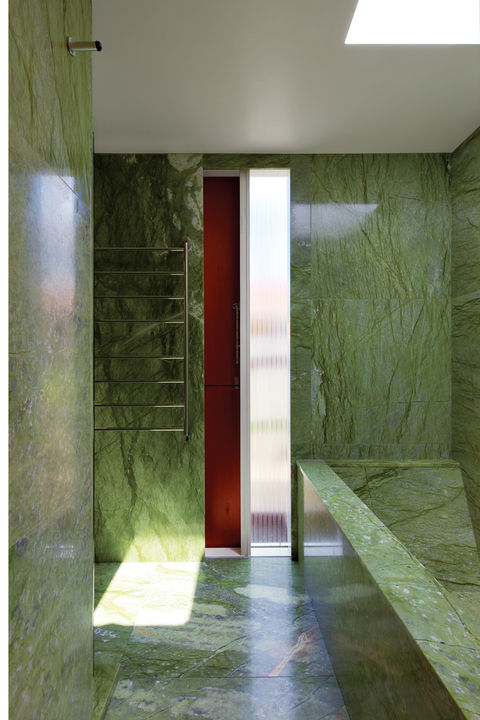 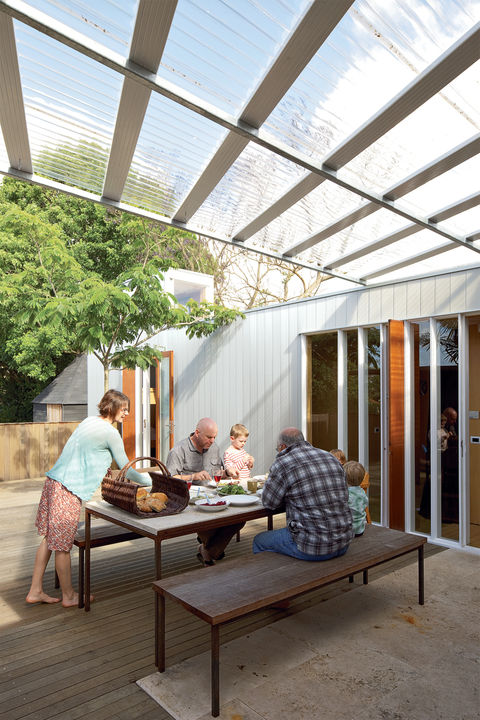 The end result is a place that transcends its bare-bones budget, making it hard to imagine a home more perfect for this site and this family. “Maybe because we had put so much into it, it instantly felt like home. It felt sensational as soon as we moved in. I still come home early so I can watch the sun move through the space.”