A Home With a Sentimental History is Sensitively Renovated

Our homes are imbued with a story. If you're a new owner of an older home, you might not be aware of the whole story. But it's there. That dent in a wall where a little boy whomped a stick at his sister and (thankfully) missed, hitting the wall instead. Or the little burn marks on a carpet, where a grandmother dropped some still too hot coals as she cleaned the fireplace. Or the height marks, charting a family's growth, drawn in pencil on a door frame, now hidden under several layers of paint. Sometimes though, a family have lived in a home for so long, they remember this story; it's theirs. How do you renovate a home where the history is so close to the surface, so fresh in the mind? 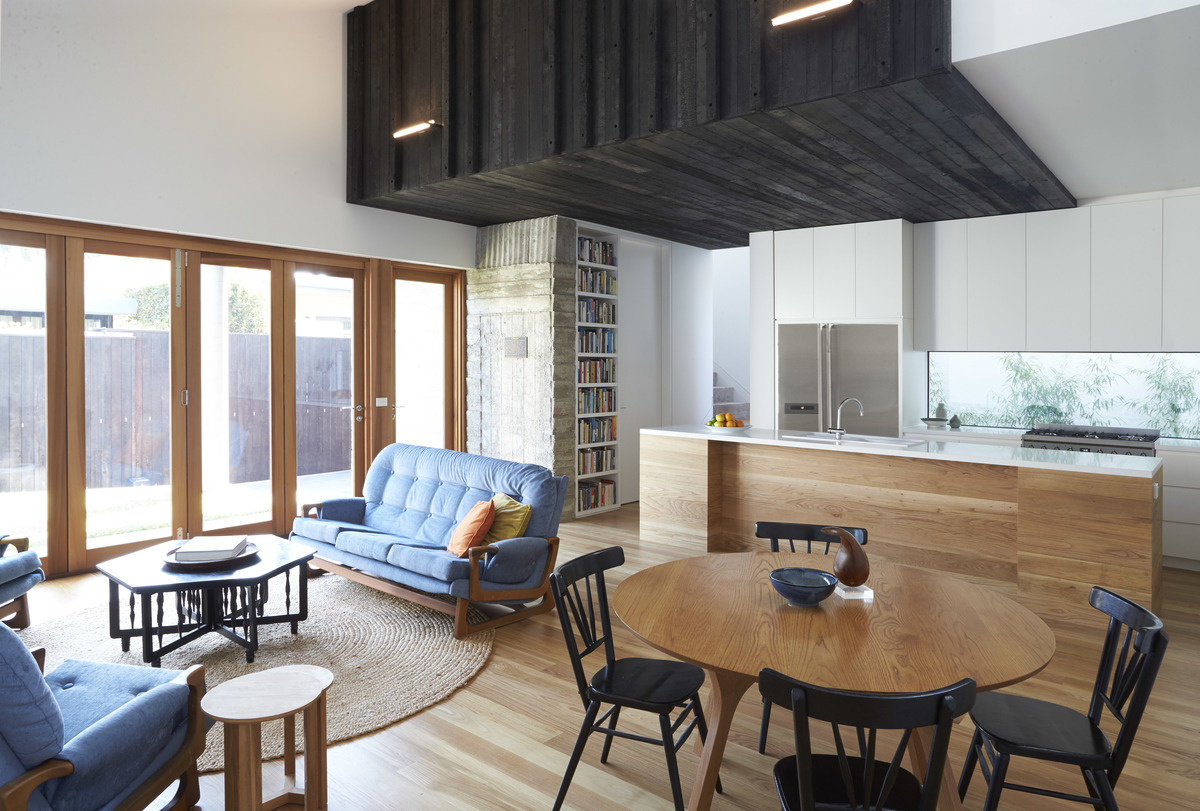 Albert Park House is a home previously owned by Kasimiersz and Lucia. Kasimiersz outlived two of his children but when his last child took over the home, he wanted to renovate while still respecting the history he and his family had made there. "The back of the dwelling was a hotch-potch of rooms that backed onto a bluestone cobble laneway", says architect Barnaby Chiverton. 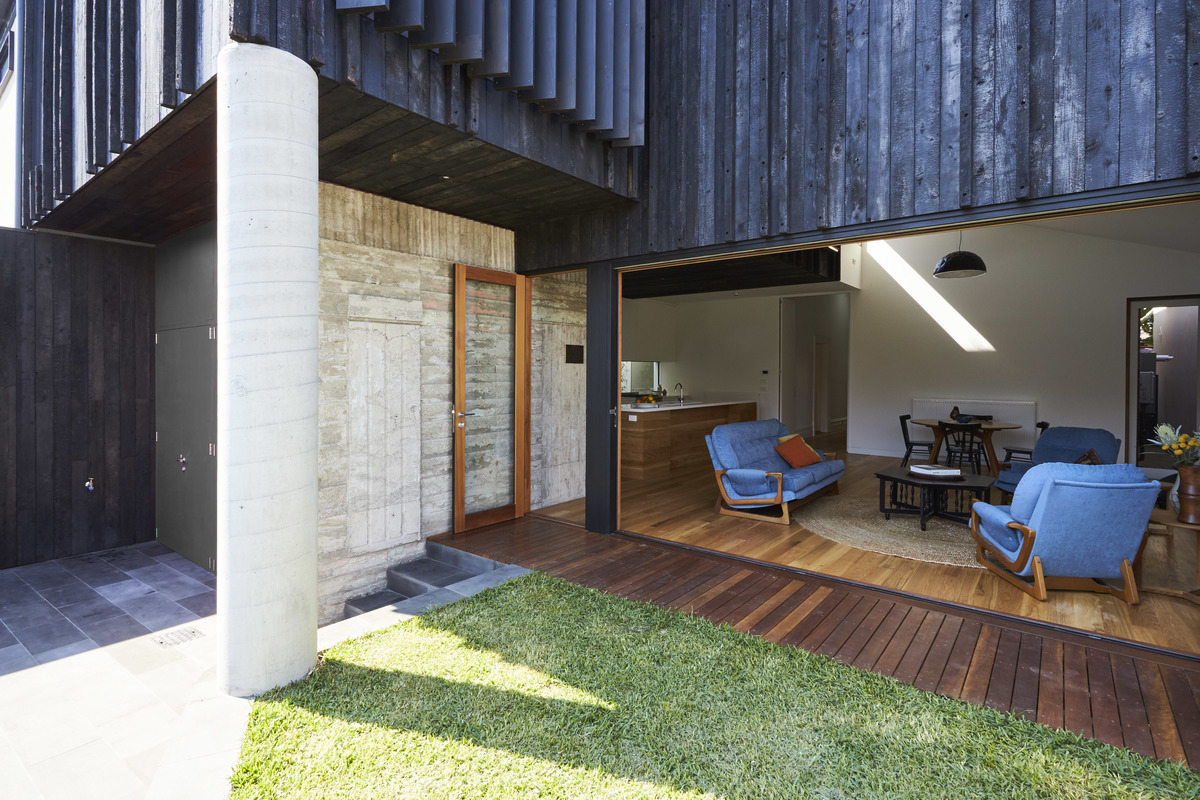 Chiverton Architects was asked to restore the front of the house back to its Victorian grandeur, while rebuilding the kitchen, living and dining rooms out the back. The client also asked for a new master bedroom with walk-in robe and ensuite bathroom and a space for a car off the rear bluestone lane. "Our challenge", explains Barnaby, "was to fit all this accommodation into the limited area whilst minimising impacts to neighbours. To do this, we twisted the upper floor by 90-degrees over the lower floor and cantilevered it over the car-parking space." This approach kept the height of the addition to the north-west boundary, still allowing light into the yard of the neighbour, and also creating a sunny outdoor space for the owner. 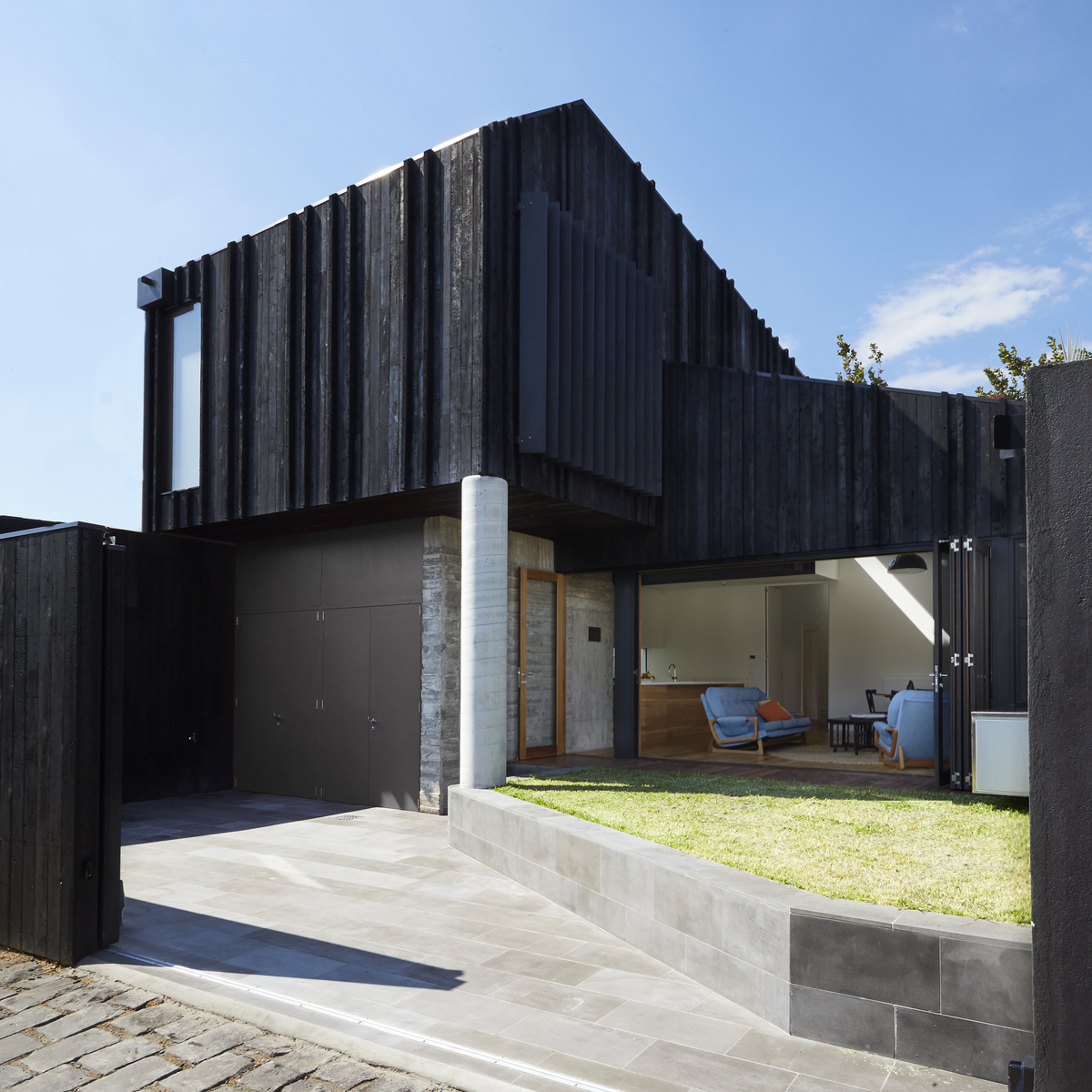 Inspired by the history of the home and the "ramshackle nature of rear lanes with their mix of materials and textures", the architect designed the addition to have a "shed-like quality that you find in rear lanes". This led to the use of charred cedar as a cladding. Manufactured off-site by the builder, it is an old Japanese technique called Shou Sugi Ban. The technique is used to make timber more fire and bug proof. Apart from creating a deep black, textural finish, it can also extend the life of the timber and minimises maintenance. 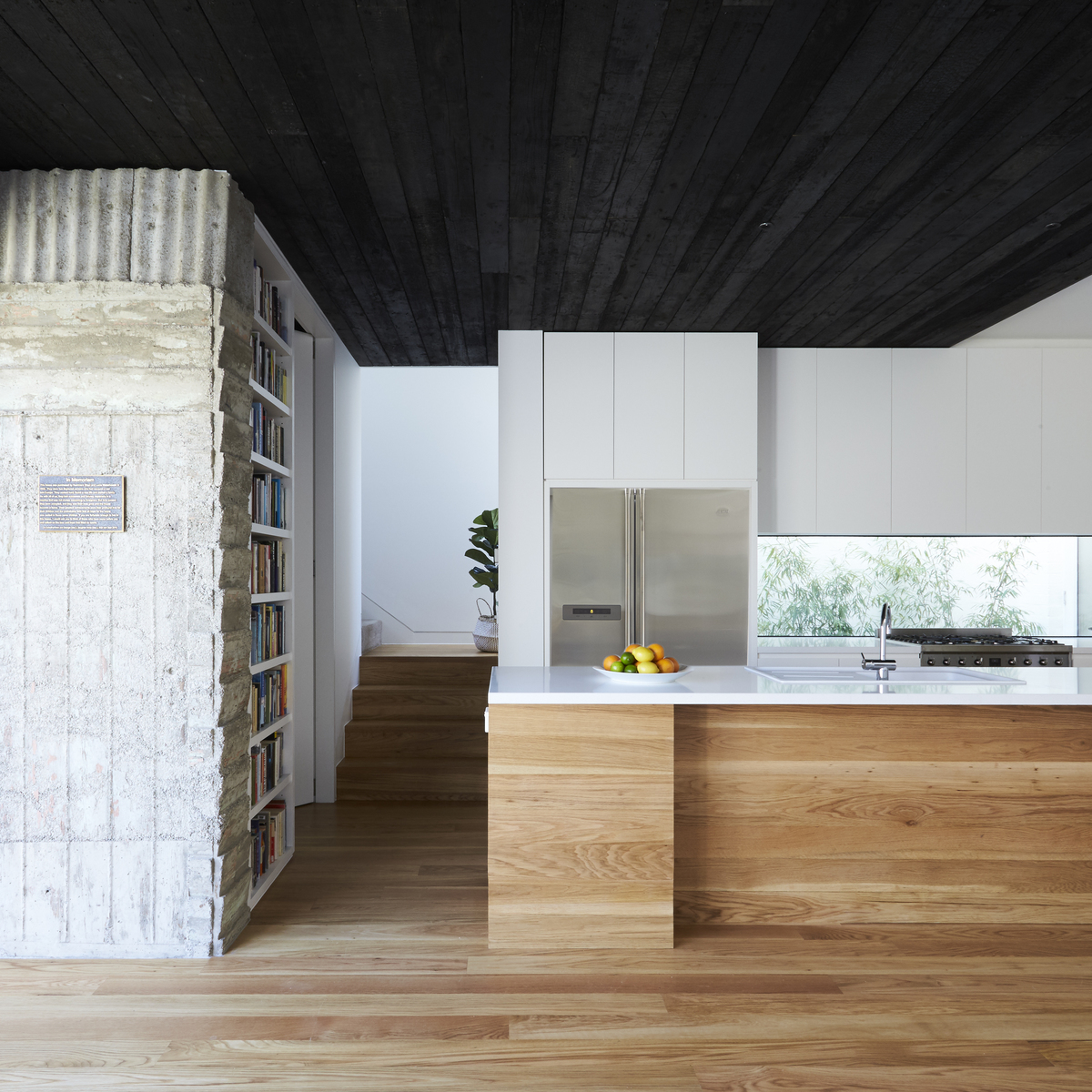 Downstairs the walls of an existing old shed were used as concrete shuttering to create a wall that transitions from inside to outside. "The in-situ wall now gives a reversed impression of that shed and acts as a reminder of what was once there", Barnaby says.

'This house was purchased by Kasimiersz and Lucia in 1955', reads a plaque on that wall. 'They were two displaced persons who had escaped a war-torn Europe. They worked hard, found a new life and started a family. As with all of us they had successes and failures, especially in a country that was not always welcoming to foreigners. But time passed, they were accepted and they saw their lives grow and the house became a home. Their greatest achievements were their profound love for their children and the unshakable faith that all hope for the future was vested in these same children. If you are fortunate enough to live in this house I would ask that you think of those who have come before you and reflect on the love and hope that filled its rooms' 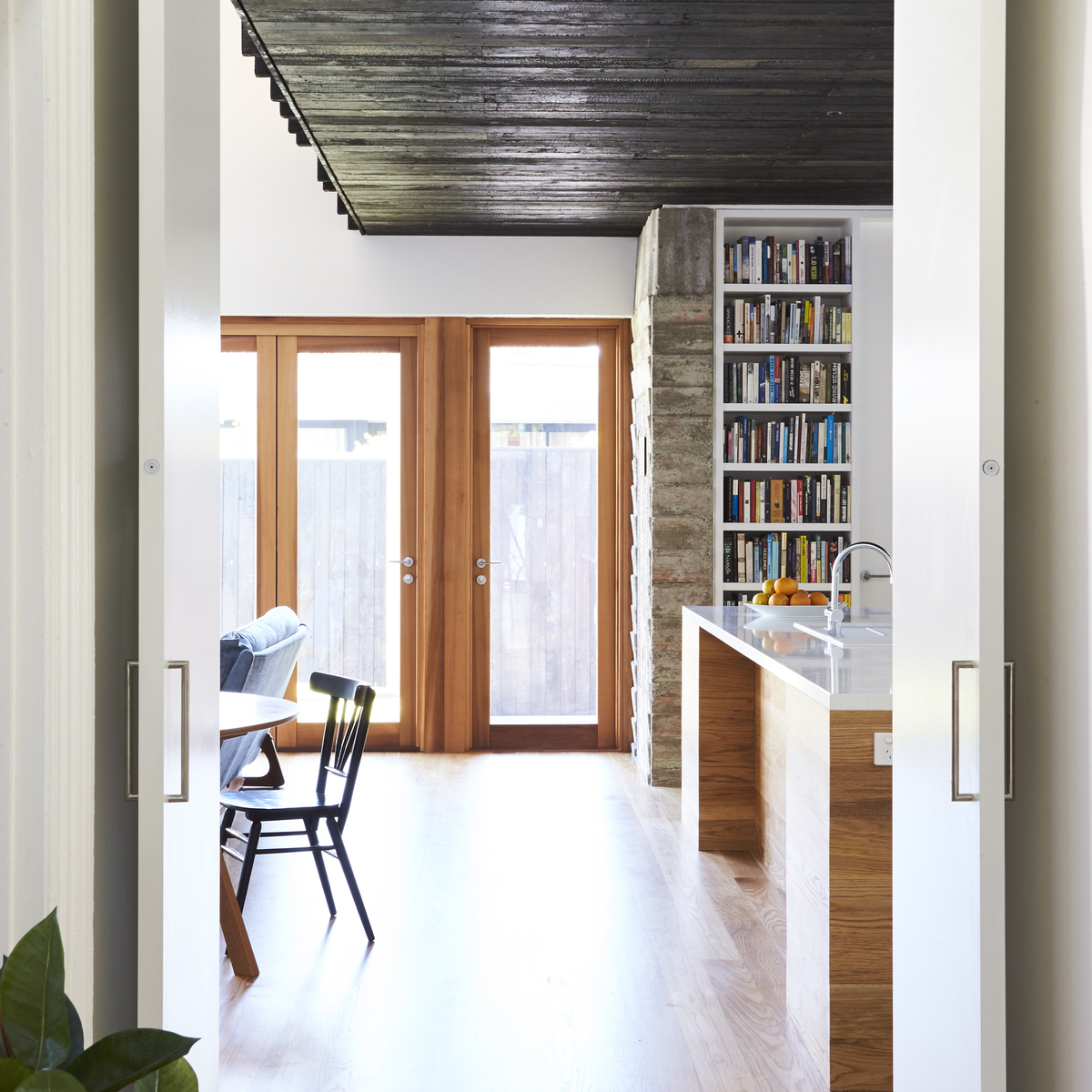 Part of the beauty of this project is the way the history of the home - the client's history - has been woven into the fabric of the addition. Far from a soulless, blank box, this addition reminds those who live in it of those stories that have shaped the house. The stories which make it a home. 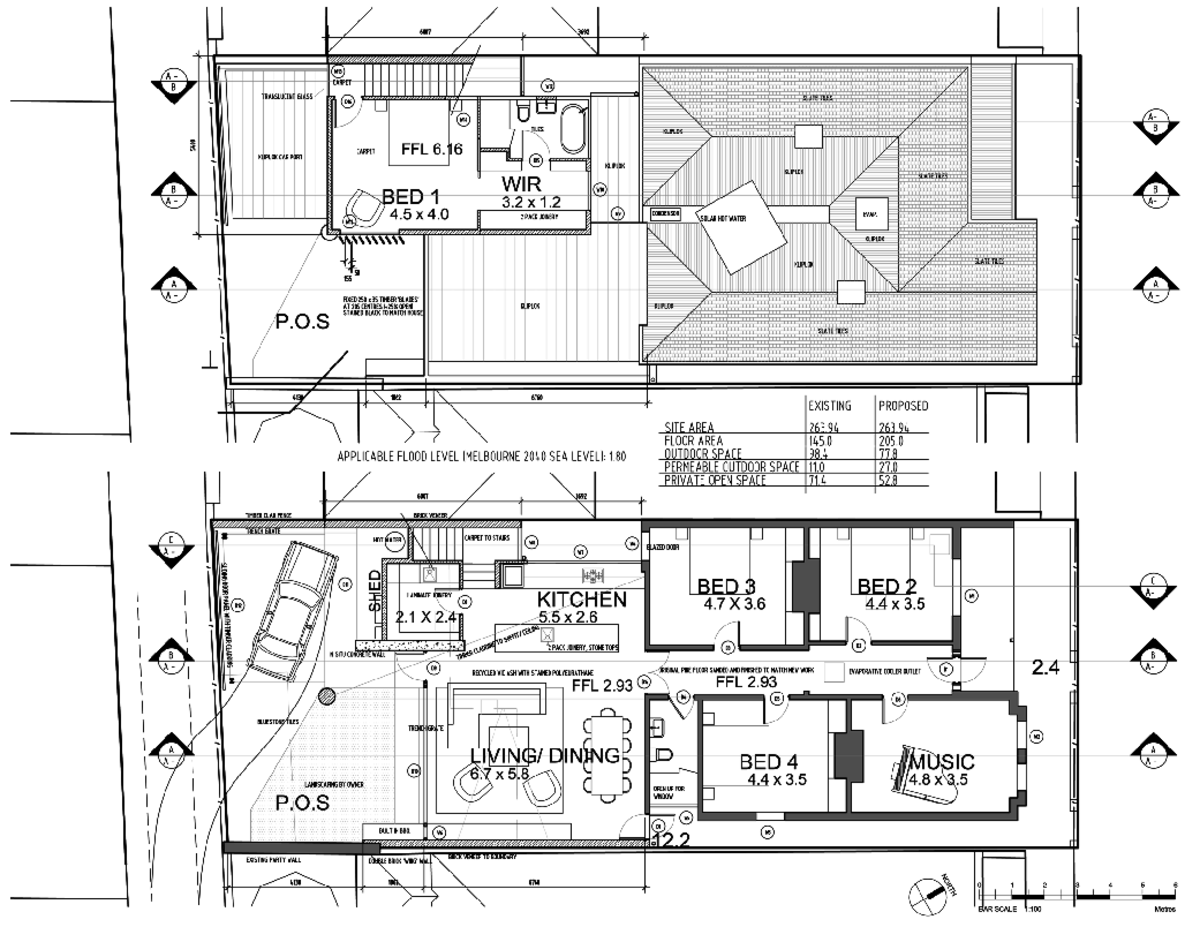 Tell us what you love about Albert Park House...