Balmoral House: What Do You Do When You Have Five Overlooking Neighbours?

Designed by Owen and Vokes

Balmoral House is Owen and Vokes' response to the setting of an existing Queenslander — a site which is heavily overlooked by five neighbouring properties. This constraint led to the construction of a facade that idealises the setting for new rooms accommodating a bathhouse, stair room, guest room, family room and a writer's studio, without peering into the neighbours' backyards… 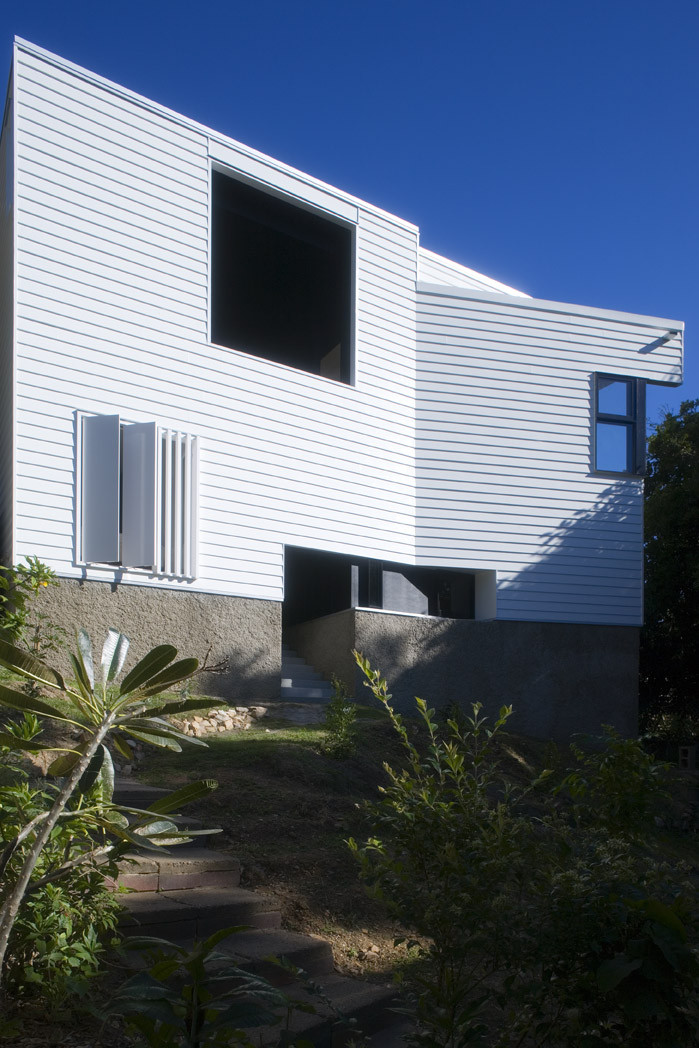 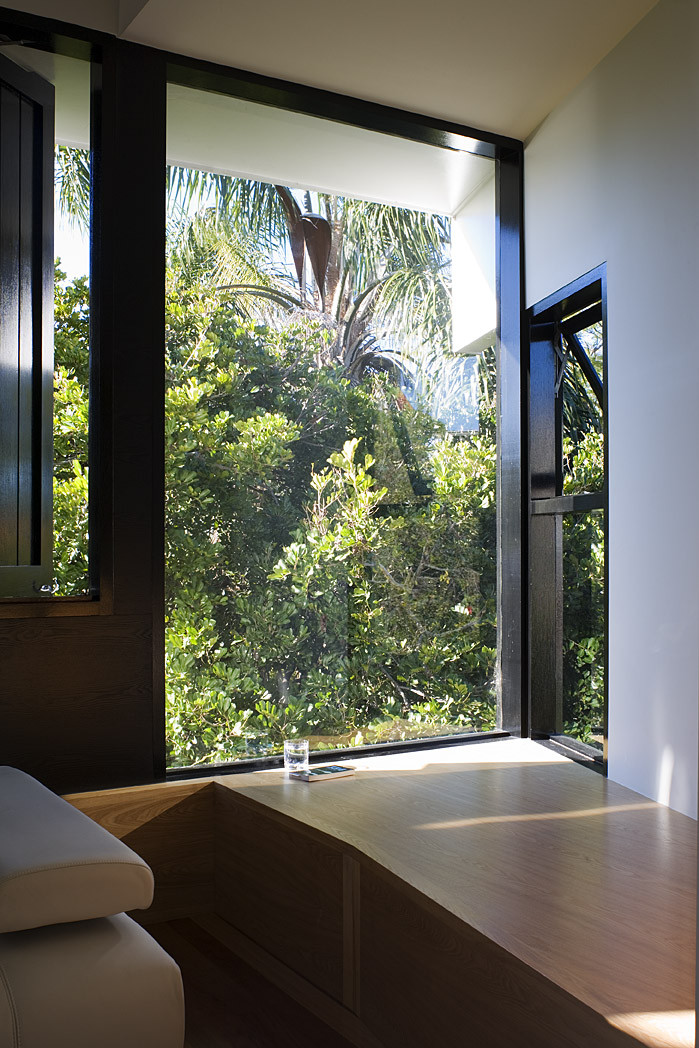 The principal orientation of these rooms is manipulated towards the north and the lush backyard landscapes are framed with carefully positioned windows and orchestrated lines of sight. Views of neighbouring houses are edited from key spaces in the new rooms. 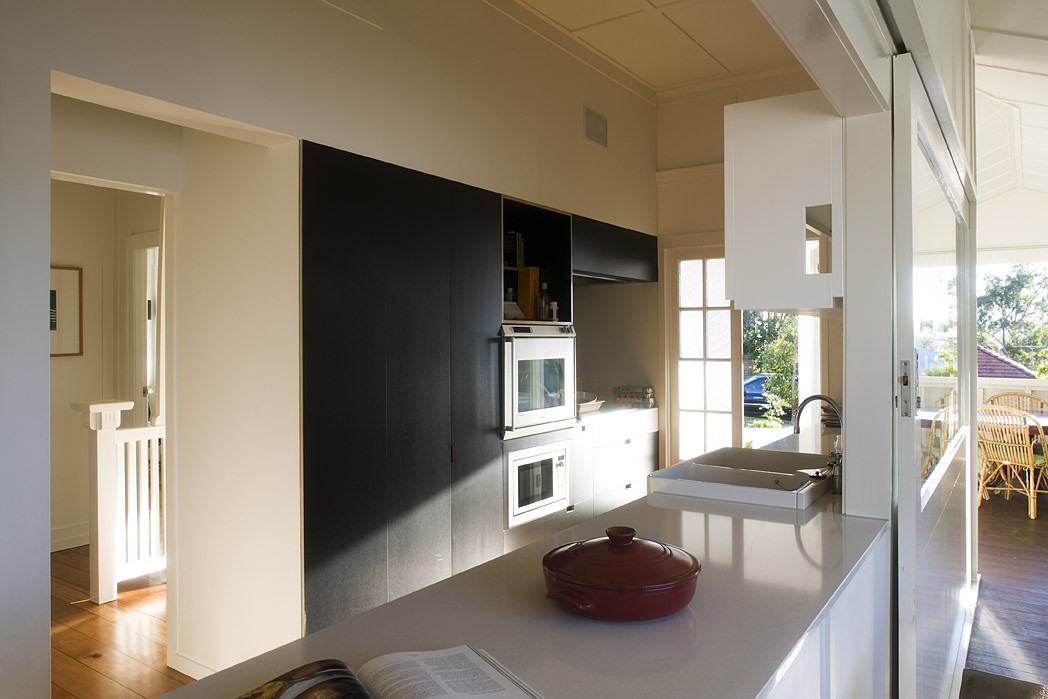 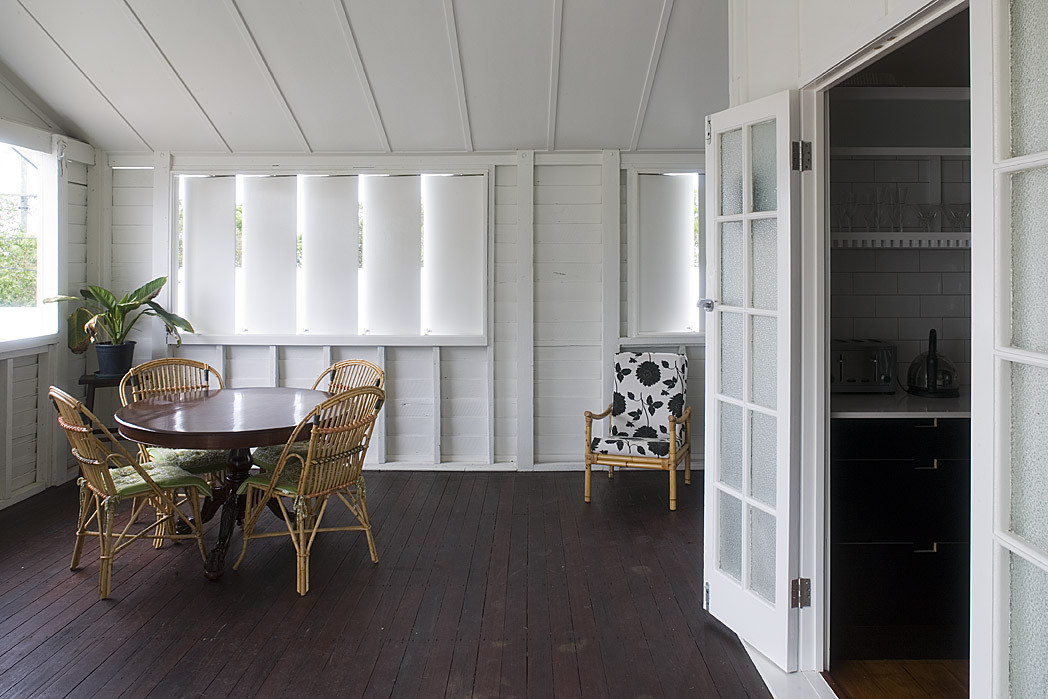 With an ongoing interest in room making, Owen and Vokes questioned how the new facade may conceal or reveal the arrangement of rooms and the building's cross section, and conversely, how the nature of rooms directly behind the facade may inform its elevational composition. They drew on both the formal devices of Palladio and the latent spatial complexity and silent facades of Loos as inspiration. 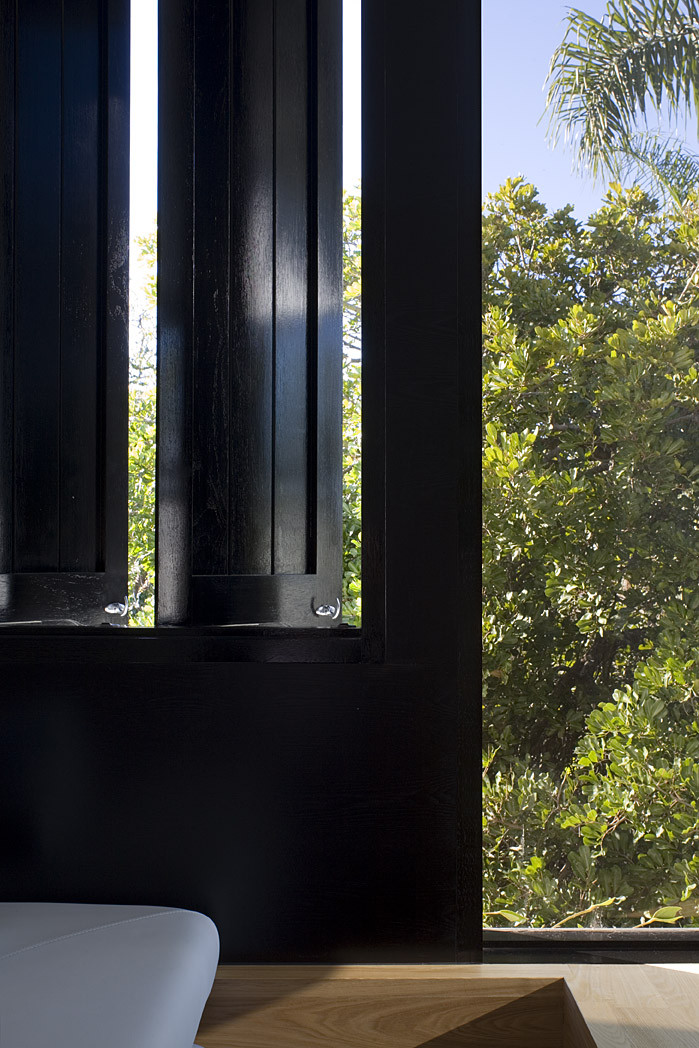 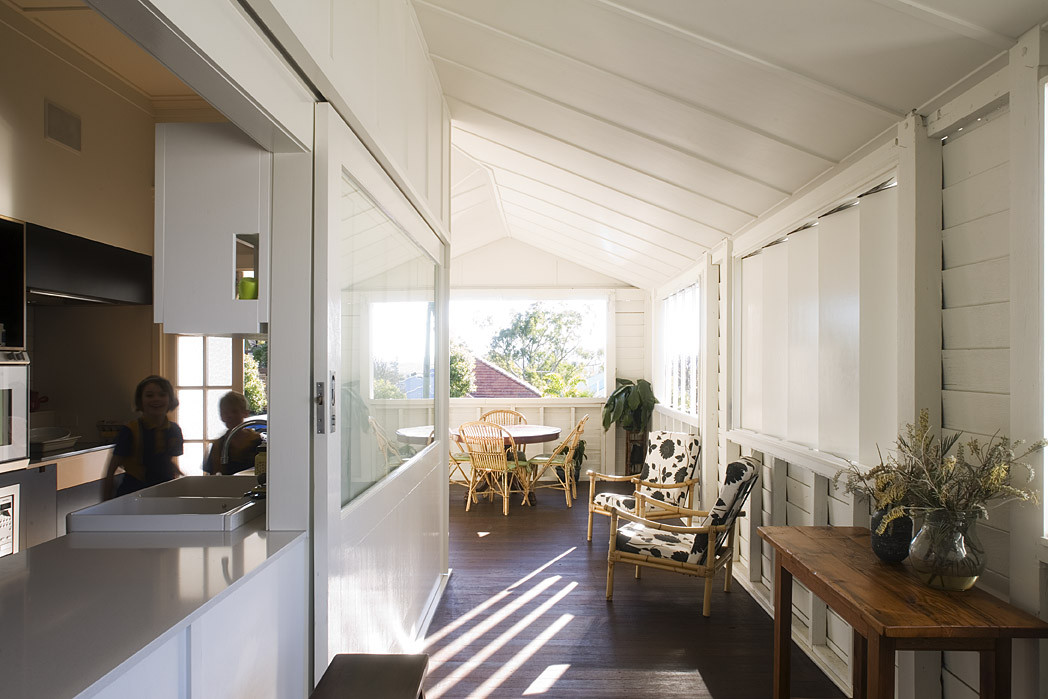 Palladio's elevated Villa Foscari in Malcontenta provided answers to the architects topographically challenged ambition to engage the rear garden and ground plane of the steep terrain, and as such the building re-enacts the promenade sequence from Piano Nobile to garden at Malcontenta. The vertical promenade effectively places the occupant en-route to or from the garden once in the stair room and circulation through the new works is undeniably connected to the garden. 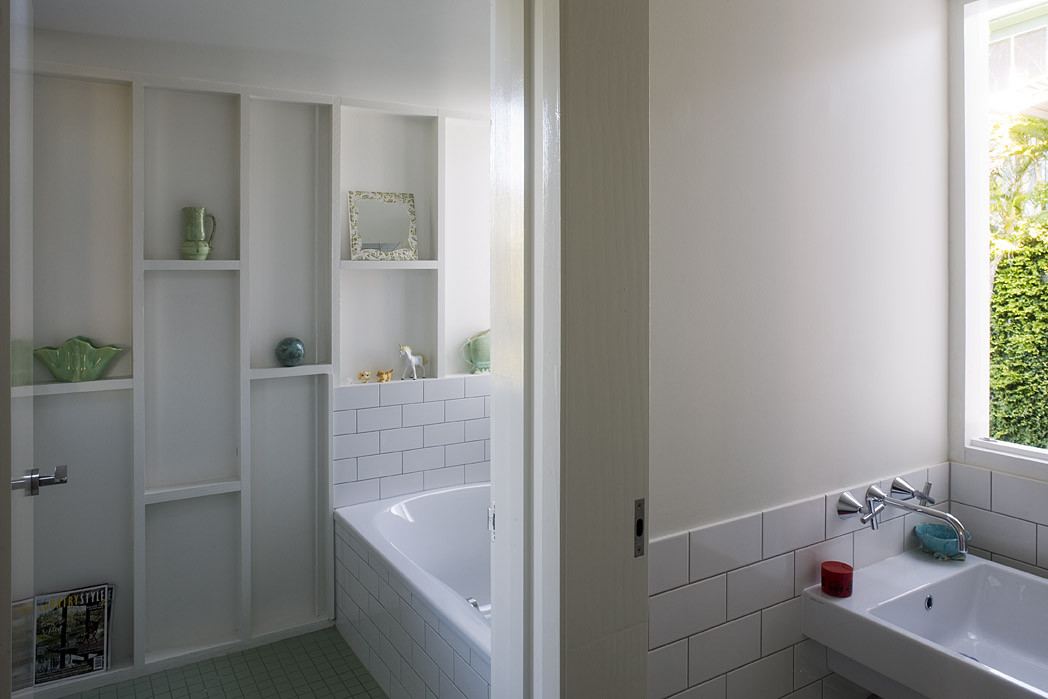 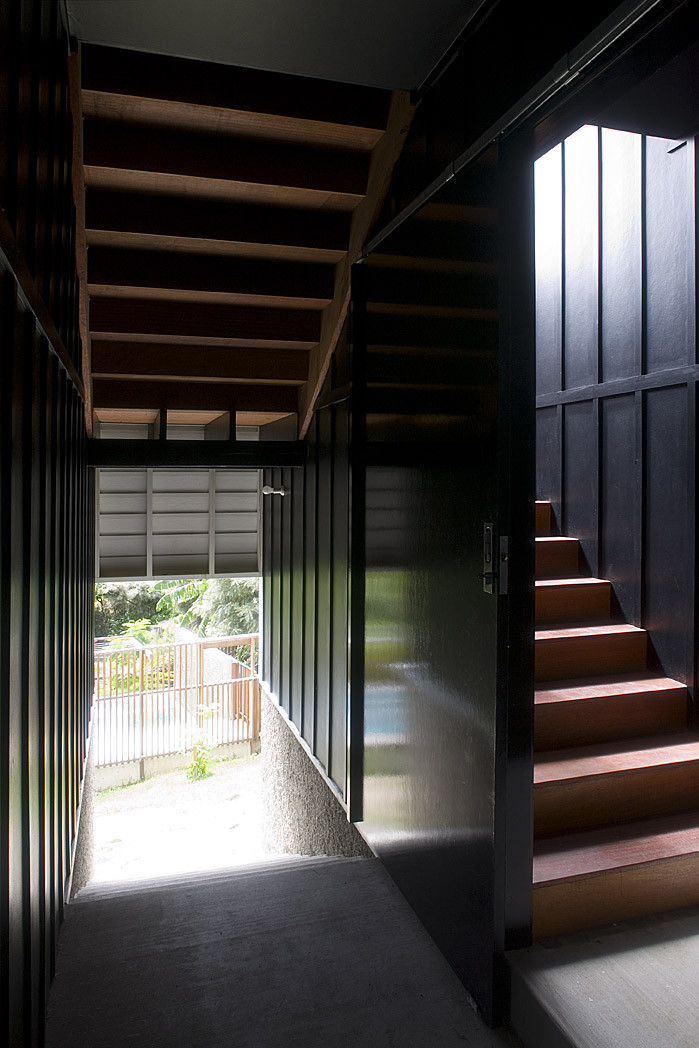 The composition and and placement of windows in the facade suggest possible room planning behind, proving ambiguous and adding to a reticence appropriate in suburbia, where privacy holds currency. 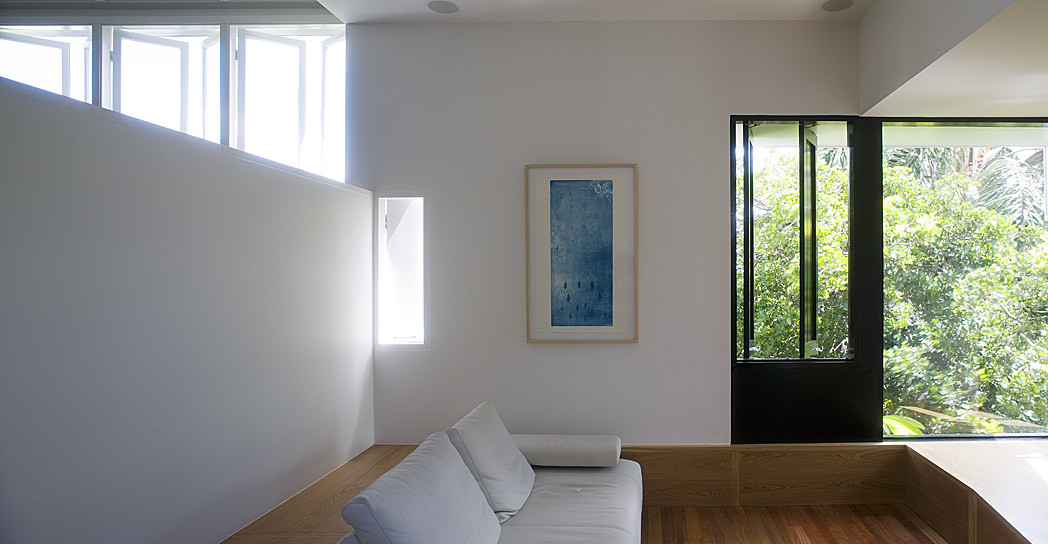 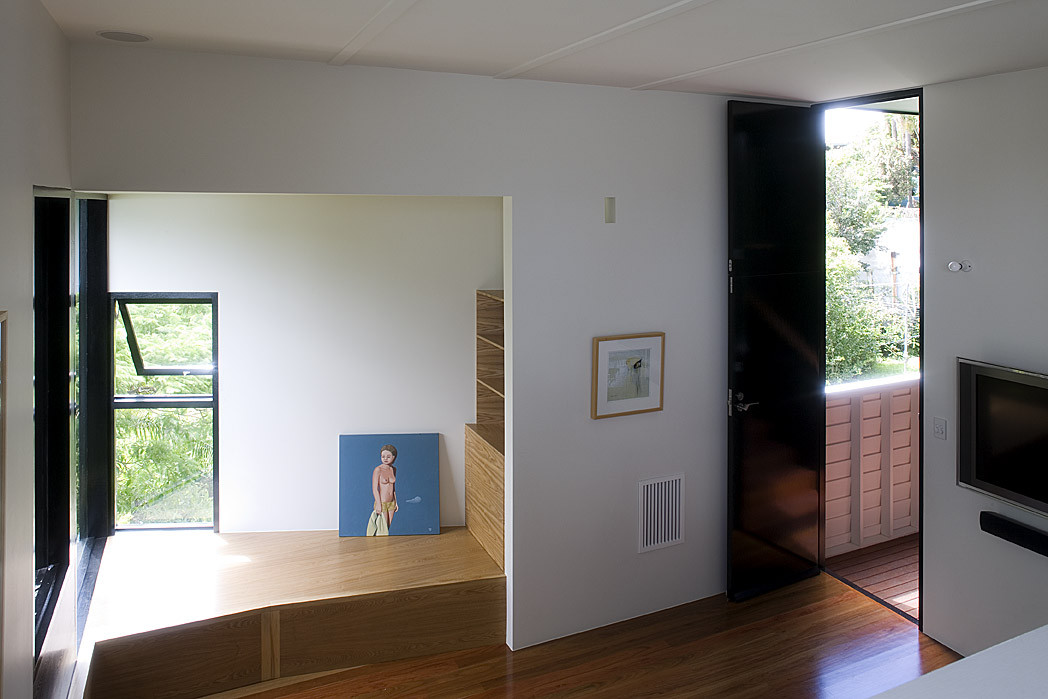 The logic behind the facade provides little explanation of the subtle complexity of the building's cross section and the hierarchy of rooms. For example, the large gaping opening (which could be Palladio's thermal window) suggests a large or public room behind, however one discovers a stair room. 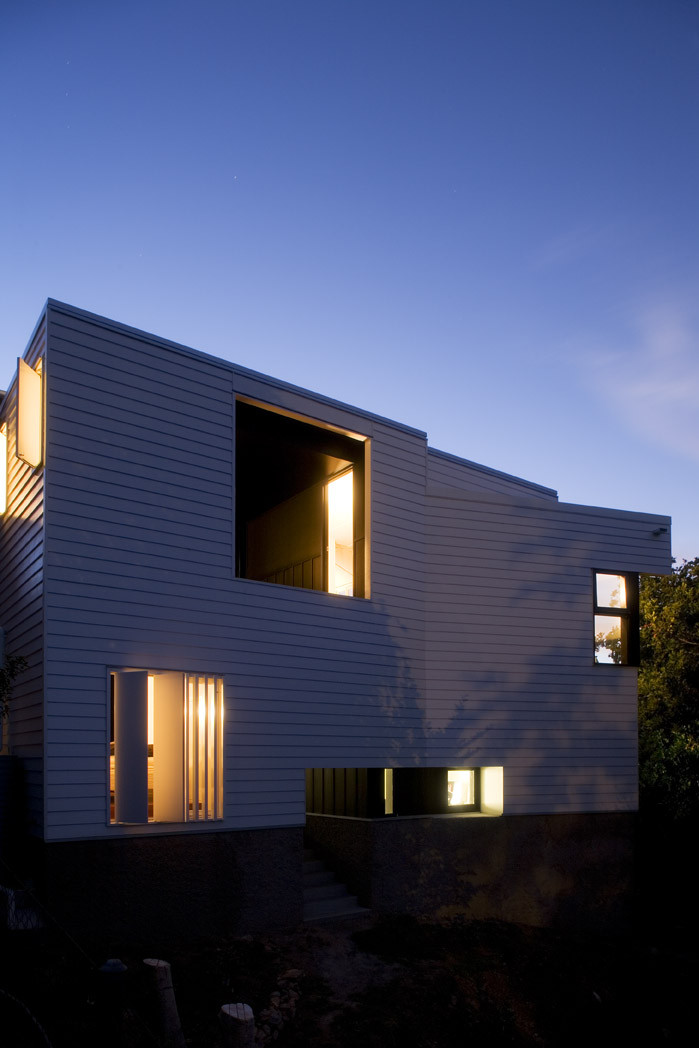 The same large opening cannot be closed-off to undesirable weather conditions, reinforcing the nature of the stair (promenade) and nature (garden). 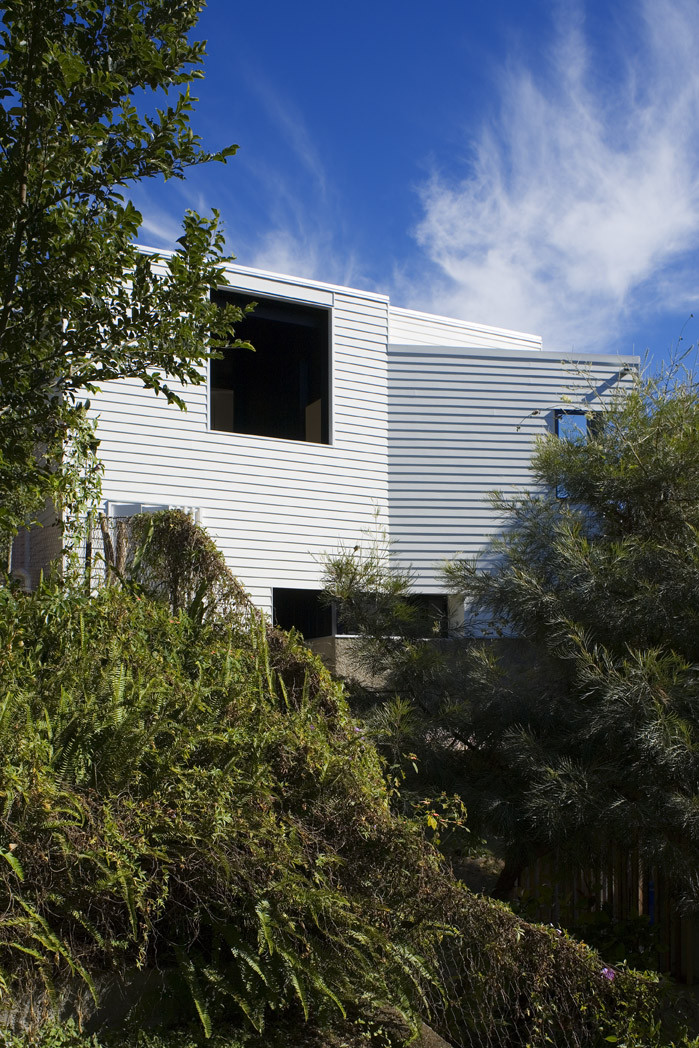 The application of Loos' room planning technique assisted in optimising the tall space — deploying rooms over effectively three levels in what is constrained by authorities as a two storey structure - reminding us of the story of Loos' Villa Mueller in Prague. 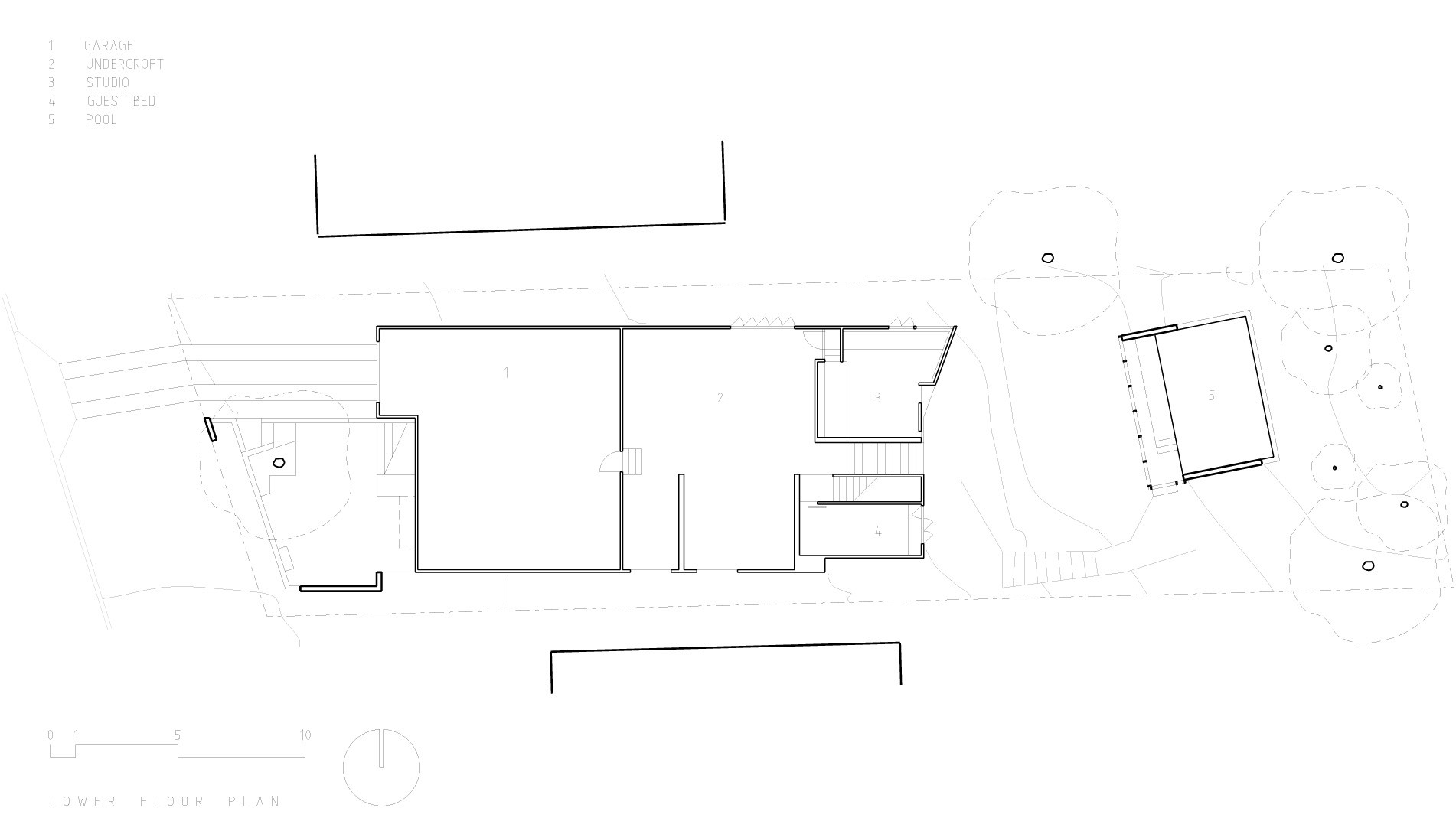 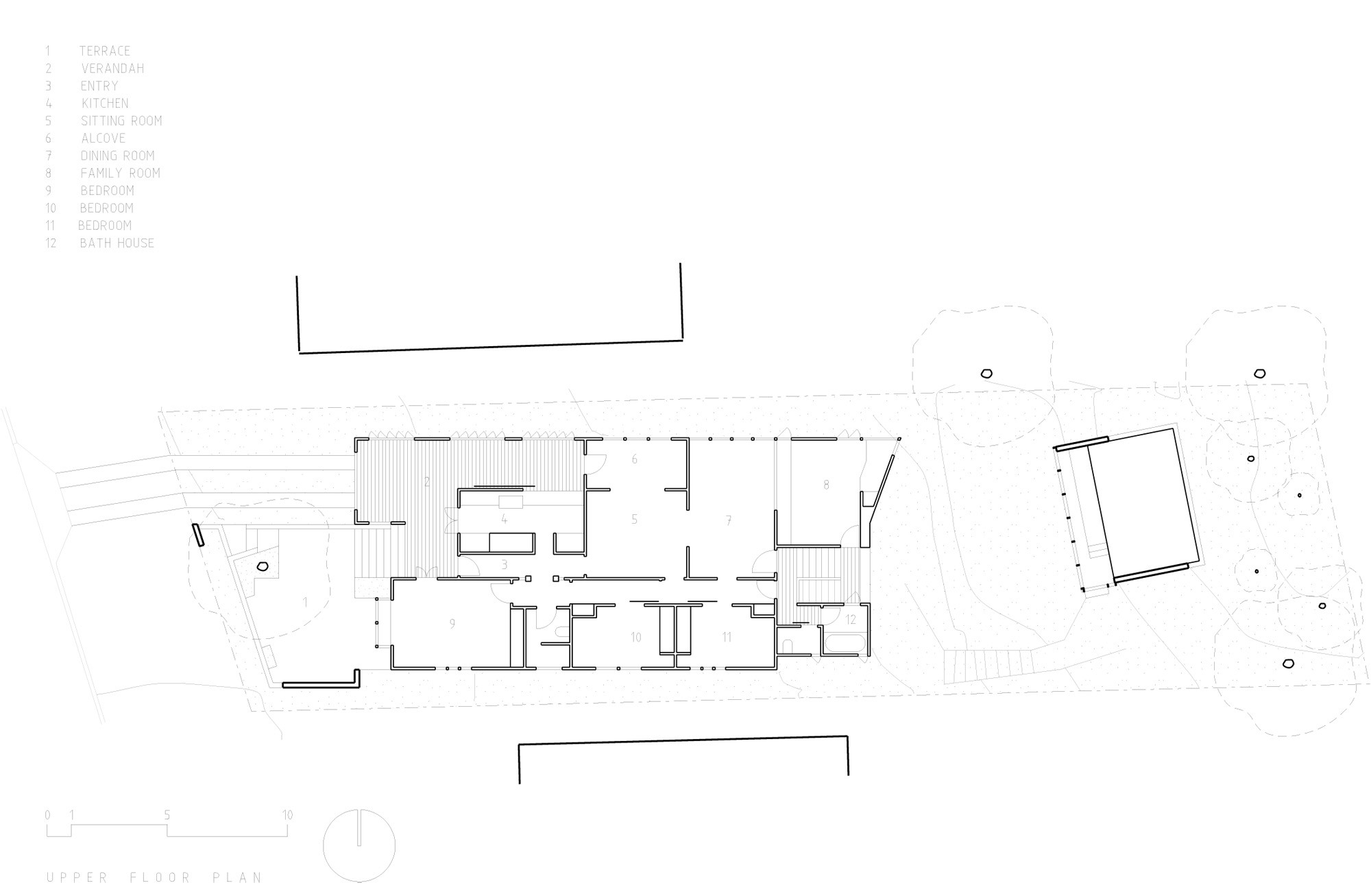 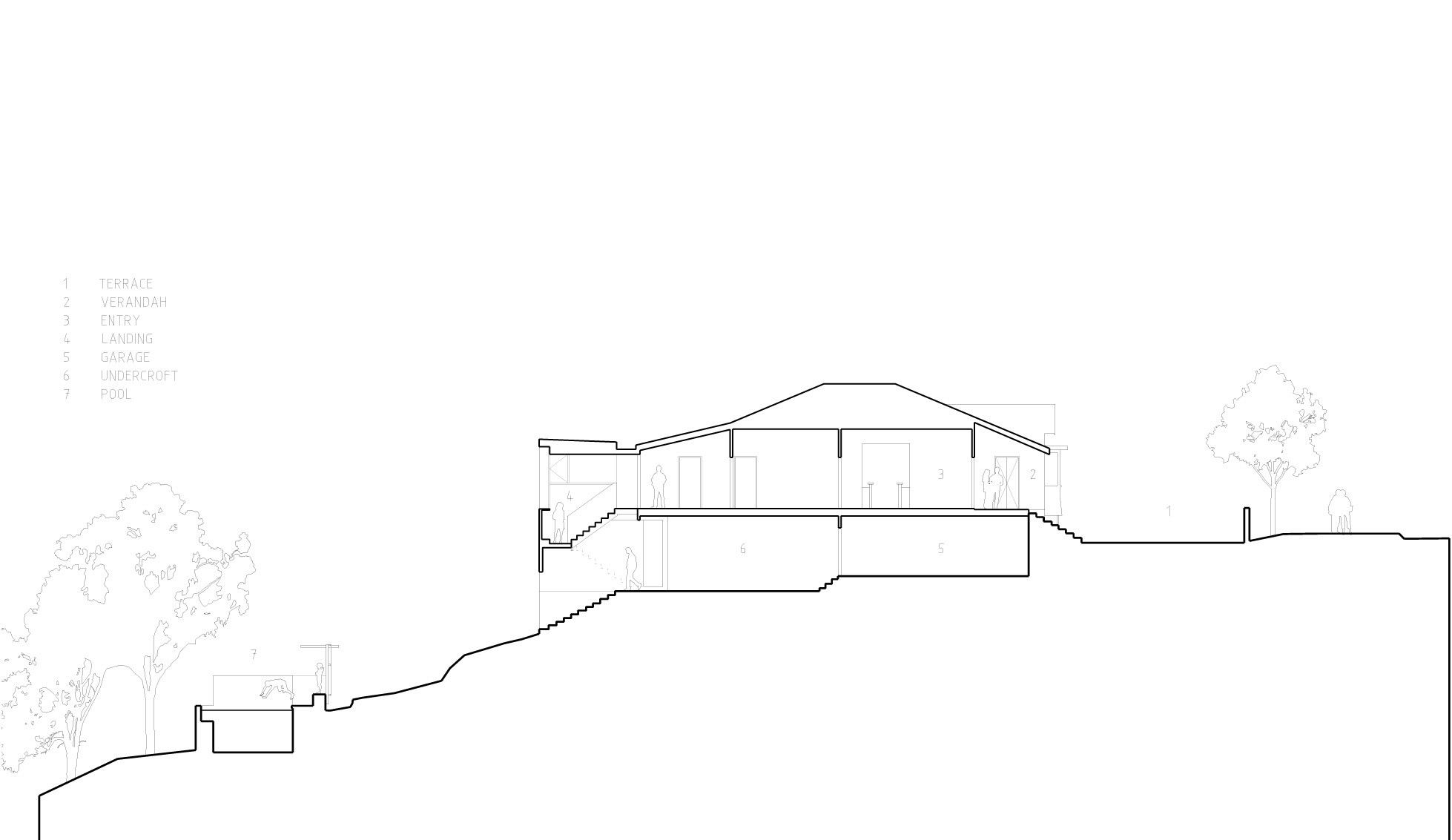 Balmoral House overcomes what is a very constrained site — and a common problem in the suburbs — to become a real delight. A modern Queenslander that relates well to the garden, light and cooling breezes. Looking out the large opening, no one would realise they're boxed in on all sides by neighbouring properties.