Cloud House: Conservative in Front, But a Radical Surprise Out Back 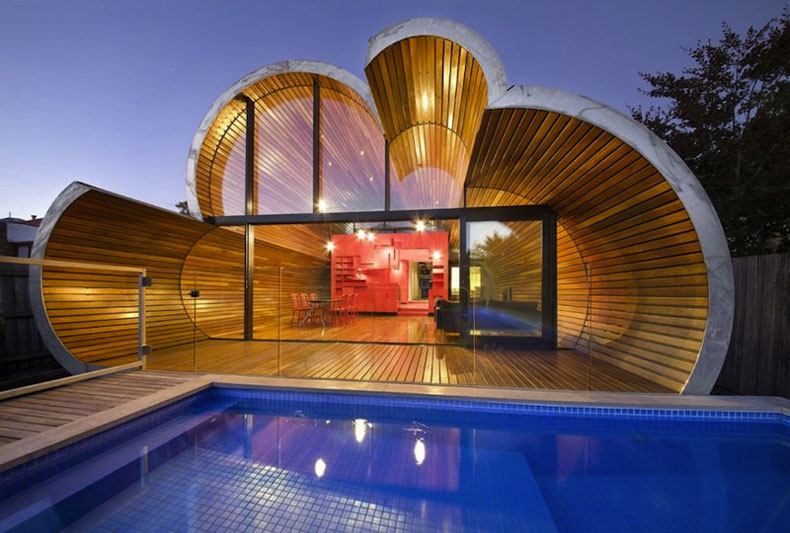 You could think of this as a mullet house - it has a conservative, traditional front, but it's rocking a radical style (and having a hell of a time) out the back. It's far from your typical rear extension, that's for sure!

It's known as The Cloud House (for obvious reasons) and it's a recent home extension by architects, McBride Charles Ryan. From the front it's just your typical Victorian-era home in Melbourne's inner-city suburb, Fitzroy North. From the back, it's a whole other story, stemming from surprisingly rational origins... 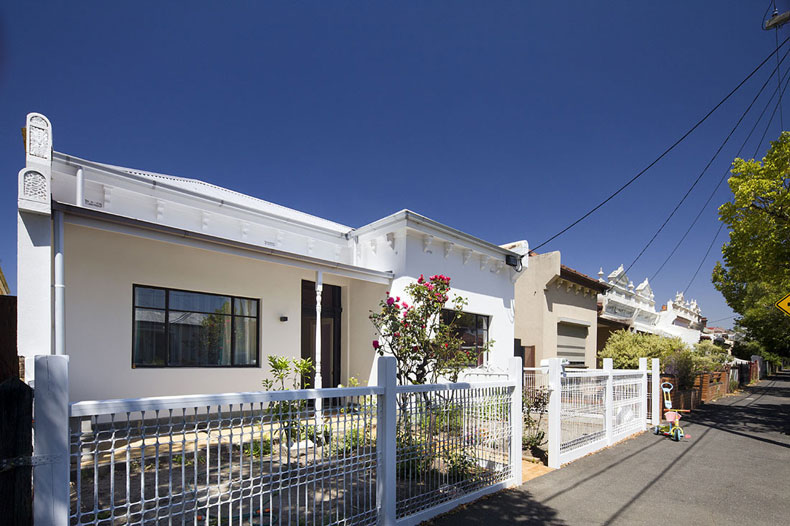 Nothing unusual from the front: The traditional Victorian-era frontage belies the unique, modern extension to the rear. 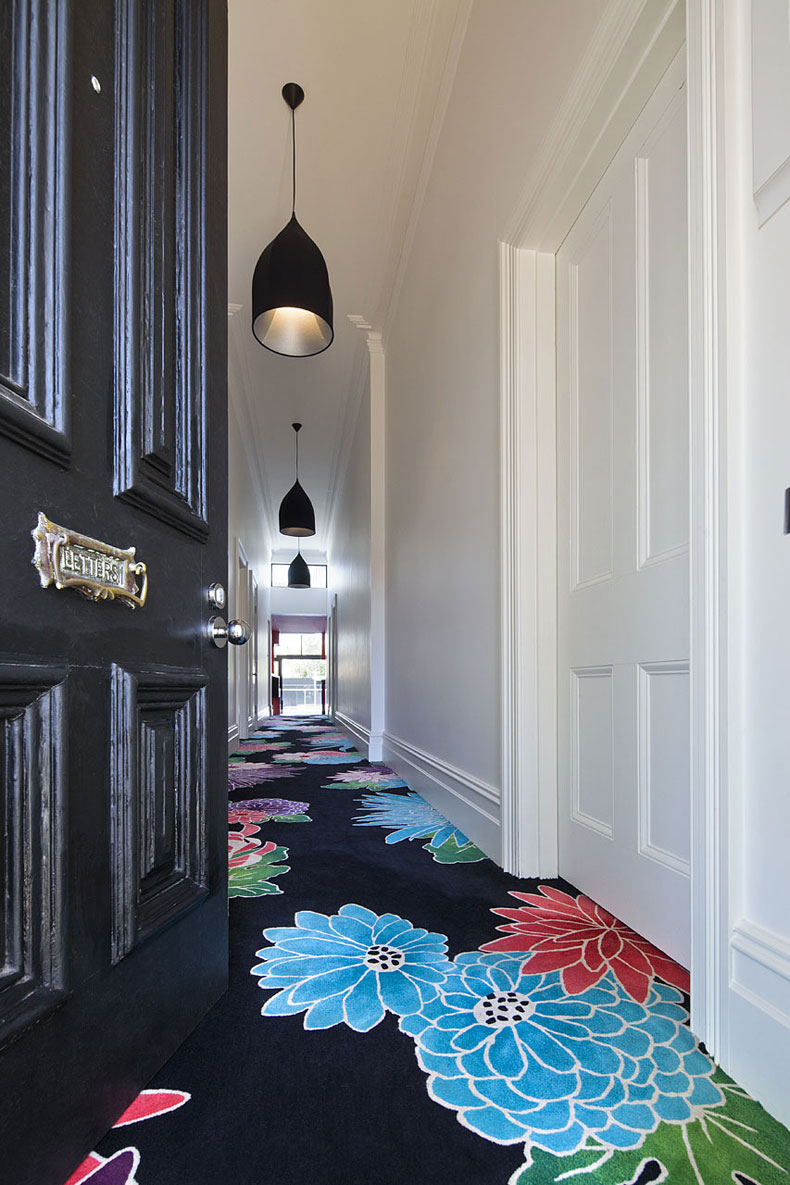 A Bright Floral Print: From the front door, carpet with a bright, floral print is the only hint that there is something more to this typical Victorian-era home. 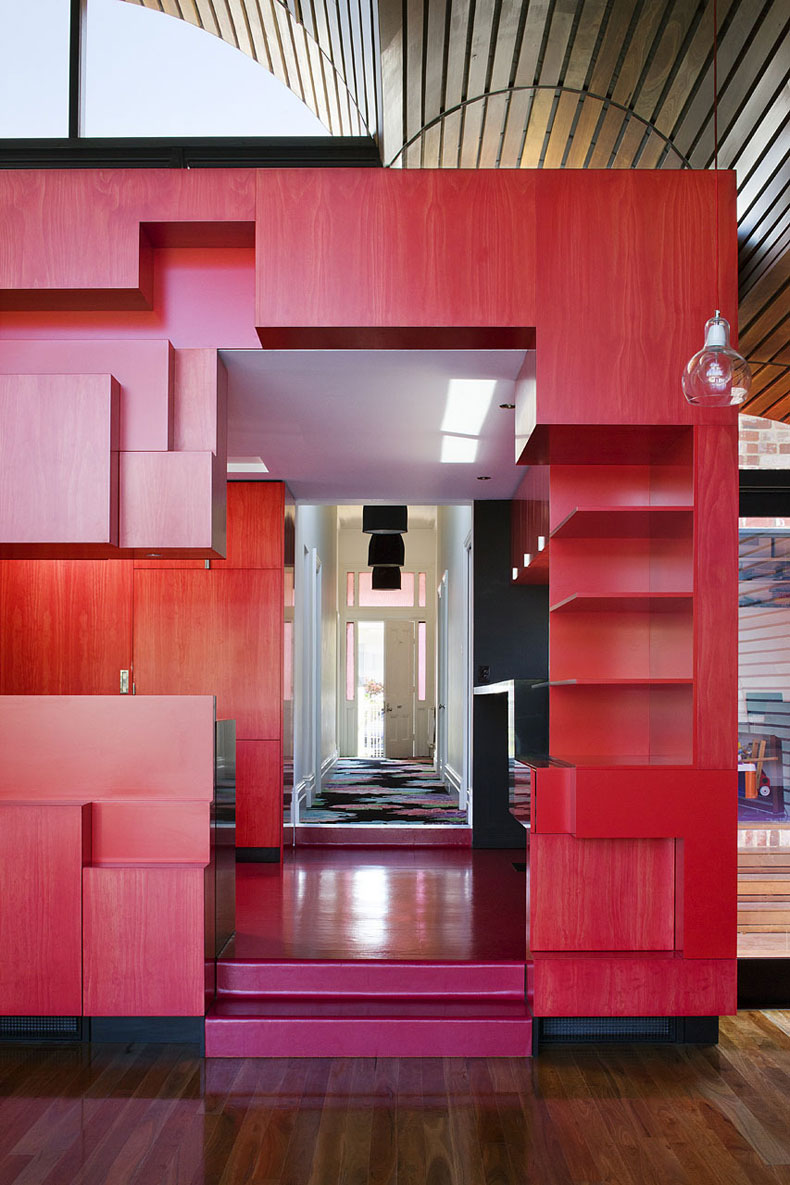 Three Homes in One

The house is broken into three distinct parts:

This is a house of experiences. 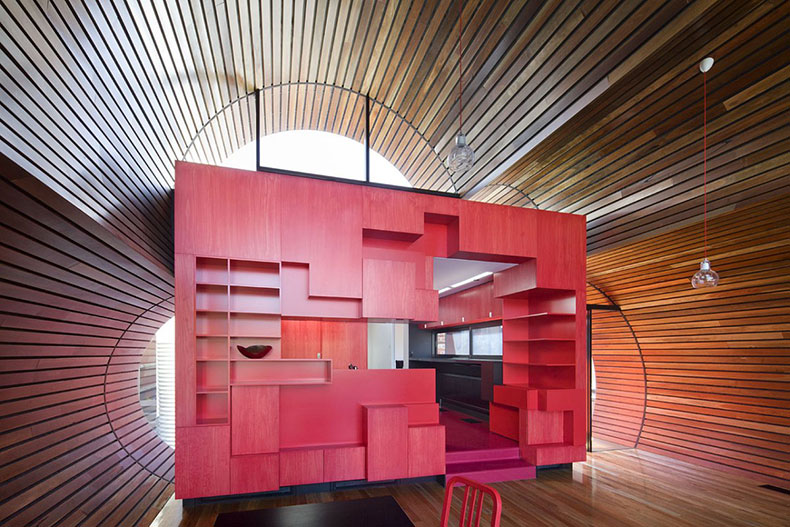 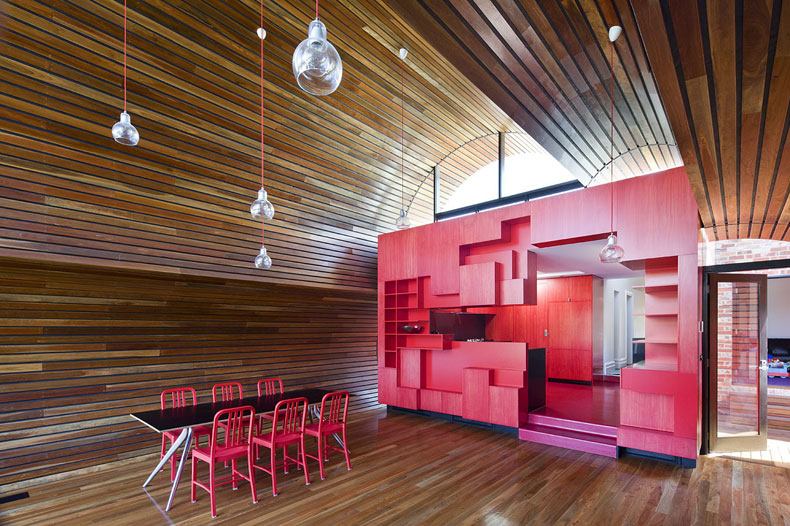 Cloud-shaped Clerestory Windows: The extruded cloud shape allows natural light into the living area through clerestory windows above the kitchen.

The Real Reason for the Cloud Shape

Yes, it's fun. But it's not just different for the sake of being different...

Despite it's whacky appearance, the Cloud House takes its shape from something far more rational -- it (playfully) adheres to the boundary height and setback regulations.

In Melbourne, setbacks and height-on-boundary regulations are an important planning control used to minimize the impact new development has on its neighbors. This is particularly important in Melbourne's inner suburbs where people rightly value their sunlight and privacy, but where it is also important to develop and infill available space to achieve greater density. However, these controls tend to place arbitrary rules on development and often result in thoughtless and boxy development to take full advantage of space.

The Cloud House plays within the rules to create a space that is the opposite of thoughtless and boxy. It is fun, lively (and just a little tongue-in-cheek).

It's Light and Bright Too

The new extension faces south -- not ideal when designing for passive solar heating. So the decision to separate the home into three parts -- the original, the lower height kitchen and the lofting cloud, was a clever technique to access precious North light. Thanks to the shape and height of the cloud, North light can enter the main living space through, what are essentially, clerestory windows. 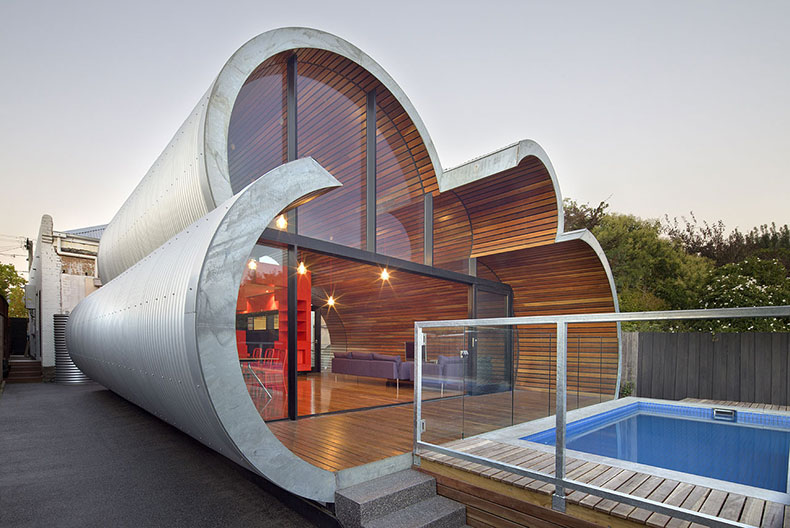 A cloud with more than one lining: The rich timber lining of the inside makes way for a more rustic and down-to-earth corrugated iron on the outside. 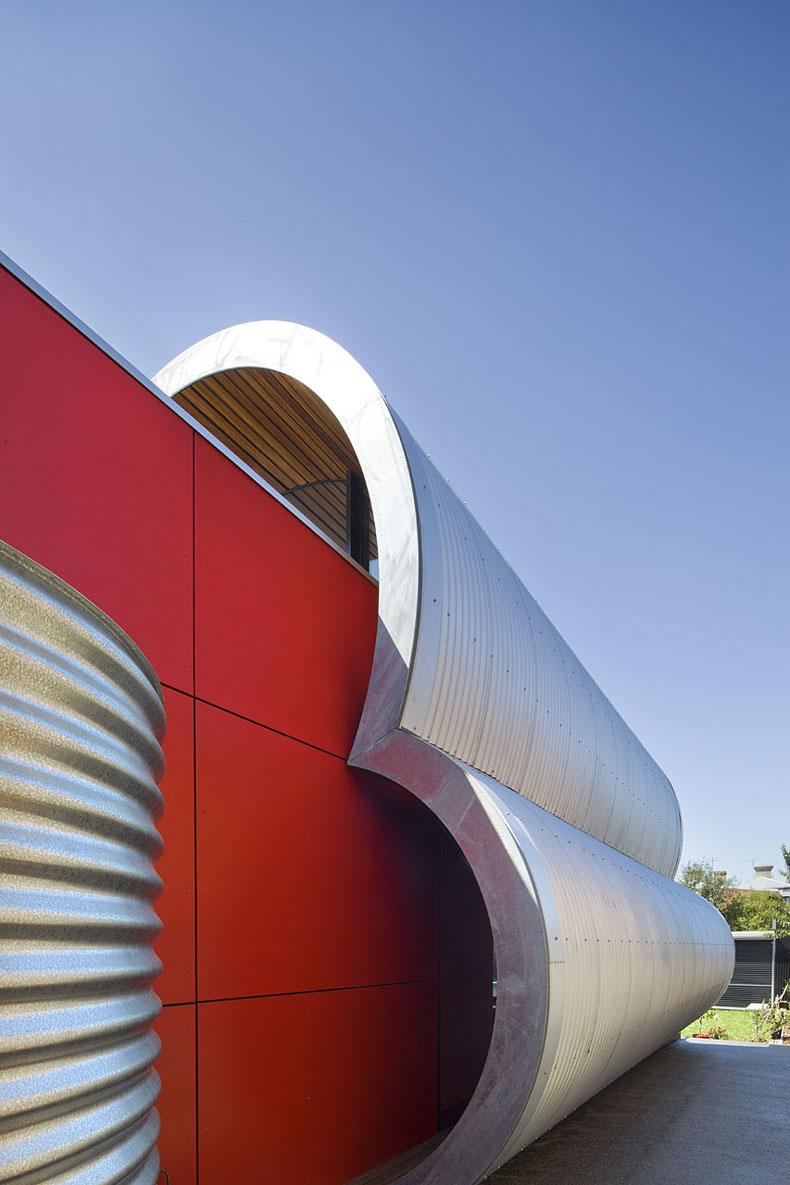 A cloud with more than one lining: When juxtaposed against the water-tank, the Australian reference of the Cloud House's barrel vaults becomes obvious. 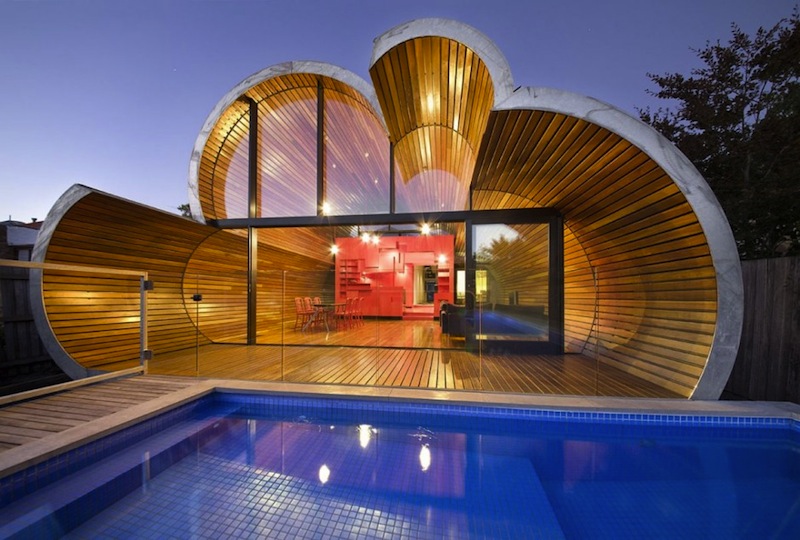 The curves of the Cloud House are a modern interpretation of the barrel vault. Barrel vaults are typically found in more elaborate -- usually public -- buildings. So using them in this project and covering them with such beautiful timber was a way to give the living area a sense of majesty. From the outside you realize these barrel vaults have a distinctly Australian feel to them -- they're covered in corrugated iron. All of a sudden you see them as oversized water tanks. The contrast is humble and humorous -- and aren't they very Australian qualities?

While calling it a mullet house has a fun ring to it, that wouldn't be giving the home enough credit. The Cloud House is an exciting and thoughtful addition. The cloud shape is fun, there's no doubt about it. But it's also considered and solves a lot of problems. That's the best part about good architecture -- it's interesting and unusual, but not for the sake of it.

On first glance it might seem silly -- a cloud house. But sit in that living space. Notice the warmth of being surrounded by natural timber. Feel enlivened by the fiery red kitchen joinery. And enjoy the beams of natural light as they stream through the cloud-shaped windows. Do that, and see if you still think it's silly.

You won't. Because this cloud has more than one silver lining. 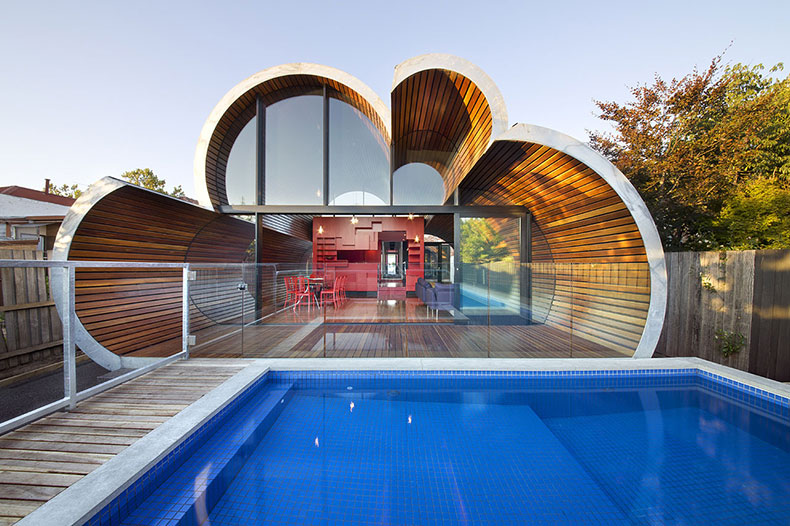