Ilma Grove House is an extension to a heritage home in Northcote, Victoria. The extension provides a lot more than just additional space to the current home for three, it provides the environment for a sustainable lifestyle. From the beginning of the design process, the idea of a sustainable home was part of the brief. The client wanted a place which could be practical and could help their family reduce their ecological footprint… 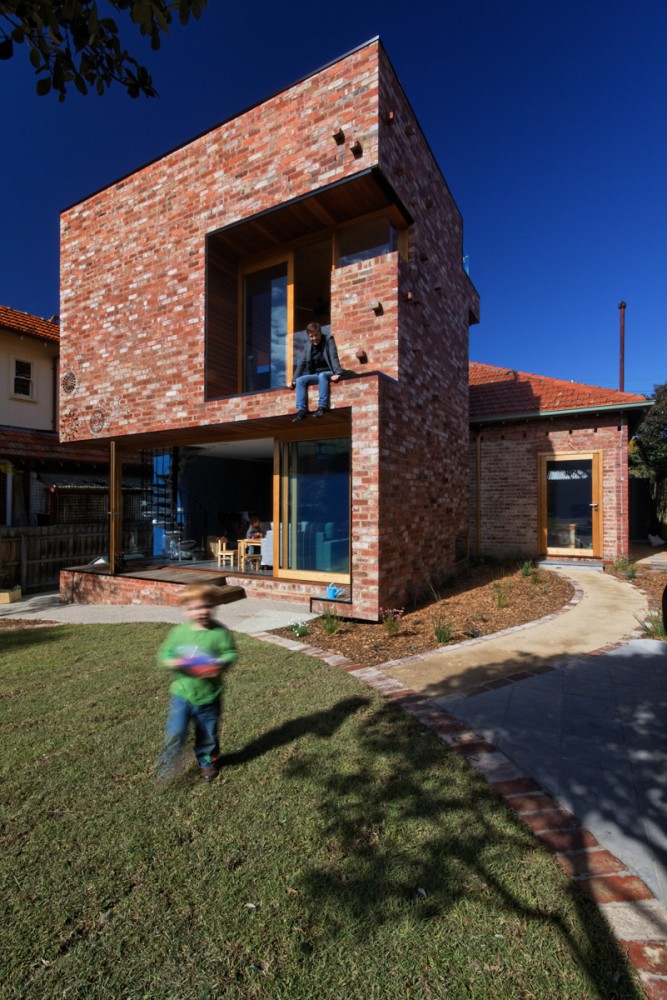 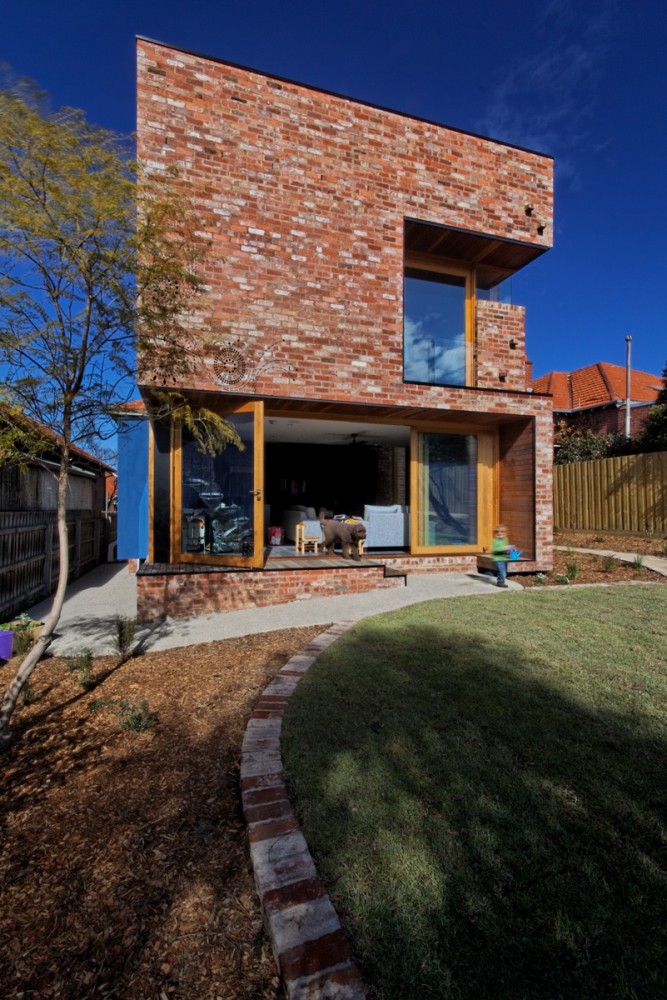 The Ilma Grove House is Andrew Maynard Architects' greenest house so far. Its planning and orientation is based solidly around passive solar efficiency. All roof captured rain water is harvested. It has solar panels, high performance insulation, recycled materials, LowE coated double glazing, low VOC materials and, most importantly, it is small. 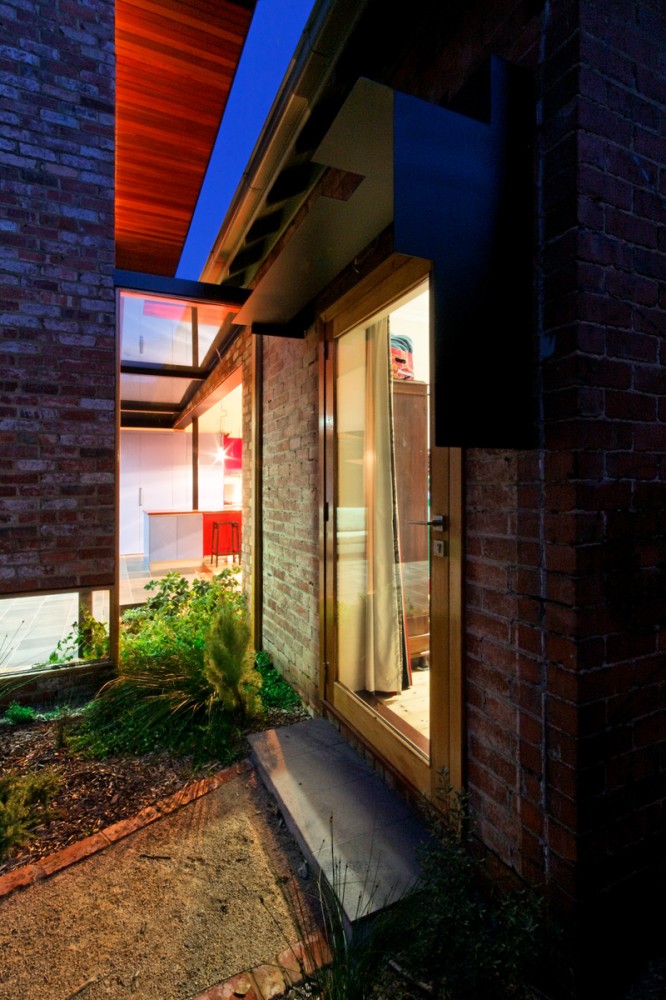 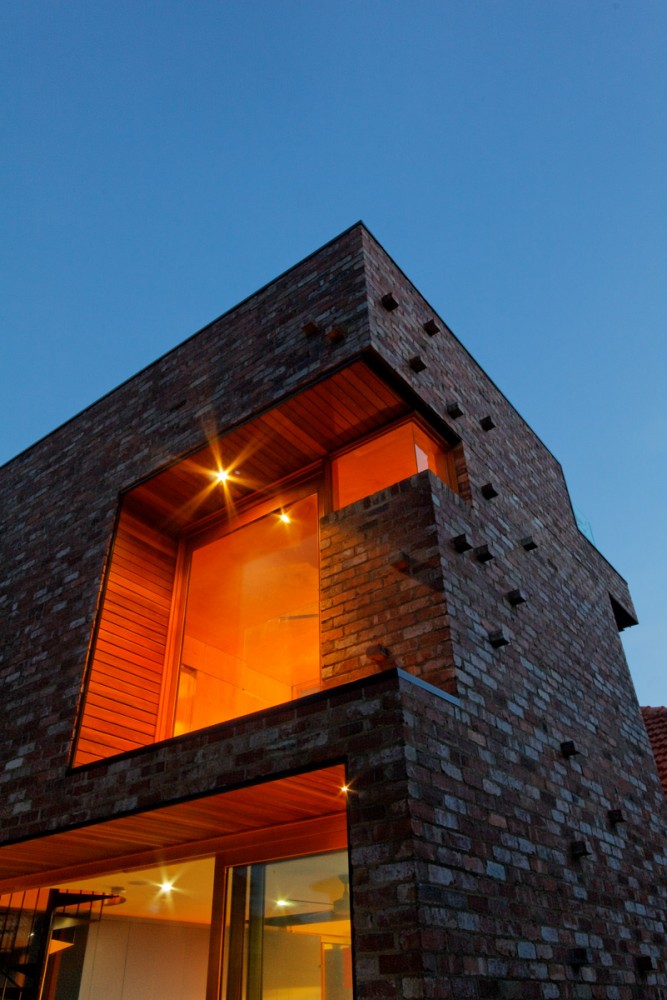 Brick lean-tos at the rear of the original house were demolished limiting the adaptation of old part of the house & containing it within the hipped roof. This allowed the extension to sit next to the original structure rather than invading the rear of the existing building, avoiding extra costs in demolition and reducing construction waste. Adhering to the principal of “small is green” (less waste, less electricity consumption, less materials, less cost) the result is a functional open plan, where maximizing passive solar gain becomes indispensable. A master bedroom has been included on the first floor with a roof terrace above that overlooks the city to the south and the Dandenong ranges to the east. 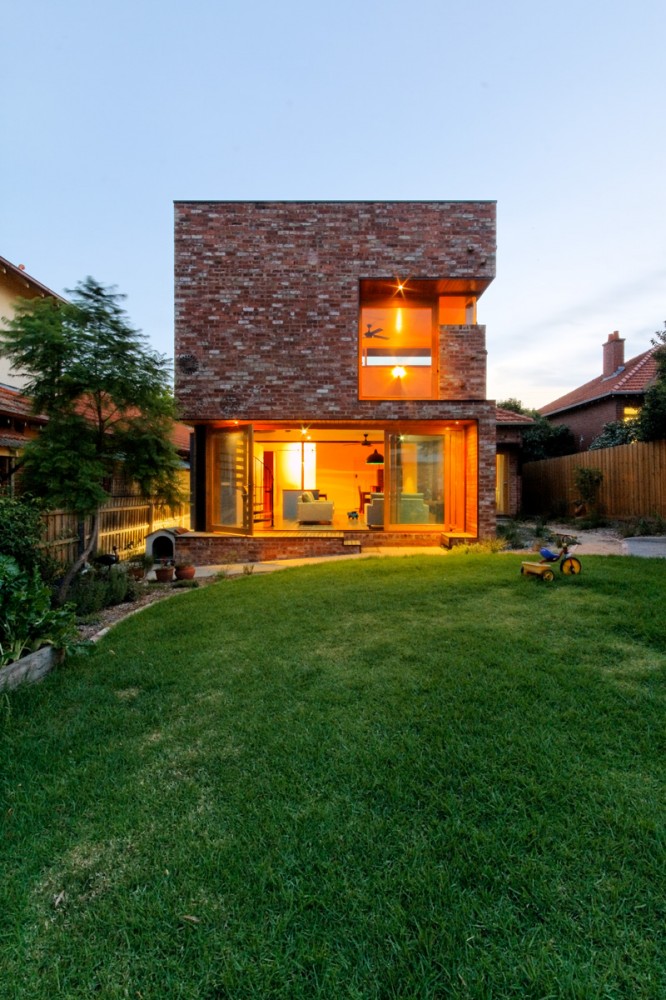 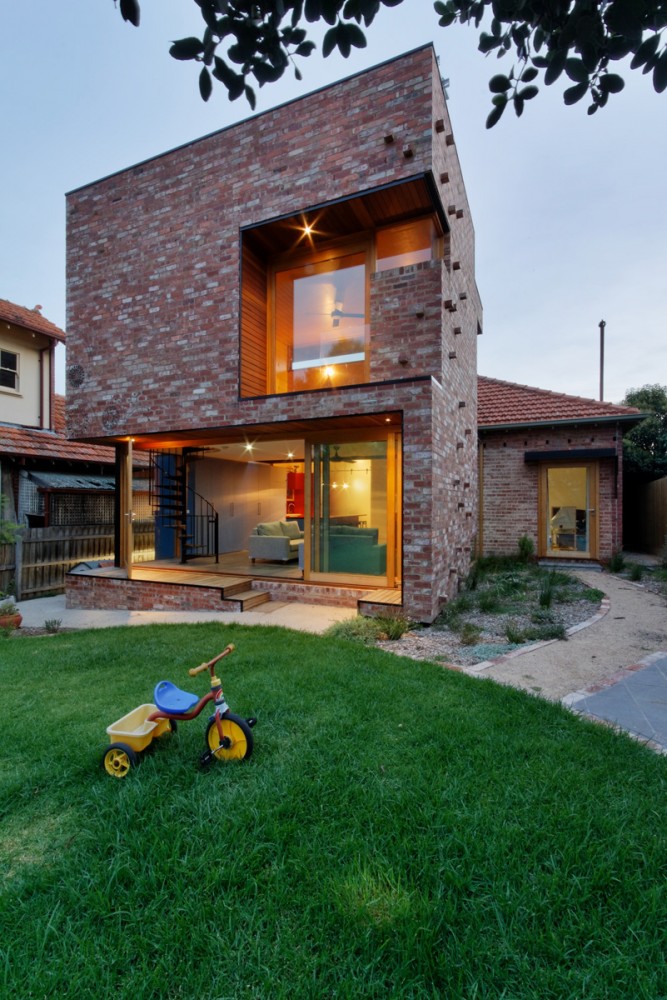 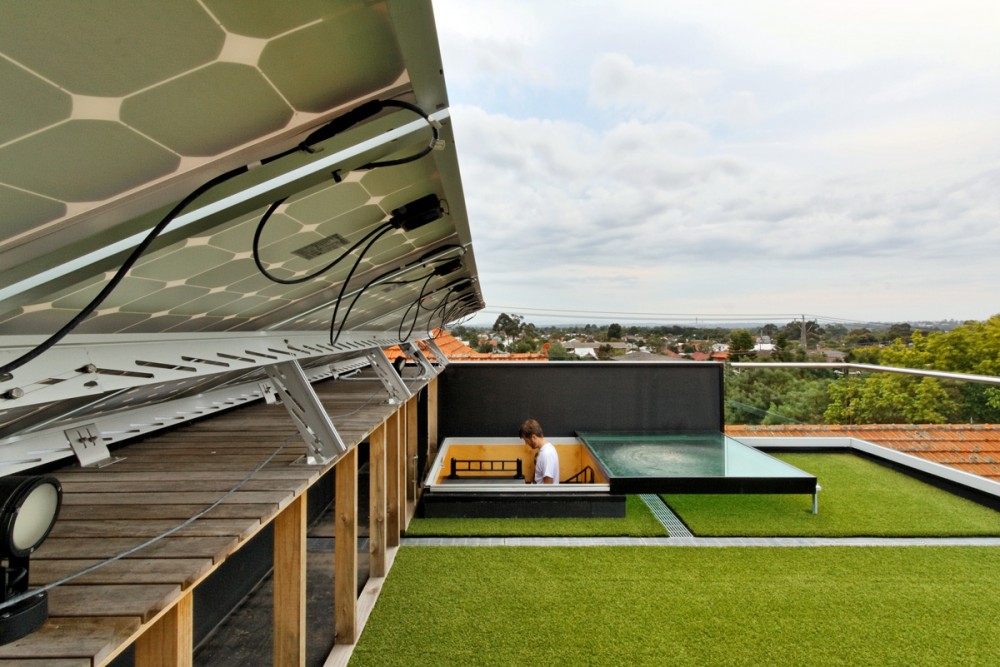 Andrew Maynard Architects took advantage of the north facing backyard, and developed an exploration of mass where segments were carved out in order to maximize sun penetration. This generated a geometrical structure where the internal flesh of the box is revealed with rich timber surfaces, contrasting the raw recycled brickwork. 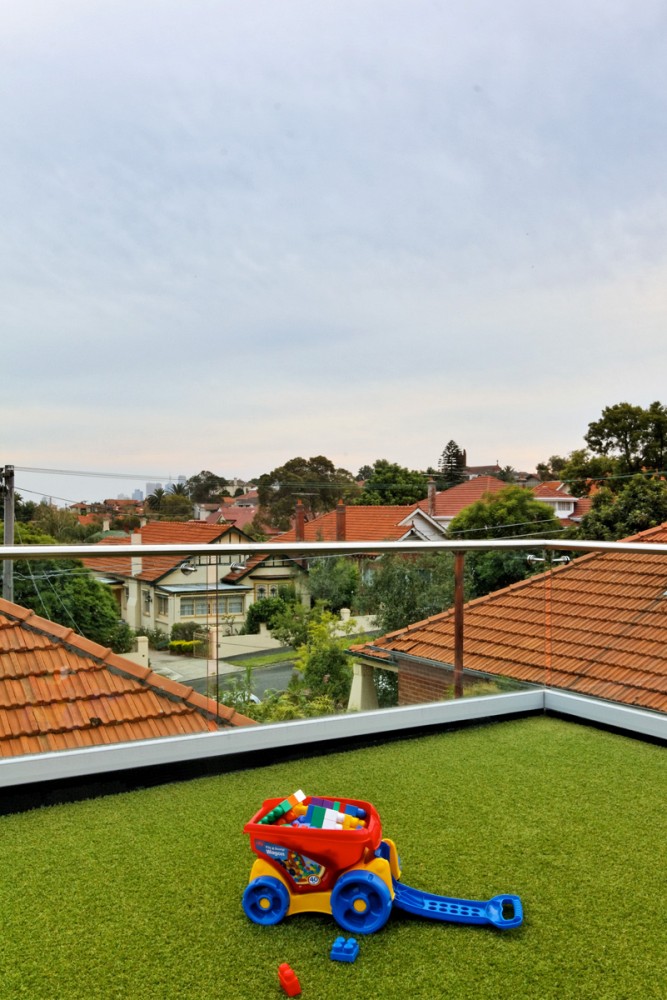 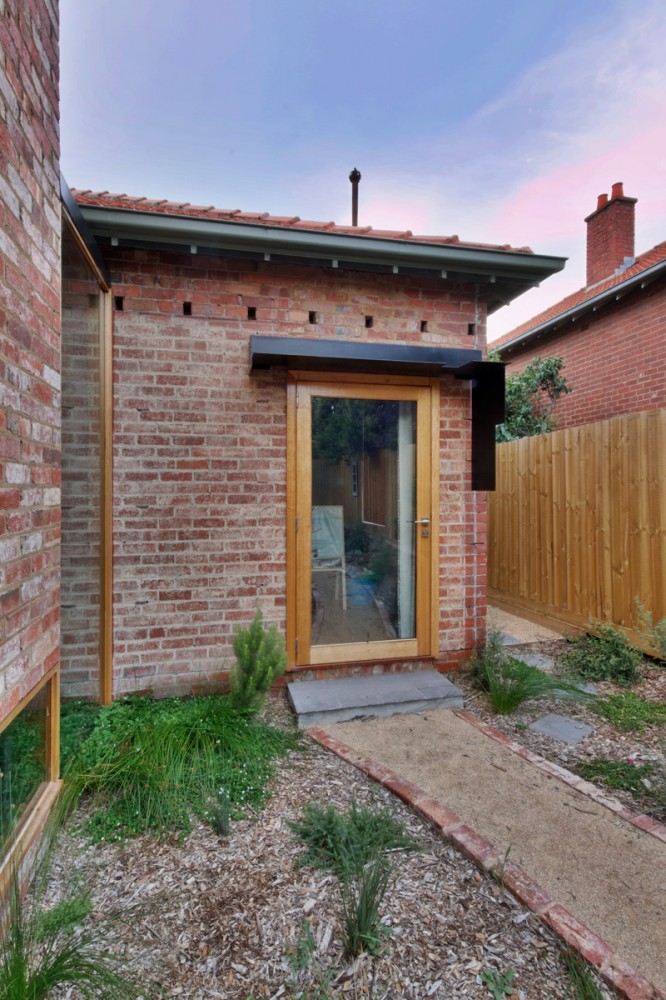 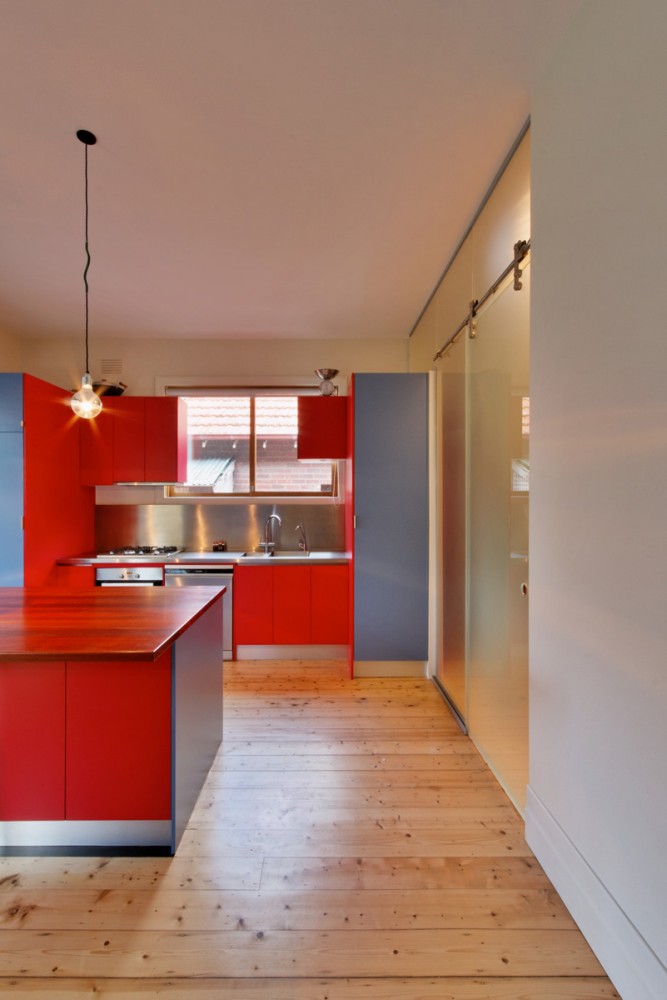 The interaction between levels and the idea of blurring lines between new and old, inside and out, introduced the idea of integrating the backyard into the interior of the house, carving the garden inside, which currently is being used to grow tomatoes. 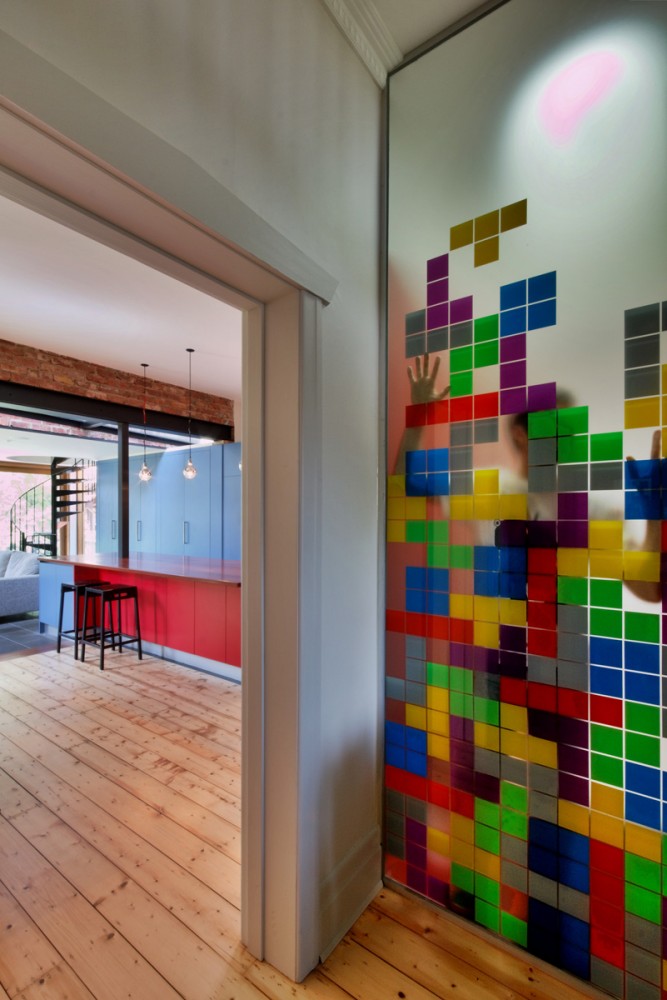 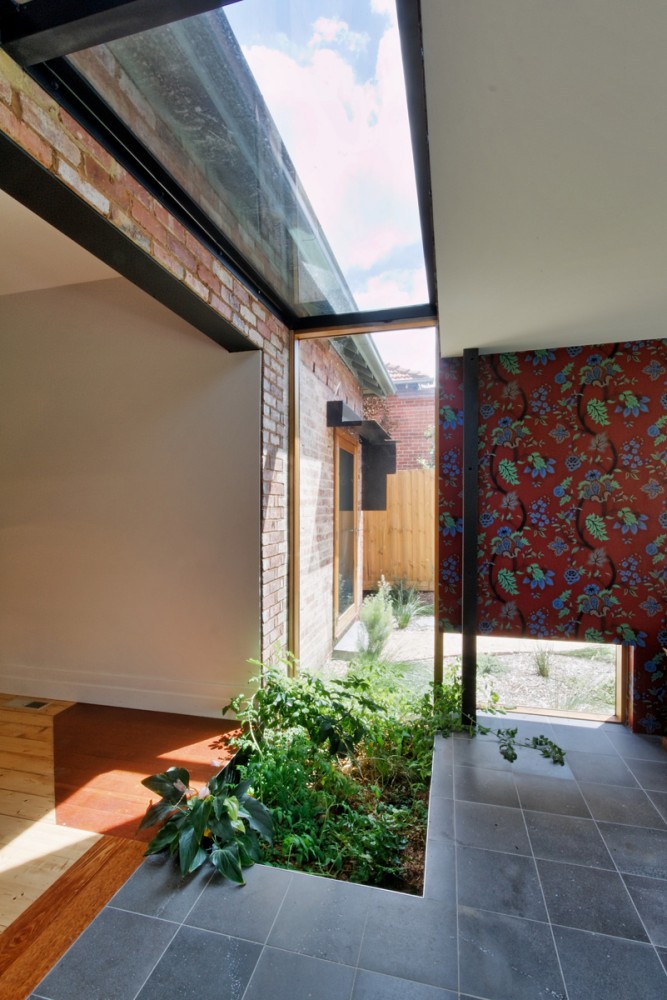 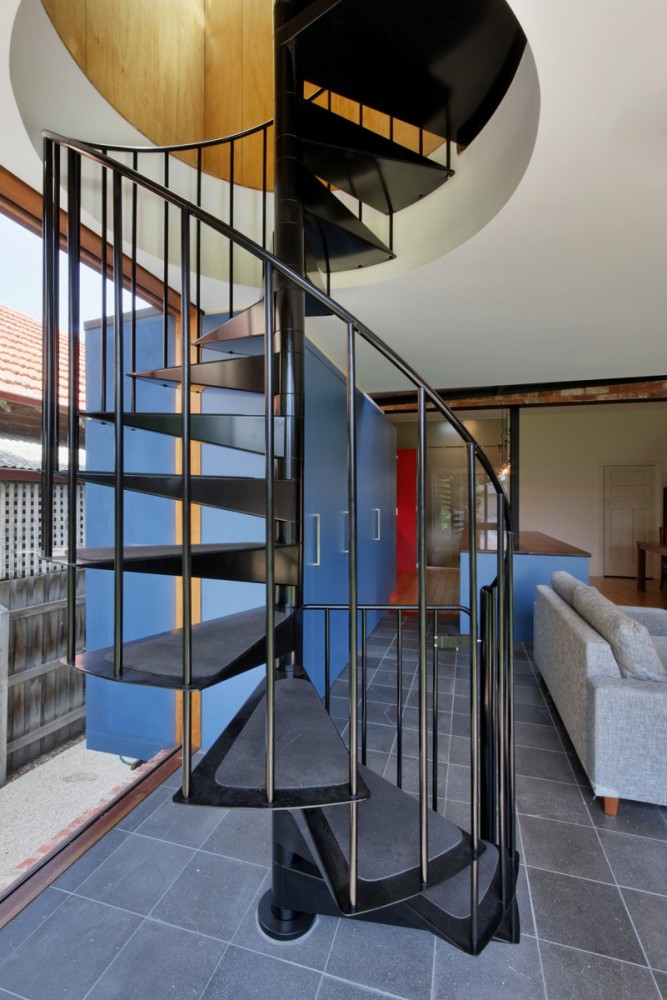 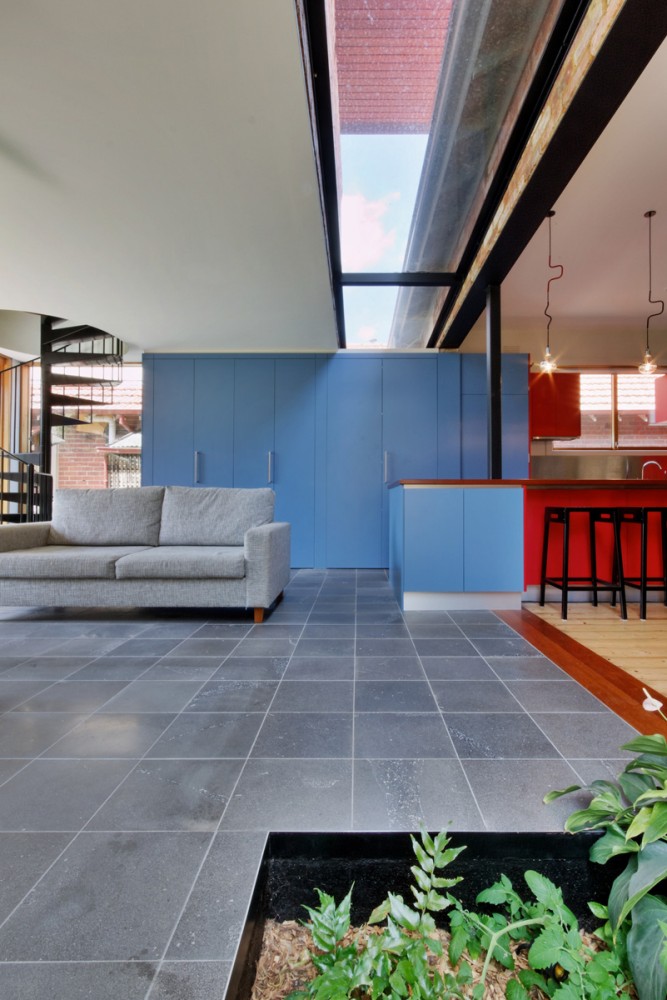 The internal flooring is locally sourced bluestone with the intention that using locally produced materials shortens transport distances, thus reducing CO2. The dark, dense nature of bluestone acts as a thermal mass soaking up the low winter sun & passively heating the house. In summer the high sun does not come into contact with the bluestone allowing the floor to act as a cooling mass in the hotter months. LowE coated double glazed throughout the house ensures that heat is retained in winter and reduces the penetration of heat in summer. These design features completely remove the need for air-conditioning and drastically reduce the necessity of heating throughout the colder months. 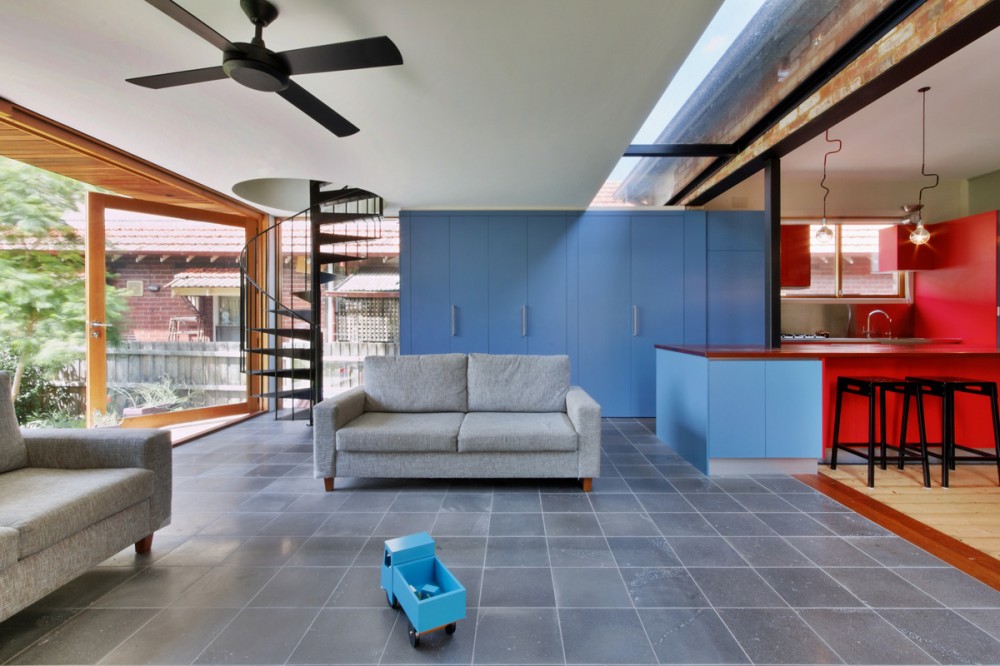 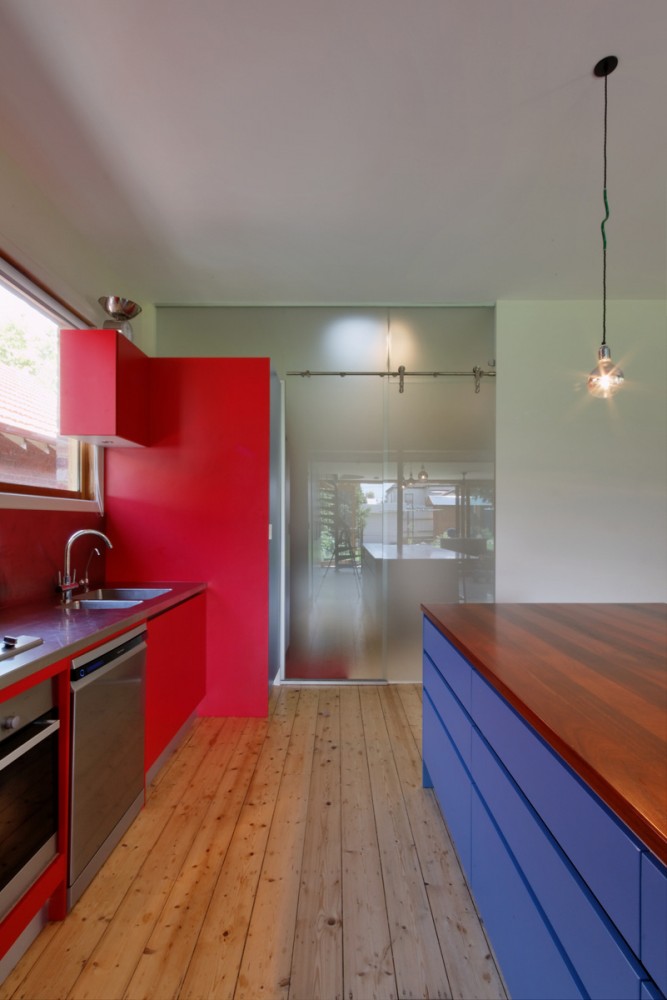 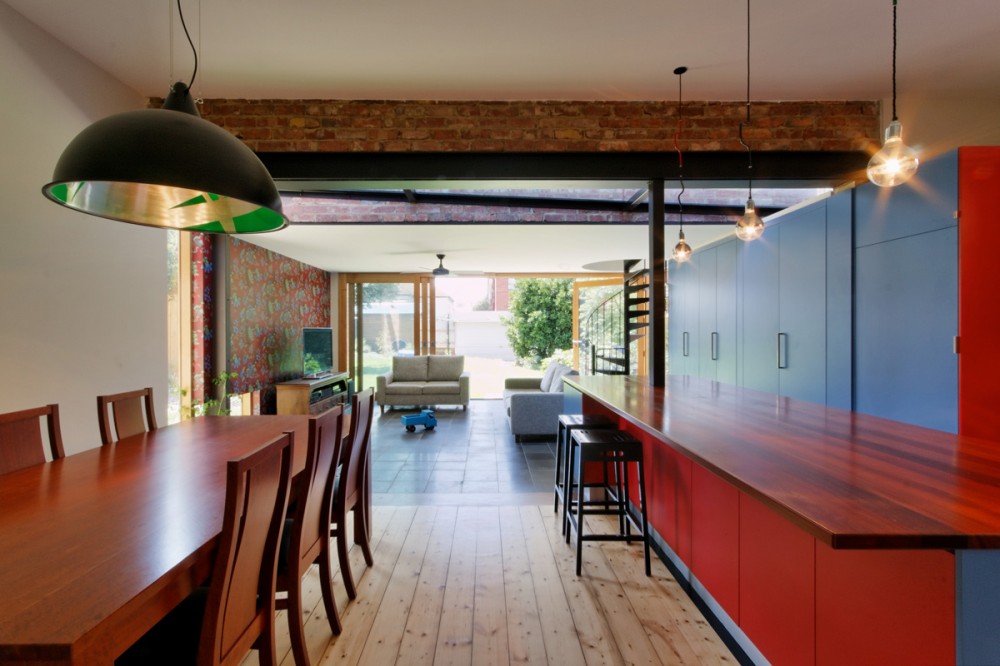 The choice of materials was a vital step in order to create a sustainable structure. It was decided to re-use/re-assemble the existing bricks from the demolished areas of the old part of the house to form the new addition; blurring the line between what is new and what is old. Using recycled materials is a sustainable choice, however there is still a carbon debt accrued by the transport and reworking of materials.

The Ilma Grove House avoids this by reusing the bricks of the demolished lean-to on site; what was demolished has been rebuilt in a new configuration. This not only avoids waste, landfill and transportation of materials, furthermore it ties the material language of the new structure back into the original house. Face brick masonry is also a durable and a low maintenance material which can potentially be recycled again. Reinforcing the thermal performance of the recycled brick is high performance insulation that has been installed throughout the home. 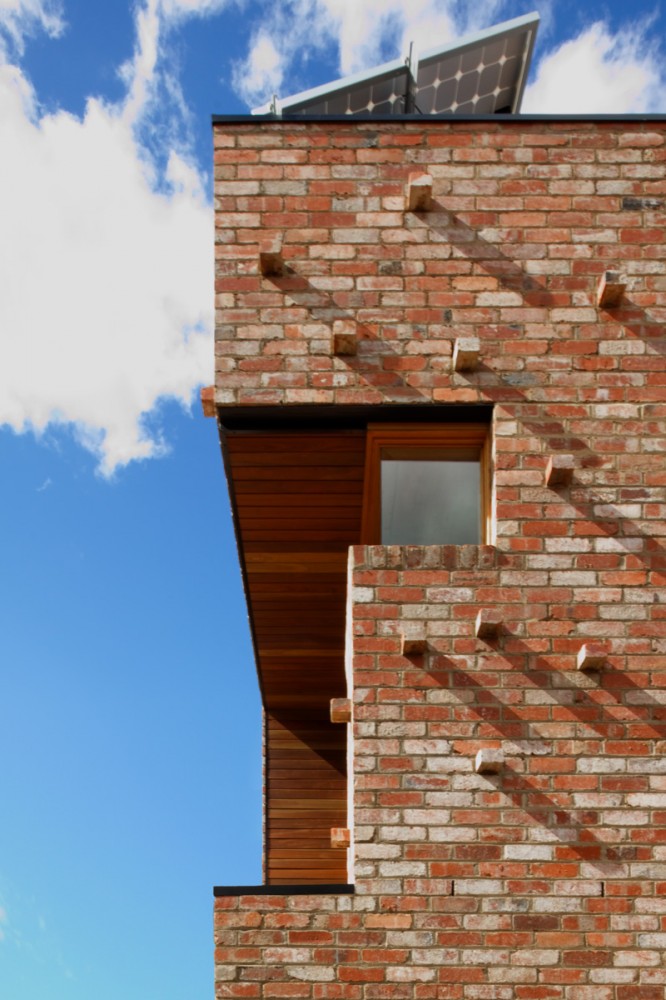 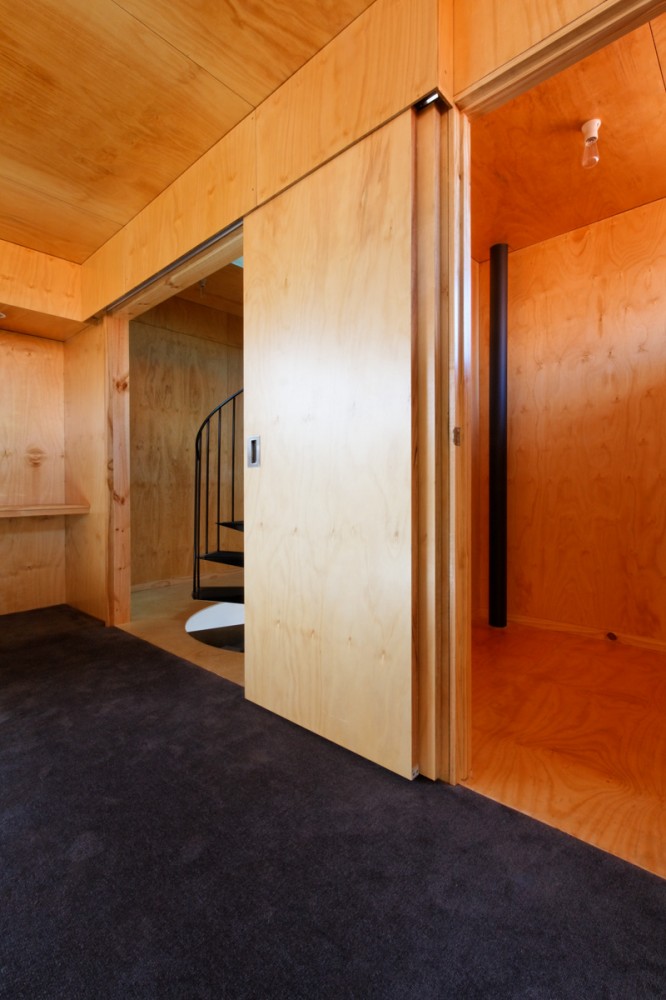 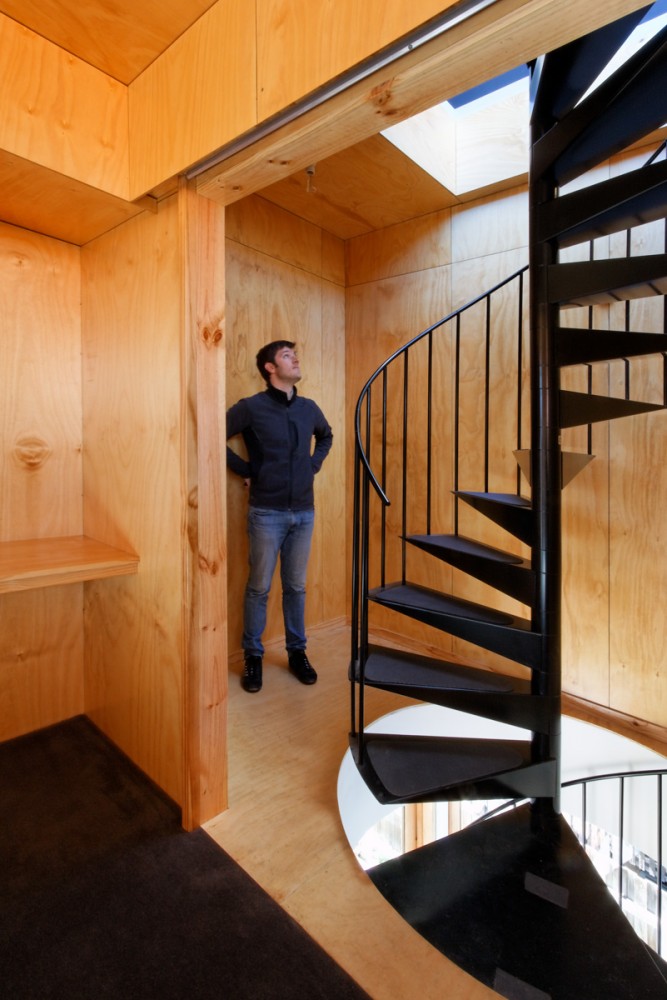 After lengthy discussions about the brief the client made a conscious choice not to have an en-suite upstairs. This helped to reduce the size of the addition while also reducing the embodied energy that comes with doubling up on functions and equipment within the home. 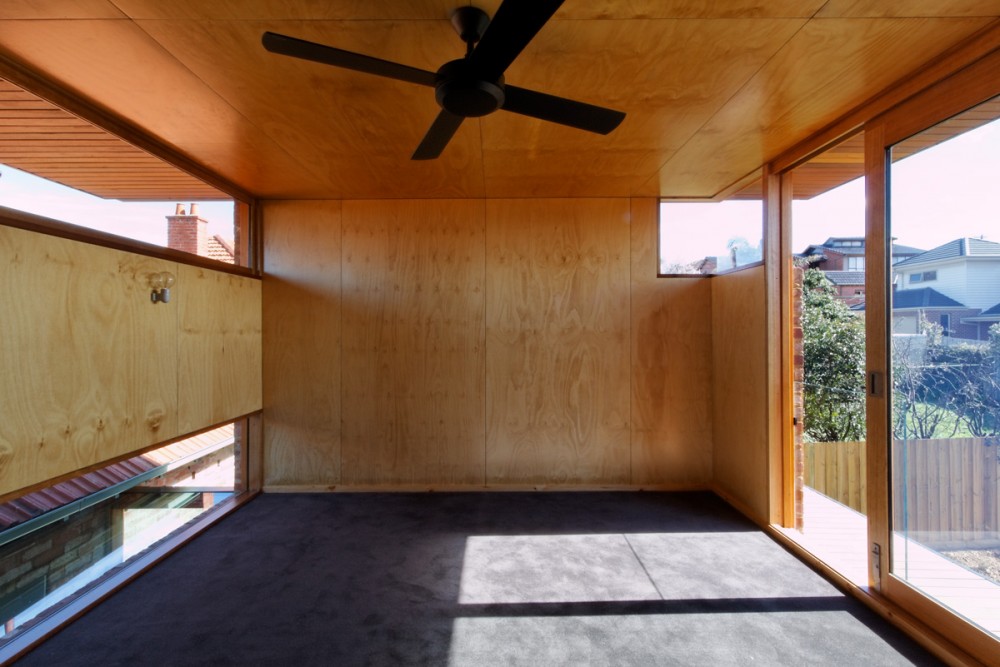 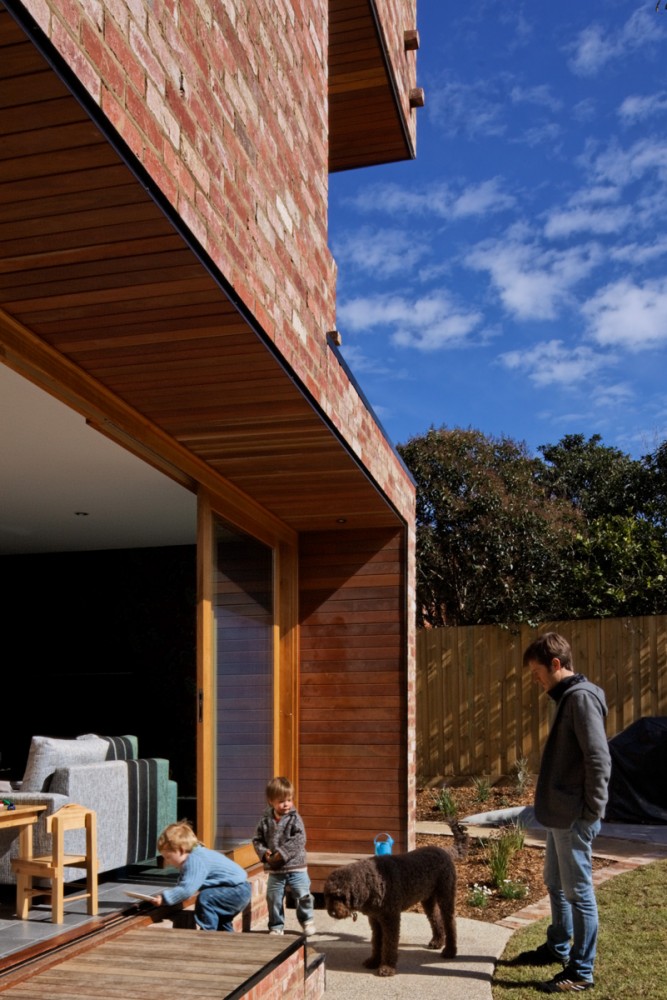 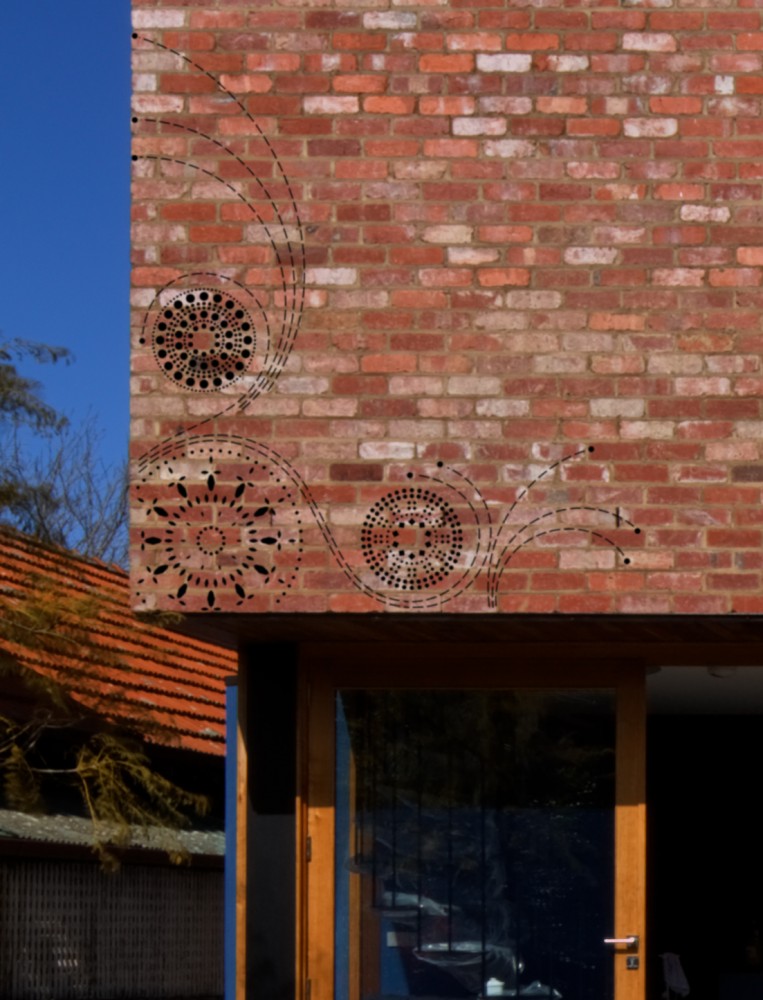 Energy from the Sun

Solar panels have been added to make the house coal independent. Ample solar energy is harvested in winter, while a surplus of energy is fed back into the power grid in summer. 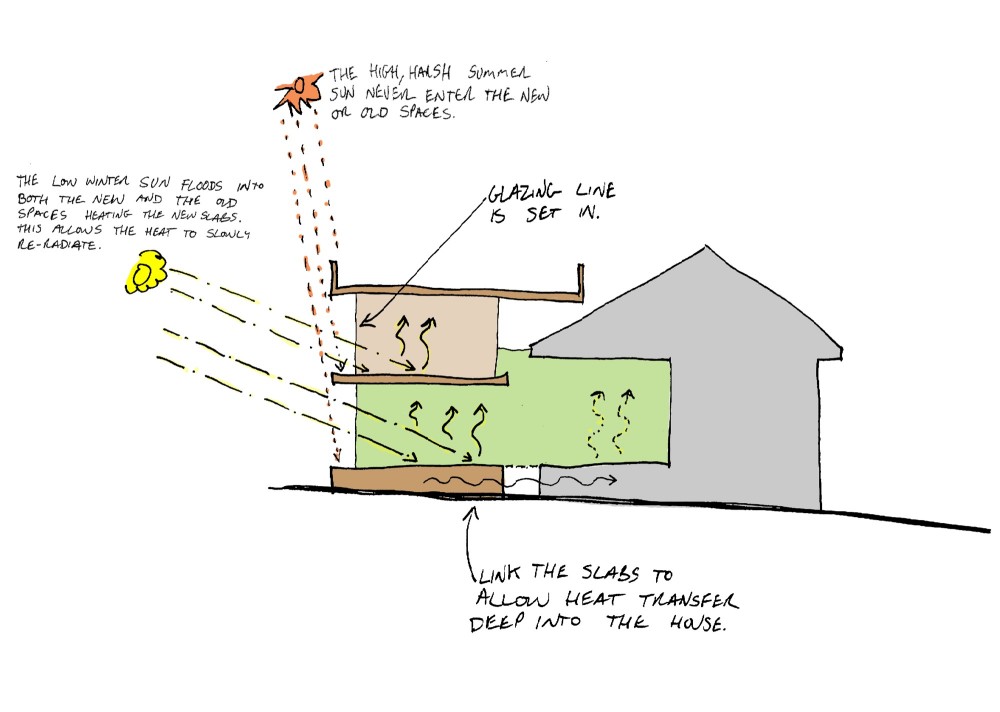 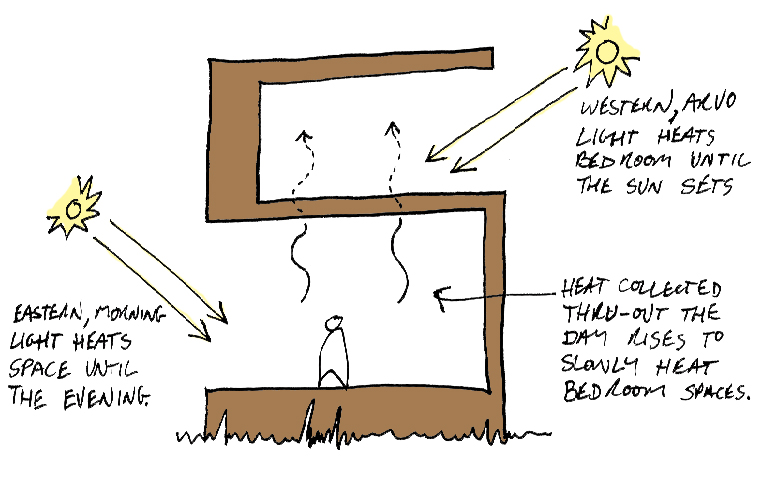 Modest Home on a Large Block

The temptation on a large block is to make a large home. This has been resisted. Maximizing the outdoor space and connecting with it so that it has become a natural extension of the living space was the key. A small house is a sustainable house. 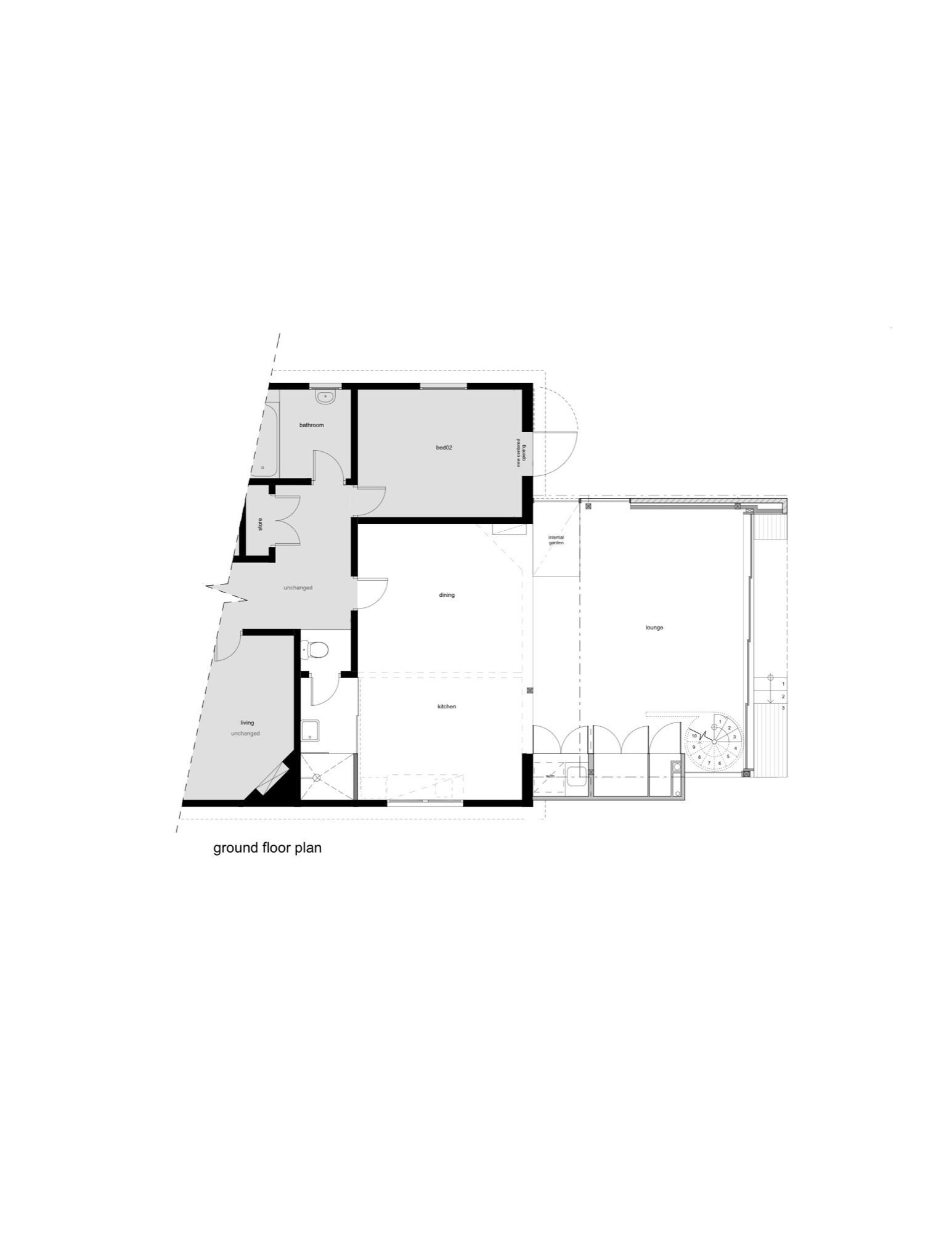 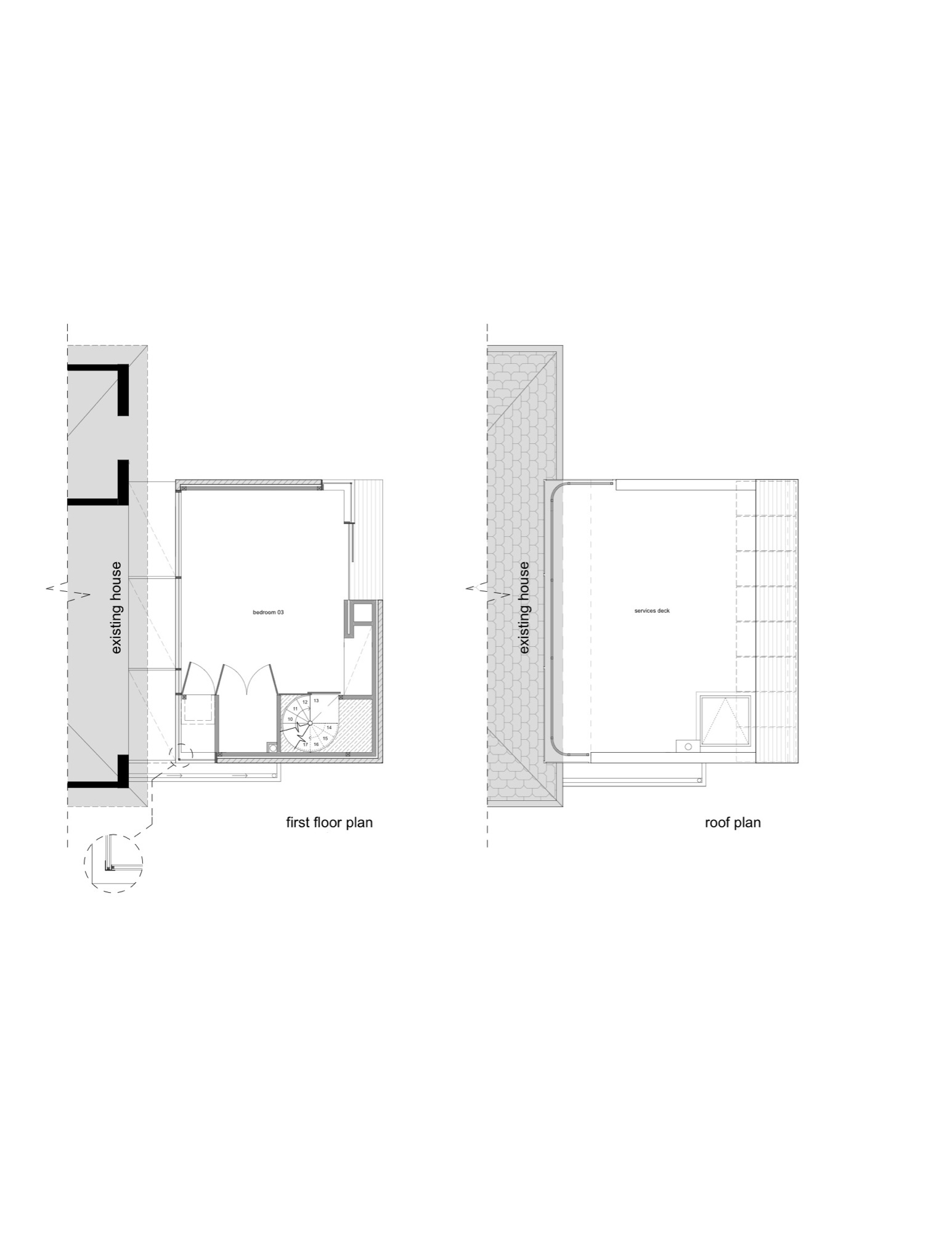 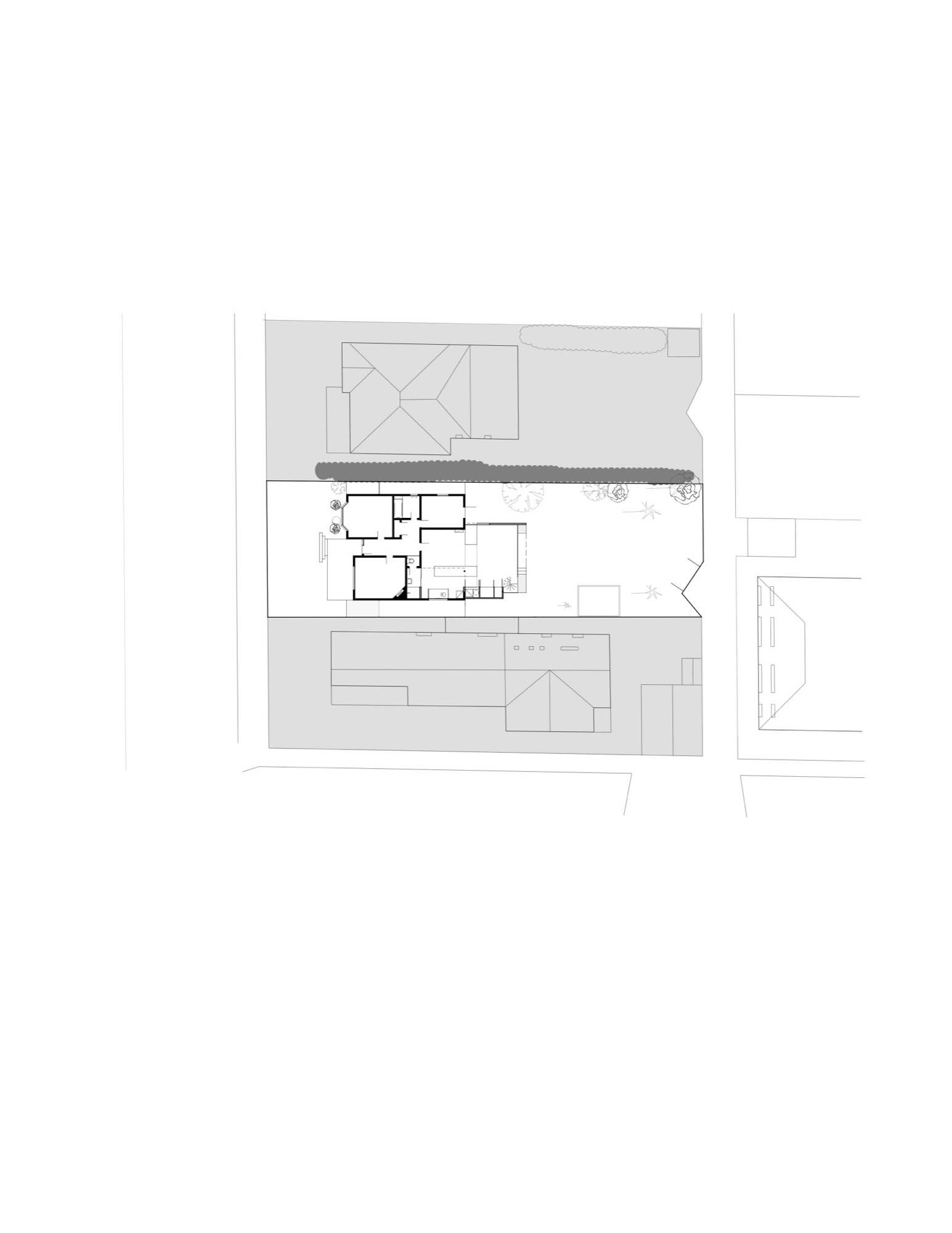 And like Andrew Maynard Architects' Tattoo House they decided to graffiti/tattoo/stencil their new creation before anyone else got a chance. Ilma Grove House is a stunning example of how a modest extension with stellar sustainability credentials can transform the efficiency of heritage homes creating not just a more liveable environment, but a delightful environment.