On the road from sprawling Los Angeles to the urban oasis of Las Vegas, you pass through miles upon miles of desert. It's barren.

But it's also an inspiring landscape. In its own way... Cactusy.

Prior to experiencing its beauty, I would have considered anyone who wanted to build a house in this isolated desert... well, mad. Actually, considering the temperature ranges from zero to 40+, I still think the owners of this desert-bound glass fishbowl are kind of mad. But a good, Nutty Professor kind of mad, not an 'it rubs the lotion on its skin' kind of mad... 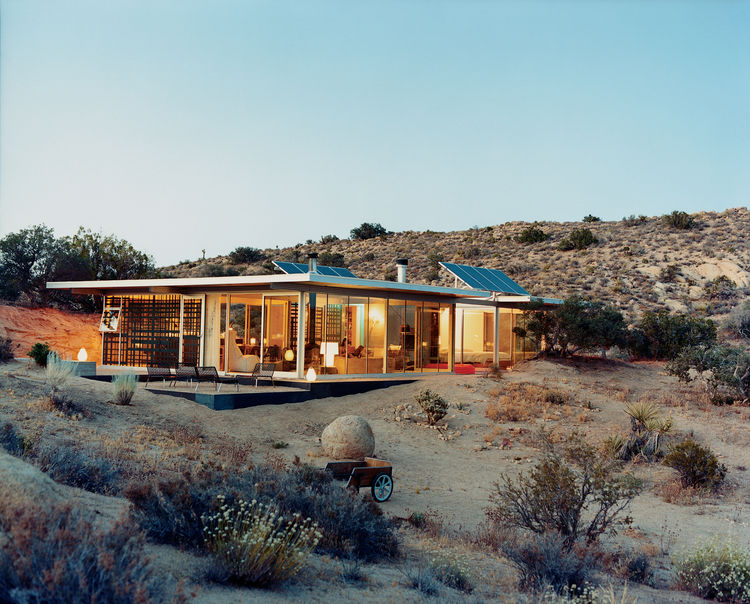 Let's be honest. The middle of the desert is not the place most of us would choose to live. First up there's the isolation. Where do you go to get a bottle of milk? And with wild extremes of weather from almost zero over winter nights to above 40 degrees in the summer heat? Well most of us would be running for the Hollywood Hills about now.

And yet this beautiful glass box embraces this hostile, yet stunning environment. In fact, iT House doesn't even have air-conditioning. Now that's brave. Or stupid? 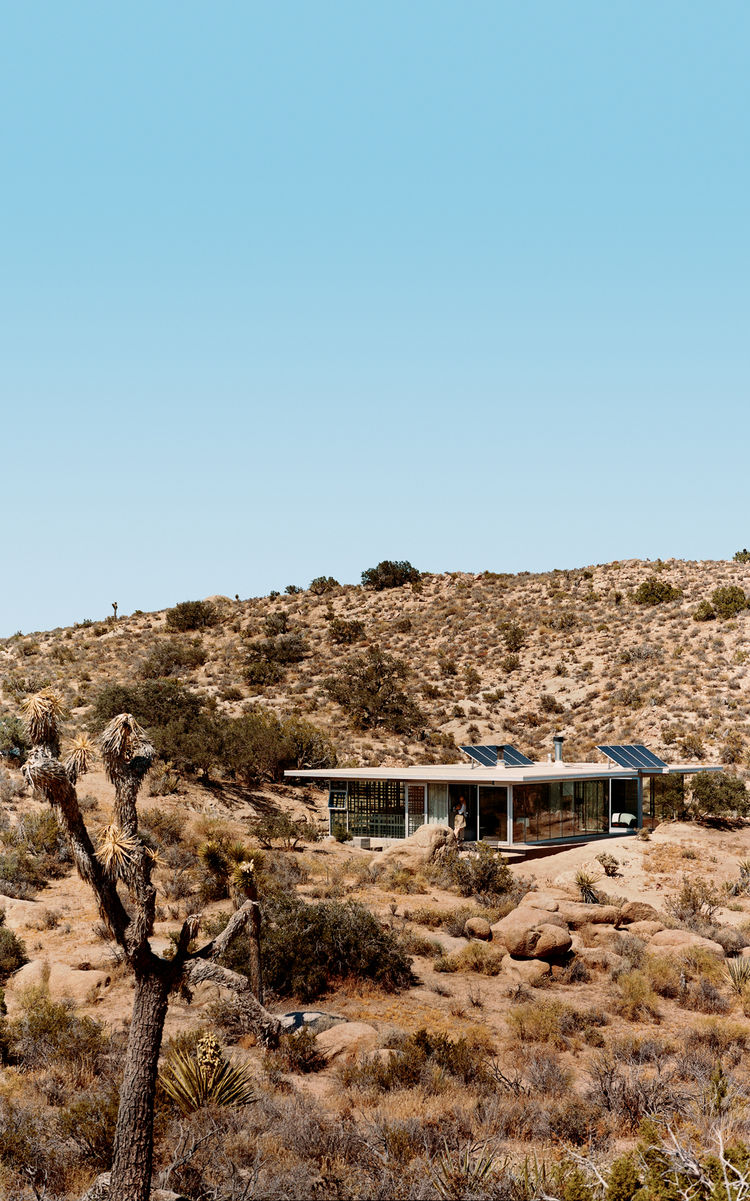 Linda Taalman and Alan Koch, of Taalman Koch Architects built iT House near Joshua Tree National Park East of Los Angeles. The simple home made of prefabricated parts was constructed by the architects and their friends over many weekends away from LA. The process tested the couples' ideas about design and construction. And no doubt their patience.

Now they have a range of iT Houses available for customisation on any site. You can learn more about that here. 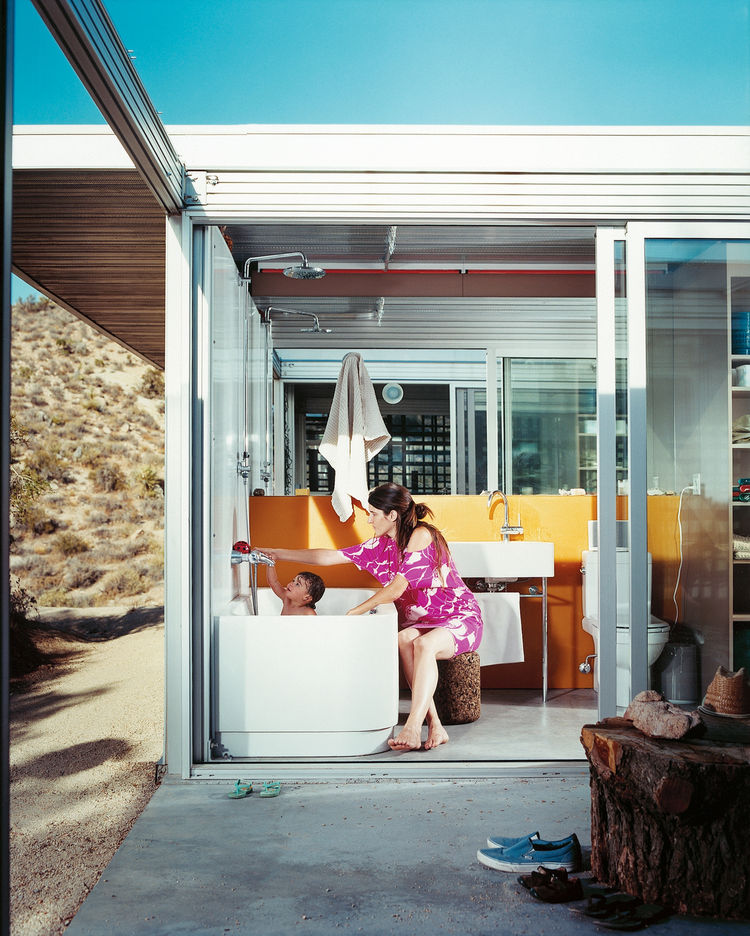 The reason for choosing to build in the middle of the desert had a lot to do with costs - sites in LA were just too expensive for the couple, but Linda had a slightly out-of-the-box solution, “We’d been going out to Joshua Tree for a long time, and there was something about that place that kept drawing us back.” And just out of Pioneertown (onetime set for Westerns that has developed into a town in its own right), amongst desert scrub, spiky cacti and the odd Joshua tree, they found five acres of land to call their own.

Initially they planned to use the glass walls of iT House as a canvas for artists to apply graphics, but because the rolling desert proved so naturally beautiful they limited this technique to just a small part of the home. 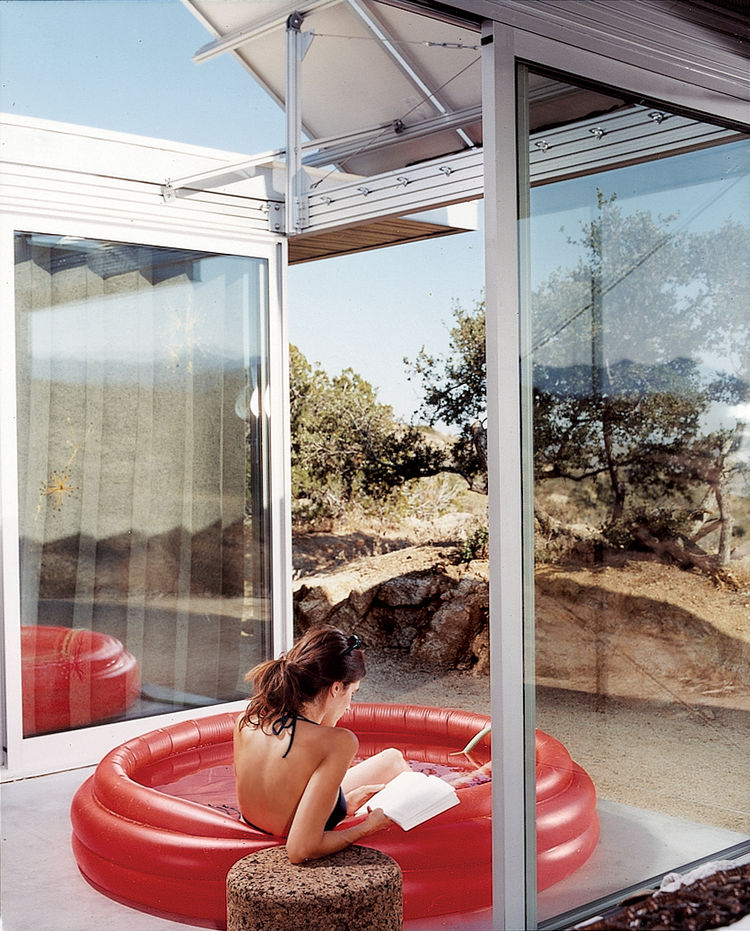 The design brings together materials and techniques from "industries outside of the traditional domestic building environment. The iT House is a collection of off-the-shelf manufacturing systems that we’ve combined—like the Bosch framing usually used in robotics and the Epic roof construction system used in airports and malls." 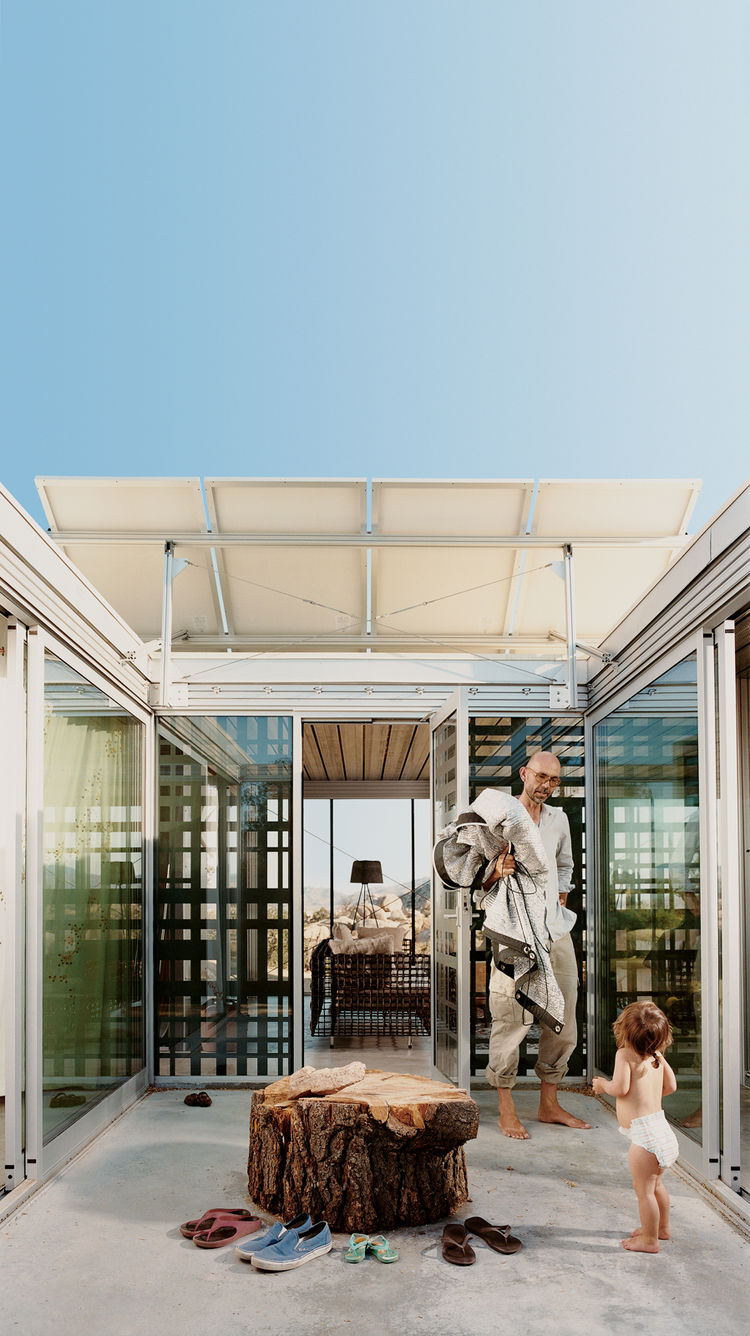 In spite of being made of prefabricated components, the couple weren't interested in complete prefabrication, “We are not looking to crack the nut of making a cheap, affordable, mass-produced home product,” Linda says. “We’re looking to make buildings that have merit but that don’t rely on a single contractor and that enable us to take control over the process. We can then specify the drawings and get a high-quality product rapidly assembled on site.” 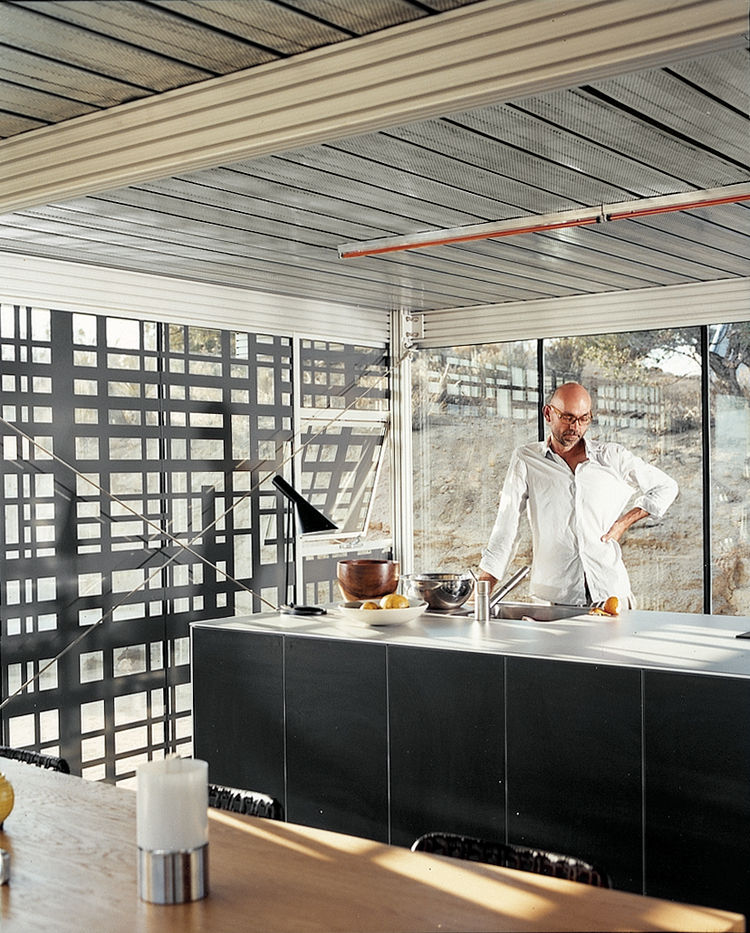 How does iT House differ from Philip Johnson's House in Connecticut? It embraces, rather than recoiling from the environment. Johnson's glass house was hermetically sealed and artificially air-conditioned. There's barely a wall or window that doesn't slide and open to the outdoors at iT House. Alan likens it to a yacht, it functions “like a sailboat. You’ve got to work the house to make it respond. In the summer, which is very extreme, you close all the east-facing doors in the morning and you open up the west—and then you flip it in the afternoon.” 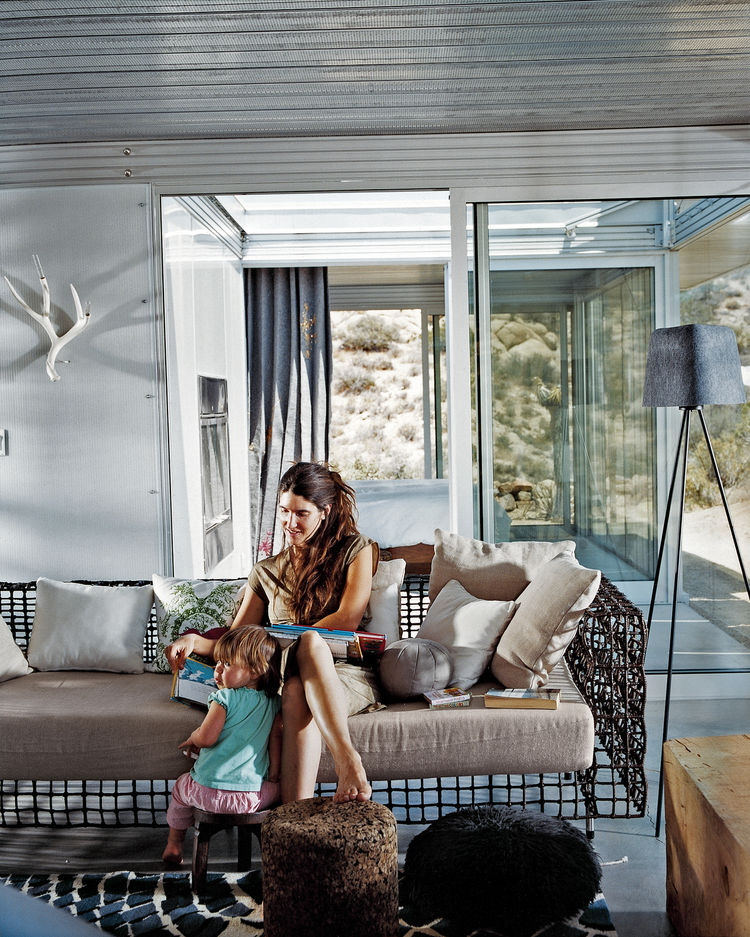 And of course to make a house like this work in the high desert requires passive heating and cooling strategies. All glass elements use Solar Ban 60 glass, which is coated with a low-e coating to help block long-wave radiation. The roof blocks a good amount of summer sun, while still letting in the winter rays. And the couple harness the sun to generates hot water and electricity. 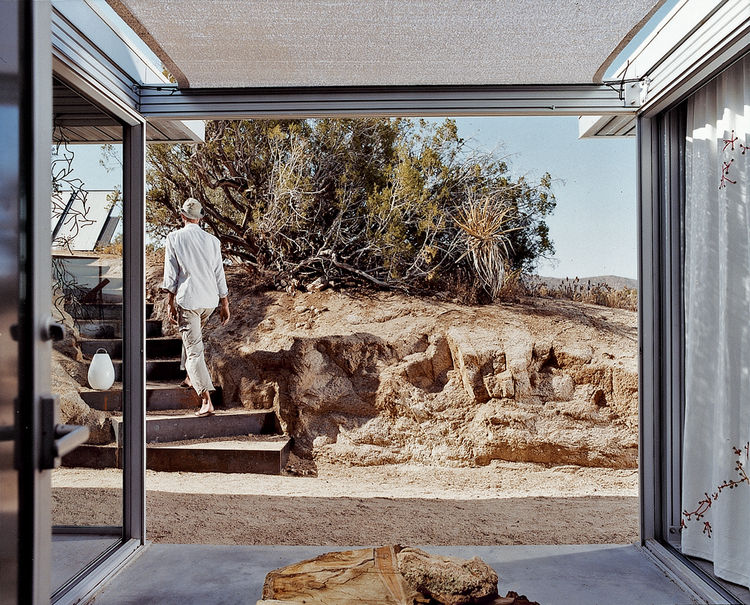 Maybe they're not so mad after all...

Why not spend a relaxing night or two here? It's available for rent on AirBnB!