The site of McKenzie House by AtelierWorkshop is part of an apple tree orchard laid in rows on a 4x3 meter grid on the plains of Hawkes Bay, New Zealand. A long access route to the property provides a sense of isolation from all neighbouring properties. 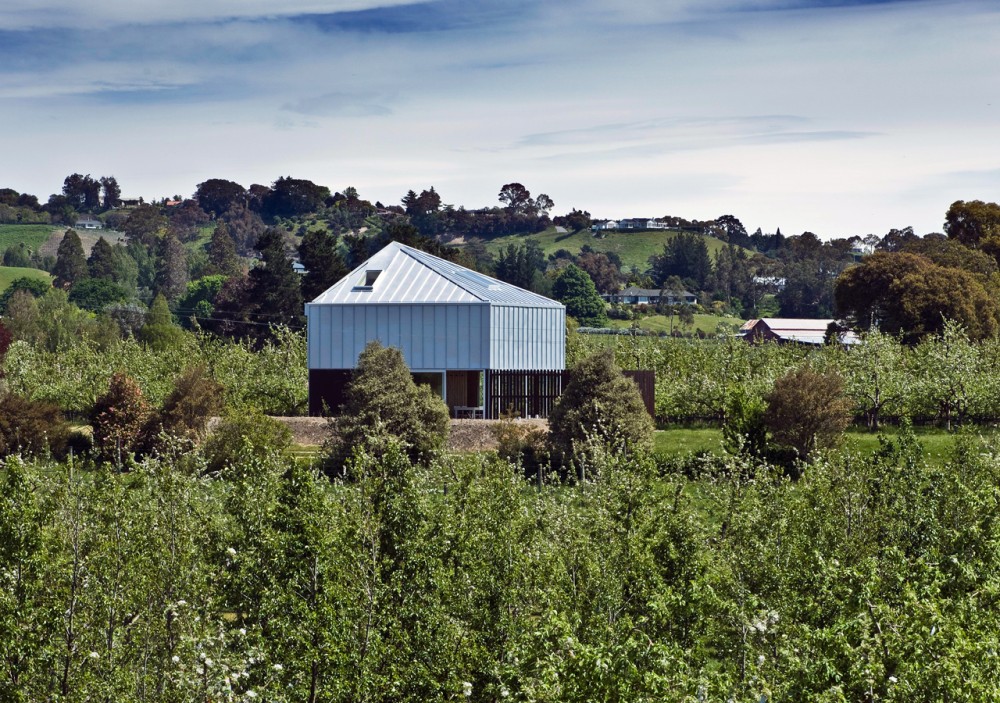 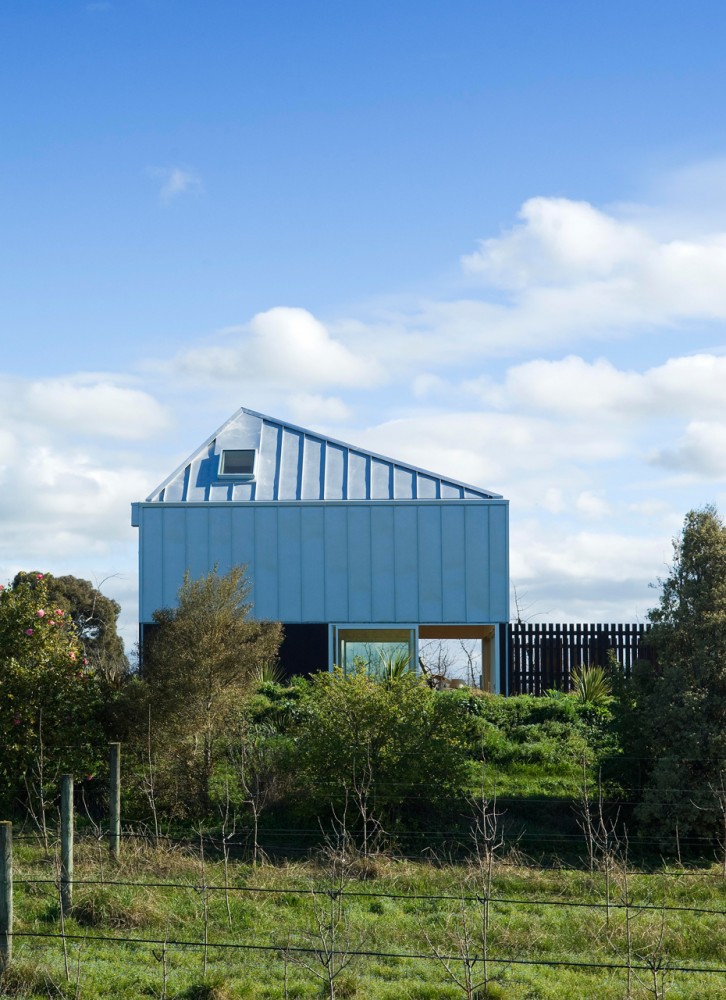 A gentle slope on the eastern side leads down to the riverbank of the Tukituki River, this orientation also takes in the lane that leads to the existing John Scott house. Above the level of the trees there are extensive views-to Te Mata peak, the valley of the Tukituki river and the distant Tararua ranges. 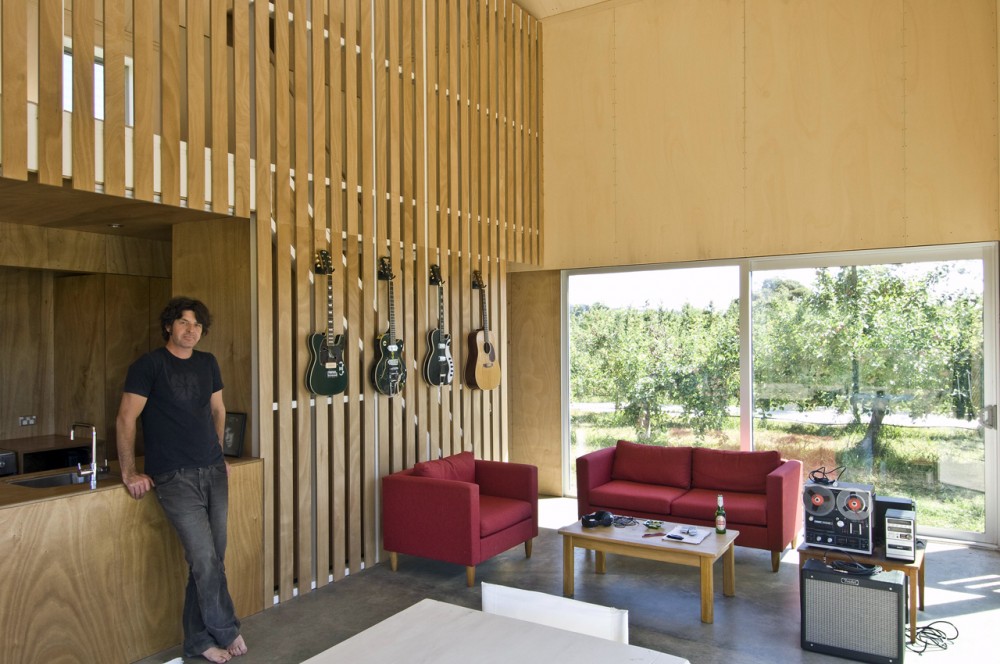 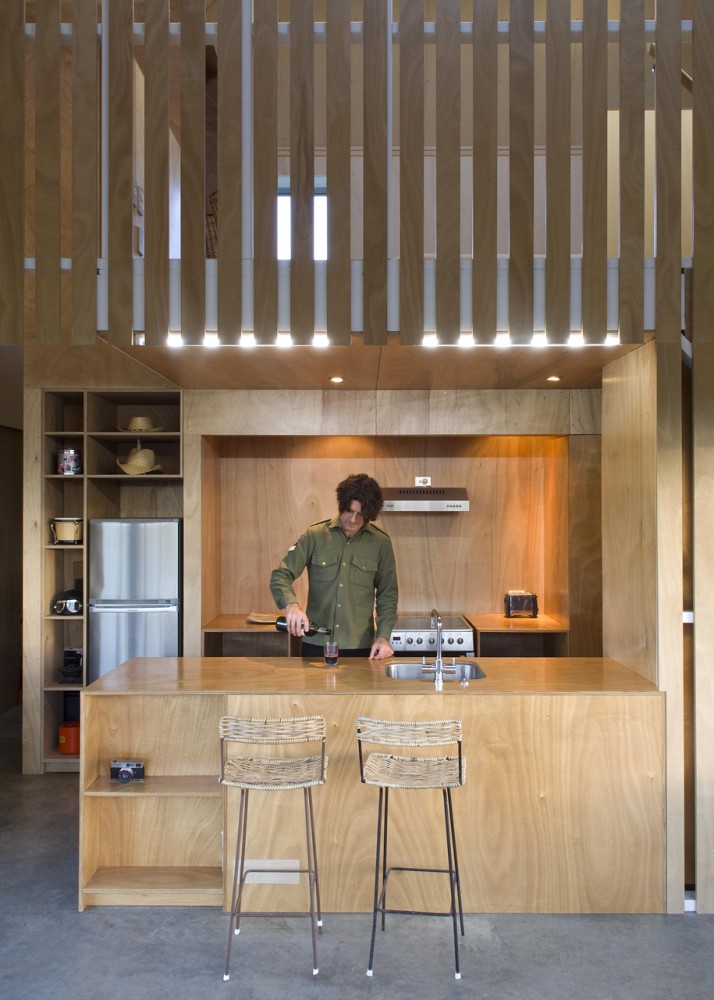 "Our aim was to insert the new house into the orchard thereby providing a sense of isolation from the existing house and giving the feeling of being nestled within the apple orchard. We aimed to contrast this sensation with the feeling of looking over the trees, providing spaces that sit in the canopy of the trees and take in the larger landscape that is unique to Hawkes Bay." — AtelierWorkshop 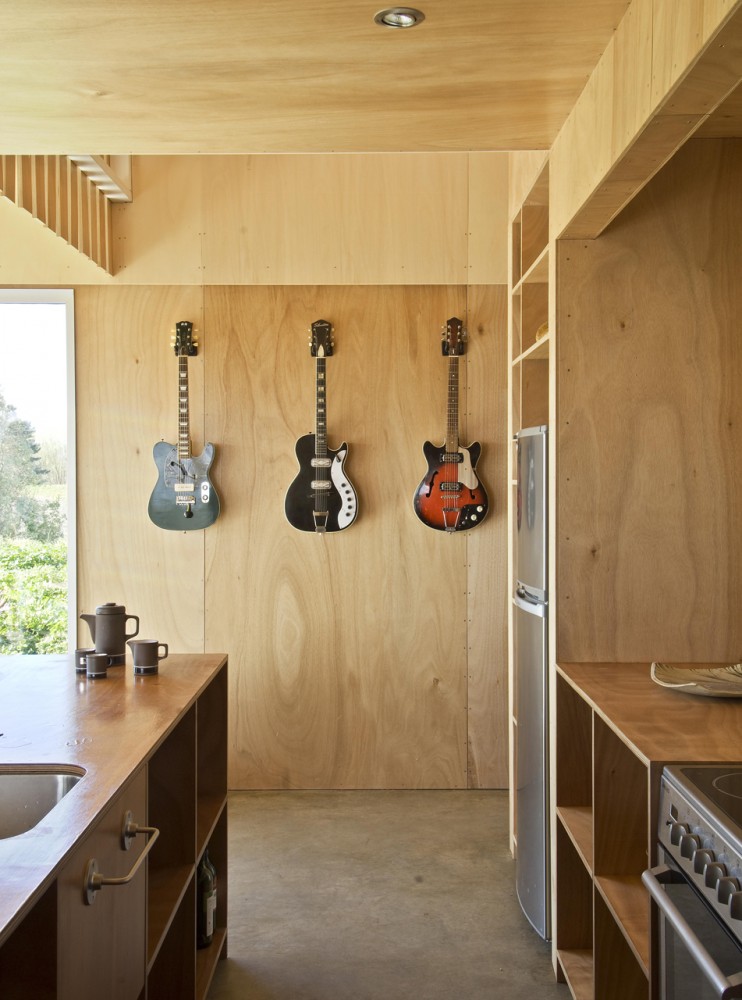 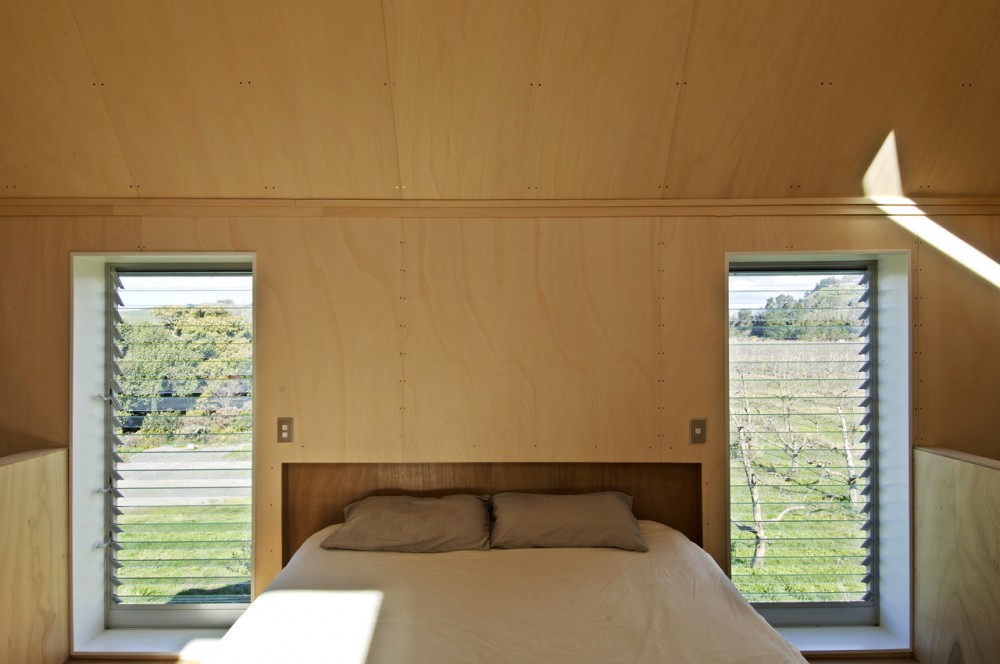 Responding to the Existing House

Another priority was to create a house that responded to and acknowledged the existing John Scott designed house: simple volumes juxtaposed and connected to capture the best views and orientation: the volumes are pushed out from a centre. 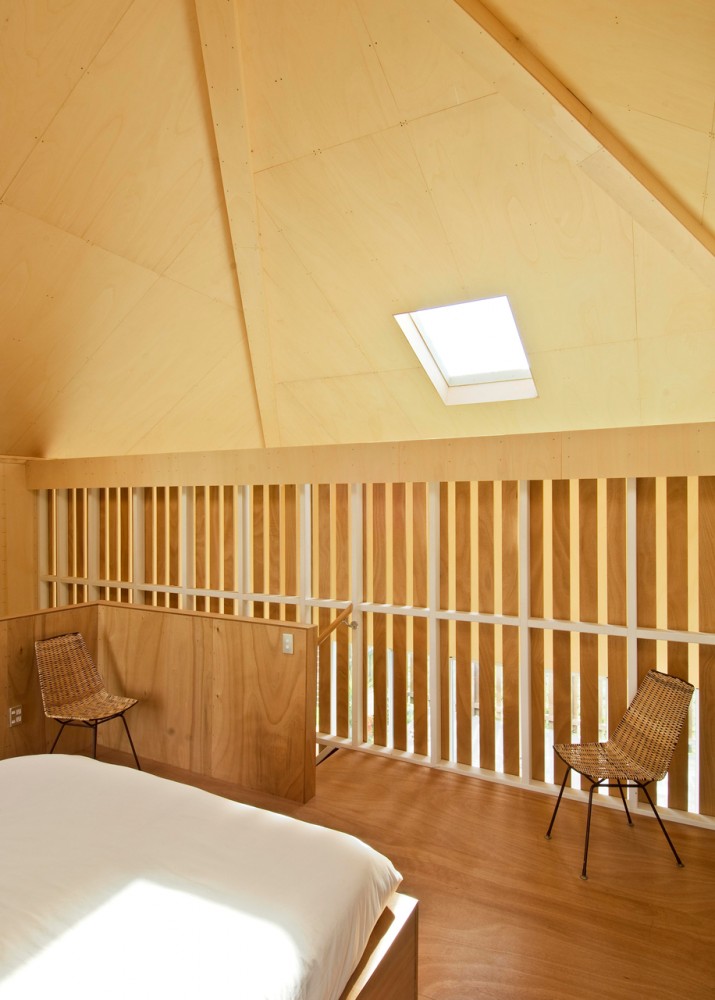 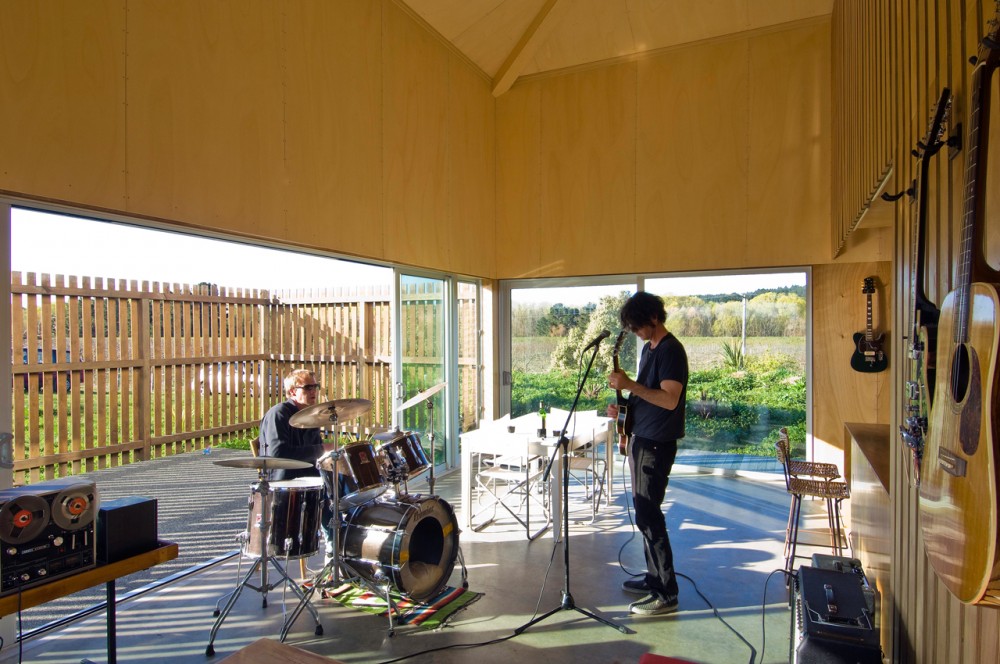 For these reasons, AtelierWorkshop designed the new building as a simple two level, compact, cubic volume reintroducing and abstracting the themes developed by John Scott.

"Our choice was to create a volume that combined at the same time the introverted effect and the outward looking. The introverted sensation was be developed through the ground floor level of the house by being part of the grid of the surrounding orchard." 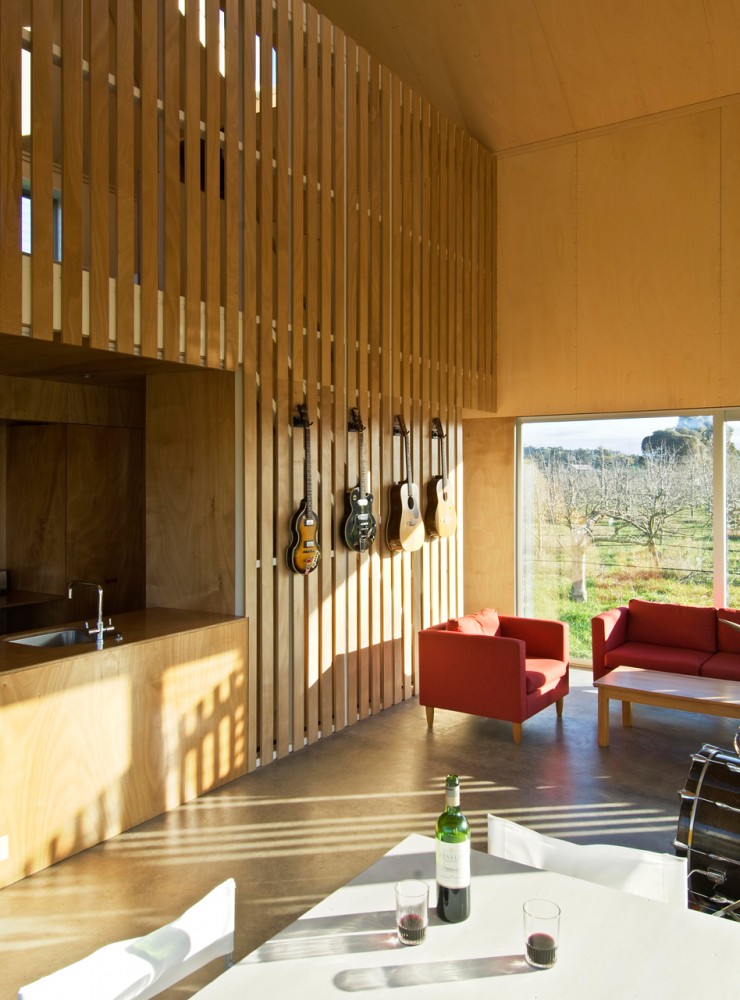 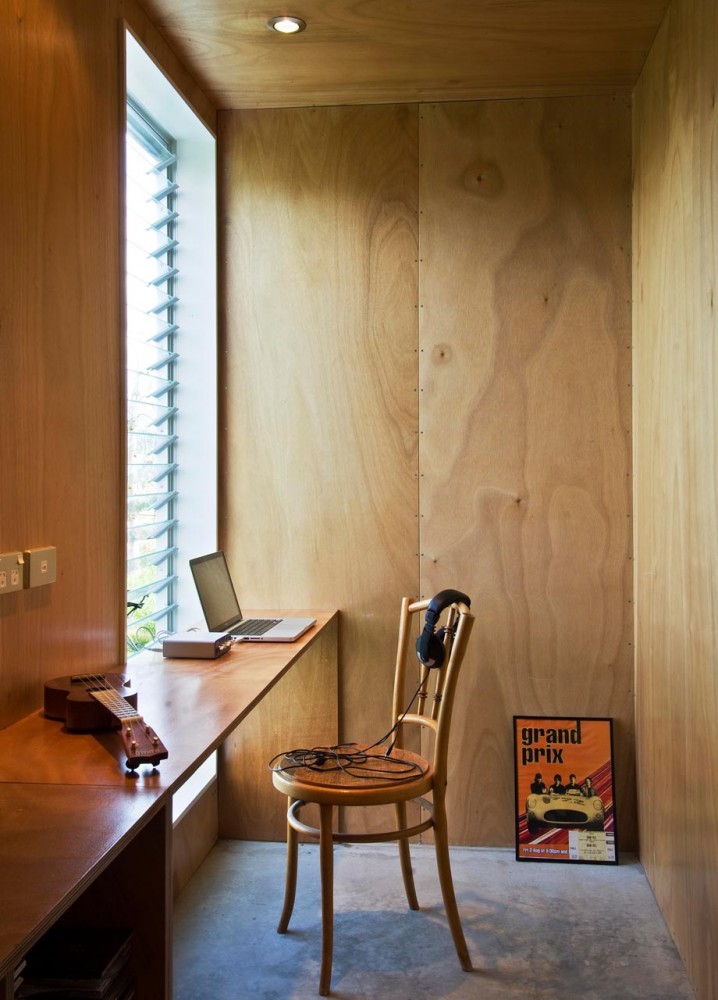 The upper level contains the bedroom and provides a relaxing area where the distant views can be enjoyed from within the canopy of the orchard. 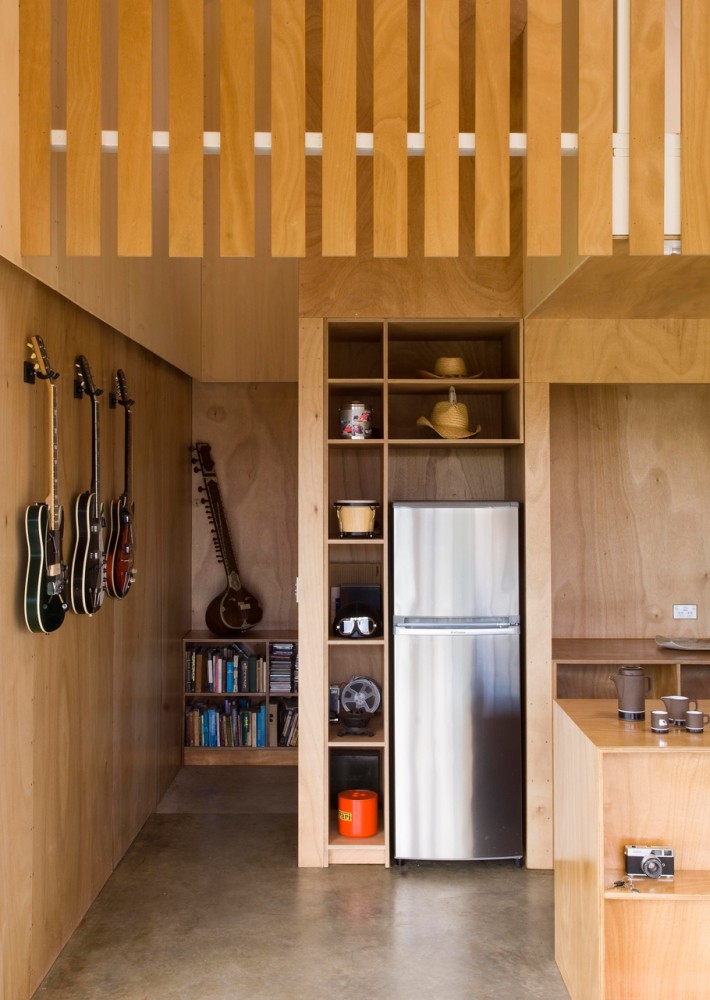 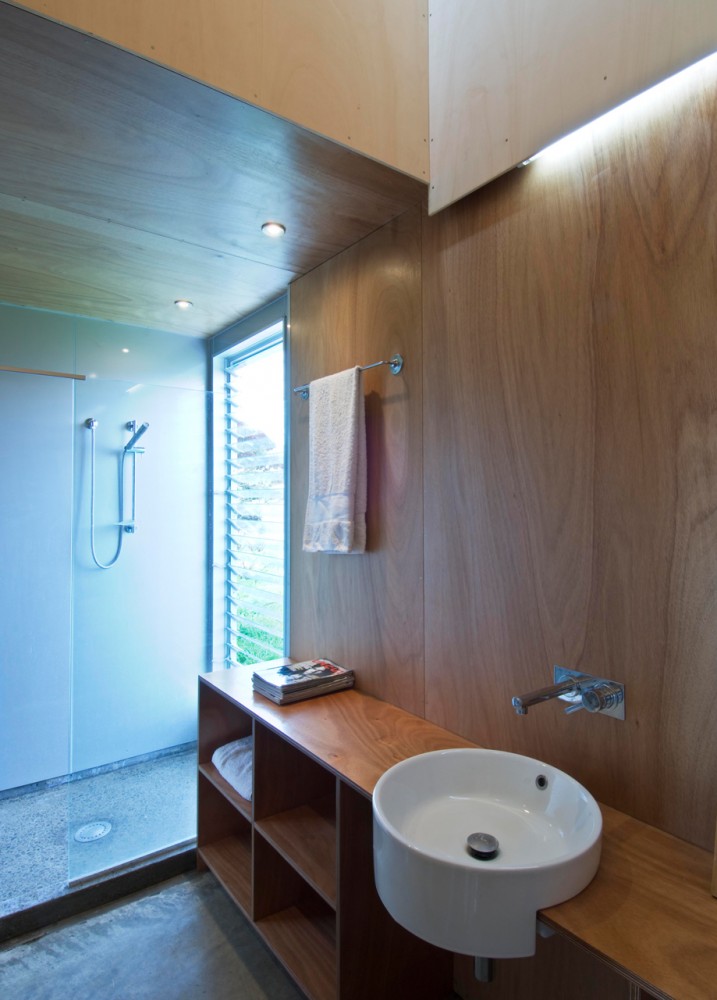 A simple pallet of materials was used playing with the contrast of smooth and textured materials. 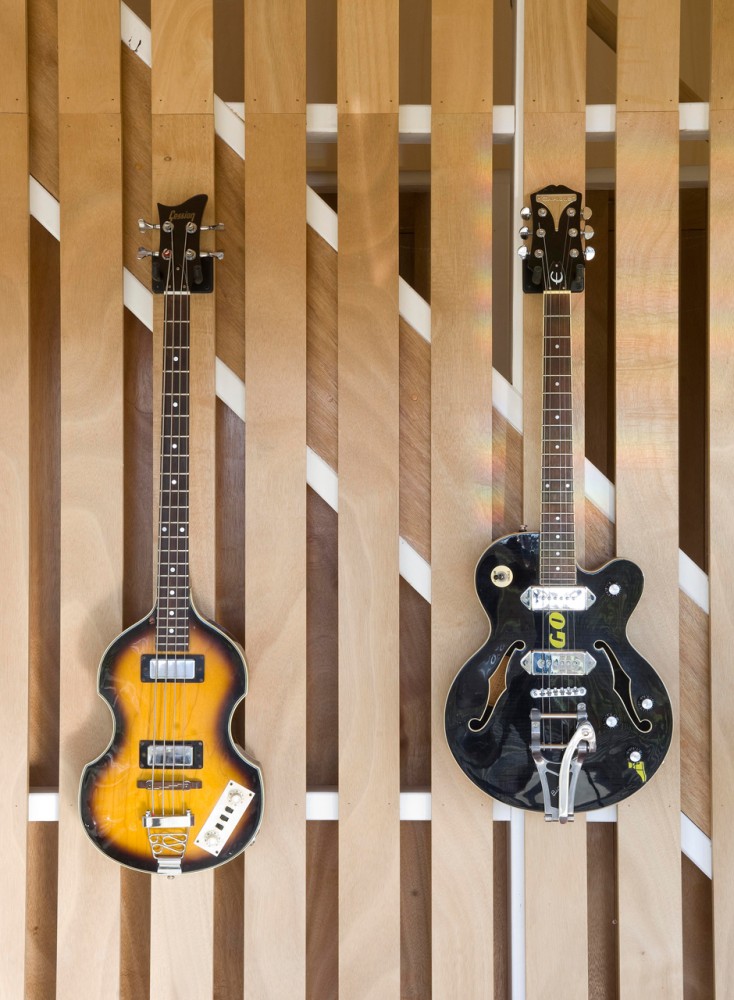 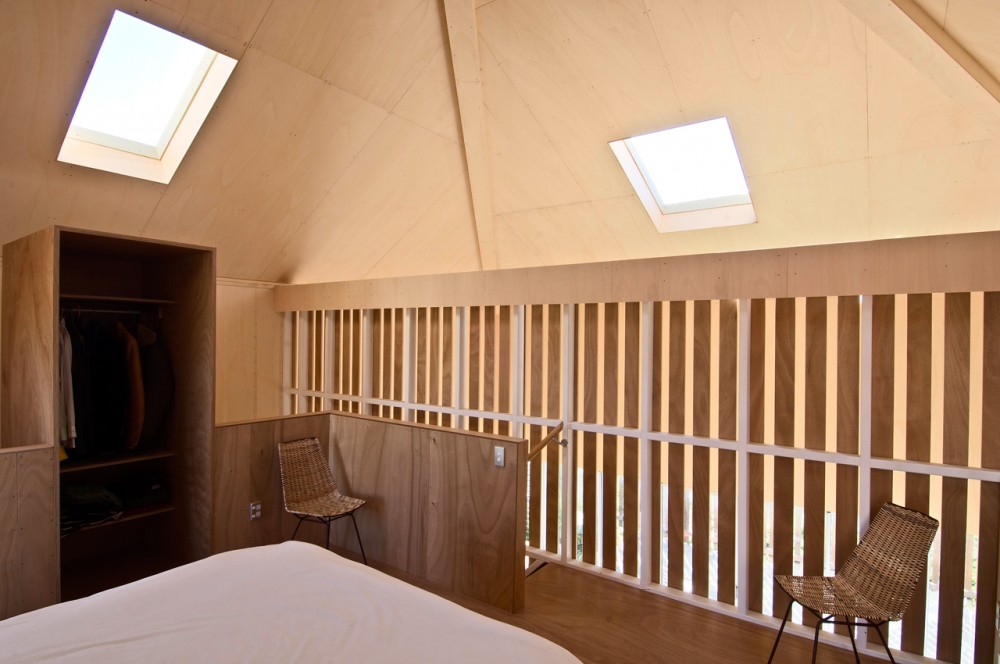 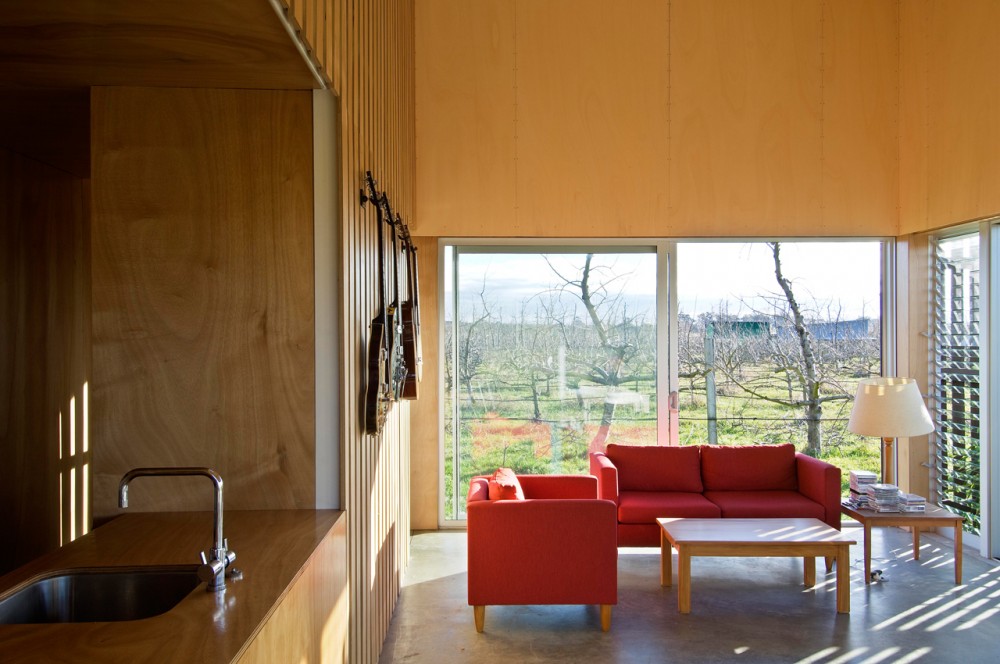 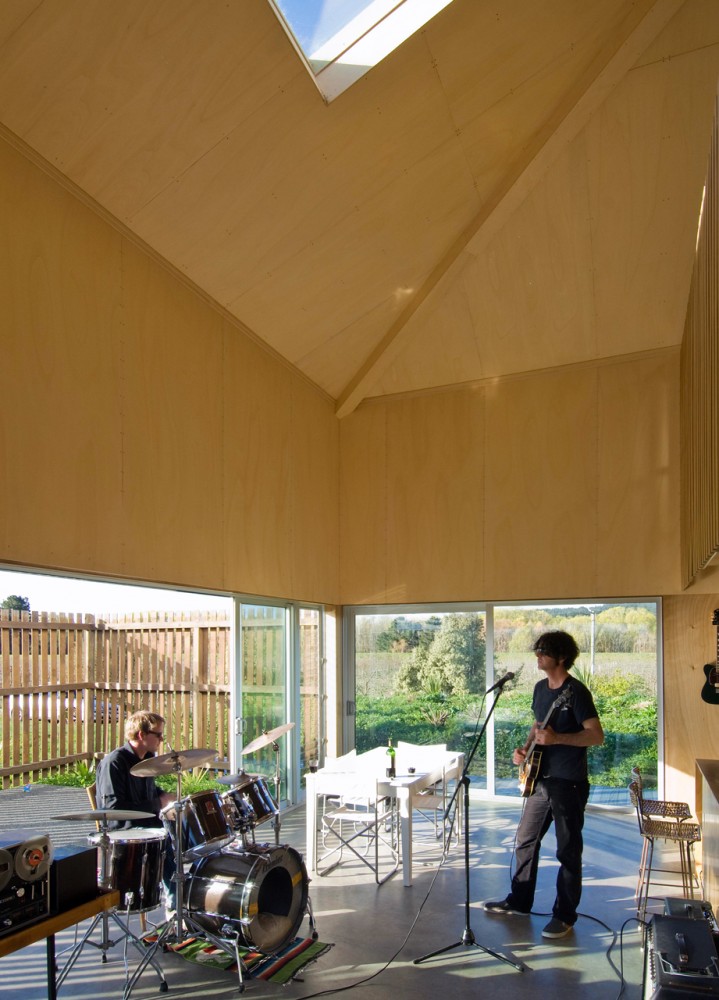 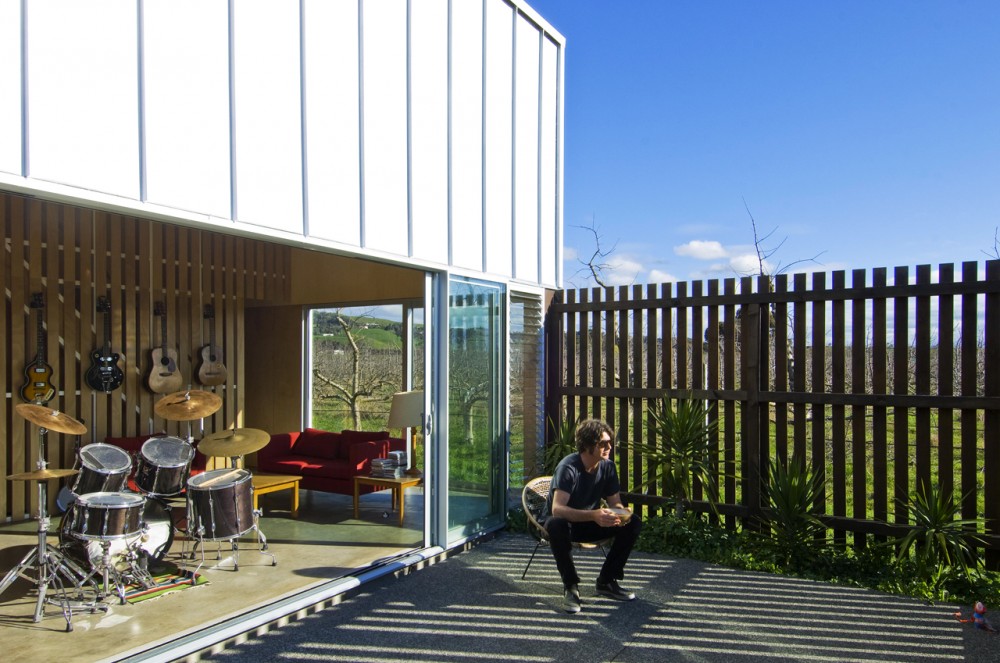 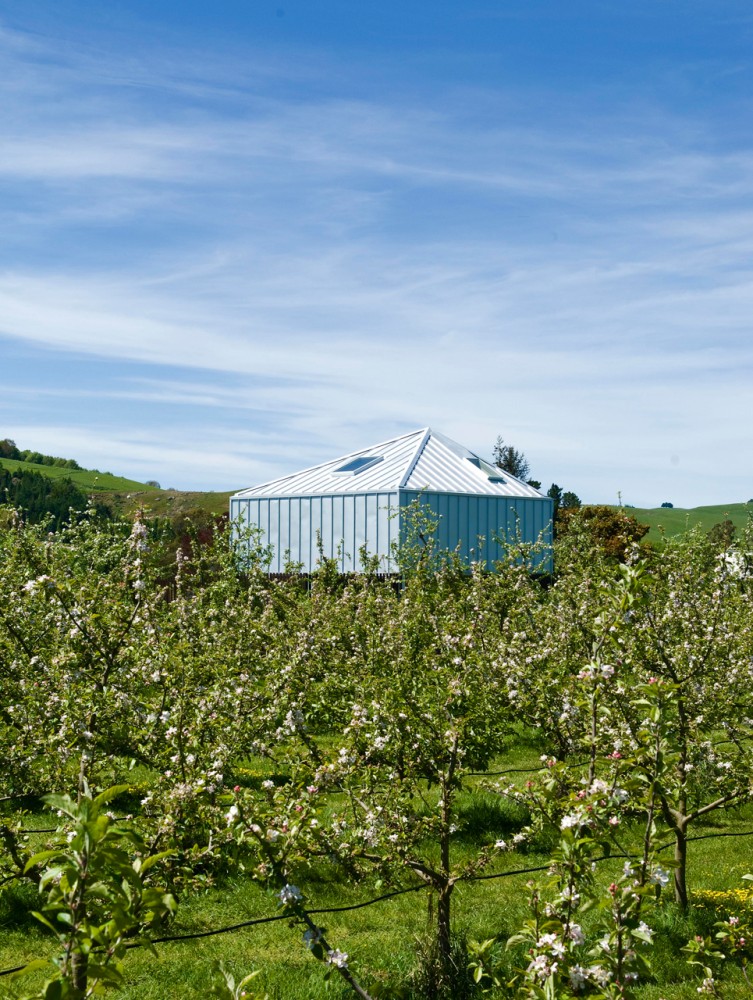 "We aimed to create a house that is low energy through the use of solar passive design principles while allowing for the possible installation of active systems at a later stage." 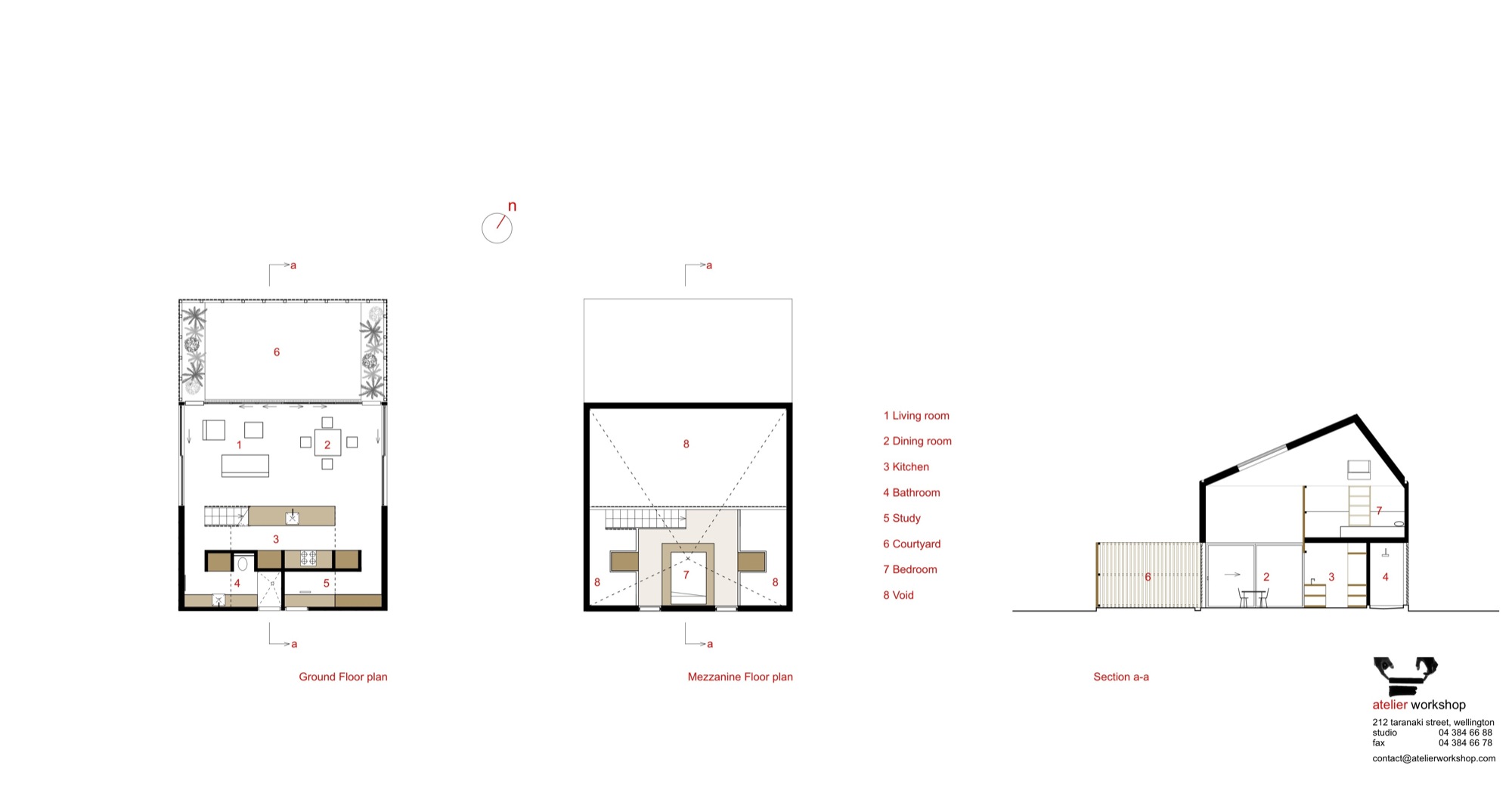