Marrying old and new leaves this renovation full of character

Older houses are filled with character and charm. This is largely thanks to the layers of history; the bumps in the old timber floors, the original detailing and even the retro tiles from a mid-century makeover. How do you add a brand new addition while retaining the quirks and layers of history that are so charming? 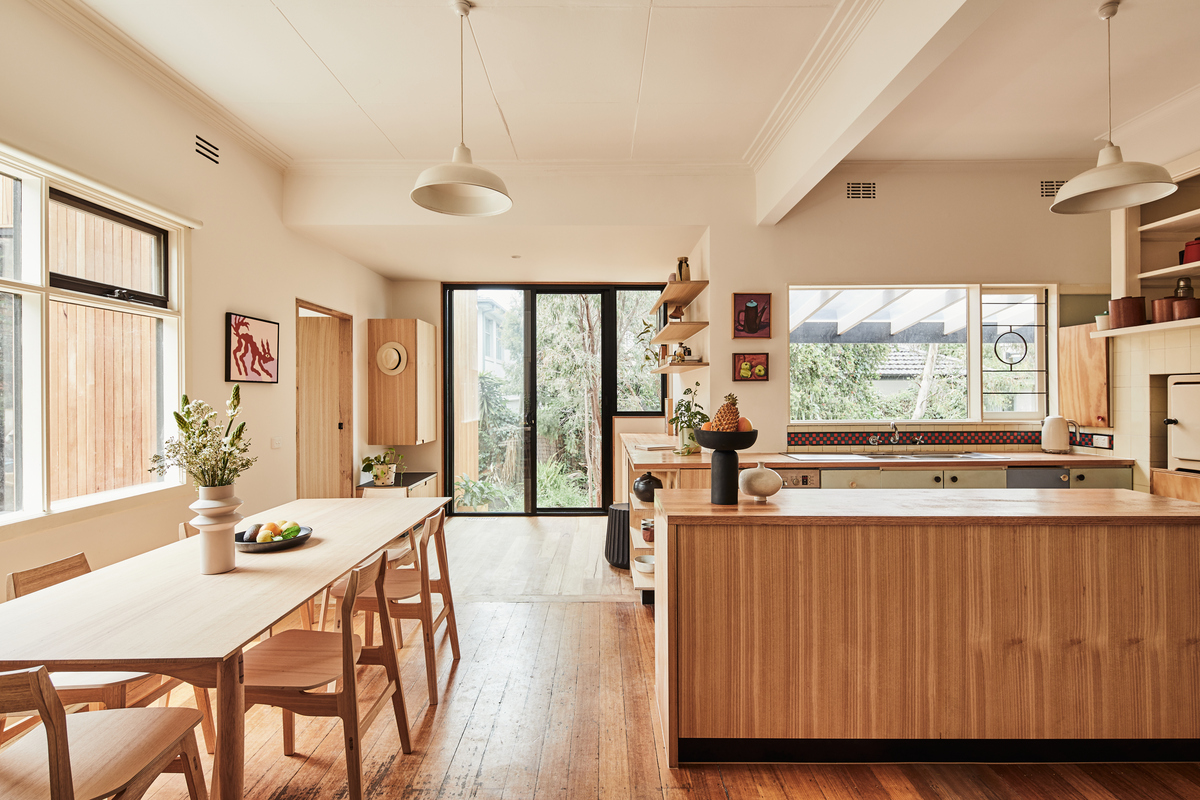 At Mischa's Place, a renovation in Seddon by Circle Studio Architects "it was an exercise of knitting together old and new, embracing the character of the existing house while opening up and breathing new life and light into the space." 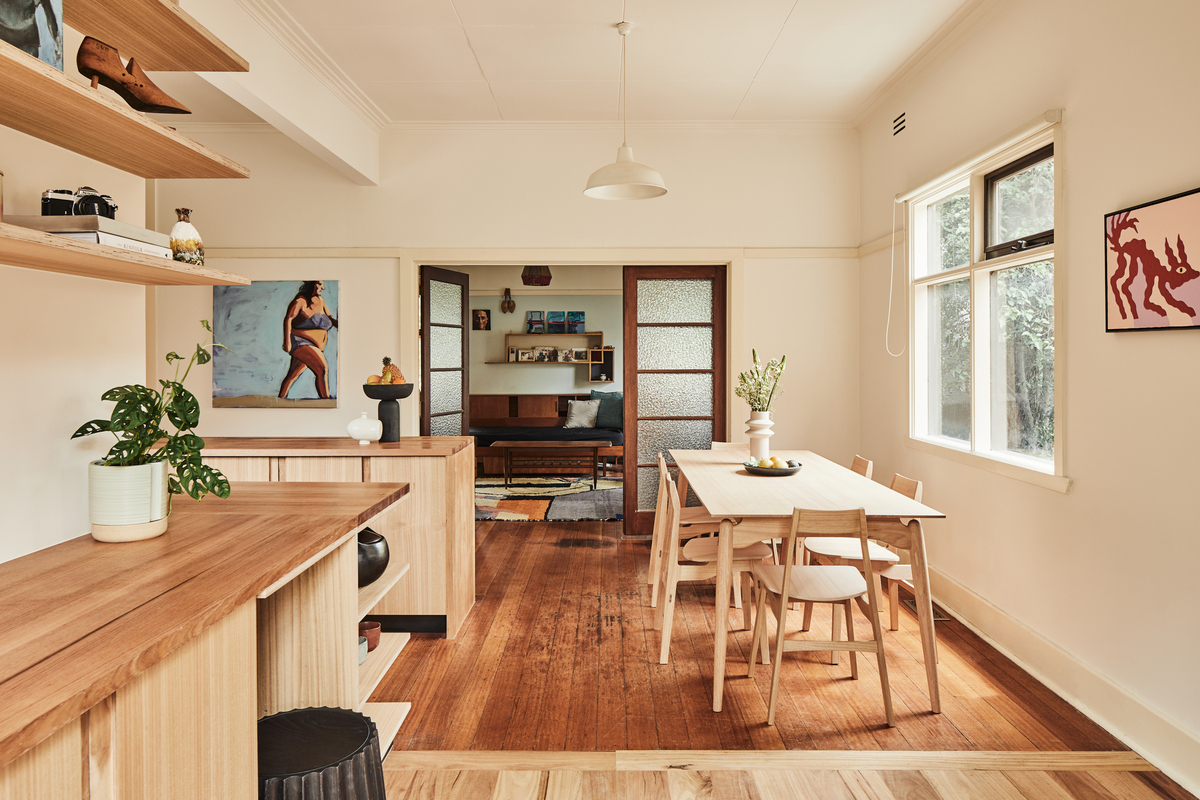 The original weatherboard cottage was brimming with personality and had clearly been much loved over the years. A previous renovation to the kitchen had come full circle in style and left the house with very desirable retro vibes. Instead of ripping out the tiles and cabinets, the architect worked with them. "In many renovations, elements such as retro tiles or cabinetry are often the first thing to go, in favour of newer, sleeker trends", explains the architect. "The old house was not completely lost, but integrated." 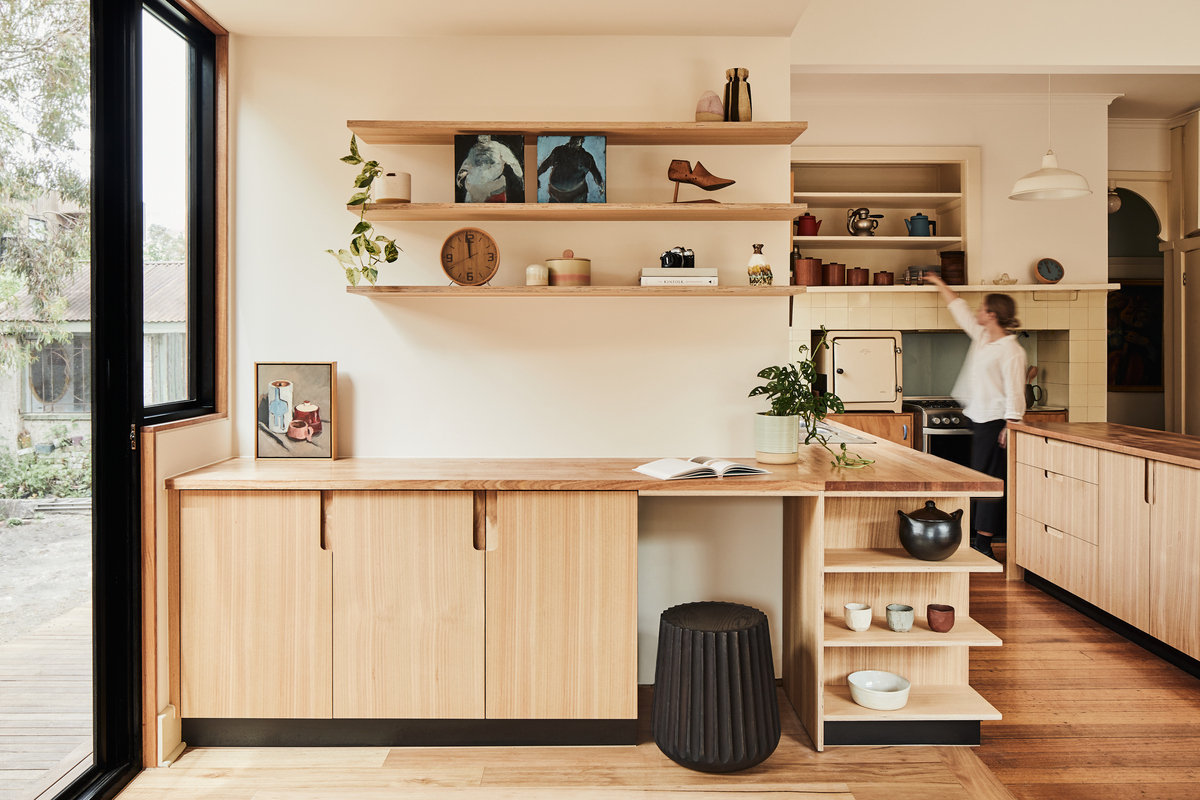 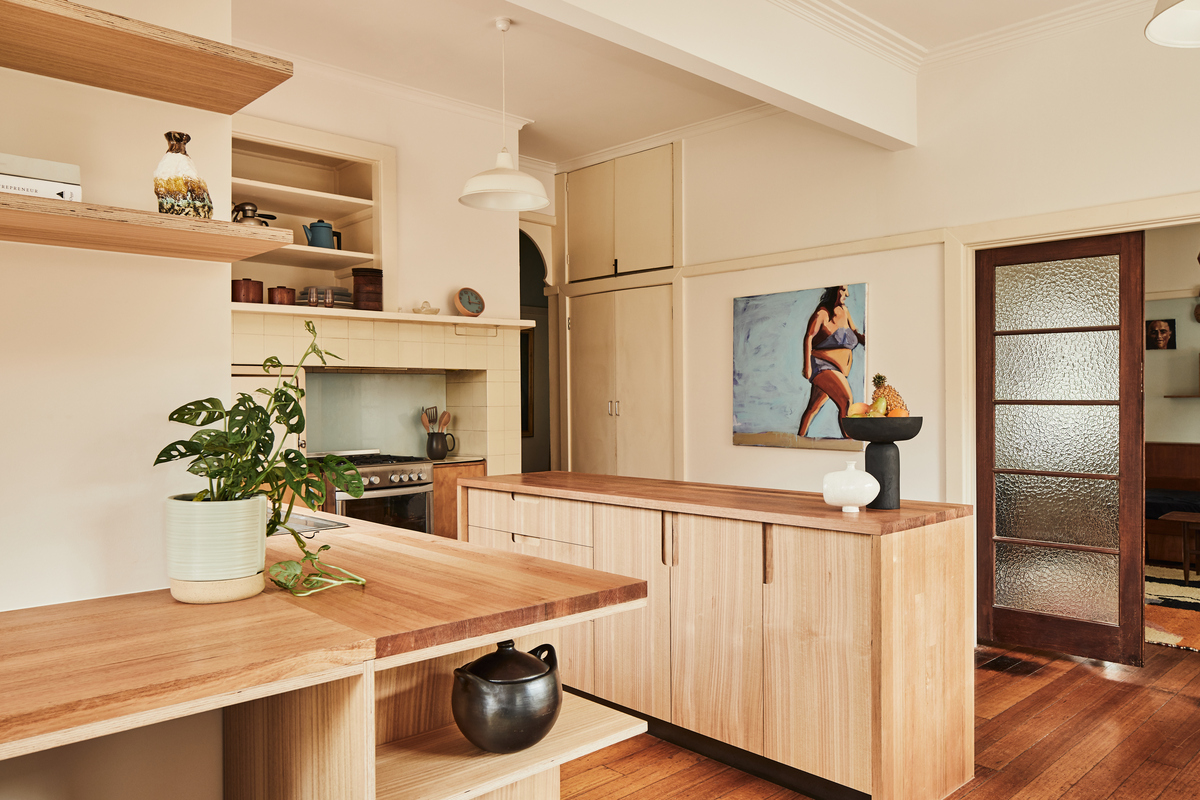 "The kitchen was originally closed off from the dining space", explains the architect. By removing an internal wall, the whole space now feels larger and is bathed in natural light. Better flow is also created between the inside and out. 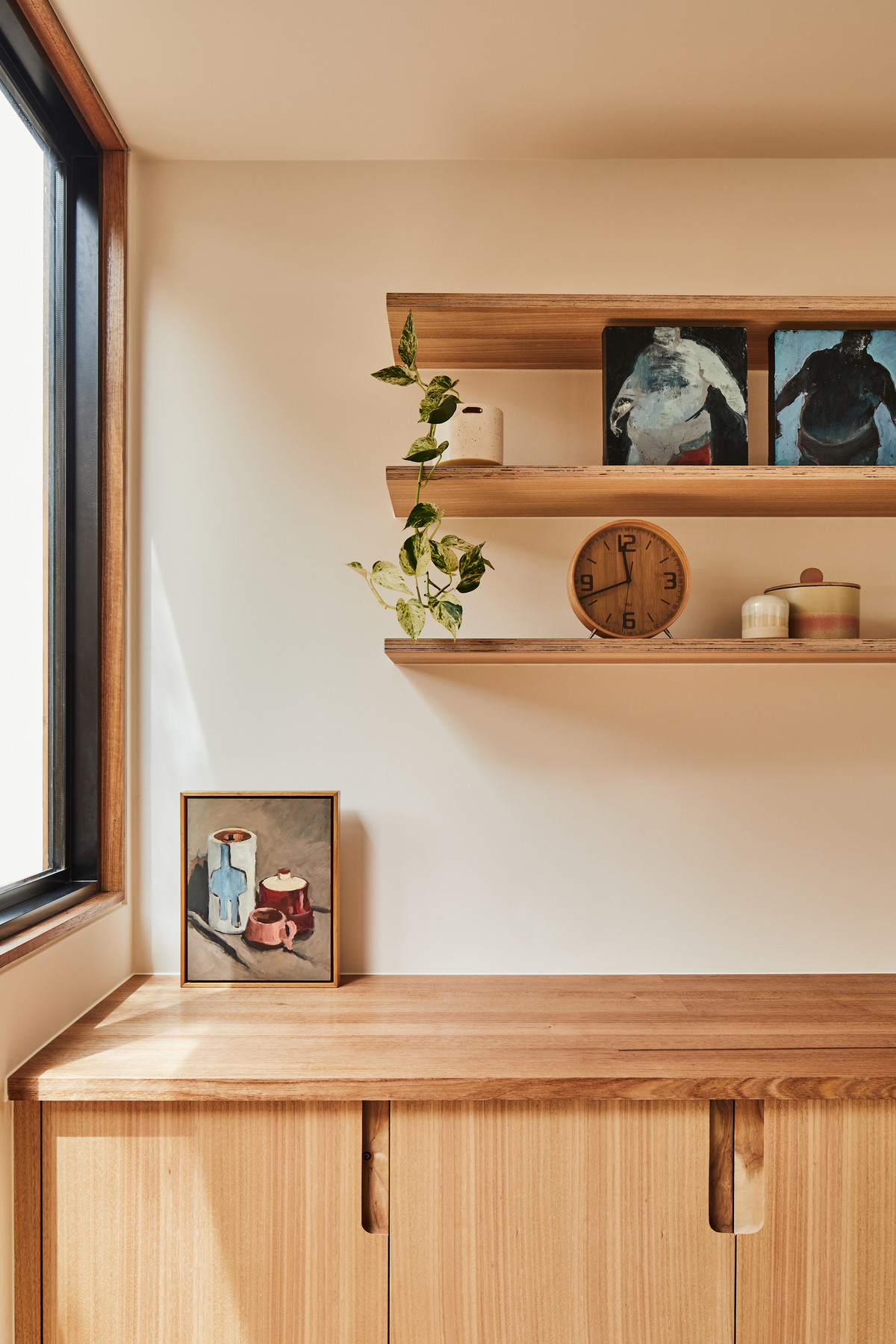 How did they cohesively combine old and new? Cabinetry is the stitch that binds the two together. "A long island bench was placed across the threshold of where the wall used to be", explains the architect. "This provides more storage space as well as lengthening the functional kitchen area." Similarly, parts of the old kitchen cabinetry have been retained, while a new benchtop unifies it as a whole. Old and new floors are also clearly defined, adding another visible layer to the home's history, rather than trying to whitewash it. "Moving from the kitchen through to the rear is like transitioning through a gradient of old to new." 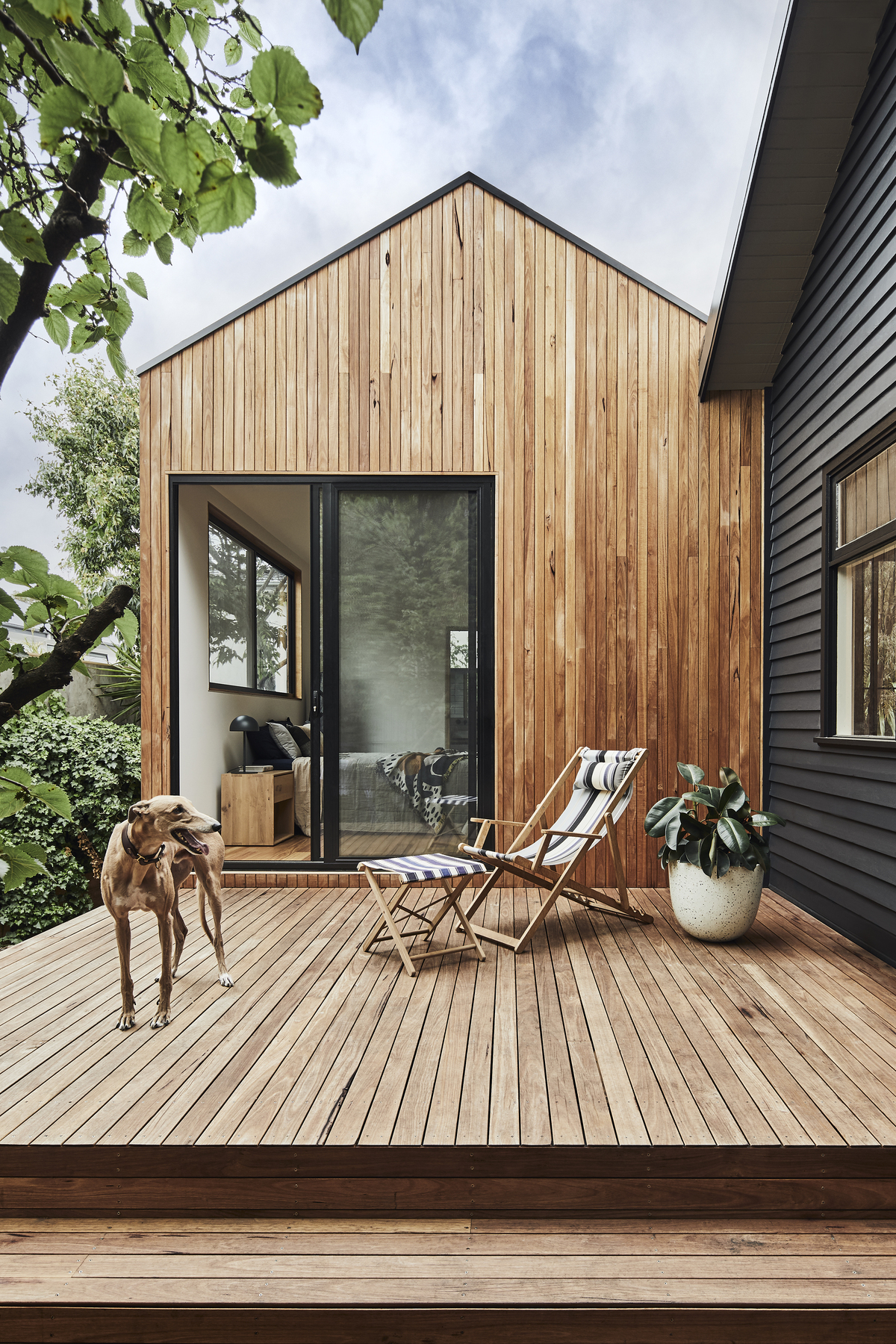 An addition contains a new main bedroom and ensuite bathroom; a private retreat for the owner. This was designed to have minimal impact on the existing home, without compromising on the access to light or encroaching too much on the garden. A simple gabled box is the solution; sitting alongside the original cottage with its own distinct personality. While it is connected to the existing house via an internal door, you might be more inclined to use the sunny deck connecting the two, a good excuse to soak up the garden (and some vitamin D while you're at it). 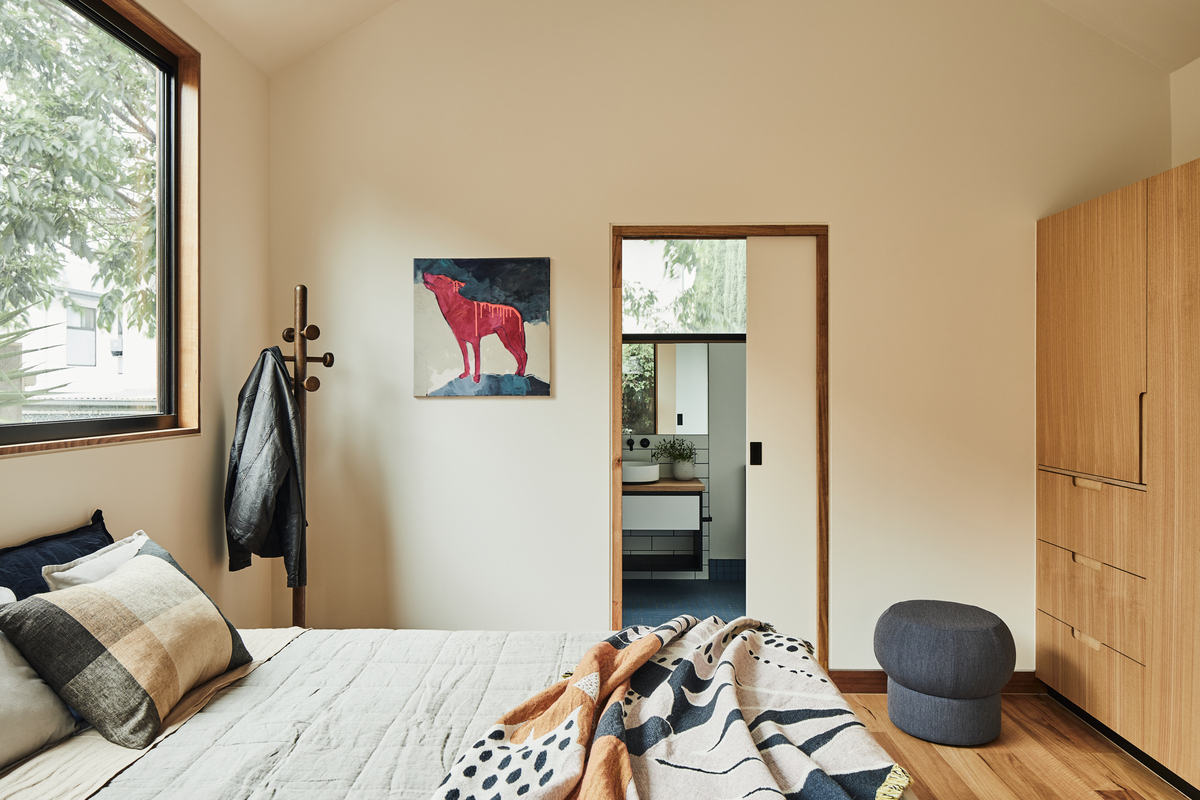 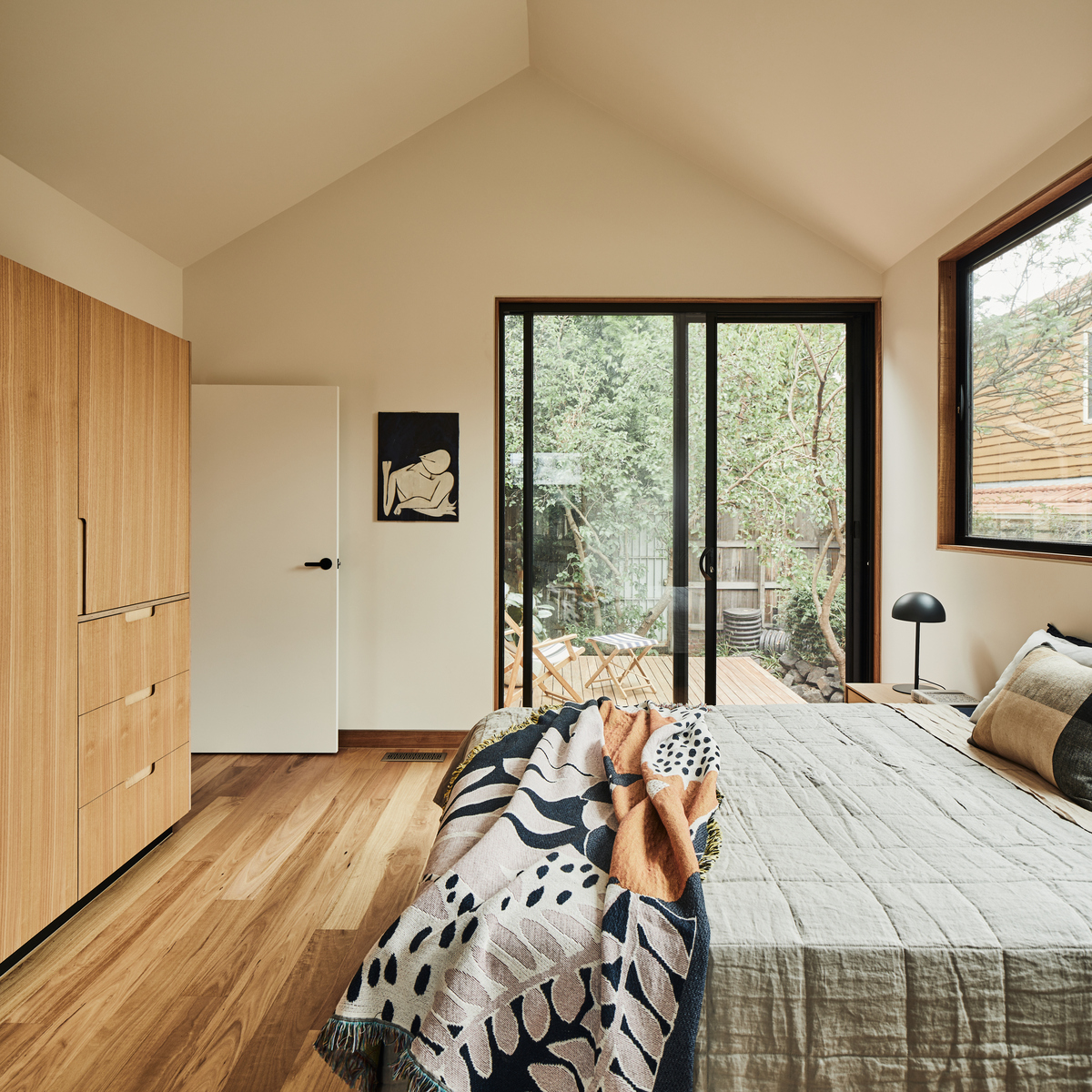 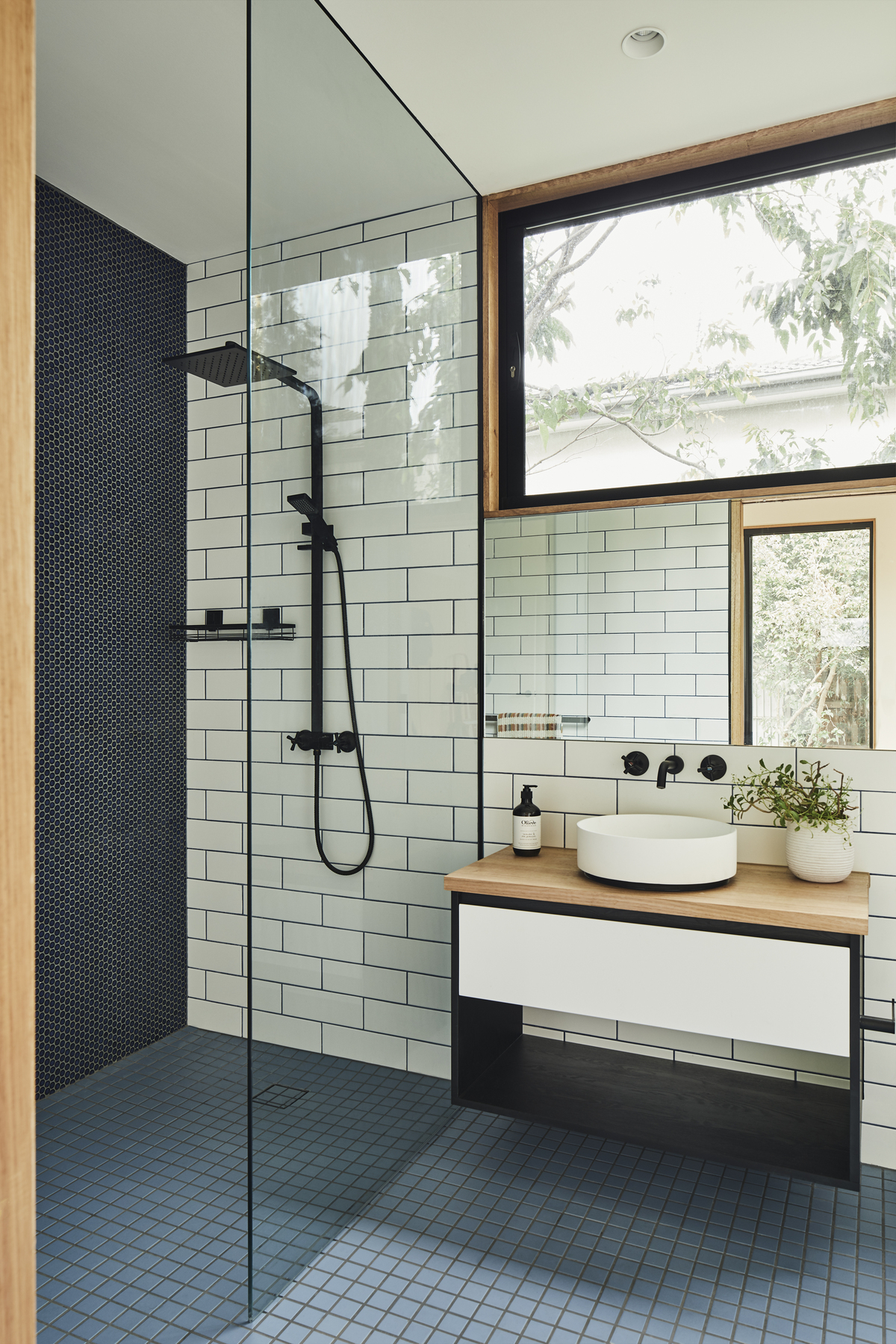 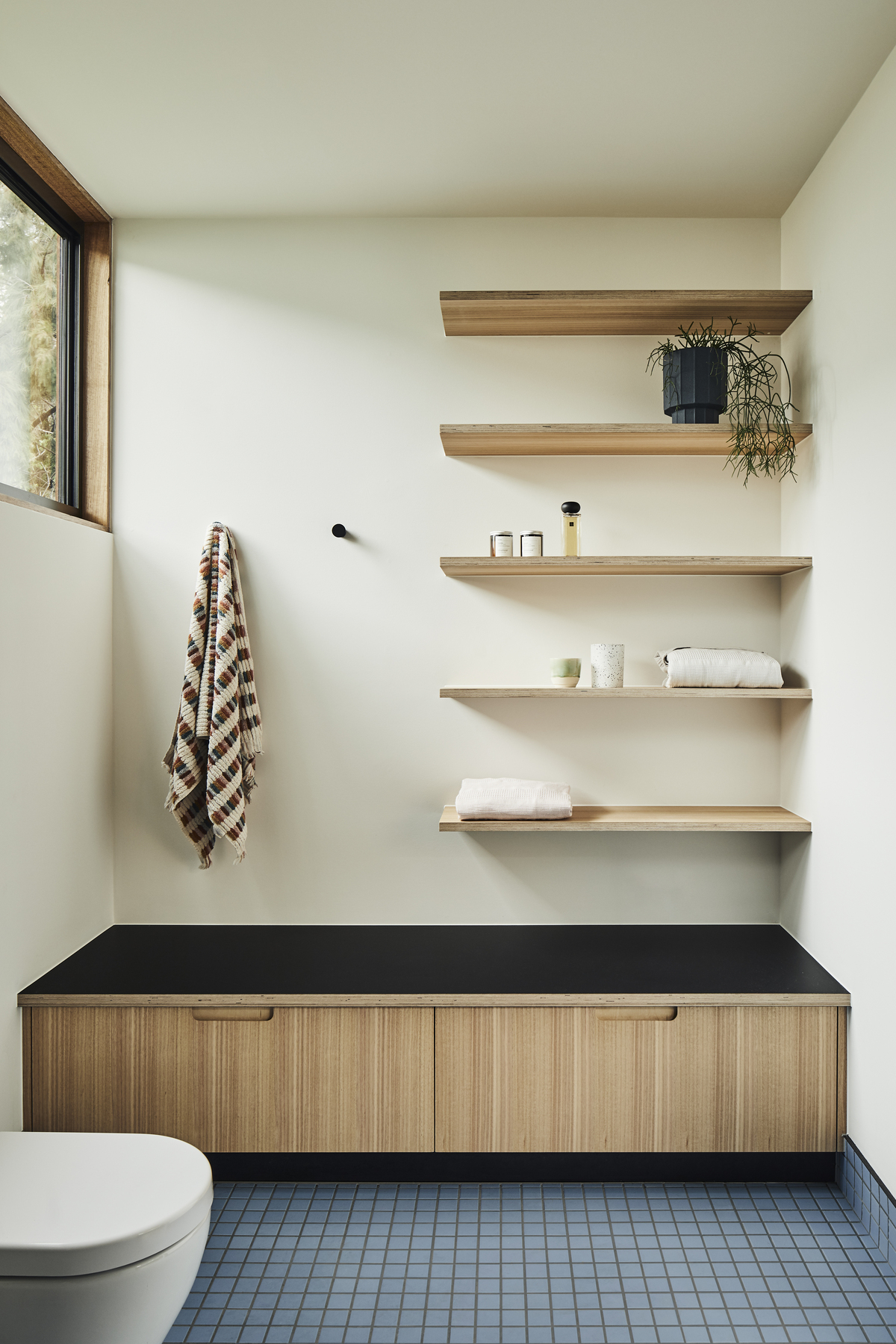 The ceiling of the new bedroom follows the pitch of the roof, enhancing the sense of space and light. A simple window above the mirror in the bathroom brings in some of the greenery from the garden inside. 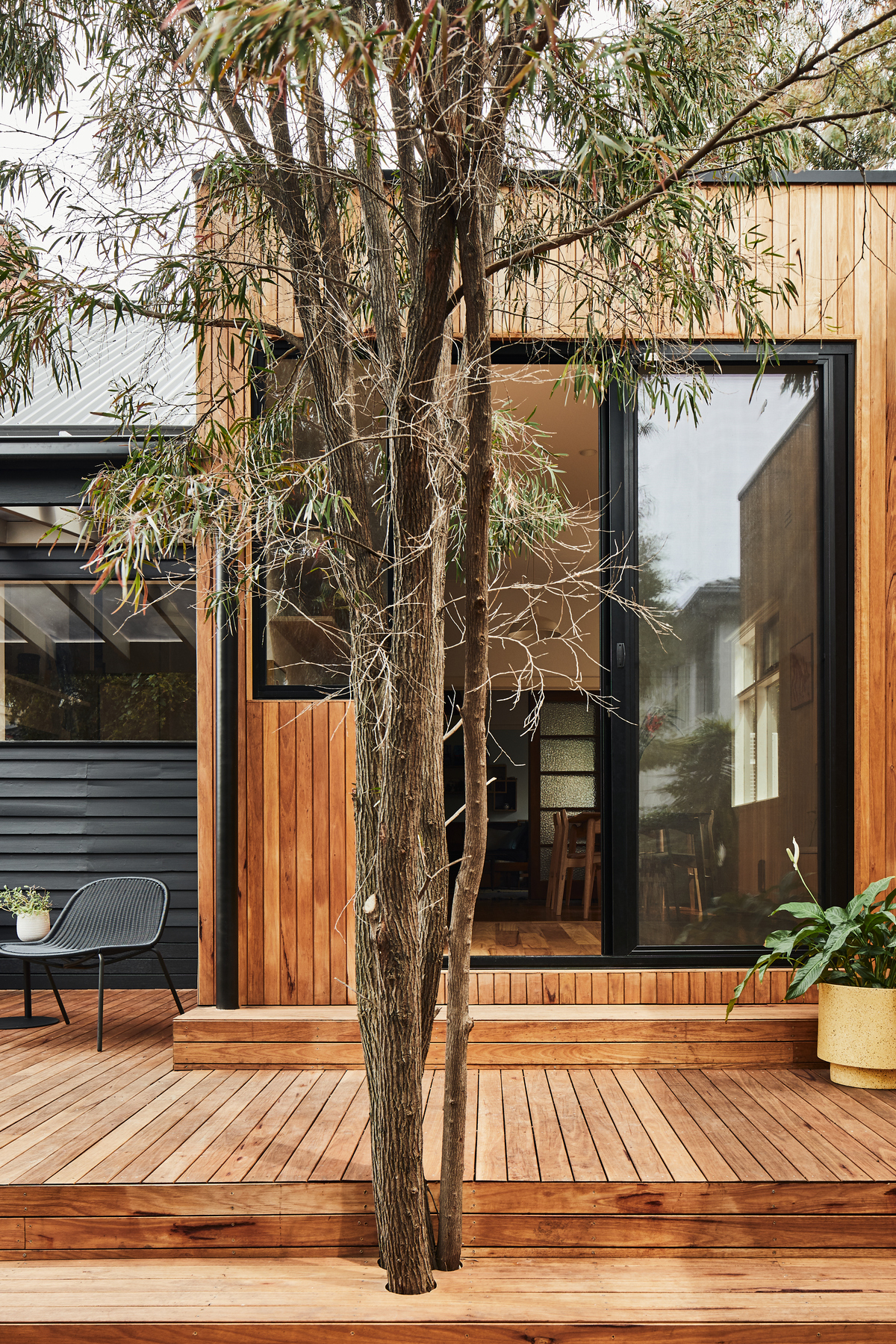 Another new deck opens the home up to the garden from the kitchen/dining space. A hole has been cut out of the deck to allow an existing tree to remain, retaining one of the assets of the backyard, while also creating a delightful outdoor room. 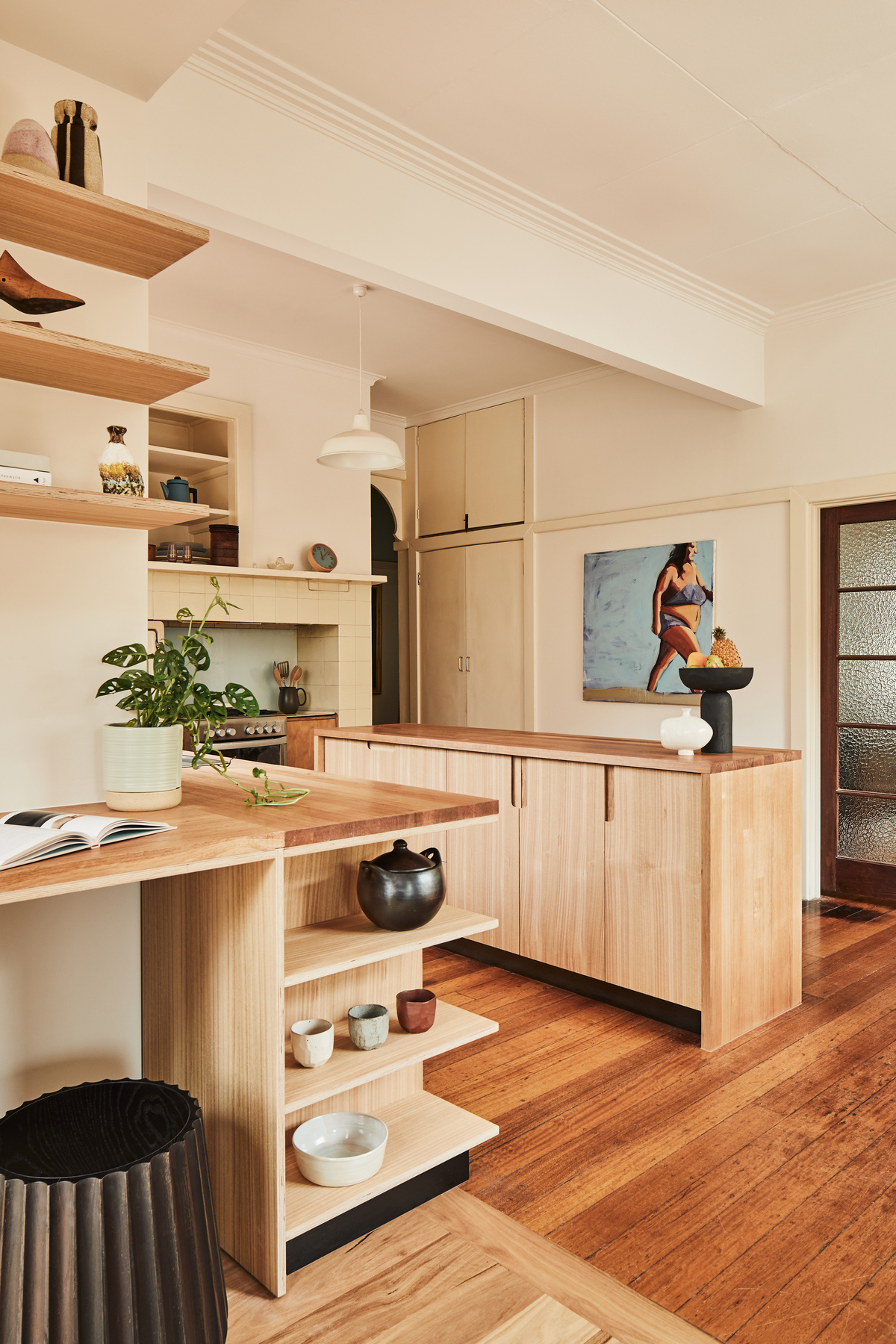 "Working with existing conditions always presents challenges, especially when trying to tie together old fabric with new. Decisions needed to be quickly made on site as to what needed to be discarded for cost as well as aesthetic reasons." - Circle Studio Architects 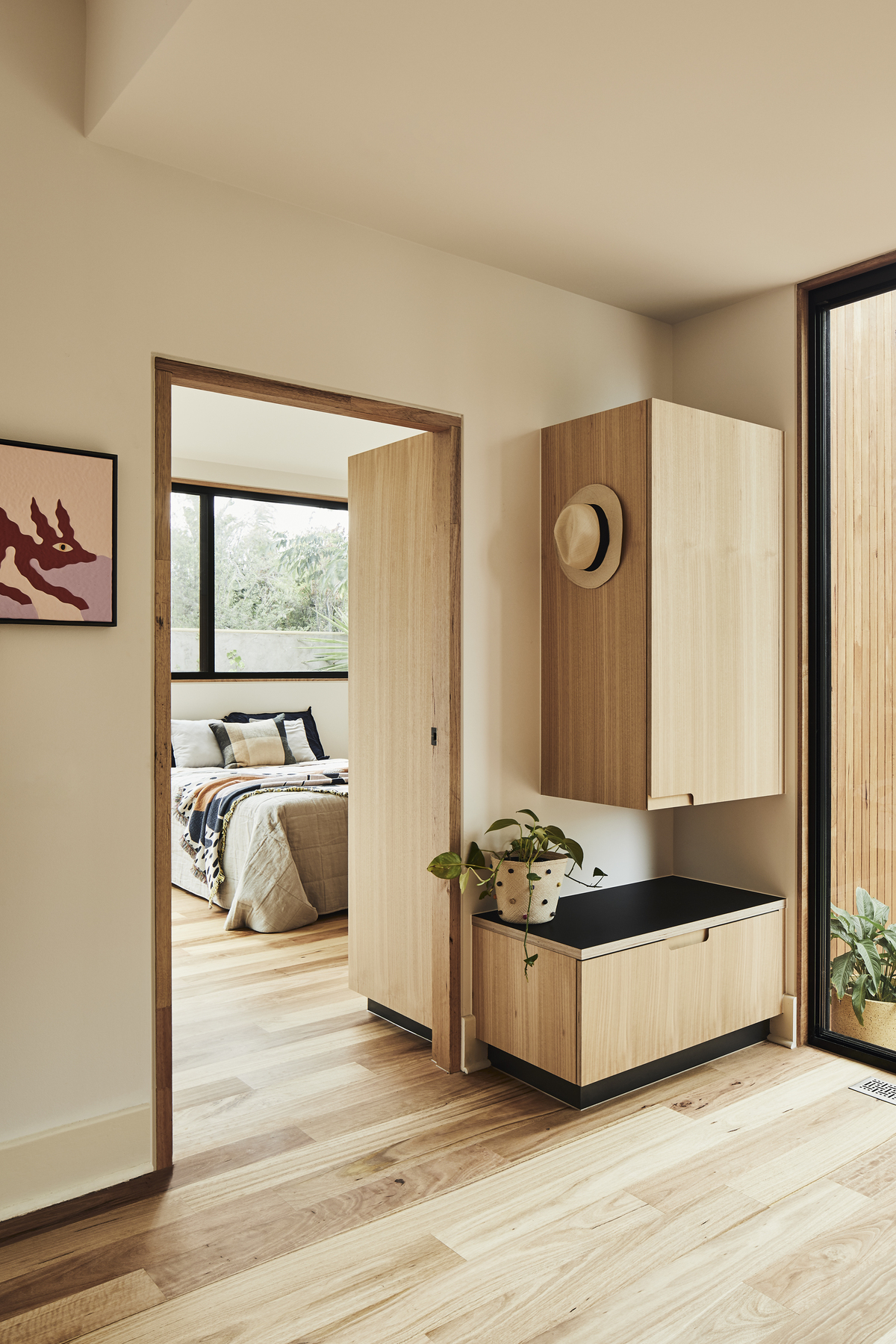 By successfully marrying old and new, Circle Studio Architects has avoided creating a soulless modern addition and, instead, has crafted a new layer of history for this character-filled home. 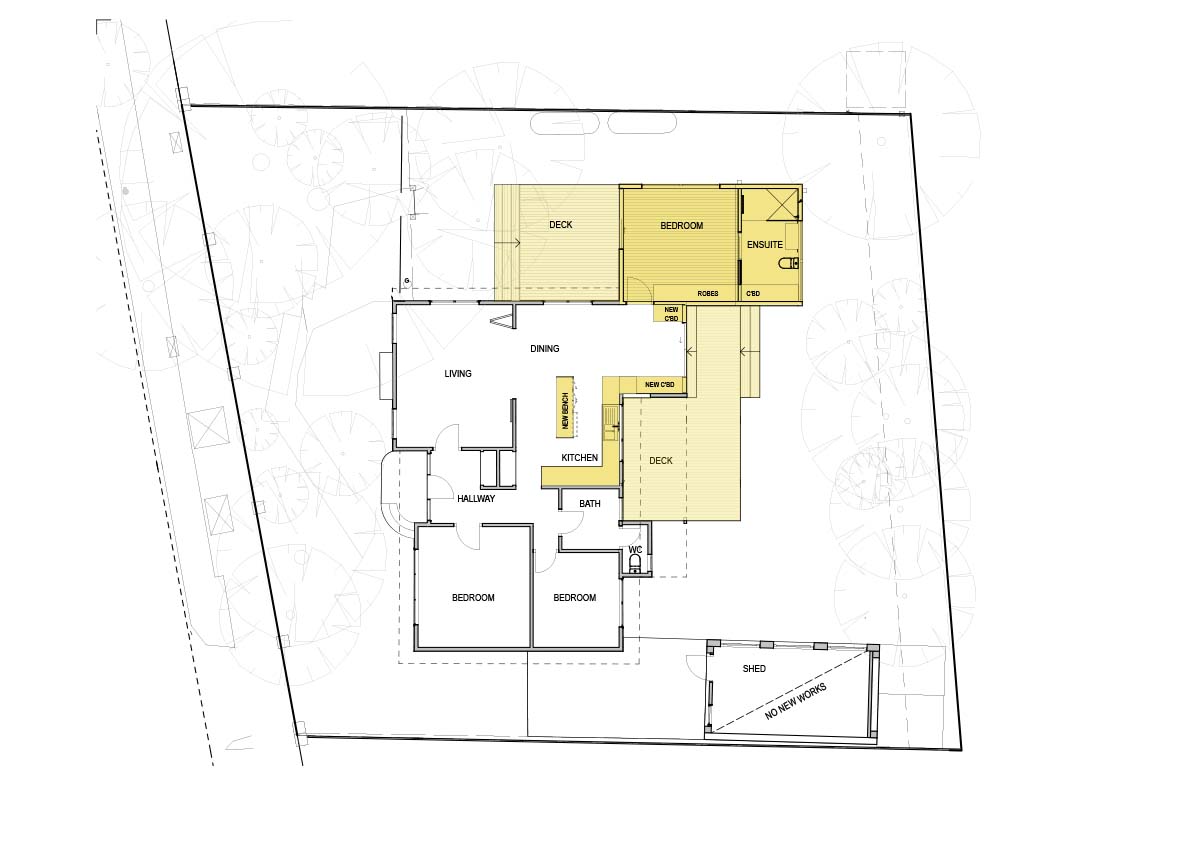