Parure is a set of various items of matching jewelry, reserved for royalty and the social elite.

Like its namesake, Parure House in Melbourne's inner suburb Kensington is a matching set of separate architectural ideas. When seen together, the separate gestures become bigger than themselves, displaying a richness of detail and experience.

Architects EAT play with light and dark, compactness and openness, privacy and exposure, to create a house that is exciting, surprising, and -- like those 17th Century jewelry sets -- dazzling. 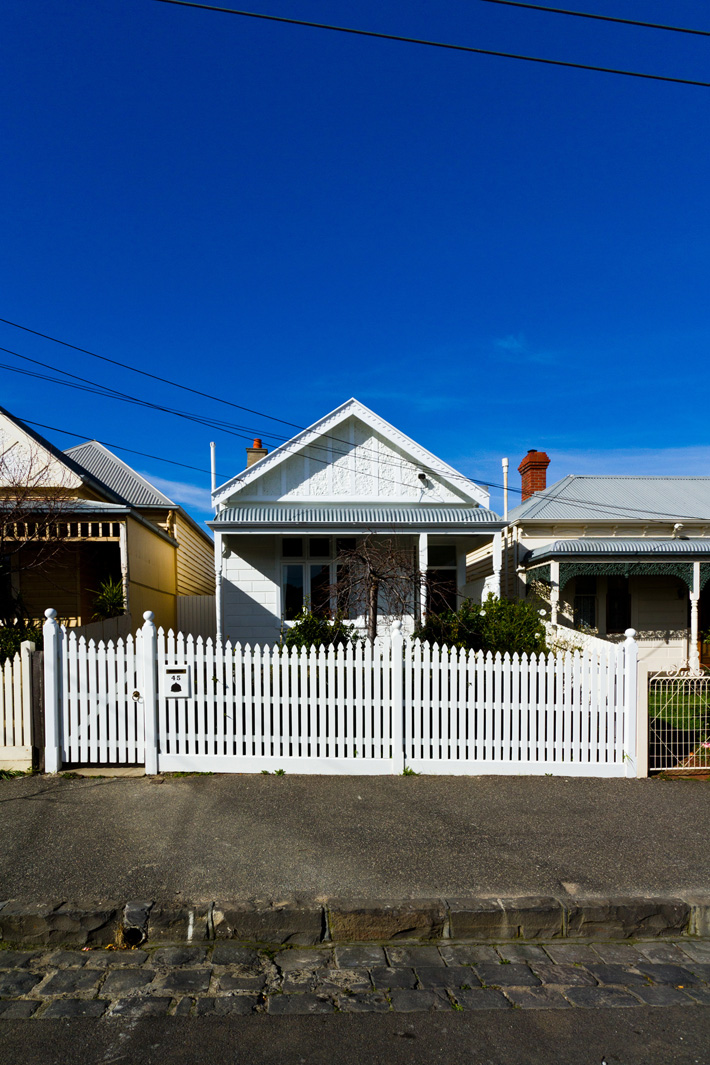 The first surprise Parure House has in store is the contrast between the historical street frontage and the modern renovation that's taken place past the front door. Though, if you're spent any time in Melbourne homes, it's probably not going to surprise you that you should never judge a home by its historical front! 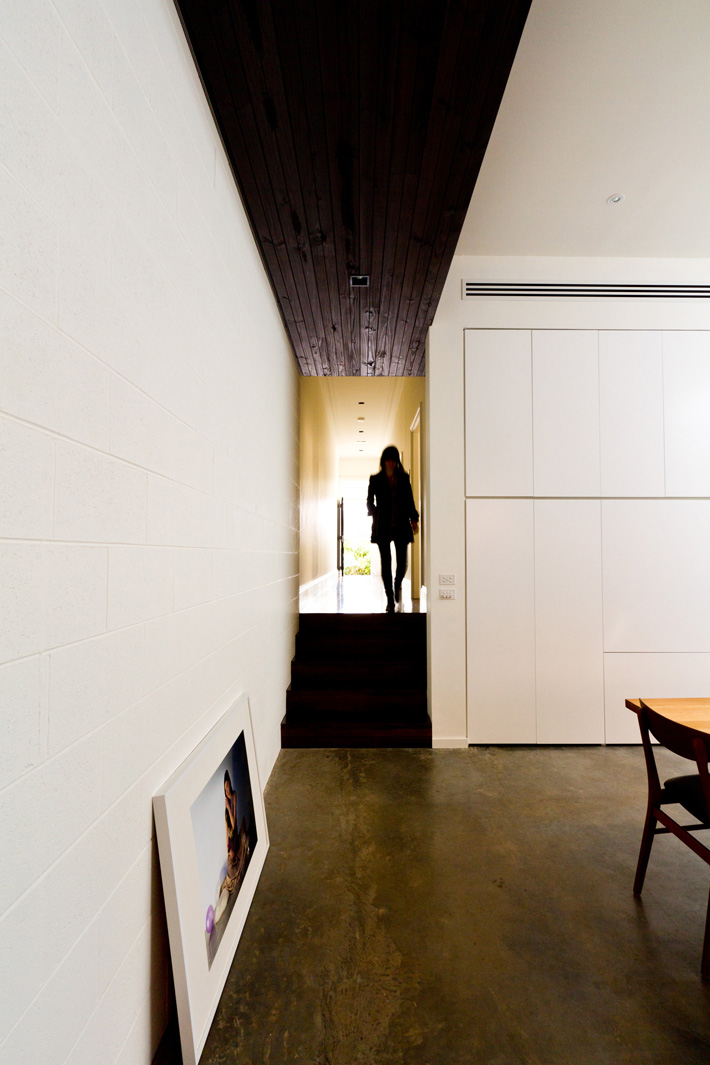 After passing the front two bedrooms which have been left intact, you step down into the new, sunken living area. This part of the house has been dropped to ground level so it can be built on a concrete slab for thermal mass benefits. Stepping down also creates a sense of arrival in the new living area.

The corridor itself is designed to be a dark space which draws you to the light of the living area. 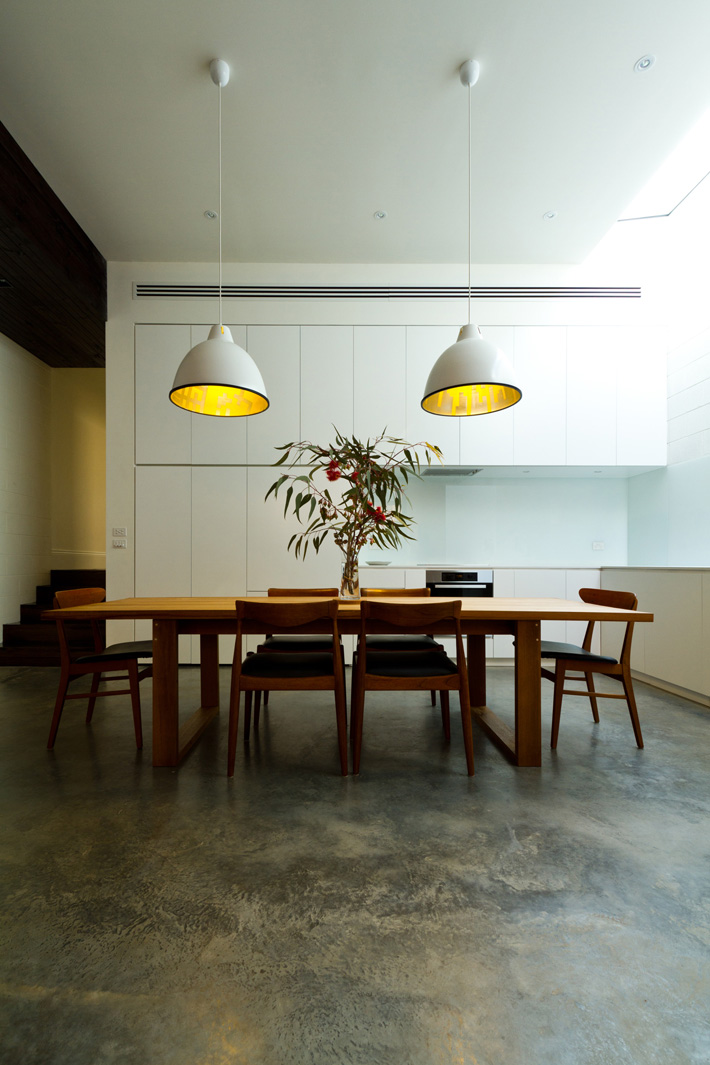 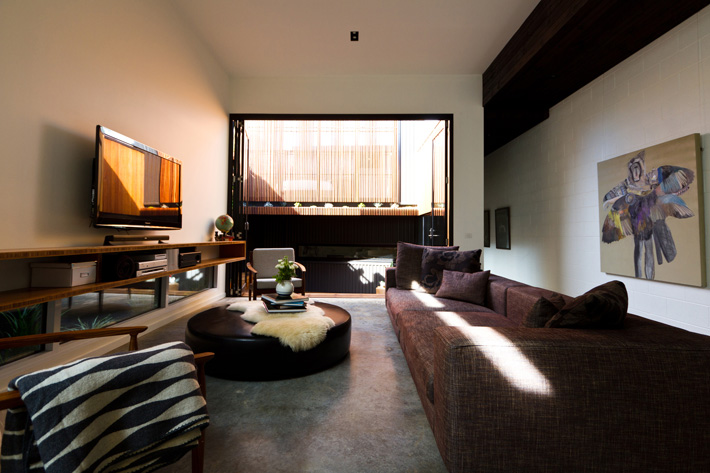 The living area plays with light. The kitchen which is a work area and requires good lighting is stark and white, with an overhead skylight that bathes the space in natural light. The more intimate lounge is treated with darker colors and more sedated lighting, creating a moody, romantic space.

Beyond the lounge, light from the internal courtyard reflects off timber battens to create the sense of a warm, lively space. This draws the eye -- and visitors to explore this private outdoor space. 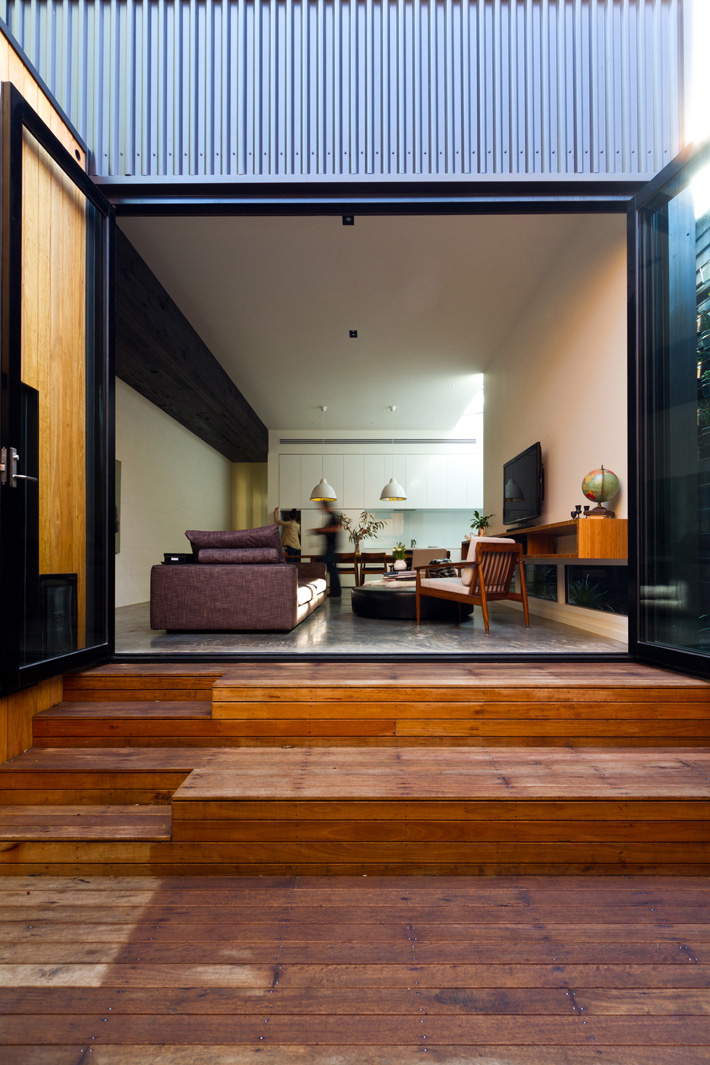 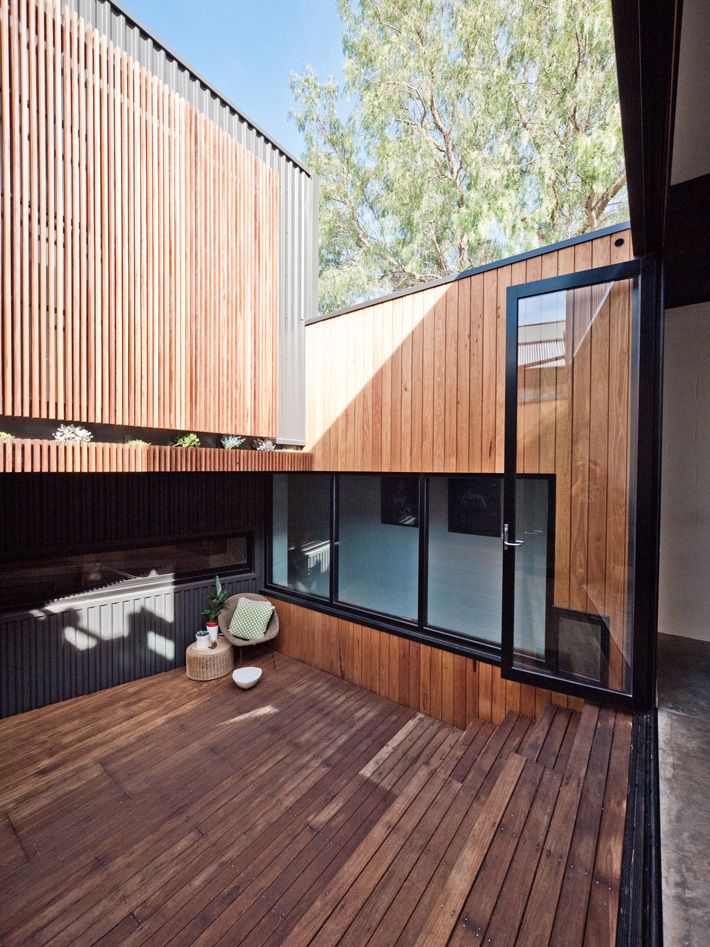 The living area opens onto an internal courtyard in rich timber. The courtyard steps down below ground level to create space for a double storey building on the rear boundary. By sinking the courtyard, Architects EAT were able to incorporate amphitheater-style seating for informal gatherings.

A timber screen provides privacy to the upstairs bedroom and also adds to the richness of this outdoor space. A thin strip of plantings peaks through the timber screen to inject some greenery. 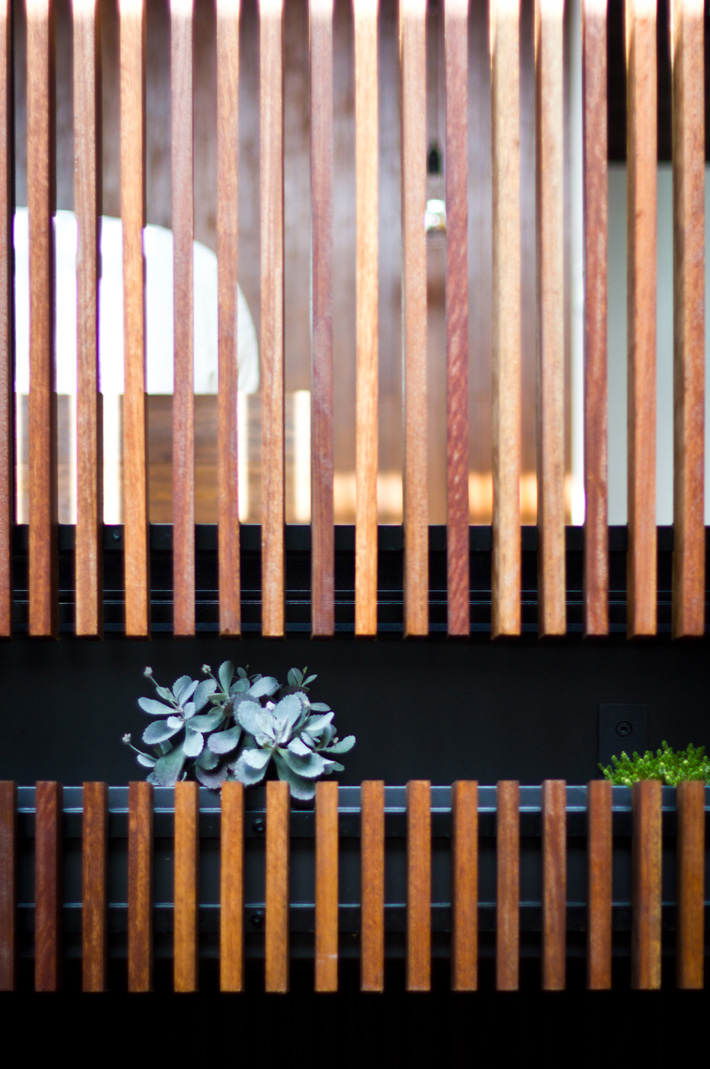 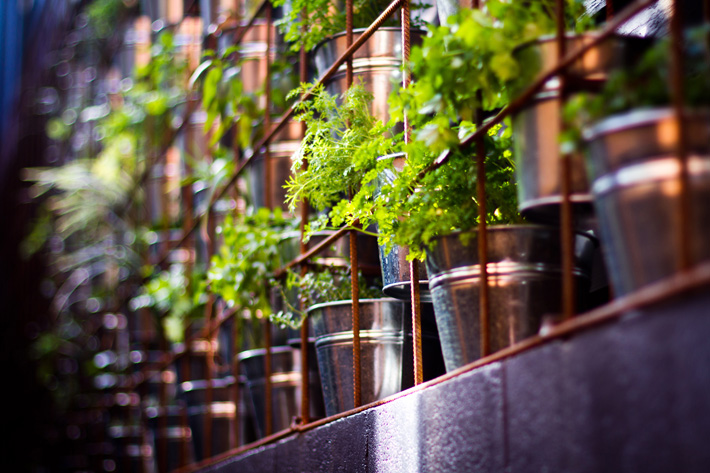 A clever vertical garden is created in the courtyard by stacking tin pots into a scaffolding made from reinforcement mesh. The mesh naturally rusts and weathers, contrasting with the shiny silver pots. It's a great way to bring in some green without sacrificing floor space. 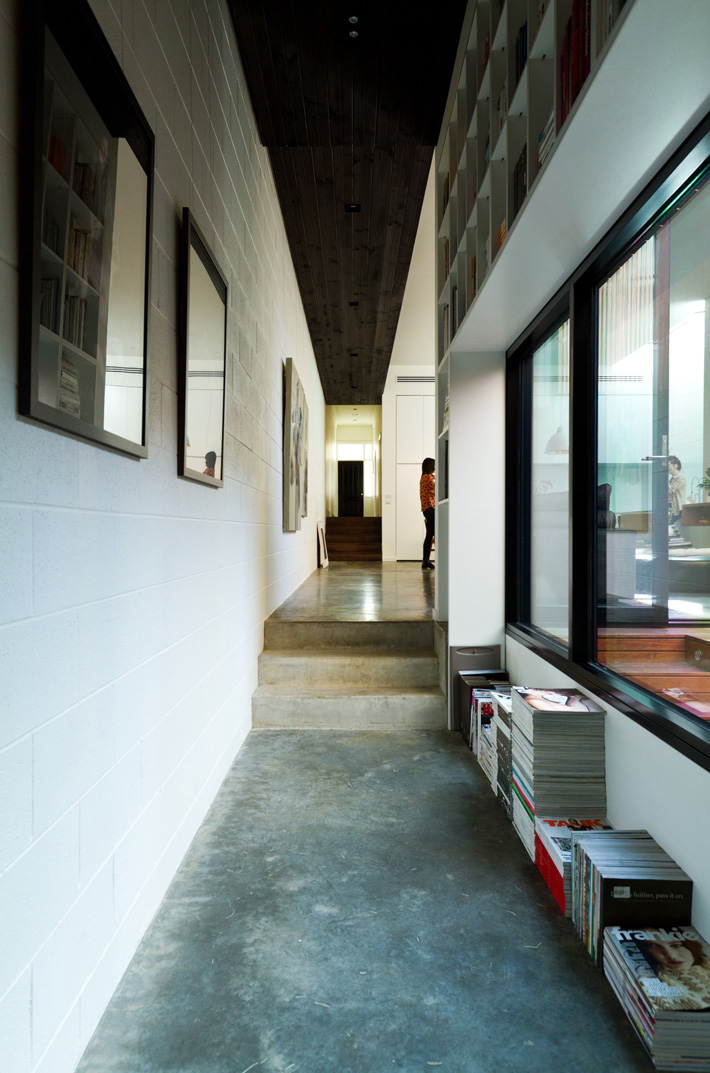 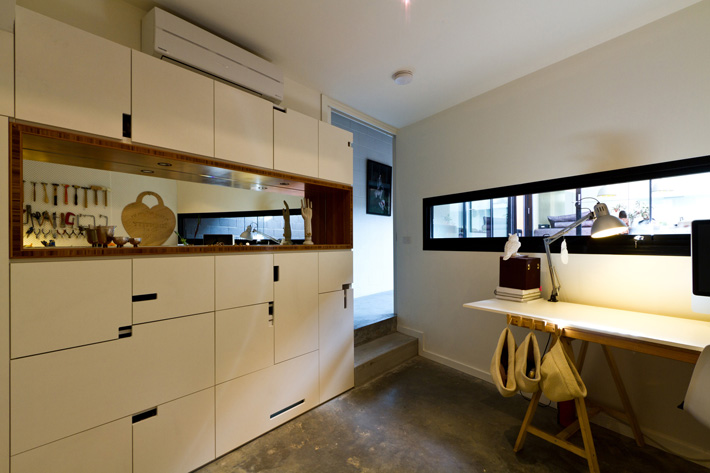 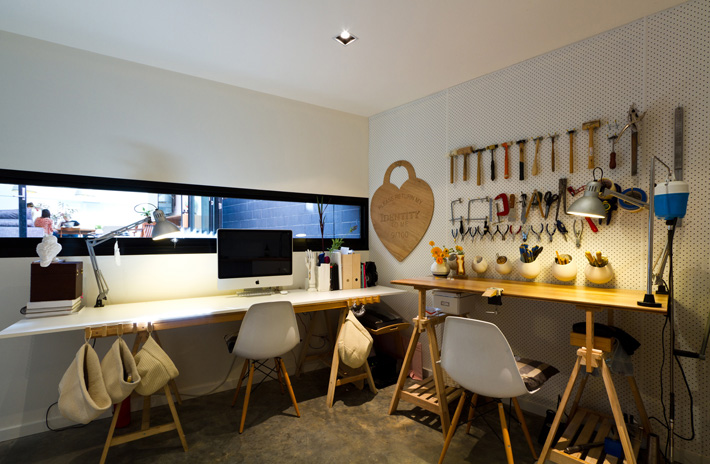 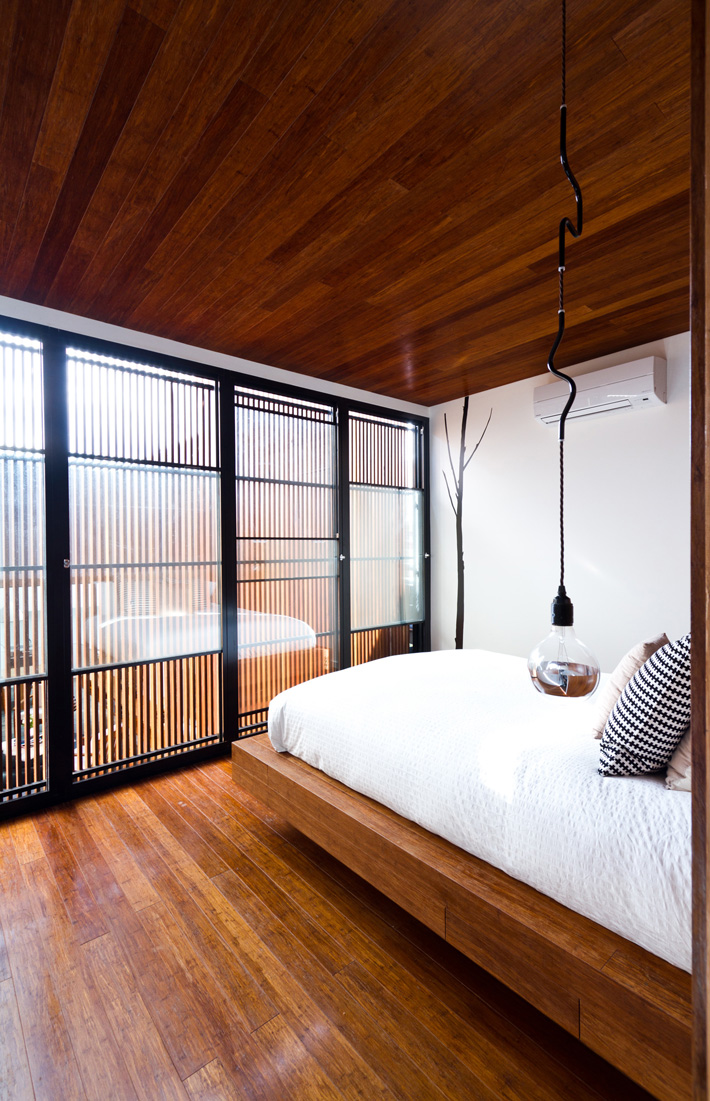 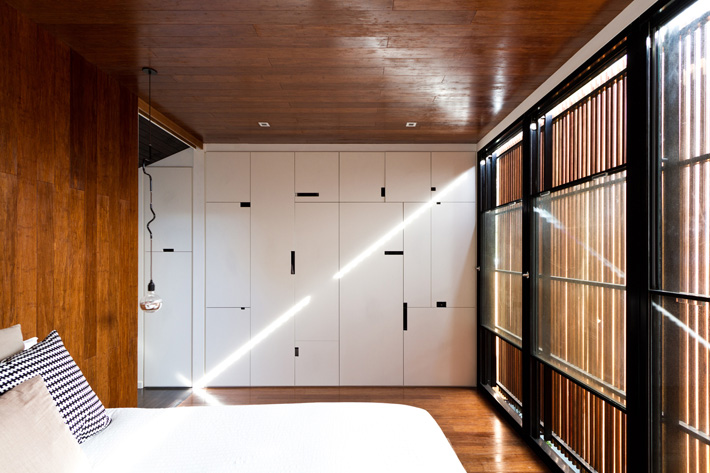 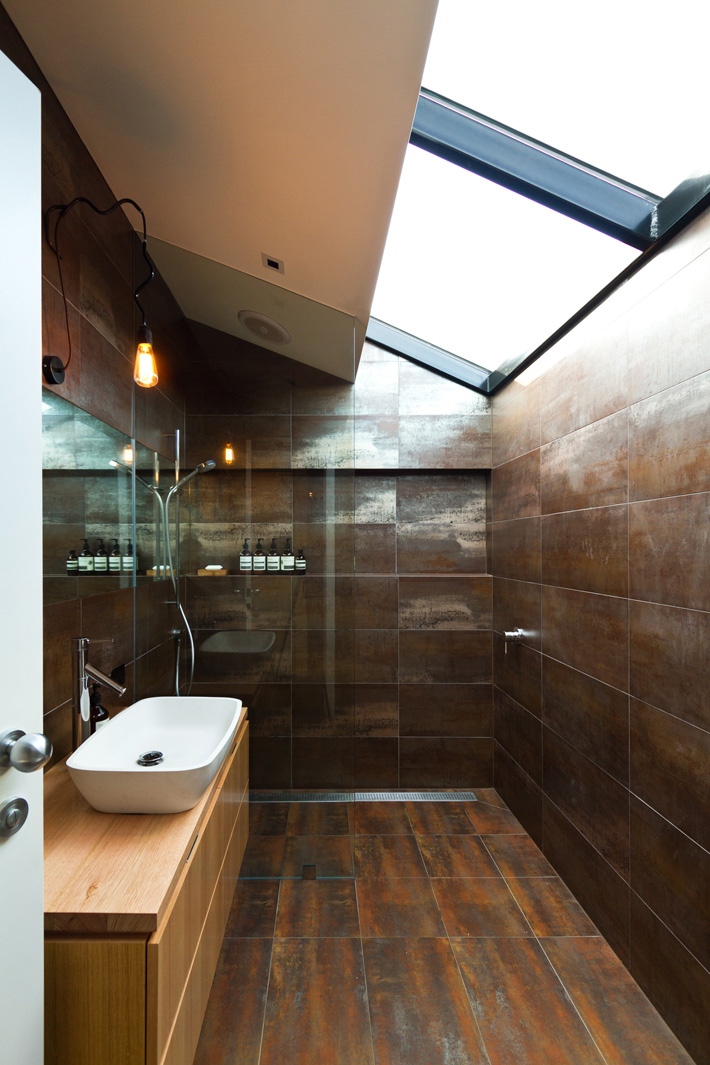 Pressed hard against the rear boundary is a double height space containing a studio and master bedroom with ensuite bathroom. This double height space creates a physical separation between hectic family life and work/rest time. Because this area has been sunken below ground level it appears as a single storey space from the lane behind, in keeping with planning laws.

In the bedroom, dappled light filters through the timber screen and rich timber creates a warm and romantic space.

The studio, in contrast white dominates to create a light and bright space. A built in cabinet is a striking feature of this area, with its haphazardly cut finger pulls.

Parure House is packed full of surprises and dazzling plays on light and space. It's the contrasts of this house that make the relatively small space sing.

Stepping down into the site is almost disorienting, but then the central courtyard is revealed which reasserts your bearings. Combinations of timber, white and concrete creates a modern space that avoids feeling cold and sterile.

Perhaps unlike the wearer of a parure set, this house is introverted -- turning in on its central courtyard. Yet like a sophisticated socialite, it is charming and intriguing with just the right amount of sparkle.