From the Outside, Vader House Seems Menacing. Inside It's Different

Emerging from behind its high boundary wall, the distorted roof form of Vader House by Andrew Maynard Architects interrupts the symmetrical roof line typical of Fitzroy, and breathes new life into this Victorian Terrace… 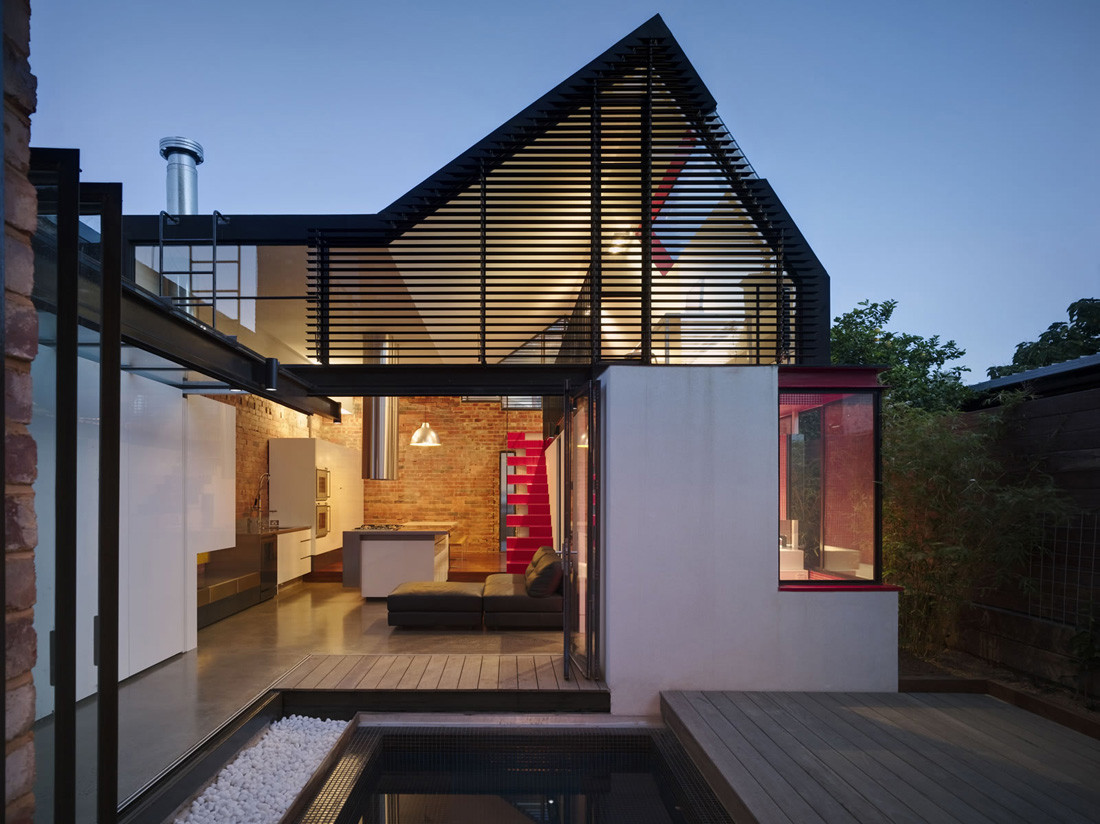 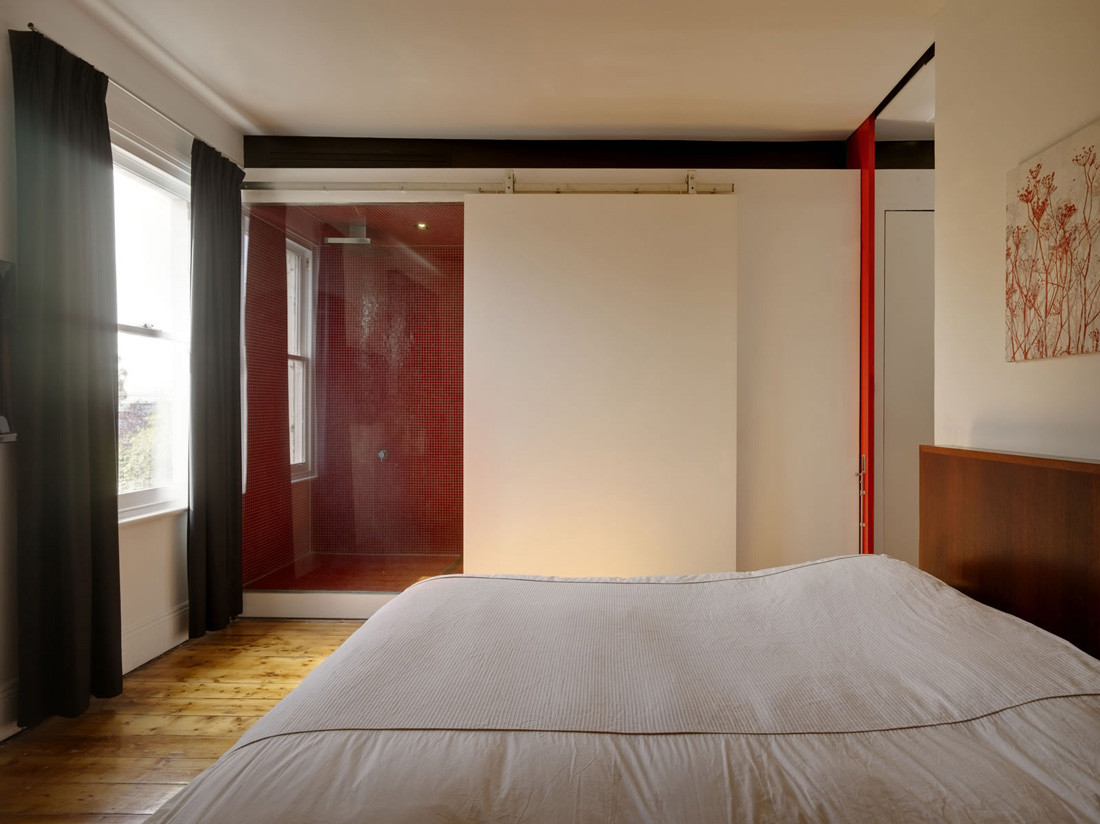 The extension is a framed steel skeleton which envelopes the unusually high masonry boundary wall built prior to height restrictions, reclaiming it into the interior. The roof then responds to site setbacks which result in a distorted and subverted answer to regulations. This produces high folded internal planes, allowing double height ceilings, a mezzanine level and spacious interior. 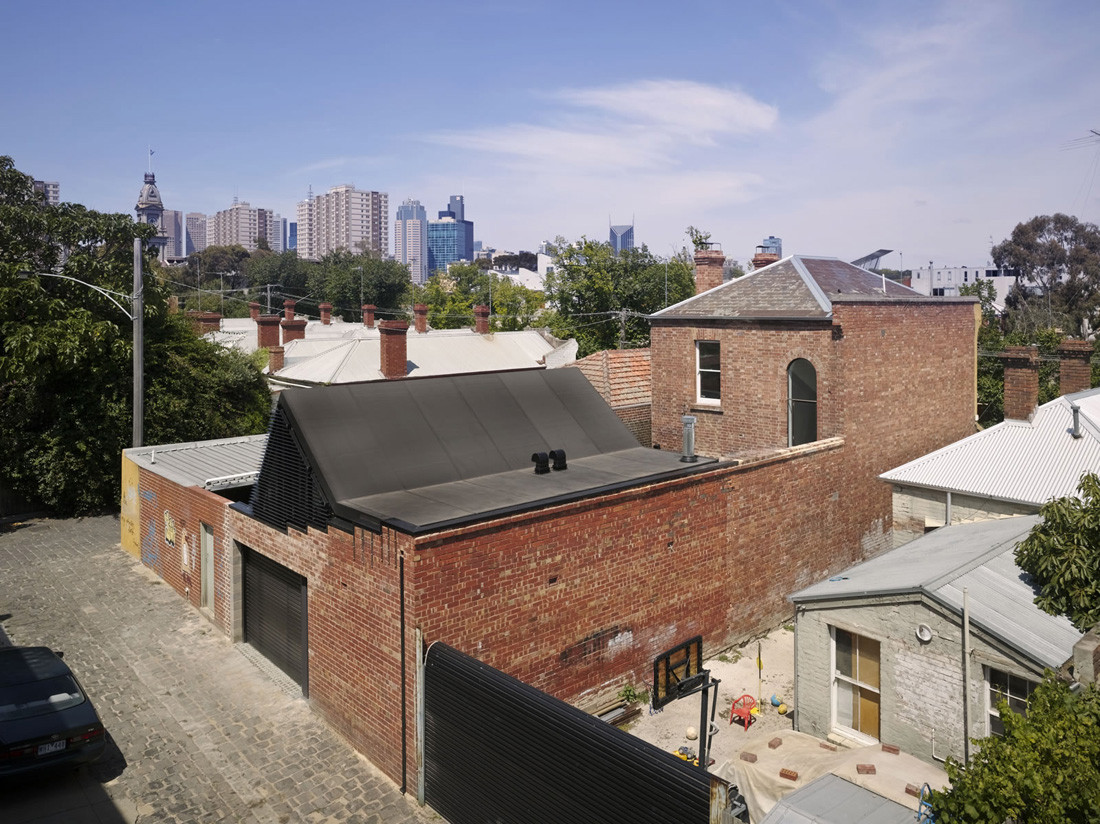 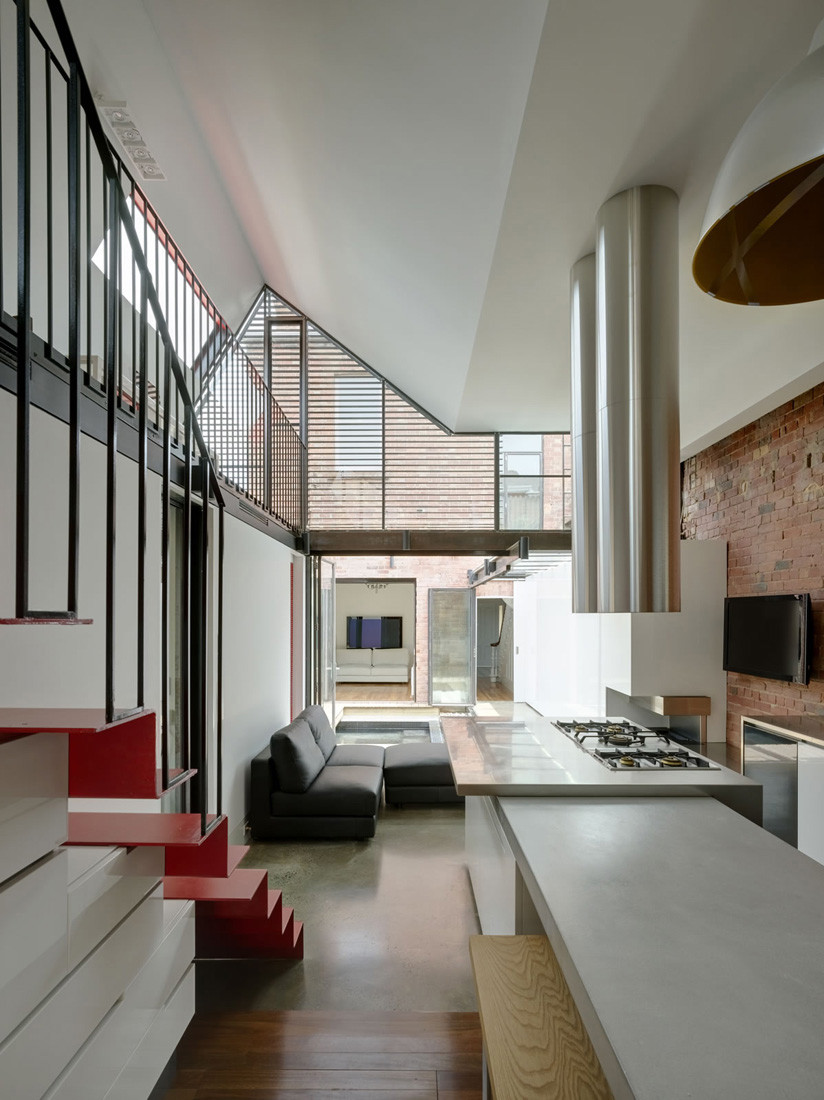 The Eastern and Western facades of the extensions are encased in a shield of louvres. These peel back to reveal a folded internal environment of soft colours framed by exposed steel beams. Playfully, splashes of deep red enliven the interior which is occasionally punctured by windows allowing a cinematic light to dance over the internal workings of the Vader House. 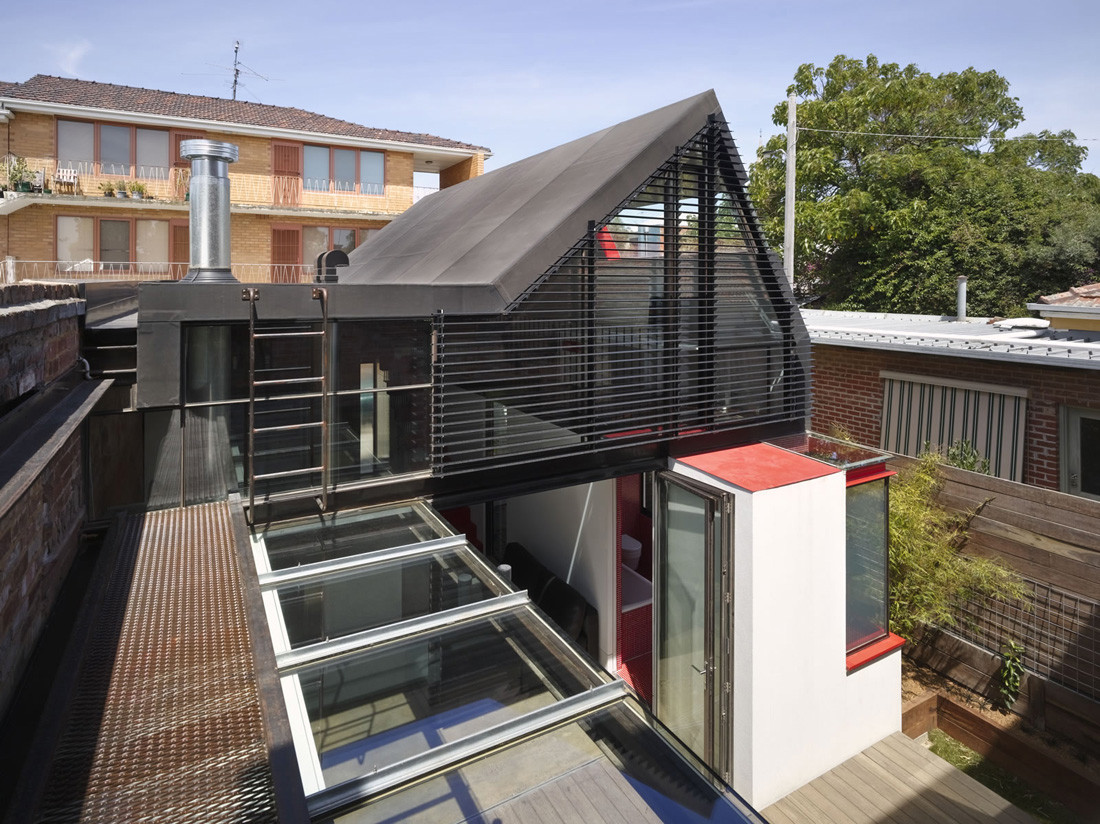 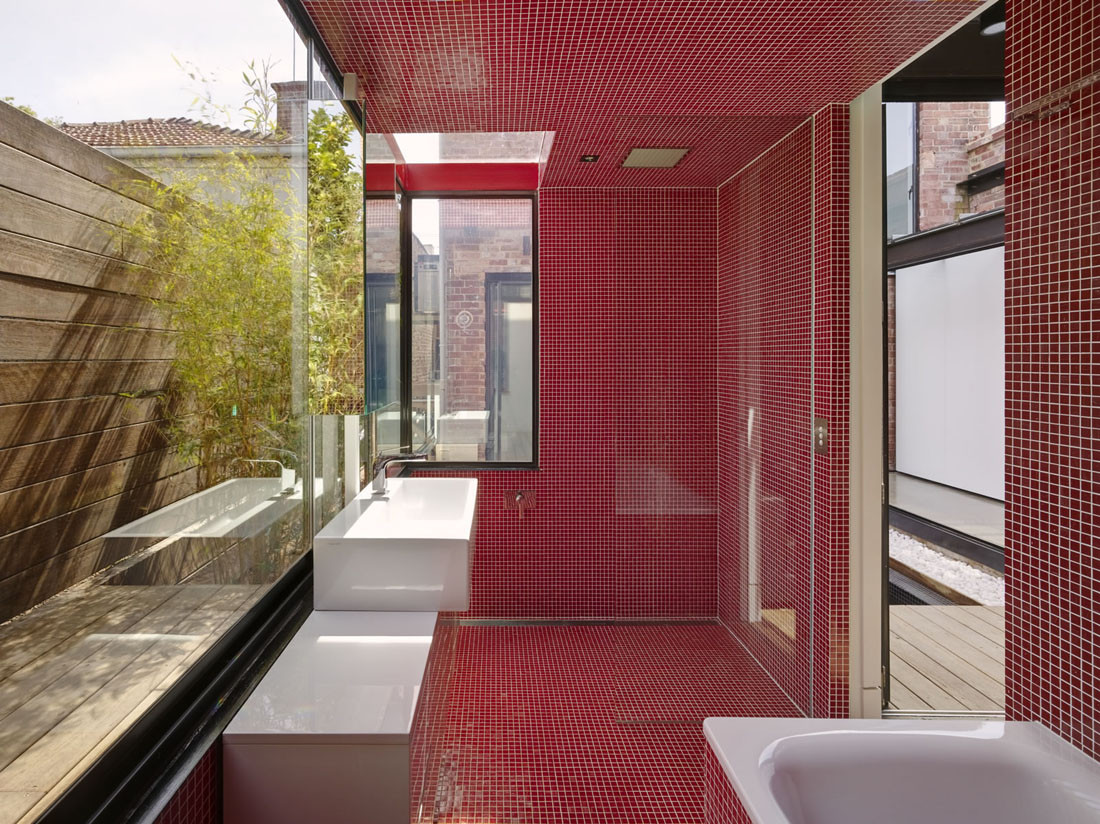 The refined material and colourful palette of the extension, wrapped in a heavy roof form distinguishes itself from the dark masonry clad terrace from which it emerges. These two opposing forms are united by a transparent glass corridor along the Northern boundary wall, framing an outdoor courtyard. 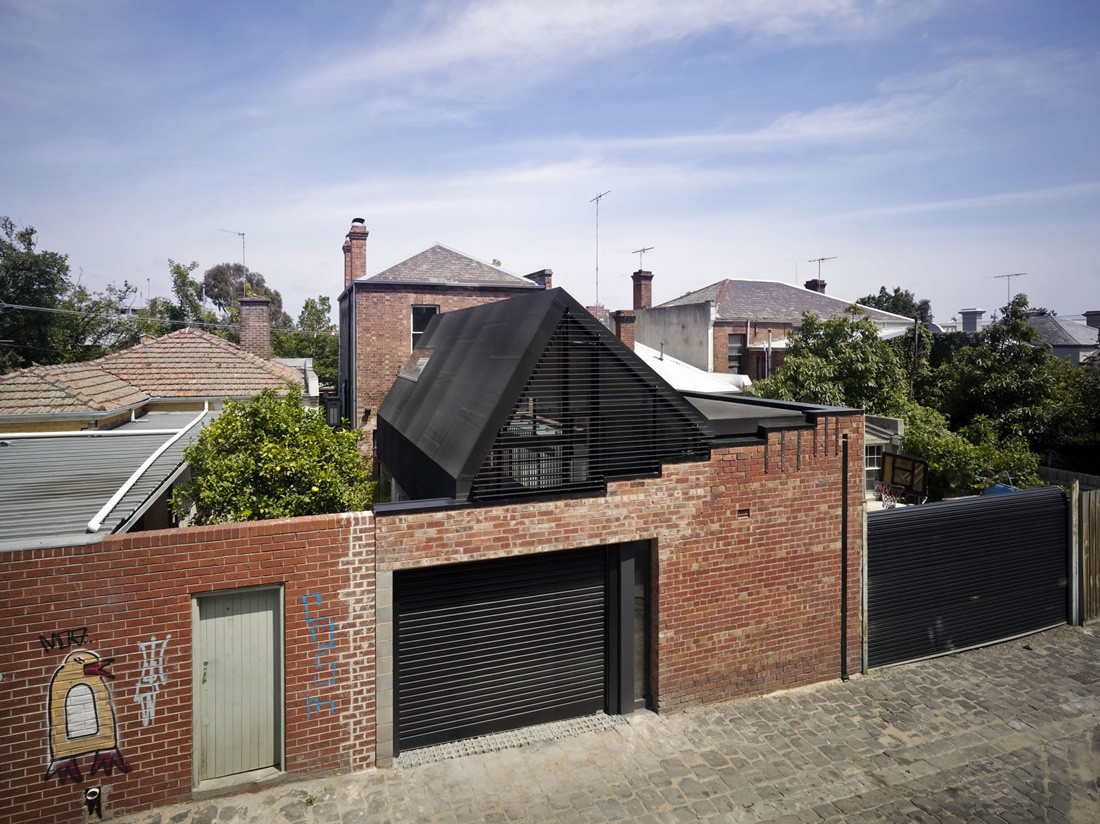 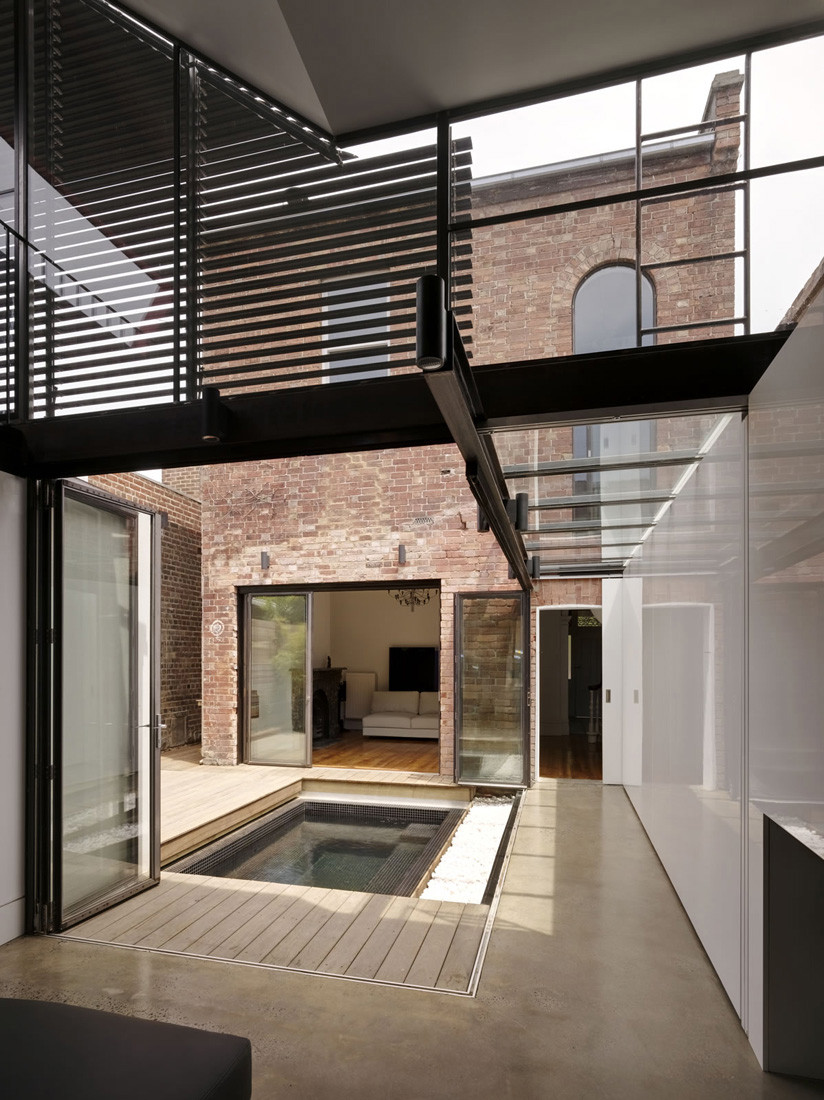 Strategic planning located the courtyard at the heart of the site, allowing both the terrace and extension to have direct contact with this outside space. It creates a central demilitarised zone that allows activities from the surrounding living spaces to spill into. This courtyard ensures that the entirety of the site is utilised. 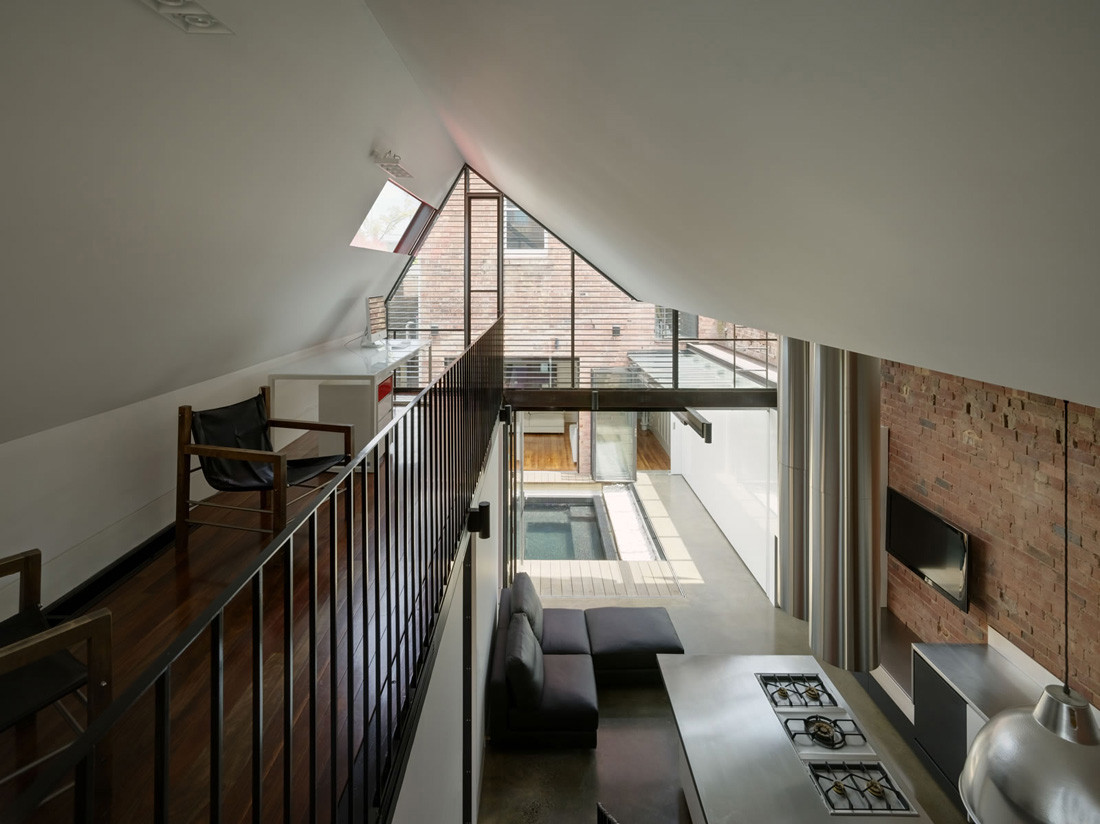 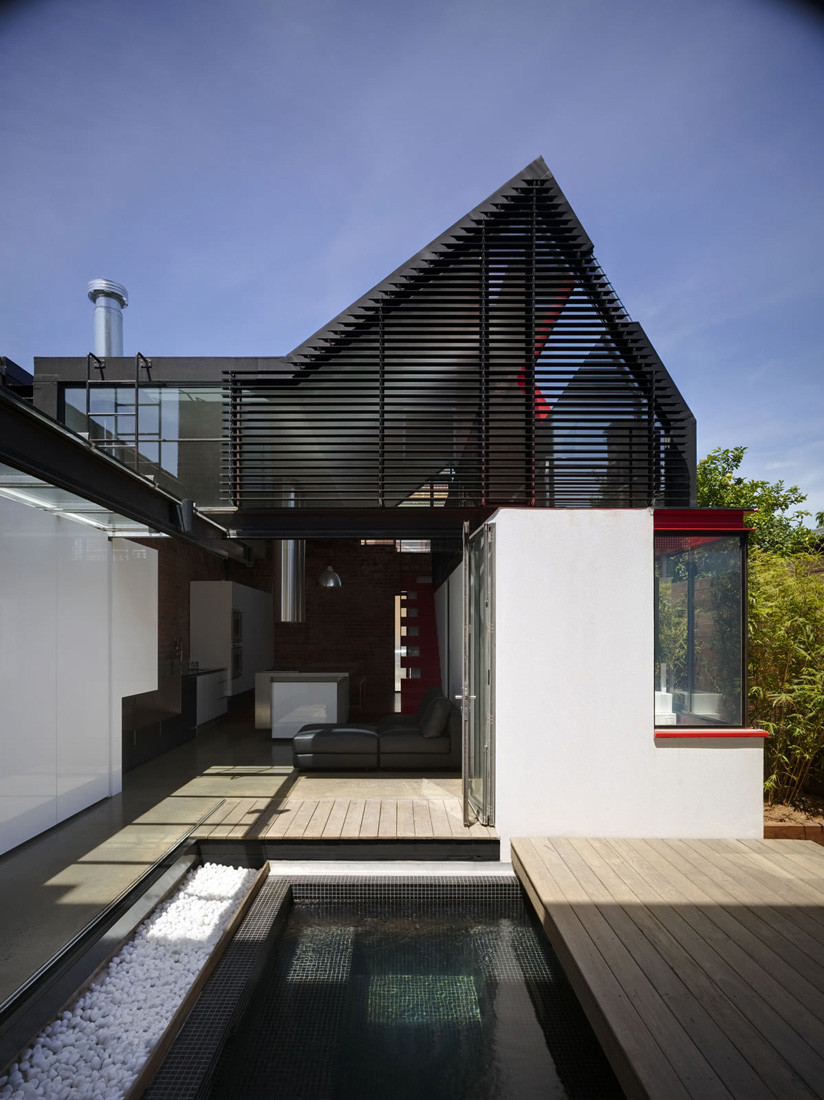 Definition between these internal and external environments is barely distinguishable. Transparent bifold doors allow for constant physical and visual interaction, between these environs. The extensions is at once inside and out. 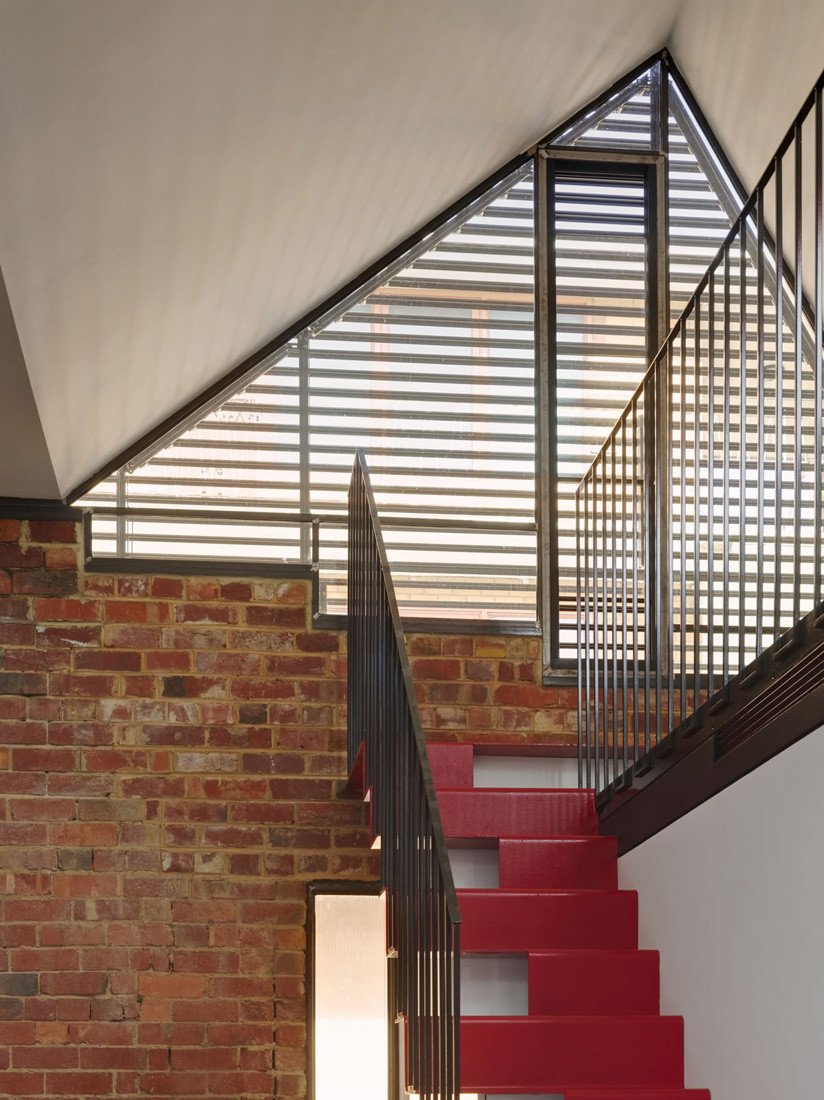 The courtyard's location also provides abundant natural light and ventilation into both the terrace and extension, importantly decreasing reliance on mechanical heating and cooling systems. The open and seemingly simple nature of Vader House later reveals itself to be one of complexity and ambiguity. 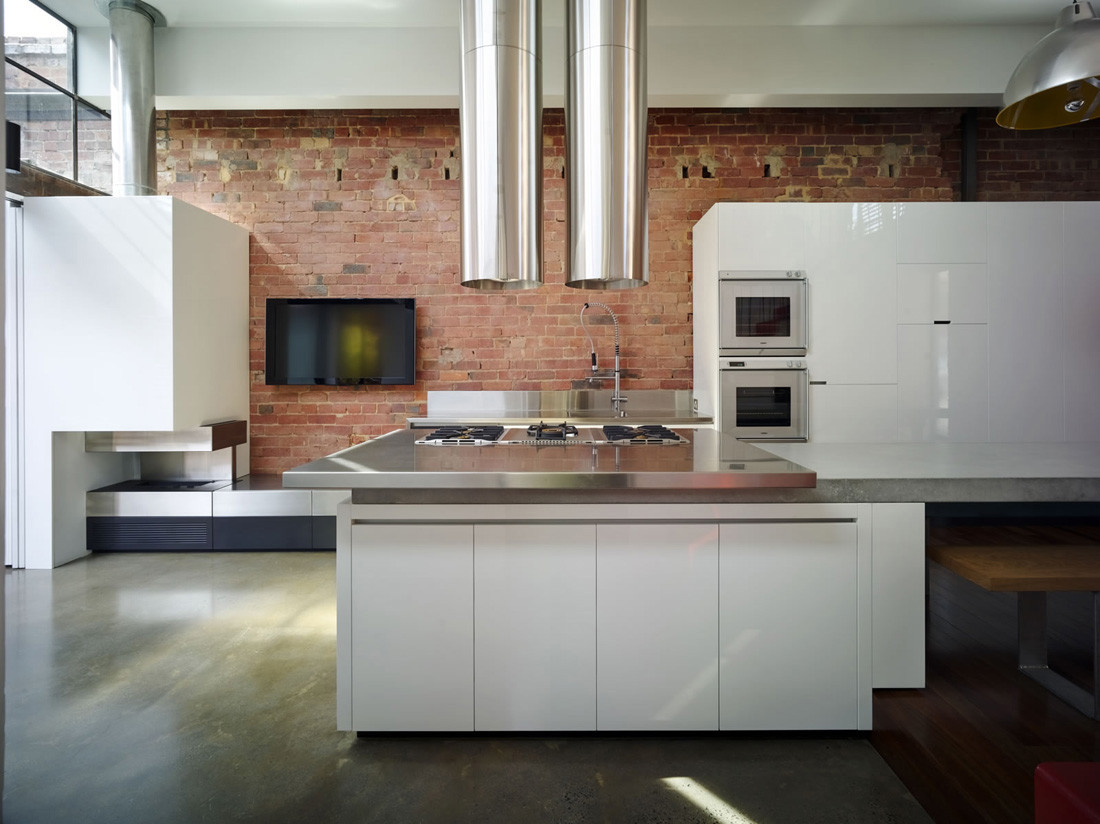 Many elements of the design prove to serve multiple functions. The bold stair case becomes part of the kitchen joinery, the louvres act as light control as much as privacy screening, and the boundary external wall doubles as the internal kitchen wall. 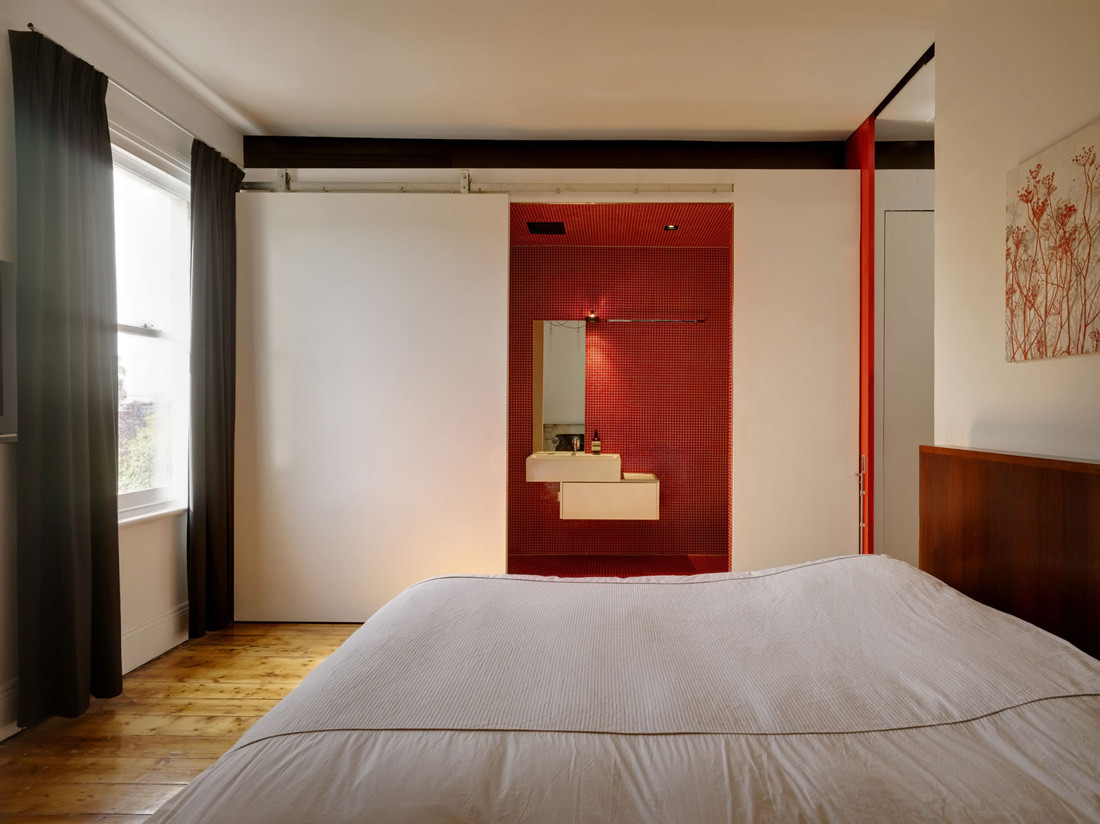 The extension is created out of components that appear to have fallen at the eastern end of the site in a tetris like manner. Unexpectedly a random tetris piece has lodged itself deep within the walls of the original building. This floating block provides the master bedroom with a en-suite reflecting its downstairs companion, fusing the terrace to the extension and giving a glimpse of what one will experience as they move through the site. 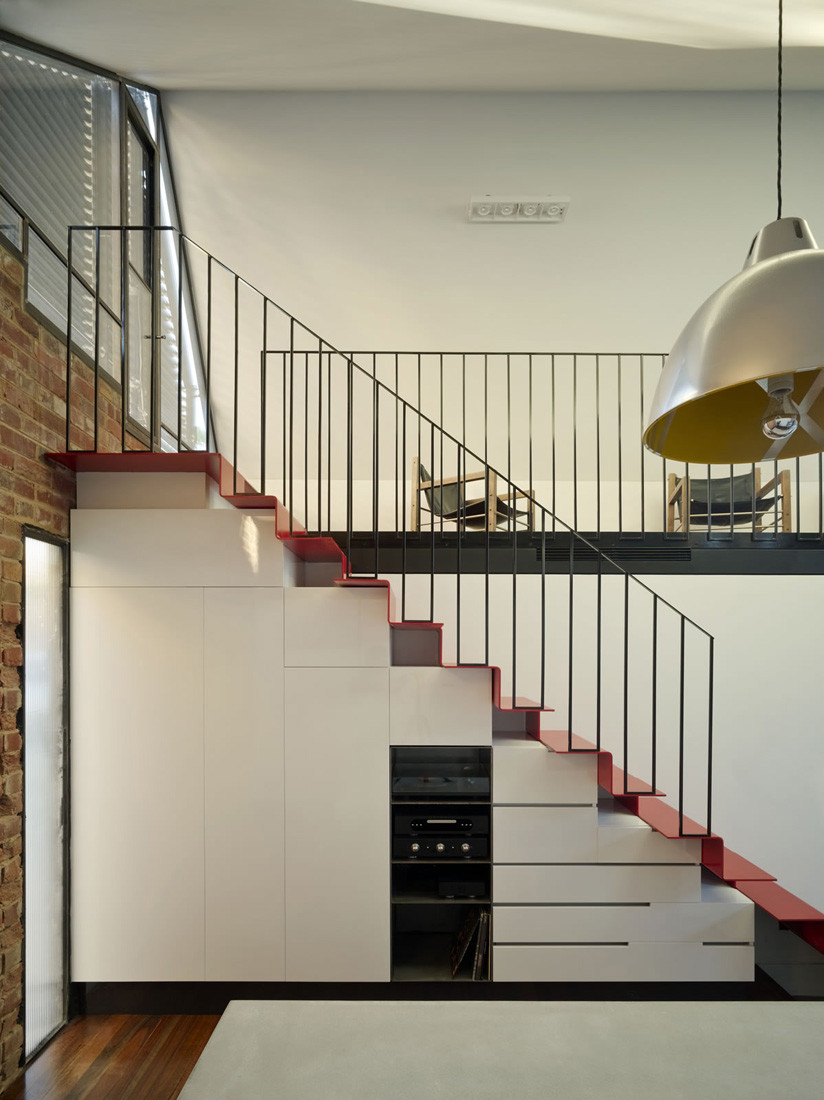 The anatomy of Vader House also extends far below the site. The timber deck in the courtyard doubles as a retractable deck, when pulled aside reveals a hidden spa, right at the very heart of Vader. 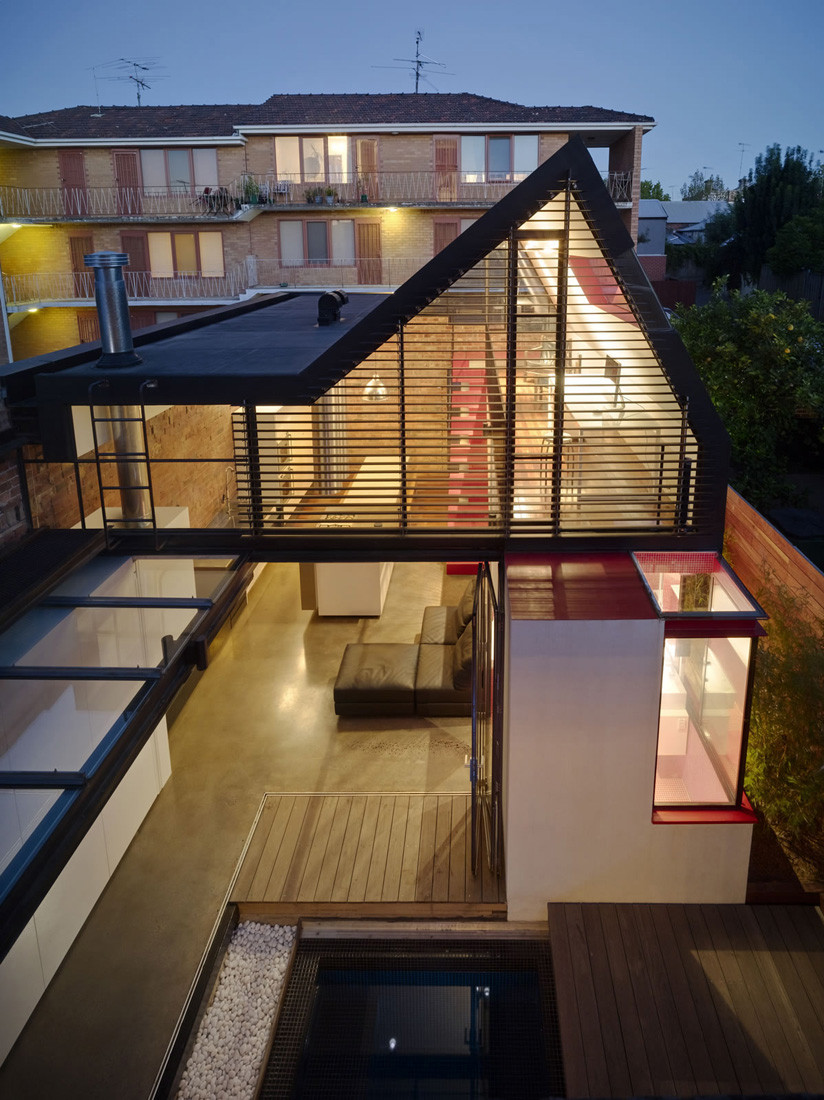 Similarly the timber floor boards in the extension form a trapdoor that when opened exposes a cellar, extending far beneath Vader. When these doors are opened, they alter the nature of their spaces significantly, providing the extension with a dynamic and chameleon-like interior. 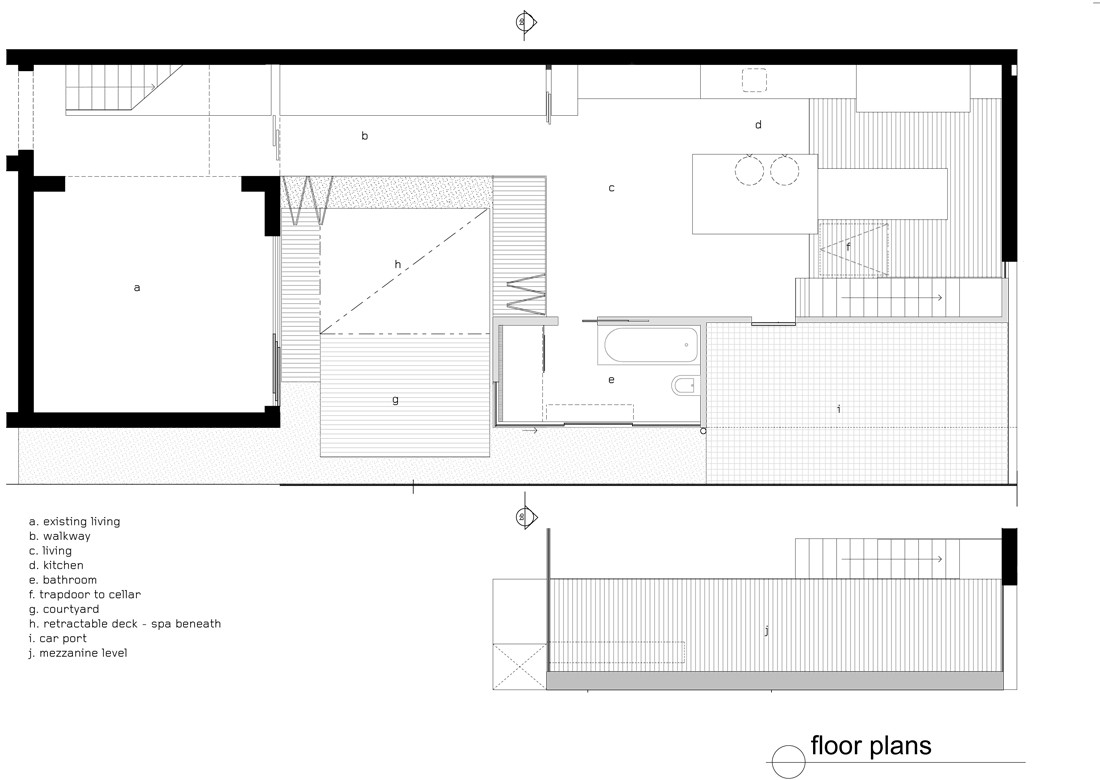