Weatherboards are a typical suburban building material, but this house is far from typical... 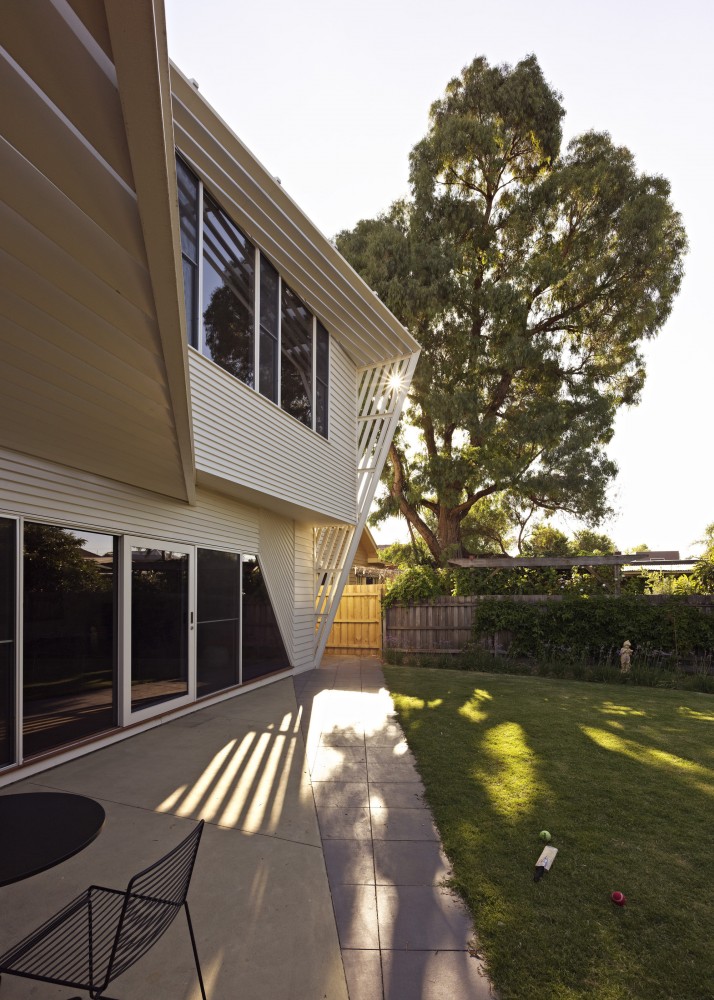 The brief was to renovate and extend the existing weatherboard dwelling to accommodate four to five bedrooms, bathrooms, kitchen and living areas to suit their current needs as well as potential future growth. The client was sensitive to maintaining the current streetscape, but was also interested in extending their architectural knowledge and appreciation with the new extension.

The site is a medium sized block in the North Eastern suburbs of Melbourne. The streetscape is relatively consistent with single and renovated two storey weatherboard bungalows along its length. 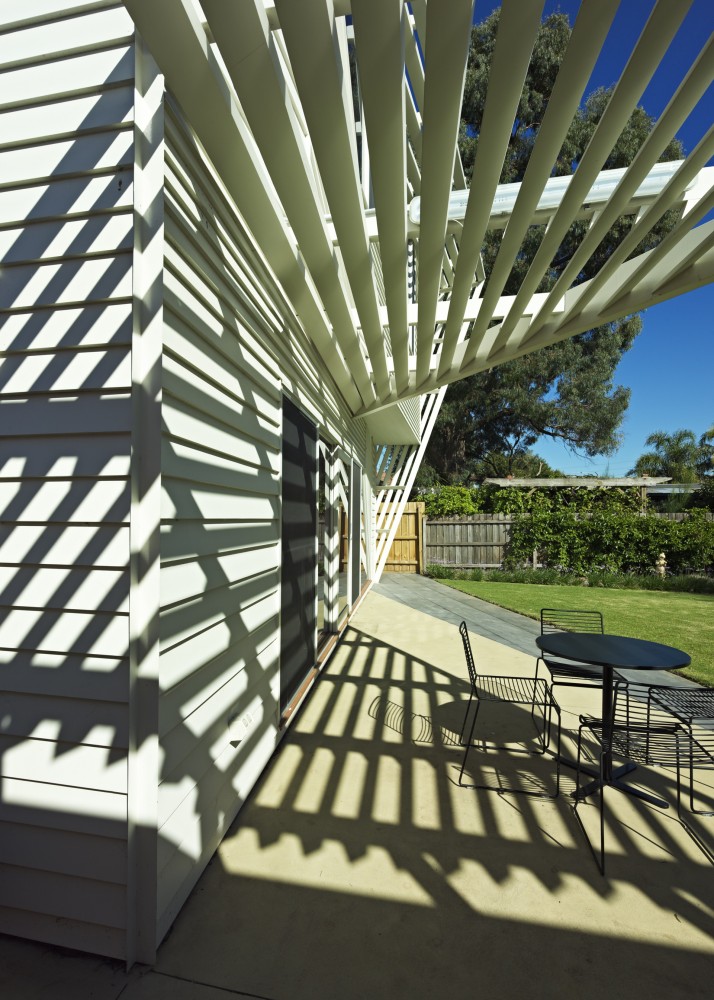 The new additions extend the use of weatherboards as the principal cladding material. Conventional detailing is manipulated as the extension moves away from the existing building. The weatherboards compress as they extend upwards along the sides of the building. 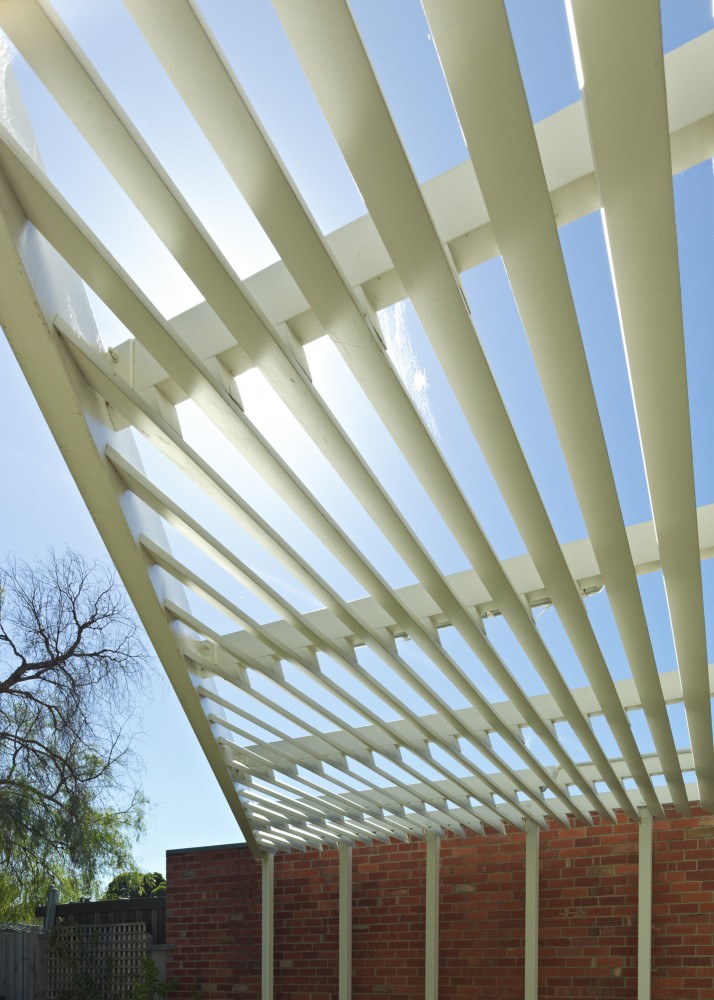 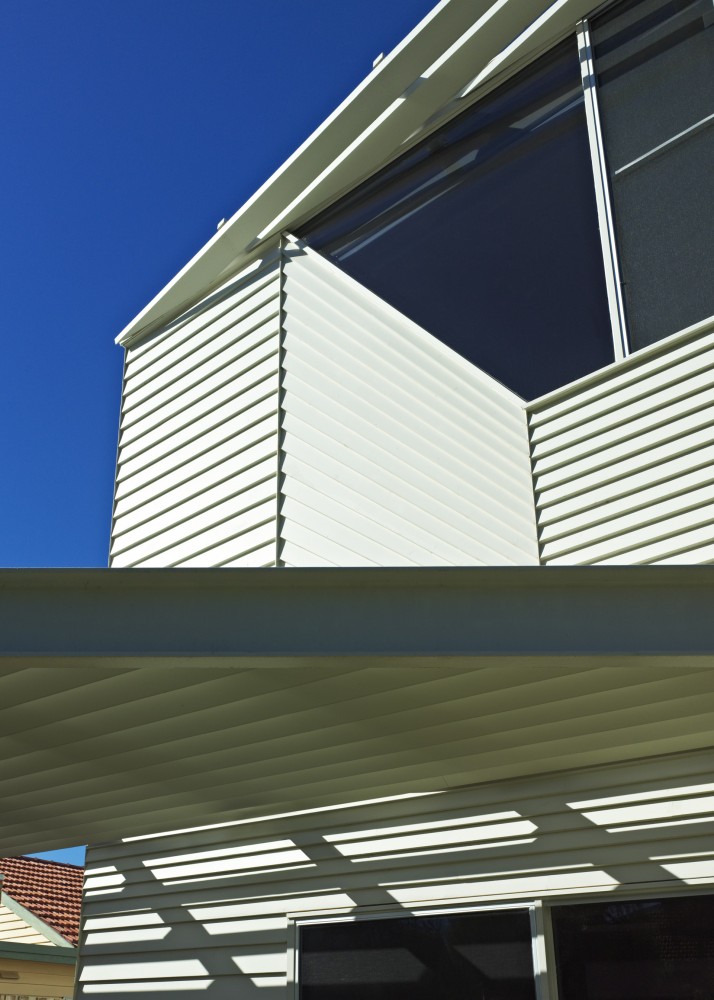 The budget was modest, reinforcing the need to maintain as much of the existing structure and materials as possible. Existing and new spaces were to remain flexible as either studies, bedrooms or living spaces, varying in use as the dynamics of the family changes as the children grow and needs vary. 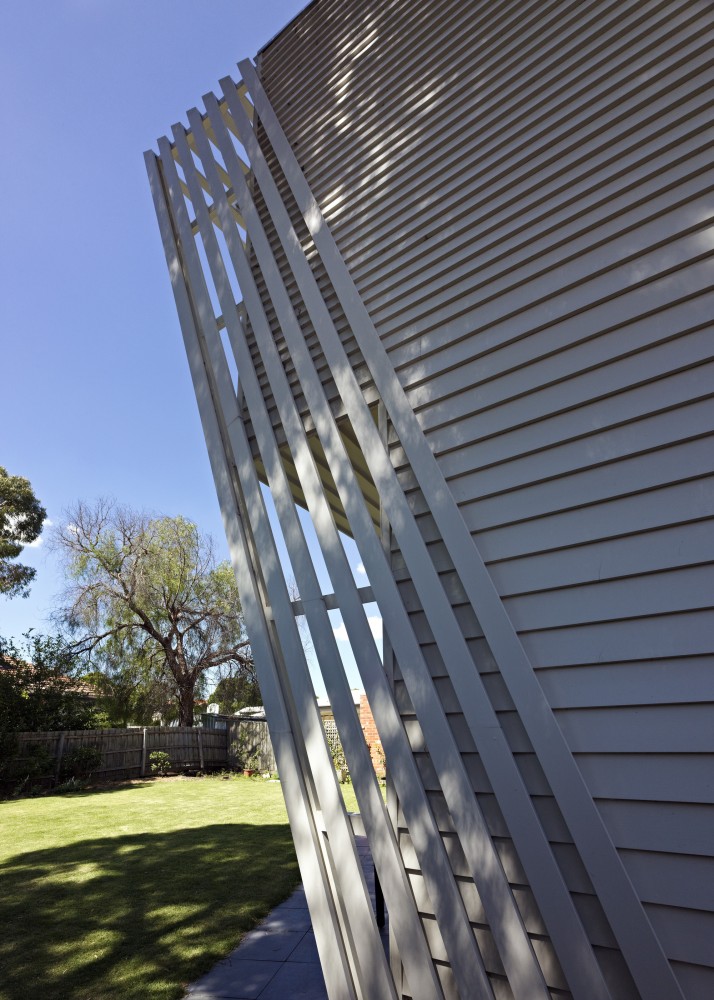 Retaining the existing building was a key consideration for both economical and philosophical reasons. The new extension was to have minimal visual impact from the street, while offering a surprisingly contemporary expression from within the private domain. 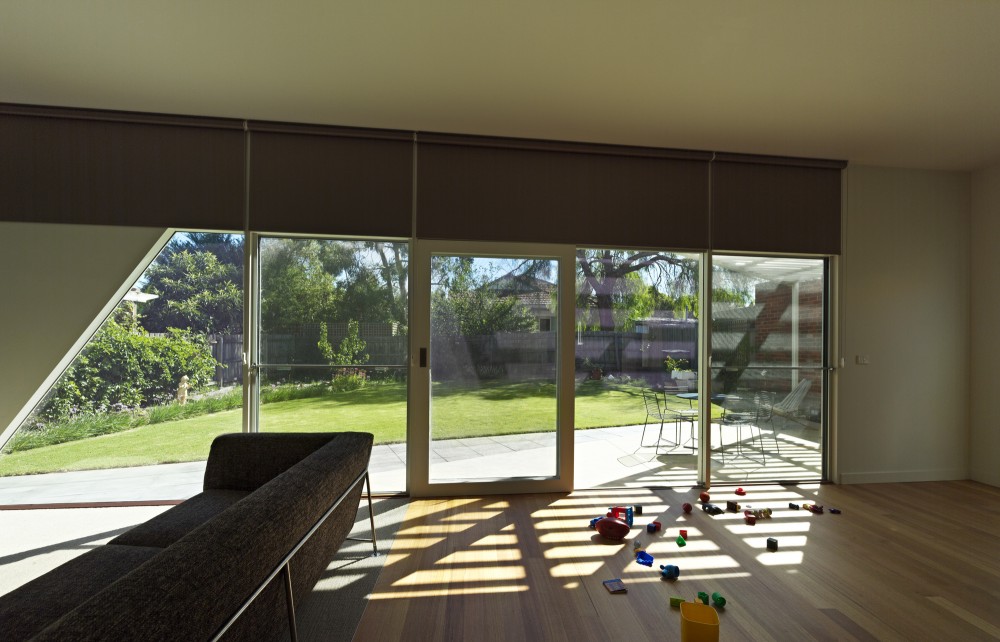 The planning of the building allows the family to live downstairs at this stage, however as the family grows and the children get older, the first floor extension provides the family with future flexibility with two additional bedrooms, bathroom and living spaces. In the meanwhile the upstairs spaces allow the family to offer hospitality to their extended family and friends many of which live overseas or in the country and often stay for extended periods. 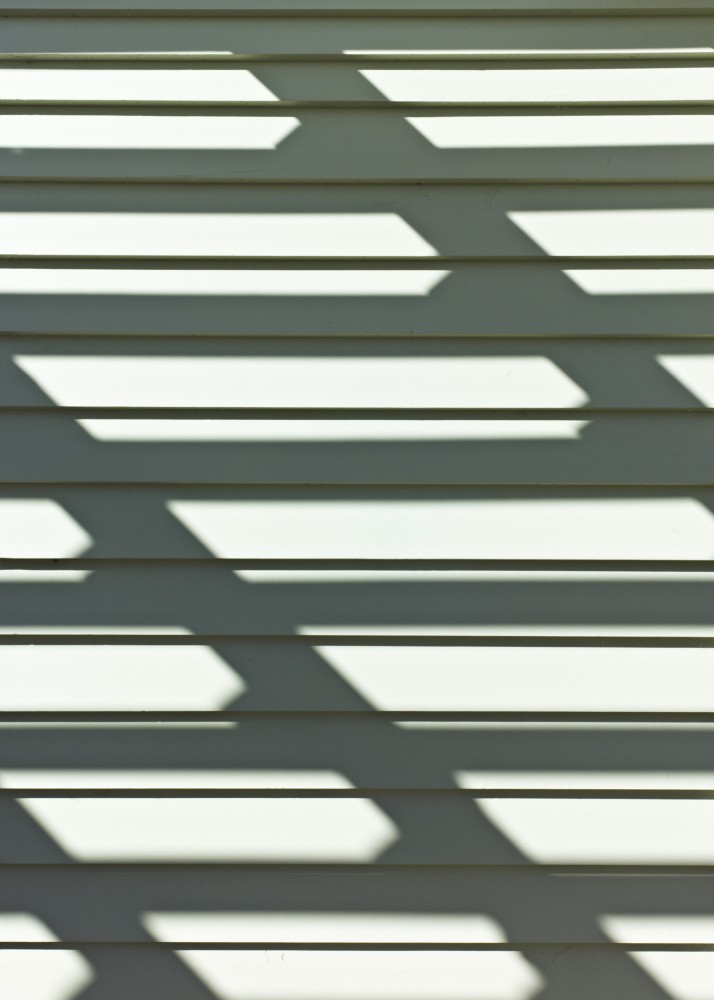 The north facade is the most private and concealed as it faces the backyard. Its stretches the weatherboards capacity to the limit as they weave themselves over the tapering facade, windows and pivoting canopies. The forms and material are inseparable as they sculpt themselves to follow the path of light and shade over the building. Window openings are formed from shadow analyses on the facade, while the louvered canopies pivot and envelope the facade to offer a dynamic landscape of shadows both internally and externally. 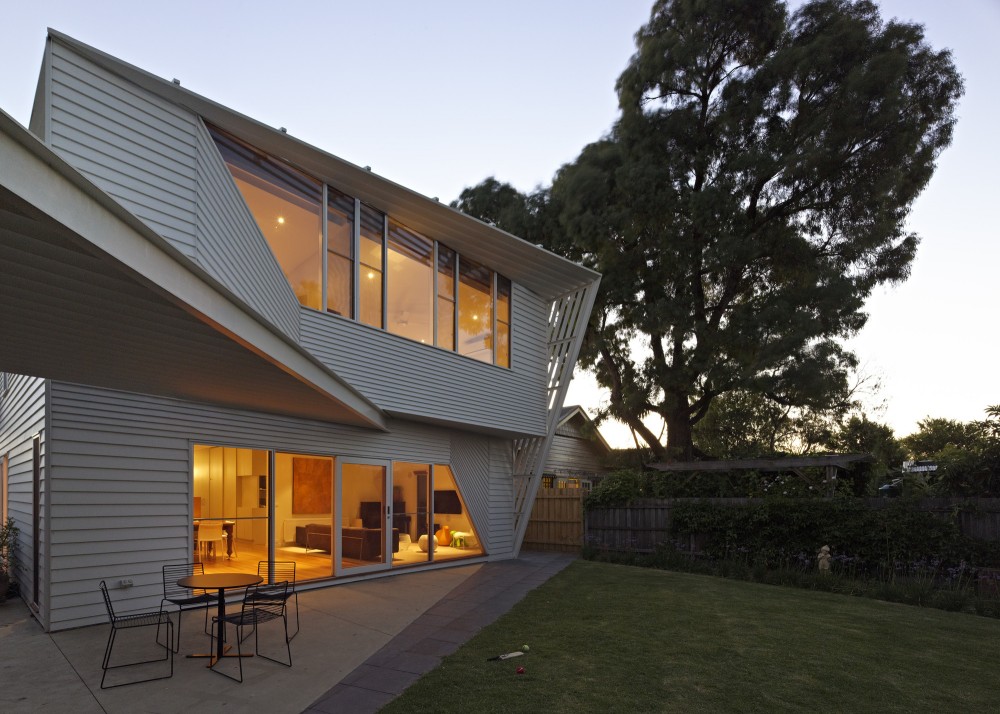 Transition from Old to New

The use of weatherboards allowed a subtle transition from the old to the new, which is also reiterated in the interior. Its neutrality allowed a quiet, almost secretive transition from the existing building at the south, to its modern counterpoint at the north. It is consciously restrained, with the tapered windows offering the only suggestion of while lies beyond. 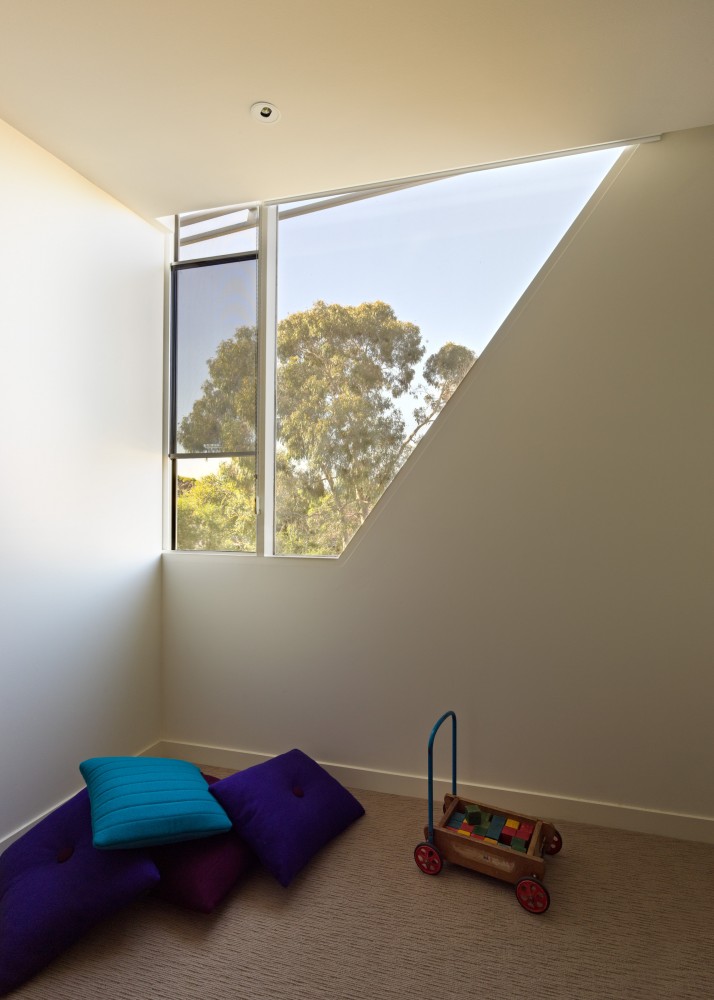 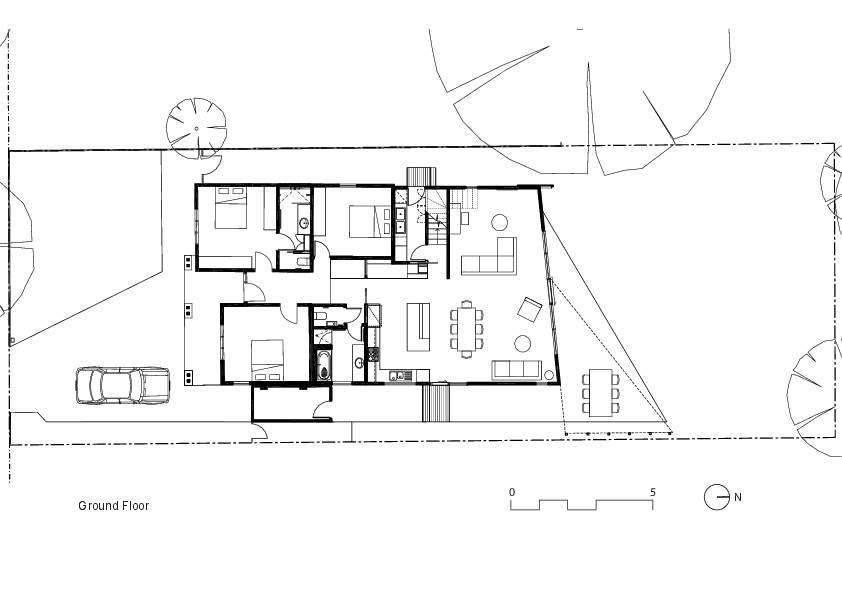 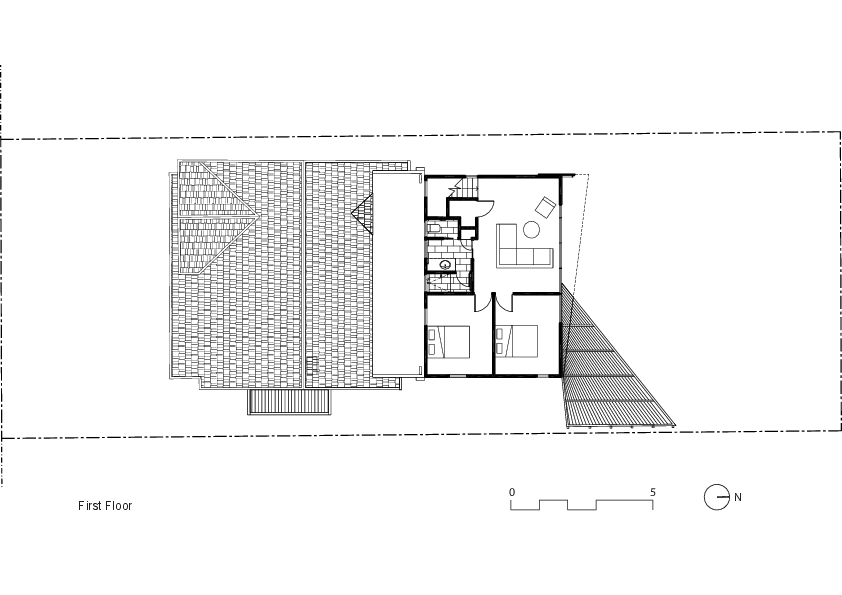 The resulting renovation of Weatherboard House offers a dynamic array of spaces for the family to suit their varying needs, while the use of the weatherboards allows an architectural response which both defers to the heritage of the building while offering contemporary expression of its current occupants.