MAMIL haters, beware. Bike House by FMD Architects is designed for a family of four bikes-lovers who have foregone a second family car for a two-wheeled alternative. The home is on a small 300m2 suburban block in south east Melbourne, so the architects happily did away with the standard two-car garage in favour of a more space efficient plan on the tight site. 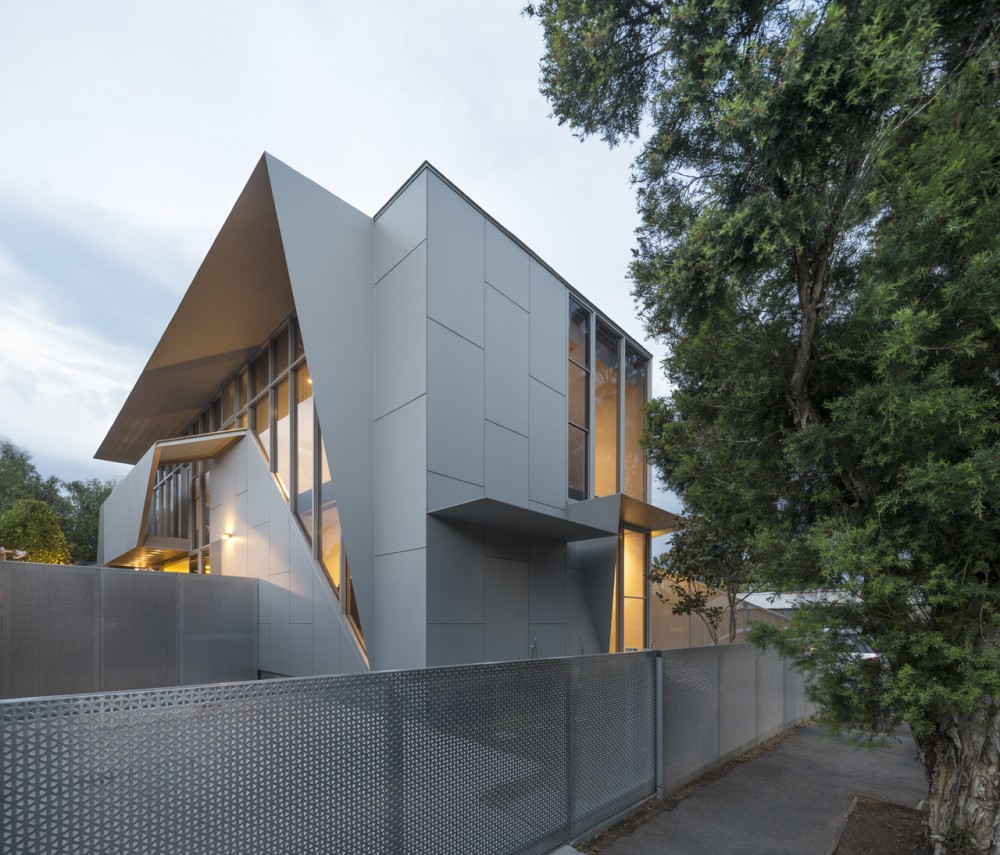 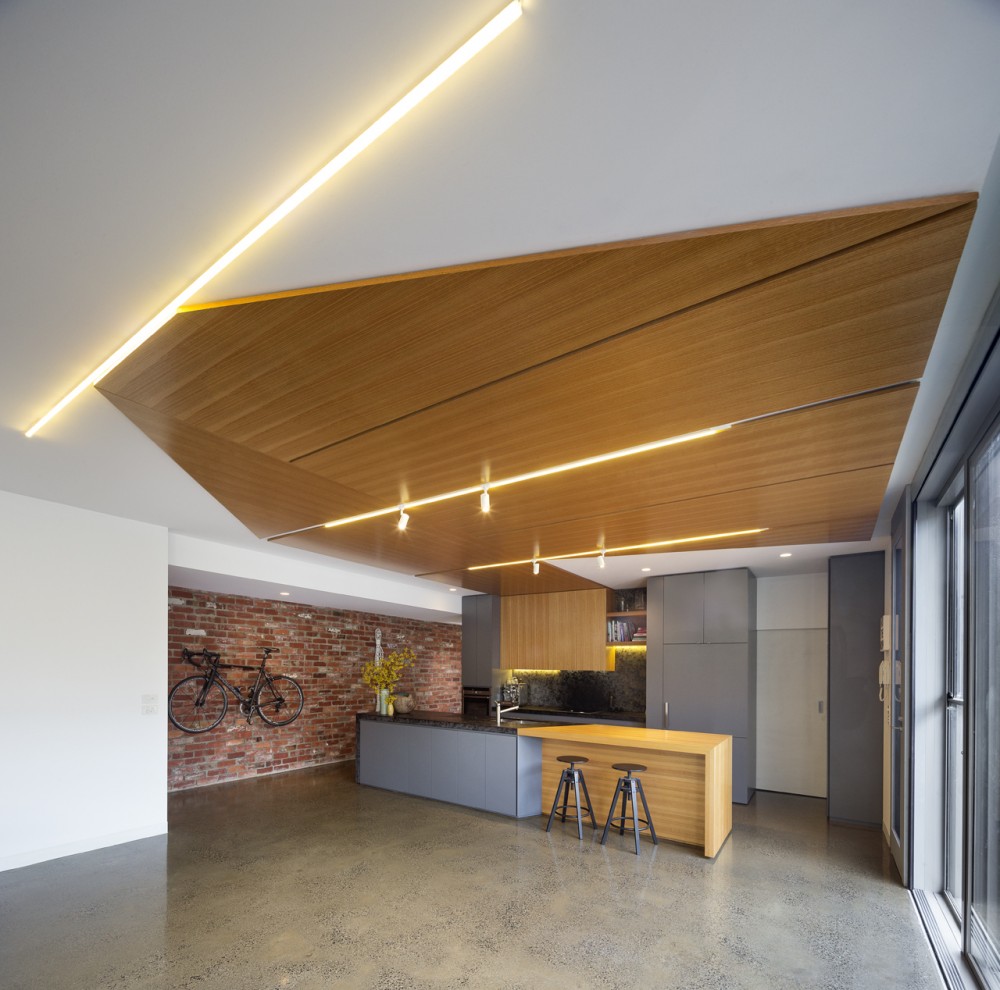 The brief was to design a new dwelling to accommodate a family of four while also including flexible spaces which can change as the children grow and the needs change. A collection of bikes also needed to be accommodated internally and externally as these are a major form of transport for the family. The location of the home is a pleasant bike ride away from everything the family need day-to-day — the car mostly stays in the garage. 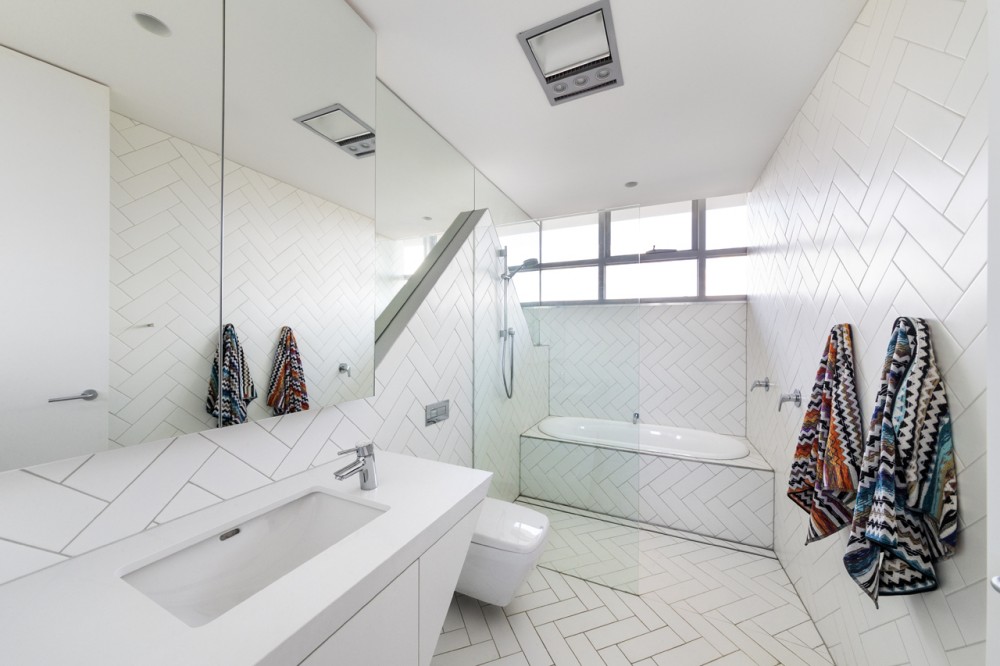 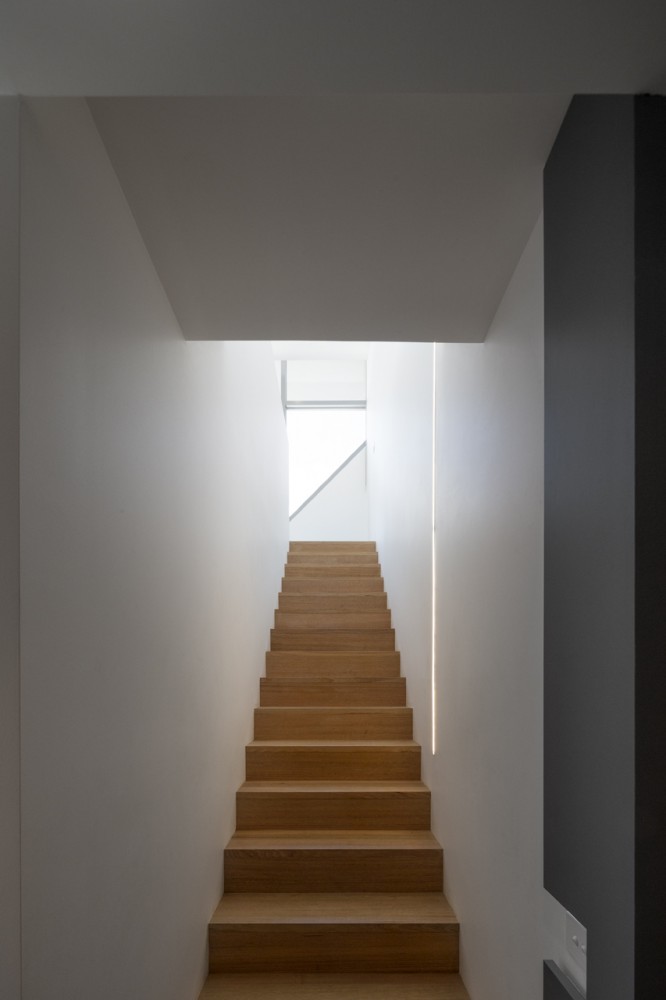 The budget was very tight so the building areas were kept as compact as possible, and simple cost effective materials used throughout. A two-storey structure was designed to minimise the building footprint and maximise the amount of garden space. 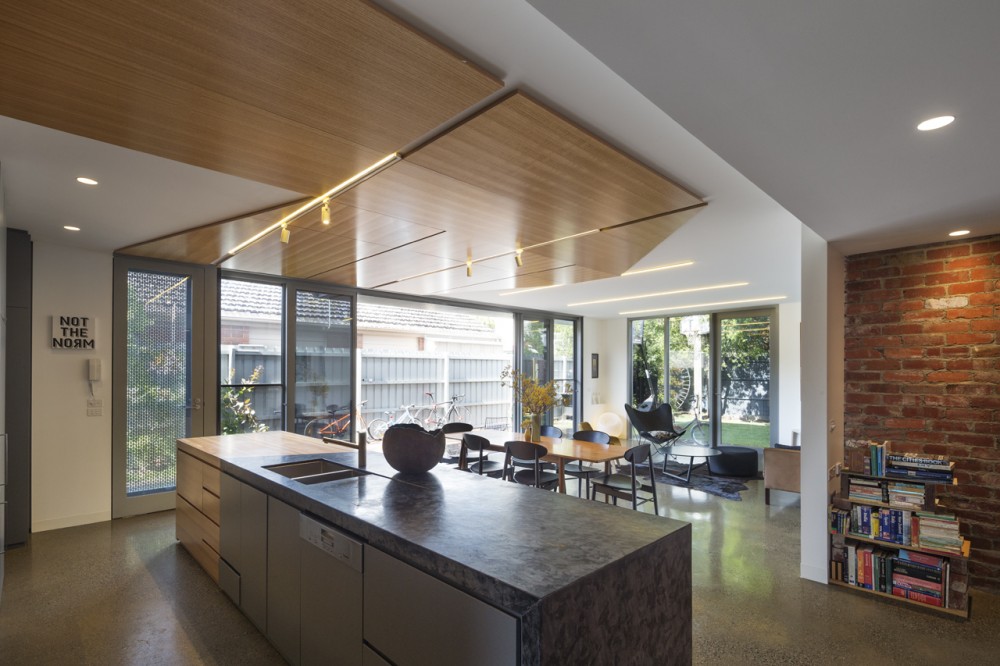 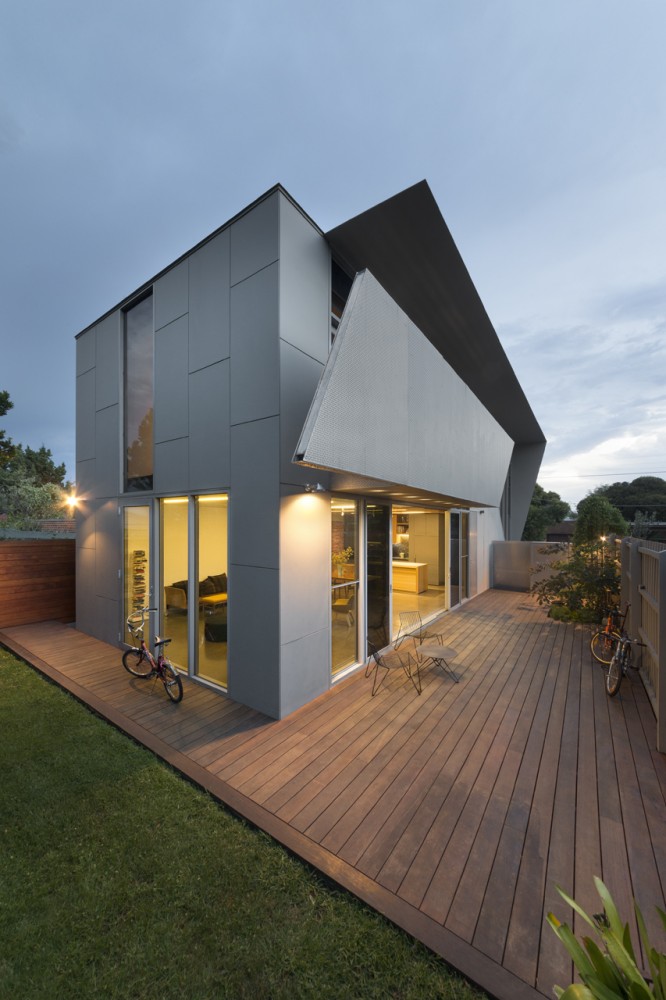 The strategy was to design a simple cement sheet box with elements which folded out of it to create shading devices and privacy screens where required. The fence unravels itself from the building, folding down from the entry canopy onto the street then winding around to conceal the bin enclosure. Triangular perforations in the fence aim to deter the local graffiti artists as well as allowing light to penetrate. This material is also used as a privacy screen on the first floor to prevent overlooking into neighbours’ properties. 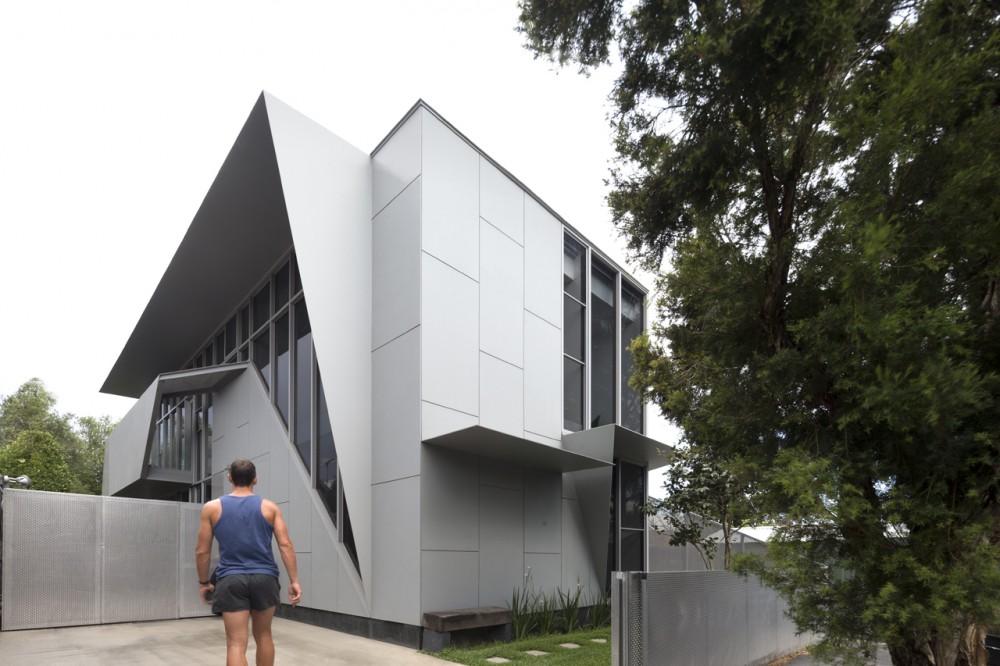 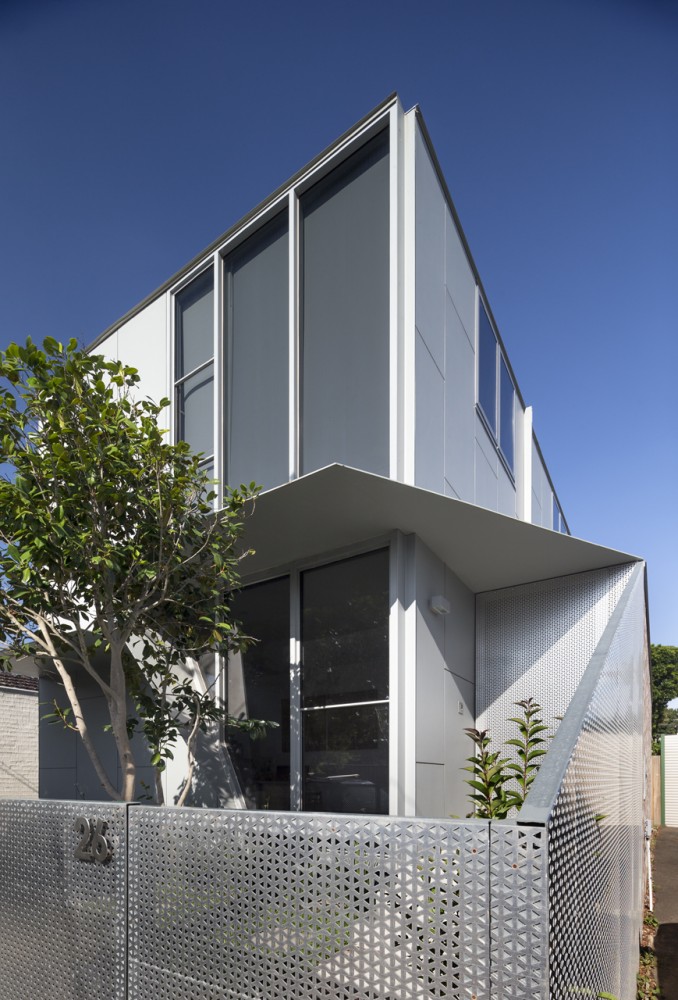 In contrast the southern recycled brick wall offers itself as a canvas for the local graffiti artists which reside in the area. Internally it is left exposed internally and is used to store a series of racing bikes. 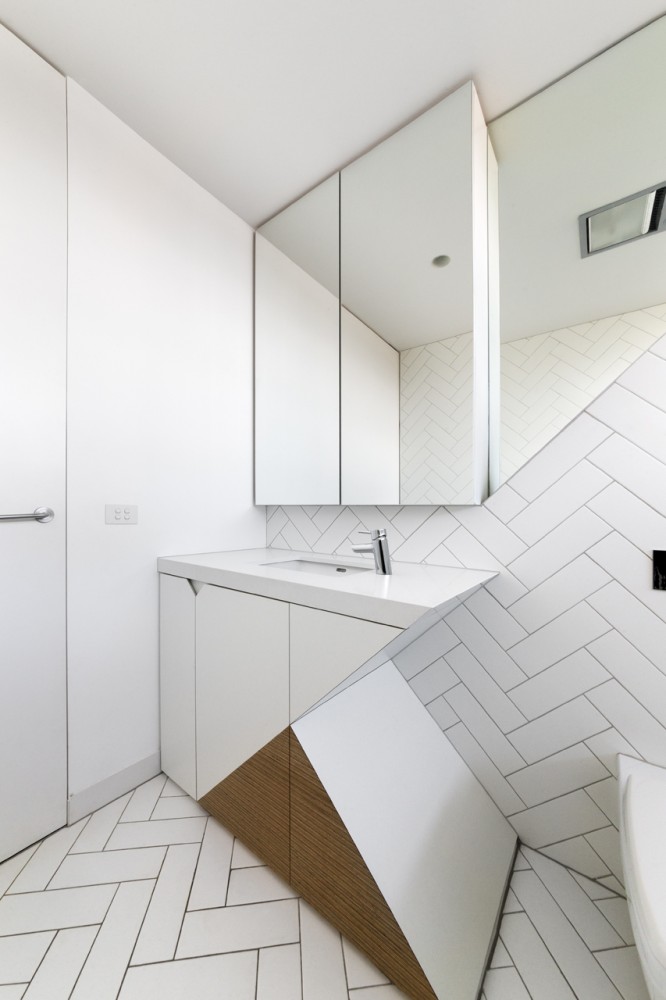 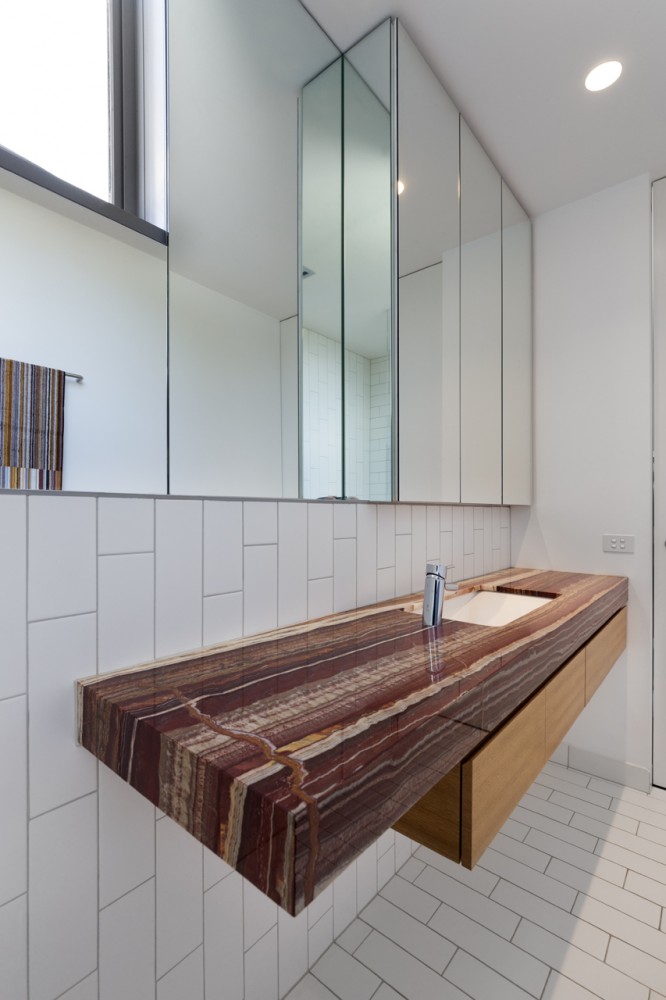 While the appearance from the street is a pristine grey sculpted box, in contrast, the interior is rich with texture and colour, reflecting the active life of its users. A simple palette of exposed brick, concrete slab, local timber, ply and laminate are used internally. The unfolding continues in the interior with the Kitchen ceiling wrapping down to become the cabinetry. Stone and timber are spliced together, imitating shadows cast by the canopies externally. Spaces fold and twist over themselves, in both the joinery and tiling, responding to the stretching and folding occurring on the façade. 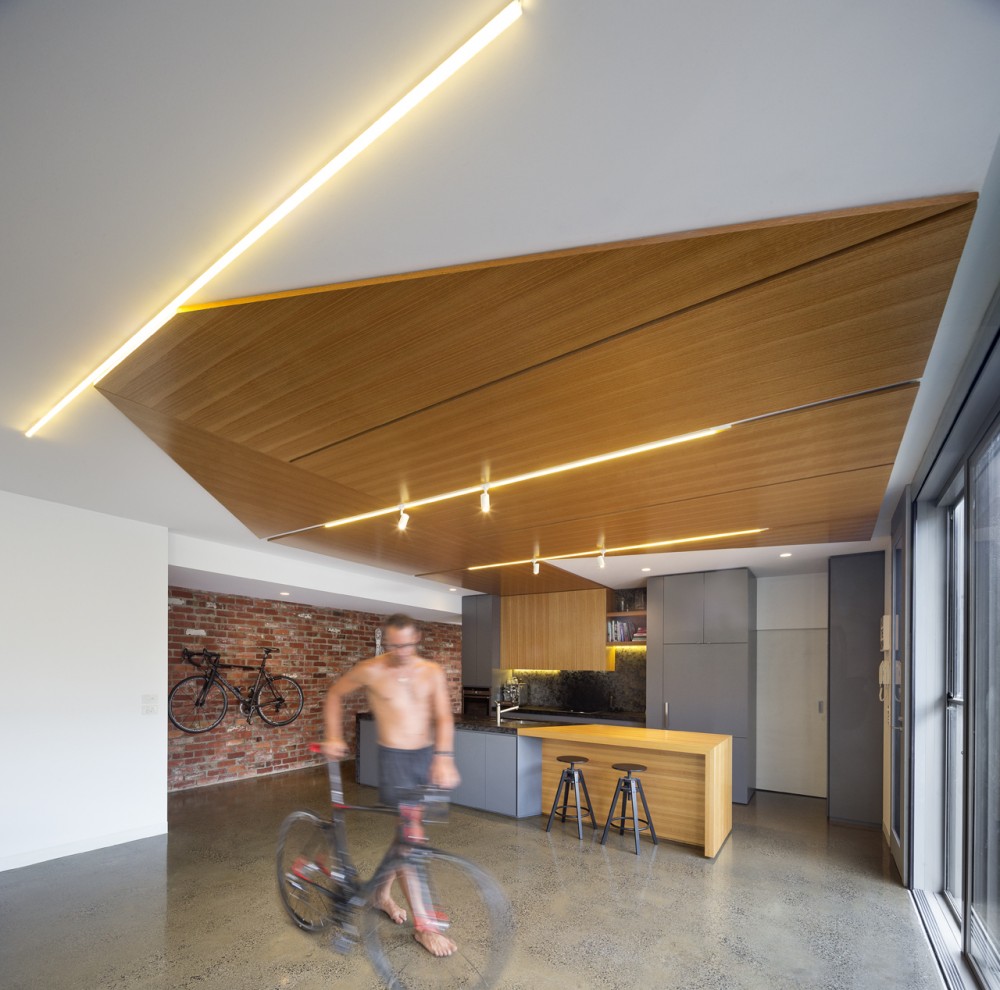 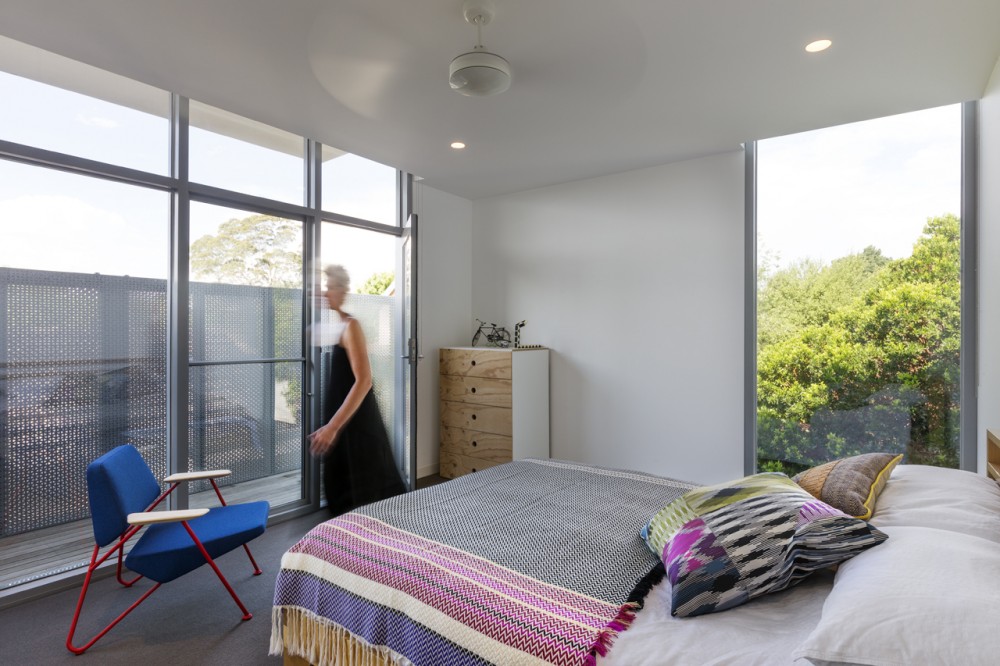 Along with the bedrooms and living areas, three additional spaces were incorporated as flexible zones. Downstairs, one can be used as a separate lounge or bedroom, while the first floor space can also be used as a play space or study, depending on the needs of the family at different times. A home office is also incorporated at the end of the brick corridor space, which can be used by either the parent working from home or as the children's computer area. A shed is carefully concealed on the south of the building, accommodating more bikes and tools for bike builds. 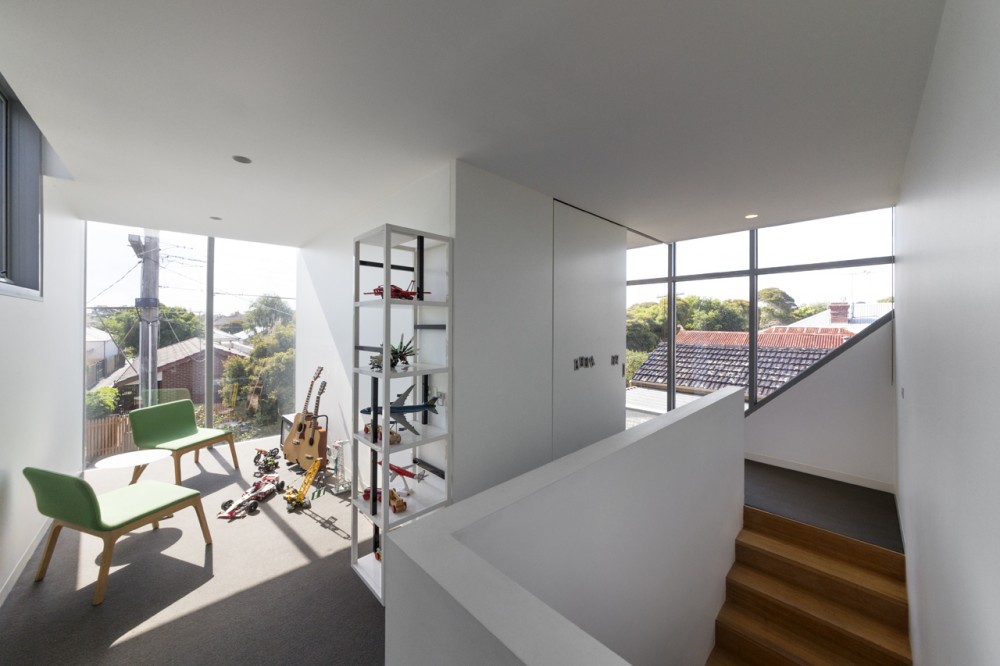 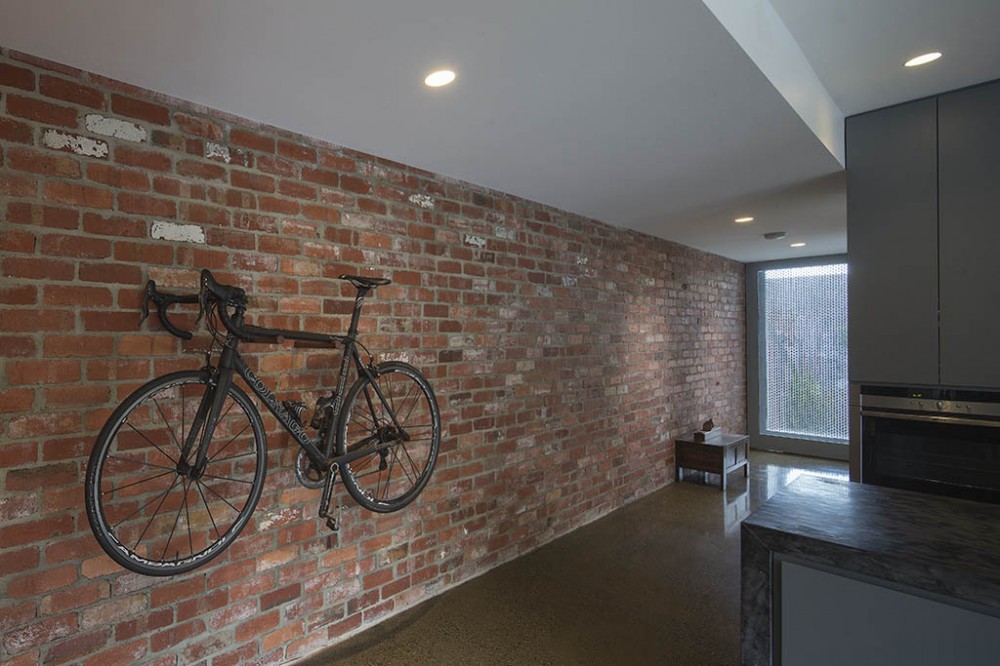 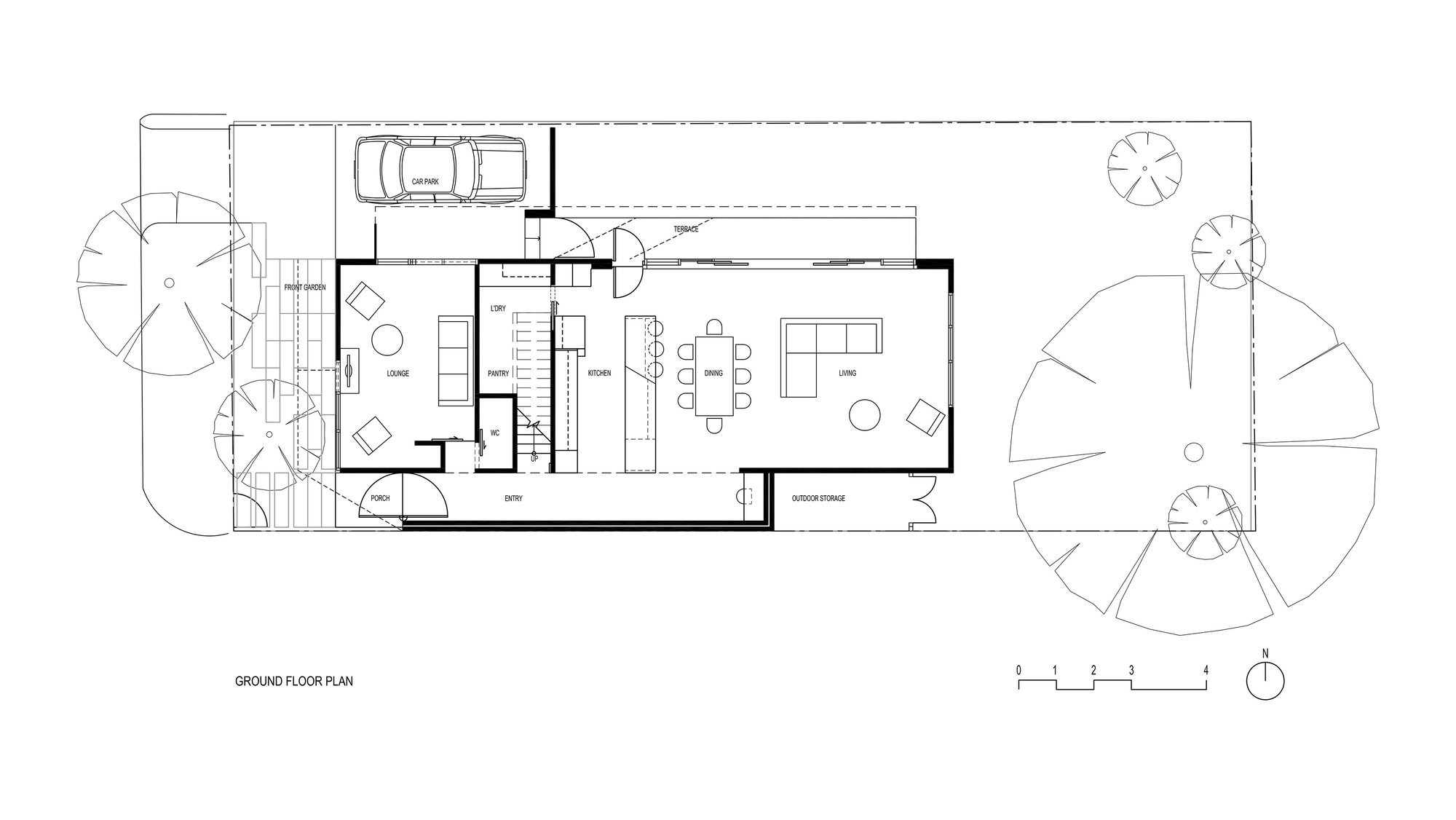 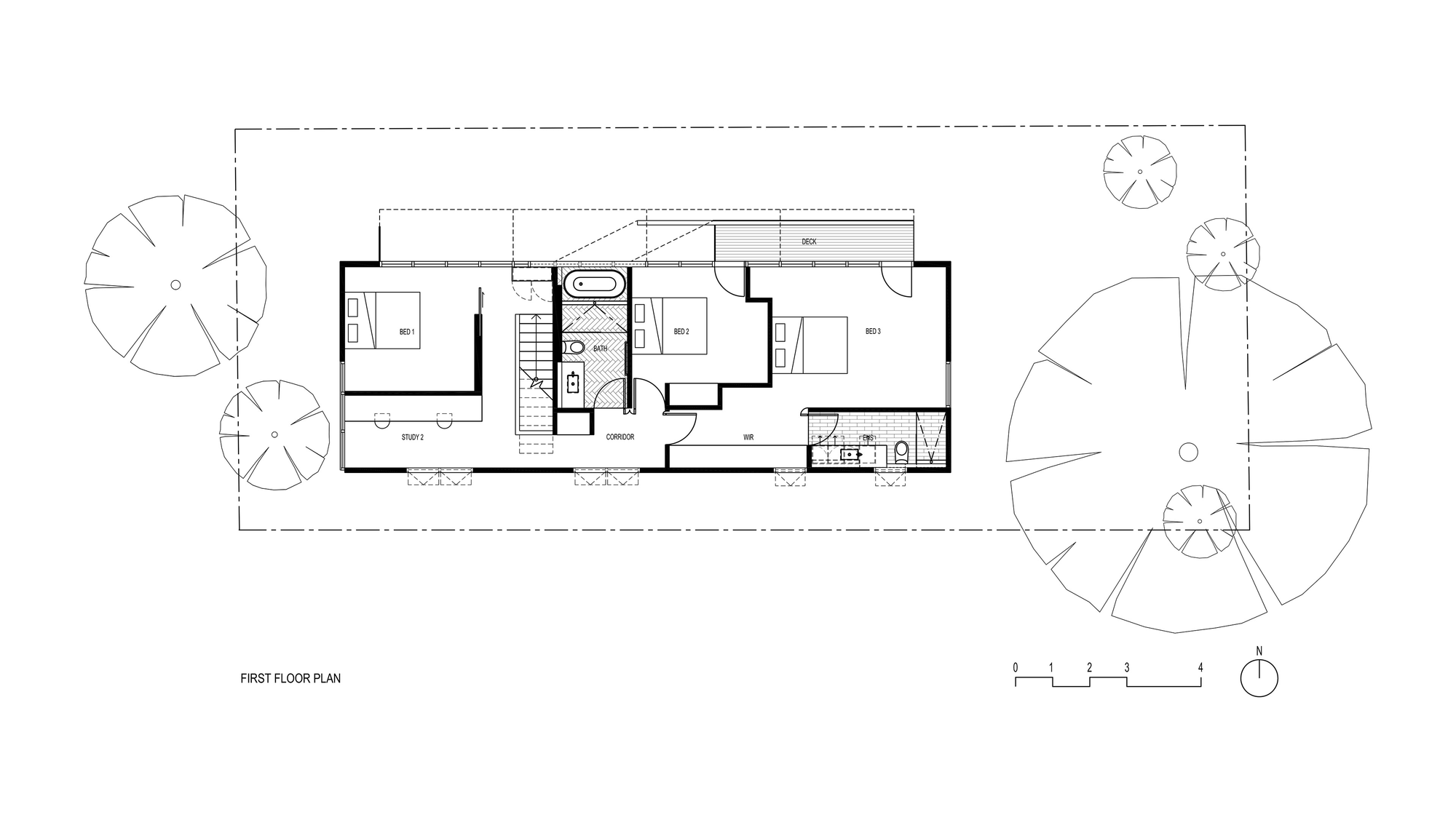 Every millimetre of Bike House has a purpose, although the spaces are flexible enough to change as the family dynamics change over time. The house is a sign of Melbourne's growing bike culture — more and more commuters are choosing a bike over the car every day. And in my opinion, the fewer two-car garages we see, the better!