How Can You Fit a Family of Six in 140 Square Metres?

As our houses get bigger (they're already the biggest in the world), and our families get smaller, it's becoming increasingly difficult to imagine how you could fit a family of six in a three bedroom home. We've become accustomed to all that space. But is it really necessary? Buck&simple show us it's not with this compact yet considered home in Sydney. 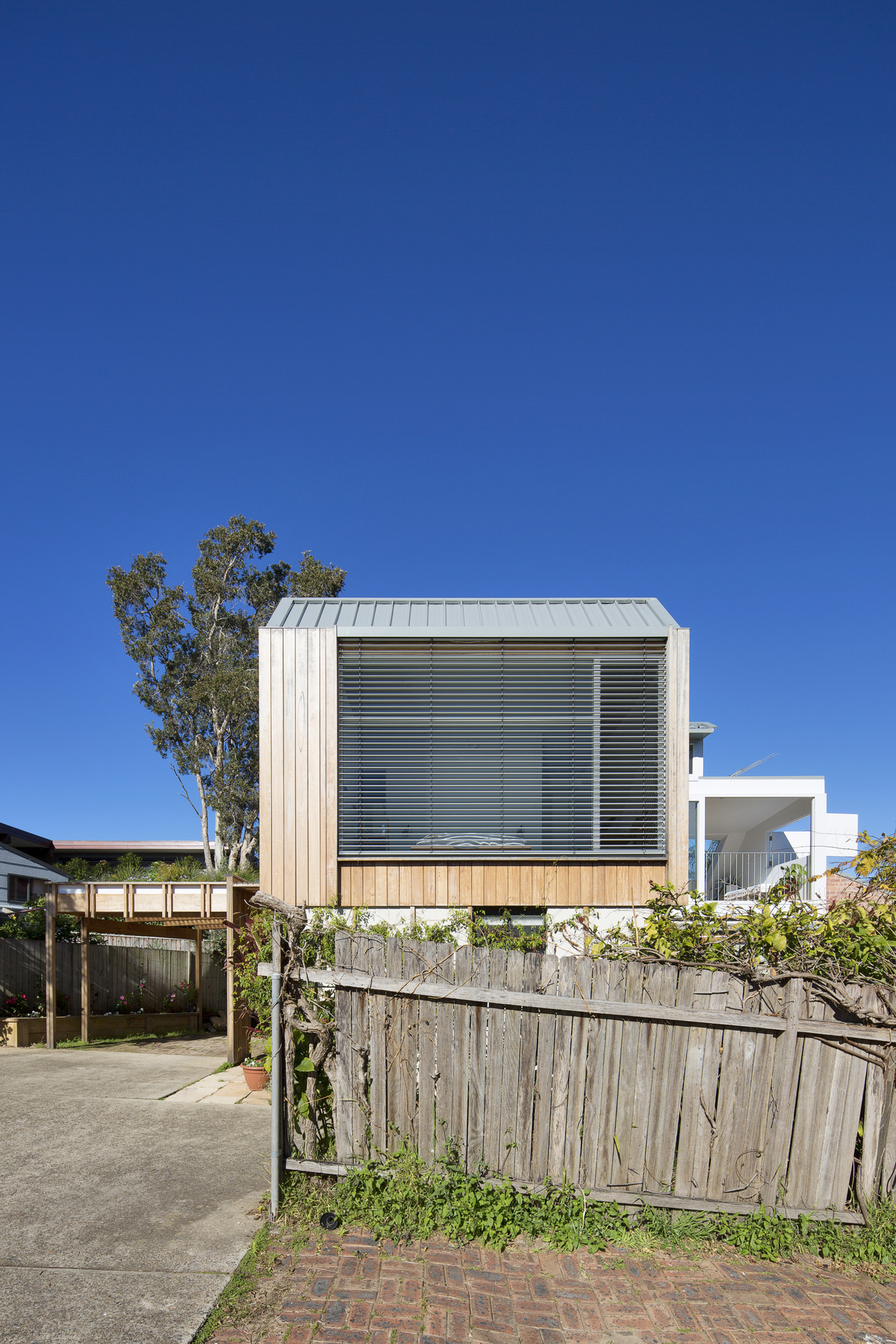 What started out as a modest one bedroom brick veneer cottage has been transformed into a light-filled and environmentally responsive home for a family of six. Using the original brickwork as a podium, the architects added a beautiful timber box on top to give the owners a three bedroom, three bathroom home. Casa Crisp is now a modern family home that enjoys plenty of sunlight and breathes naturally. With the help of thermal mass in the living areas, the home doesn't need artificial heating or cooling at all. It's all natural, baby. 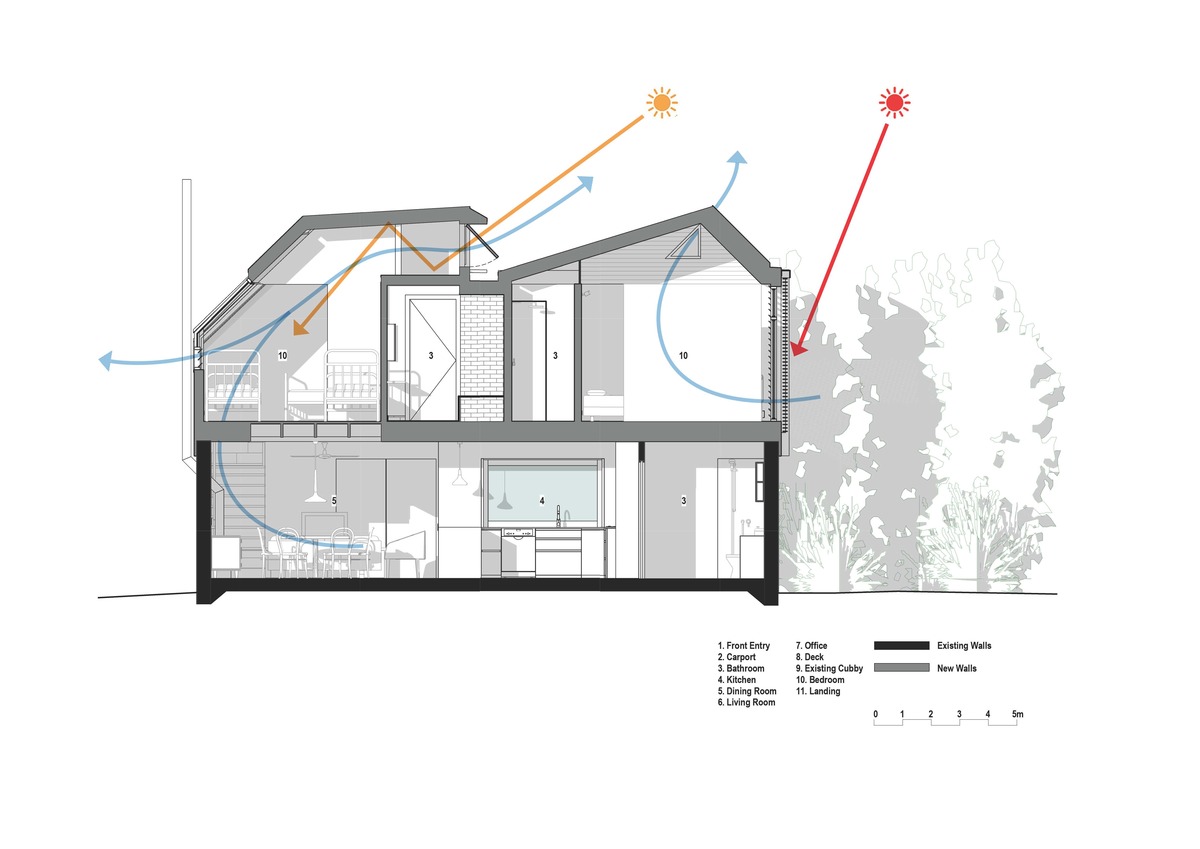 The architects also dealt with a difficult, battle-axe block. "With a tight 180 square metres of usable land, the minimal outdoor area is compensated by a short walk to the sand at Warriewood Beach", explains Peter Ahern of Buck&simple. While the block was north-facing (win), it also has eight neighbouring properties. If you've ever had an (un)neighbourly dispute, you'll understand how tough it must be for the architect to design an addition with so many adjoining properties. "The modest envelope ensured every nook has been considered and formed into functional space in order to create variation in the space and best utilise the site", says Peter.

All that trouble was worth it. From the first level, there are multiple unobstructed views to enjoy. Even a glimpse of the ocean. The outlooks make the home feel much larger than its 140 square metres. 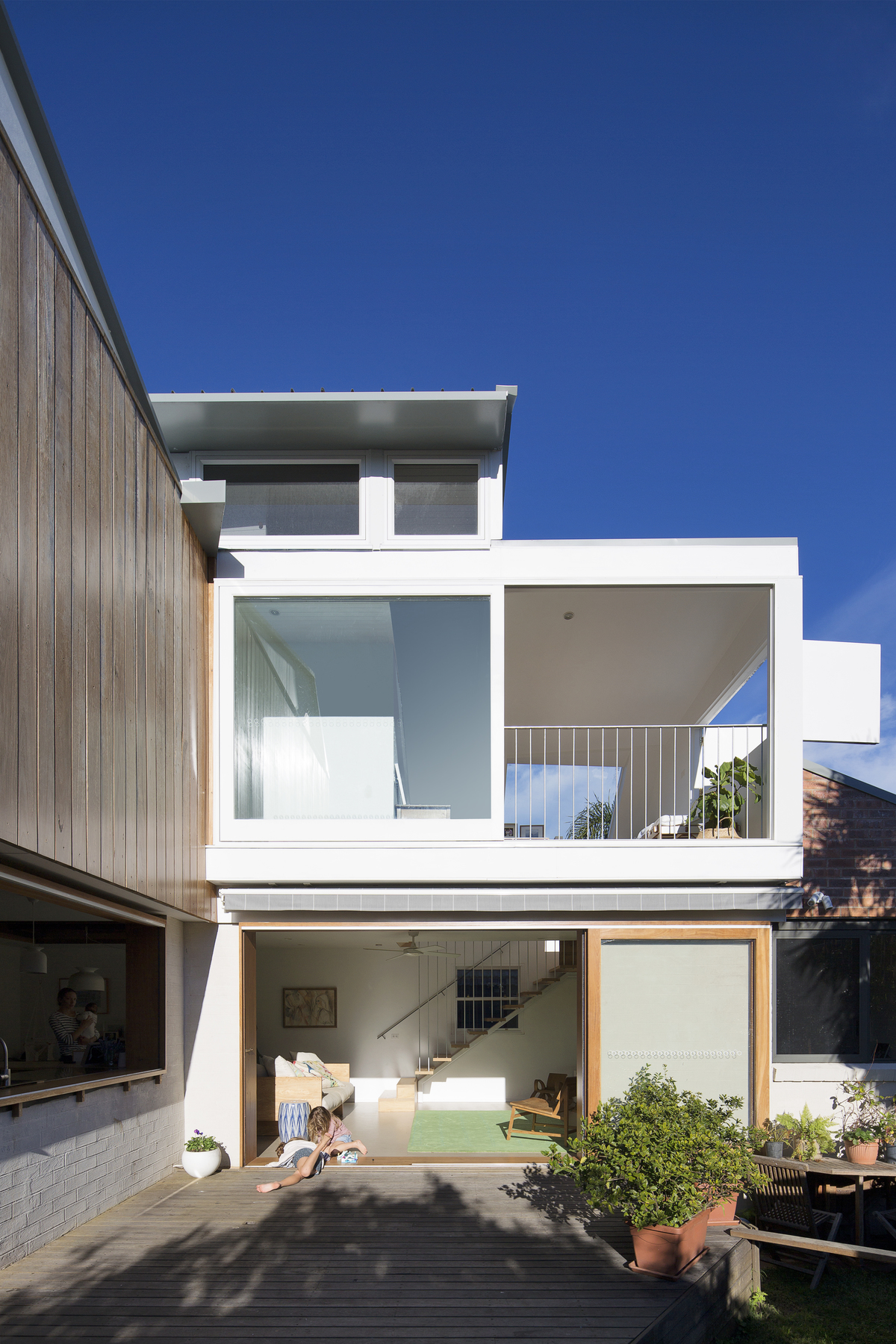 "Blackbutt timber is the principal material for external areas with the first-floor cladding, carport, and entry screening being made out of the locally sourced Australian hardwood. Blackbutt was a natural choice as it grows locally, is fast growing, is naturally termite resistant, and not susceptible to lyctus borers." - Buck&simple

The blackbutt timber cladding works as a rain screen, which means it's laid like decking boards and is ventilated behind. This allows the heat of the sun to dissipate before it gets to the house. The existing brickwork was given a coat of white paint to reflect the sun and avoid overheating. High upstairs windows create a stack effect to draw cool air through the house. These strategies keep the home cool in Sydney's stuffy summers. 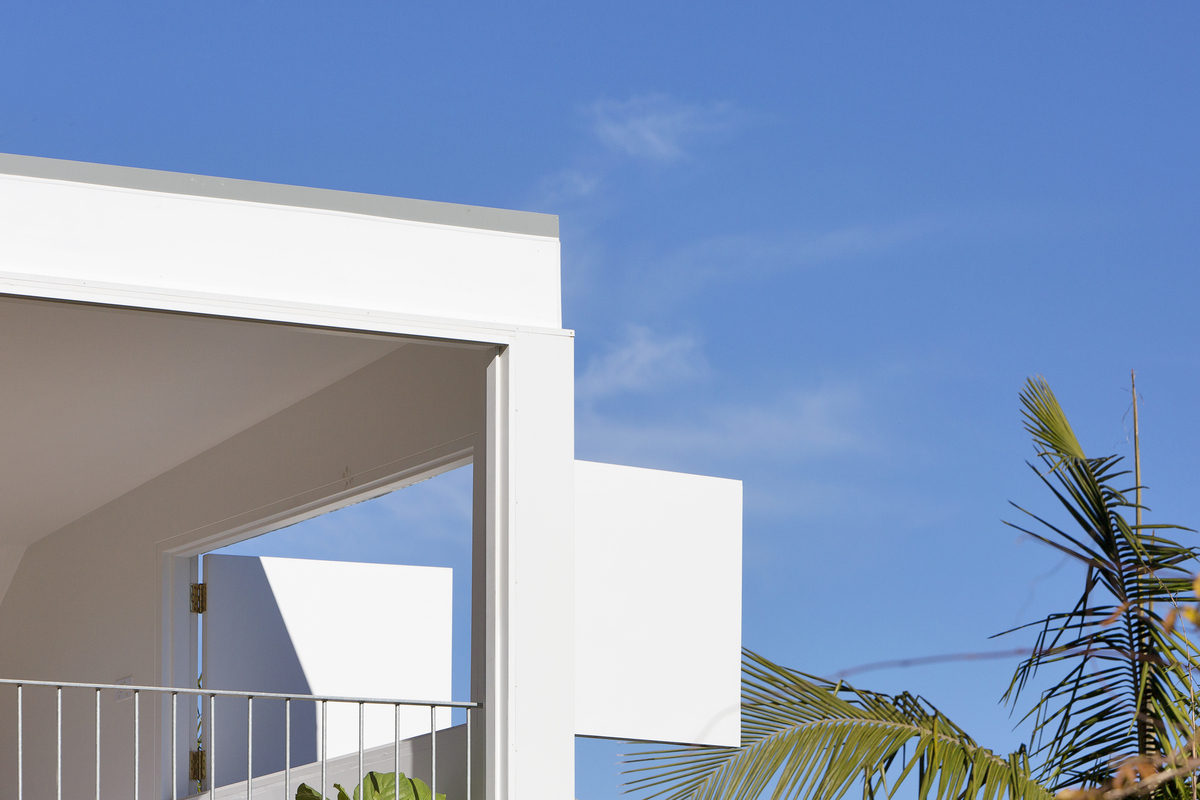 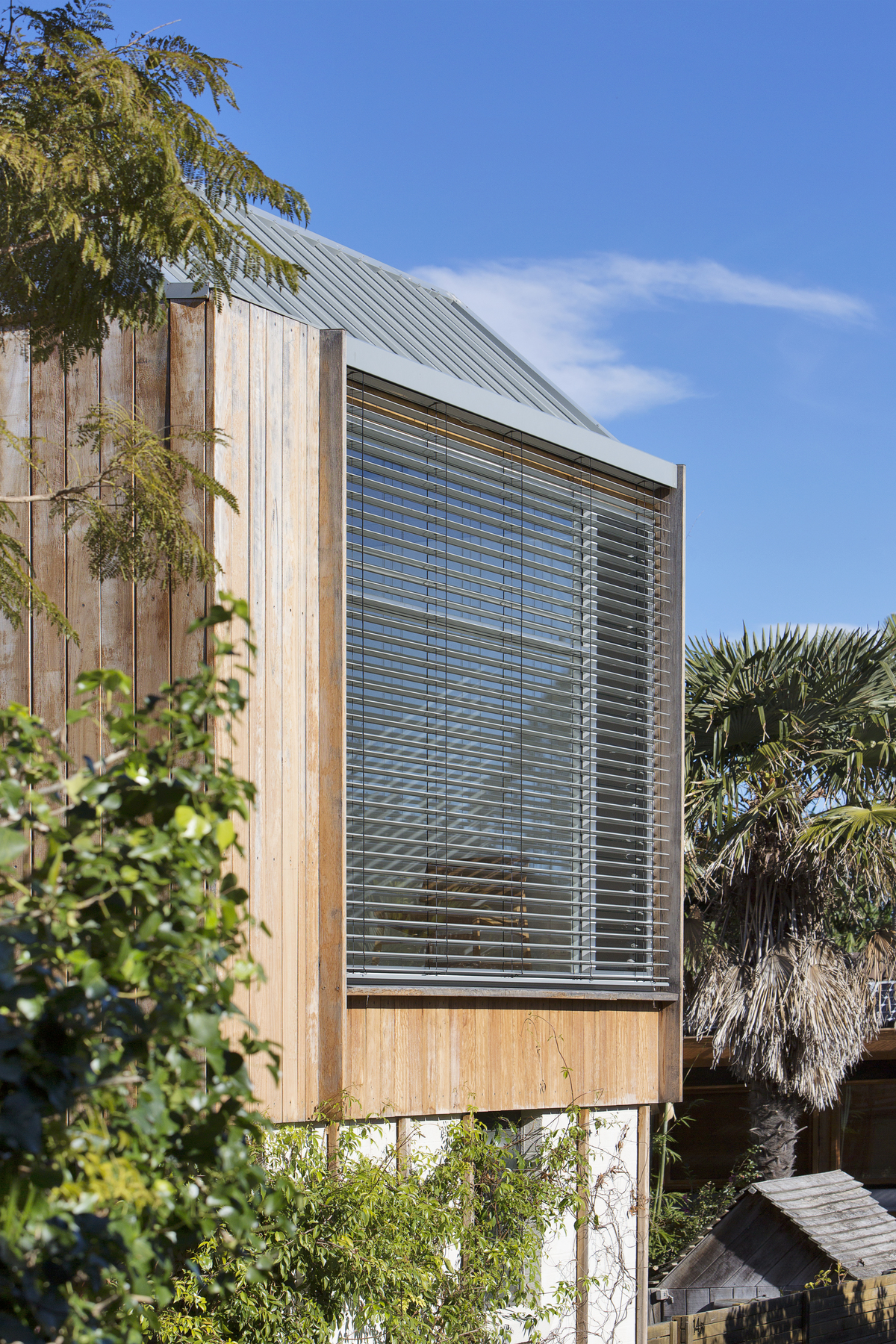 "External adjustable louvres and awnings are positioned over large areas of glazing, allowing the home to be 'trimmed' to the weather conditions like a yacht." - Buck&simple 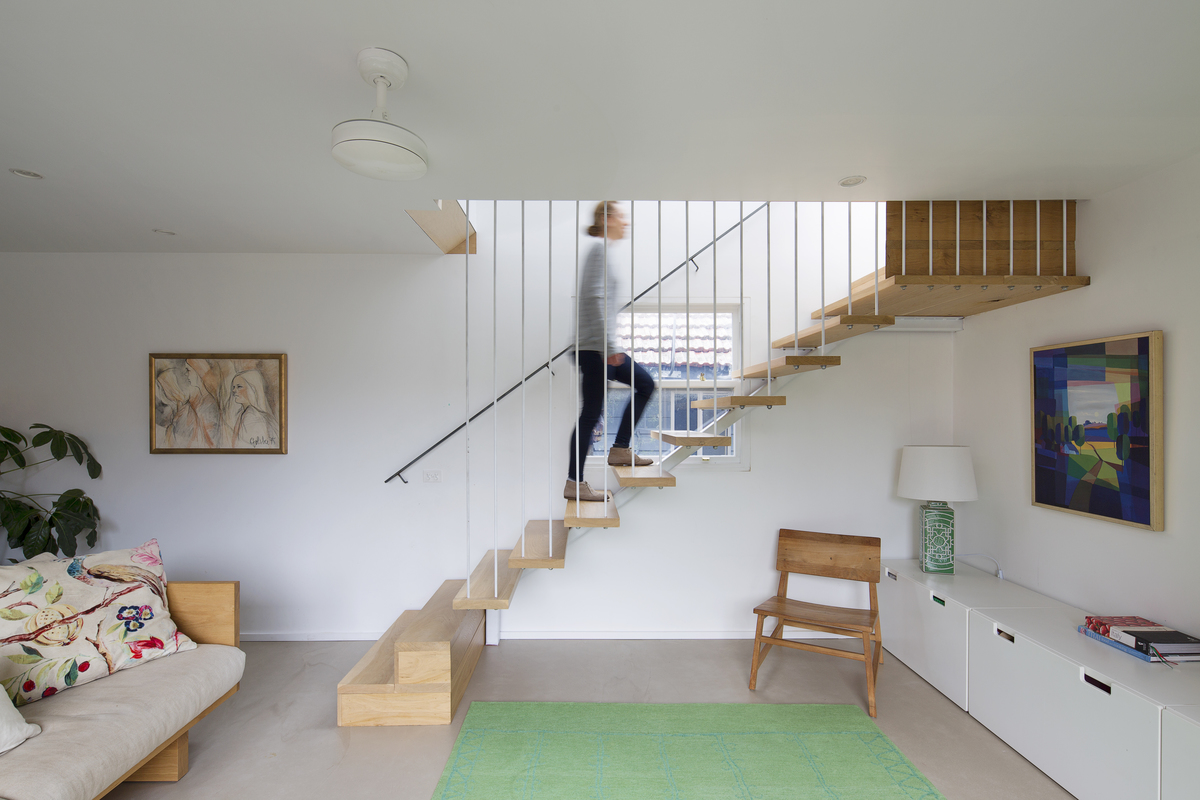 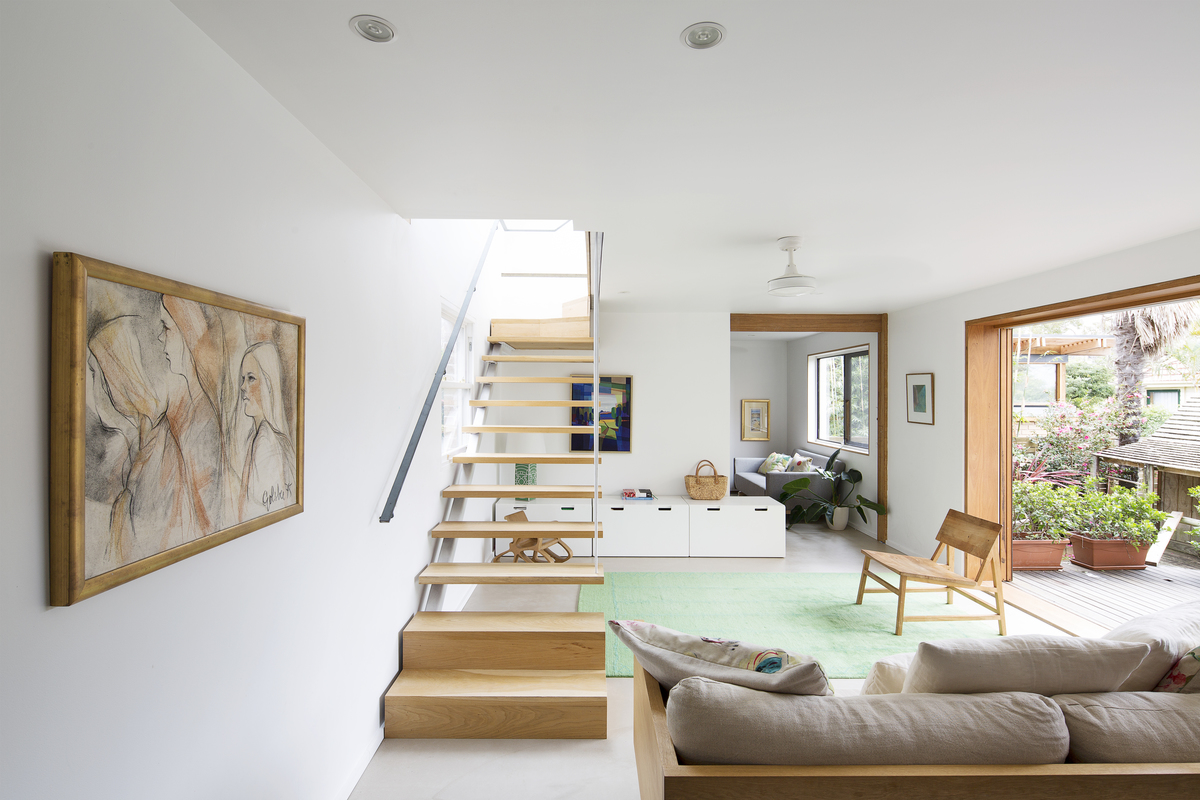 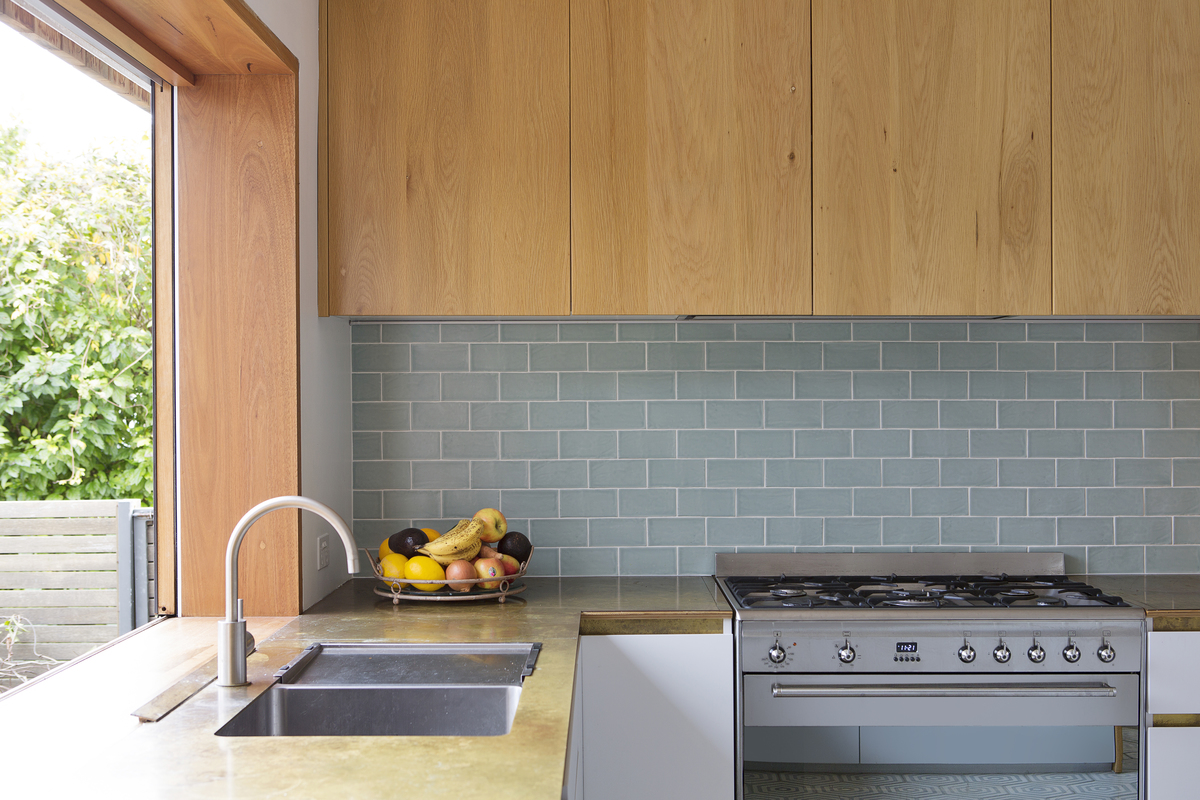 But how do you fit a family of six in a three bedroom? Comfortably, actually. All it takes is a bit of forethought about how the family will use each space, and some functional solutions. In preference of bedrooms, the architects created separate living spaces. An office downstairs has a sliding door to separate it from the main living space if necessary. When open, though, it becomes a semi-private nook to give family members space. 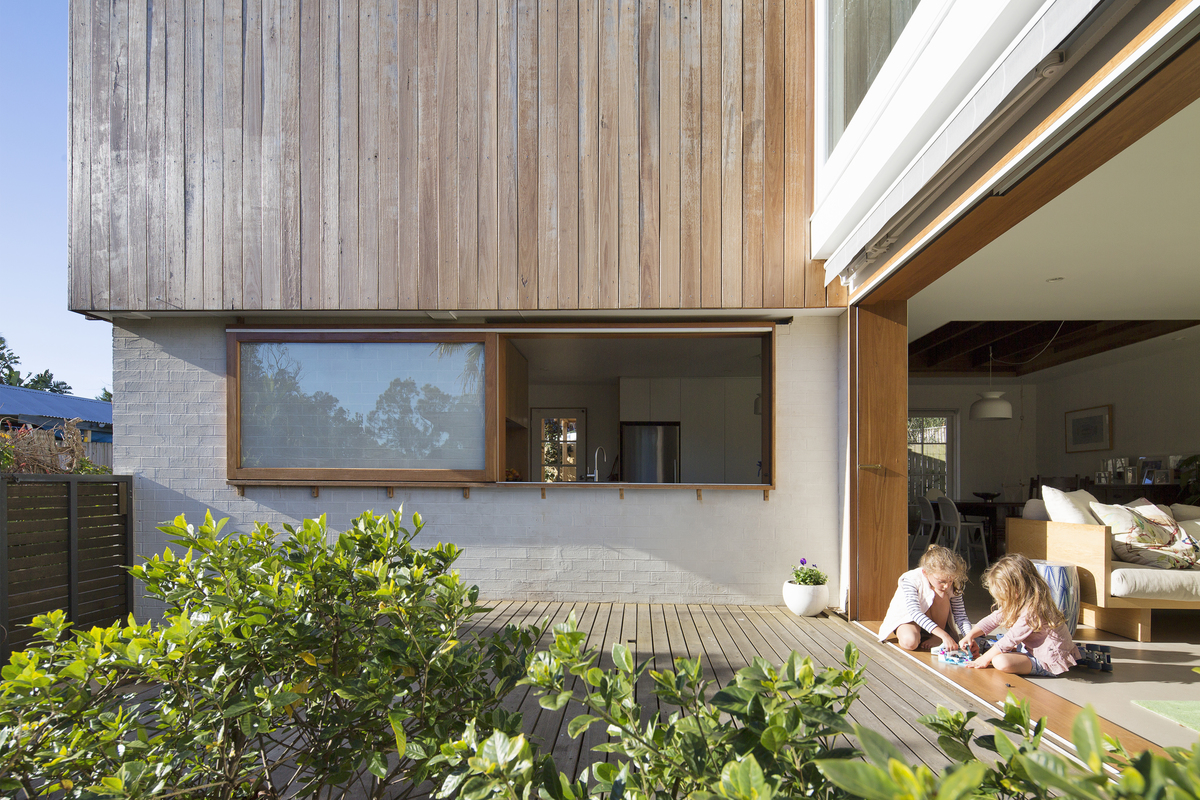 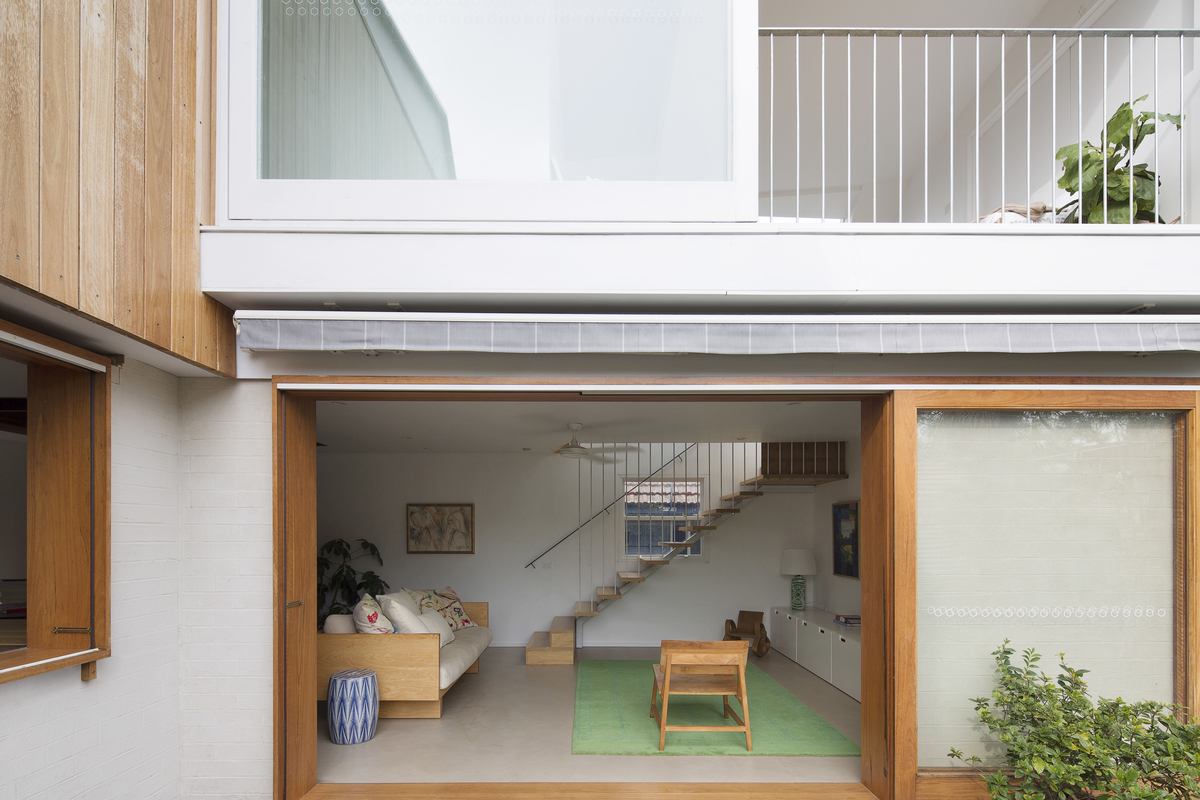 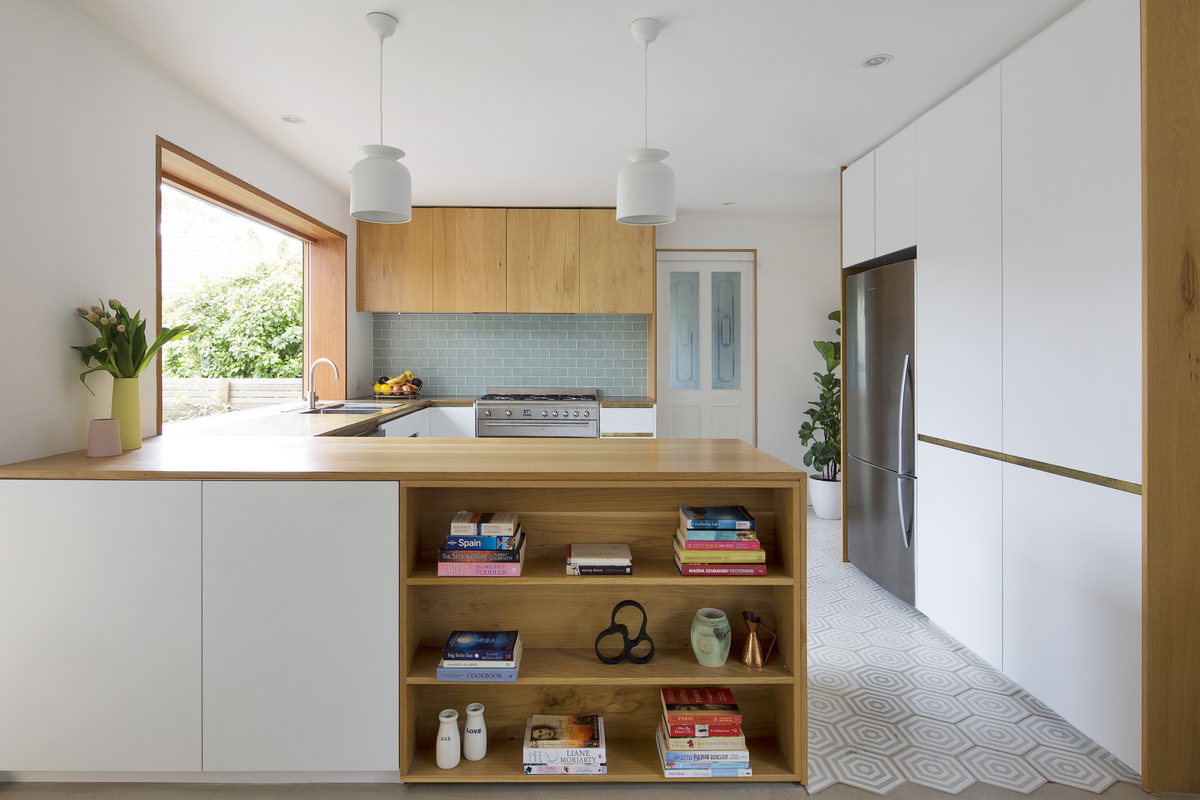 Upstairs, an oversized landing acts as a second living area. This is where you might head for a bit of quiet time away from your annoying brother. Or where the kids hang out when they have friends over. 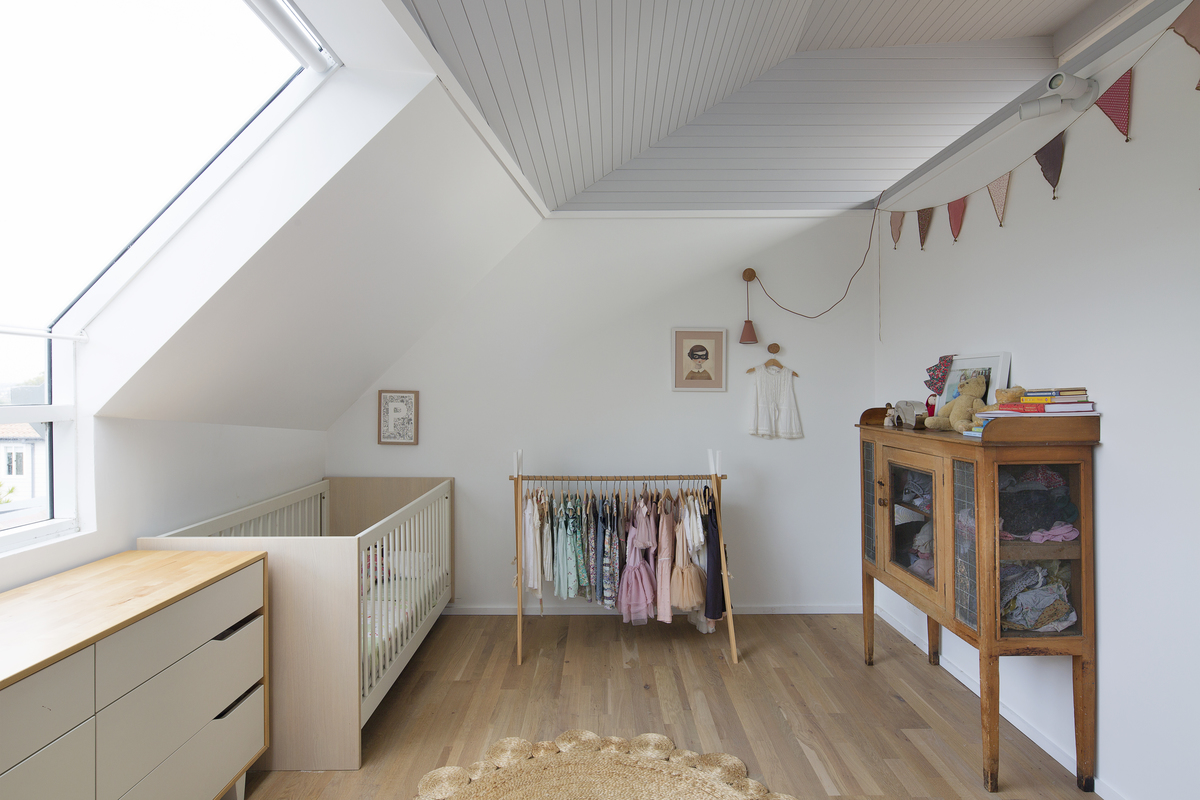 A sliding door between the kids' bedrooms opens to create one large, shared space. This creates a playroom or separate living area for the kids to use. 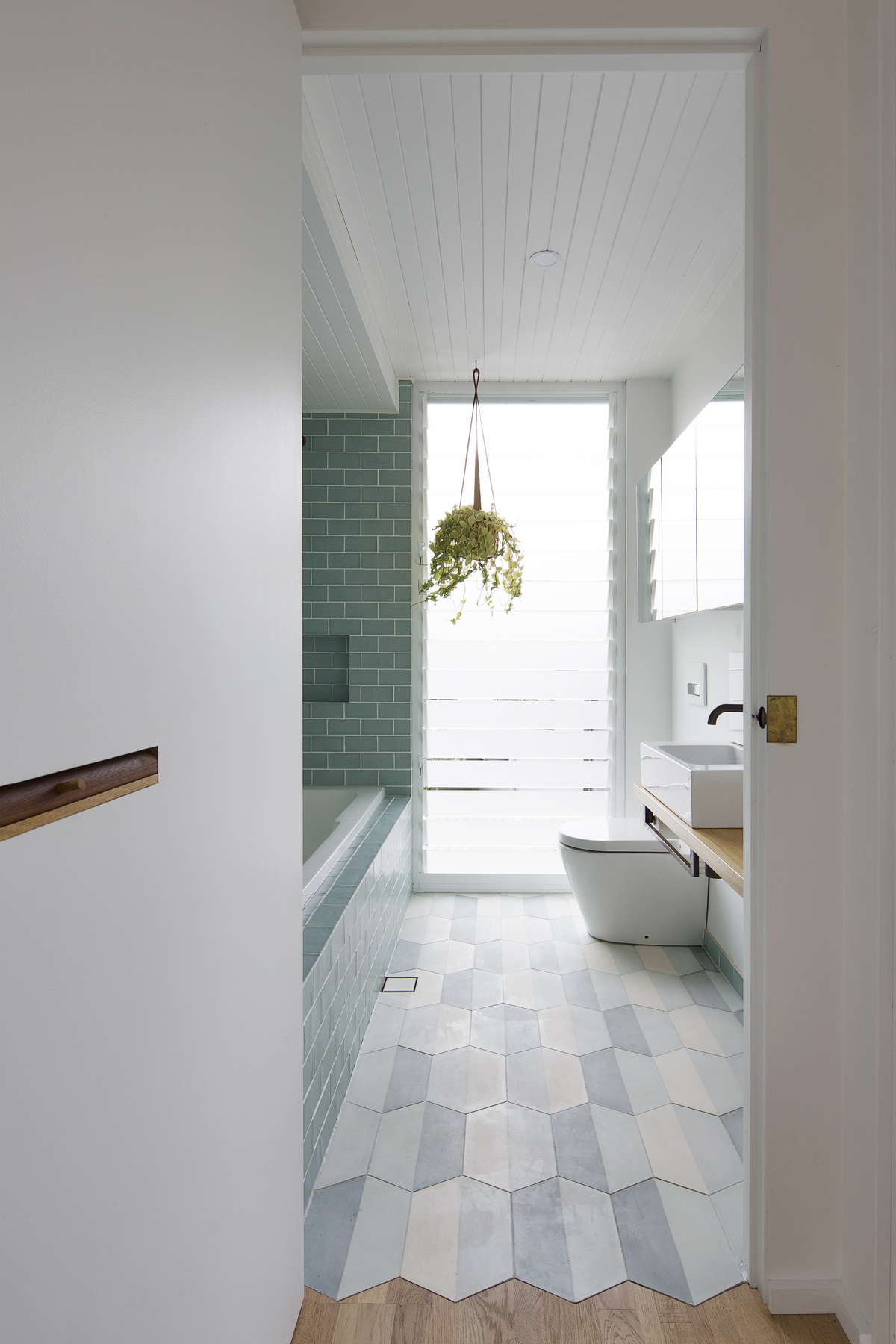 The final strategy to deal with a big family in a compact home? A whole bunch of bathrooms - because no one likes a school morning queue for the shower. 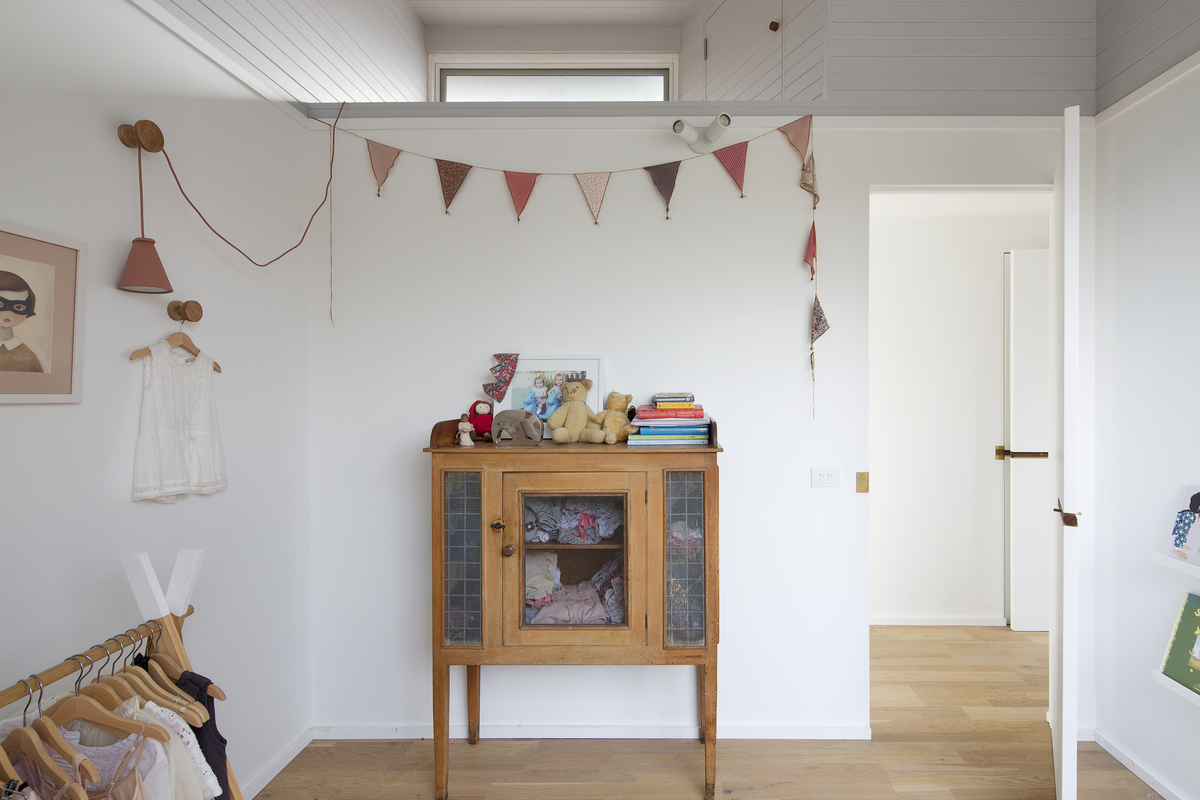 By incorporating a number of living spaces in various parts of the house, the architect has created private spaces for everyone in the family to have some alone time. That's exactly how you make a house feel larger and work comfortably for a family of six. 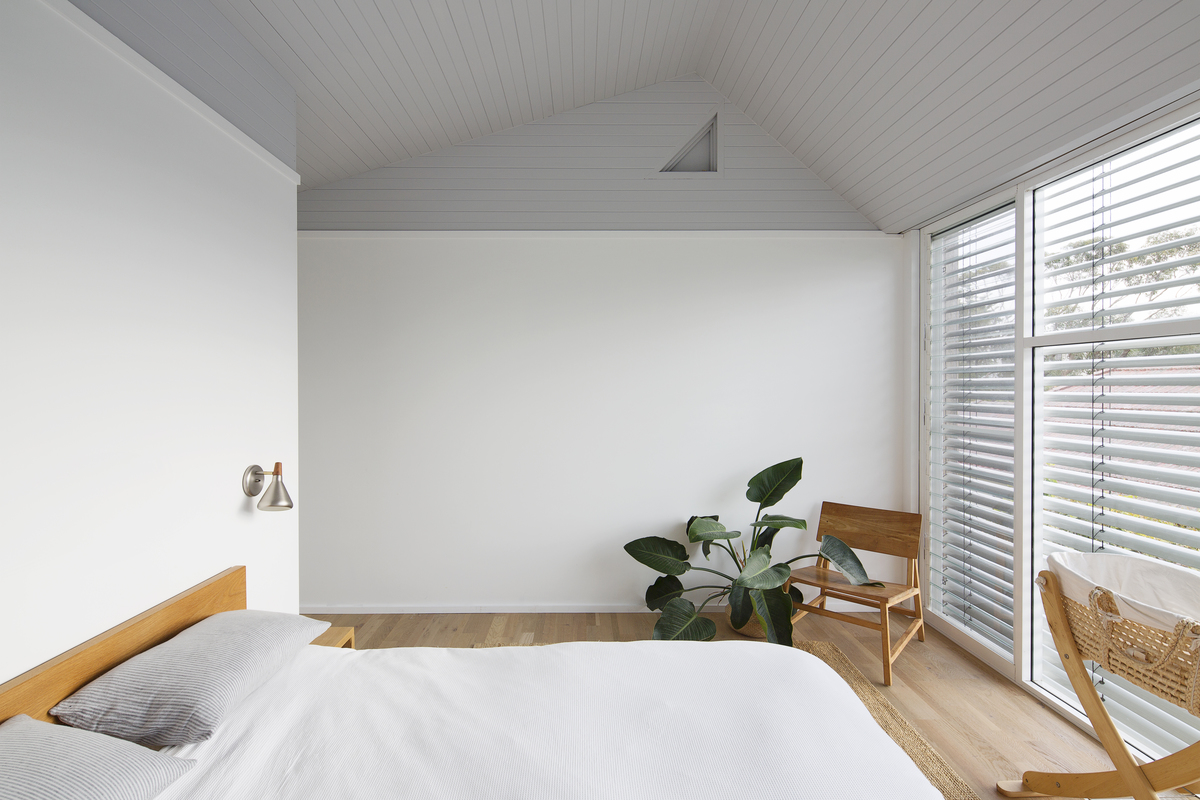 "It is an ambitious goal to house a family of six in a 140 square metre home, however, with attention given to the social dynamic and quality and variation of the spaces within, Casa Crisp is up to the challenge." Buck&simple 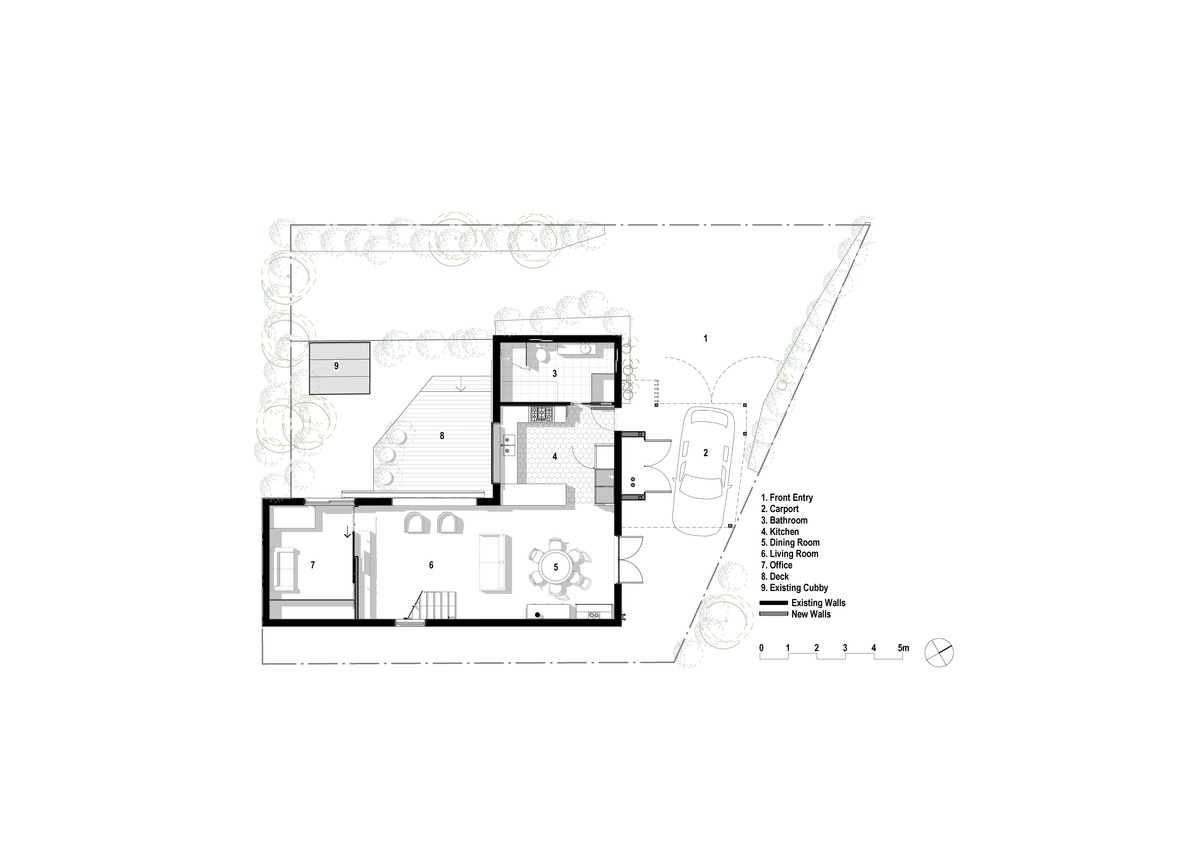 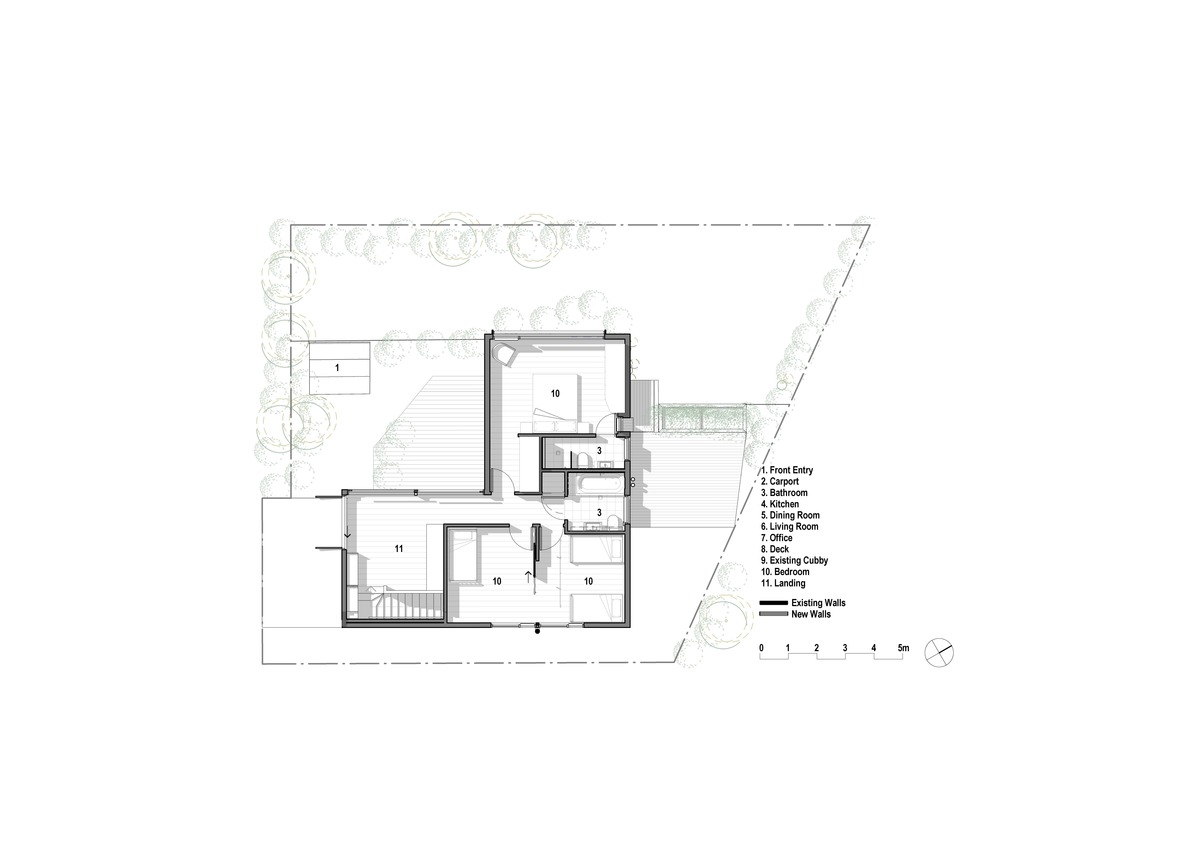 Tell us what you love about Casa Crisp...