"Perched on the eastern spur of Linden in the lower Blue Mountains, sat a project home partially completed in 2003", explains architect Alexander Symes. "The new owners, a young couple, decided after suffering through several cold winters that it was time to renovate the house into a thermally comfortable family home." But this alteration and addition had its challenges, given its dense bushland setting... 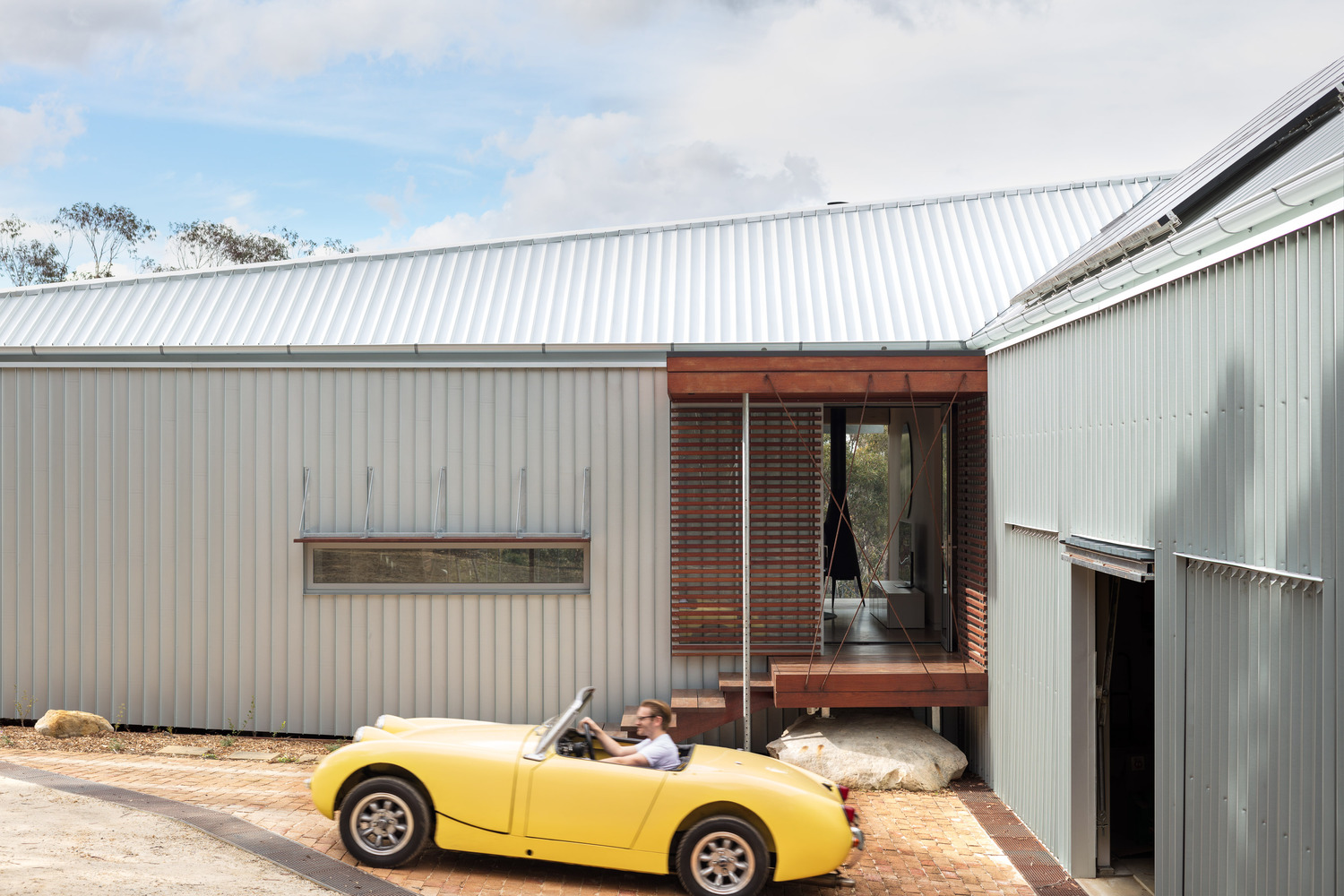 The existing houses on the site were built as two pavilions. The owners originally wanted to maintain the two buildings and build a new home to the east. This would leave one pavilion for guest accommodation and the other for ancillary spaces, while the new building would create enough space for their family and "capture the surrounding bushland and easterly views across the Sydney basin to the harbour and city." 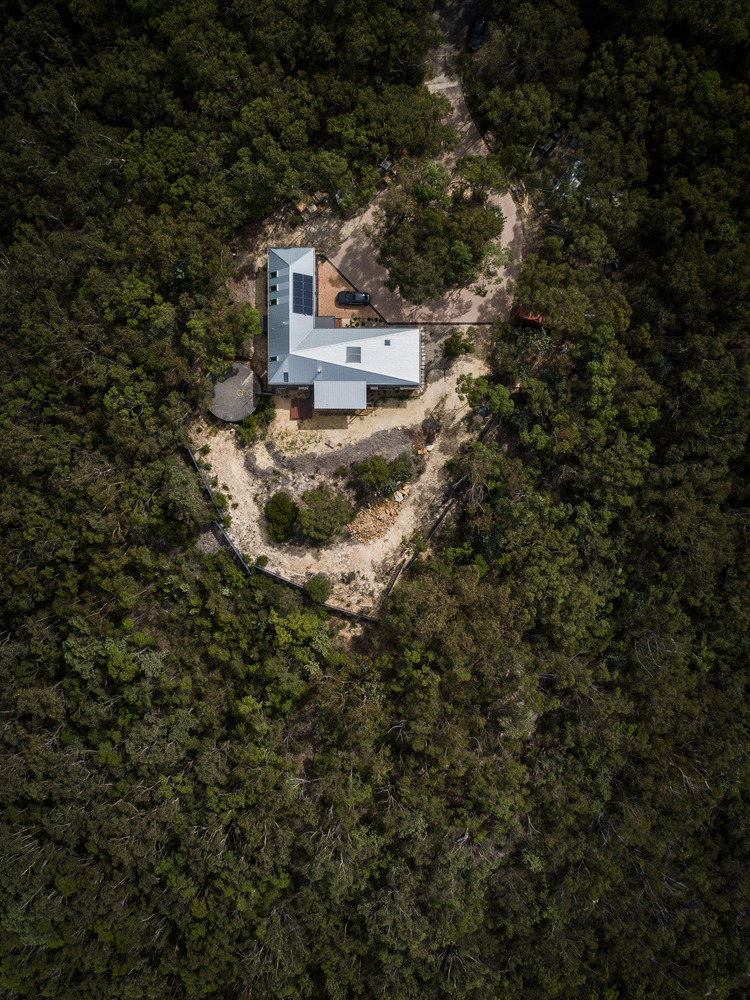 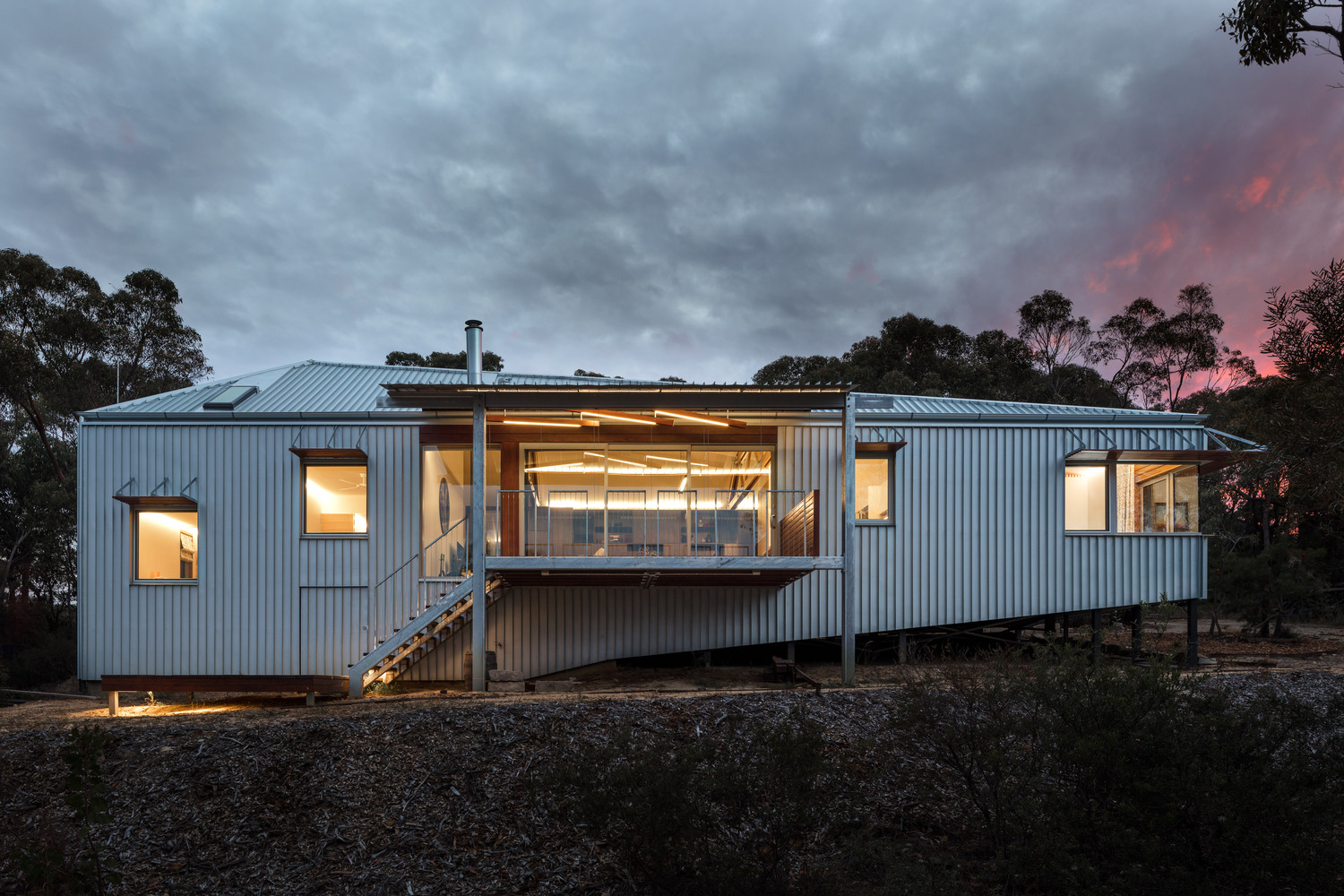 After carefully considering the site, the architect proposed another strategy. By reusing what was already there, and utilising as much of the existing buildings, services and structure as possible, they would be able to reduce waste and manage costs while minimising the impact on the bushland. 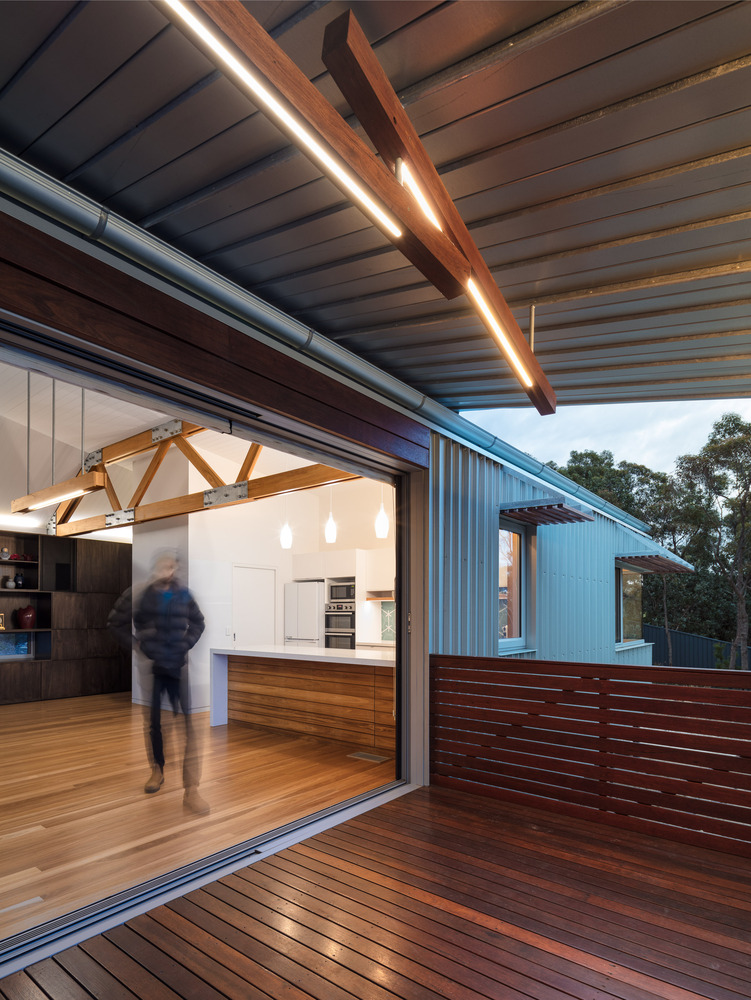 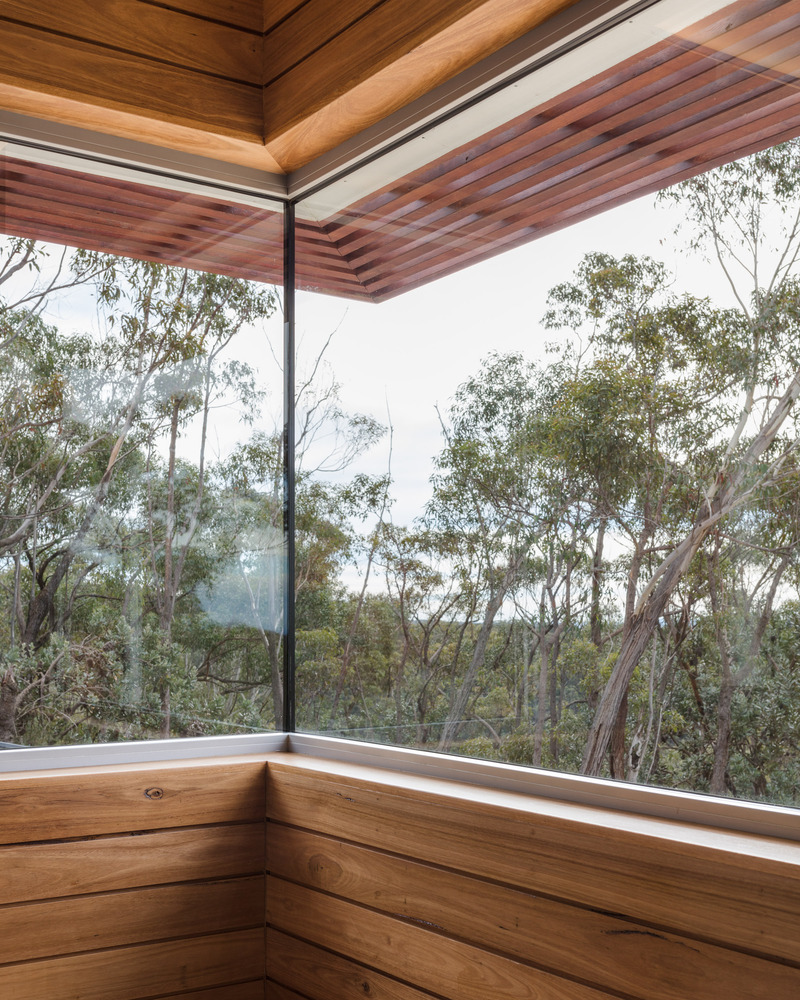 From this came the idea of an L-shaped house to link the two pavilions, where the north-east pavilion becomes the parents' zone, while the south-west pavilion becomes the children's area, office and ancillary spaces. A new central family space navigates the level change and links the two pavilions. By bringing all the family's needs together under the one roof, the architects created a single eastern facade to take in sweeping views of the bushland and city skyline from multiple living spaces. 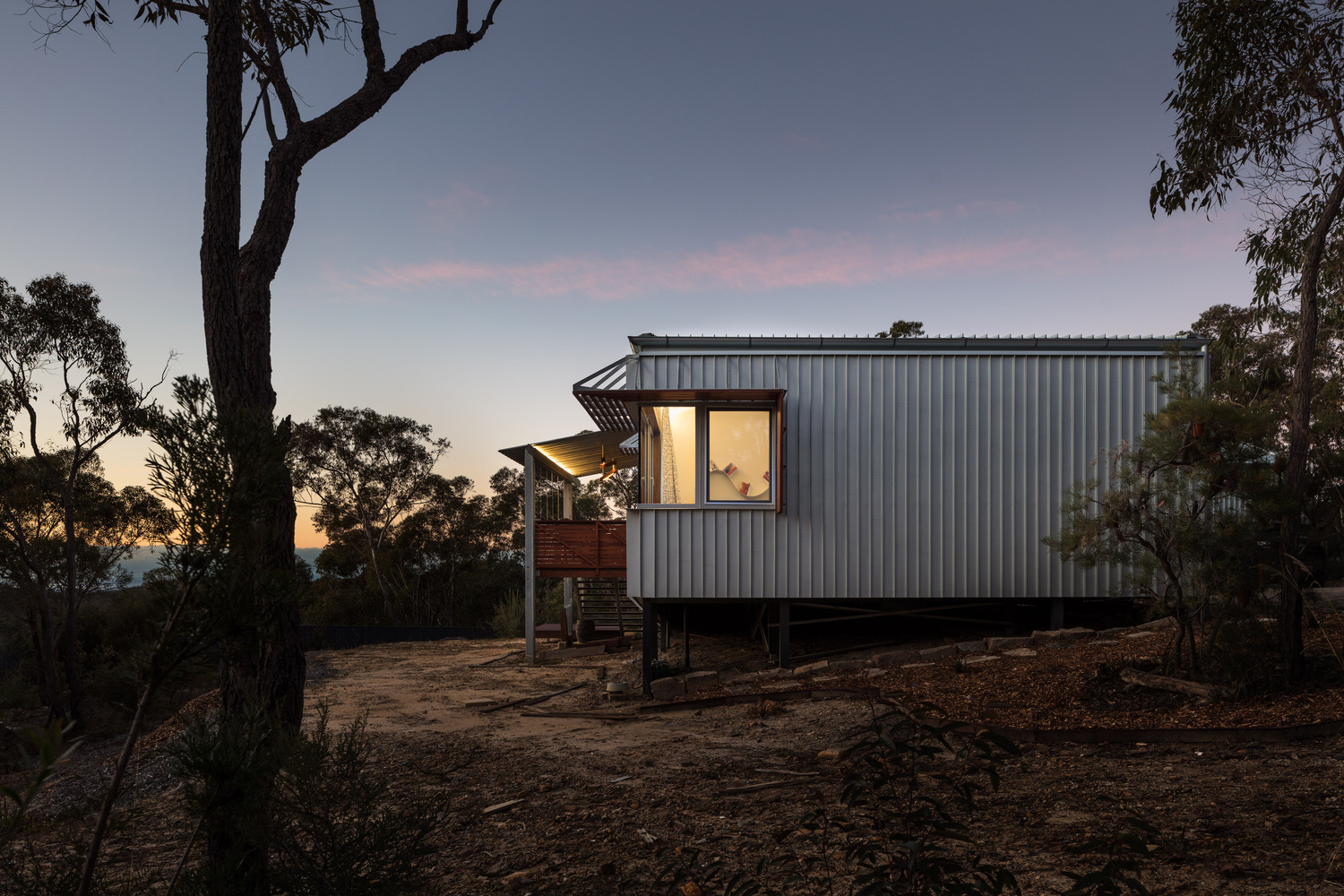 The house is clad in zincalume cladding for one very good reason - fire protection. Given the home's bushland setting, the threat of fire is high and needed to be addressed as a condition of the building permit. The zincalume cladding and bushfire-rated hardwood protect the home from the threat of bushfire. It also creates a contrast to the bush, "the simplicity and rhythm of the material provides a striking contrast to the natural bushland, with the zincalume shimmering on approach, reflecting the colours of the day." 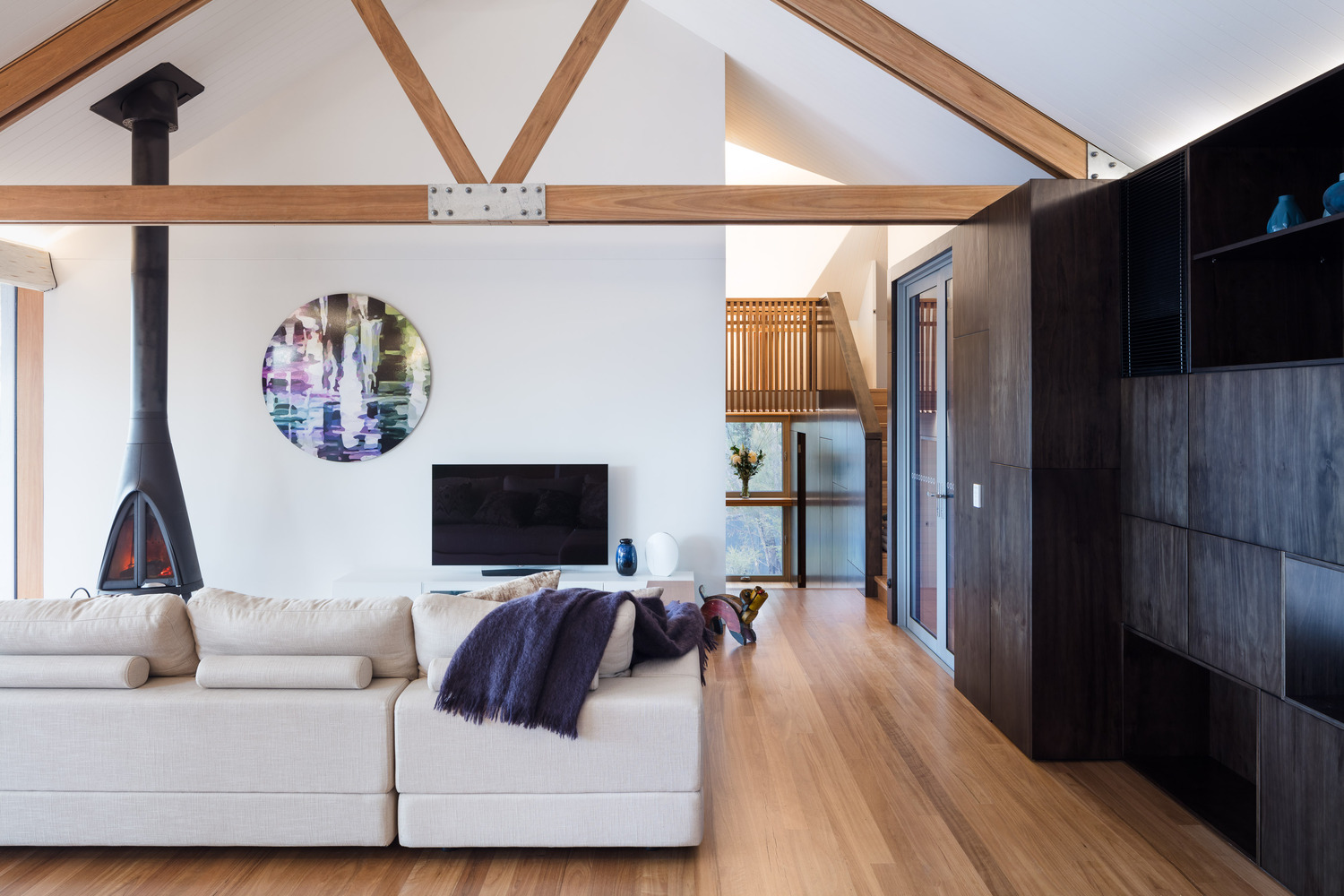 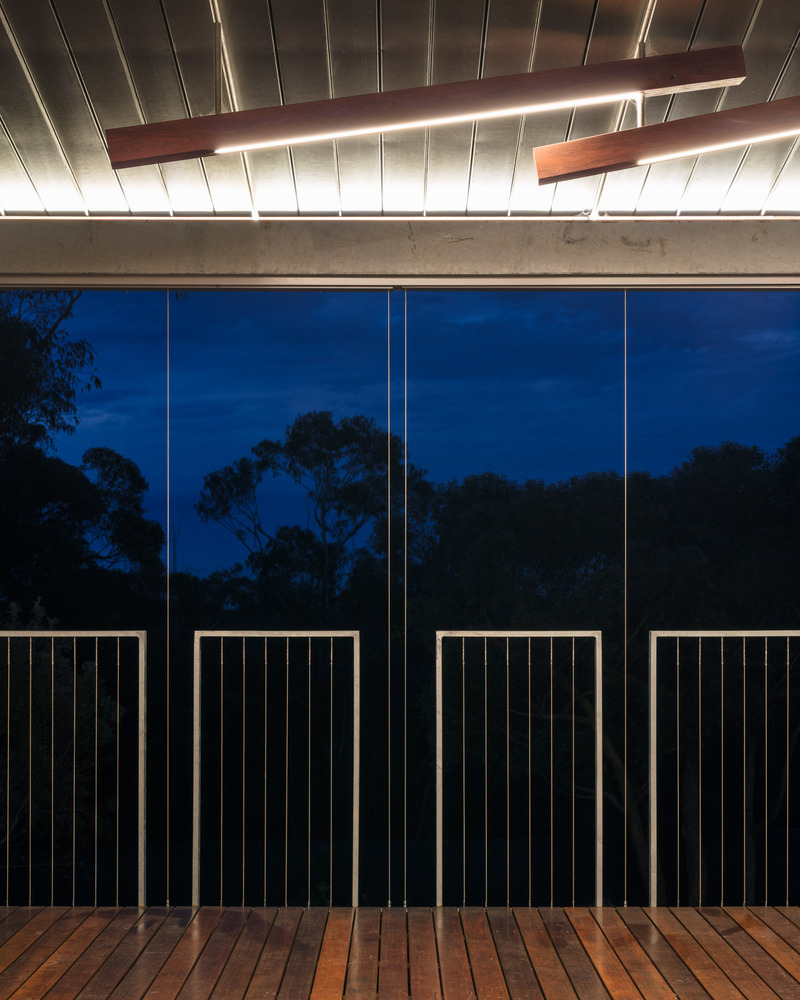 The renovation also protects the owners from the temperature extremes in this area, achieving an impressive NATHERS (energy efficiency rating) of 7.6 stars. To achieve this rating, the existing pavilions were completely re-insulated, new window frames are thermally broken to prevent heat transfer between inside and outside (or vice-versa) and the window to wall ratio is kept relatively low because windows are the main source of unwanted heat loss/gain. As the architect explains, "this means L-House has a lower peak demand which in turn reduces the overall residential demand on peak days, which Ausgrid estimates increases the size of their power stations by 147% and is a key initiative on moving to a greener grid." 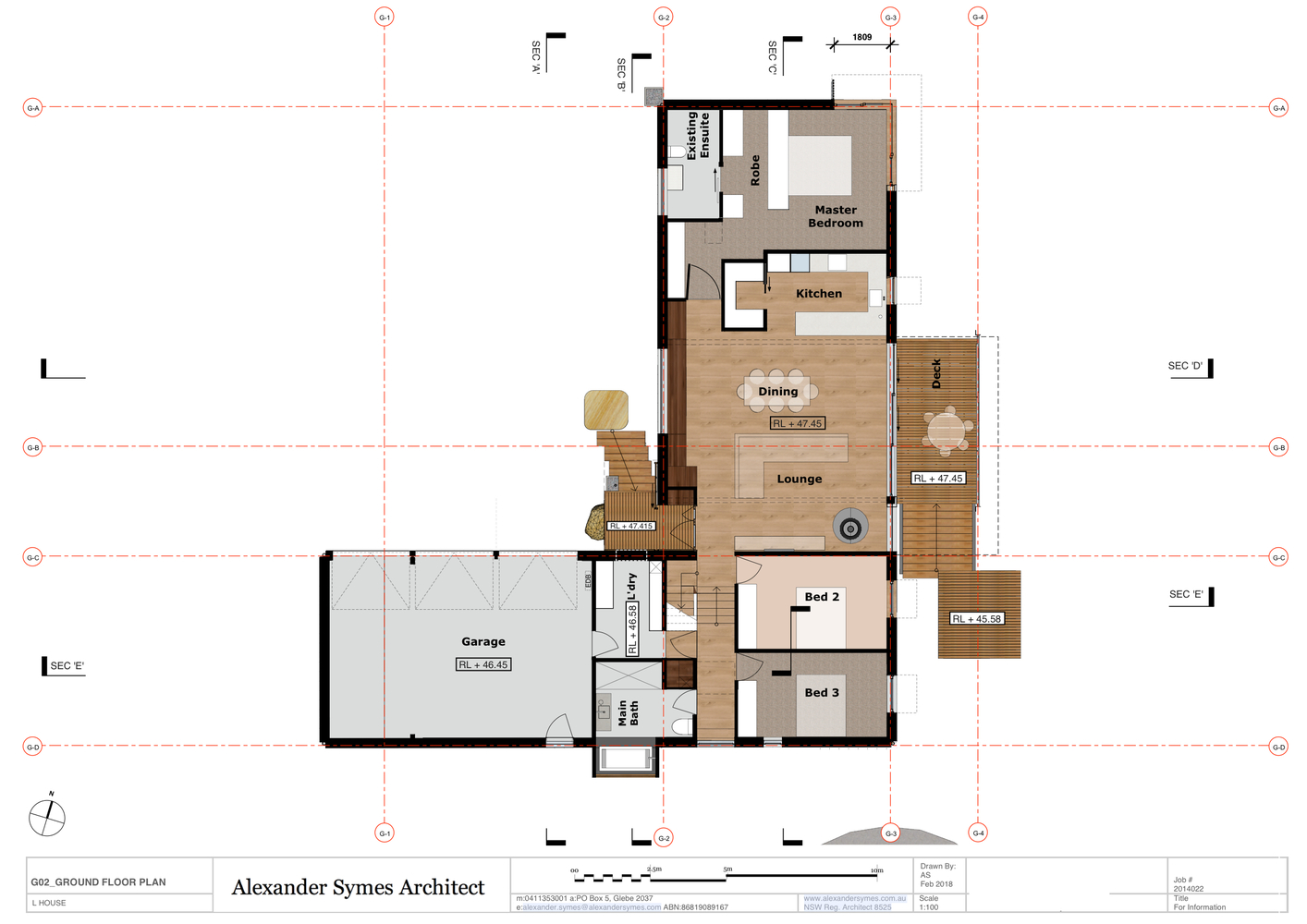 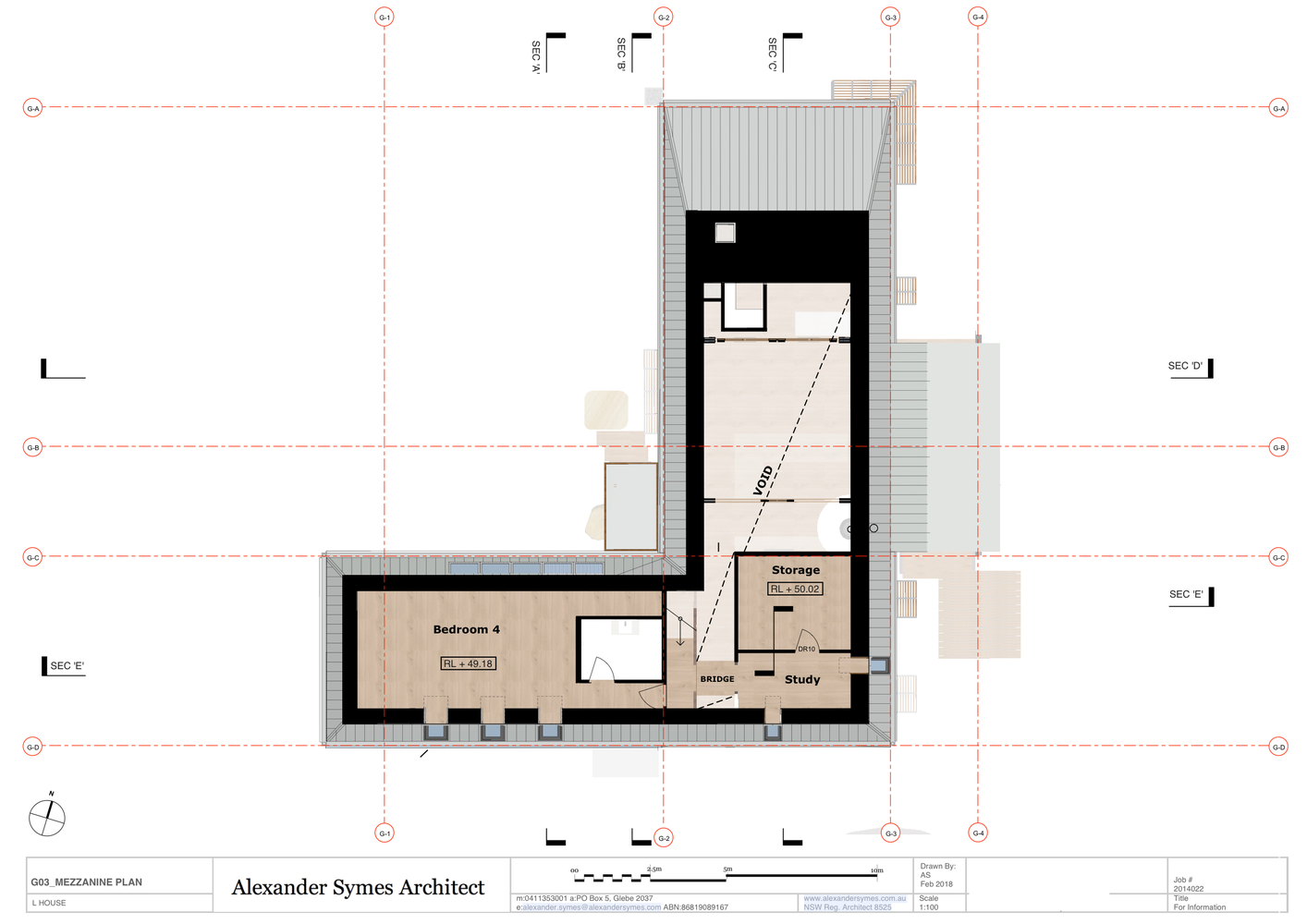 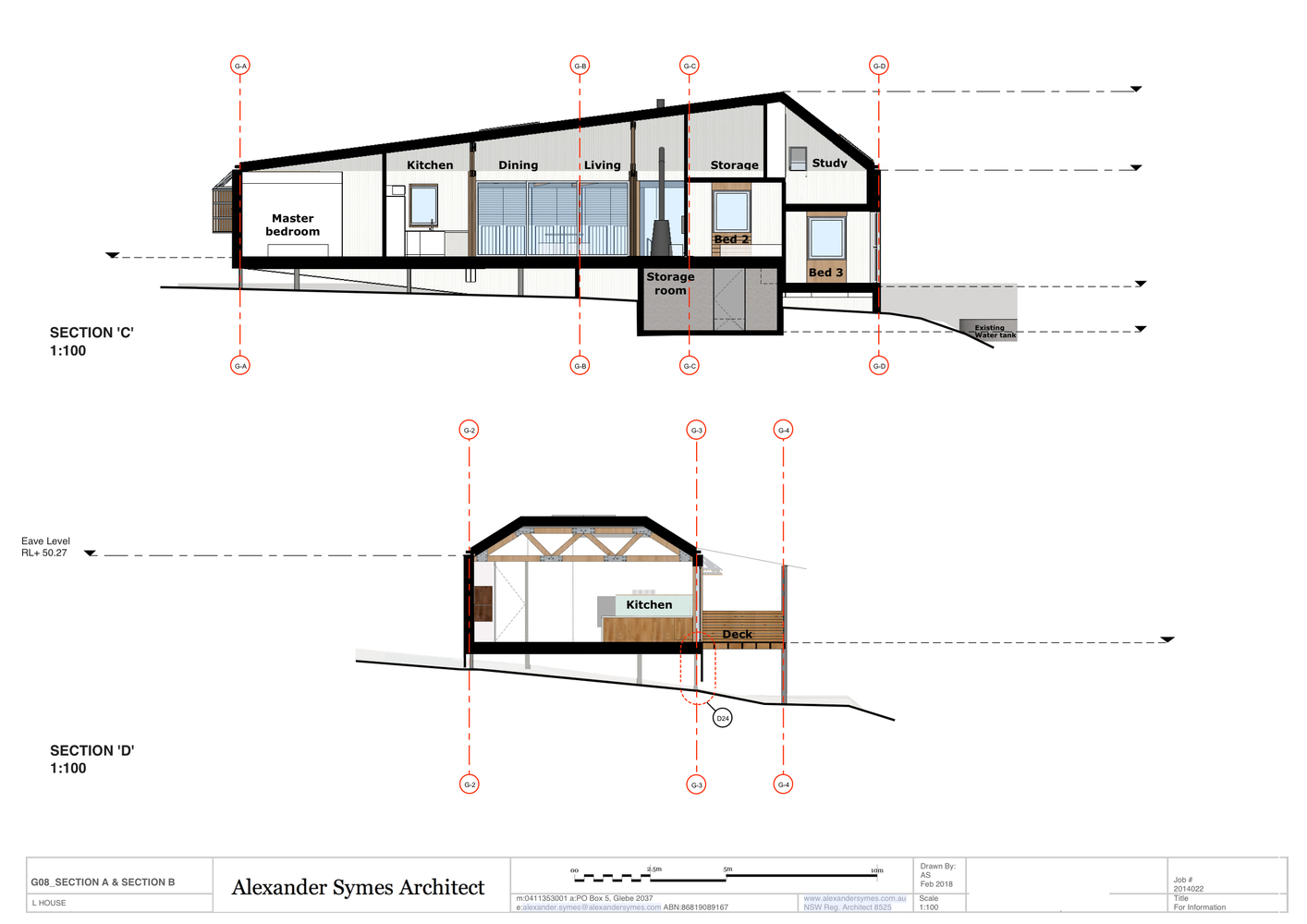 "The design and construction teams worked in an integrated manner to manage the complexities of environmental protection, bushfire mitigation and the re-use of services and structure. The outcome is a highly crafted home that celebrates its natural environment and delivers a low operational energy comfortable home." - Alexander Symes Architect 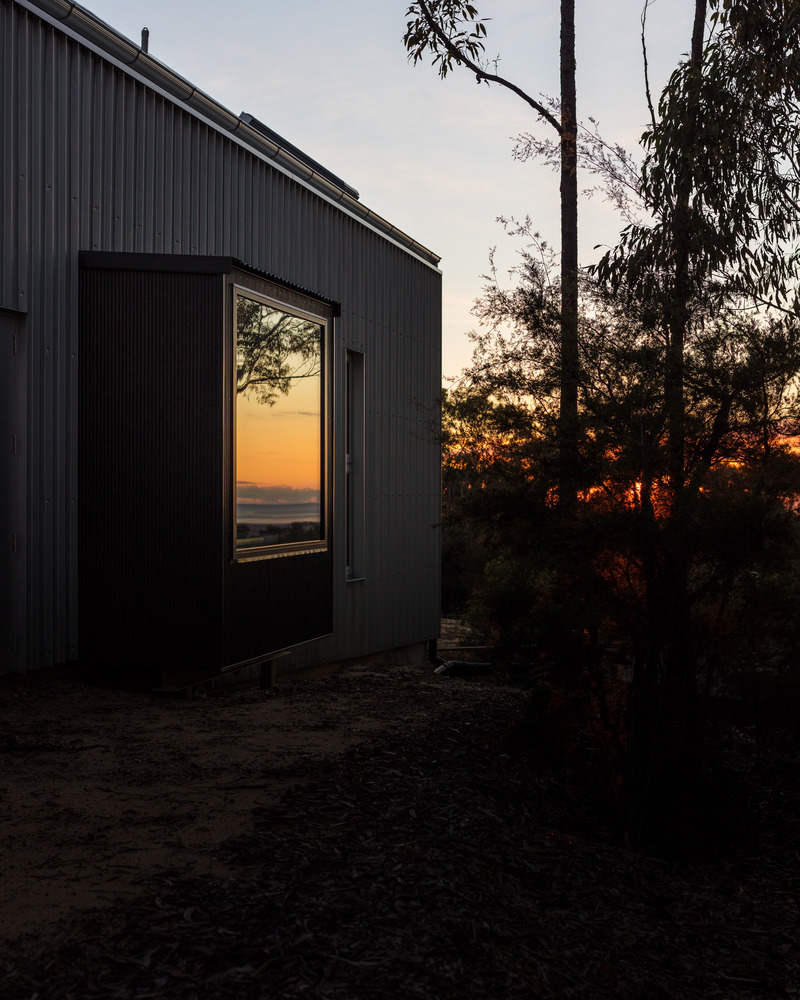 Tell us what you love about L-House...