What You Can Do to Rectify a 1980s Brown Brick Atrocity

The 1980s witnessed its fair share of atrocities. Iran-Iraq War crimes, the TWA hijacking and the film-clip to Billy Joel's Uptown Girl, to name but a few. Of course we're going to talk about none of those today because this is Lunchbox Architect, and we're more interested in the horrors of brown-brick facades and dodgy rear extensions. 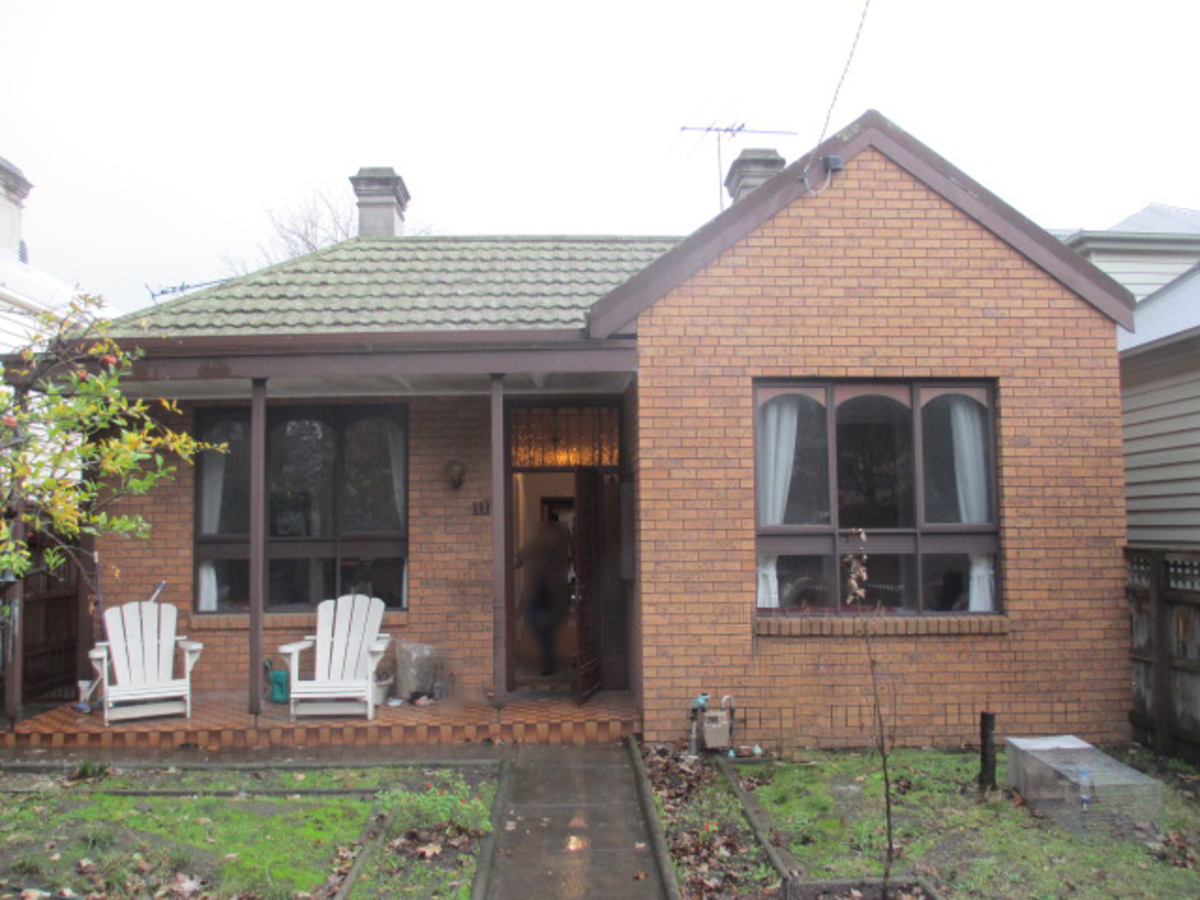 Before: A Victorian-era home was re-clad in the 1980s with brown brick.

At Lawes Street, the '80s were cruel to this Victorian-era home. The decade saw the cottage stripped of its identity and re-clad in brown brick (eek!). Out the back, an ineffective addition left the home feeling dated and dysfunctional - a little bit like Val Kilmer. 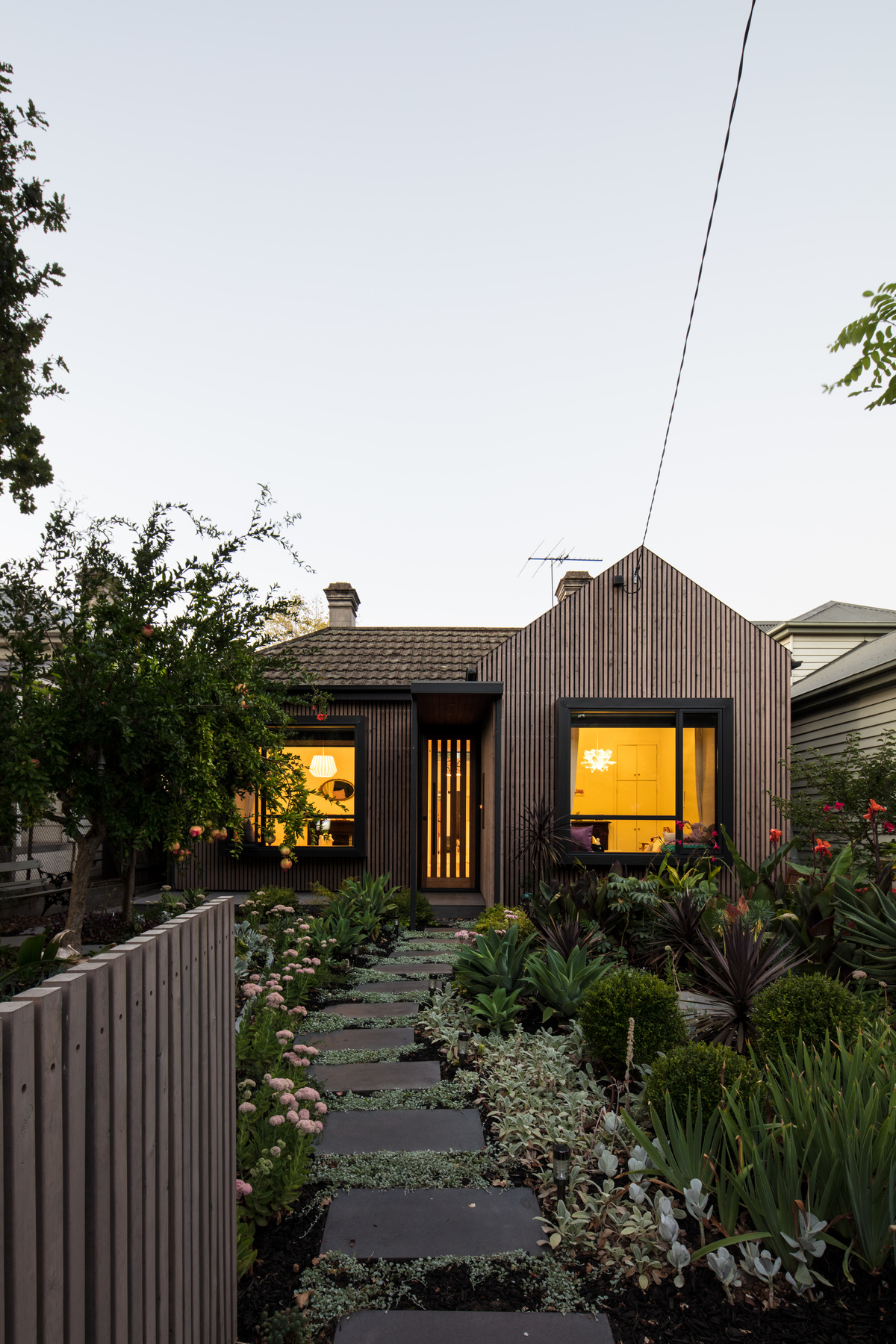 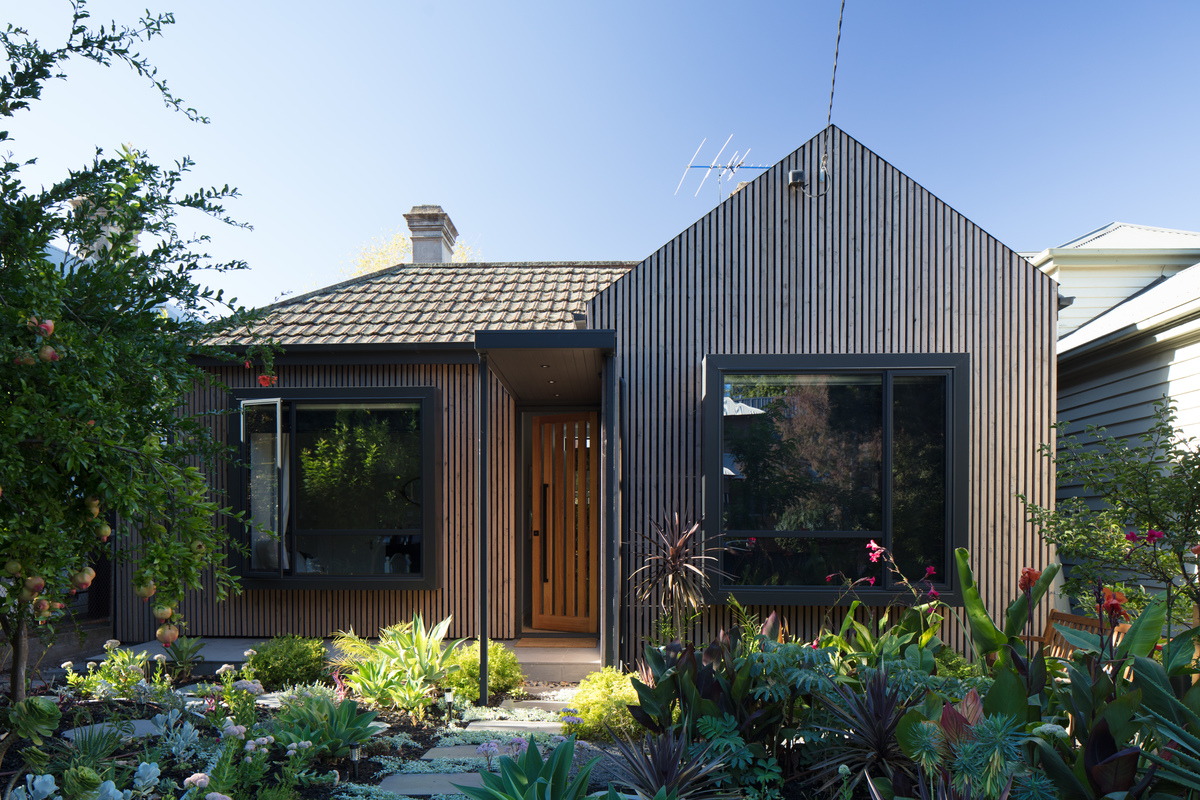 Habitech Systems knew how to revive this '80s mess, cladding over the brown brick with naturally oiled Cyprus timber battens and designing a new north-facing, open-plan addition at the rear, all protected by their high-performing propriety insulated wall and ceiling system. 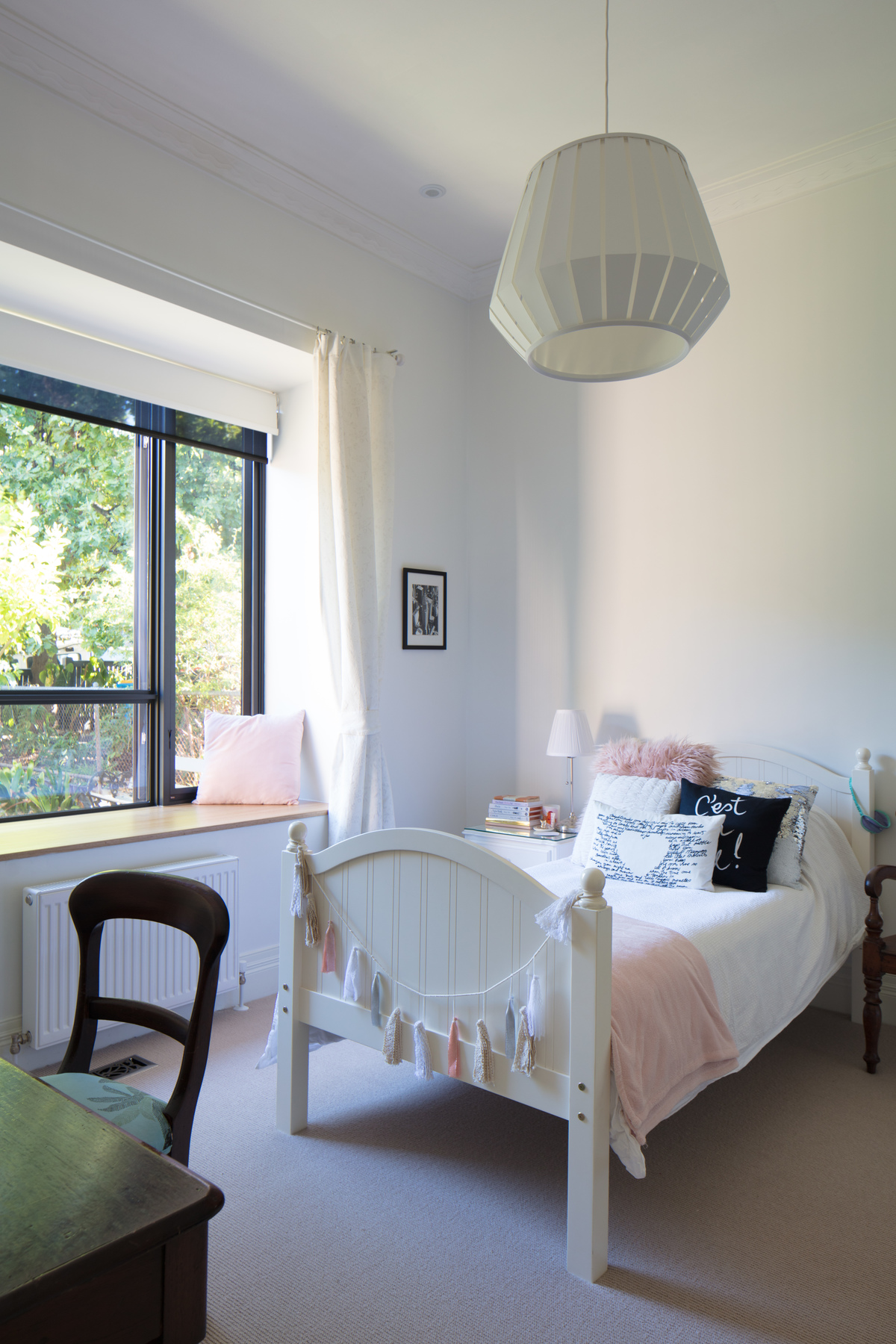 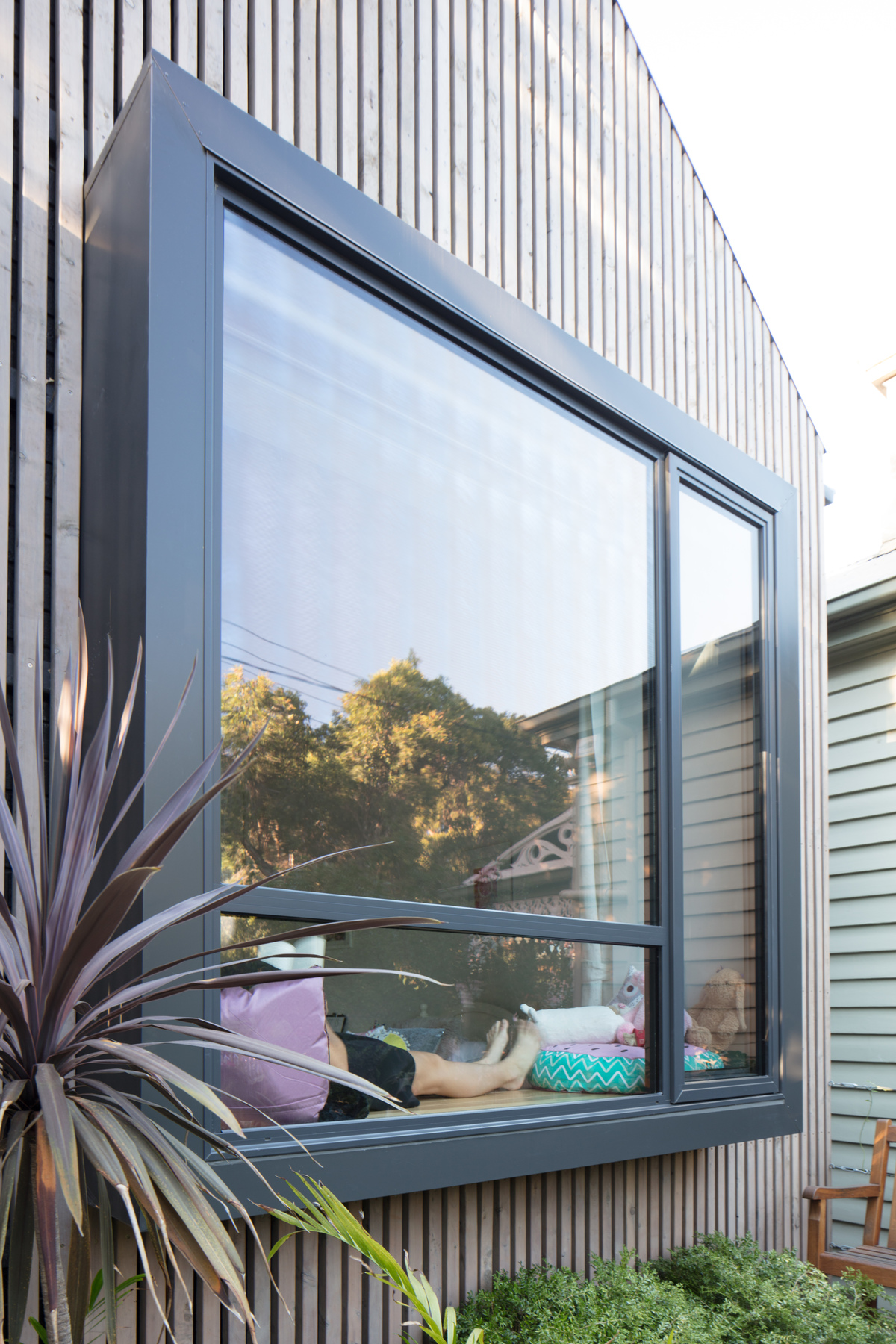 In the original part of the house, the kids' bedrooms have been given a modern take on the bay window, creating a seat to overlook the front garden. After removing the south-facing verandah which blocked light to the bedroom, a new entrance canopy highlights the home's entry and provides protection to the front door. 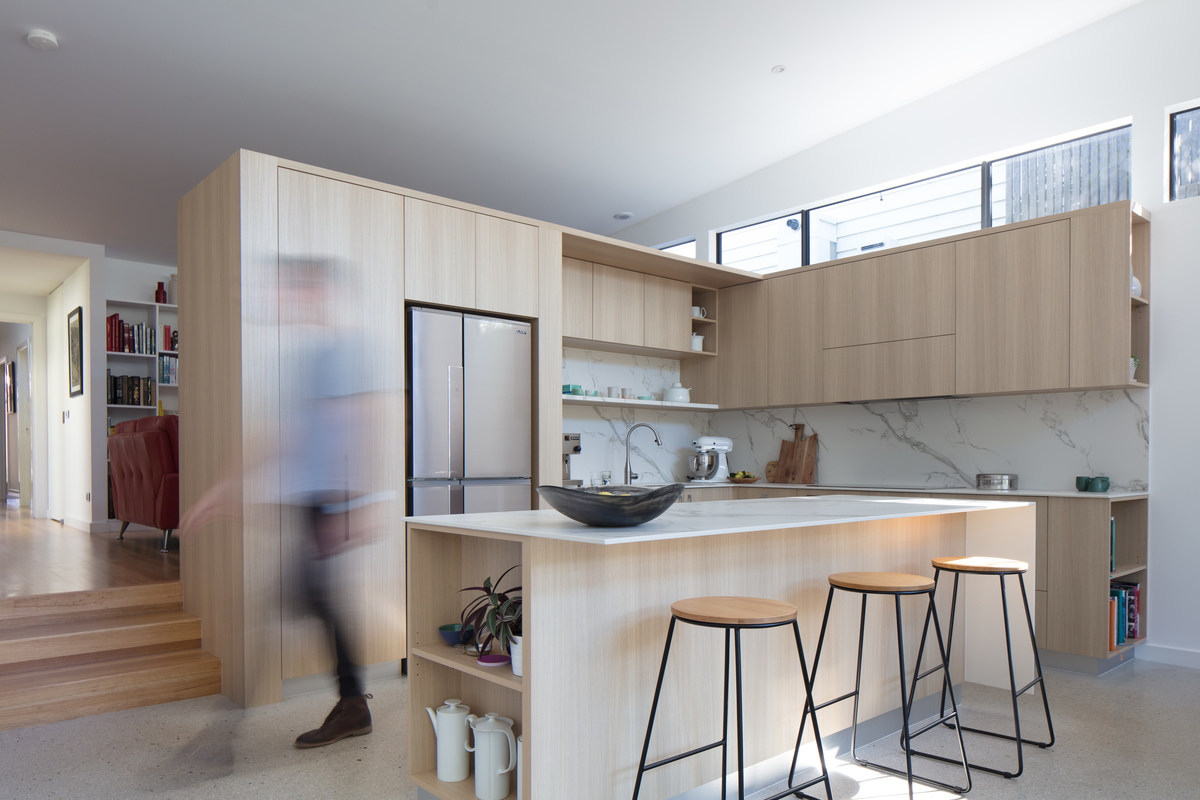 A challenge for Habitech was dealing with the block which slopes down to the rear, while still ensuring the home (and its new open-plan living area) had a direct connection to the garden. This was overcome by creating a step down into the kitchen and living area. The lounge is tucked behind the joinery of the kitchen, creating a quiet, protected space away from the hustle (and hassle) of the main living areas, without leaving it disconnected. 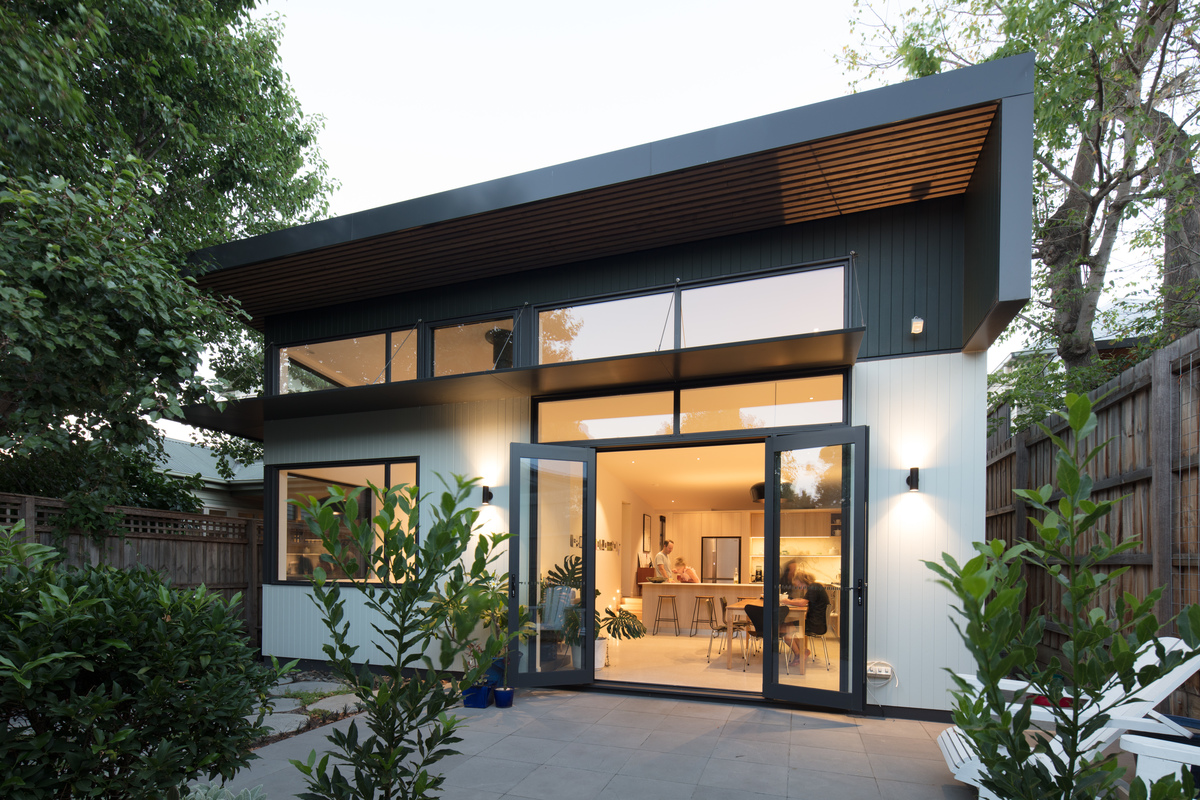 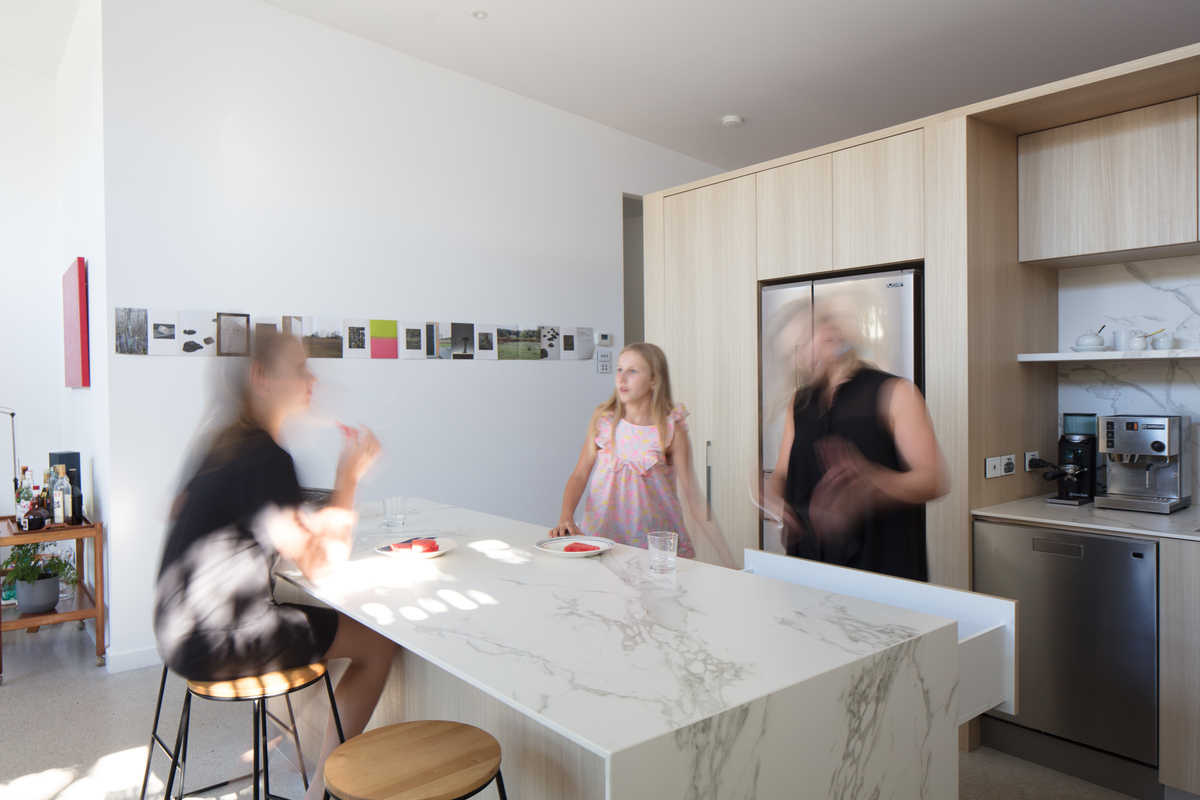 The roof angles up towards the north to bring in maximum light which, combined with the step down, creates a dramatic high ceiling above the main living spaces. 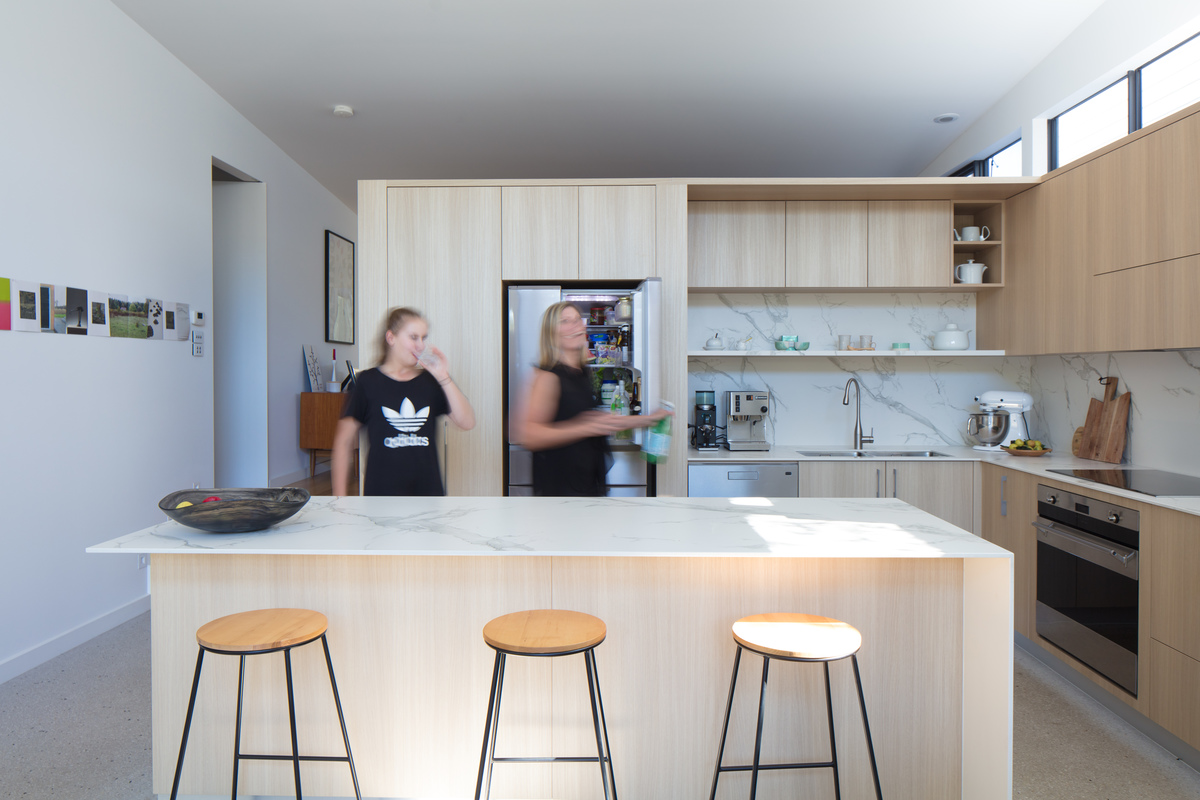 Habitech Systems also had to be conscious of the street to ensure the new addition didn't overlook or overshadow its neighbours. "The adjacent neighbours' privacy and solar access was maintained in the design of the addition by use of only a high-level window slot along the western side while the eastern facade," explains Chris Barnett of Habitech. "[This] was set back alongside the existing adjacent building, ensuring no overshadowing or overlooking to their garden or internal spaces." 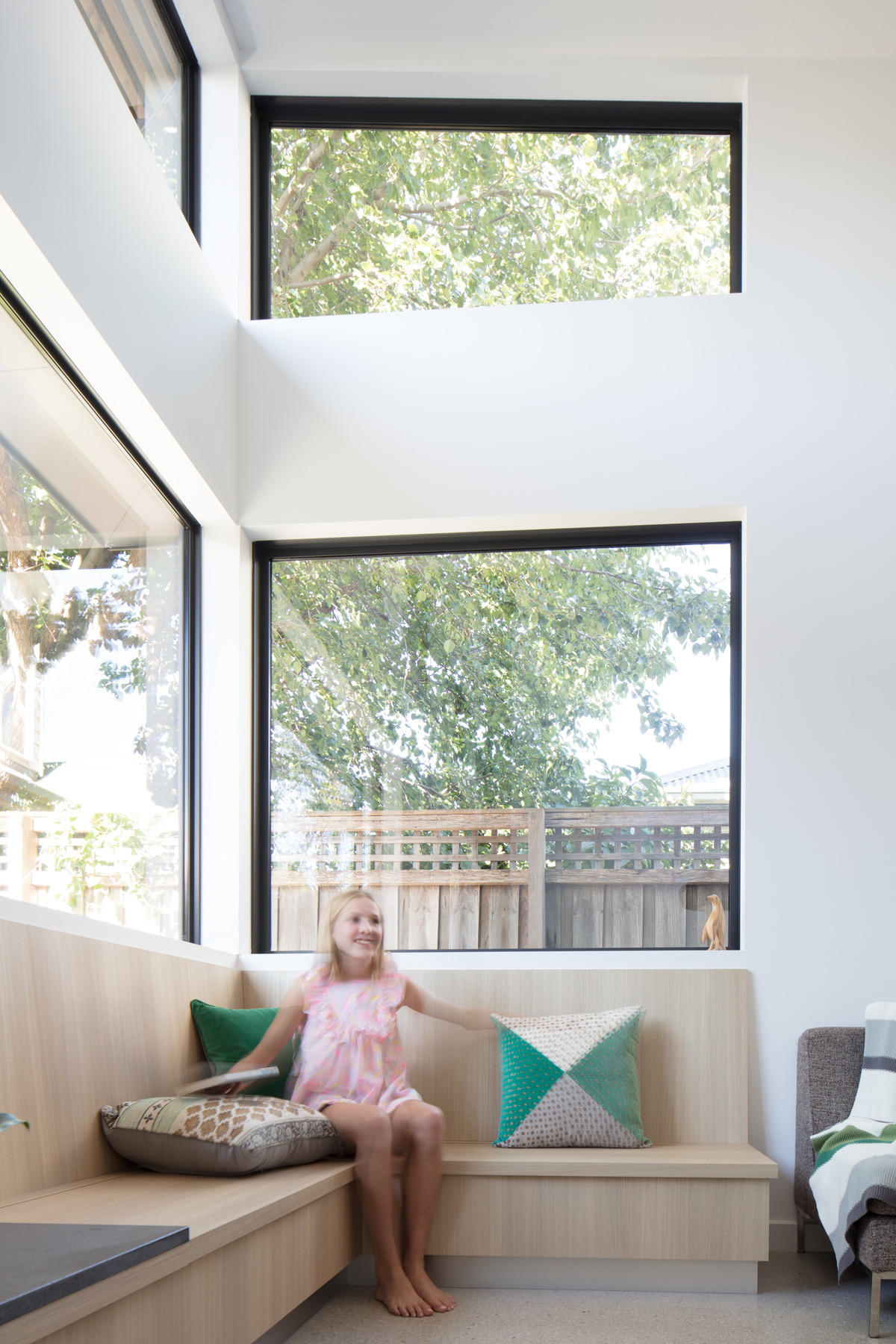 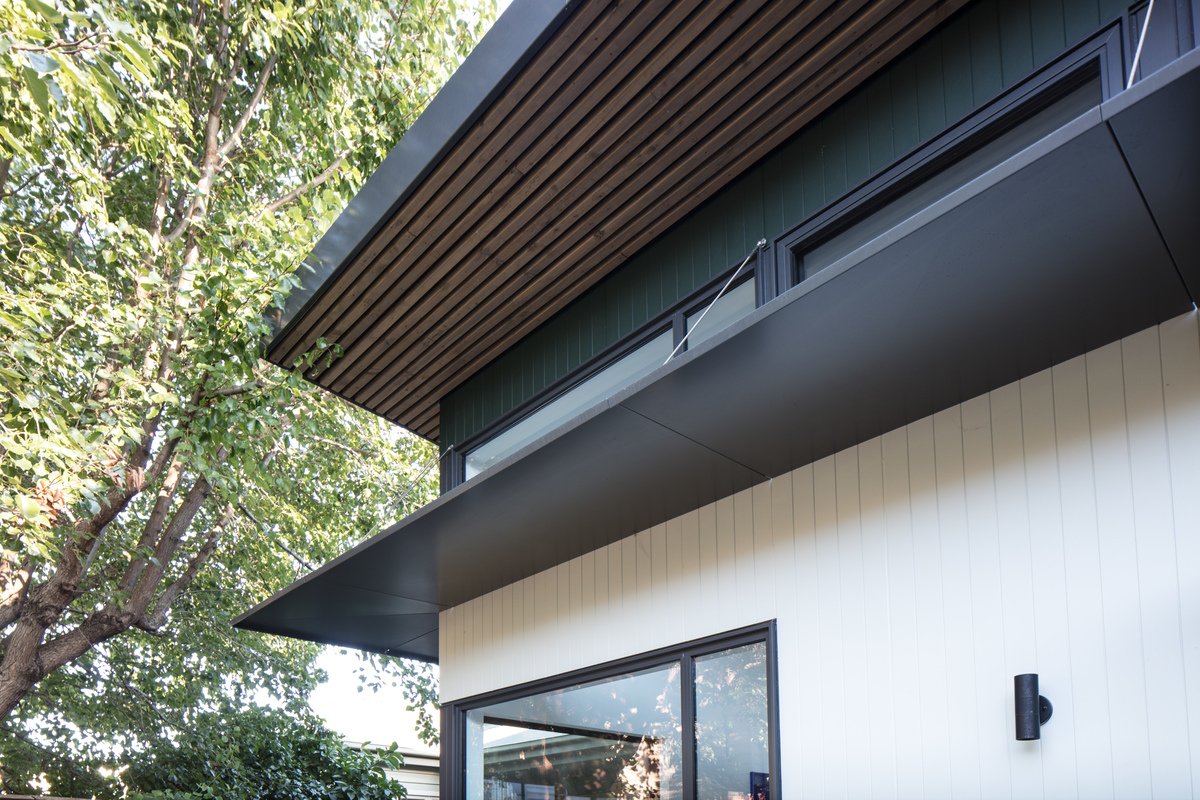 Reorienting the home towards the north garden played a big part in improving its performance. Combined with Habitech System's highly insulated (SIPS) wall and roof panels and including double-glazed and thermally broken windows means the home is now naturally comfortable, with less need for auxiliary heating and cooling. "Heat reclamation ventilation and floor and wall based hydronic heating and air-conditioning provide high efficiency active comfort systems when climate is more extreme," explains Chris. While "optimal shading awnings and eaves of the northern and eastern glazing also ensures best solar access in winter but minimal summer access". 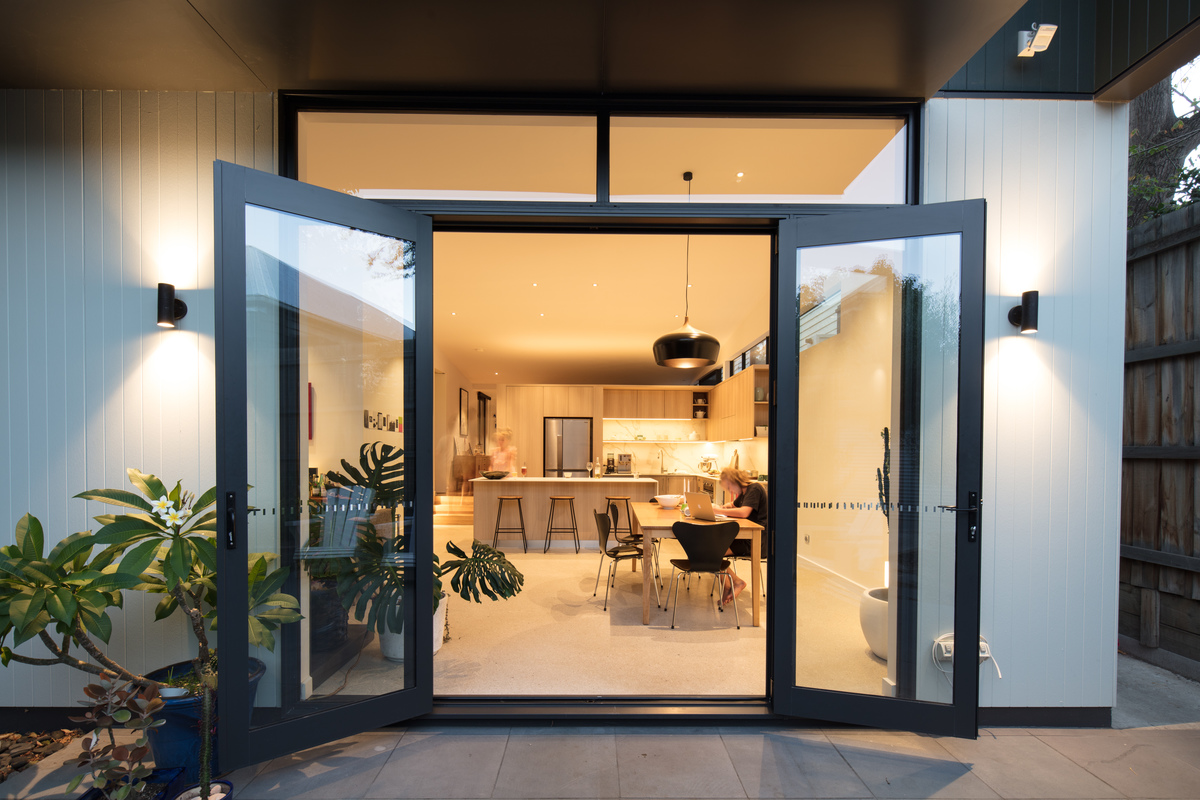 From '80s nightmare to 21st century dream, this home shows how you can rework even the most dated home on the street without a massive demo and rebuild.

Tell us what you love about Lawes Street House...