Originally Built As a Weekender, They Loved It so Much They Moved In!

Alex and Robert, owners of this beautiful spot in Merricks on the Mornington Peninsula, had a long family connection to the area, with Alex growing up locally and her mum establishing the property's vineyards. Alex and Rob wanted to build a new home for themselves and two daughters Pearl and Quincy. Initially, it would be a weekender, before moving in permanently when the kids reached school age. But then COVID-19 hit and changed all their plans... 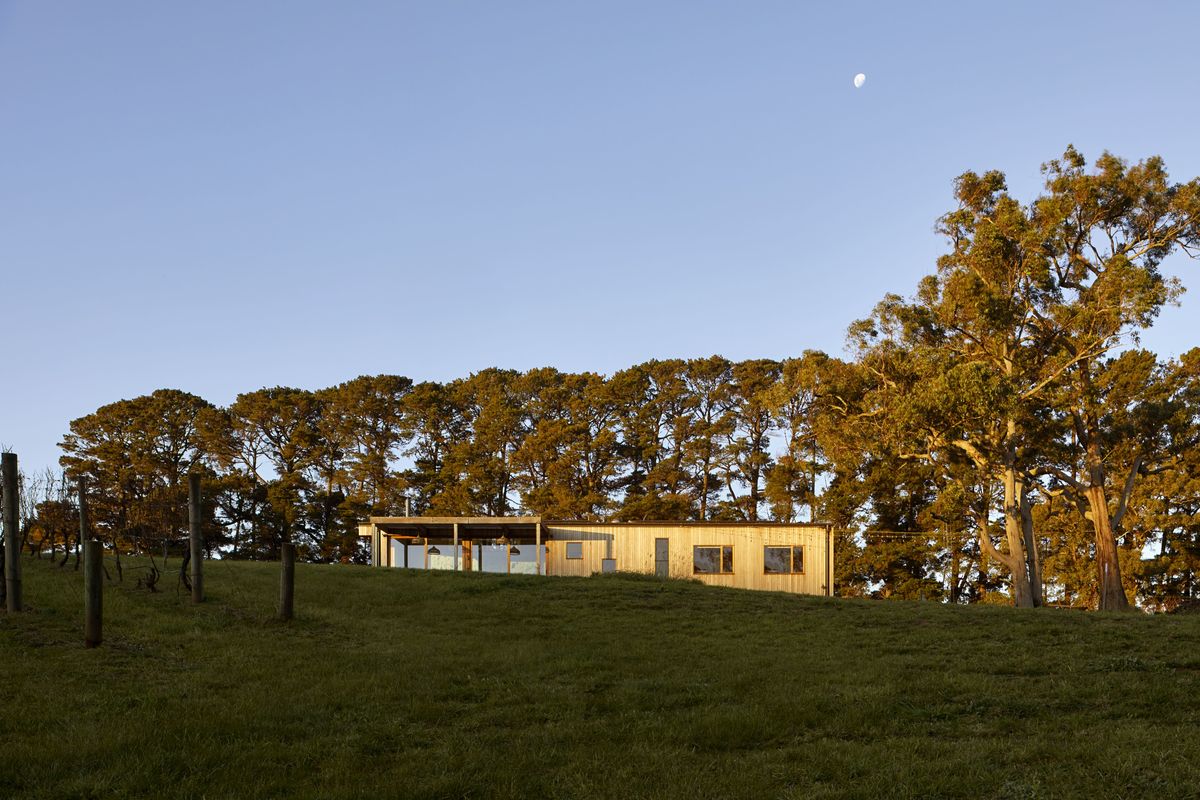 Michael McManus Architects was engaged to design a home for the special site. On his first visit, he was struck by the beautiful landscape. "The vast sense of green and space overwhelmed my first experience of the site and the design intent was to minimise disruption and distraction from the naturalness of the site." 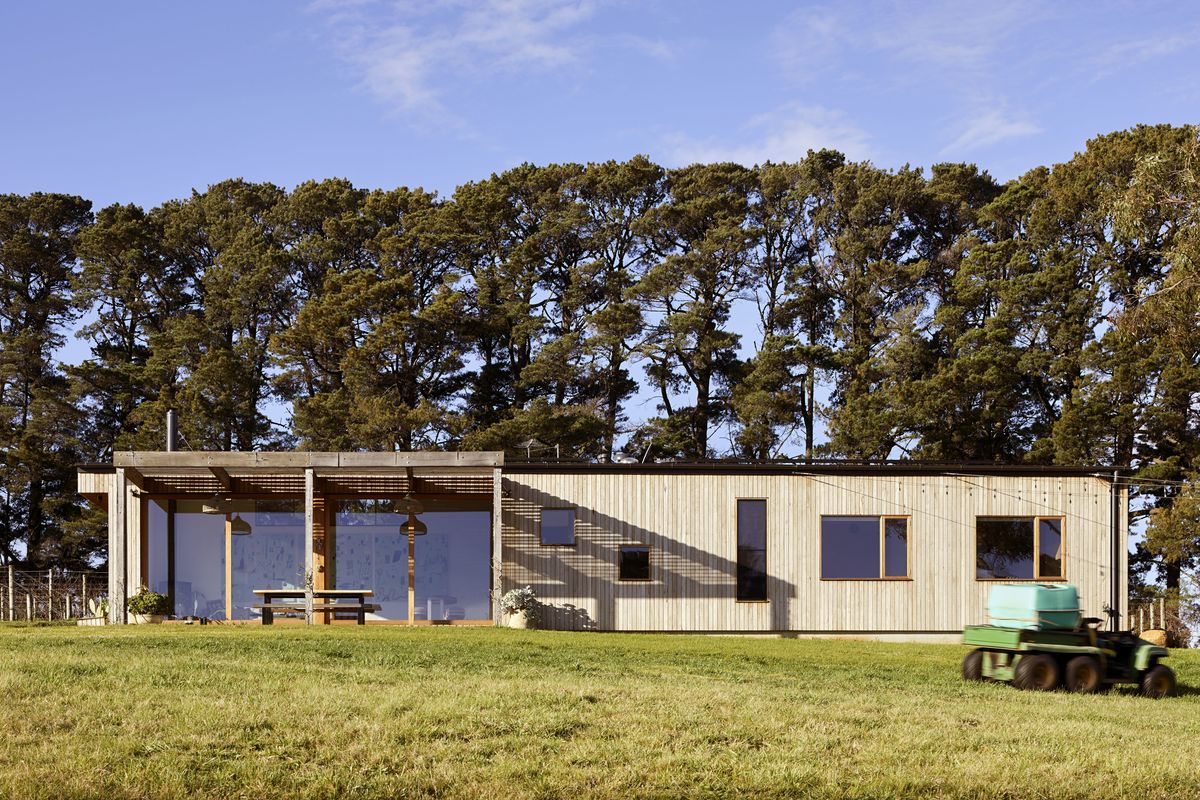 "[Alex and Robert] were interested in a single-storey, three-bedroom home, with the potential of having two living spaces", explains the architect. "The site has great views out west that they wanted to capture - over rolling hills and treed gullies. Initially, it was presumed the site lacked all services, so being as self-sufficient as possible was important. As it turned out, electricity was located adjacent in the street, so the house is connected to the grid, but it had to brought 180 metres up the site’s driveway to the building." 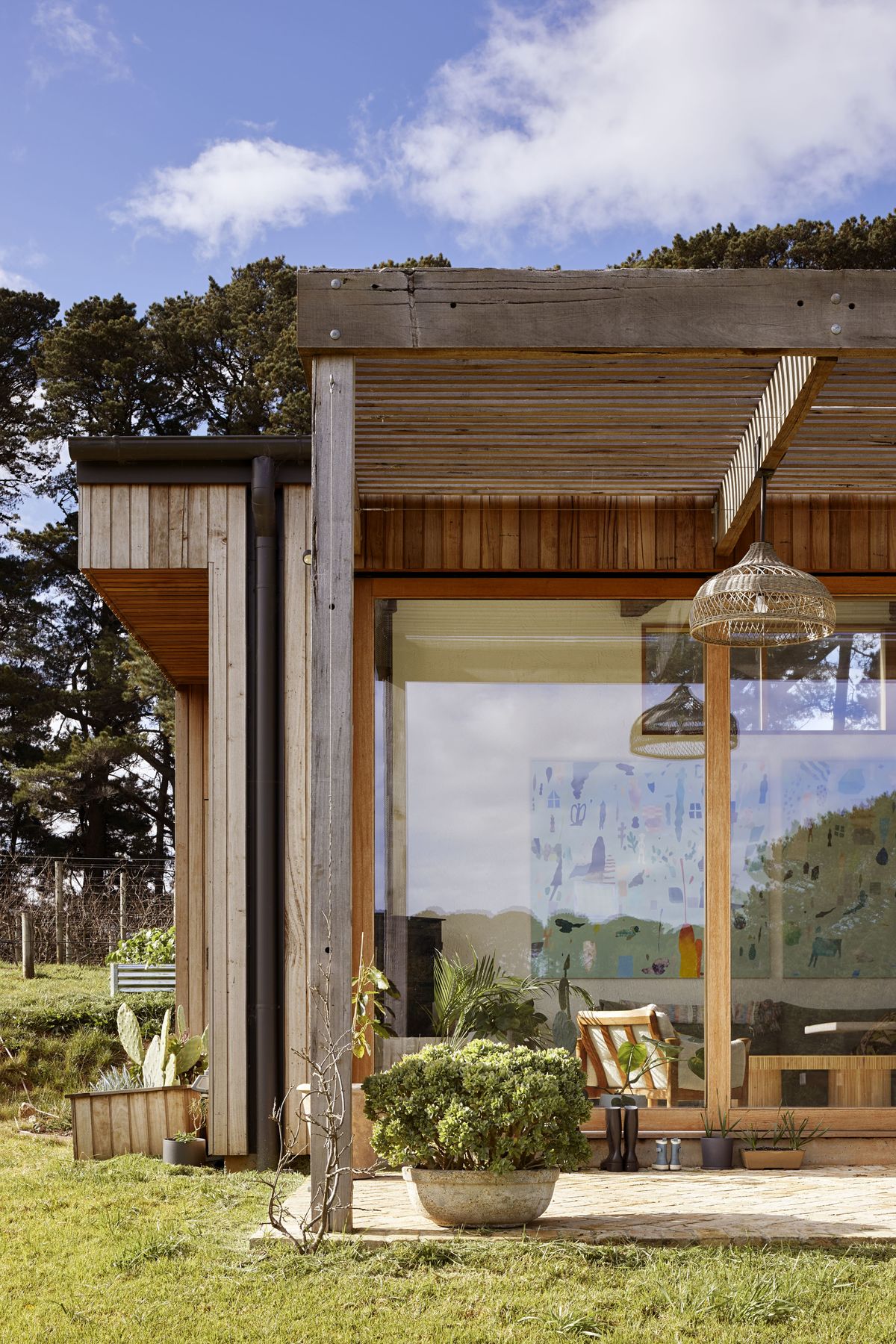 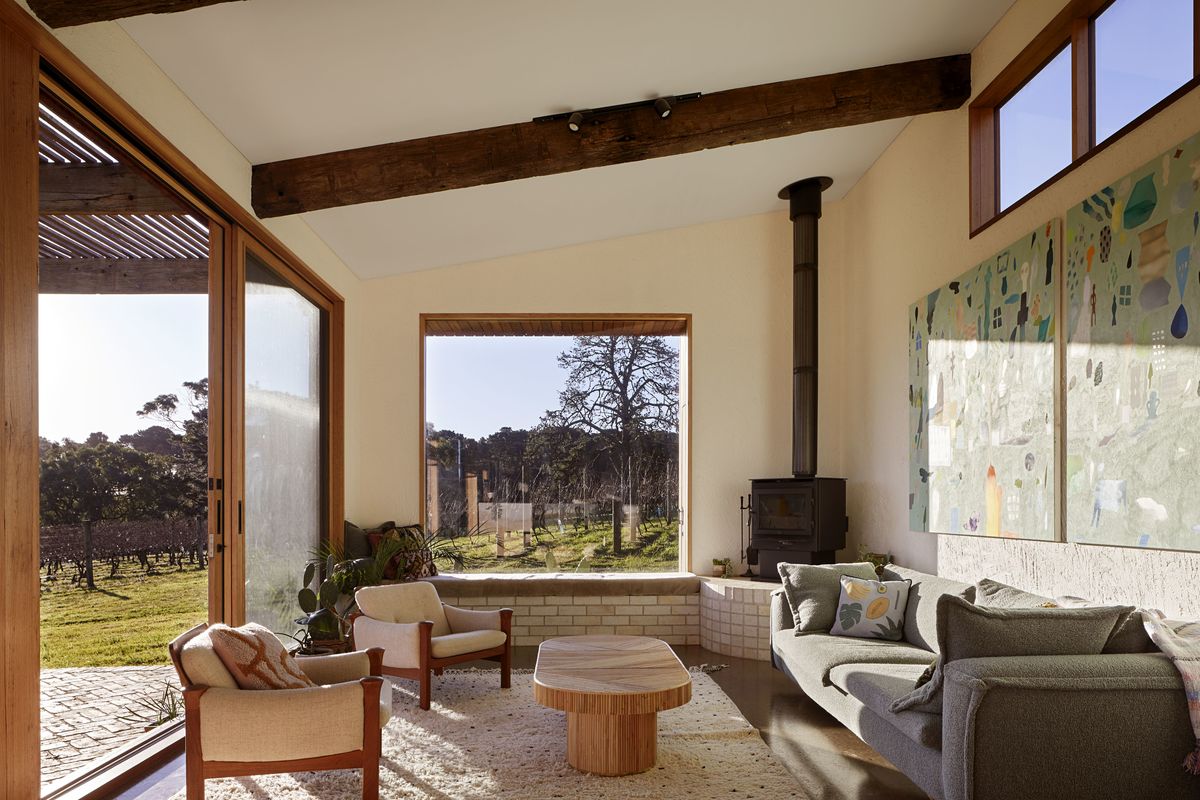 The home is located at the centre of the 5.5-hectare vineyard and enjoys a position at the crest of a hill of considerable slope. This makes for fantastic views and provides one of the naturally flatter pieces of land. The architect developed a plan which embraces the outdoors, creating effortless connection between inside and outside by ensuring step-free entry at all the doors. Split levels into the living space and into the separate wing, allow the home to elegantly meet the land outside and create another connection the land; you feel its undulations, even inside. Creating this connection to the landscape had another benefit: being more cost-efficient to build with no need for fill, retaining walls or external landscaping. 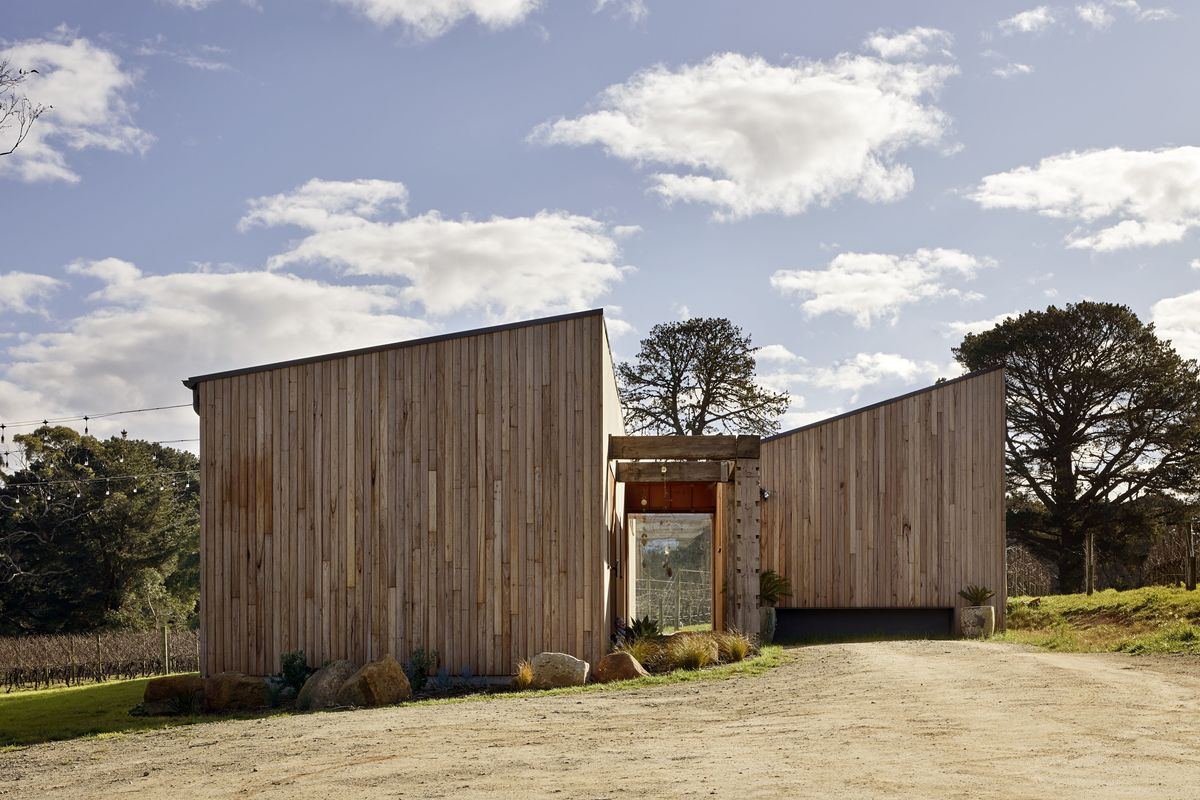 Another strategy to help the home embrace all of the views and meet the existing topography was to split it into two wings connected by a link. "During the day, the link gets beautiful light and serves to bring the outside in", explains the client. "Our toddler hangs out there all the time and likes to press herself against the glass, especially as a way to greet us as we approach the door when one of us arrives home. As I came closer to the house last night, the link was illuminated from the inside and created a really warm and welcoming beacon effect that invited me in for the evening. I stopped and thought how lucky we are to live here and have this beautifully designed and constructed house to call home."

The seperate wings have the added advantage of helping the home appear smaller and settle into the hill. While the glazed link offers yet another glimpse of the surrounding landscape as you transition from the living area to the bedroom. The simple floor plan allows for the future addition of a separate living space without major reconfigurations. 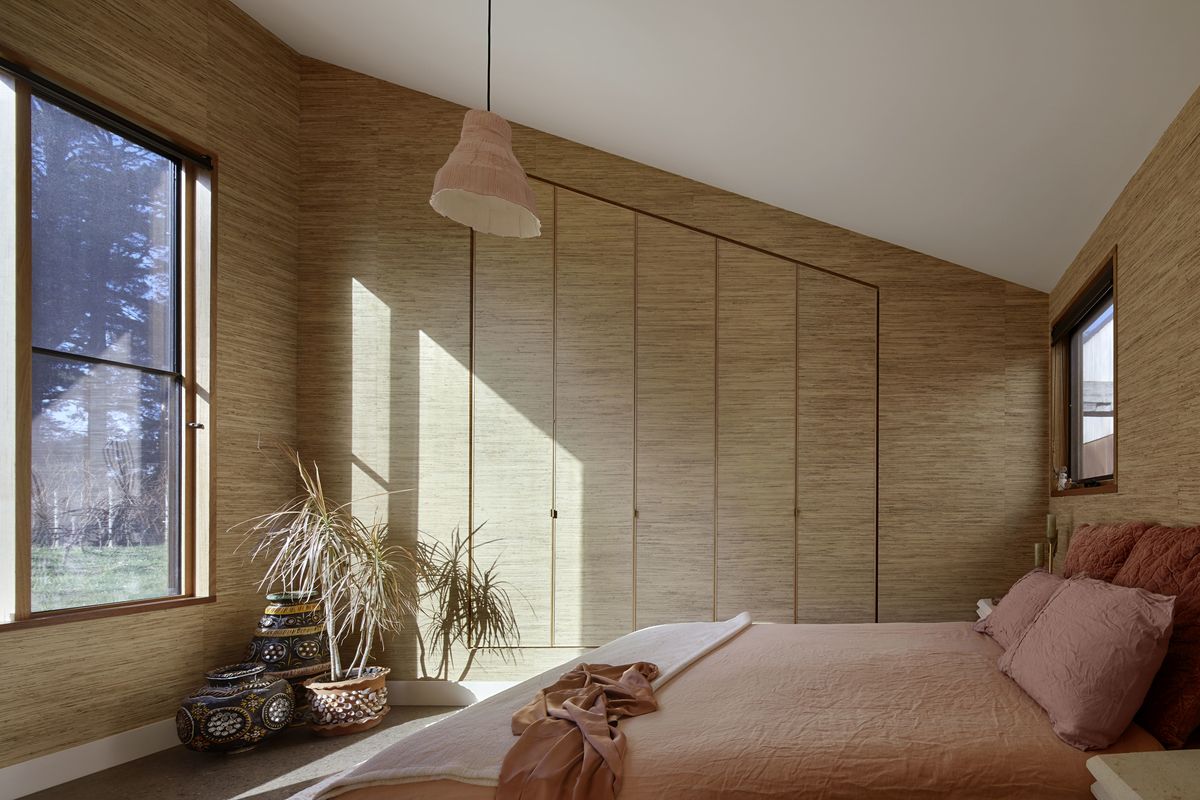 The simple skillion roof complements the slope of the land and creates a simple, self-cleaning roof for rainwater collection. A raked ceiling is exposed in the living area for an additional sense of space, with clerestory windows bringing morning light in from the east. A dramatic raked ceiling in the main bedroom makes the most of views and light, while ceilings are flat everywhere else, allowing the use of more cost-effective prefabricated roof trusses. 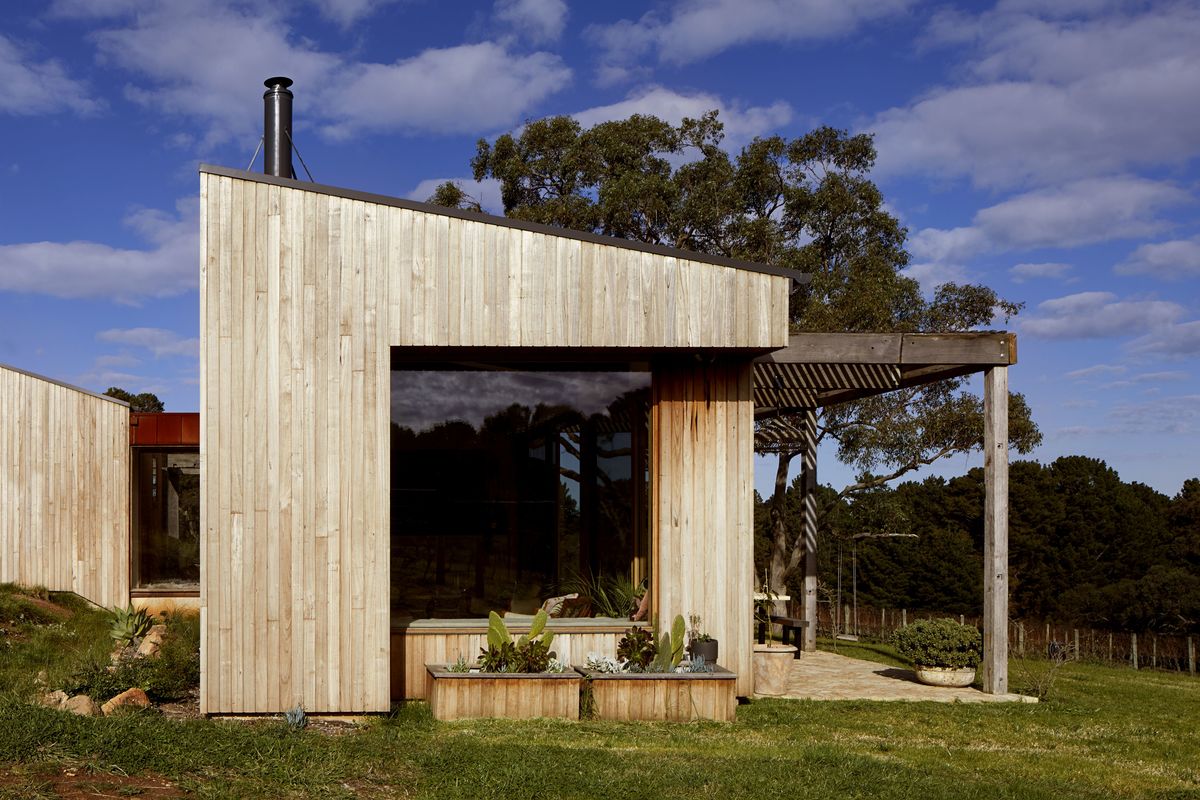 "Windows along the west are kept purposefully modest due to orientation, and where larger in the living areas, a timber battened pergola provides shade. North windows to living areas are set-in to create shade", explains the architect. 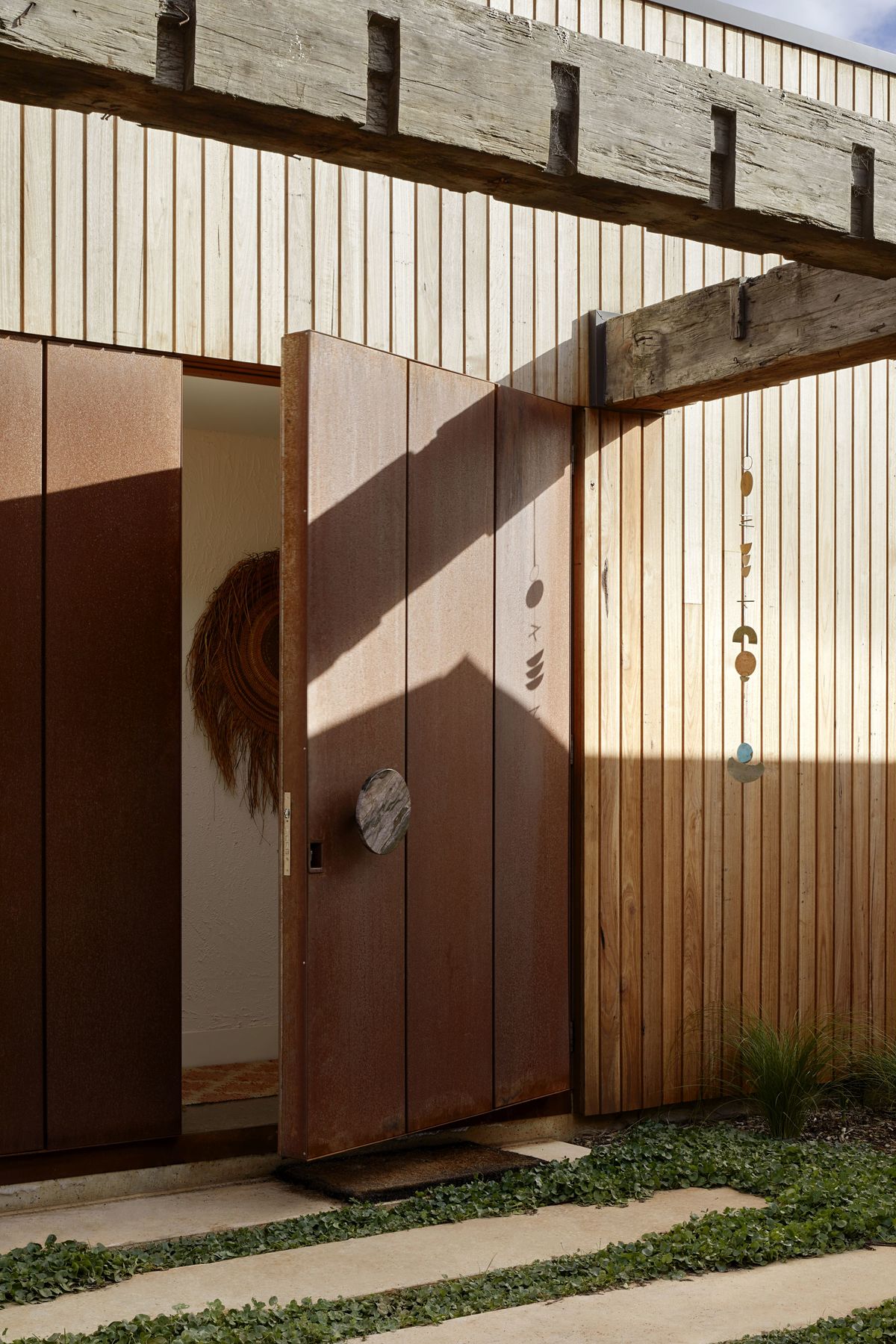 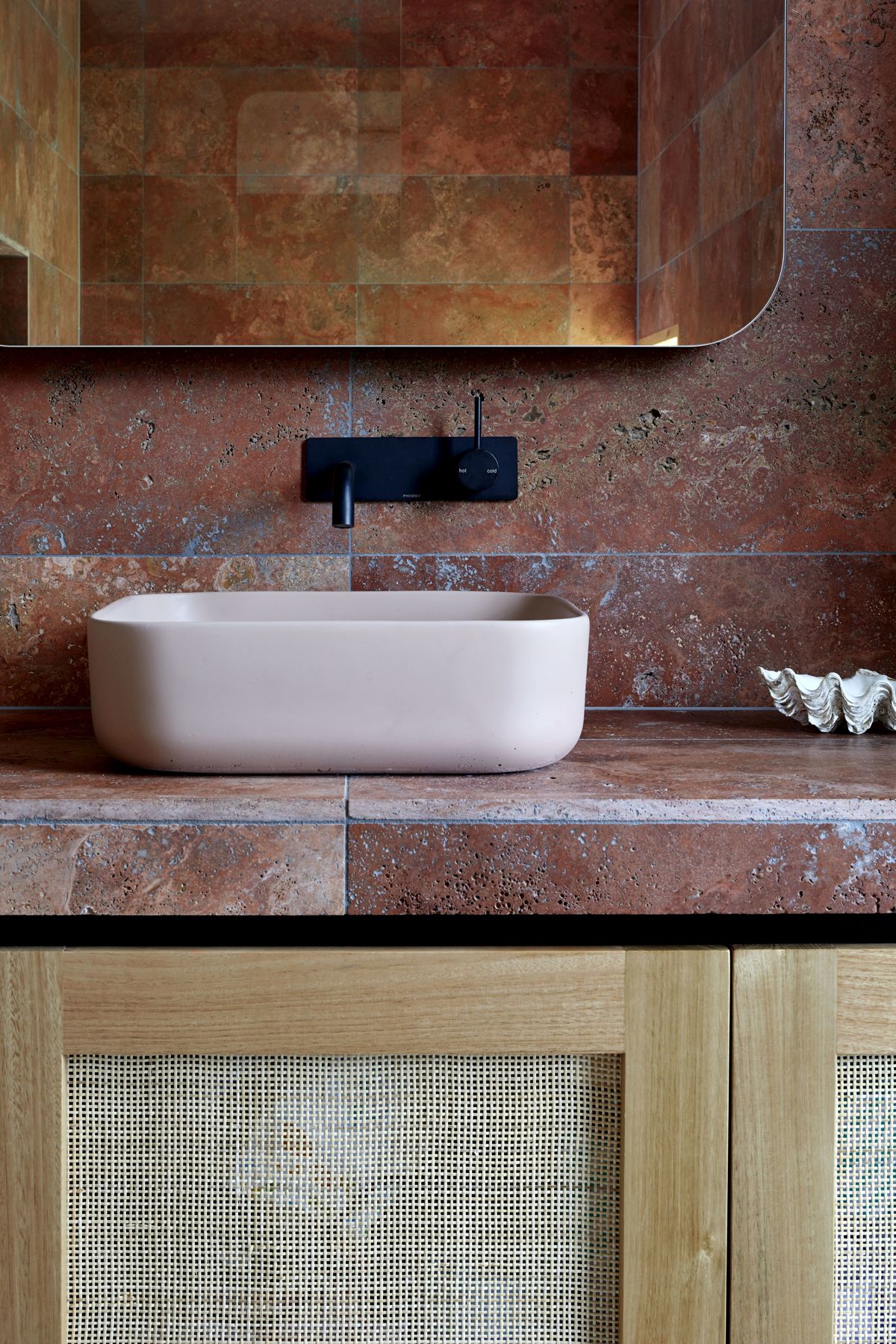 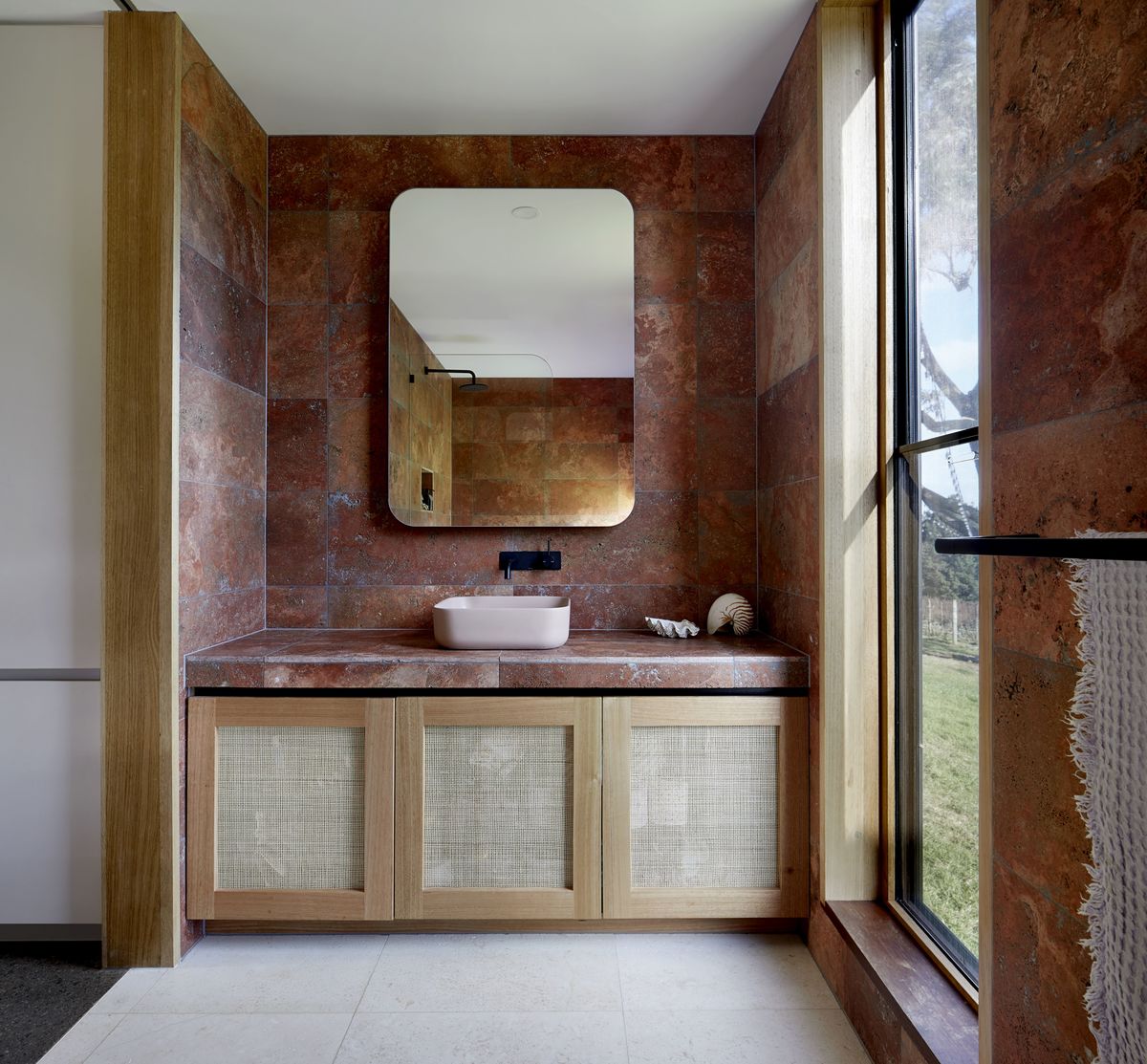 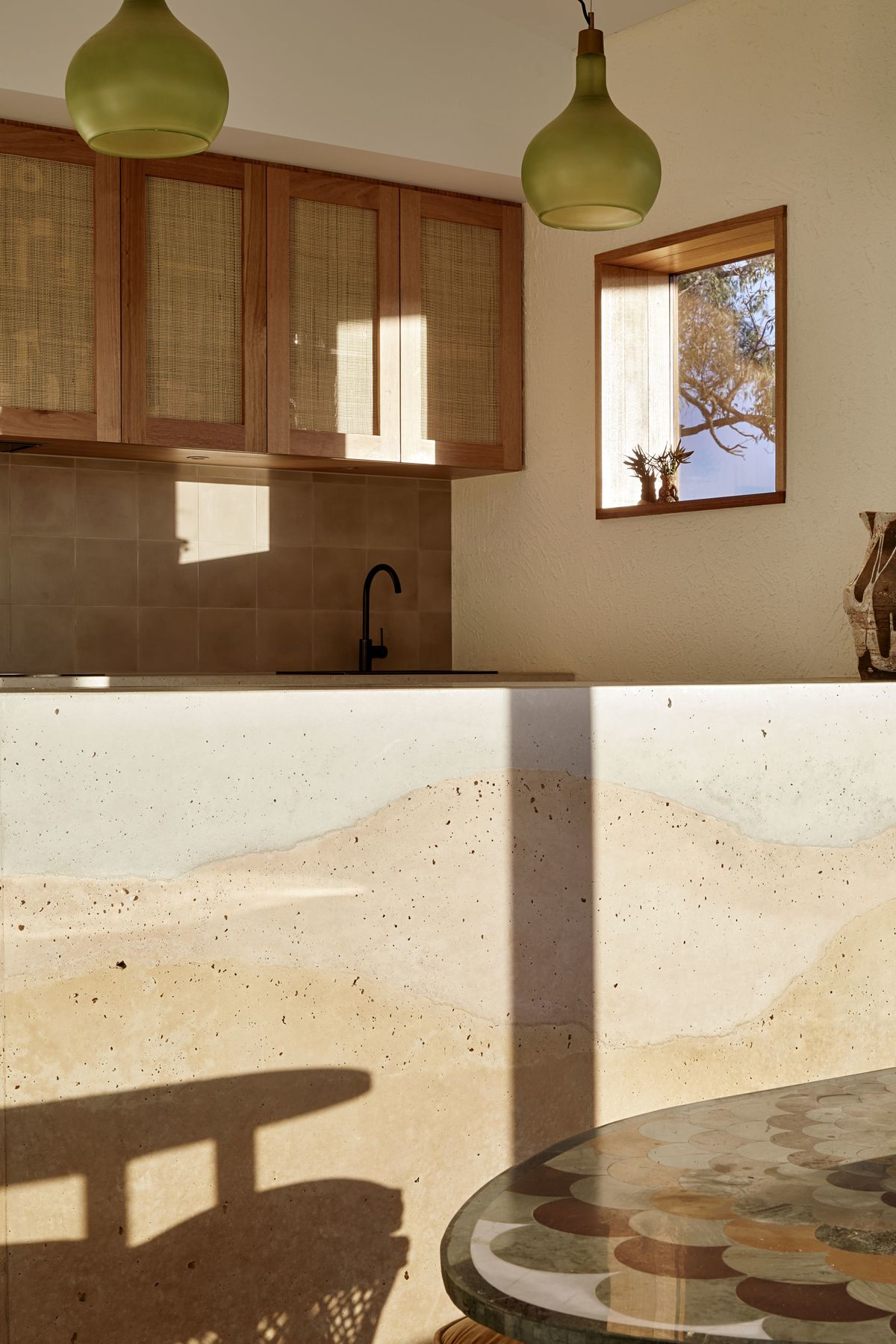 Naturally beautiful materials are used throughout, from the timber cladding outside which, over time will grey to help the home settle into the site, to the rusting steel entry doors which acknowledge the often harsh conditions and extremes a home must endure. In the main bathroom, red travertine tiles make bold statement while still feeling earthy and evocative of the local red earth. Similarly, the kitchen polished concrete bench is beautifully poured with three separately coloured mixes, reminiscent of layers of earth.

The home was designed to be off-grid so, while it was ultimately connected to the grid, the owners have since installed a 9.26kW solar array to offset their energy use. Water is collected in two 10,000 litre tank and a worm-farm style septic tank turns waste into fertile soil for the garden. "Our dream is to be able to be totally self-sufficient and carbon neutral in the not too distant future", explains the client. 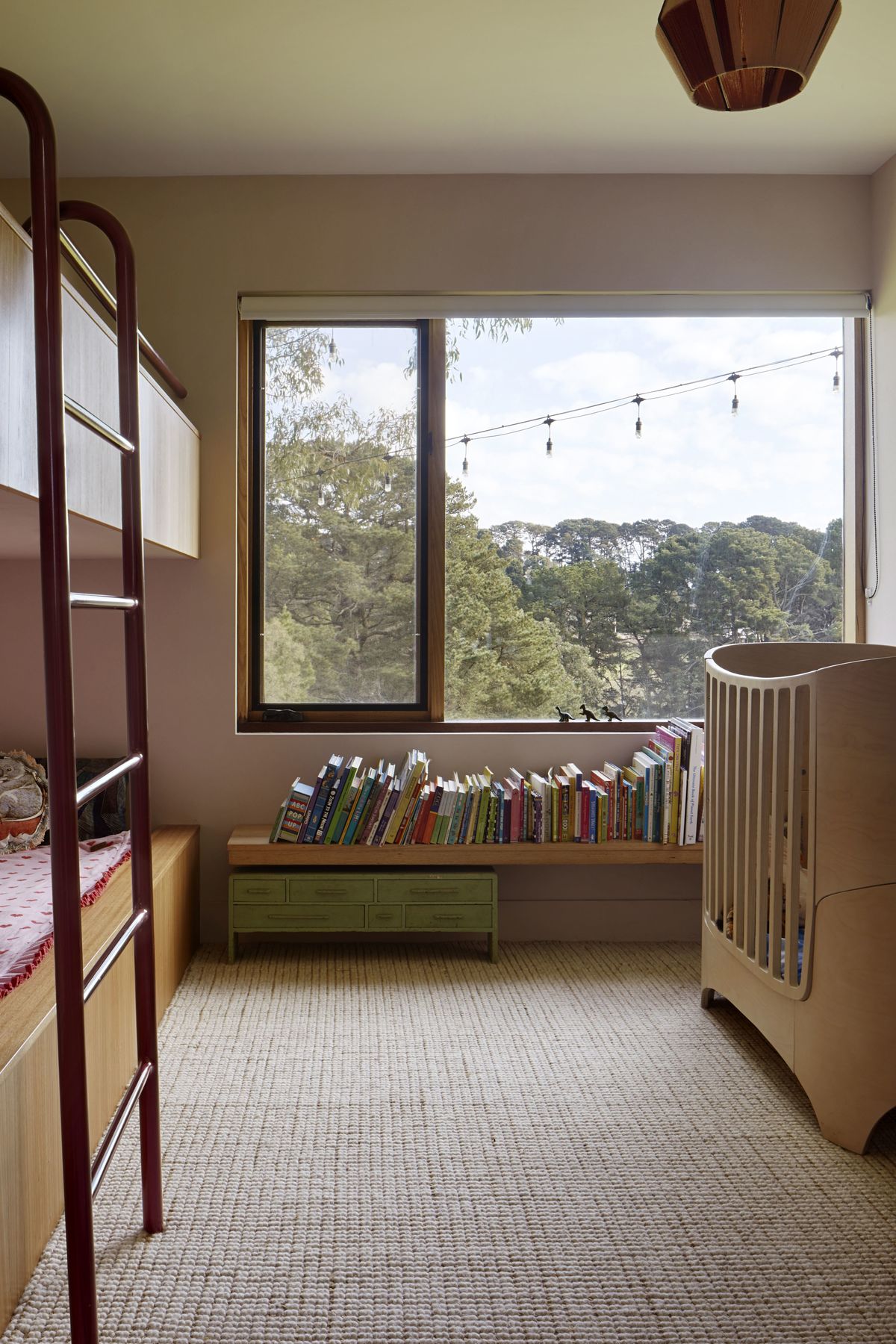 "When we built the house, we imagined we would have it as a weekender until the kids were ready to go to school – still a few years away – and then we would move here from the big smoke. The house was finished late 2019 and we had such a great first summer on the property that we started to consider if we could move down even sooner. When Covid-19 came along, it really accelerated our decision making and we packed everyone up in record time, popped it on a truck and suddenly this was our permanent spot! The transition was really smooth and while we still love our St Kilda house, this place has felt like home since the beginning. One of the hesitations we had about moving down here was the commute to the city, but we have both been working from home since the move and we believe we’ll continue to work flexibly once the pandemic passes. We have everything we need right here: full mobile coverage, internet and, of course, family babysitting!" 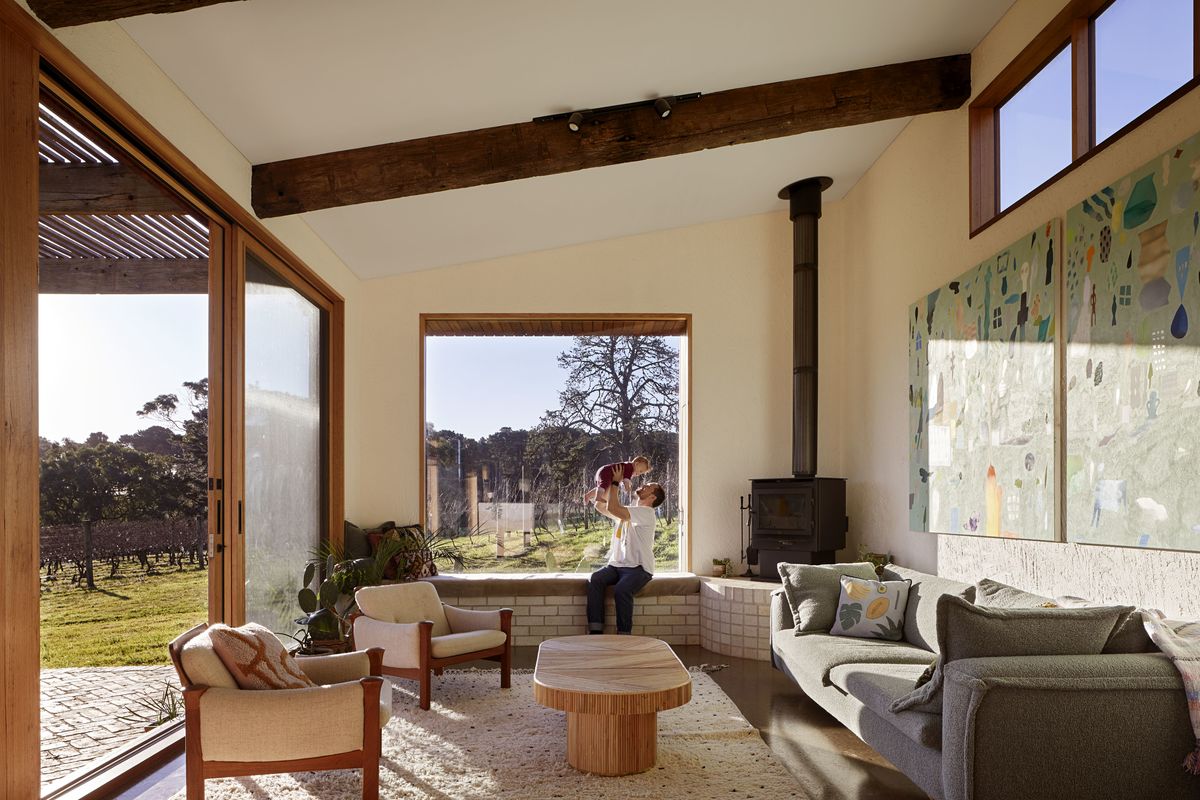 It's no wonder you'd be keen to move straight in with this beautiful house in a beautiful part of the world to call home. 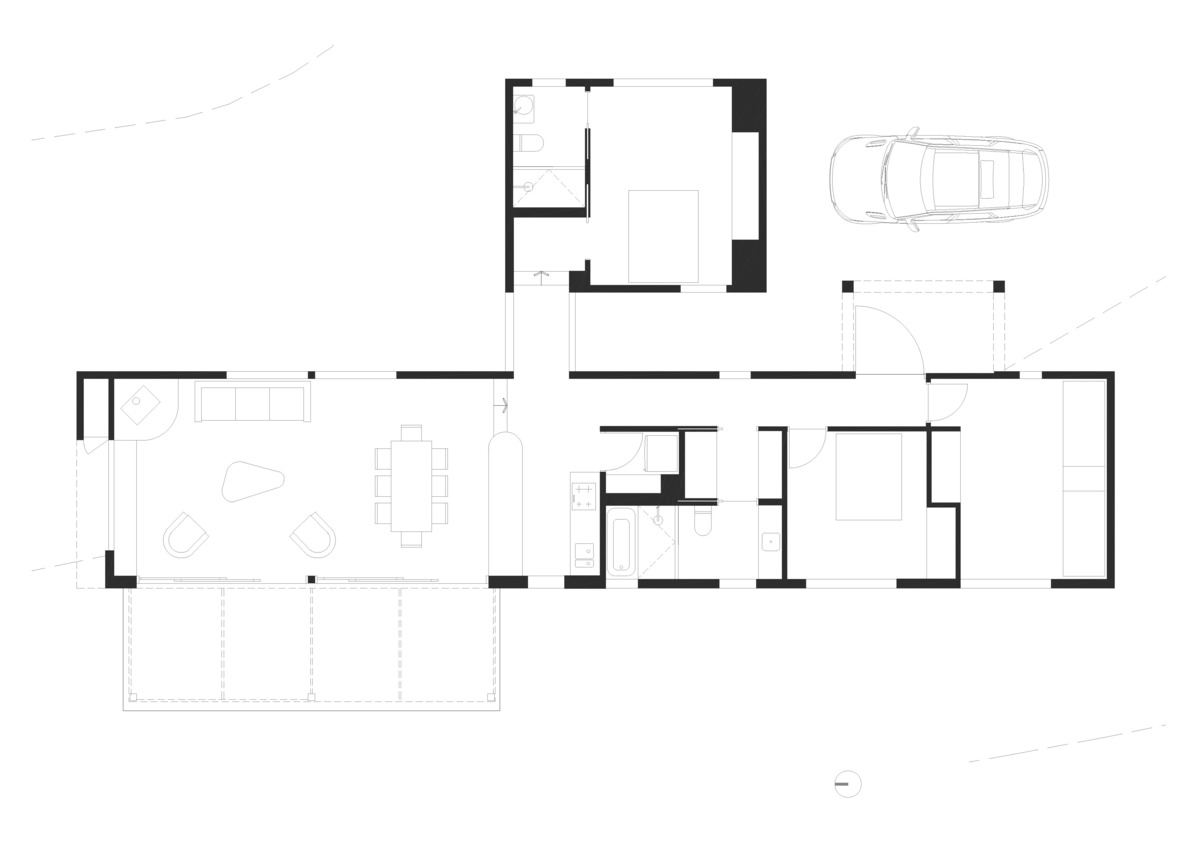 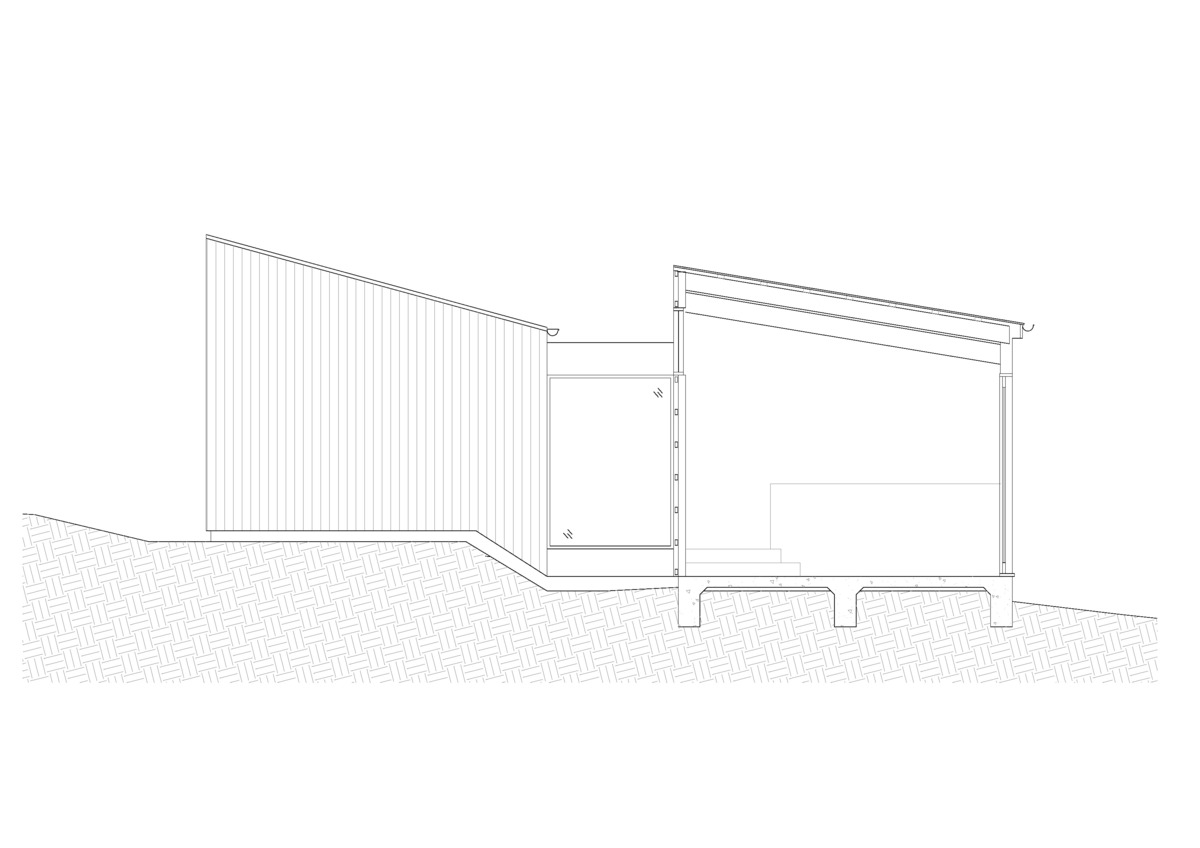 Tell us what you love about Merricks House...