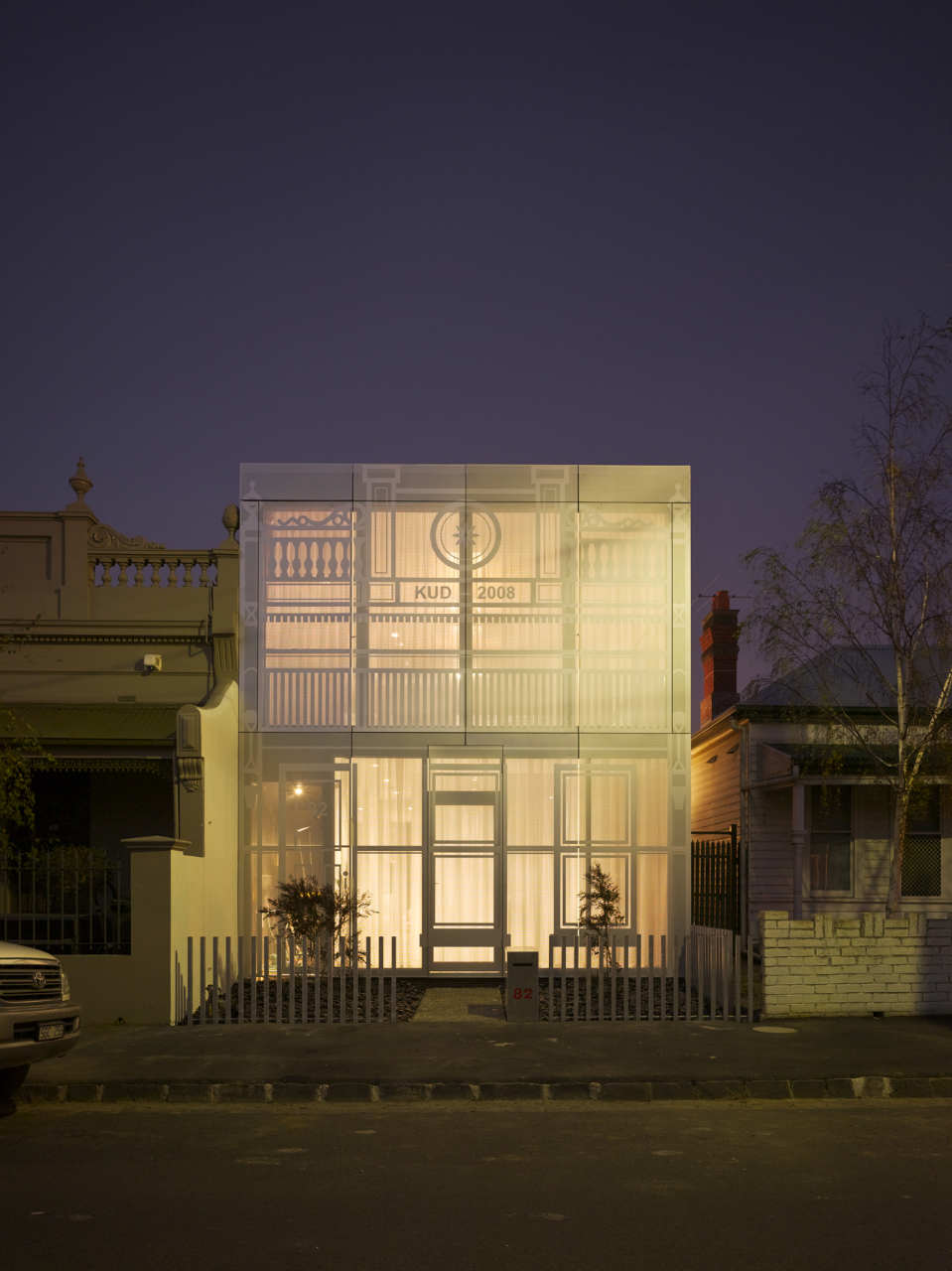 A Modern House That Retains Some of the Charm of Yesteryear

Do you prefer the charm of traditional homes? But you also like to have a modern kitchen, spacious rooms, and open plan living areas. Perforated House proves you can have both -- even if you build a new house from scratch.

Architects, Kavellaris Urban Design (KUD), wanted to celebrate the history of the area and the stylish flourishes of the Victorian era. But not by designing a cheap imitation of a terrace house. People can sense a fraud from a mile away -- these creepy Chinese copy-cat towns are proof of that!

Instead, KUD took the elements of a traditional terrace house and reinterpreted them. Achieving a home that respects the past and also overcomes some of the problems of homes from that era. Unlike a typical terrace, this house is spacious, filled with light, breezy and packed with modern features.

Starting From Scratch in an Old Neighbourhood

This was a rare site. A vacant block in a well-established neighbourhood. Brunswick is an inner suburb just 5km from Melbourne's CBD. An opportunity to build a home from scratch in an old neighbourhood like this doesn't come along very often.

Perforated Facade a Surprising Nod to the Past

The facade is the most striking part of the house. It uses the image of a traditional terrace, created by perforating steel. This ties it in with the neighbours, without copying them. But luckily there's more to the facade than a pretty picture. The combination of perforated steel, glass and curtains, open, fold and slide to let light in, provide privacy to the family, create an open air living space, or act as lantern for the street. It's a multi-functional and versatile system. 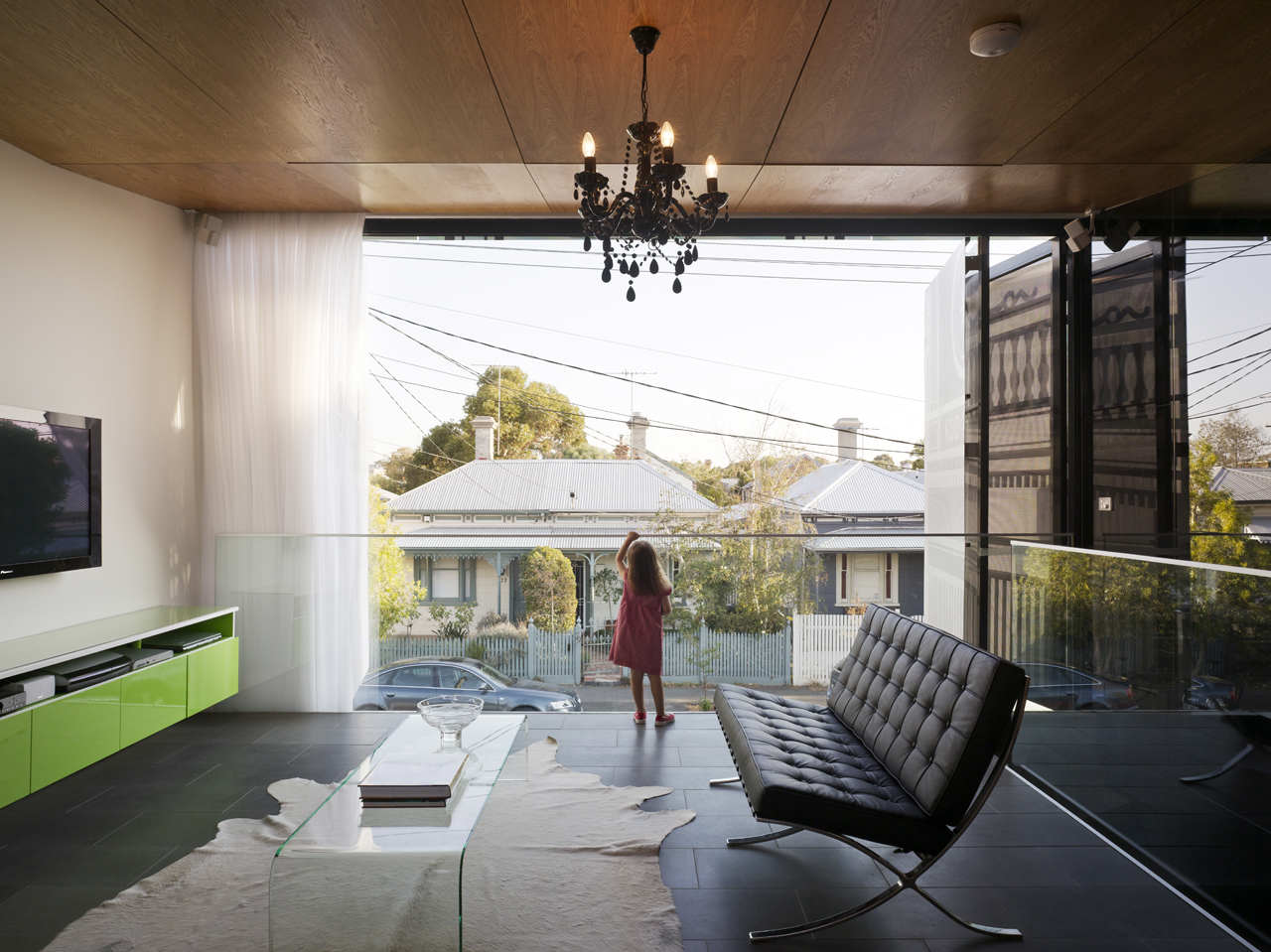 Open-air Pavilion: Both the North and South walls open completely to let light and breezes in, making the upstairs living area feel like an open air pavilion. 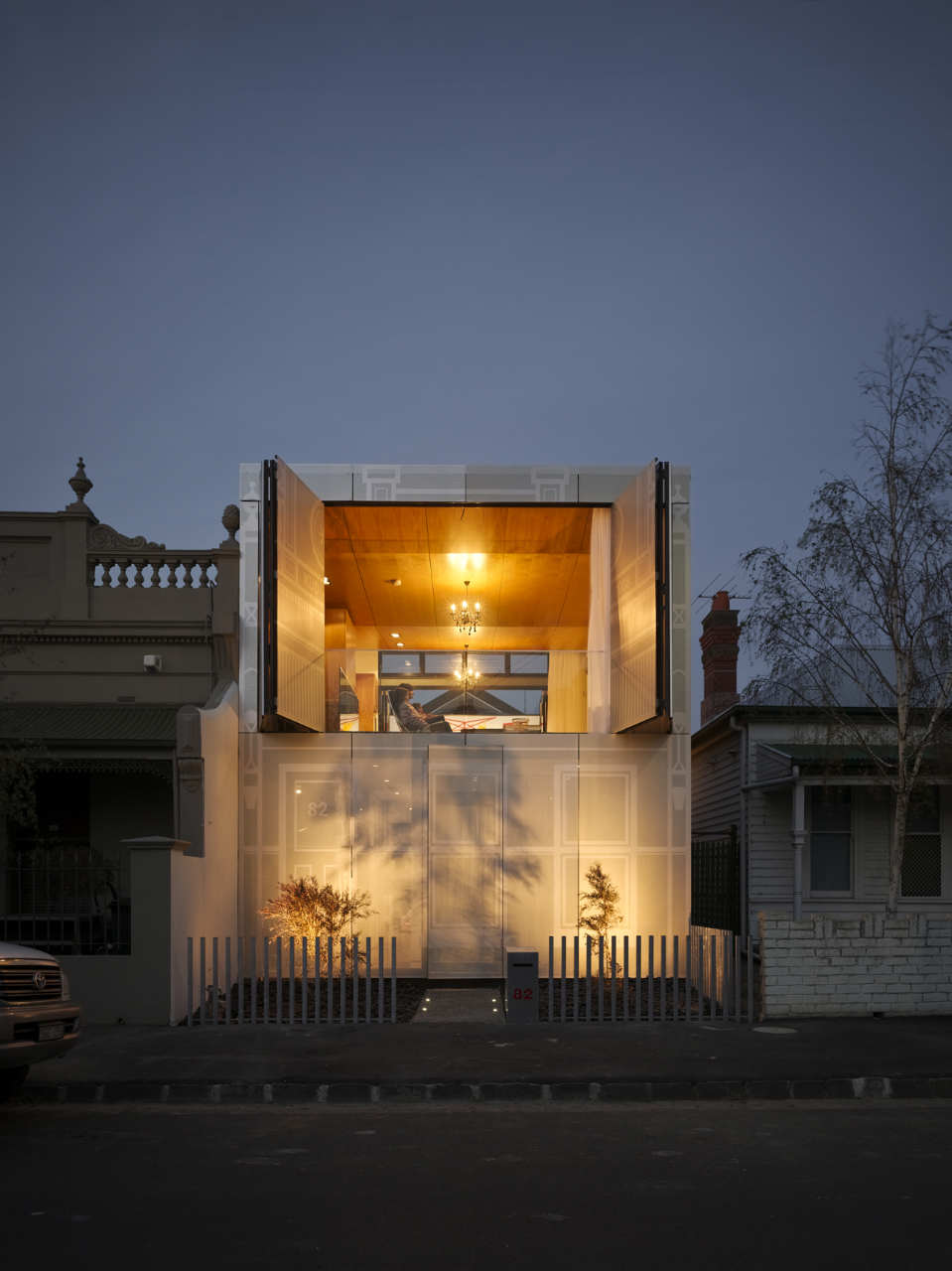 Versatile Shutters: The facade opens and closes to regulate light, ventilation and views/privacy. The feel of the home changes accordingly -- all based on the homeowners needs. 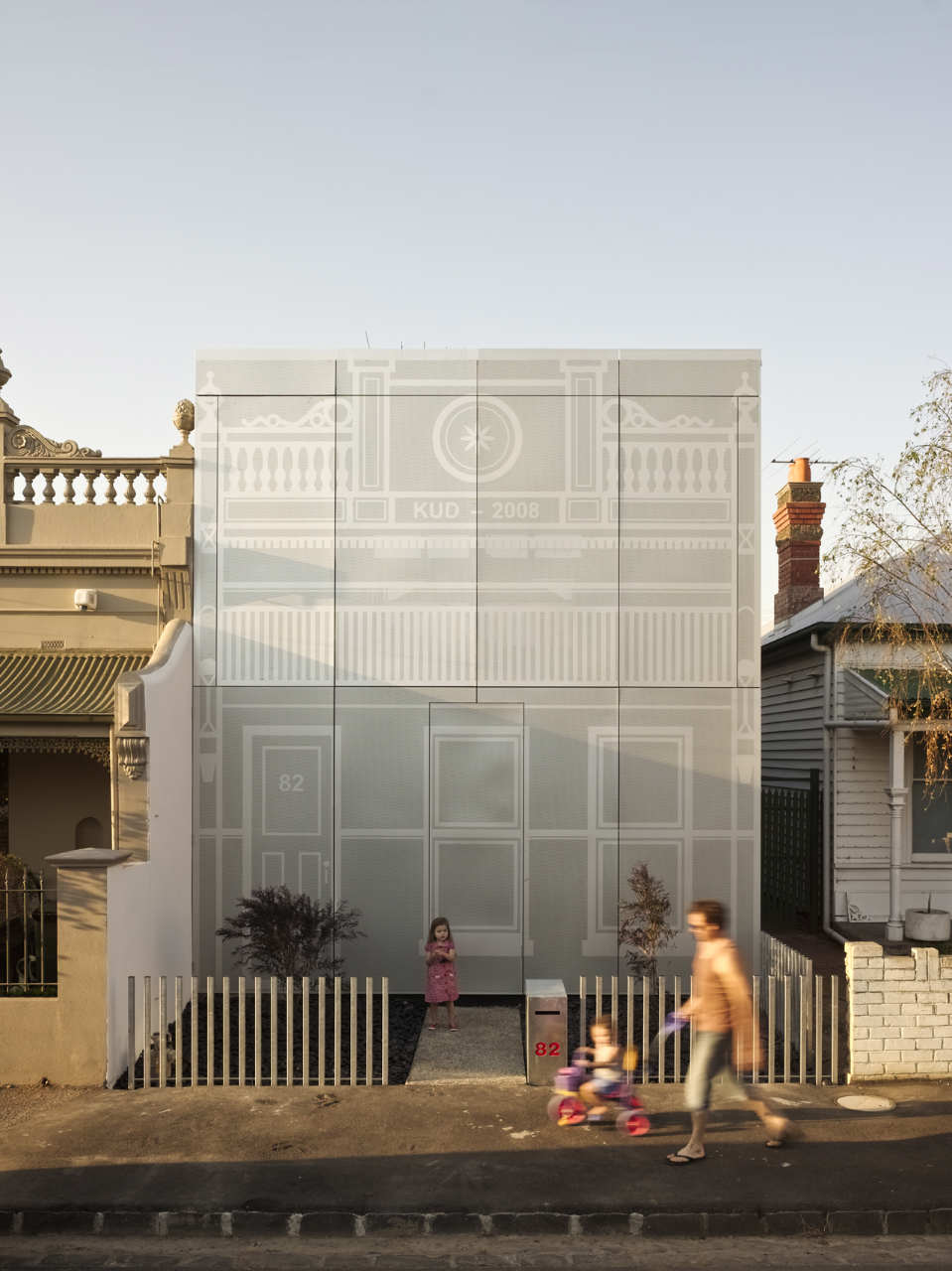 Terrace House for the 21st Century

Inside, the traditional terrace has been re-imagined for modern living. The architects had the benefit of starting with a clean slate. So instead of going down the traditional road of creating an extension at the back of the terrace, they were able to rethink how it's best to live on a skinny, North-South block.

Instead of placing the living areas on the ground floor where they don't get access to natural light, KUD flipped the two stories. Yes, it means you have to carry your groceries upstairs, but it also has it's benefits in terms of light, ventilation and privacy. 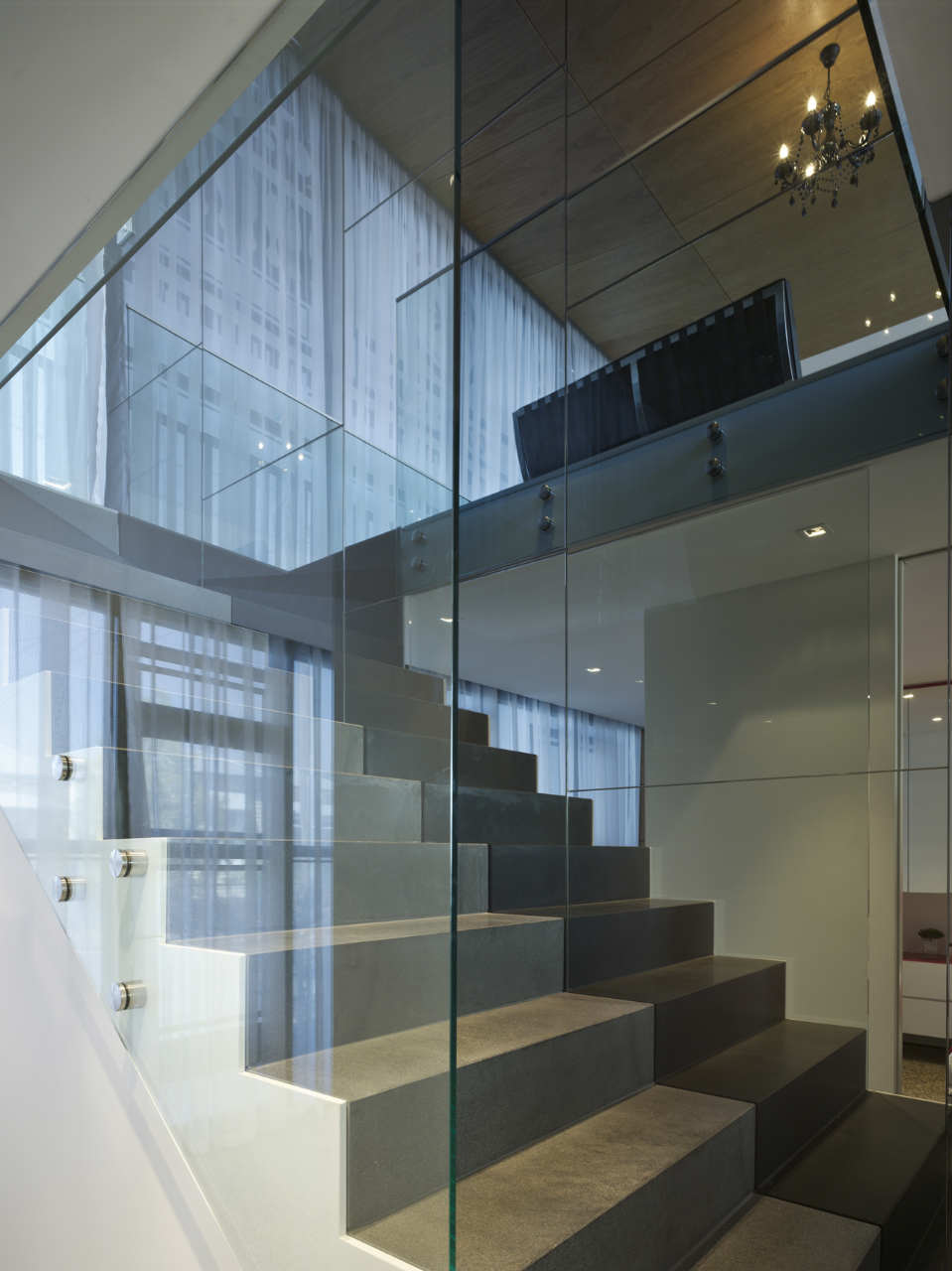 Bouncing Light: Glass and reflective surfaces bounce light and help the space feel larger, even on the ground floor with limited access to natural light. 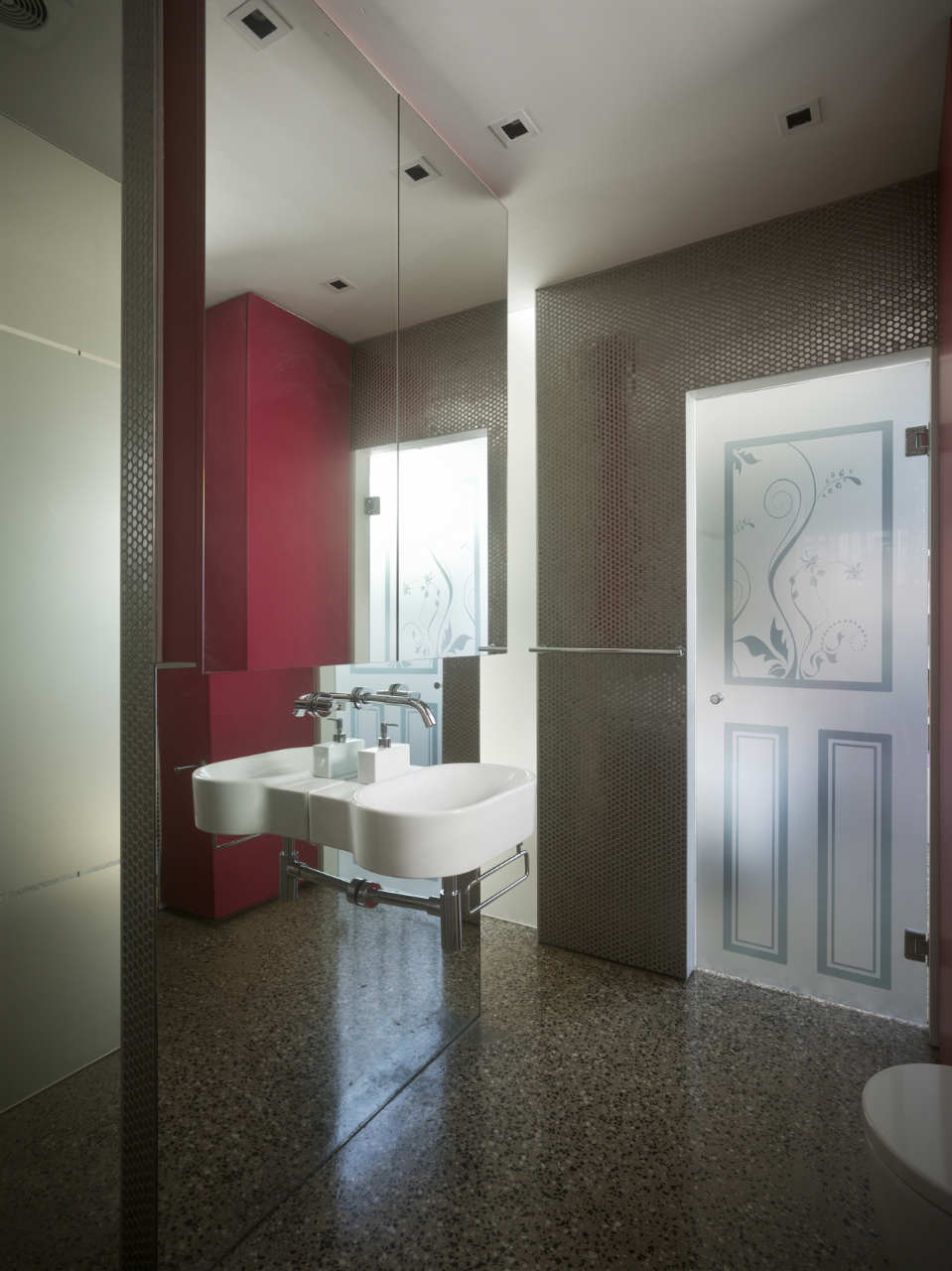 Consistent Imagery: Small, circular tiles are used in the bathroom. These help to bounce the light, but also tie into the perforated dots on the facade, telling a consistent story throughout the home. The frosted glass door also mimics the ornamentation found in period homes -- infusing this home with character. 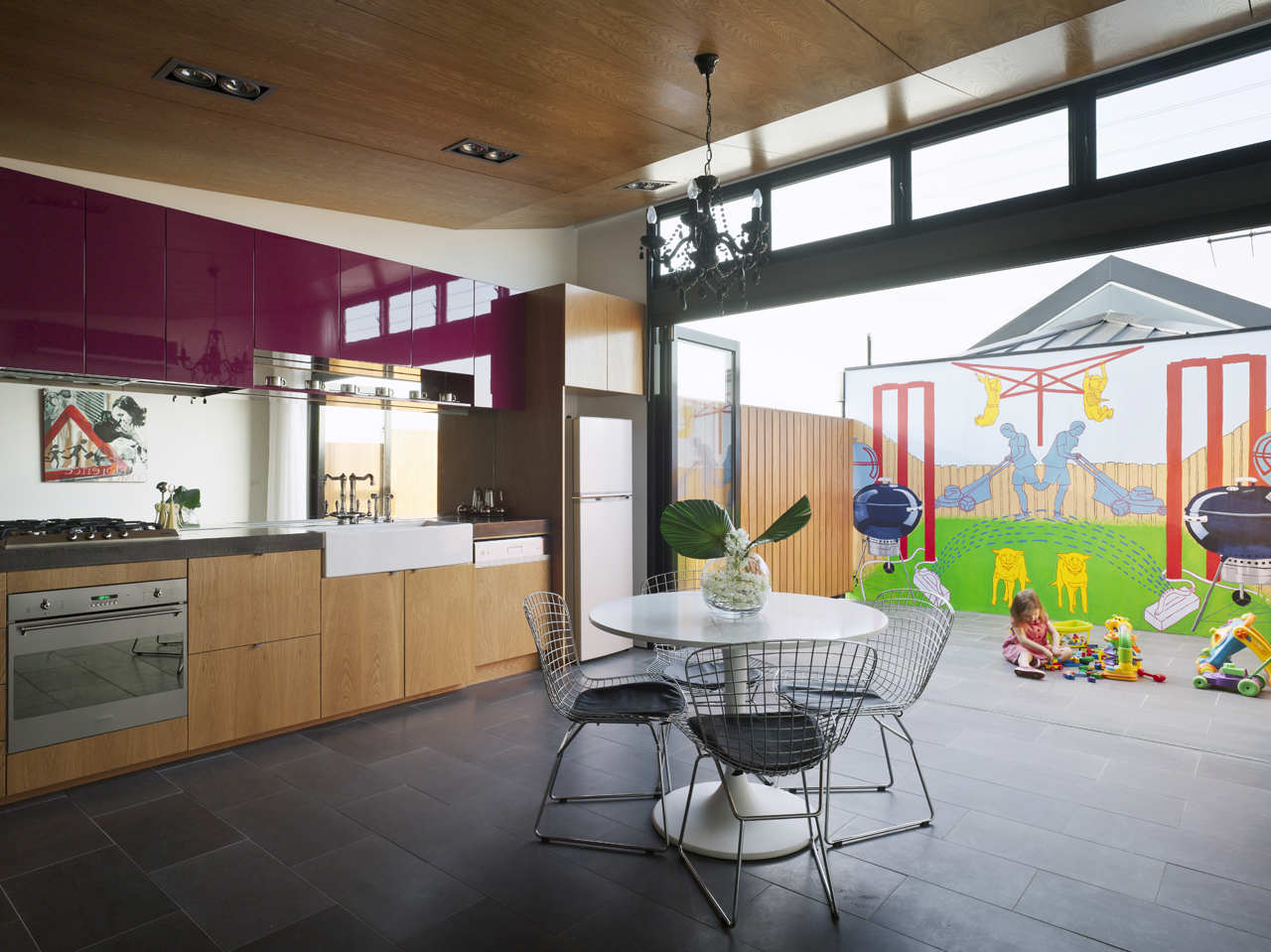 Light and Bright: The ceiling lifts up to let in more North light. A seamless connection to the outdoor terrace makes the space feel larger and more open. 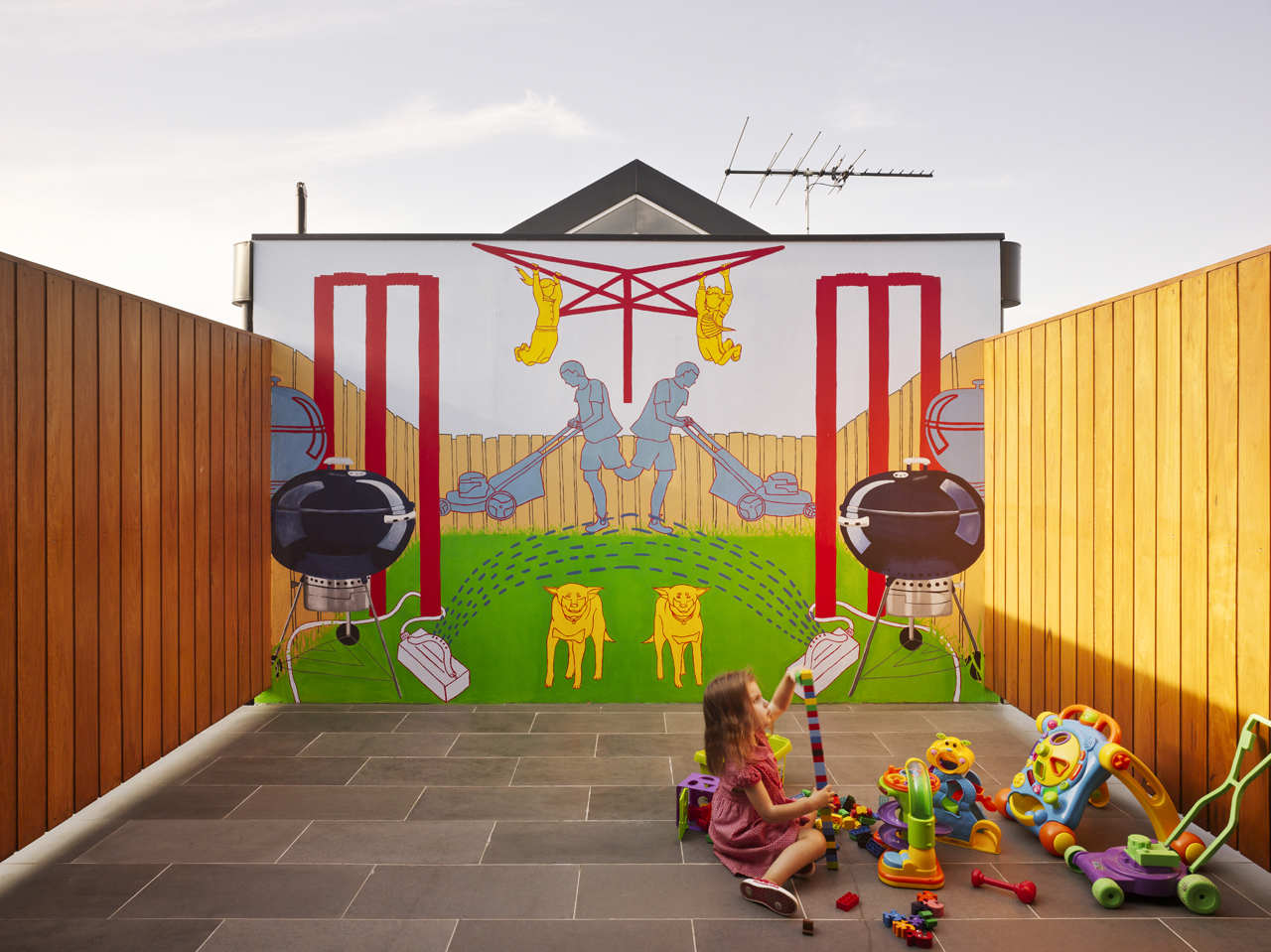 (Not) A Typical Aussie Backyard: The outdoor terrace is far from your average Australian backyard which has such strong cultural meaning. A bright, cheeky mural has fun with what we associate with a traditional backyard and how that might change as we start living in more dense urban areas.

Terrace House for the 21st Century

KUD didn't just accept the ideas of a traditional terrace. They carefully analyzed the problems with this style of housing and developed an alternative to suit modern needs. Ultimately they have achieved a home more spacious, sunny and open -- more fitting to our lifestyles -- than your average terrace house. 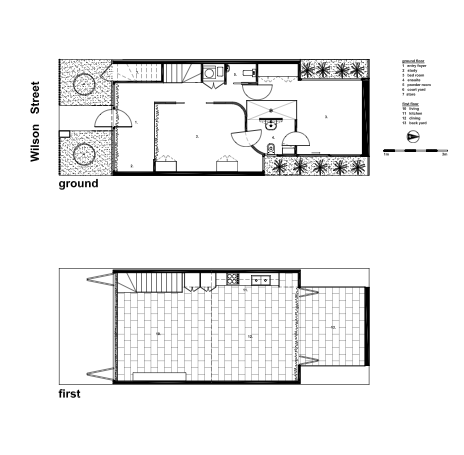