Every site has its assets and its drawbacks. The aim of a quality architectural design is to highlight a site's good qualities and manipulate the spaces, orientation and openings so the drawbacks cease to be an issue, which is exactly what Rob Henry Architects has achieved with Stepping House... 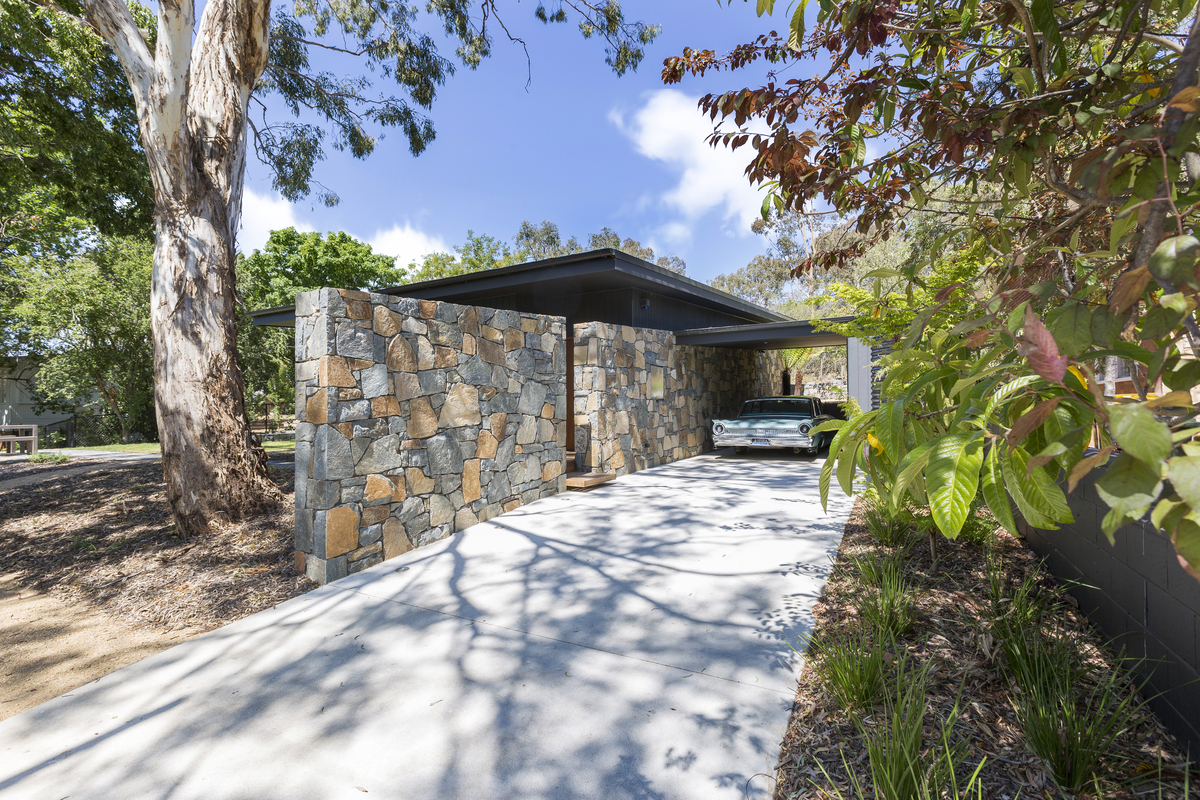 On a battle-axe site backing onto Mt Ainslie in Canberra, this project enjoyed a beautiful natural location despite its constraints. "Battle-axe blocks in the ACT pose a unique challenge in the design process," explains the architect, "as they lack an address and their ‘backyard’ is often overlooked by a public reserve." In spite of this challenging site, the architect has managed to create a home that feels private and peaceful. 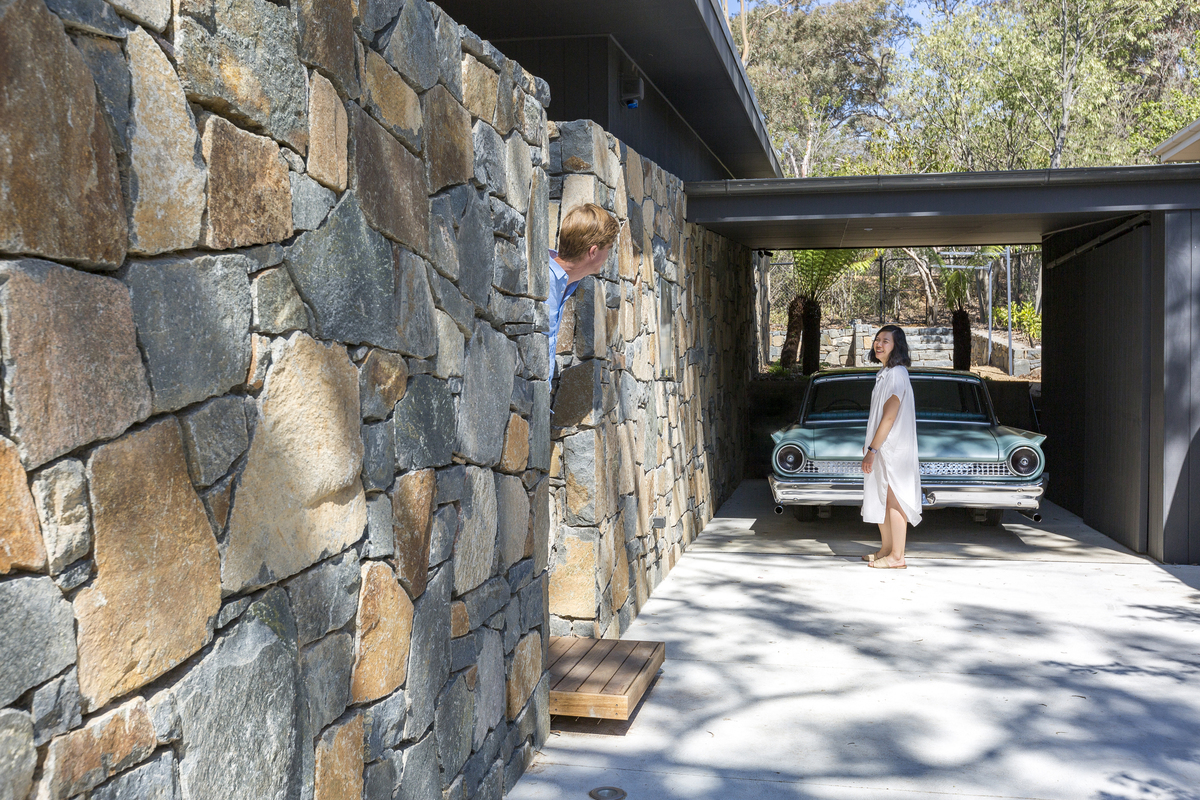 The area is characterised by mid-century homes, "a small mecca of mid-century housing, many of which on the reserve side paid homage to the landscape setting, offering view through the site to the bushland behind. Whilst heritage overlays were applied to many sections of Ainslie, sadly no one thought about the importance of our mid-century dwellings. And thus they have been knocked down and replaced with overscaled, dominant, and loud buildings that block a visual connection with nature." 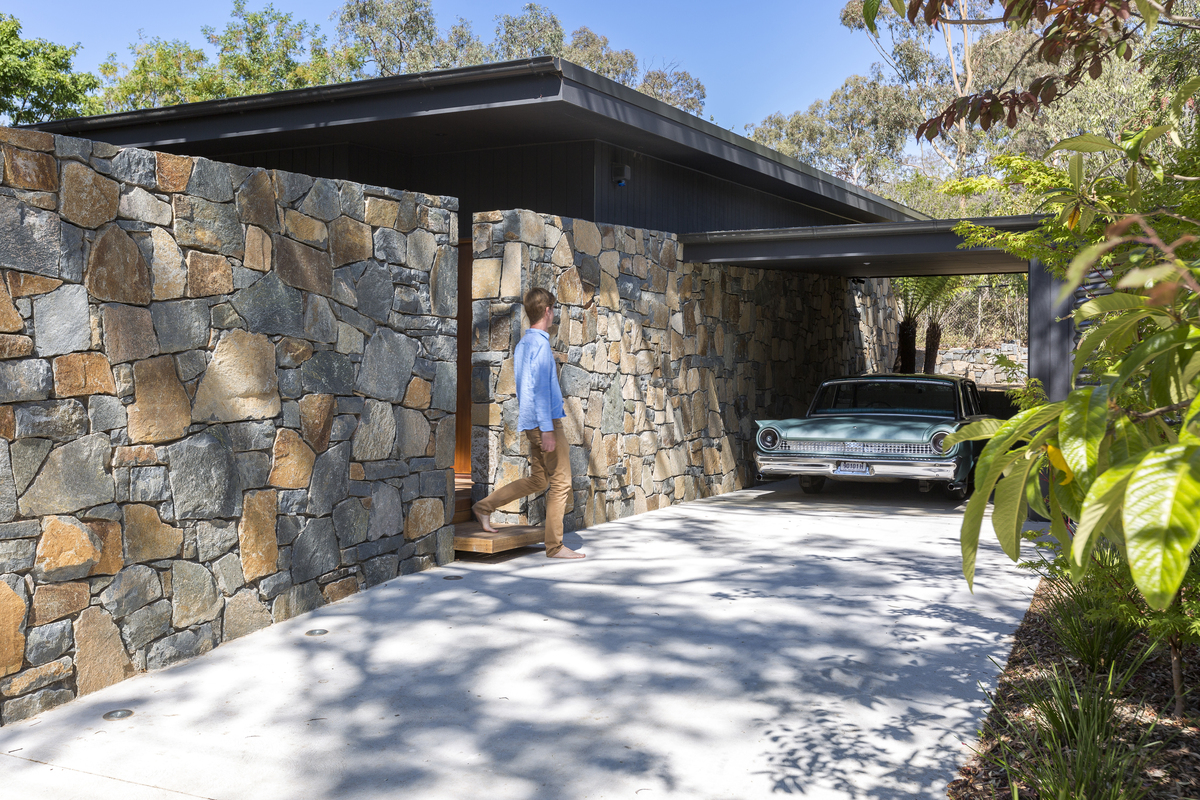 An original home on the site, like many of the rear homes on these battle-axe sites, was a "poorer cousin" of the mid-century gems facing the street. "An asbestos clad box with no northerly windows" with extensive overland water damage thanks to being built into the sloping site, the home was beyond salvation and needed to be demolished. But, as the architect explains, "this didn’t mean we should give up on the core value that underpinned the mid-century predecessors of this neighbourhood of harmony with landscape and modesty in footprint and inclusions." 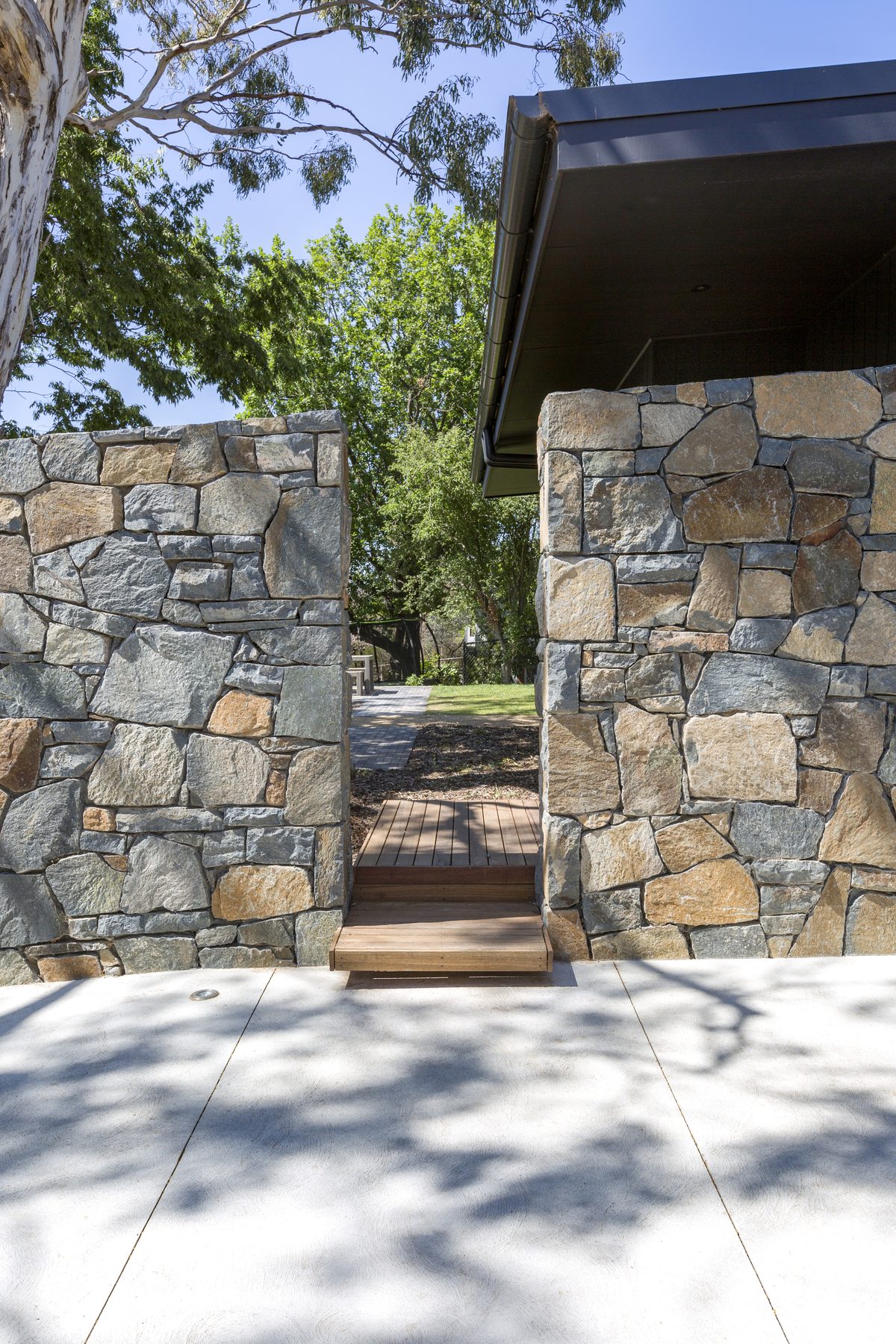 "On approach, the house is not visible, sheltered by a robust stone wall that divides public and private and prevents overlooking from the large adjacent dwelling. A narrow slot in the wall and projecting deck are the only clues to discovering the entry." 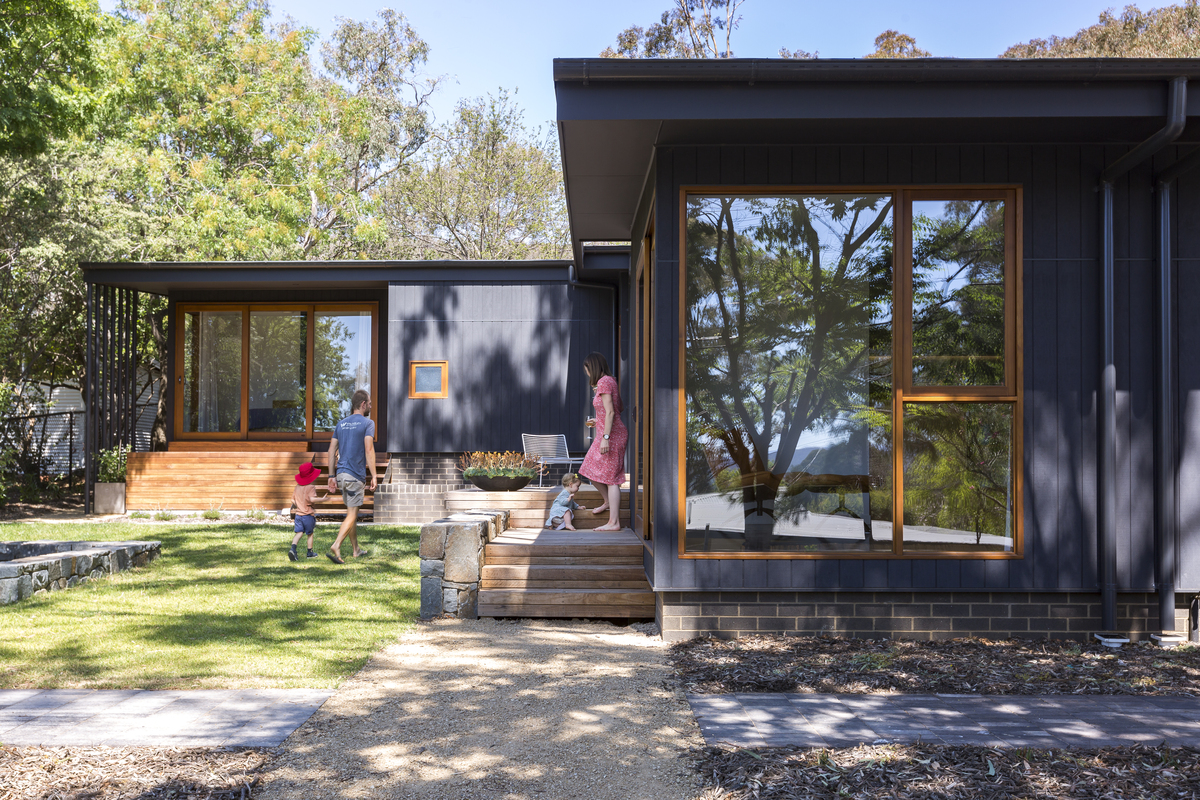 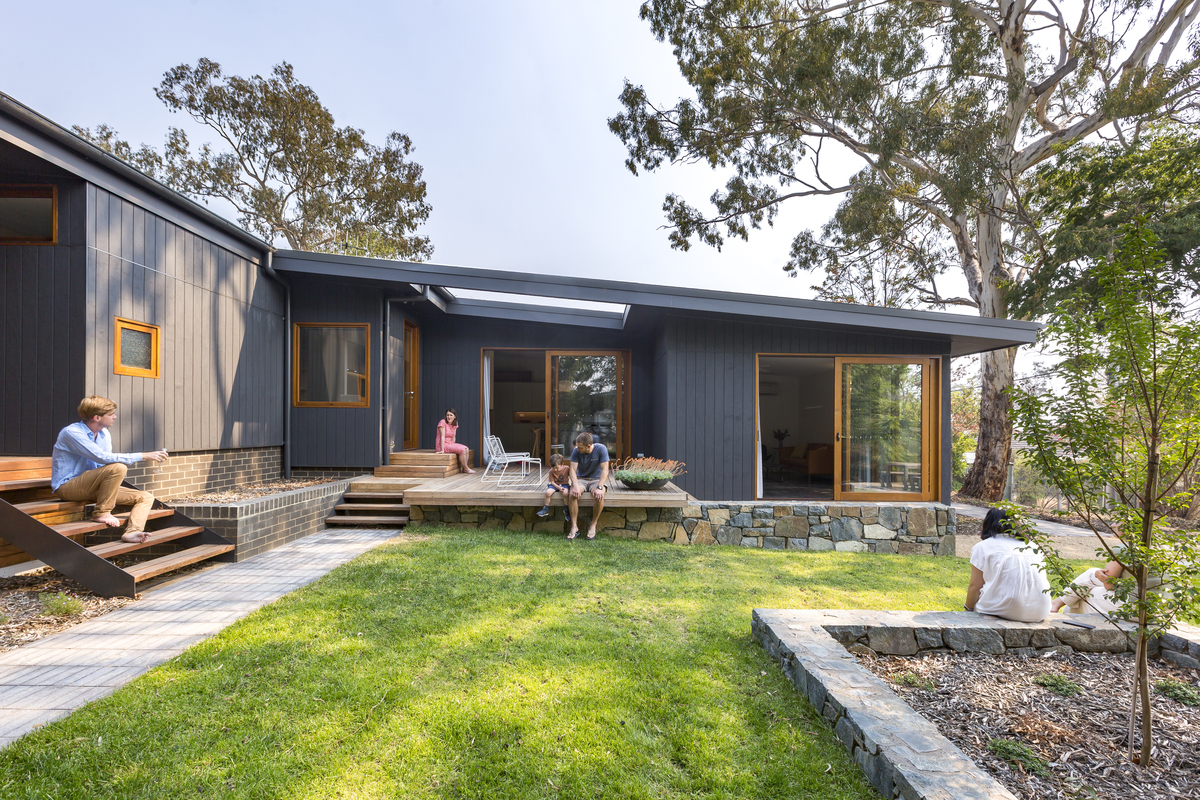 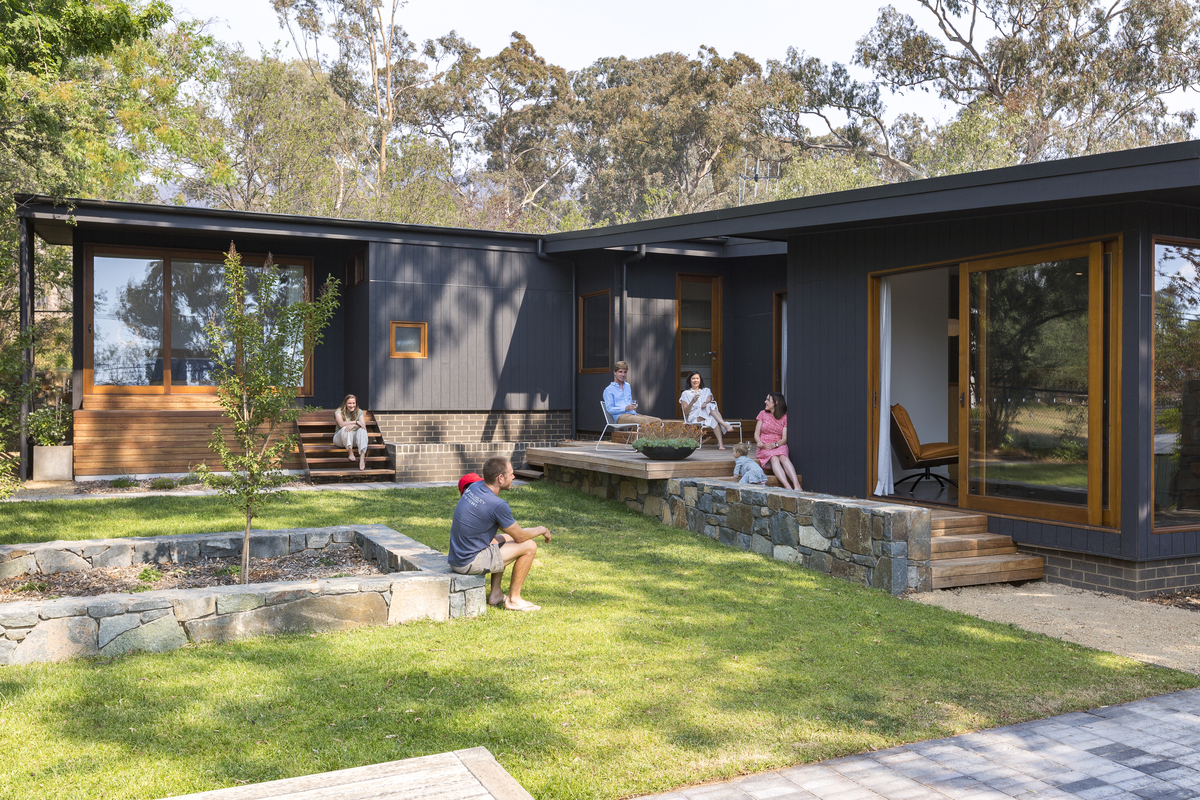 The L-shaped home is designed around a courtyard which brings northern light into the home and helps to shelter the private outdoor space from passers-by in the reserve to the rear. As the name suggests, the home is stepped to follow the natural lay of the land, stepping up as you move from the front to back. 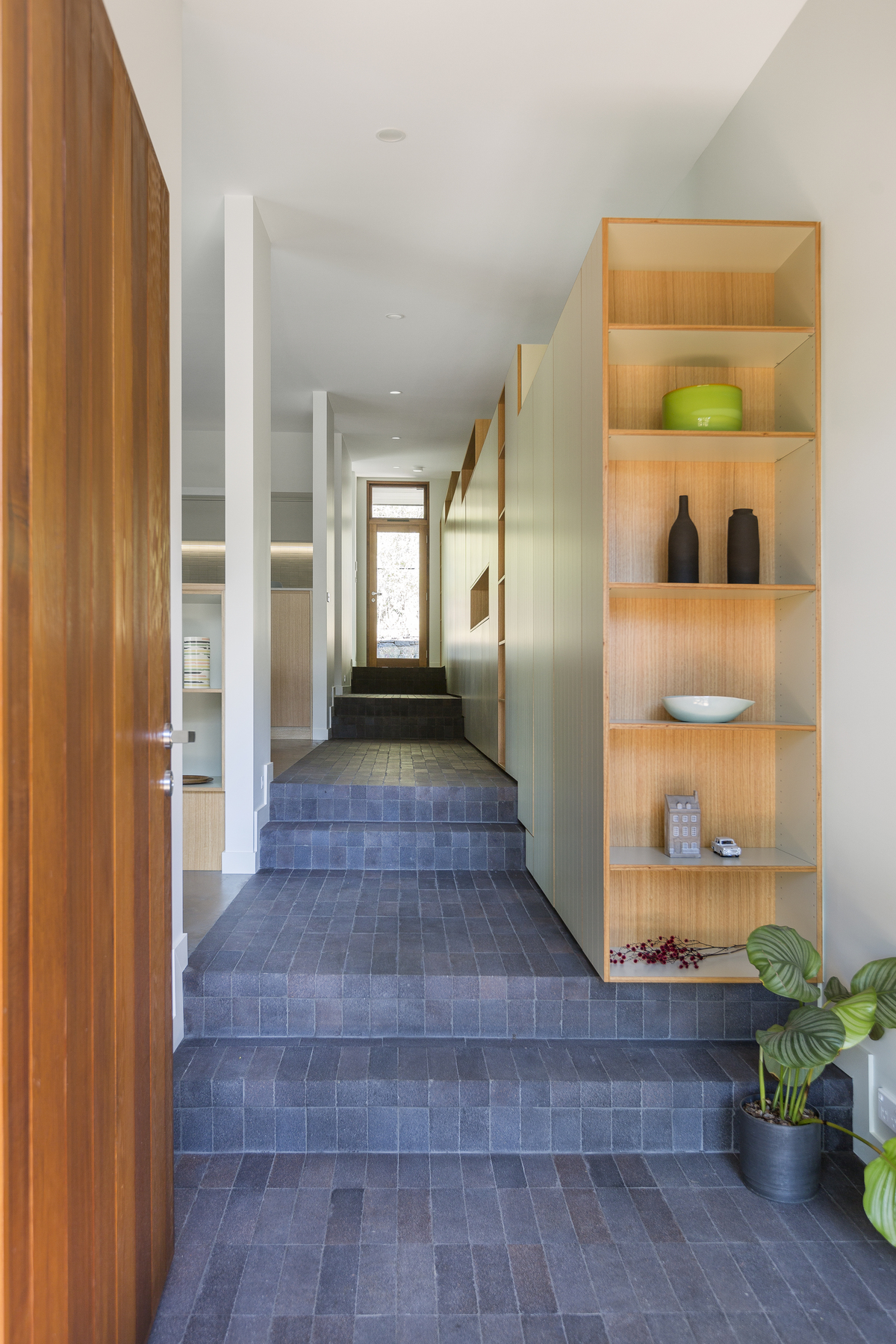 This axis (very Canberra) is defined by a brick floor which creates a sense of celebration and occasion as you move through the home with a window at the end highlighting the reserve beyond. 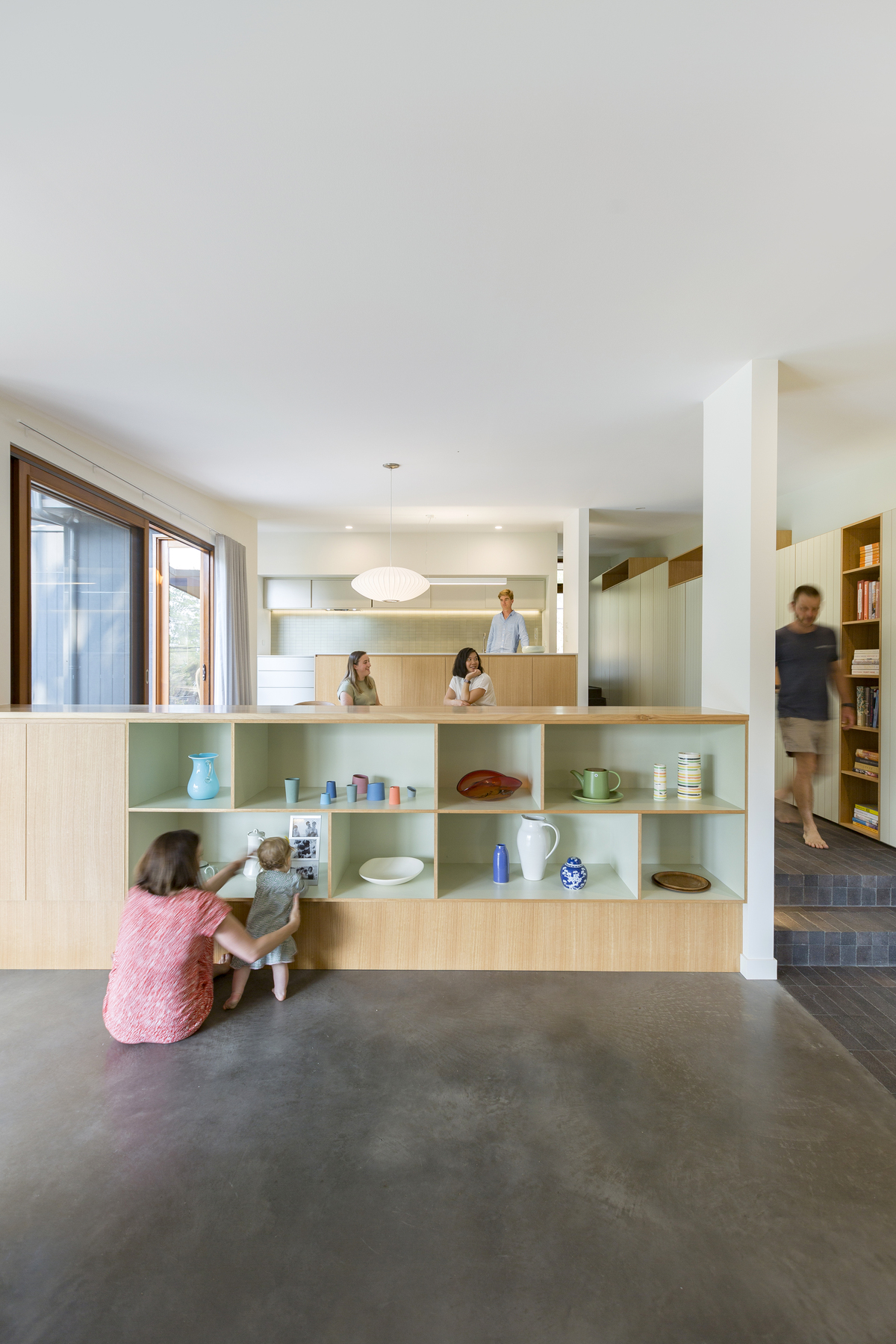 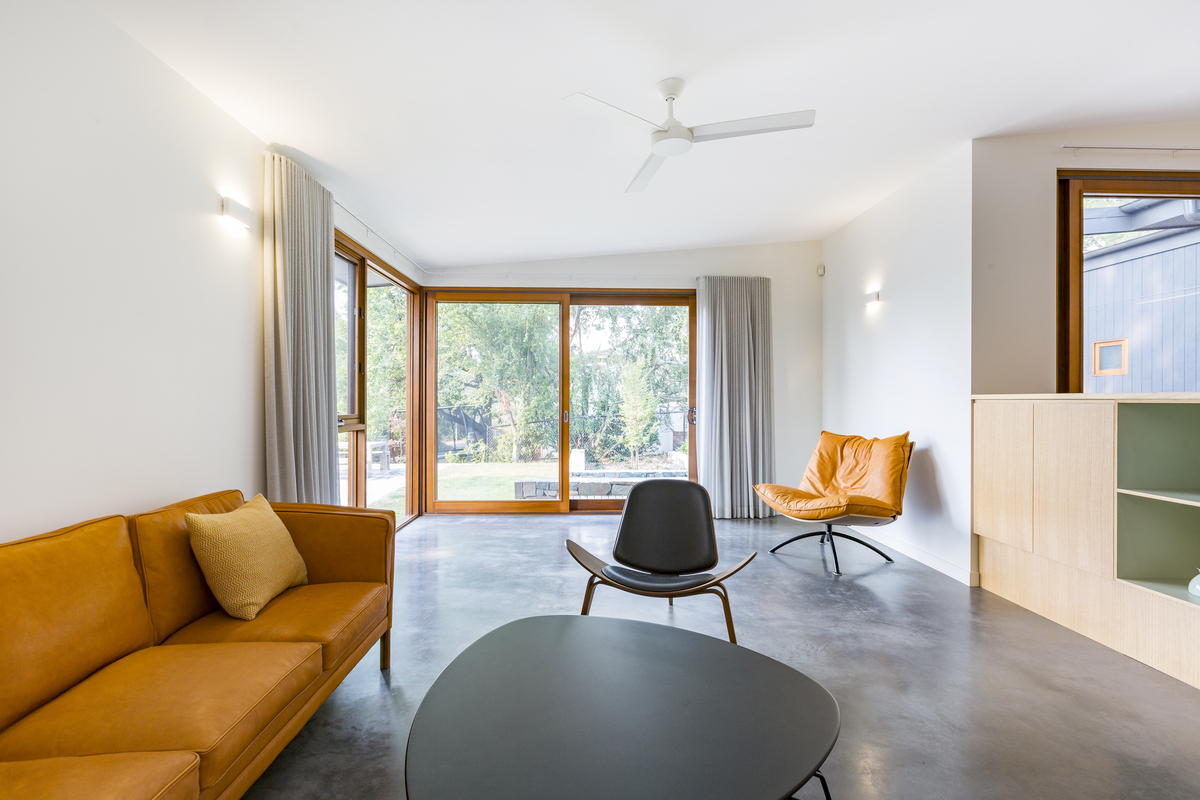 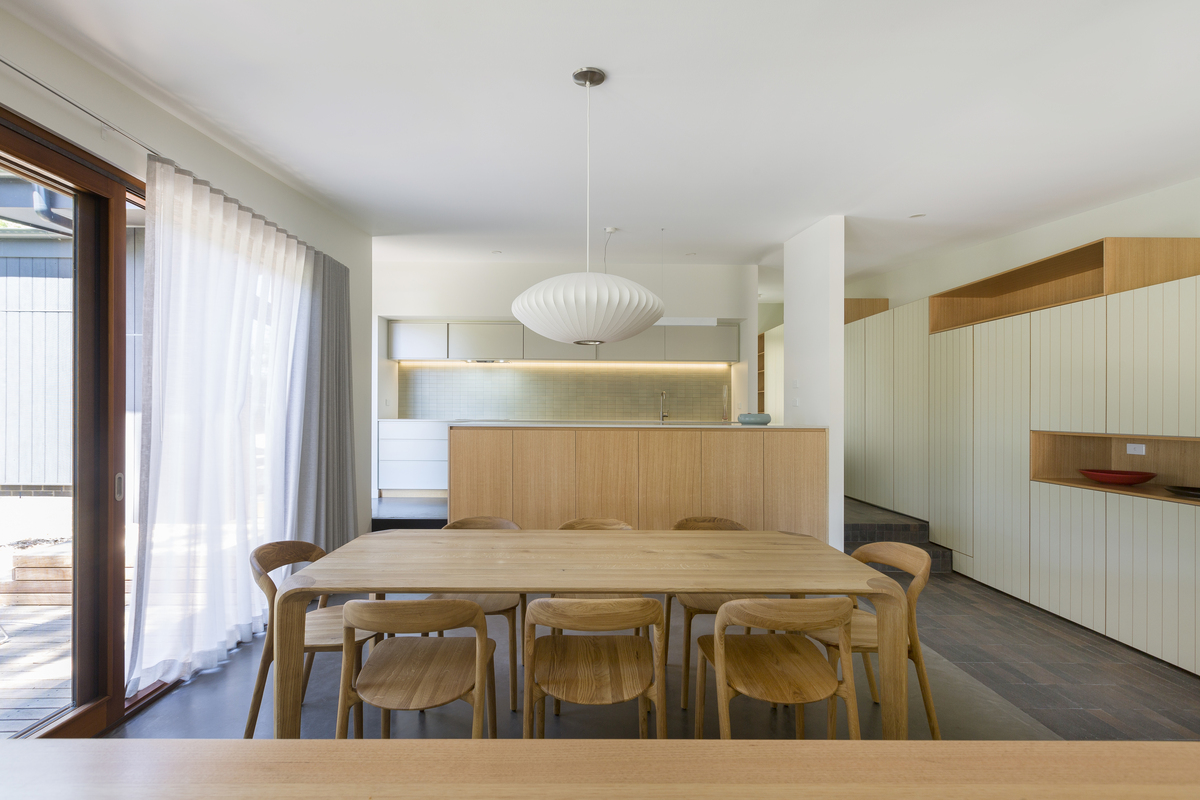 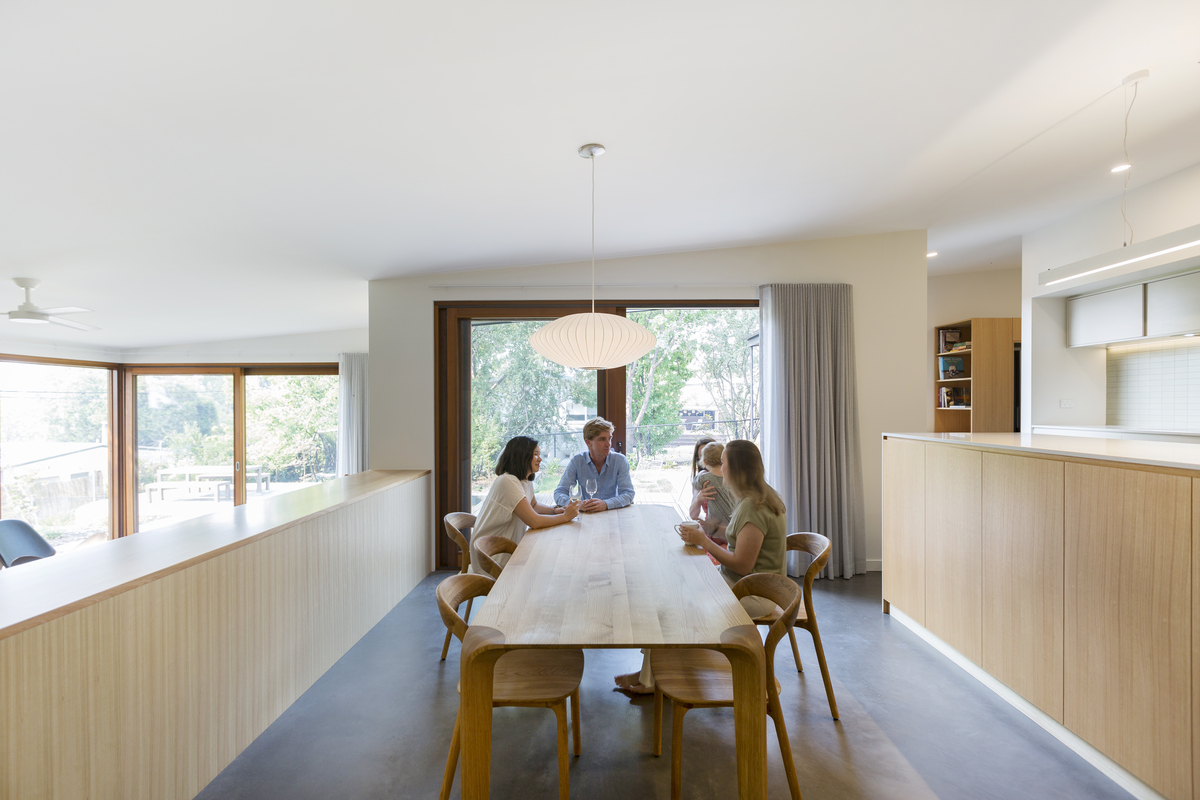 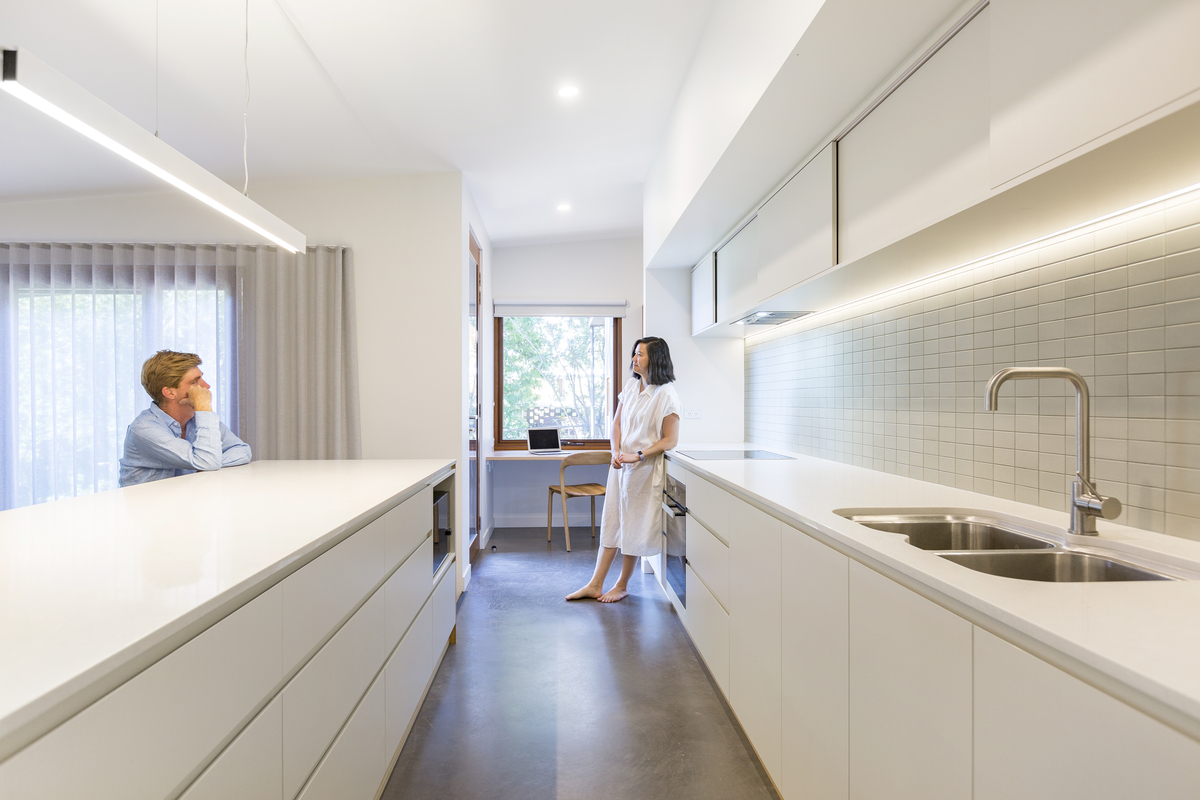 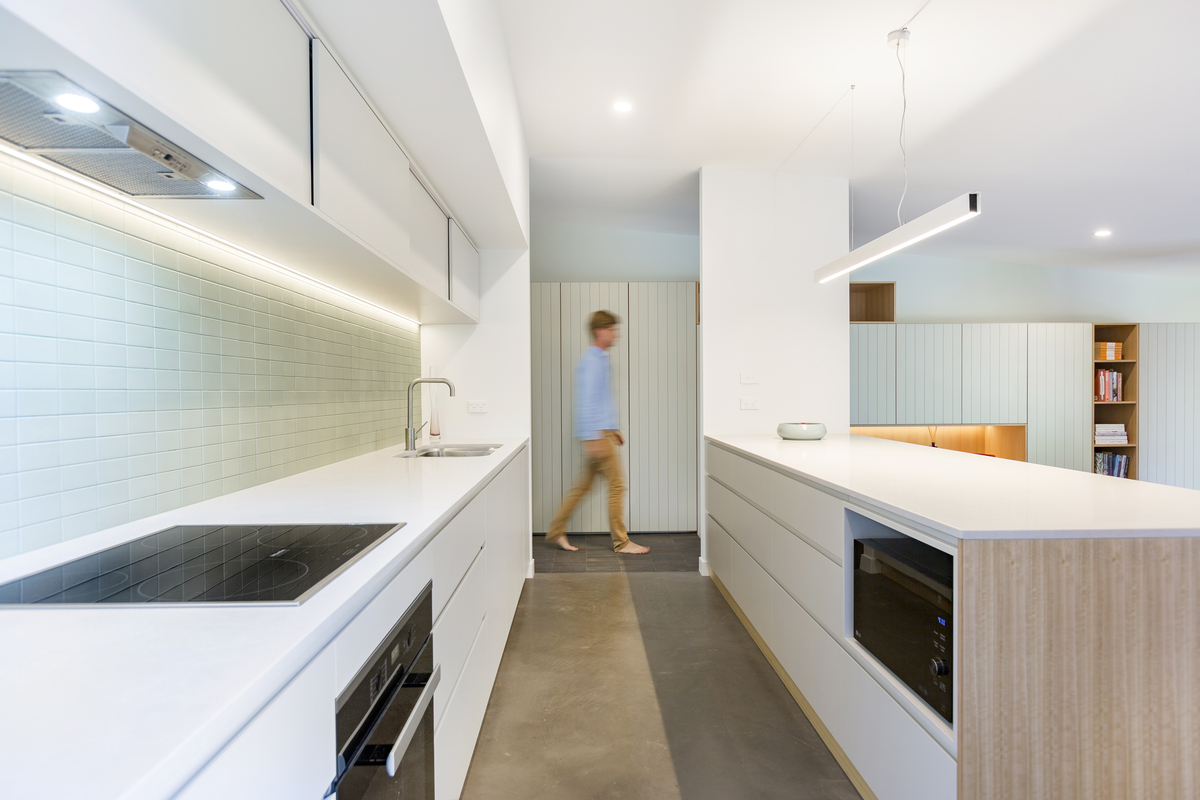 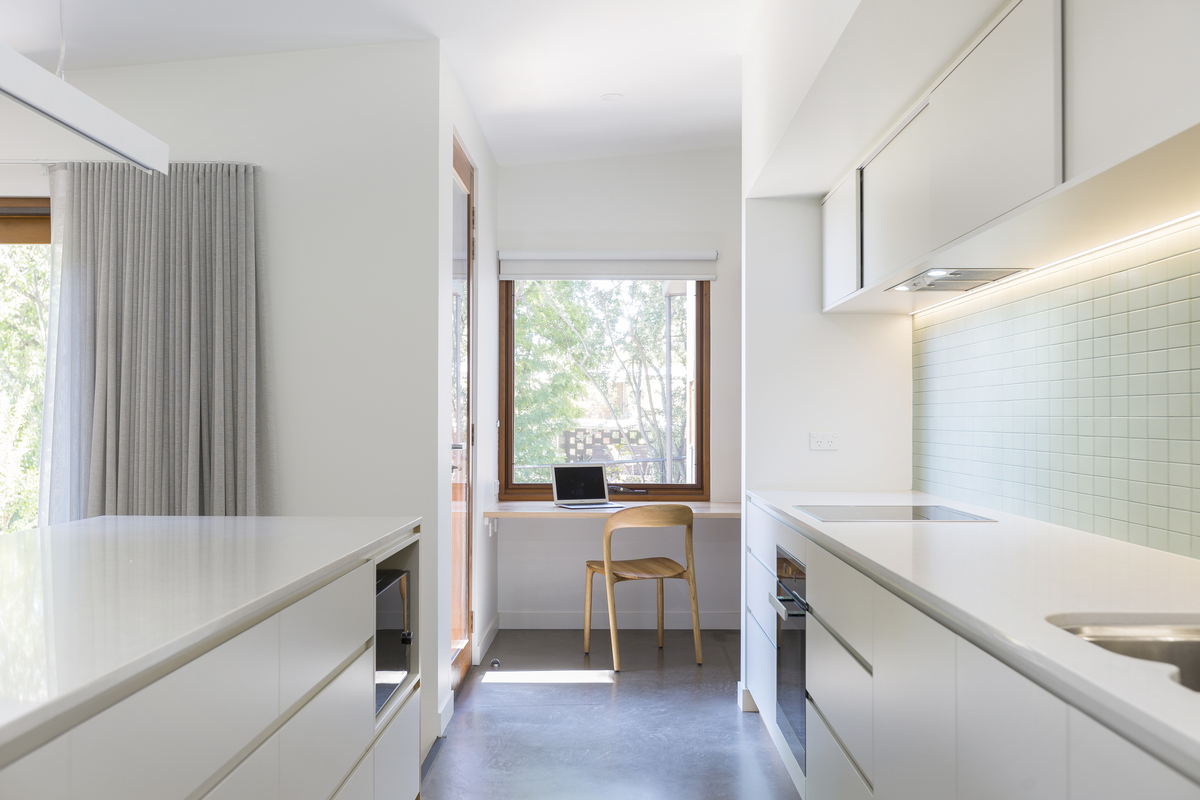 Each of the north-facing living areas is accessed off this path and joinery units create practical storage to define and separate each space. 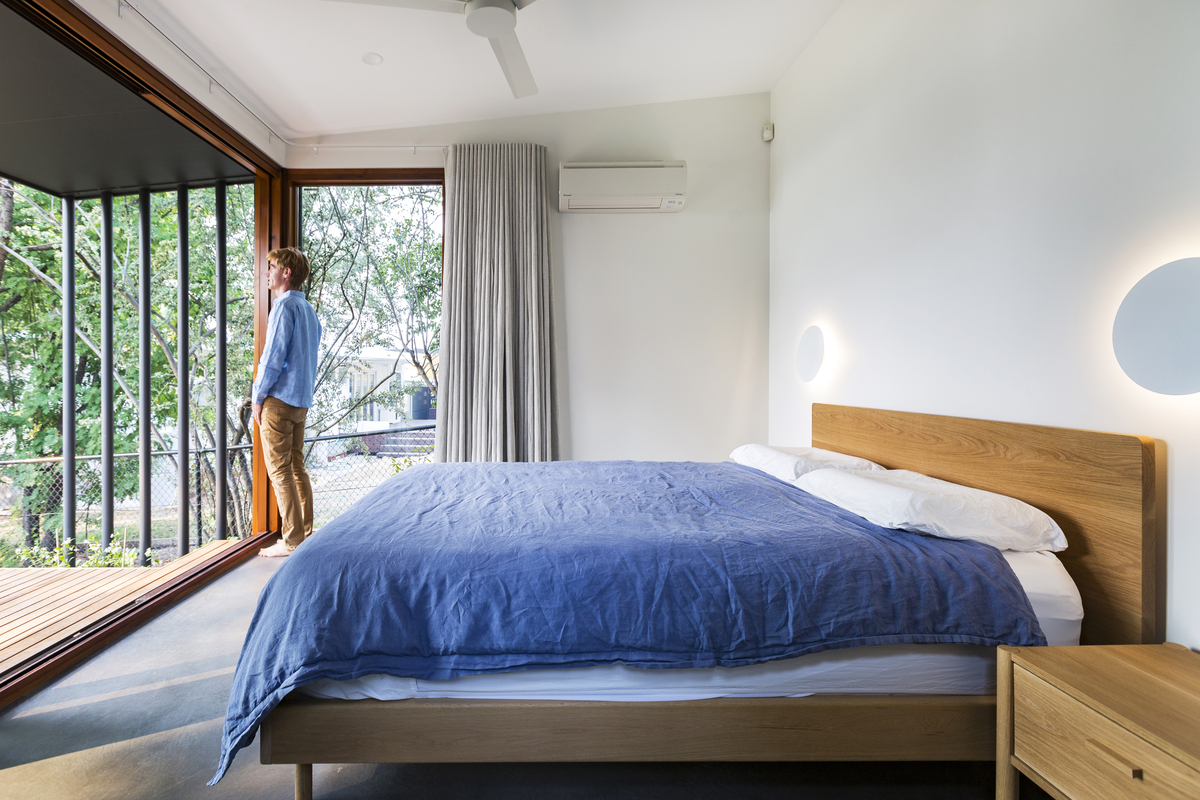 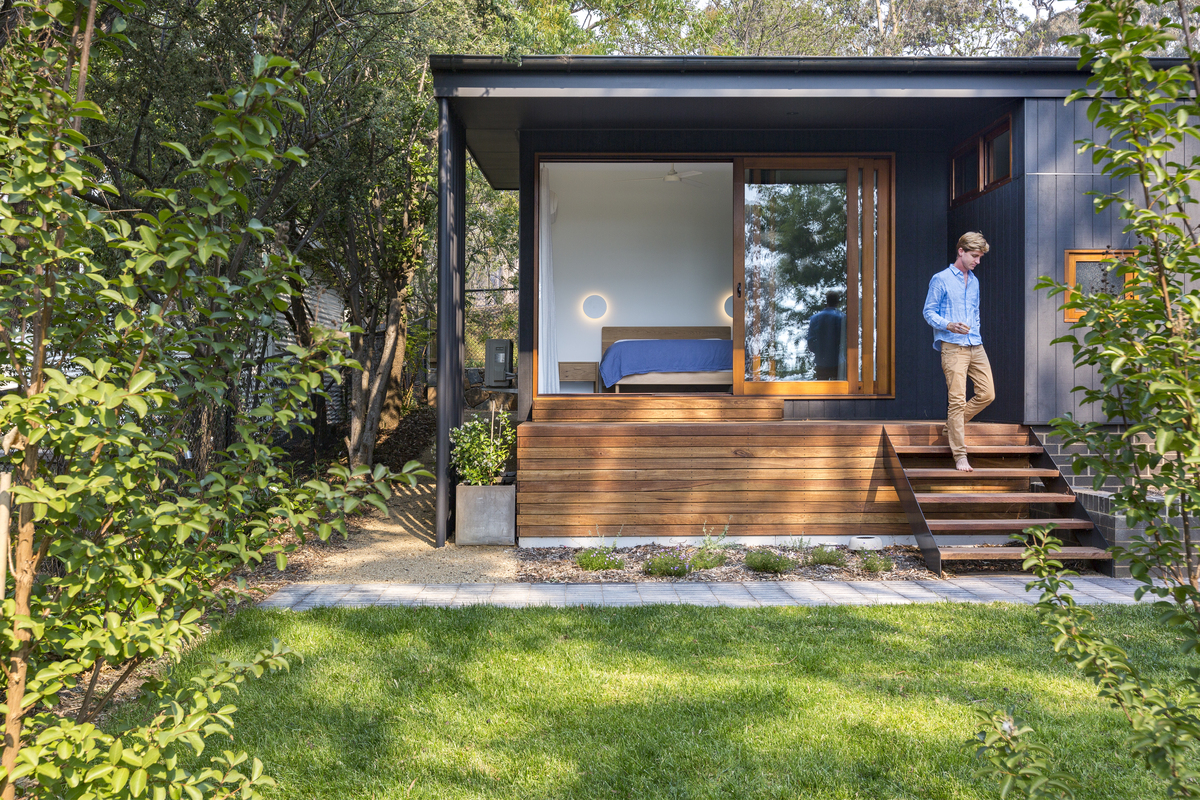 A second axis connects the bedroom wing, creating a buffer between public and private spaces in the home. 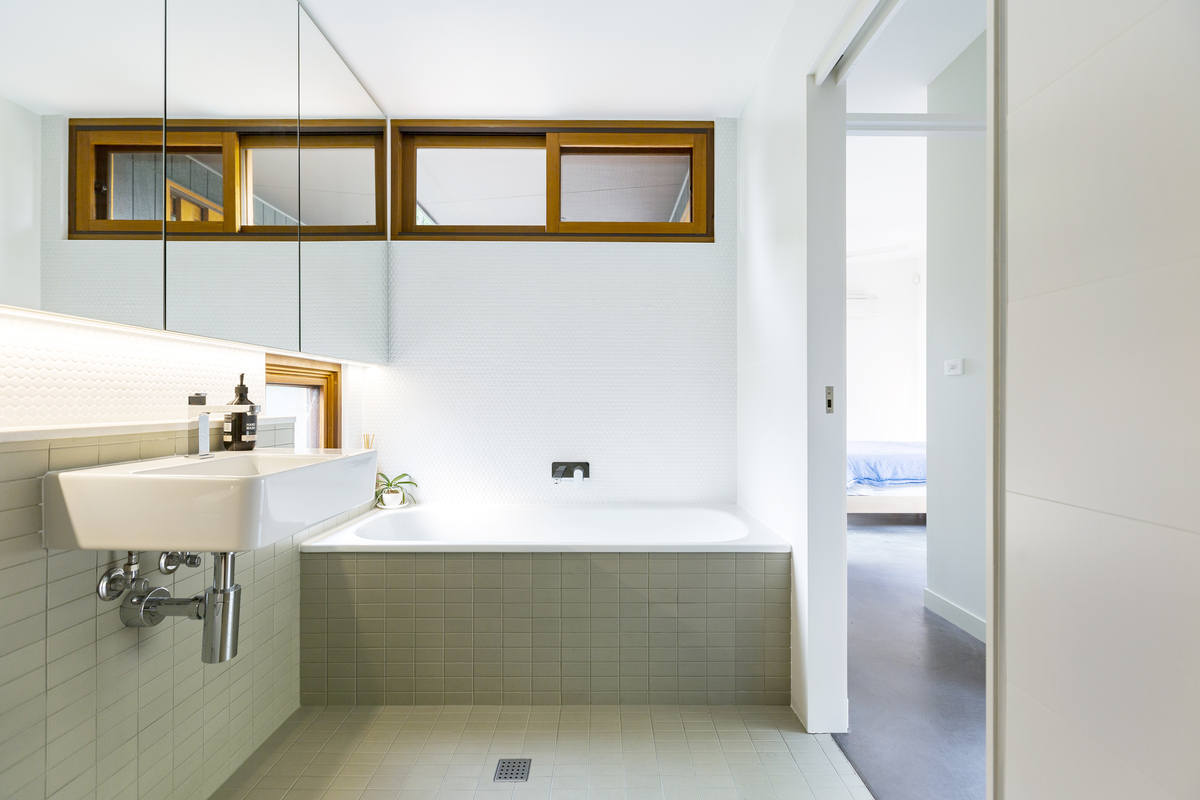 A single-pitched roof following the slope of the land shelters the entire house and the ceilings are raked to match the roof's angle, giving each room its own identity. 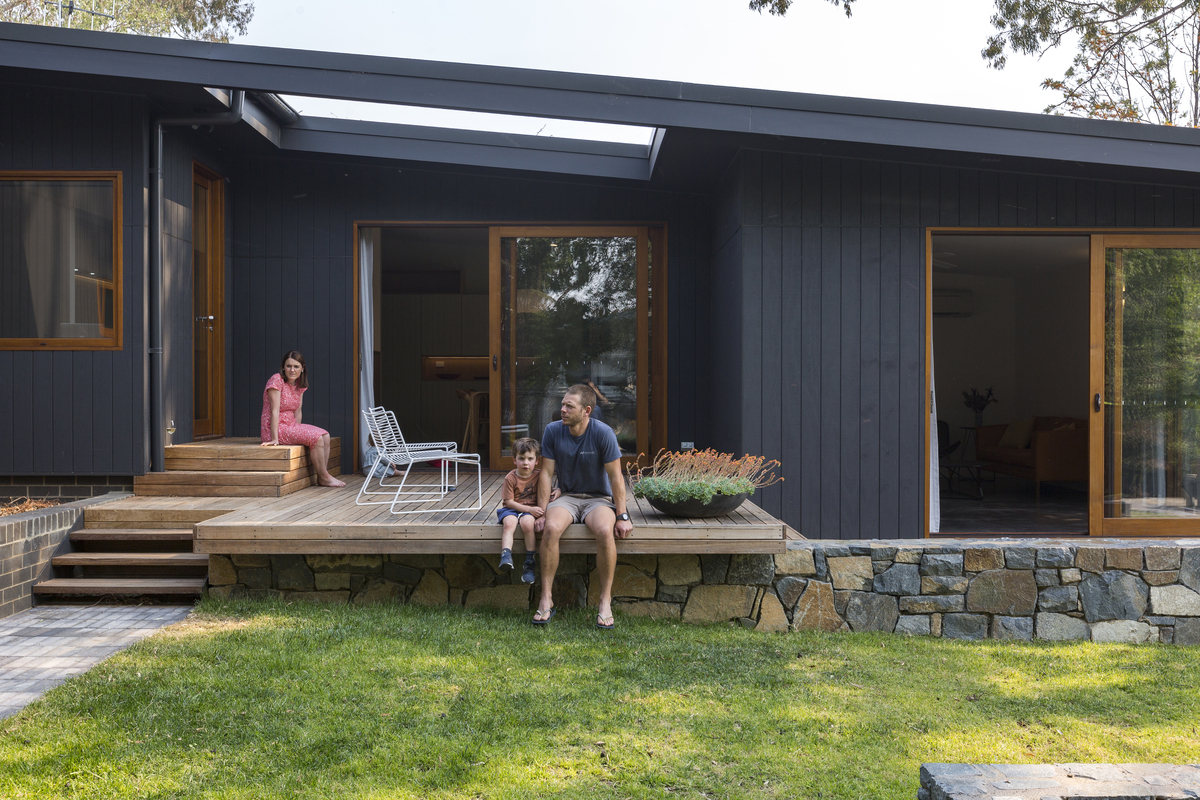 Constructed in stone, timber and charcoal cladding, the home is designed to harmonise with its location and feel grounded in the leafy surrounds. "The interiors are a combination of white, soft green, and timber veneer; a further reflection of the landscape context."

"The planning of this 8-star house integrates standard environmental principles of solar access and cross ventilation, reducing the overall reliance on mechanical systems. Whilst thermal mass floors provide heat capture for the mid-season, air-sourced heat pump hydronic in-slab heating has also been installed and runs off a solar panel system. No active cooling was required, with multiple window openings in every room maximising cross ventilation and night purging. However, energy efficient air conditioning units were installed to assist with cooling when windows cannot be opened, such as with recent hazardous smoke conditions. Effort was made to retain and protect the significant regulated eucalyptus tree, with two specialised footings and a support beam system holding up the stone wall.

"As a result, Stepping House is comfortable year-round, has low energy usage, and is built with a consideration of longevity through its underpinning construction methodology and low maintenance material selection." 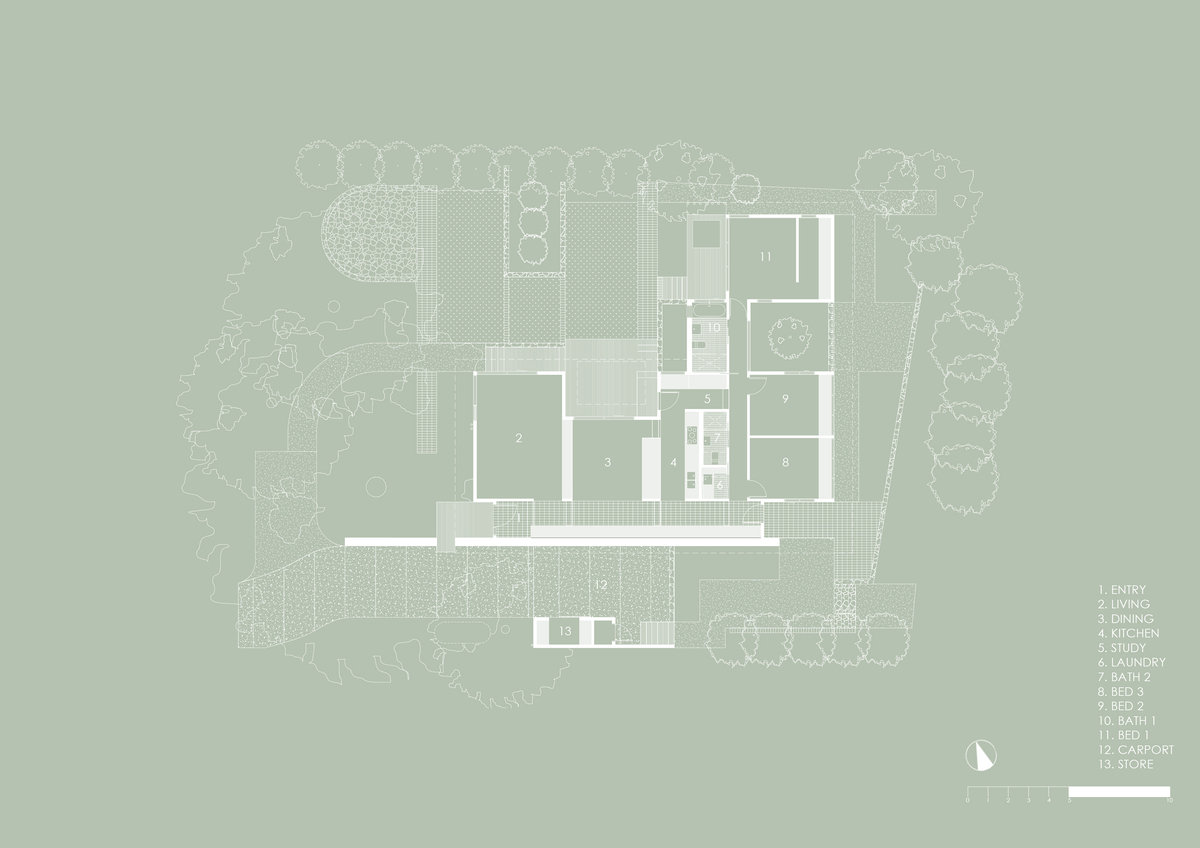 On a tricky, but naturally beautiful battle-axe site, this home celebrates its assets and minimises its drawbacks. This is one of the challenges, but great advantages of good architecture, and can help your home feel like a sanctuary. "Stepping House bucks the trend of contemporary development in the suburb by maintaining the qualities that underpinned its mid-century predecessors... More importantly, it provides its owner with a serene and private domain with sustainability and endurance at heart."

Tell us what you love about Stepping House...