This Off-grid Shipping Container Tiny House is the Perfect Retreat

Perched on the top of a rocky hill, overlooking the undulating mountains around Mansfield, two 20ft shipping containers create one tiny home big on style. 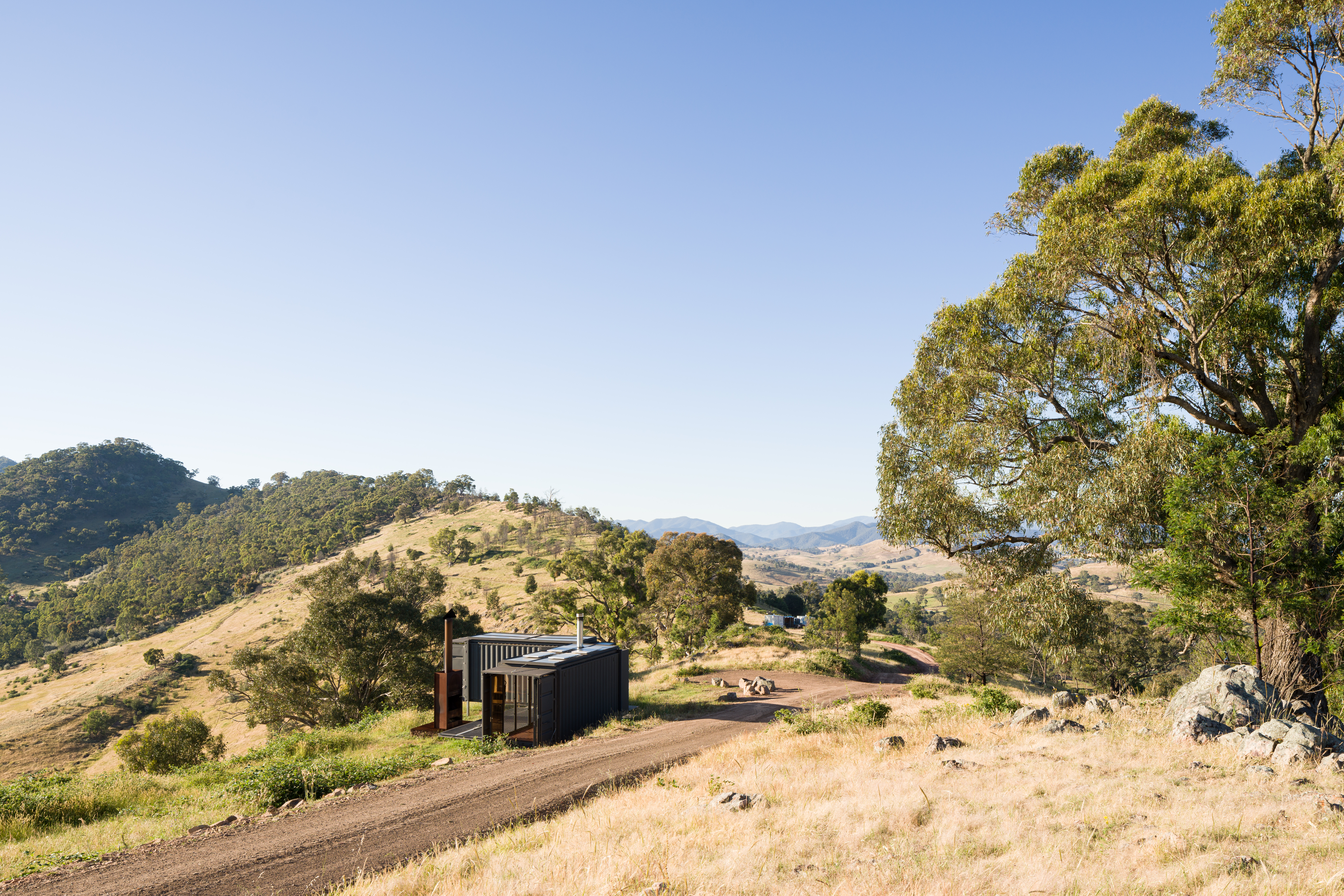 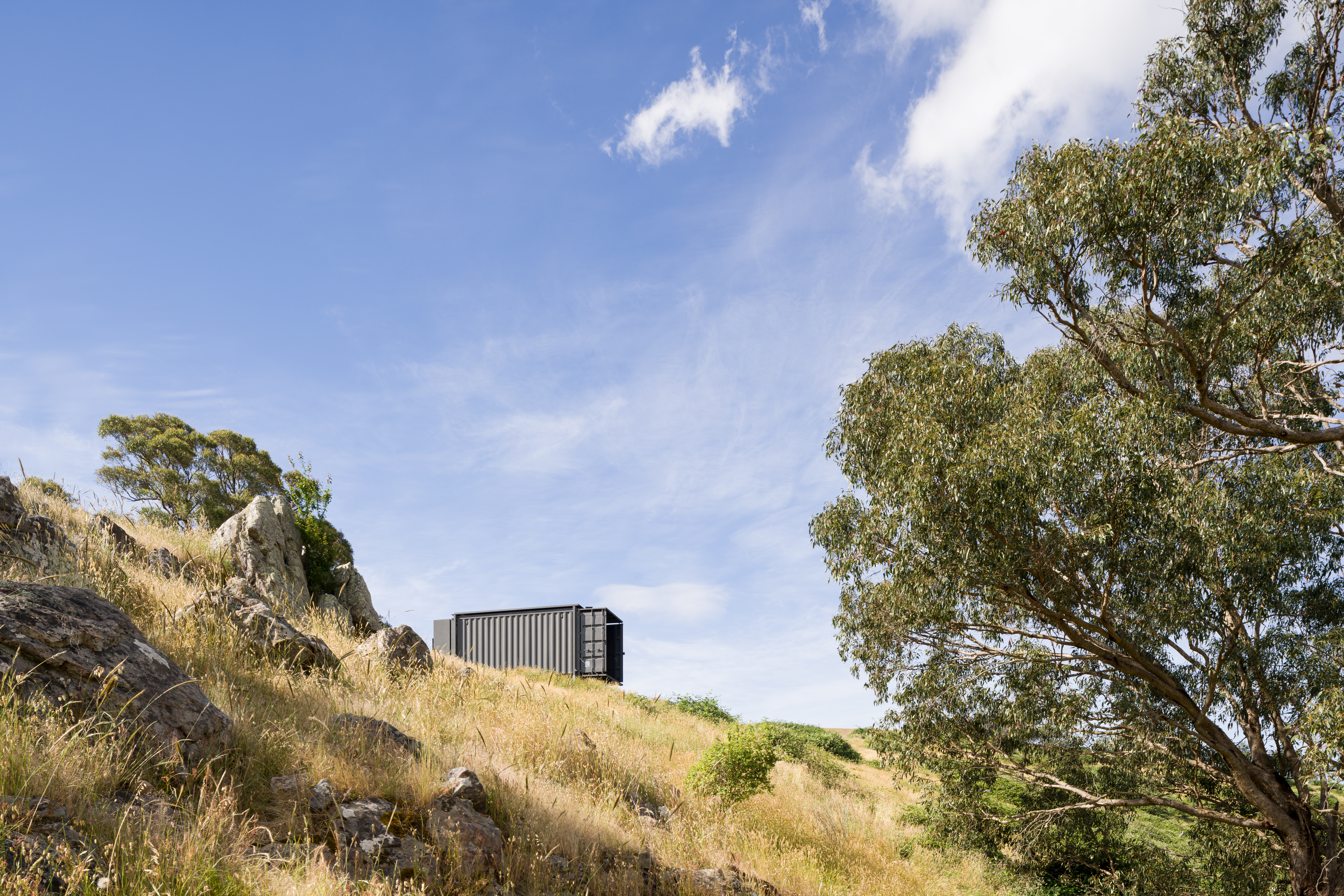 Designer and builder Robbie Walker created the shipping container tiny house on his site near Mansfield for him and his family to enjoy and also to share with others on AirBnB. Shipping containers are a common sight on farms in the area, so adding another couple to the top of the hill seemed like a logical, contextual choice. It also means there's flexibility to relocate the containers in the future if desired. 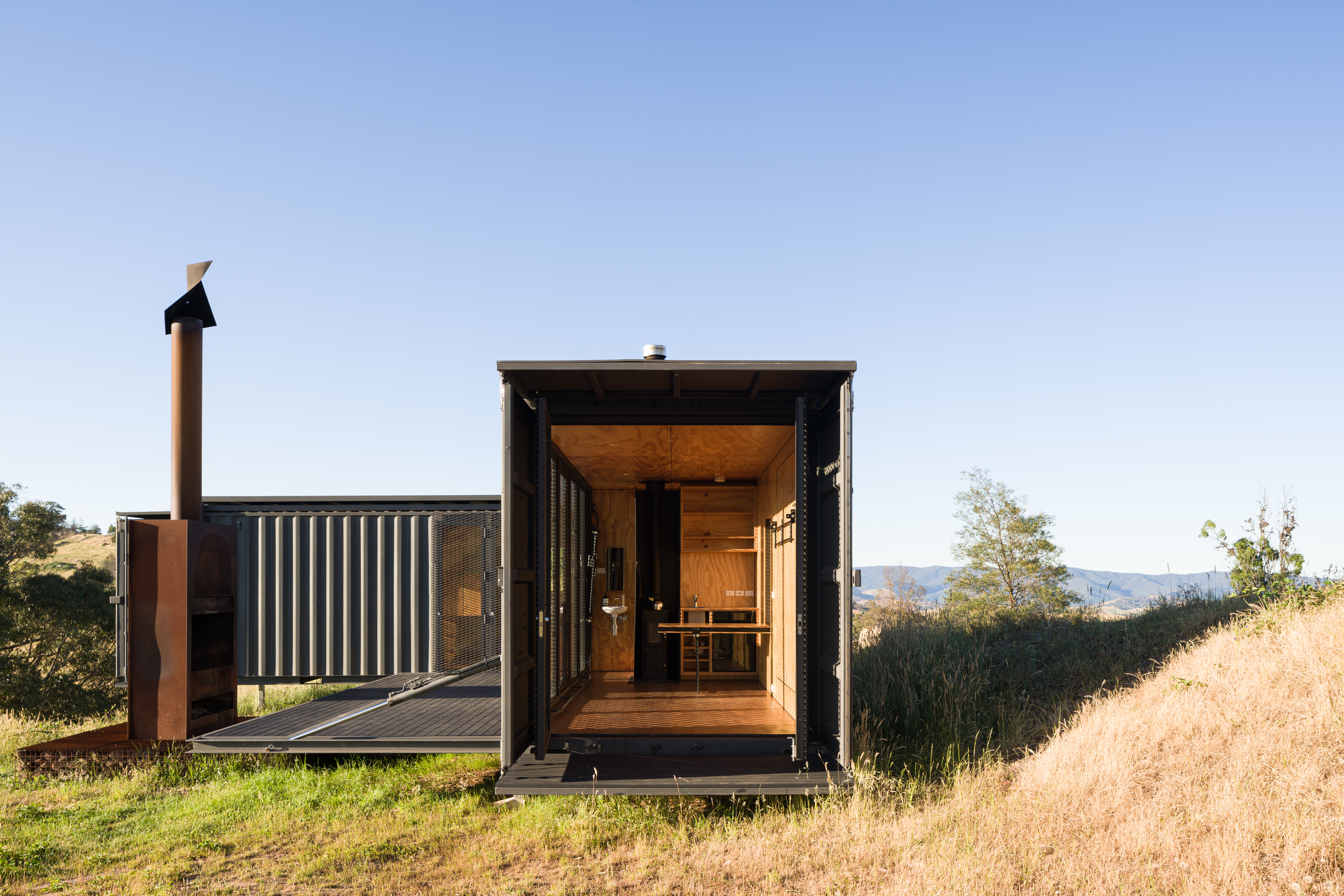 Both containers are self-contained and identical in plan. Either or both could be relocated to another site and function independently with a wet area on one end and an open-plan space with fold-down furniture taking up the remaining space. One container has been customised to act as a living zone, with a fold-down dining table, wood-burning stove and large glazed side which opens hydraulically to transform into a deck. The other acts as the sleeping zone, with a fold-down double bed and a triple bunk.

The fold-down beds cleverly use self-inflating foam mattresses which compress down to virtually nothing, while fluffing up to a comfortable thickness when the Murphy-style beds are opened. 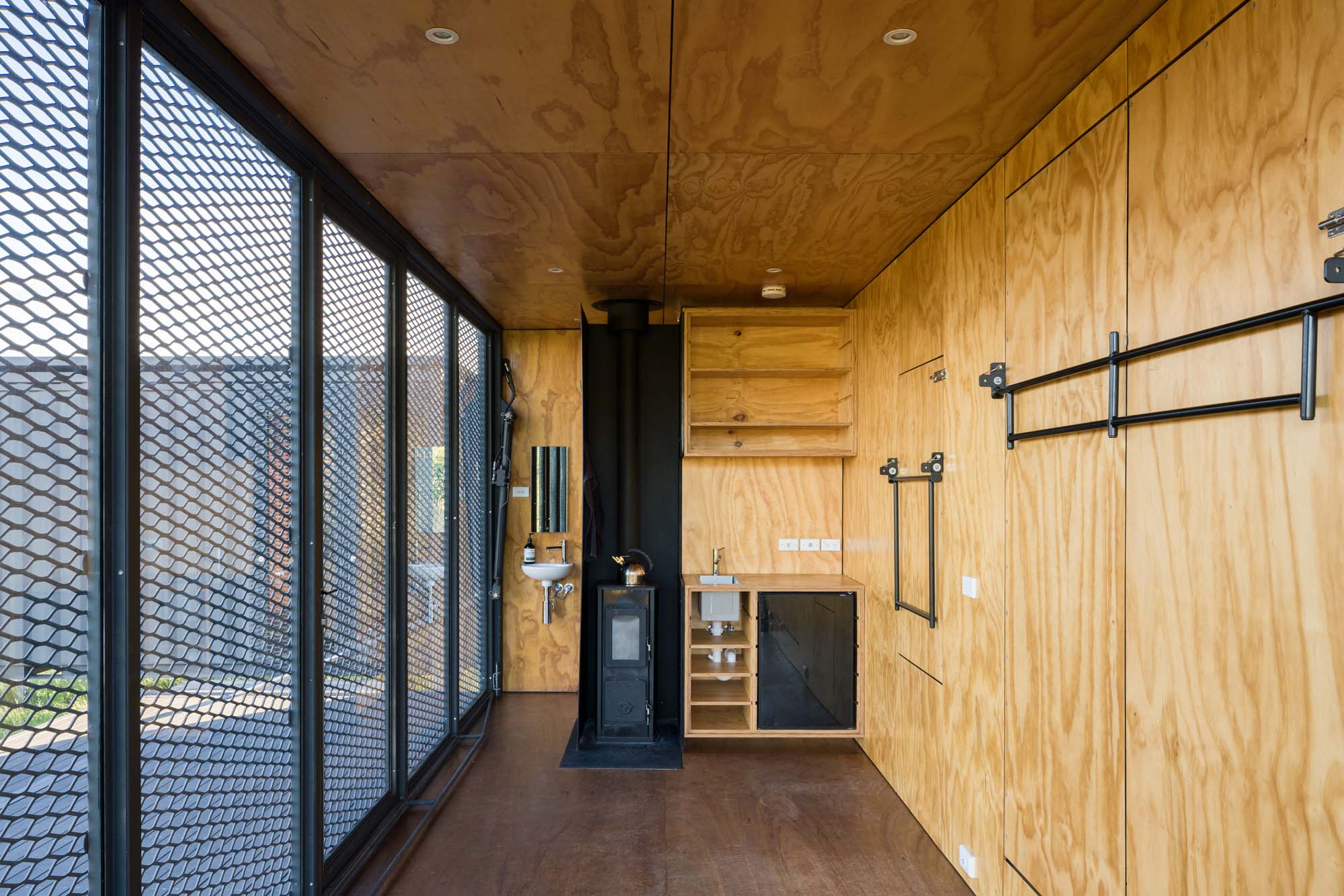 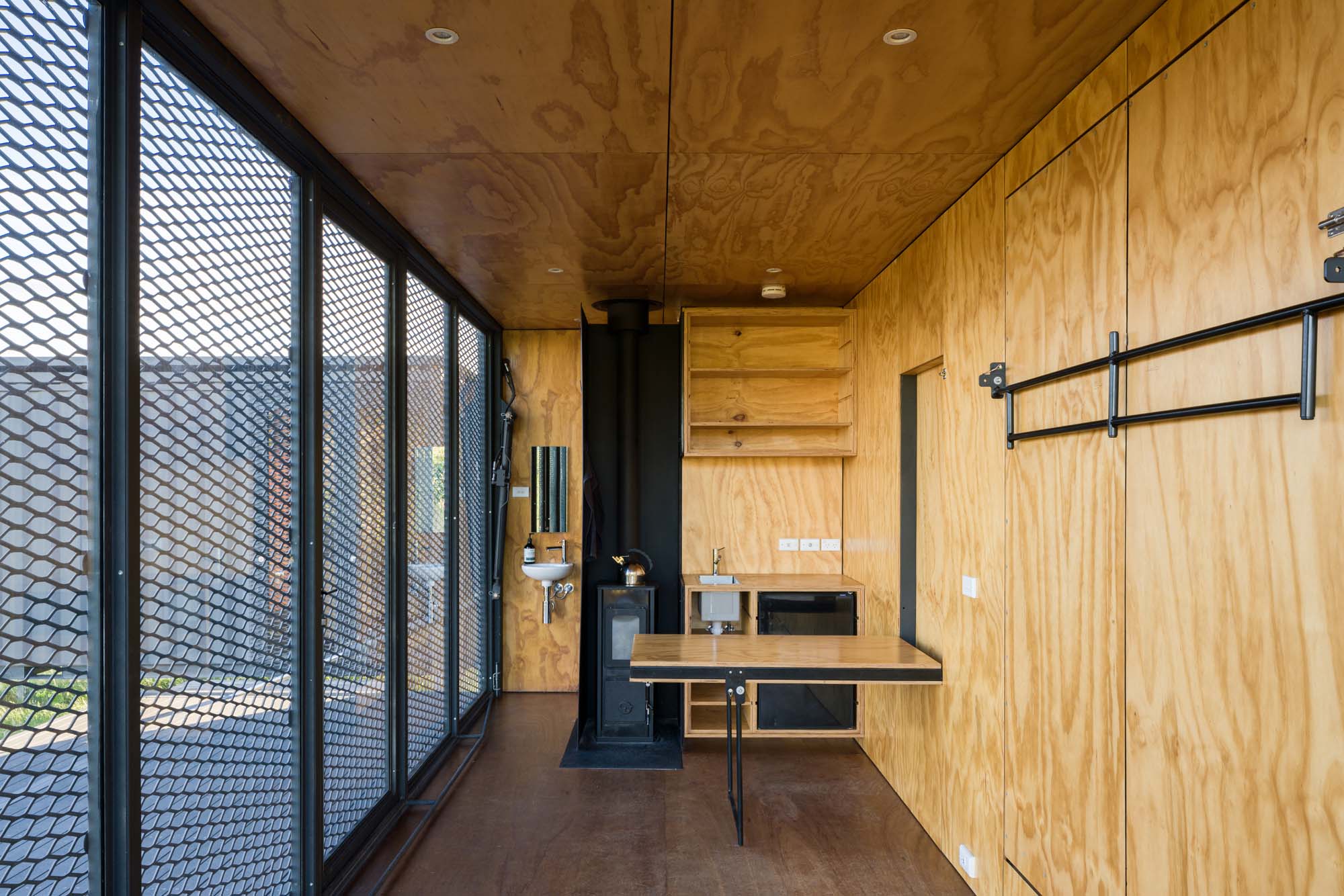 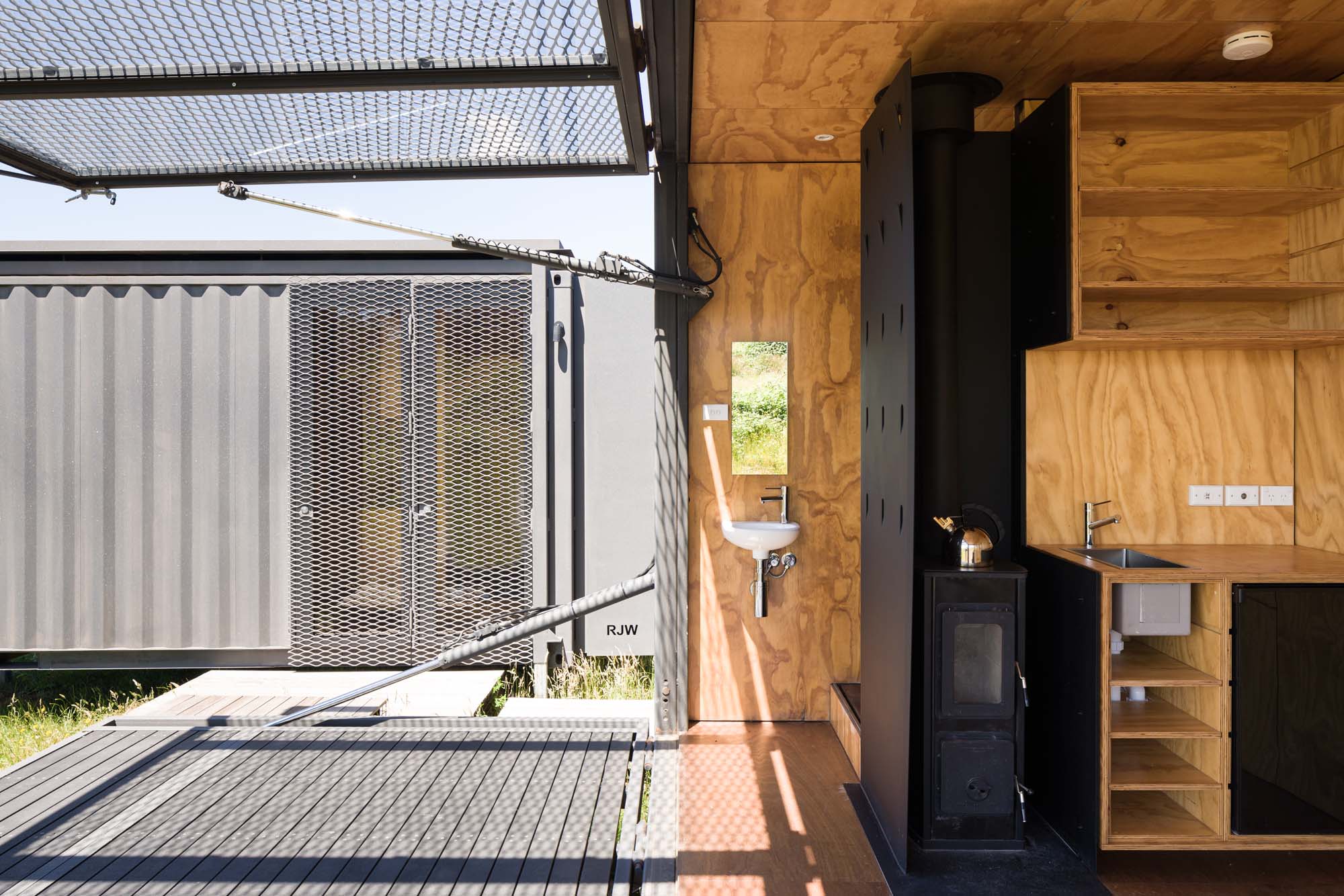 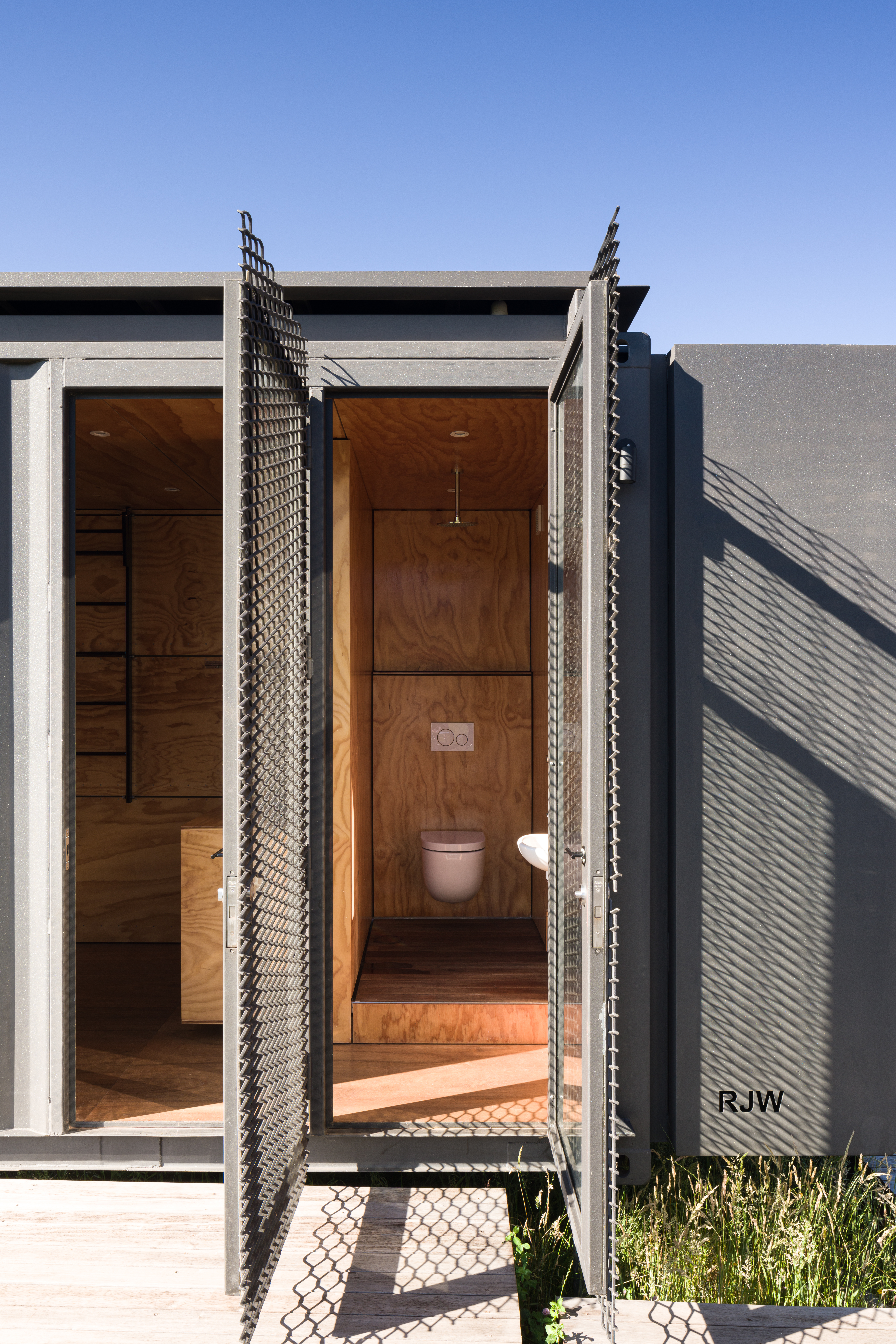 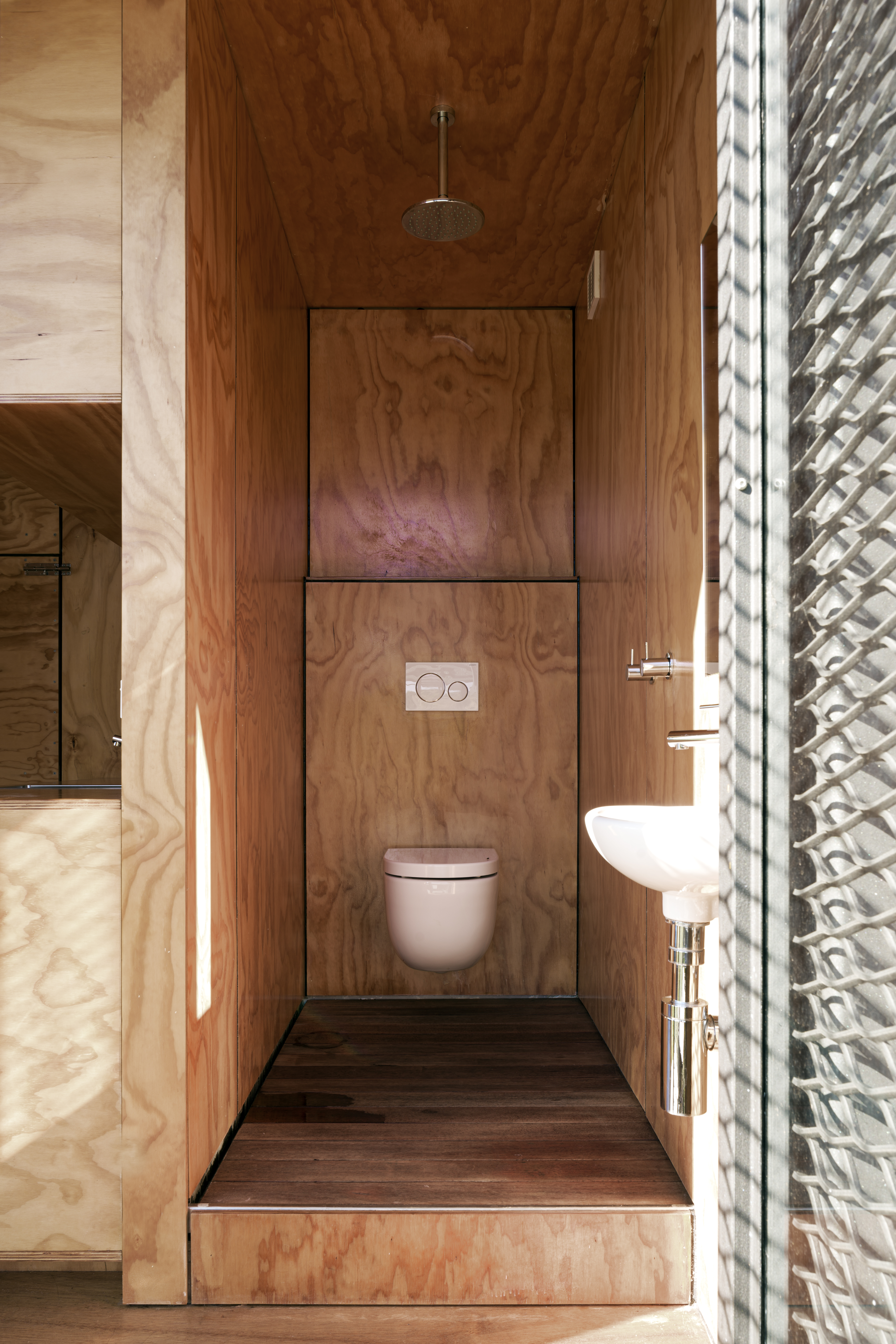 The look and feel of the containers retain an industrial edge. A heavy-duty industrial paint is used externally to tie all the elements together. Inside, plywood is used for floor, wall and ceiling surfaces, a nod to the plywood floors found in standard shipping containers. Plywood even continues into the bathrooms where Robbie has used an epoxy resin usually used to seal timber boats. If it's good enough for a boat, it'll protect the bathroom. 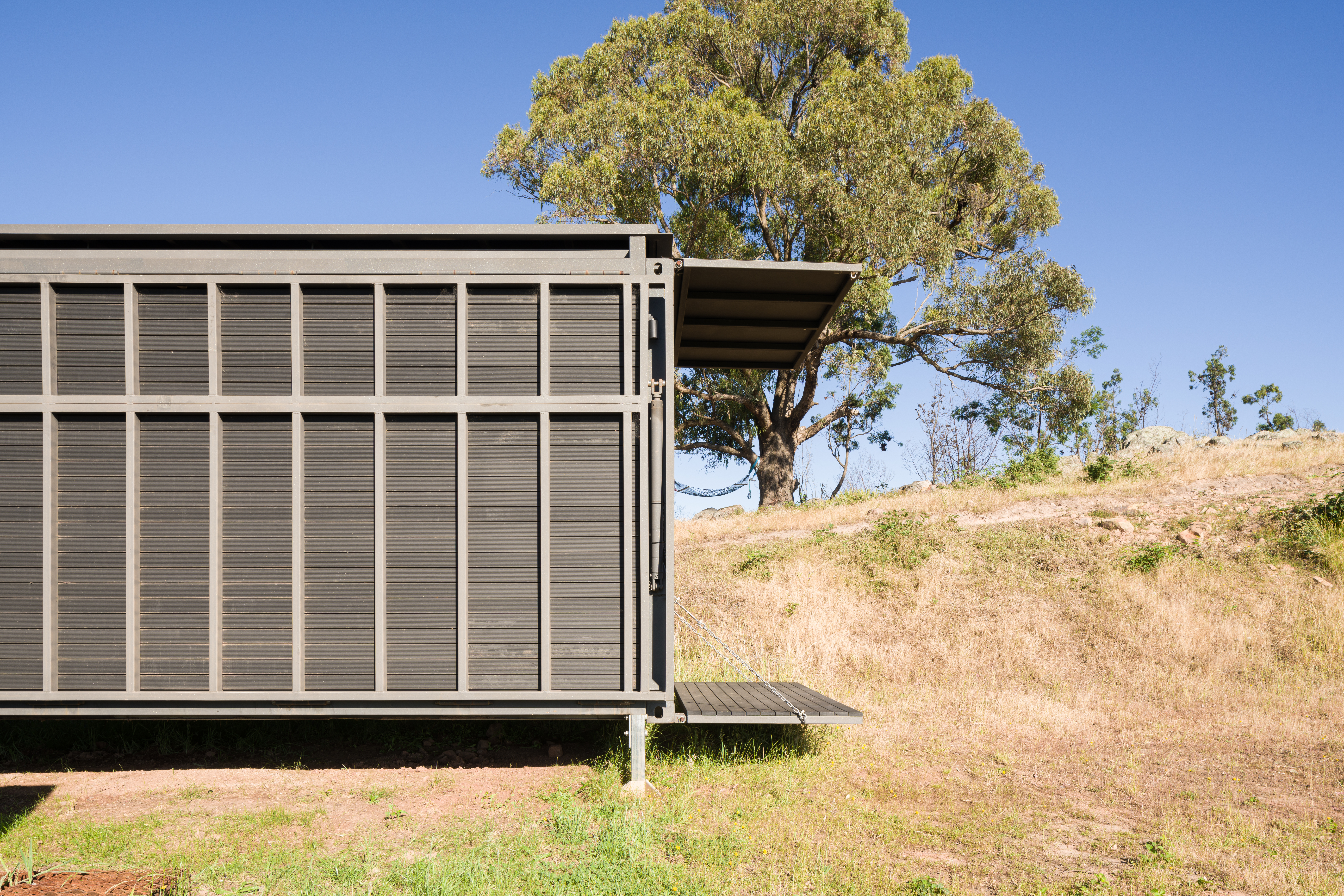 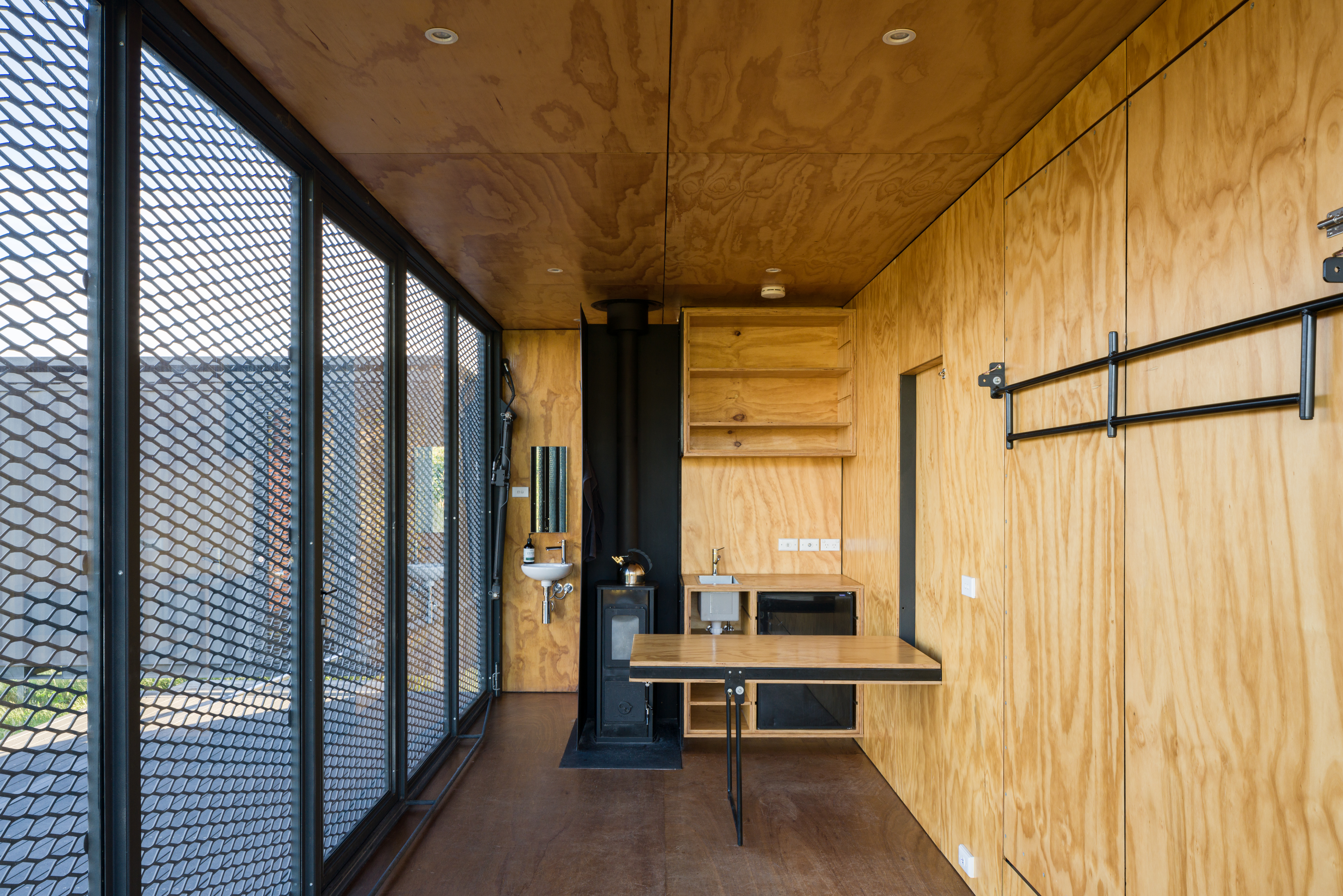 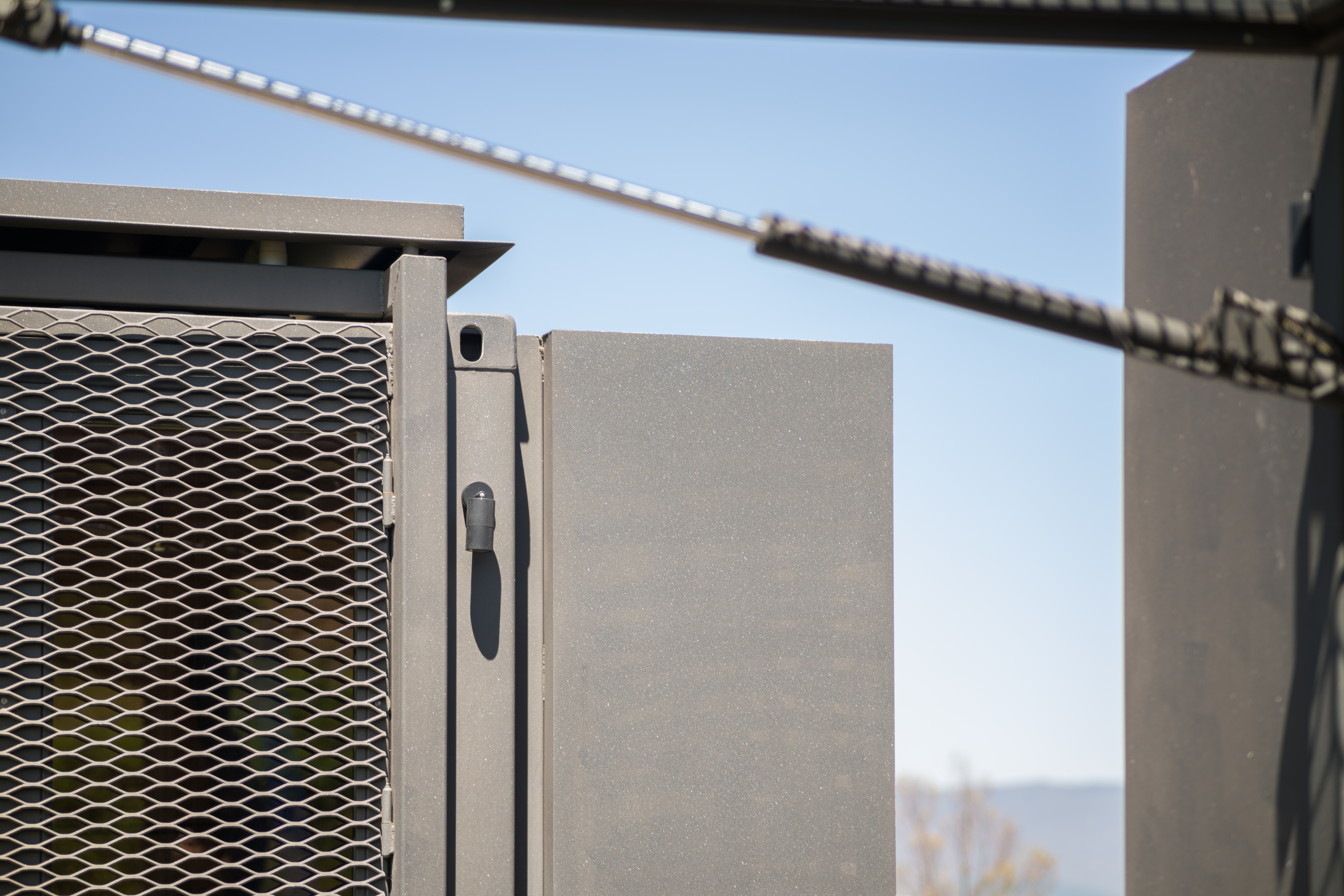 An elaborate hydraulic system was created with the help of Robbie's uncle to open the entire side of the living container. Part of the wall drops down to become a deck, while a second layer opens to become an awning over the deck. When closed, steel grating, usually found in industrial settings where it's used for things like balustrades and steps, is the perfect sunshade, blocking the heat of the afternoon sun, while letting in light in the morning and retaining views. 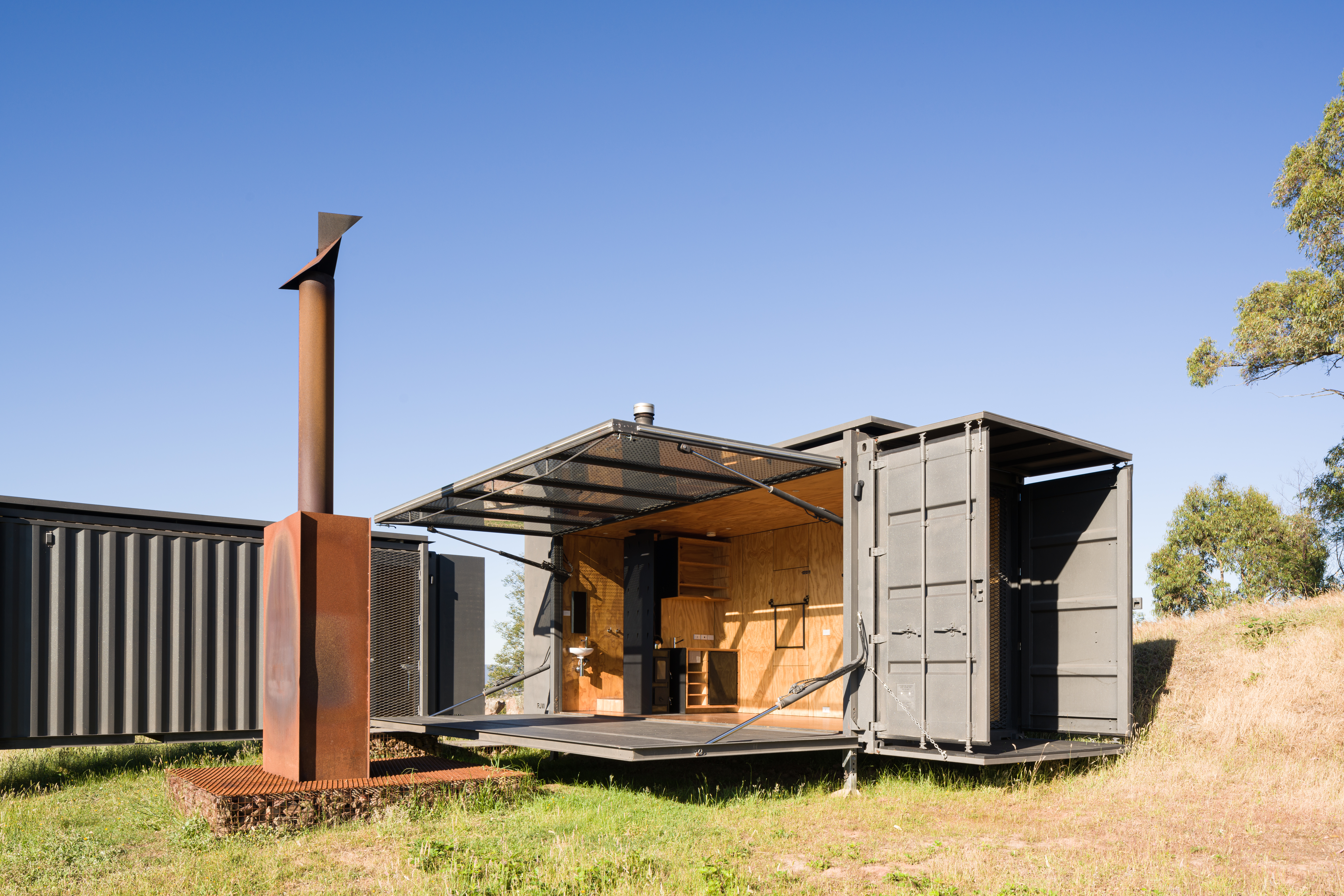 Gabion baskets filled with local rock are used to create platforms between the containers and an outdoor fireplace, helping to tie the containers into the local landscape.

Due to the nature of the site, the containers are completely off-grid. Solar power is collected from panels on the roof and feed a battery stored in a box at the end of the containers. The containers run on 12-volt power, like a caravan. All services are contained within these boxes so, again, the containers can be transported if required. Two 1000L bladder water tanks are concealed under a parasol roof, where rainwater is directed to fill the tanks for use in the containers. 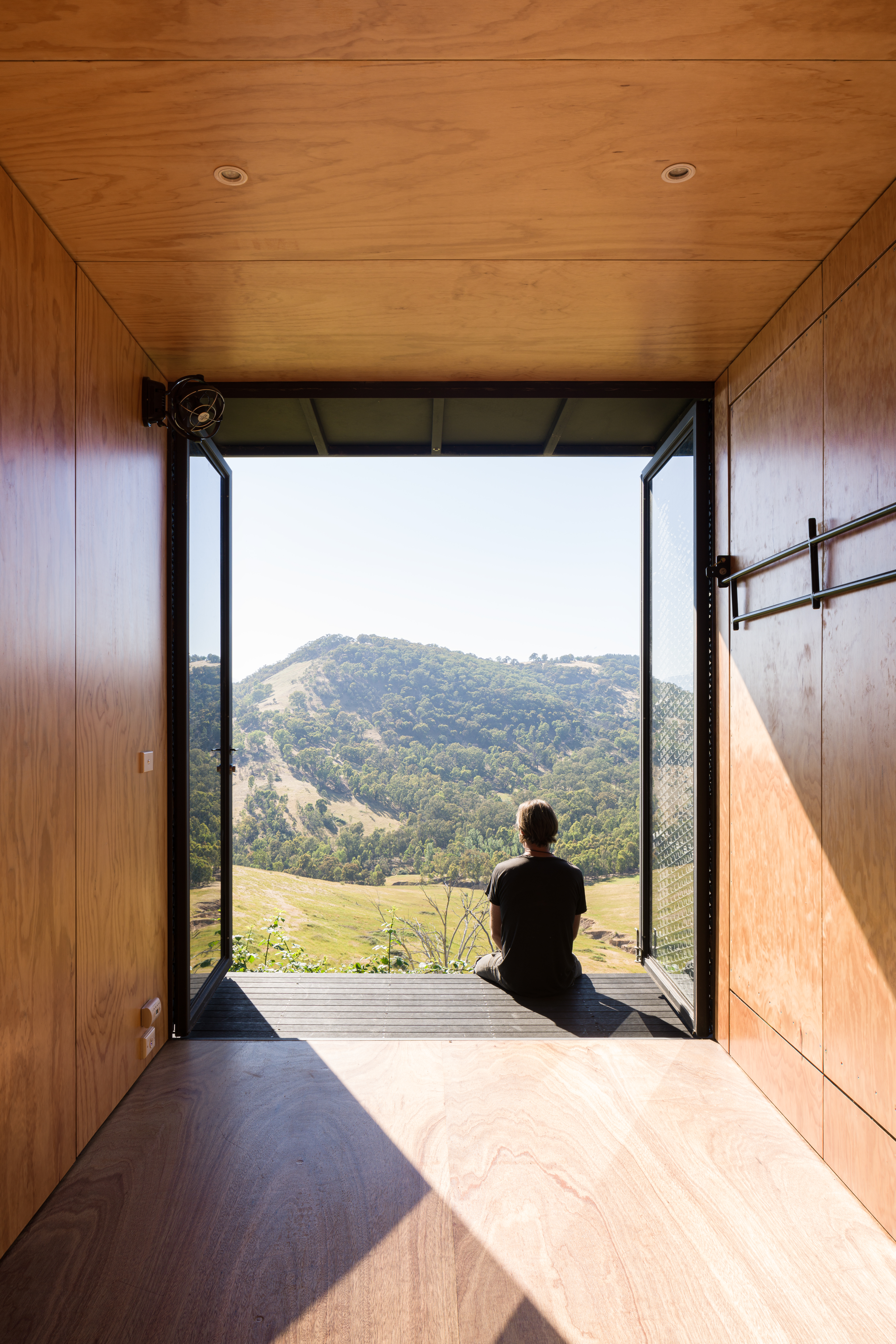 This part of the country can be wild, there's extreme heat in the summer and extreme cold in the winter. The containers are insulated and protected from the elements but, equally, they need to be operated to stay comfortable. It's similar to the way a sailor most operate a yacht; you need to open a window to catch a breeze, close down at the right time to avoid the bugs, but that's part of the fun and a process that brings you closer to the elements and nature in this beautiful part of the world. 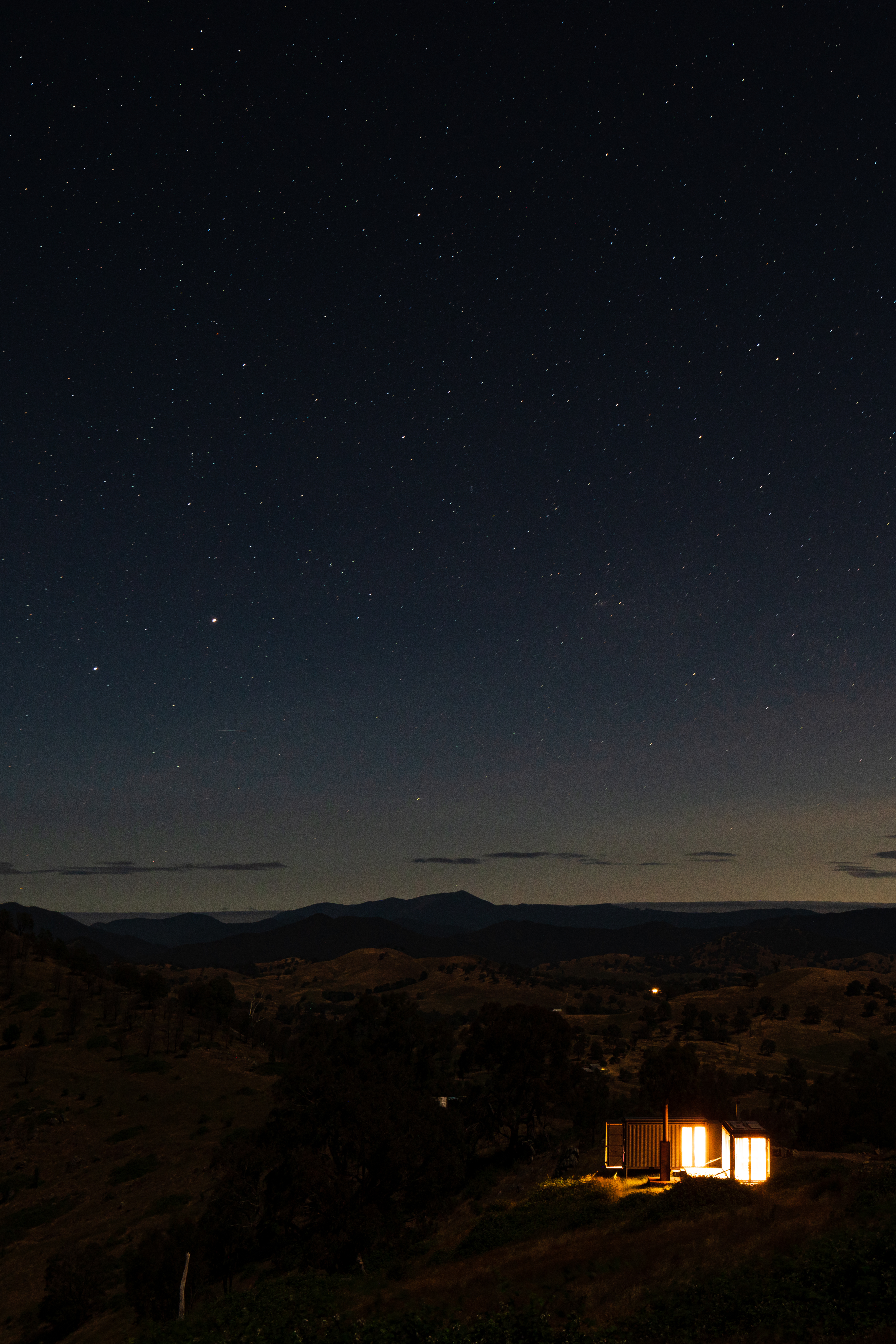