Befitting a regional sculptor based in Yackandandah, Sawmill House is a hand crafted upgrade from his existing rather rustic bohemian abode. 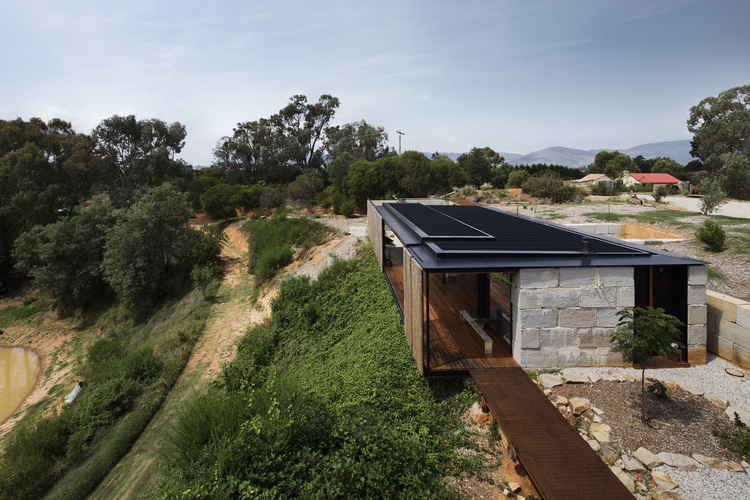 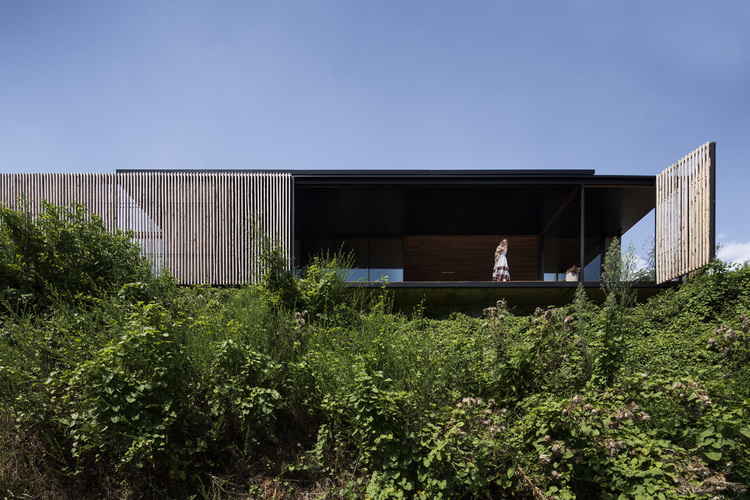 Working closely with the client, a family member of Archier's Chris Gilbert, the design for Sawmill House developed as a conversation rather than a regimented document. Comprised of 270 one ton concrete blocks, Sawmill House explores the possibility of positively leveraging the thousands of tons of concrete that goes to waste each year. 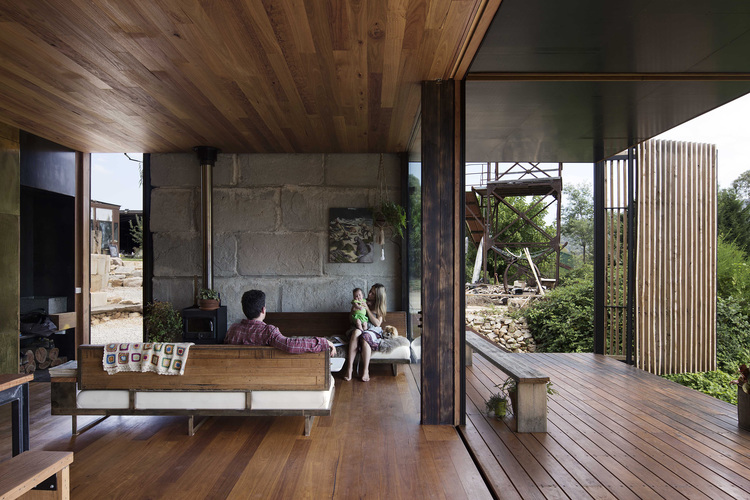 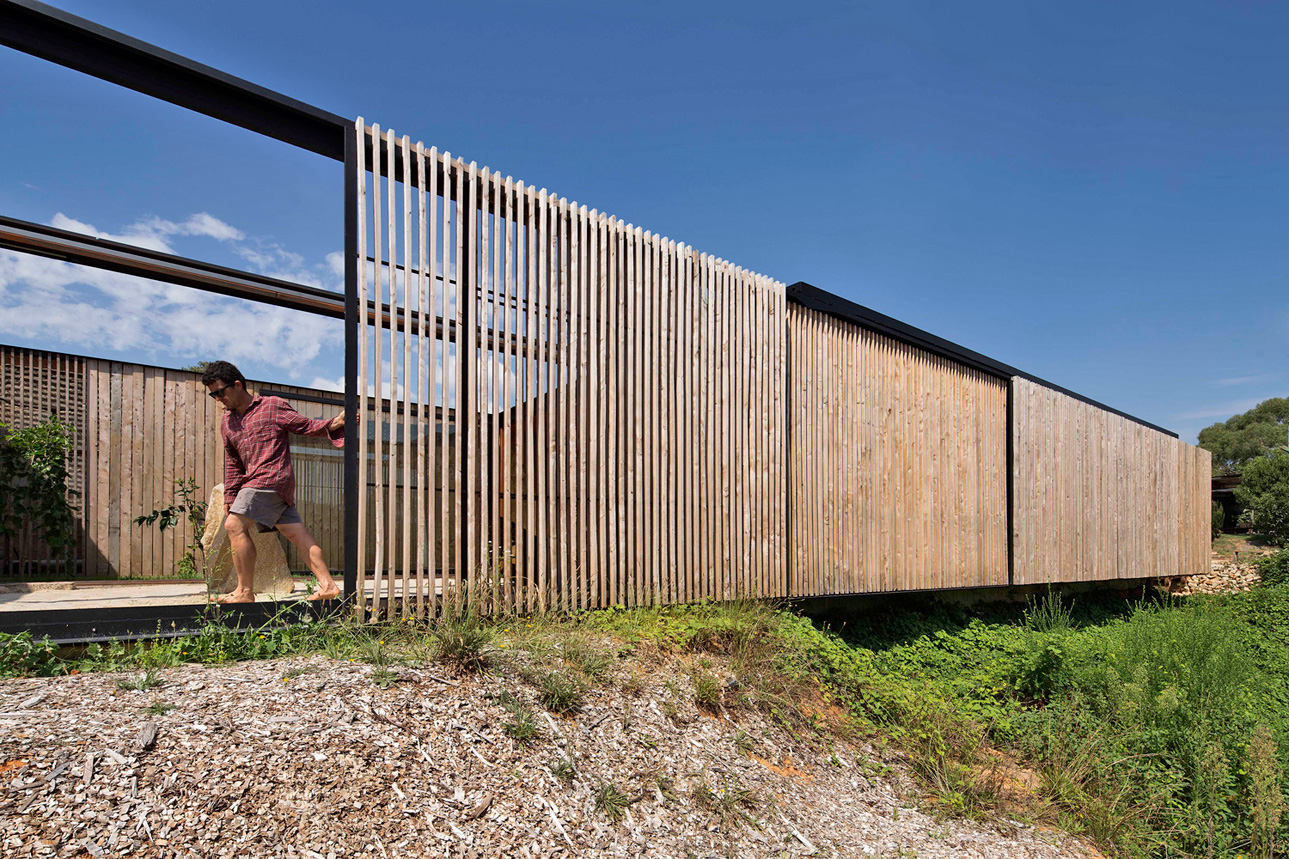 "Leveraging our client’s skill set was a priority. We facilitated this with a simple documentation set a year prior to the start of construction, then slowly developed the design whilst physically working with the client on-site." — Archier 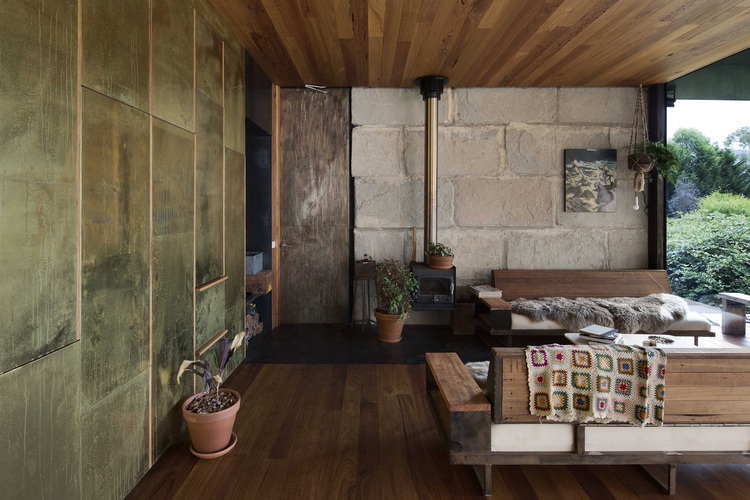 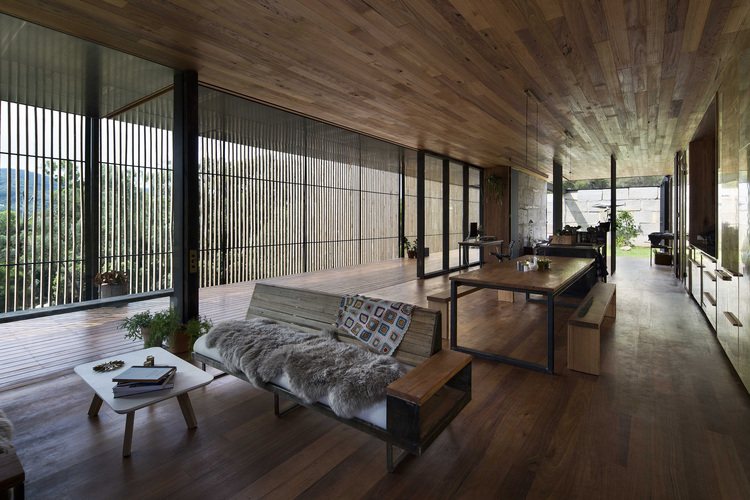 This design/build approach allowed the client and architect to move away from conventional solutions and investigate highly bespoke yet cost effective alternatives. Large sections of the roof and facade could be mechanised, entire walls of glass could pivot, courtyards could be added, custom furniture, joinery and hardware could be designed and manufactured on-site with immediate feedback. 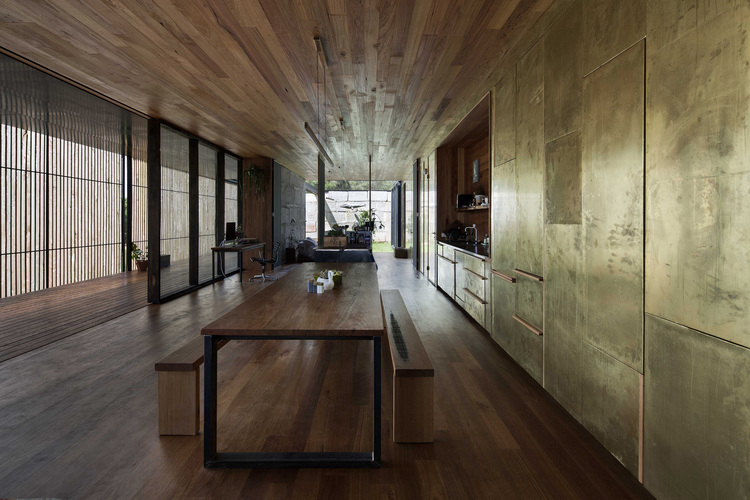 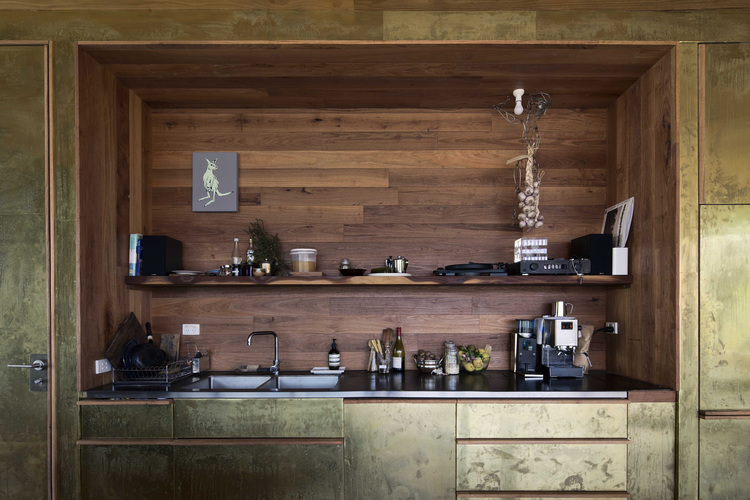 "The Sawmill House hosts our young family of three, who can now live comfortably and safely within the industrial zone." — Benjamin Gilbert 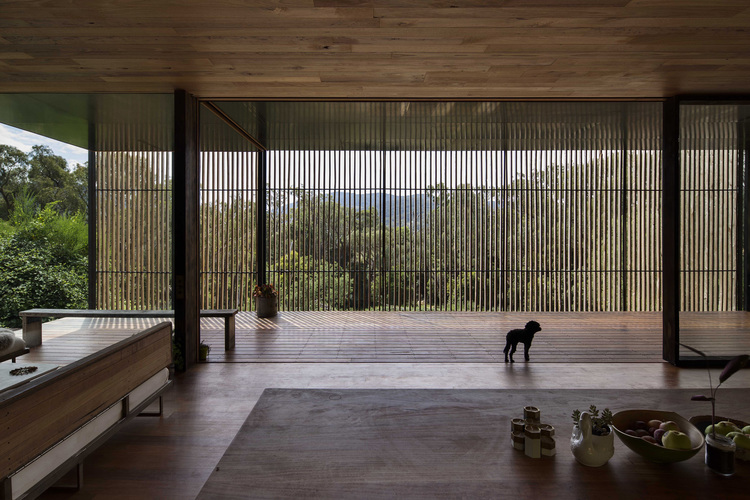 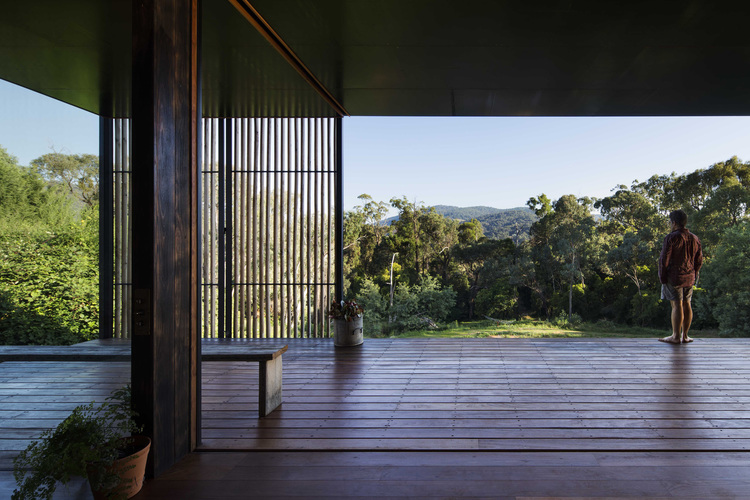 "A large operable veranda, screens and doors transform the space to suit various climatic and social conditions, which is crucial to our family who must operate in a diverse and sometimes extreme climate, and direct our home through a spectrum of private retreat to communal hub. Importantly, the civic nature of the design allows the building to function as a design office with a fantastic aspect." 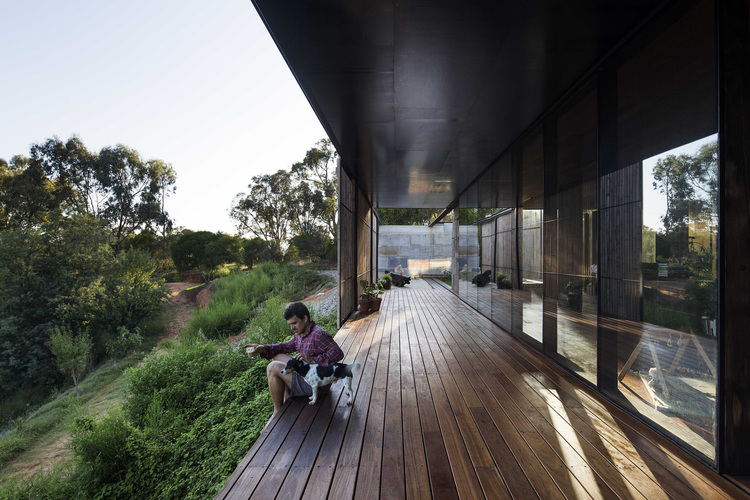 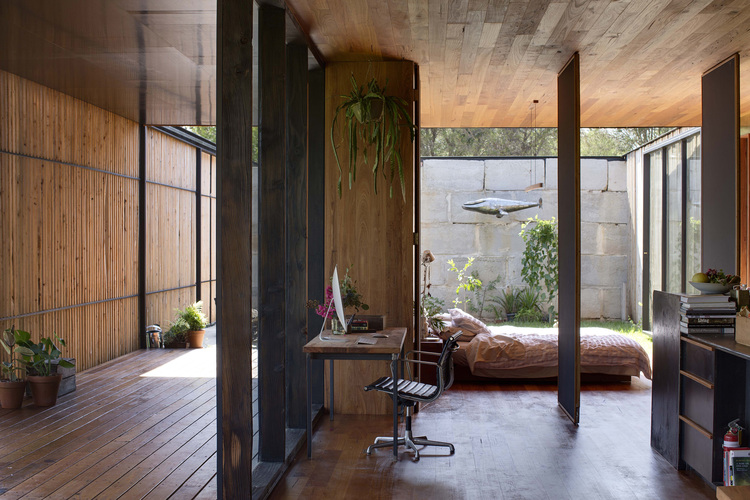 Grounded to the Site

Each of the one-tonne concrete blocks that form the perimeter of the dwelling’s walls has a story - a bridge, a footpath, a home; and create a patchwork of colour and texture across the facades. This texture grounds the building in the site, as the layers of colour mimic the sedimentary layers of earth still exposed from the site’s former life as a gold mine before becoming the local sawmill. The untreated rough sawn macrocarpa screens reference the site’s recent history and over time as they pale to grey will settle the building into its perch on the quarry’s edge. 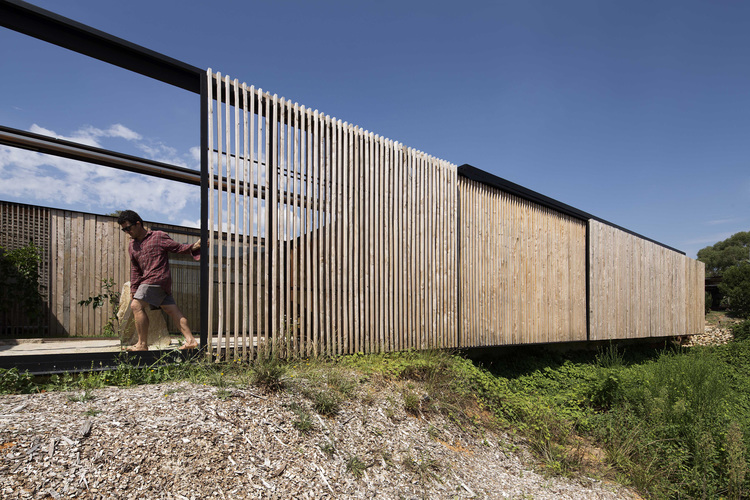 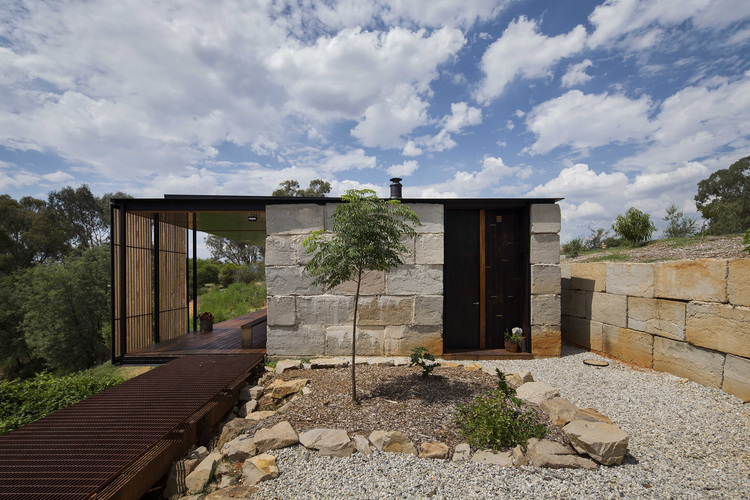 The house has a highly operable envelope that takes advantage of the local breeze that travels up the valley towards the house, passively cooling in the summer months with crossflow ventilation. In the cooler months sun penetration is maximised by rolling back a 14 metre section of openable roof over the deck, allowing the sun to passively heat the dwelling for most of the year. 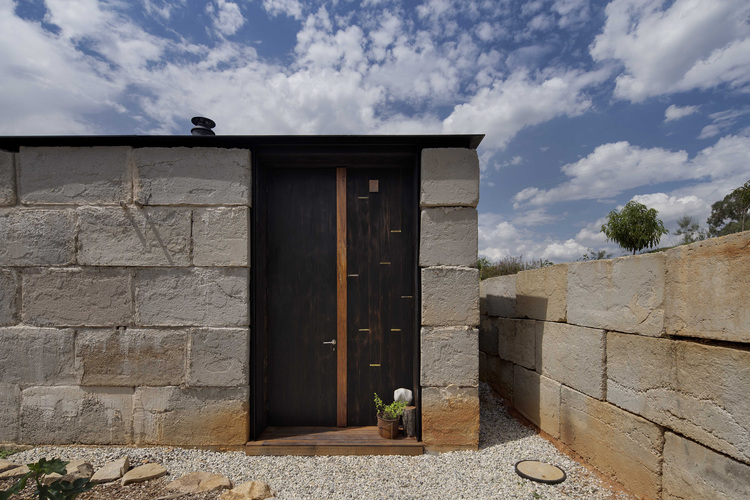 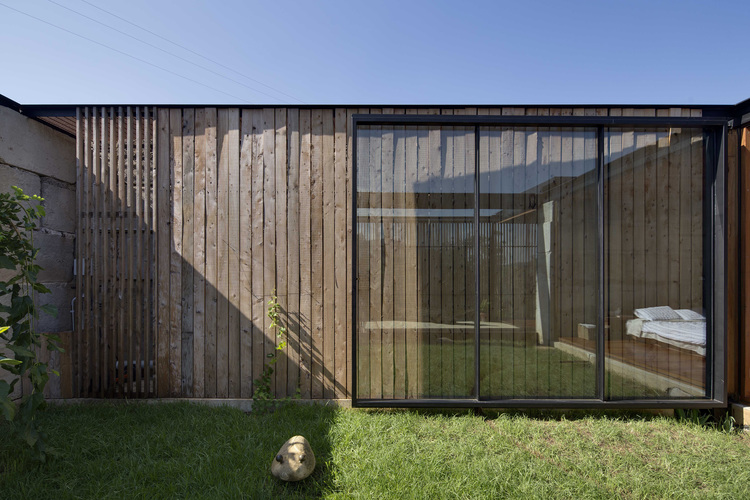 "This is a house which gently encourages its inhabitants to be gregarious without robbing them of the joy of solitude. Its open plan and flexible nature enables internal spaces to be joined or separated by a series of operable walls. Internal and external boundaries are blurred as entire walls and roofs peel back to welcome sunlight, nature and the sky." — AIA Victorian Chapter Jury Comments 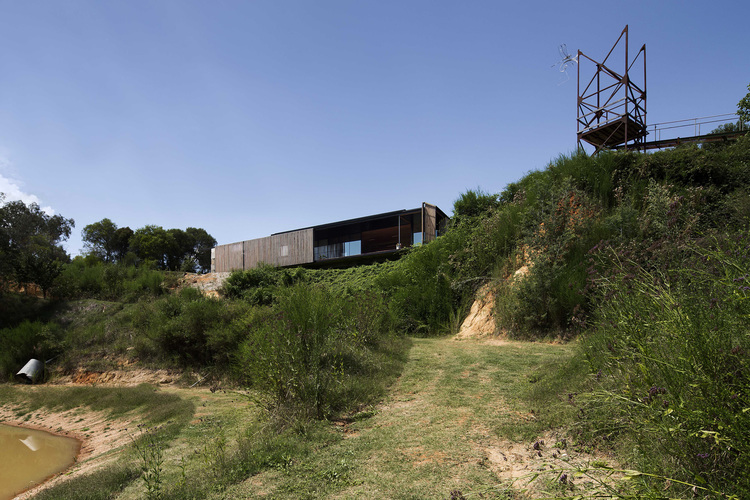 Sleeping Under the Stars

The plan was developed during construction to include a private courtyard and operable roof. The bedroom faces east as the client wished to wake at first light, with a large pivot window allowing him to 'sleep under the stars'. 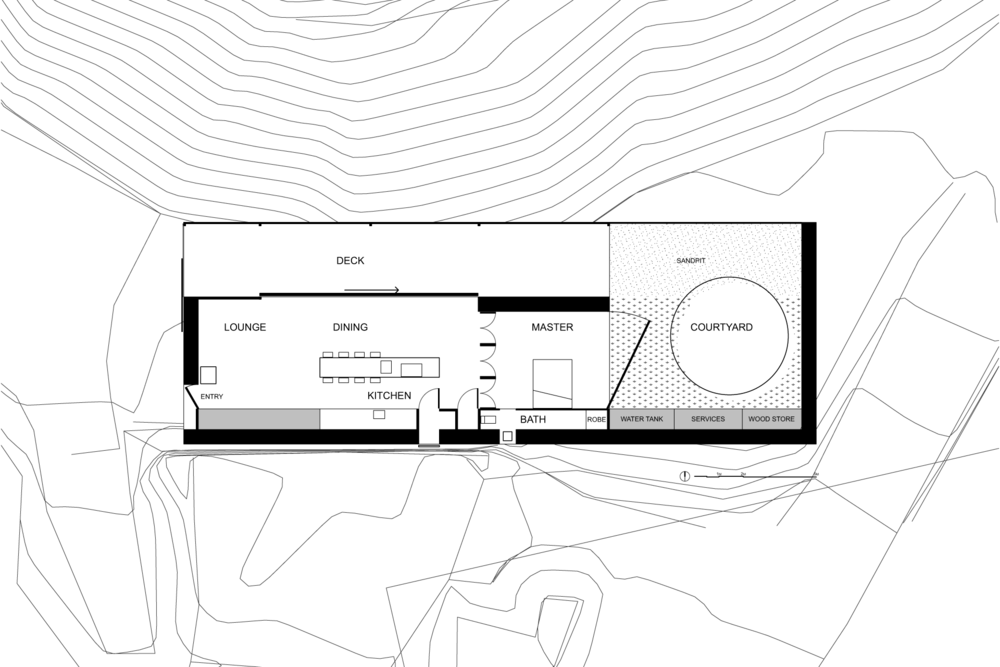