Shallard House Features a Living Area Suspended Above the Ground

Necessity is the mother of invention, so they say — and this applies to architecture as much as any other endeavour.

The designer and co-owner of Shallard House, engineer Guy Shallard of Lat Forty Five, says necessity was precisely the reason he chose to elevate the living area and suspend it like a bridge several metres above the ground.

"The long, narrow site is surrounded by other properties. And although the site is parallel to the lake, the living areas needed to be elevated to maximise the views and provide privacy." — Guy Shallard

The decision to suspend the living area within a bold bridge element was also influenced by Shallard's engineering background.

"In terms of the building structure, I like to push things a little. The bridge is heavily engineered — it could literally take the weight of a train. But the huge steel trusses provide the character, both inside and out. On the northern side the bridge is fully glazed between the trusses, while on the south side, cedar boards fill in the gaps between the steel." — Guy Shallard

The bridge is supported at either end by symmetrical cube-like volumes clad in charcoal concrete block with rusted Corten steel window boxes.

"The heavy window surrounds bring a sense of depth — an added dimension — to the two structures, which are essentially very simple. The protruding steel also helps protect the house from the harsh Central Otago sun." — Guy Shallard

The area beneath the bridge was developed as an alfresco living area, complete with barbecue and extractor hood. The kwila-clad terrace is completely open on two sides.

"We didn't want to enclose this space as it would have made the house far too large and it would have detracted from the drama of the bridge." — Guy Shallard

Individual steel stairs bolted into the block wall lead up to the living area, which is one large open-plan space. A decorative white-painted shelving unit, which incorporates a cantilevered stainless steel fireplace plinth and a television cabinet, serves as a room divider. The cabinet is designed as a cedar box that frames the television, just as Corten steel frames all the exterior windows.

At 2.4 meters, the ceiling height in this room is not especially high, but the proportions work with the length of the bridge, particularly when it is viewed from below. 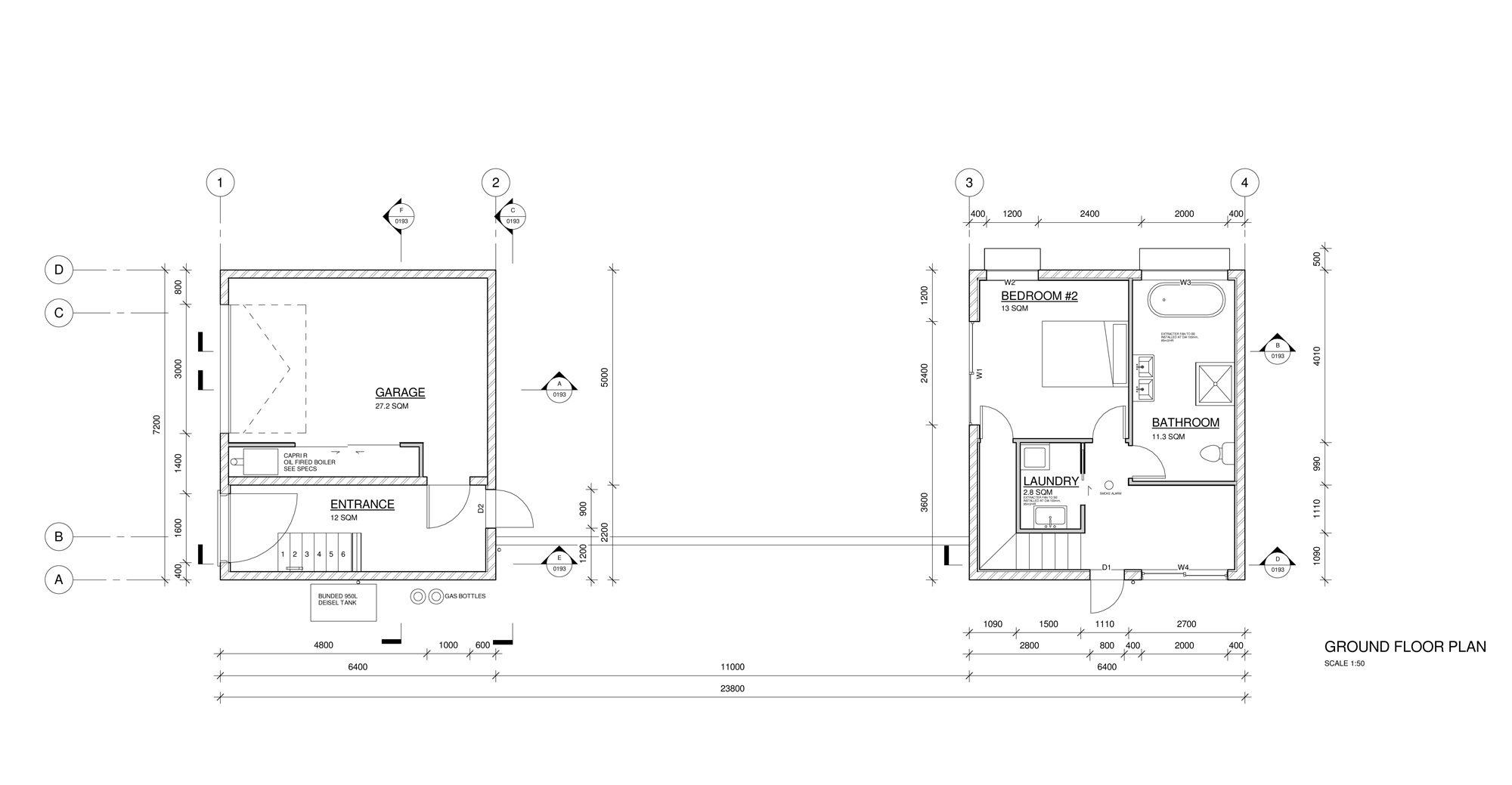 A galley-style kitchen is housed in one of the concrete block volumes. Stainless steel bench-tops are paired with grey-toned Bestwood Melamine cabinets. These are positioned so the owners can enjoy the view while preparing meals.

Other rooms in this part of the house include a second stairwell, bedroom and family bathroom, with a guest suite on the lower level.

The opposite volume, on the west side of the house, accommodates the main stairs and master suite. To provide visual continuity, the master bathroom is lined with 600 x 300 mm charcoal tiles that replicate the look of the exterior blocks. A study is located on the ground floor.