Stewart House: Bushfire Proof House That's Anything But a Bunker

House with a Sense of the Past

Dealing with increasingly stringent (but undoubtably necessary) bushfire regulations can be a challenge. The outcome can be homes that look more like bunkers. In contrast, Stewart House by Chenchow Little Architects is a bushfire proof house that doesn't sacrifice good looks. It feels light and airy and still manages to meet bushfire regulations.

From street level Stewart House is modest and low-lying -- the white brick home sits low into hillside above Whale Beach on Sydney's Northern Beaches. But as the slope of the land falls away towards native bushland the house opens and reveals itself, taking advantage of the view and proving there's no sign of bunkering here.

The use of fire-resistant brick, a fire-rated roof and bushfire shutters -- that can be hidden away in the structure of the roof -- maximize the house's fire tolerance without being obvious. Bushfire proof and stylish... 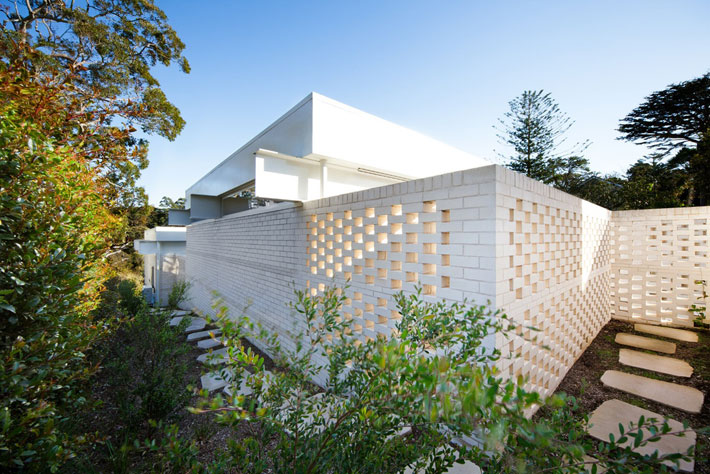 From the street, the majority of the home is hidden from view. Sunken into the hillside and concealed by native landscape the house is modest and unpretentious. Visitors get a sense of the simplicity of the house's palette -- white bricks and white steel -- and the high level of detailing, but the house's secrets are well hidden.

A flemish bond brick pattern with half bricks left out creates a brick screen for courtyards that lets in light but feels private. A band of butter colored 50mm bricks every ten courses adds texture and depth to what might have been a monotonous use of white. 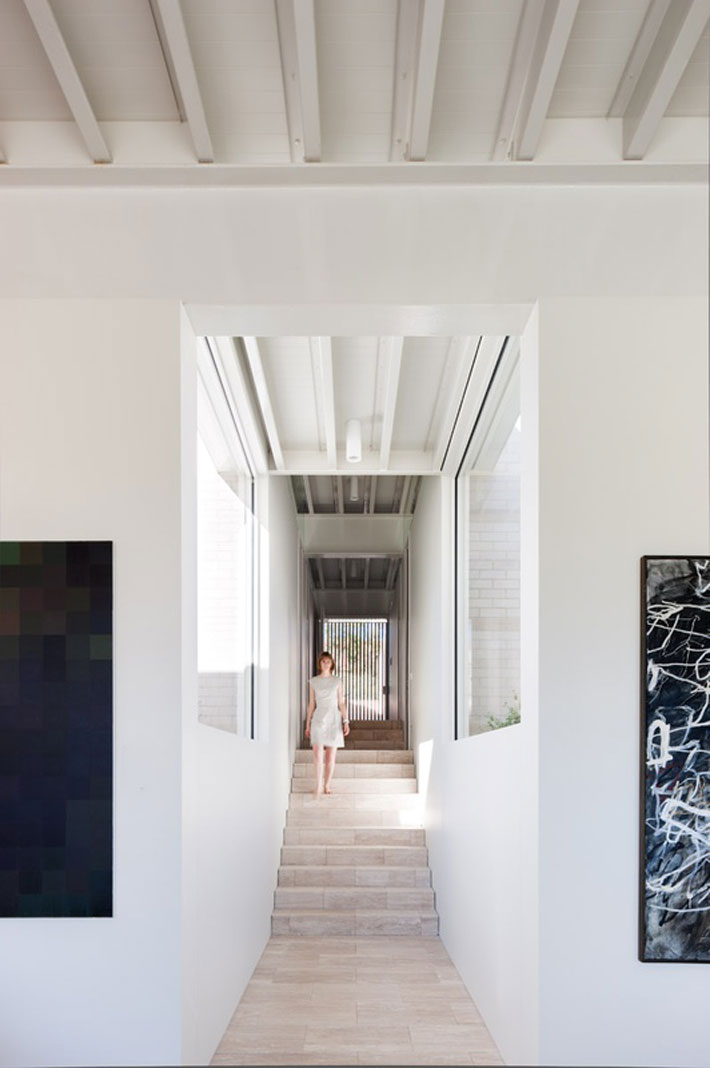 After entering, a long stepped corridor with beautiful travertine flooring leads you past two small courtyards into the main living area of the home. Perhaps without realizing it, you pass by four bedrooms, each with their own en-suite and private courtyard.

The ceiling height changes as the house steps down the hill, becoming increasingly high as you approach the living area. You don't notice the length of the corridor as this grand sequence distracts the eye and builds anticipation for what is about to be revealed... 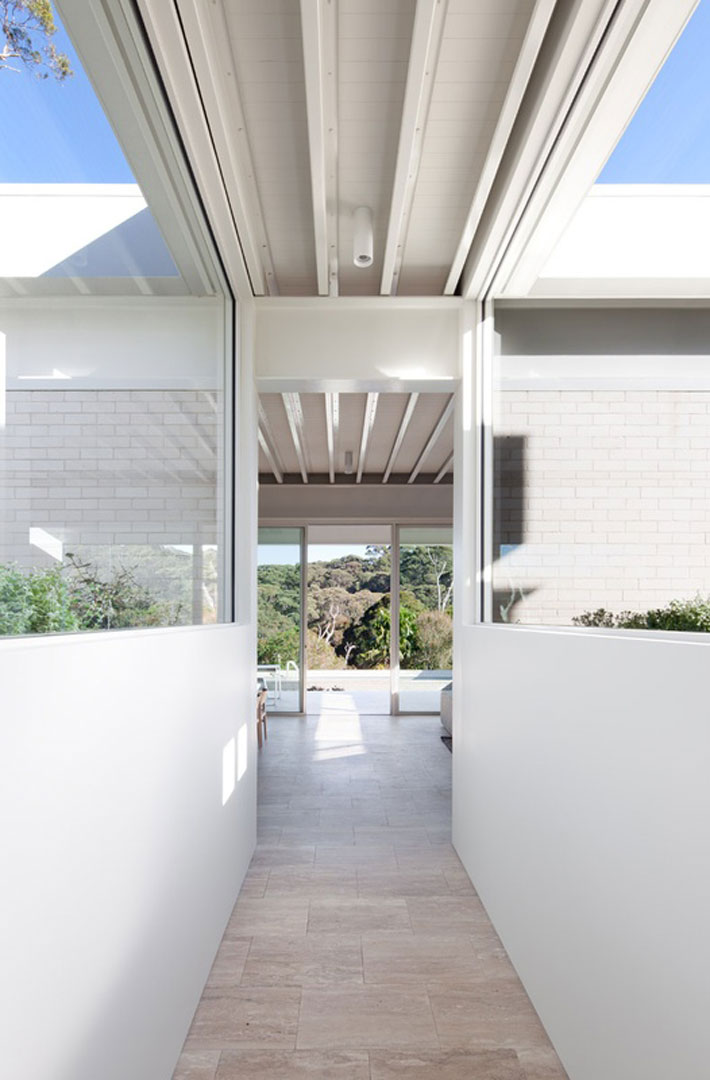 Once you reach the airy internal courtyards you catch a glimpse of the stunning view. The native bushland stretches out in front of you, perfectly framed and contrasted by the crisp white of the walls and exposed ceiling structure. 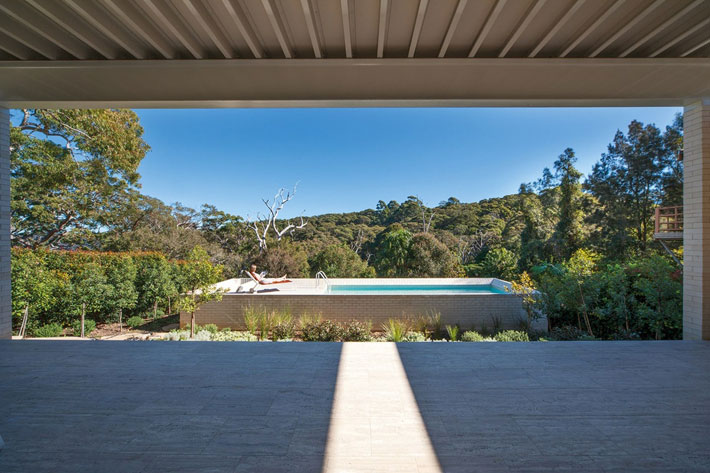 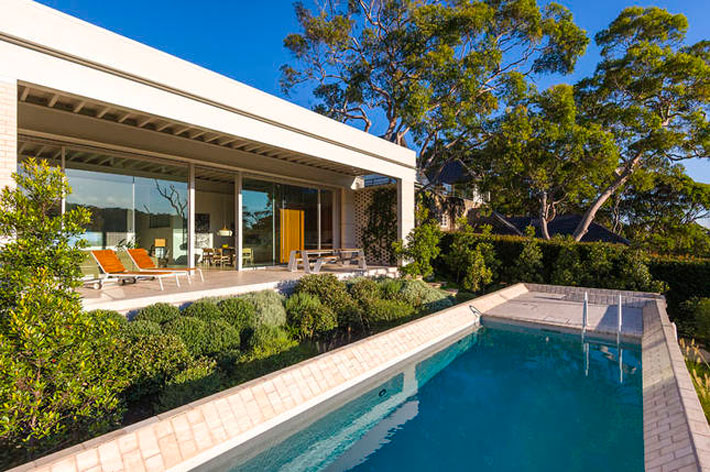 The pool is the real show-stopper of this house. It sits in a brick prism that looks like it could have been carved from the masonry itself. The walls of the pool are high enough to act as a pool fence, eliminating the need for additional fencing. A sun deck is included on the side of the pool and the whole area is surrounded by native vegetation, creating the sense of swimming in the middle of bushland. 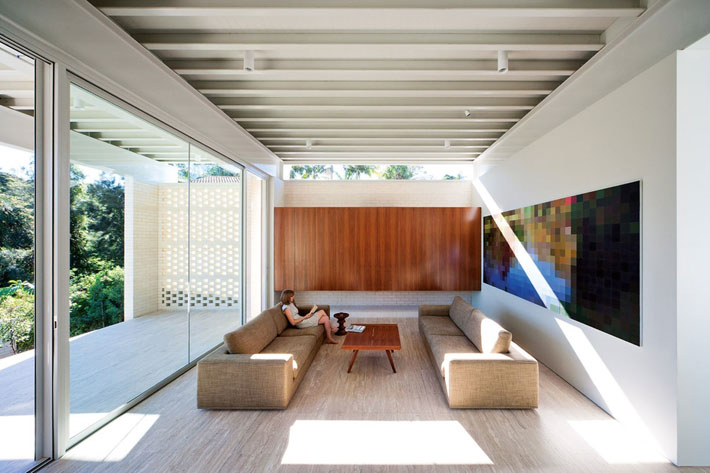 The simplicity of internal spaces makes the home feel almost mid-twentieth-century modern -- inspirations for the design were Los Angeles Case Study Houses and the work of Mies van der Rohe.

Exposed steel roof structure perform a double service of keeping the construction of the home simple and concealing bushfire shutters. A highlight window tucked neatly between the ceiling purlins and rafters lets north light into the house and makes the roof feel like it's floating. 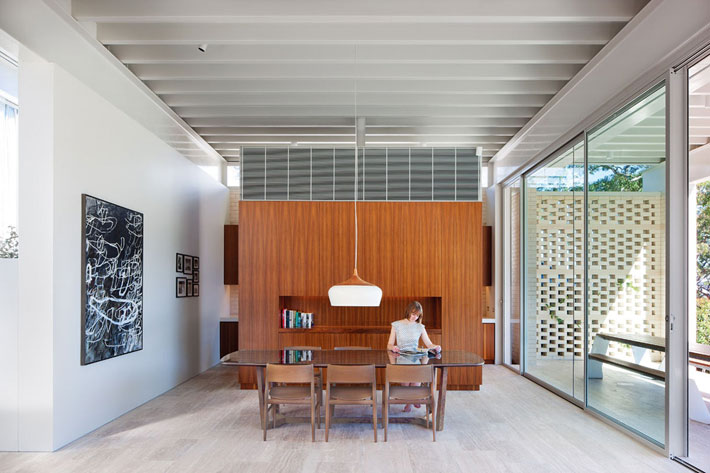 Rich timber paneling at either end of the living area injects some warmth into the otherwise white house. The timber wall behind the dining area conceals the kitchen, maintaining a clean, open look in the living area.

In the event of a bushfire, shutters can be lowered to protect the house. Otherwise, the house remains open, light and bright. In addition to the shutters, the house is constructed from fire resistant bricks and has a fire-rated roof.

The house is virtually bushfire proof. This adhered to regulations in the area, but also gives the owners piece of mind. 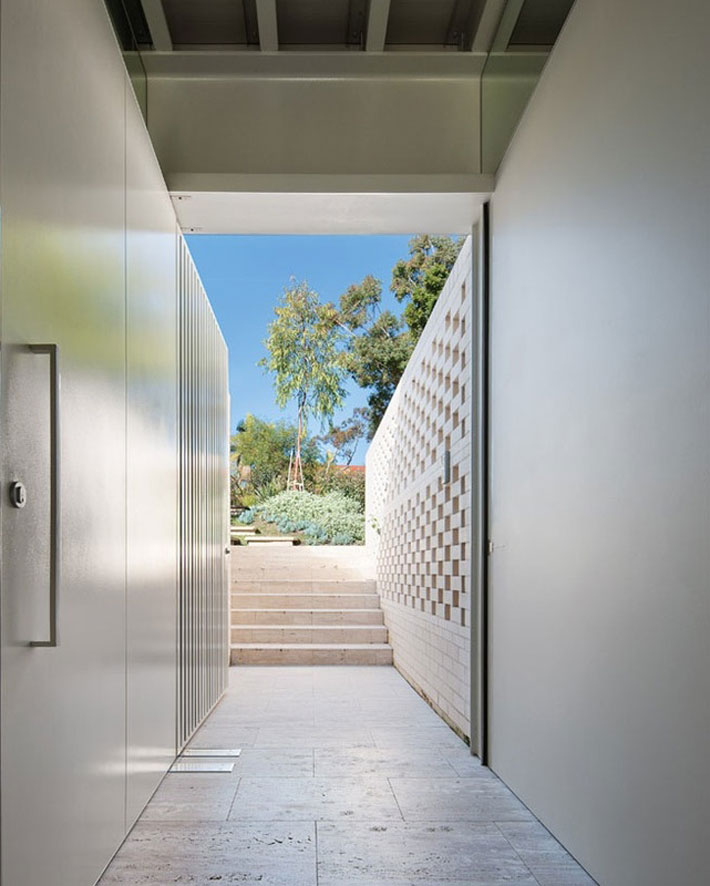 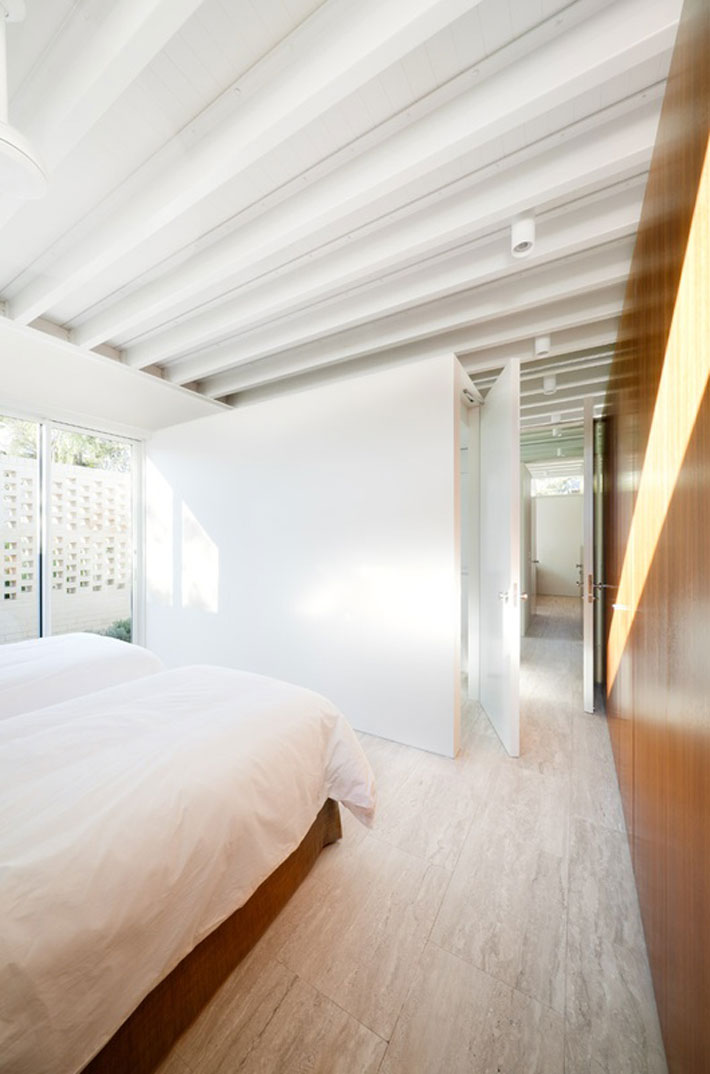 Each of the four bedrooms have their own en-suite and private courtyard, meaning family members or guests can spend as much or little time in common areas as they'd like. 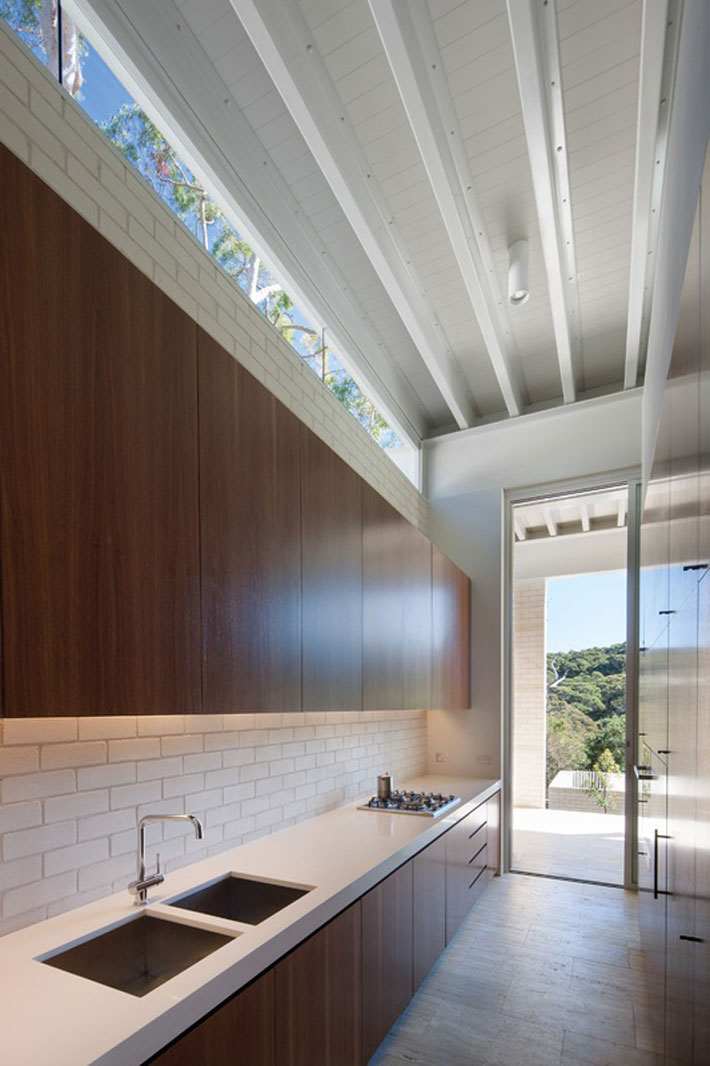 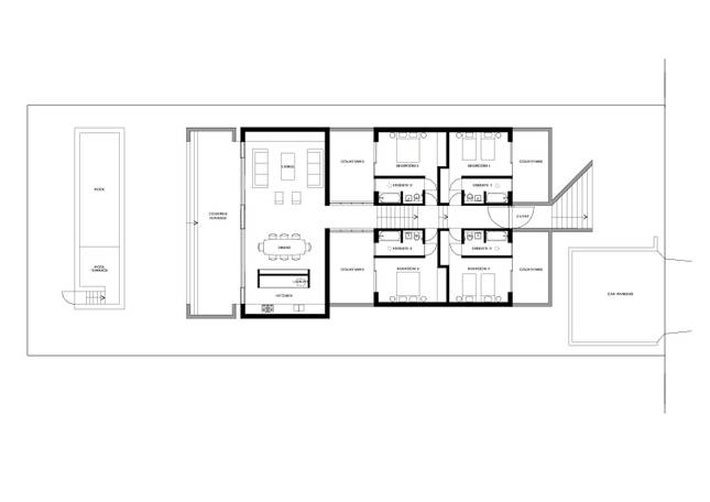 It's not easy to achieve this level of simplicity. To make it seem so effortless is paradoxically complex. It is additionally impressive that Chenchow Little Architects made this home feel so effortless given the need to abide by strict bushfire regulations.

What a relief that bushfire proof homes don't need to look or feel like bunkers -- in fact they can (and should) be every bit as homely, stylish and well-designed as any other home. Stewart House is a testament to the architects' skill, attention to detail and problem-solving abilities. It's a true modern classic.