This is How You Deal With an Unusual Triangular Site...

Sitting on a sunny corner block in Kensington, True North is the new home for an architect and family. So how does an architect deal with a challenging triangular site? With sinuous curves, of course! 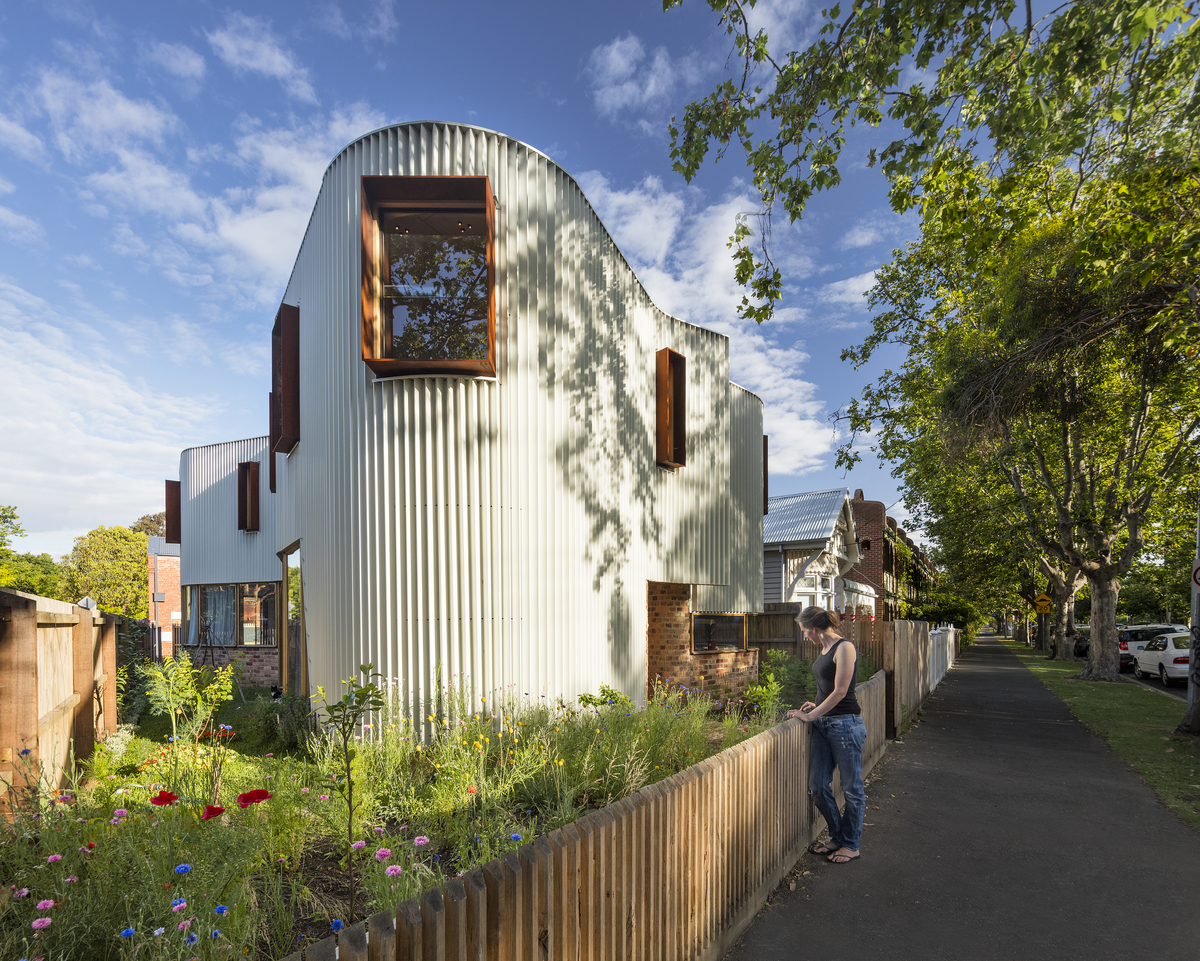 Where a triangular plan would have created difficult angles at the corners, the curved form rounds off the corners to hug the spaces, while still loosely following the site's geometry. 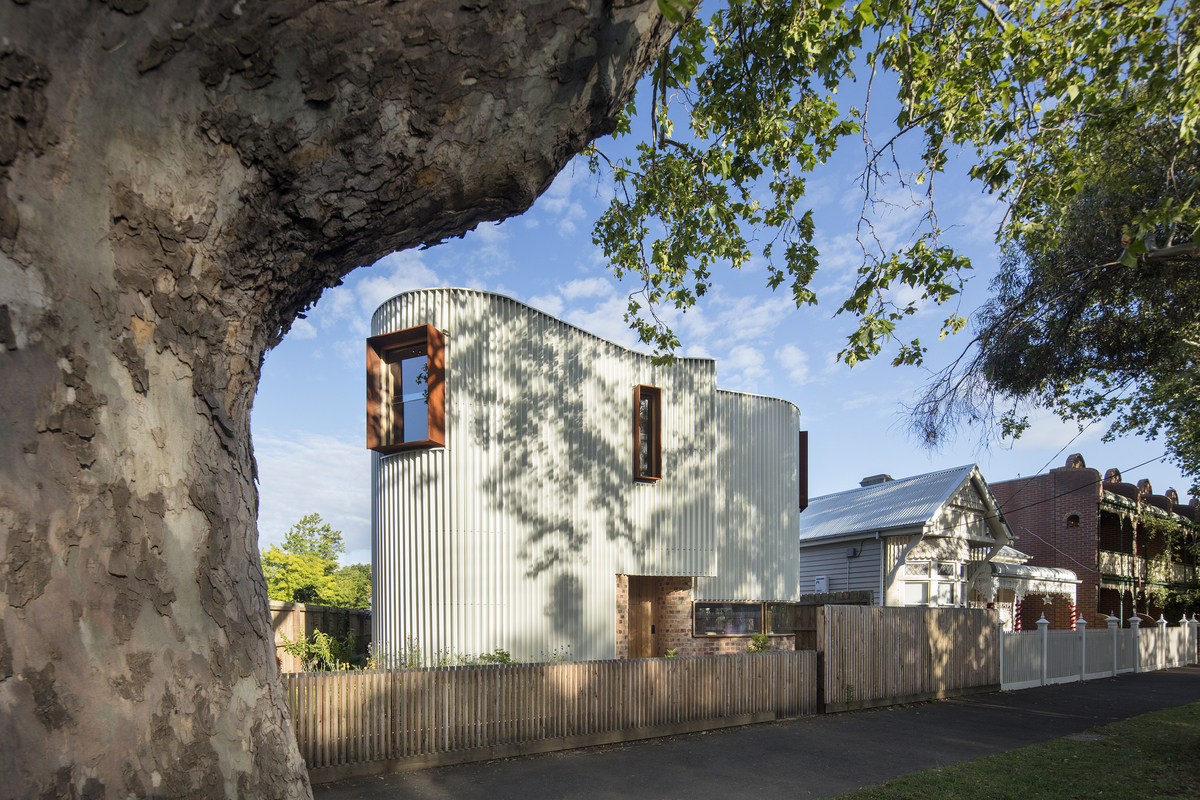 "The form dips away from the northern boundary, making a sunlit garden. At the rear, the house was bent northwards away from the southern neighbour, improving sunlight penetration to their backyard. A dimple was introduced between dining and sunken lounge along the front, eastern facade, indicating the front door." 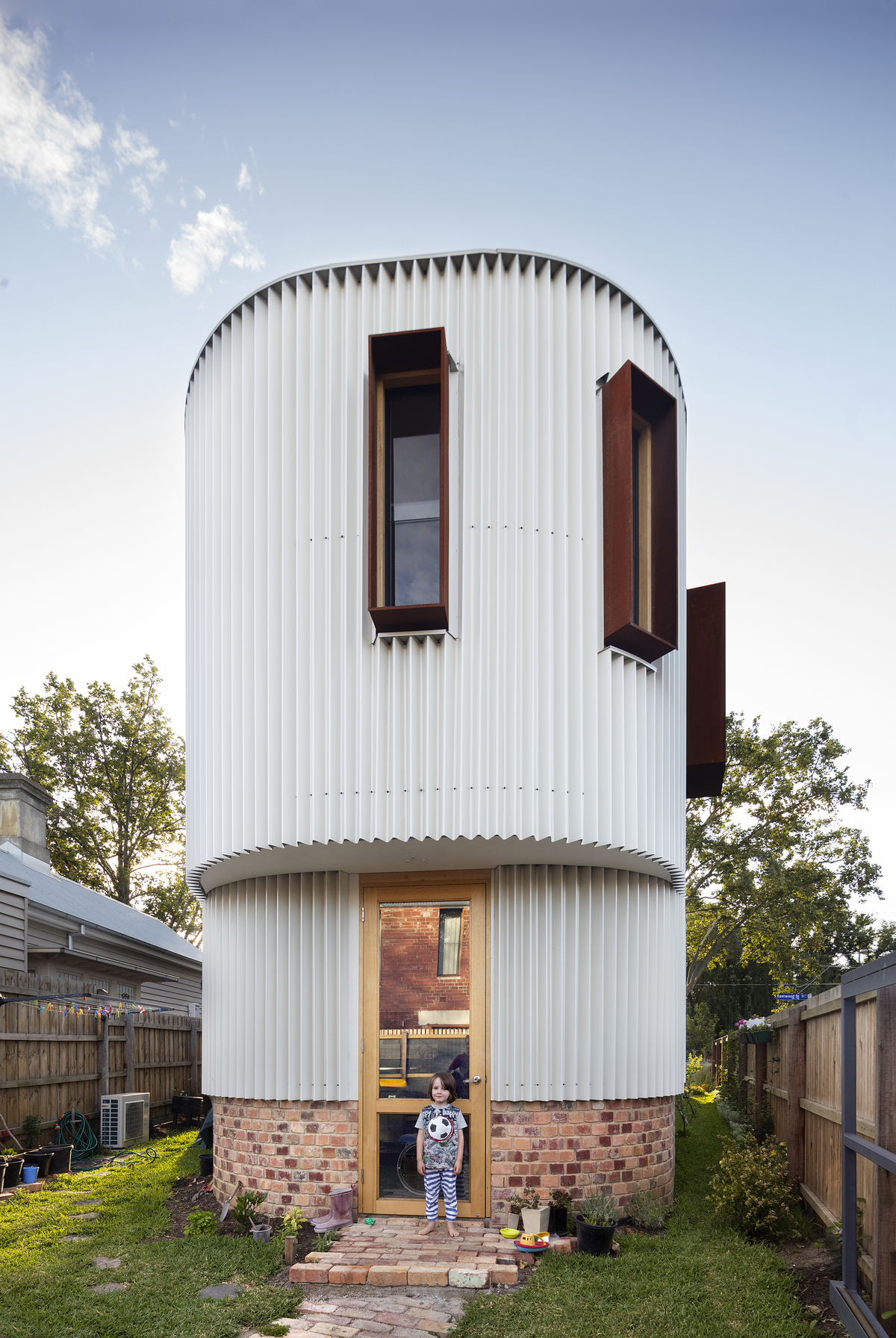 The folded steel facade was custom formed to create a seamless cladding for the curved home. "The continuous curved profile loops around the curving form, meeting at a single overlapped vertical seam indicating the front door. Over the back door, the facade splits and rejoins to create a porch... Rusted metallic hoods penetrate the folded facade to create window openings, enhance privacy and shade upper-level rooms." 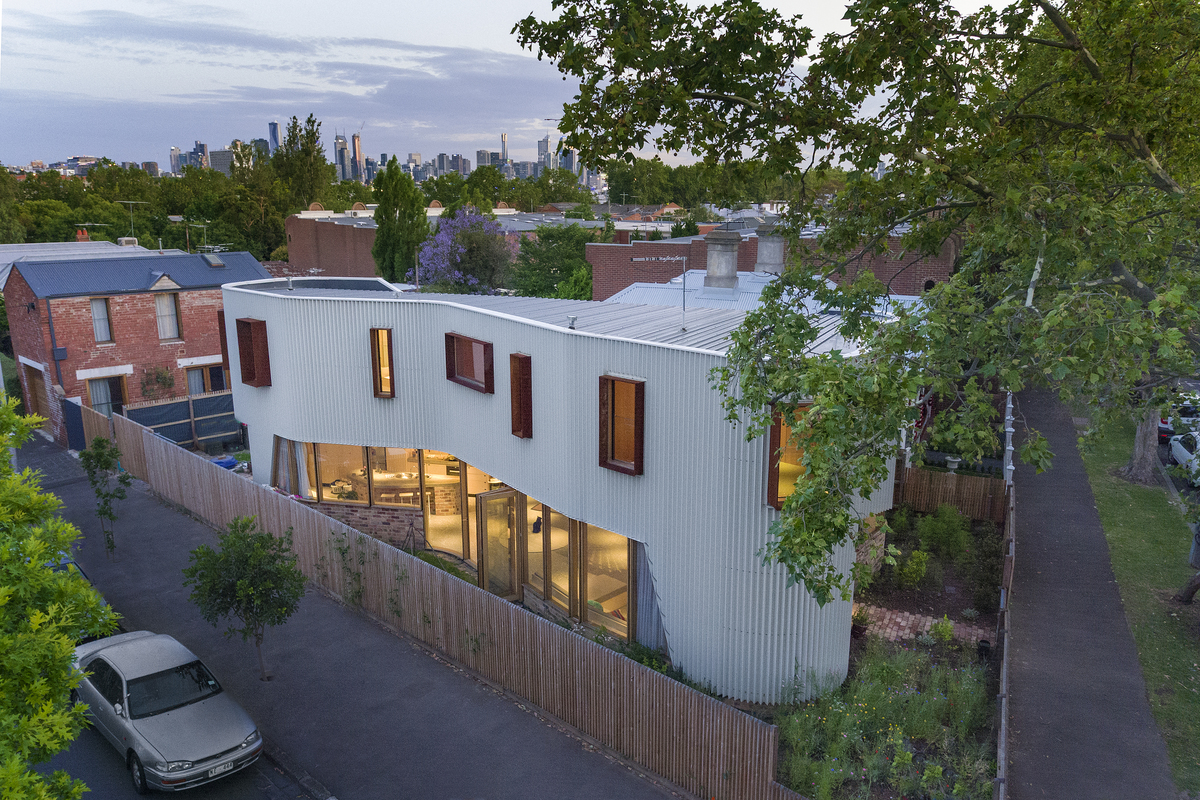 The site has two dwellings. One at the rear used to be stables built around in the 1880s. The stables have been renovated into a one-bedroom townhouse, while this new three bedroom house replaces a 1950s cottage in poor condition. Recylced bricks used in the project come fromt he demolished cottage, maintaining a sense of history on the site. 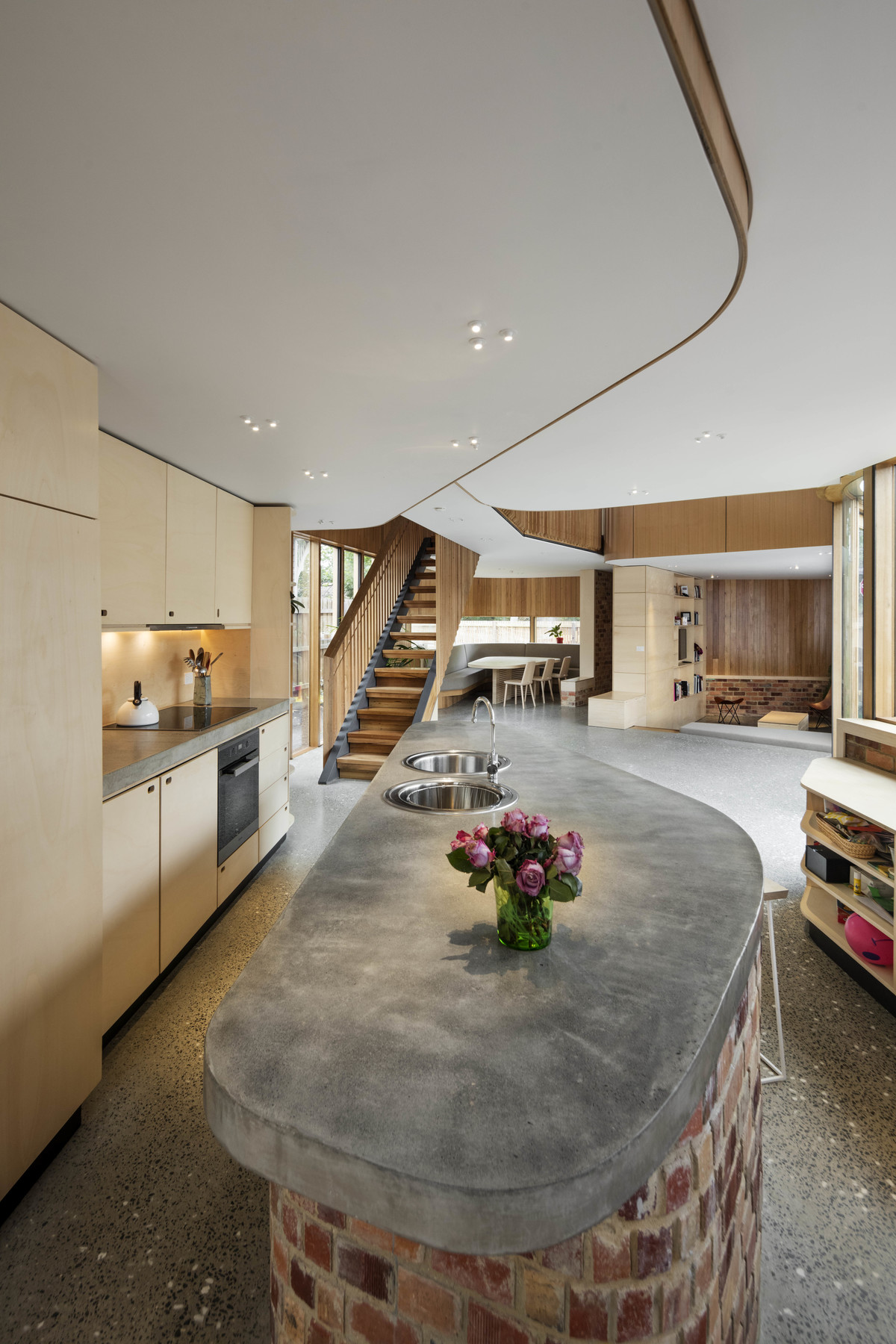 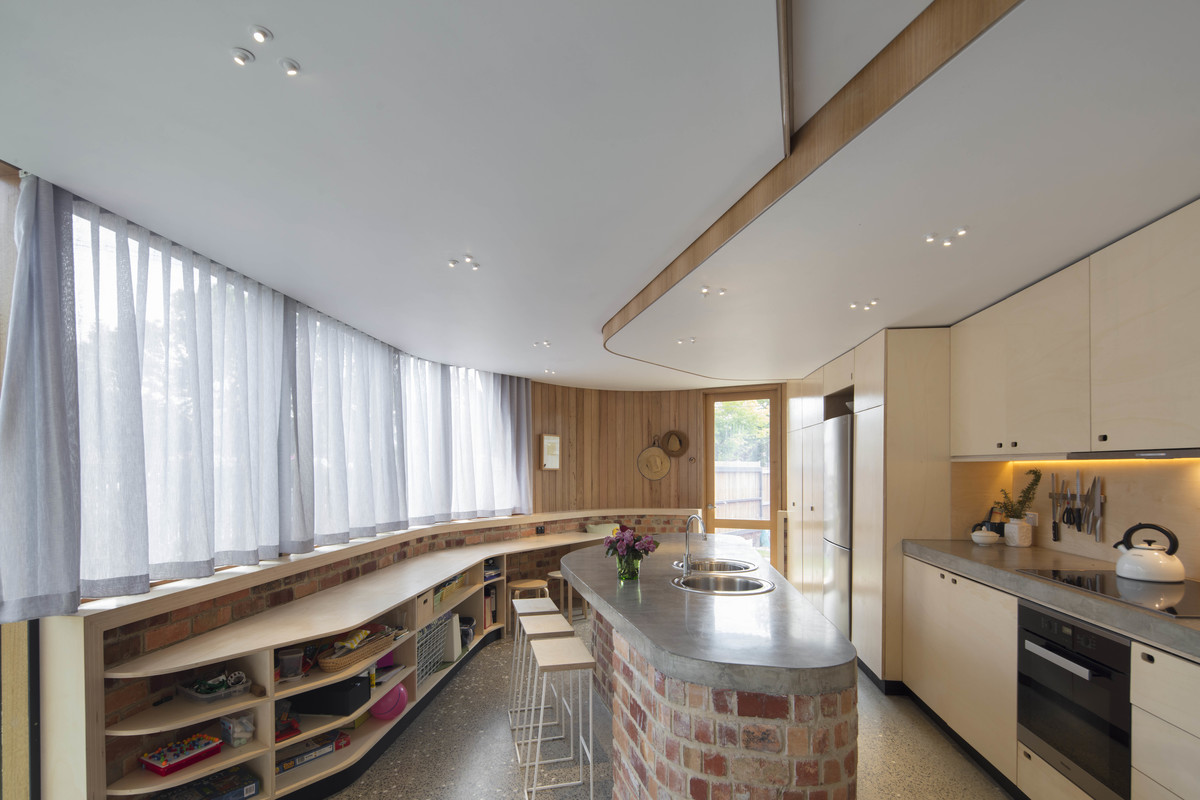 On the ground floor of this new sinuous beauty is a sunken lounge, kitchen, dining and a double-height atrium. The ground floor is a one-room space, where the curved corners create intimate nooks within the larger space. 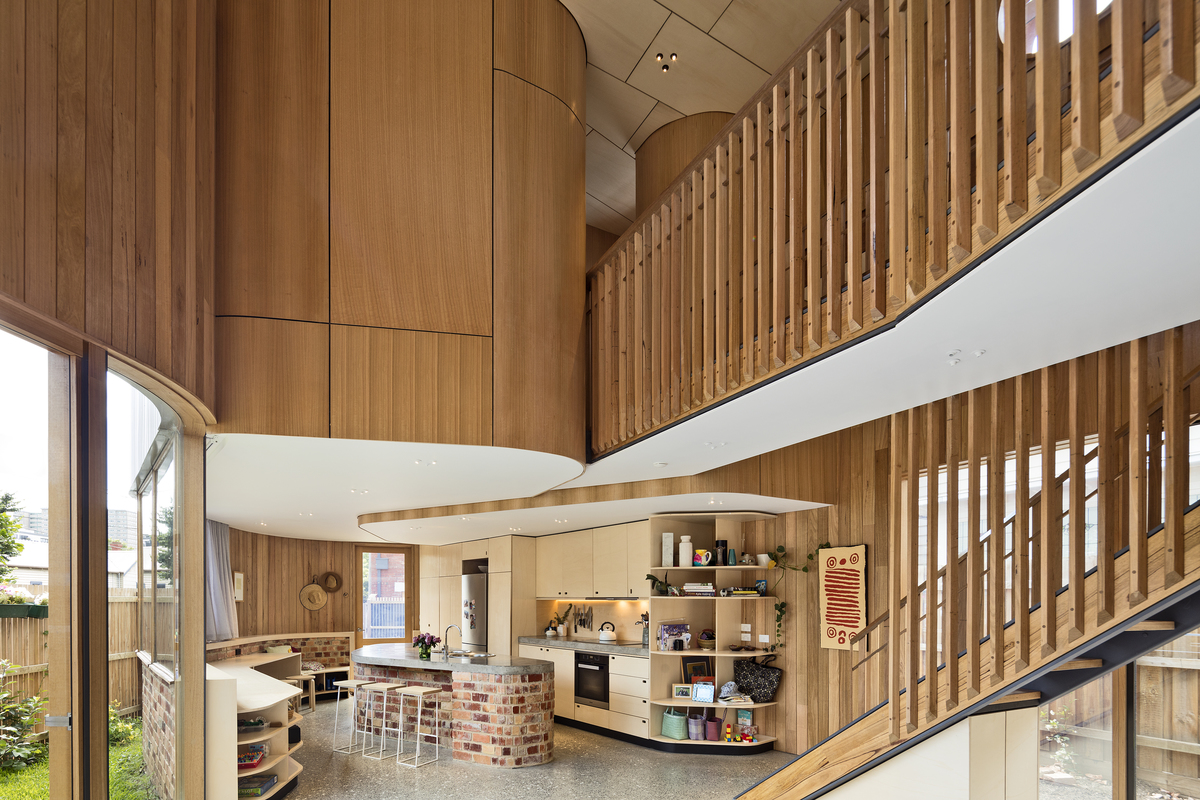 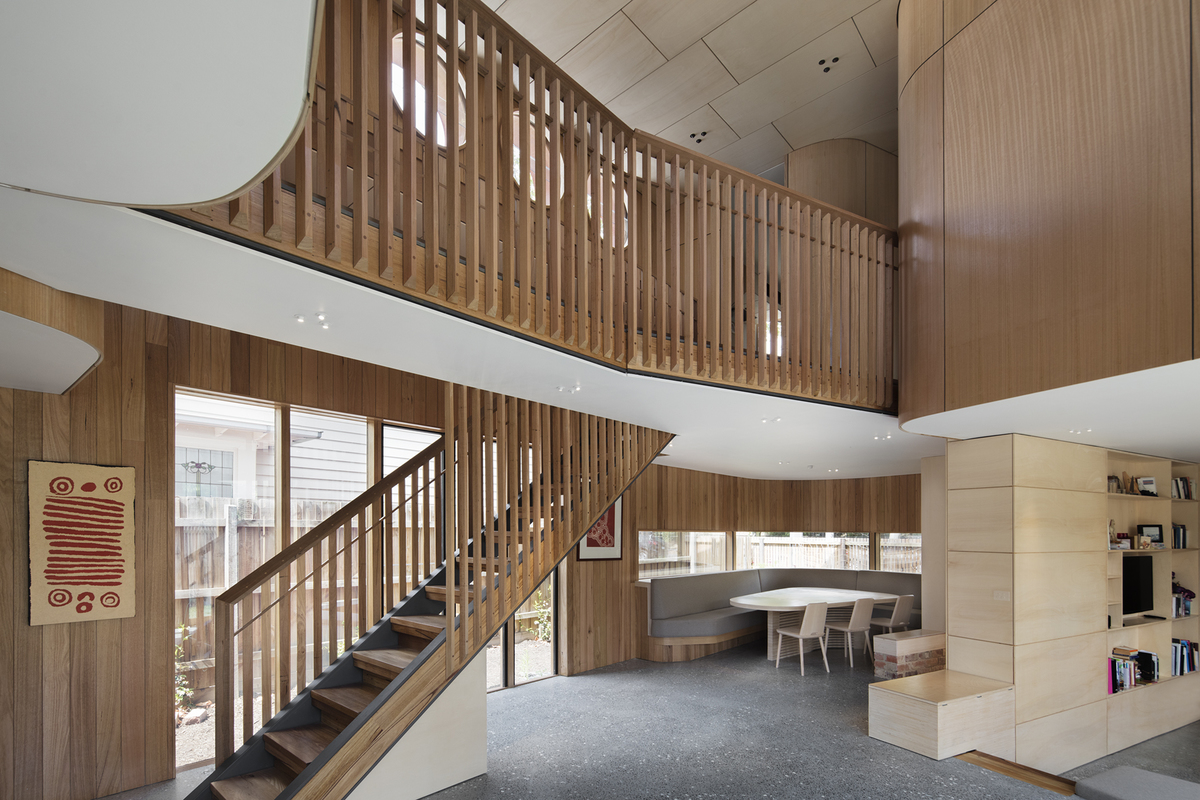 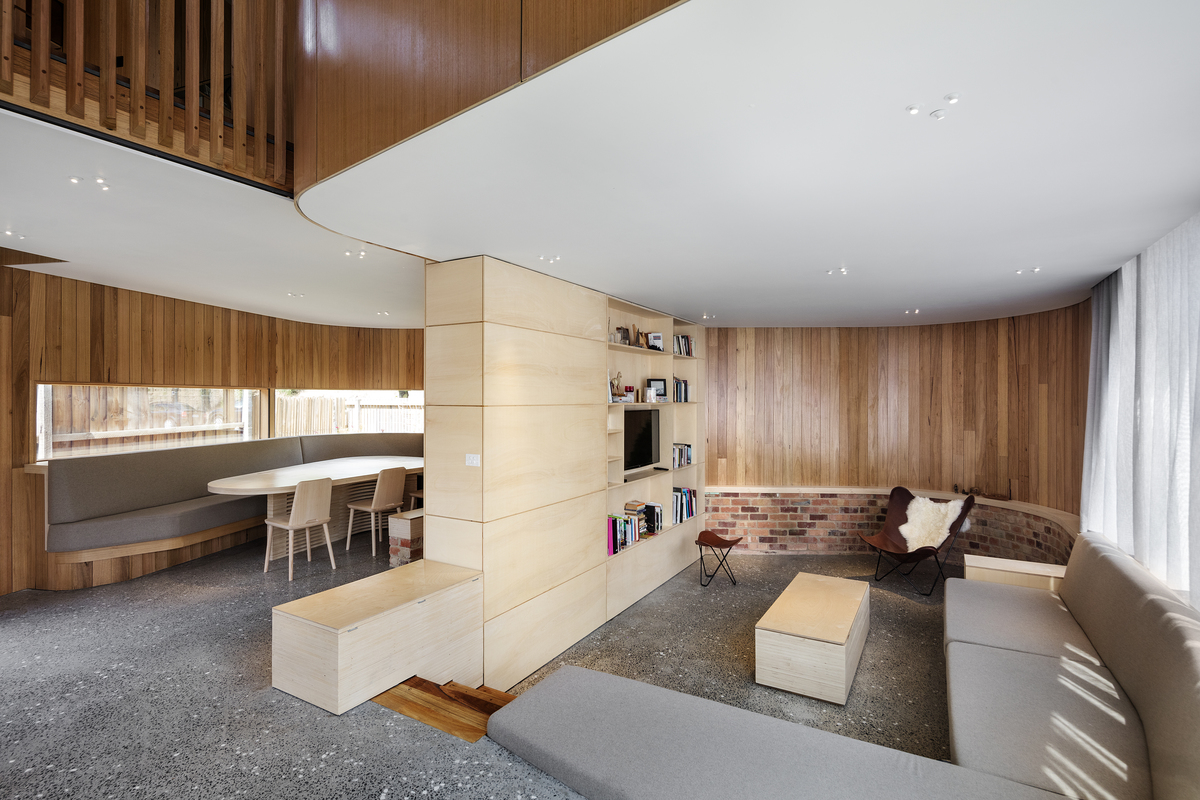 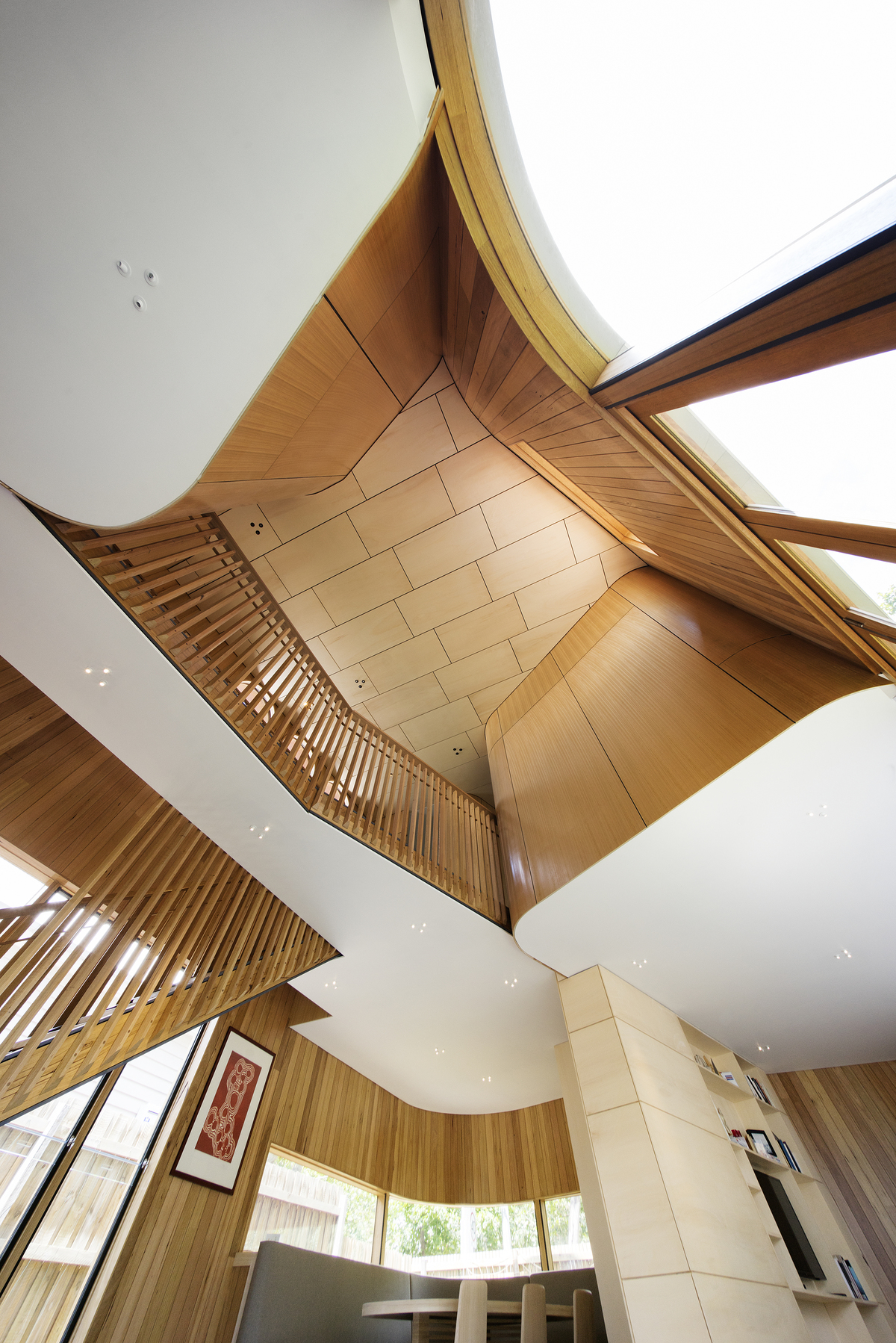 Upstairs the home feels like a treehouse, with green carpet and timber walls. Three pods hover above the atrium, connected by the stair and a bridge. These pods contain bedrooms and bathrooms. 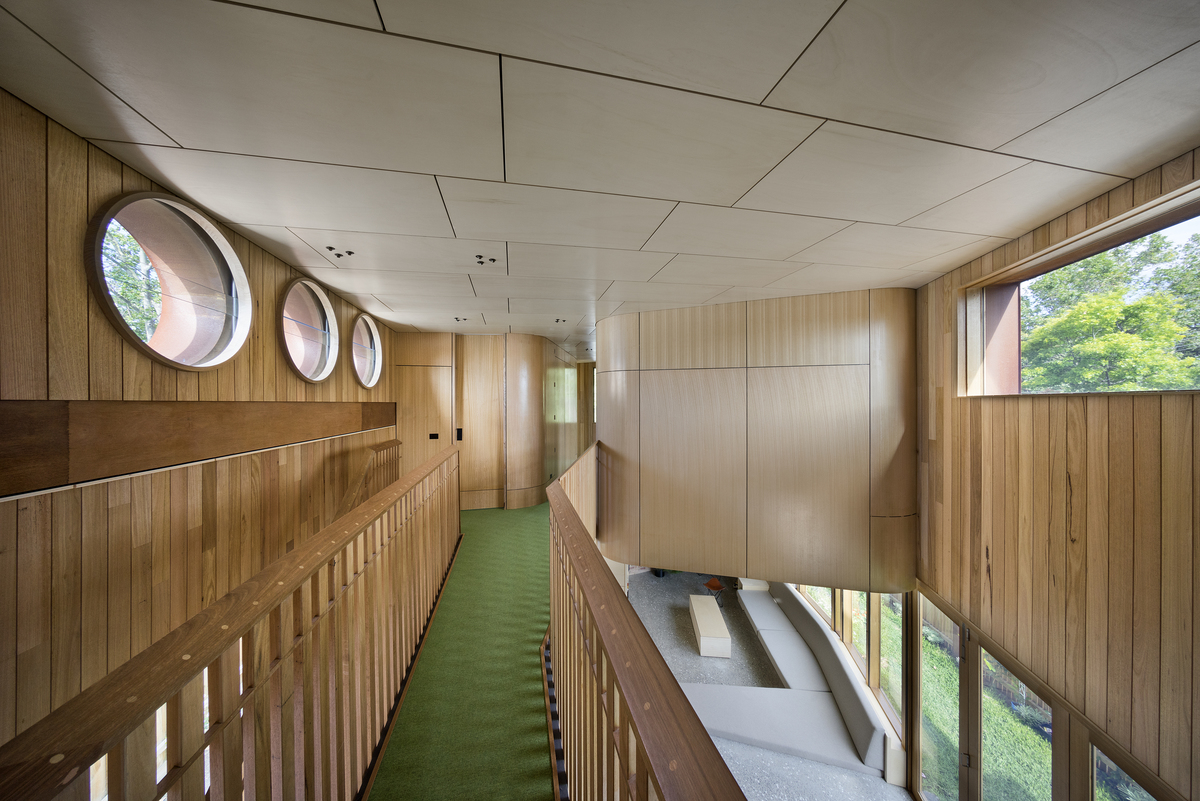 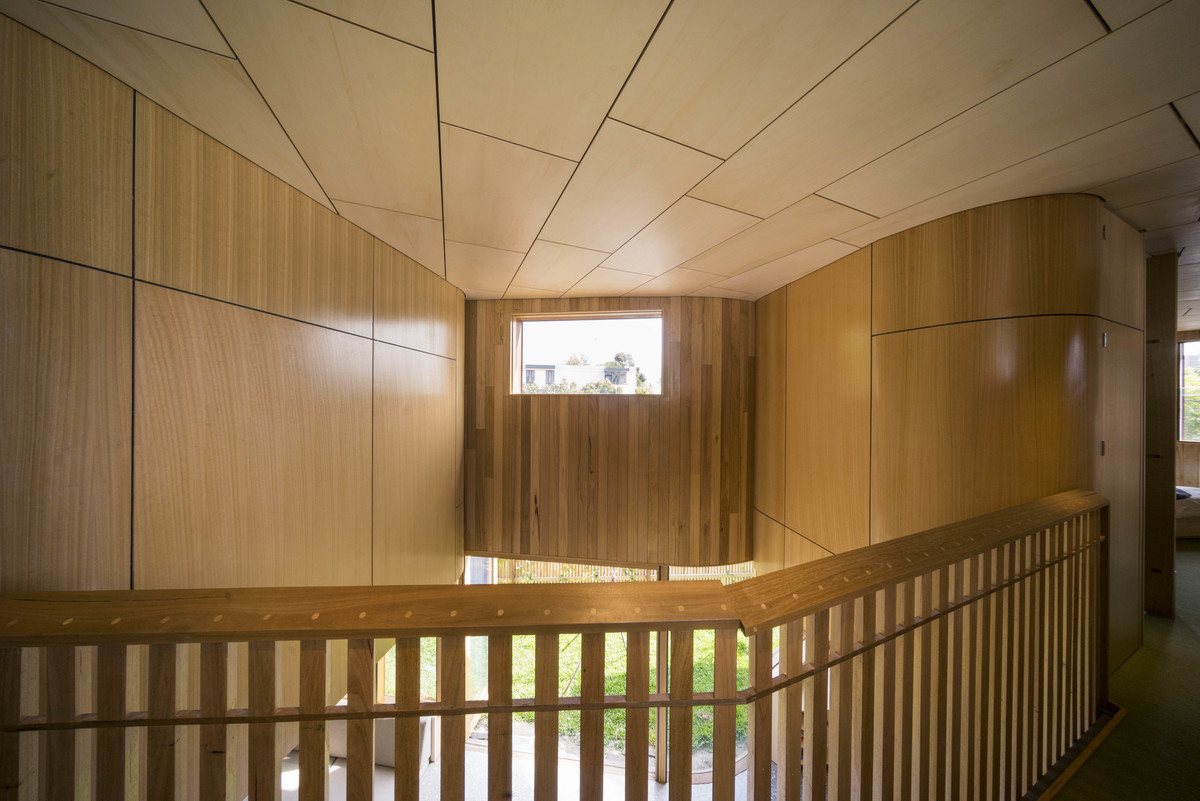 Sustainability was an important consideration for Tandem. "The form and openings were developed and tested through computer modelling and assessment to control sunlight penetration; to allow sunlight in to passively warm the slab in winter and exclude it in summer. A rating of 7.3 stars was achieved." Even the folded facade itself acts as an extra layer of insulation for the home. While this wasn't tested, it acts like a puffer jacket, trapping still air in its folds to protect the home. In summer the atrium can open up at low and high level for a night purge, flushing the heat from the day and cooling down the insulated slab and bricks. 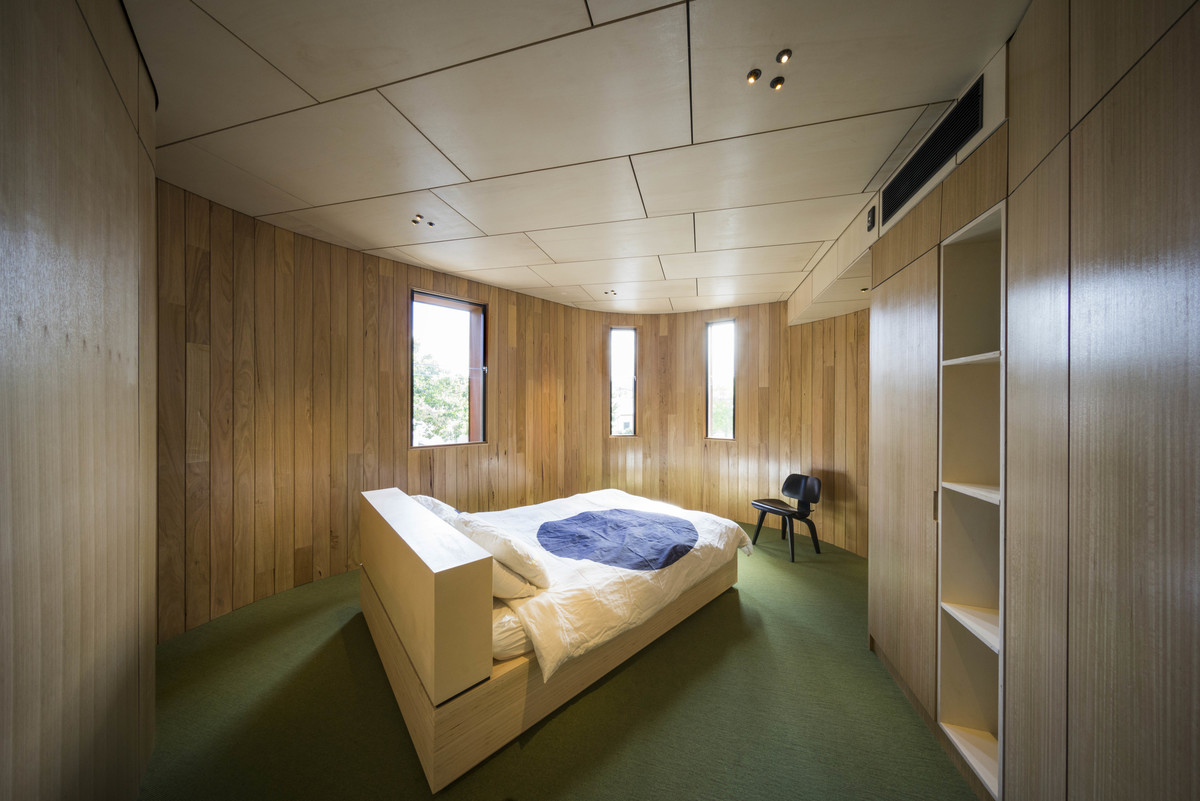 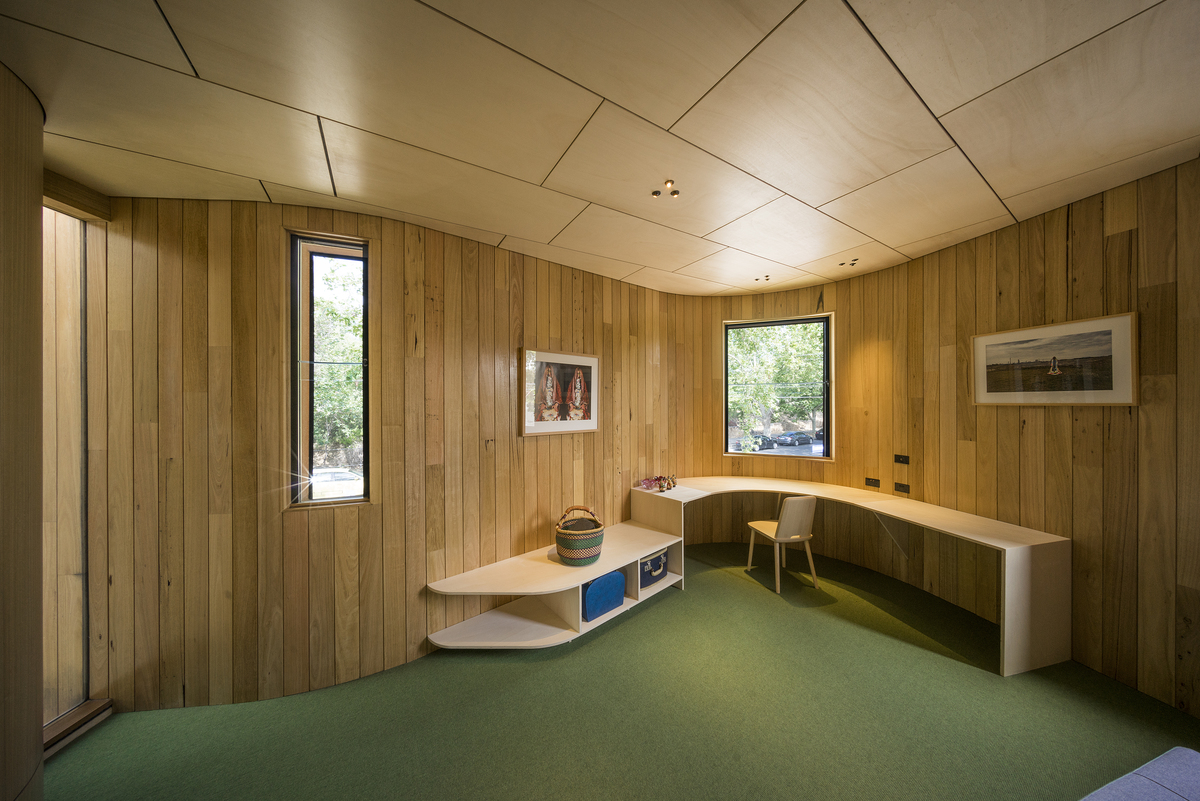 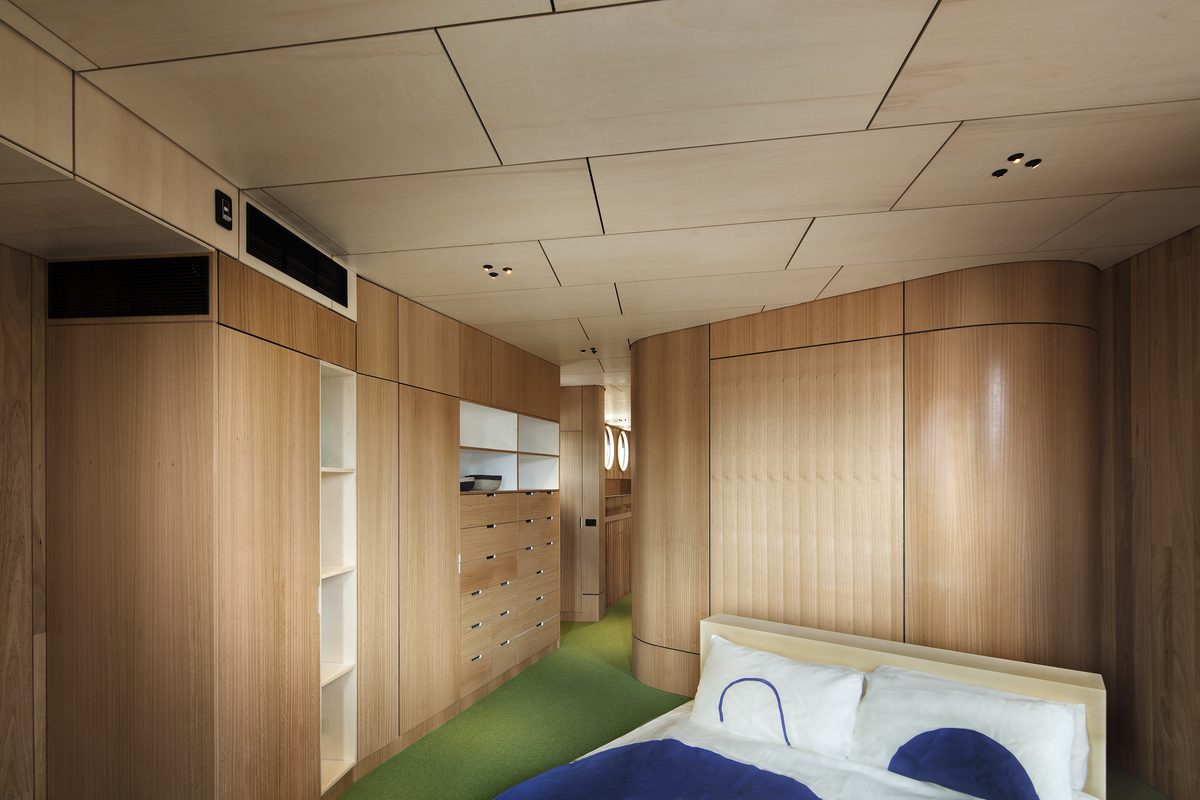 Depending on who you are, or how you're feeling, the house can take on many forms, "the curving façade along Eastwood interprets a neighbouring bay window. The pleated façade whirls and billows, like a dress. The portholes remind me of industry, the hoods a fort. The low brick walls connect to Kensington’s masonry heritage. Being inside is like looking out through a water drop, or hiding inside a musical instrument." 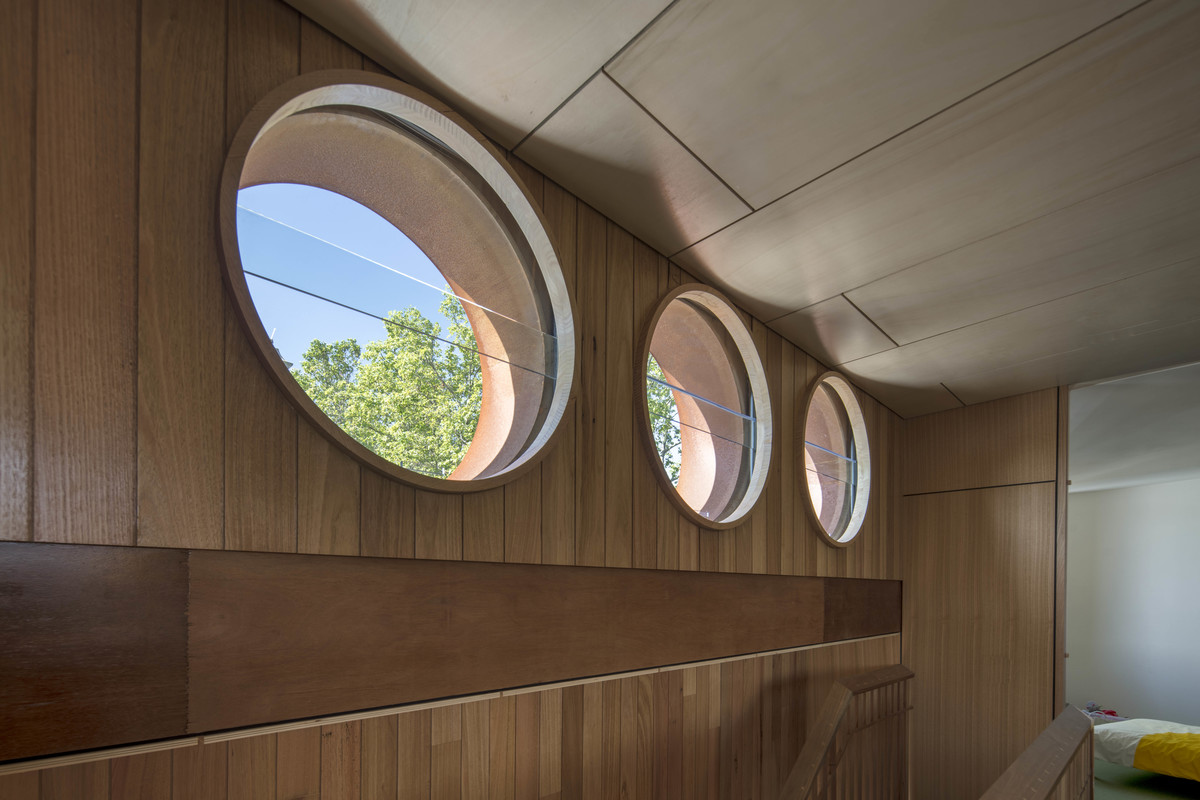 Tell us what you love about True North...