Not your average terrace extension...

When renovating a terrace, it's quite common to leave only the mandatory two front rooms of the original home and make a clean break at the rear, adding a new open-plan living space and possibly even a second storey with additional bedrooms. With this terrace extension, the owners opted for something a little different which better suits their lifestyle... 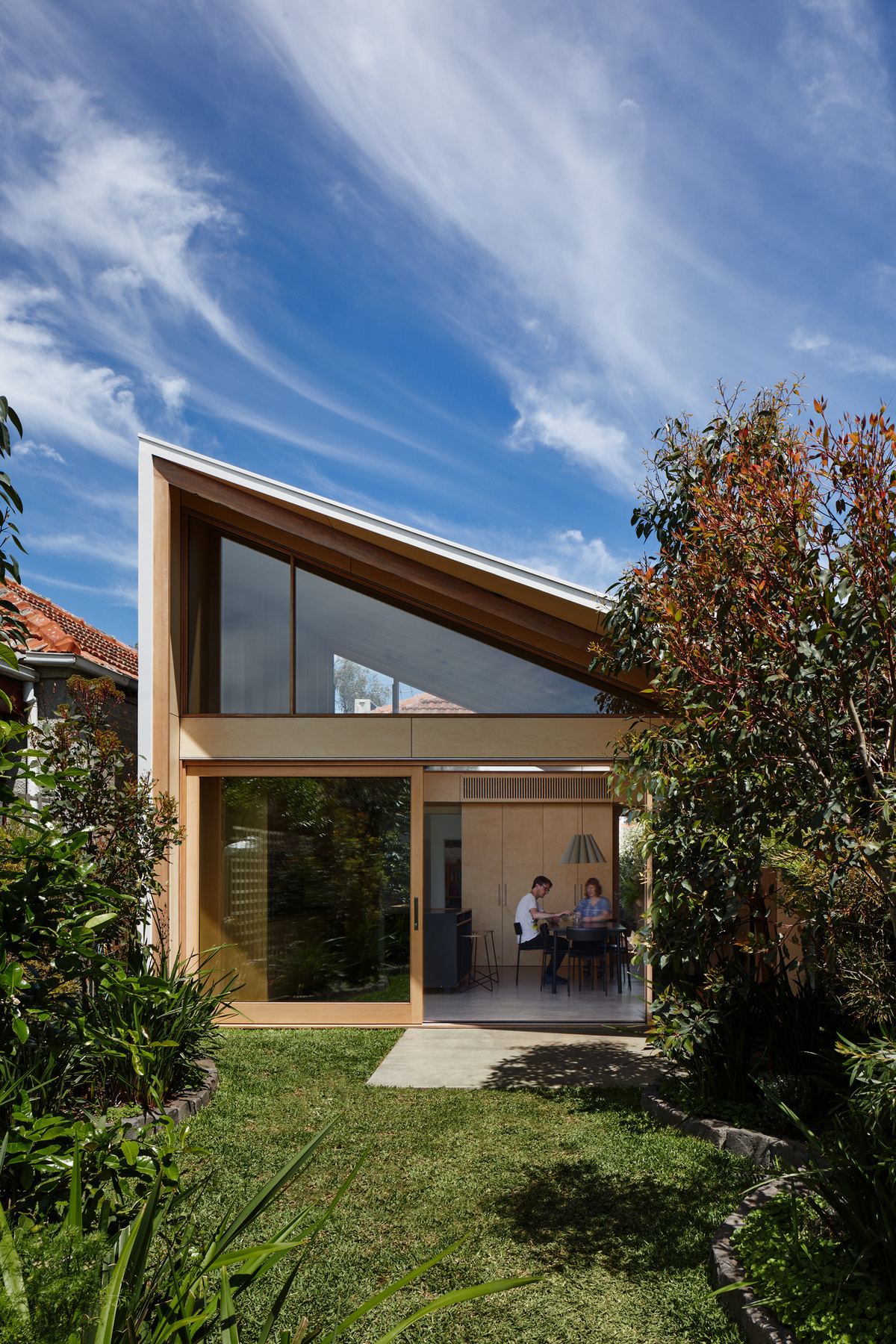 "The owners, a young family, felt they had plenty of room in the original house", explains architect Sarah Kahn, it was the cramped and tired 90s addition that was letting the whole house down and blocking access to the northern light and the rear garden the owners loved. 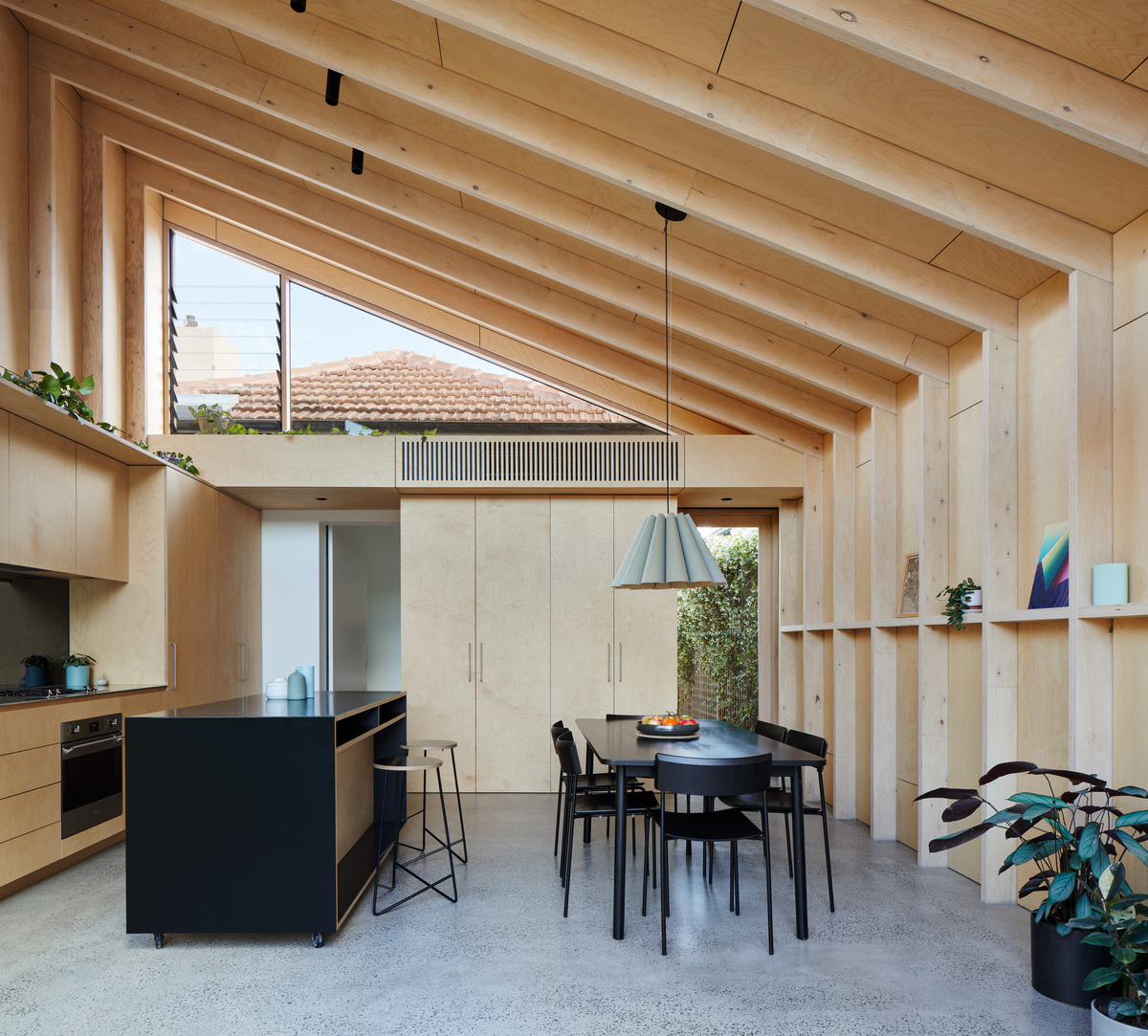 So, rather than an extensive alteration and addition, they opted to keep their Edwardian semi-detached terrace intact and replace only the more recent addition; all without losing any of their beloved bush-style backyard. 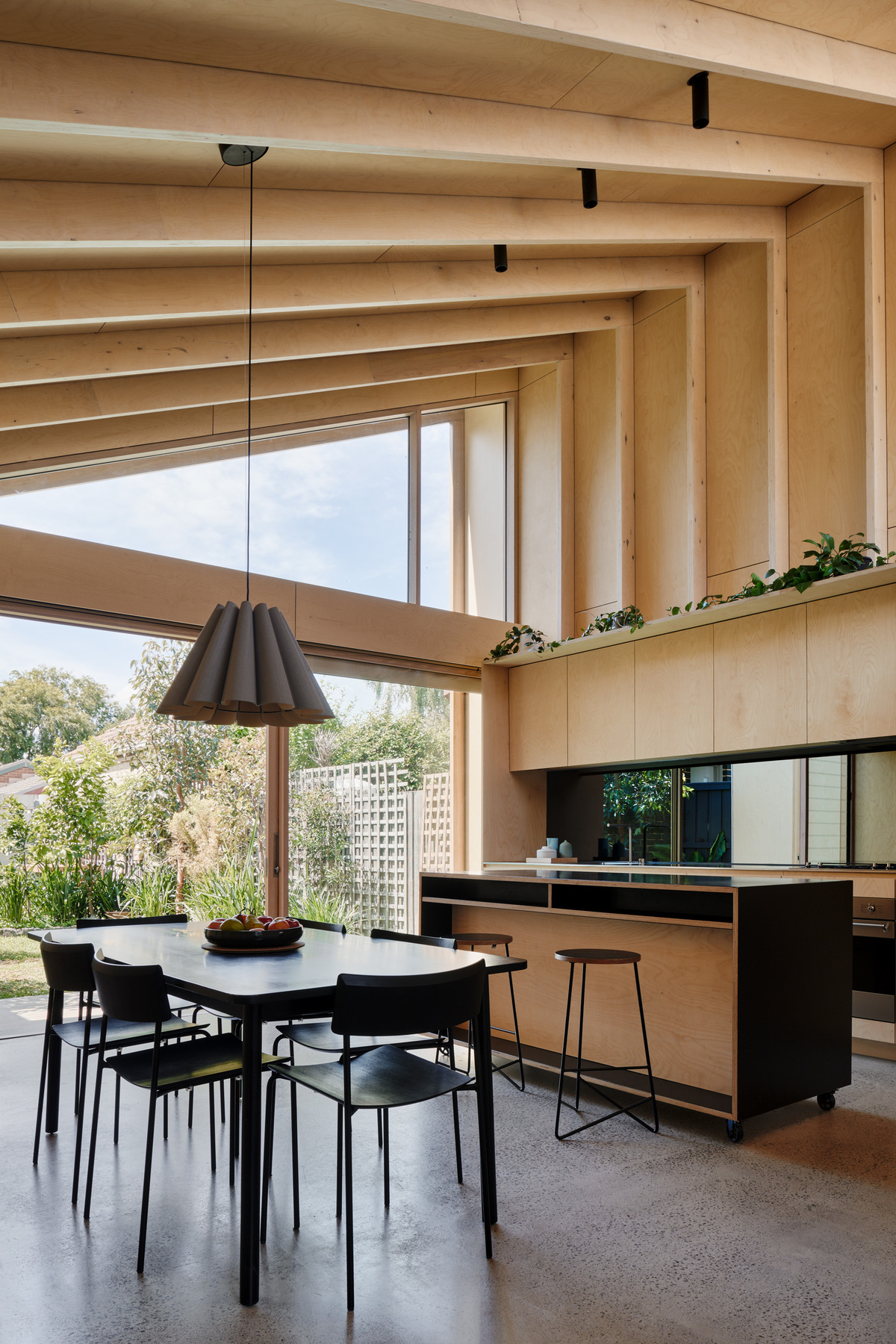 The addition is a single room extension to the house taking up no more than the footprint of the original kitchen. Designed to take advantage of the light and the established garden, the new kitchen and dining space feels like a modern bush shack in the middle of the city, hence its name, Brunswick Bush Shack. 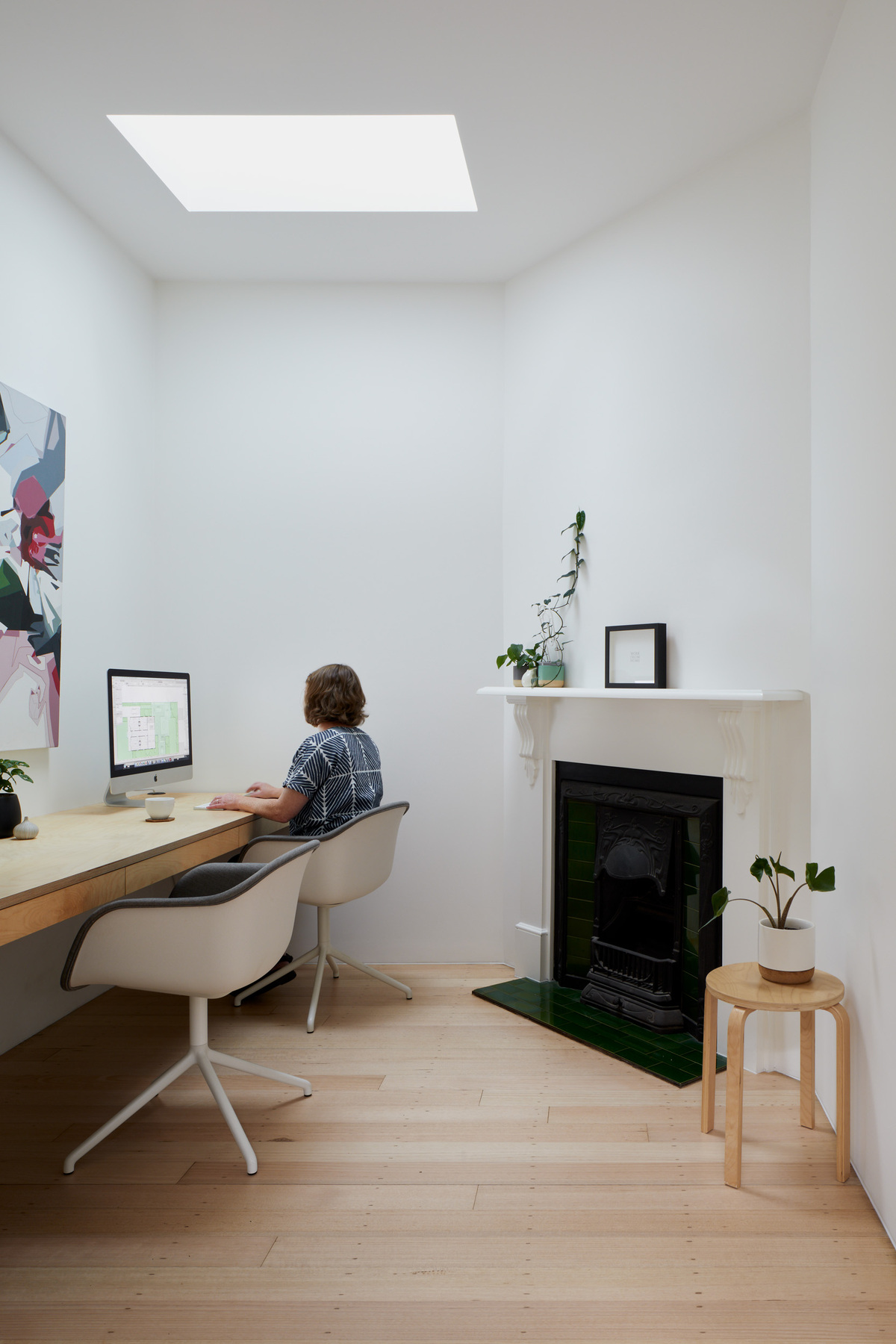 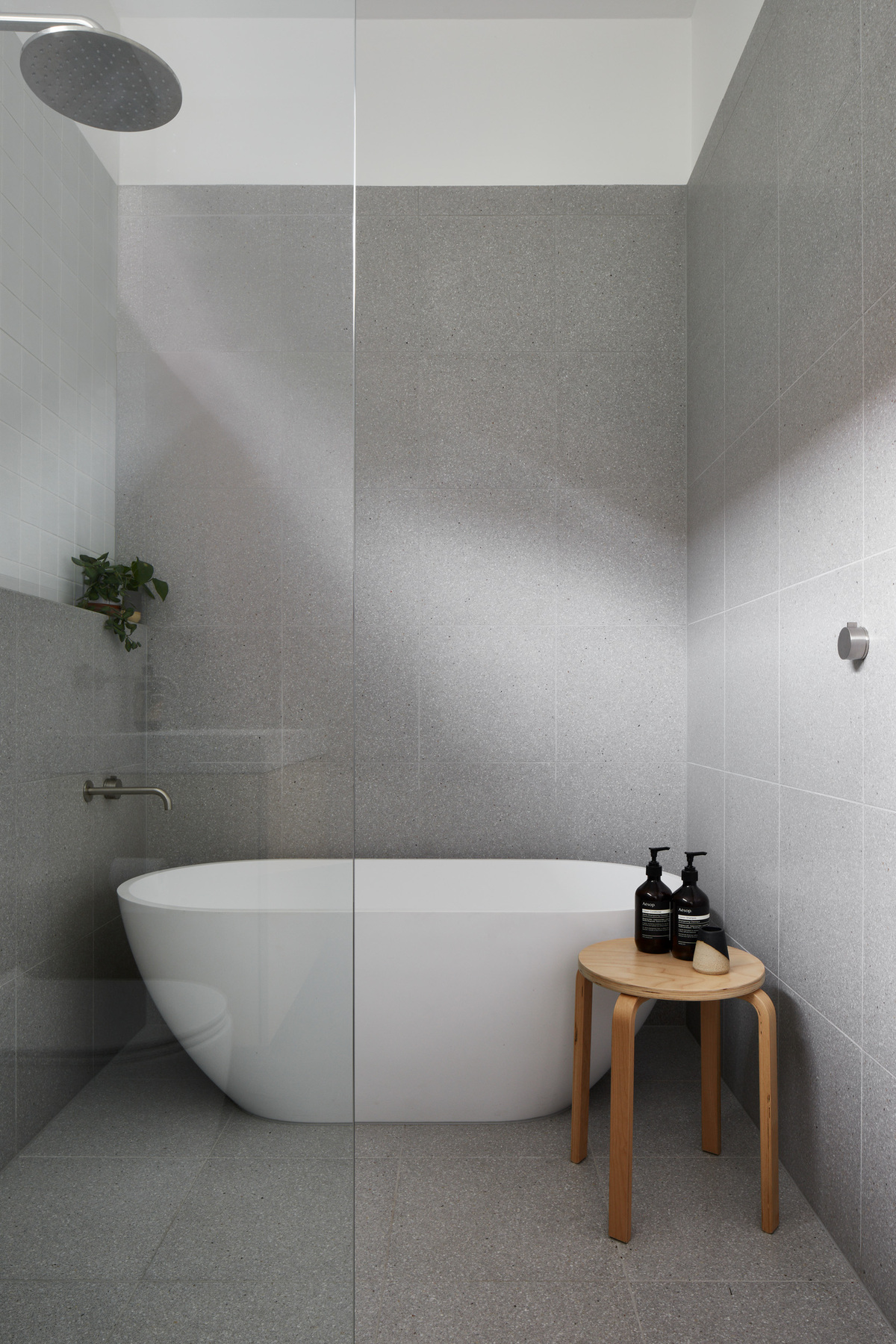 Minor works in the original home include updating the bathroom in its existing location and the creation of a new separate toilet and a work from home space which can be closed off from the other rooms when required were also created in the space where the dining nook once was. The existing lounge space, separate from the kitchen and dining area, remains as the owners enjoy having a separate, more cosy space to retire to. 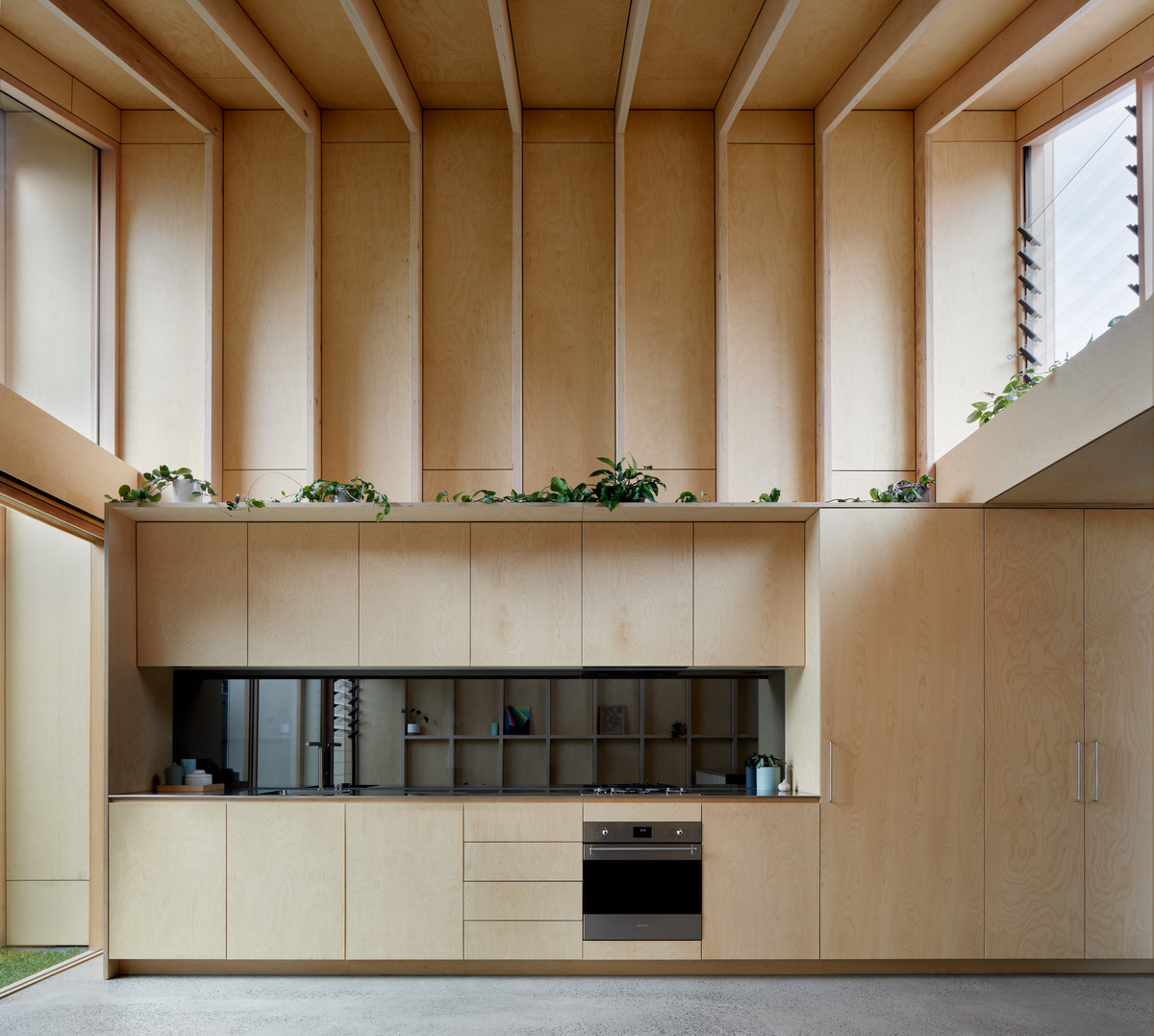 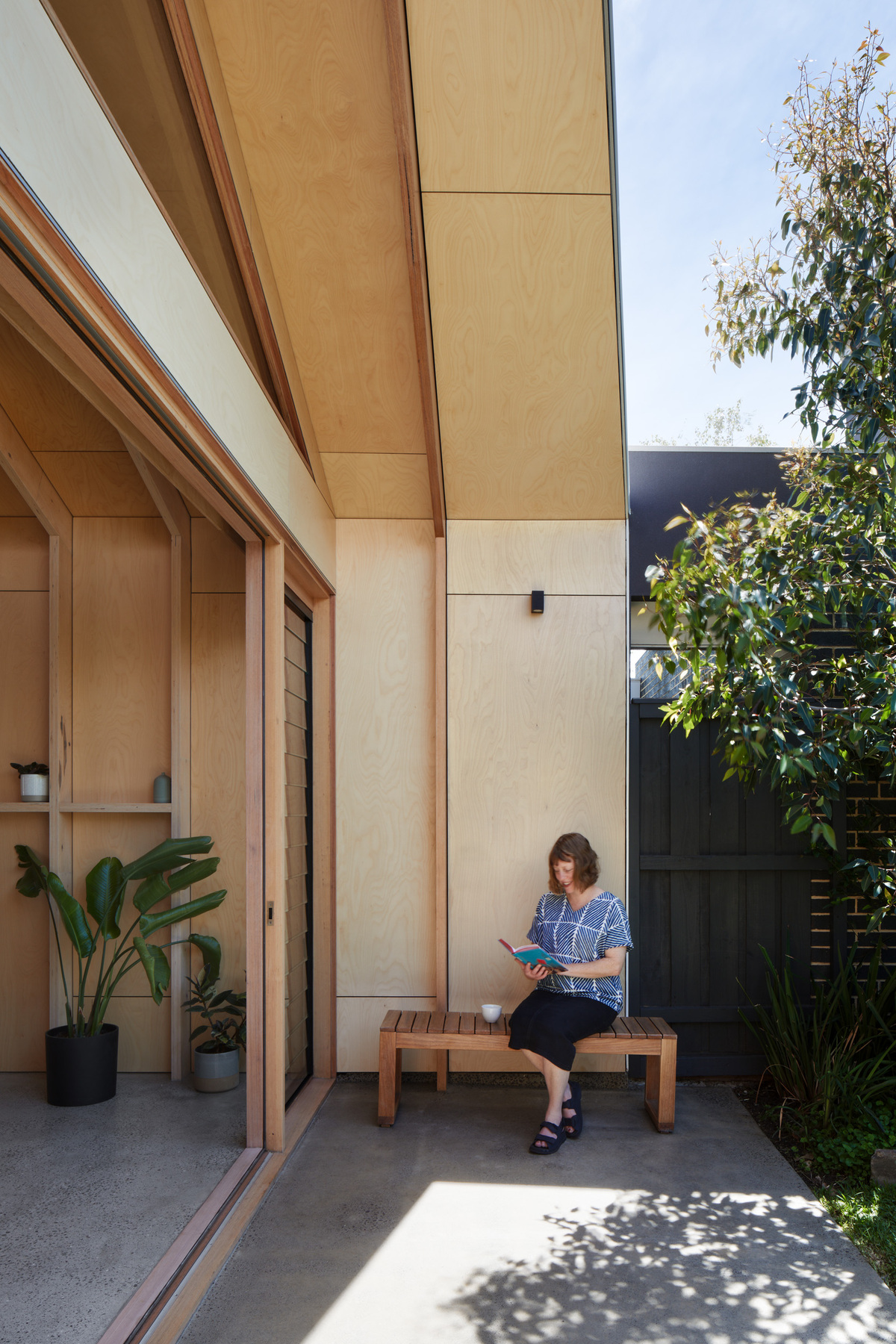 The new kitchen and dining space has a raked ceiling towards the east is designed to draw in natural light from the north and views of the garden without overshadowing the neighbours' garden spaces. The raked ceiling creates a dramatic sense of space in the one-room addition, helping it to feel larger than it actually is. "The timber structure is expressed and accentuates the dramatic raked ceiling", explains the architect. A high-level window to the south follows the roofline and mirrors the triangular-shaped clerestory window to the north and captures a glimpse of the tiled roof of the original home. A louvred section also allows for cross-ventilation to keep the home cooler in the summer months. 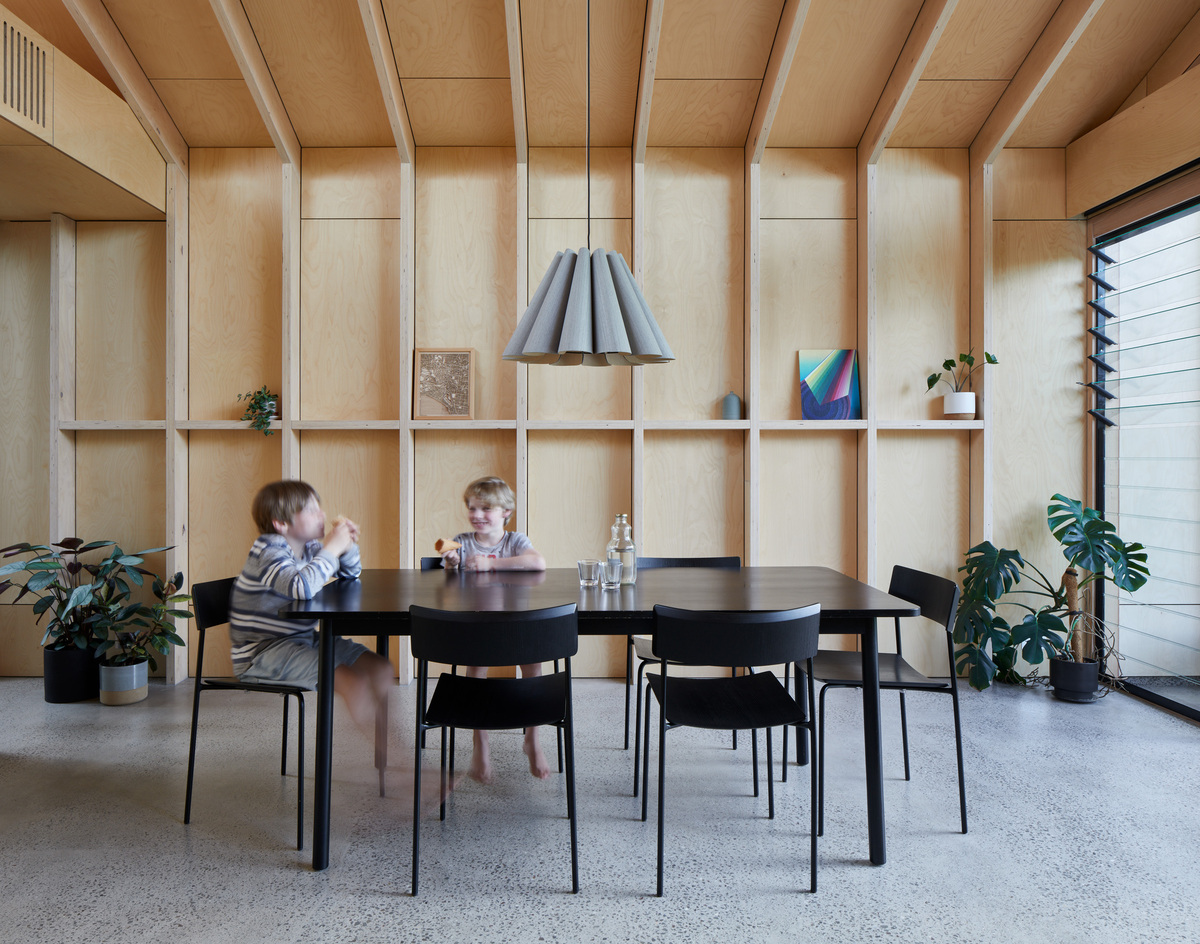 Clad entirely in plywood, the interior of the new addition is a complete contrast to the white and ornate interior of the original rooms and provides a warm, honey-toned glow which is beautifully contrasted with the cool greens of the garden. 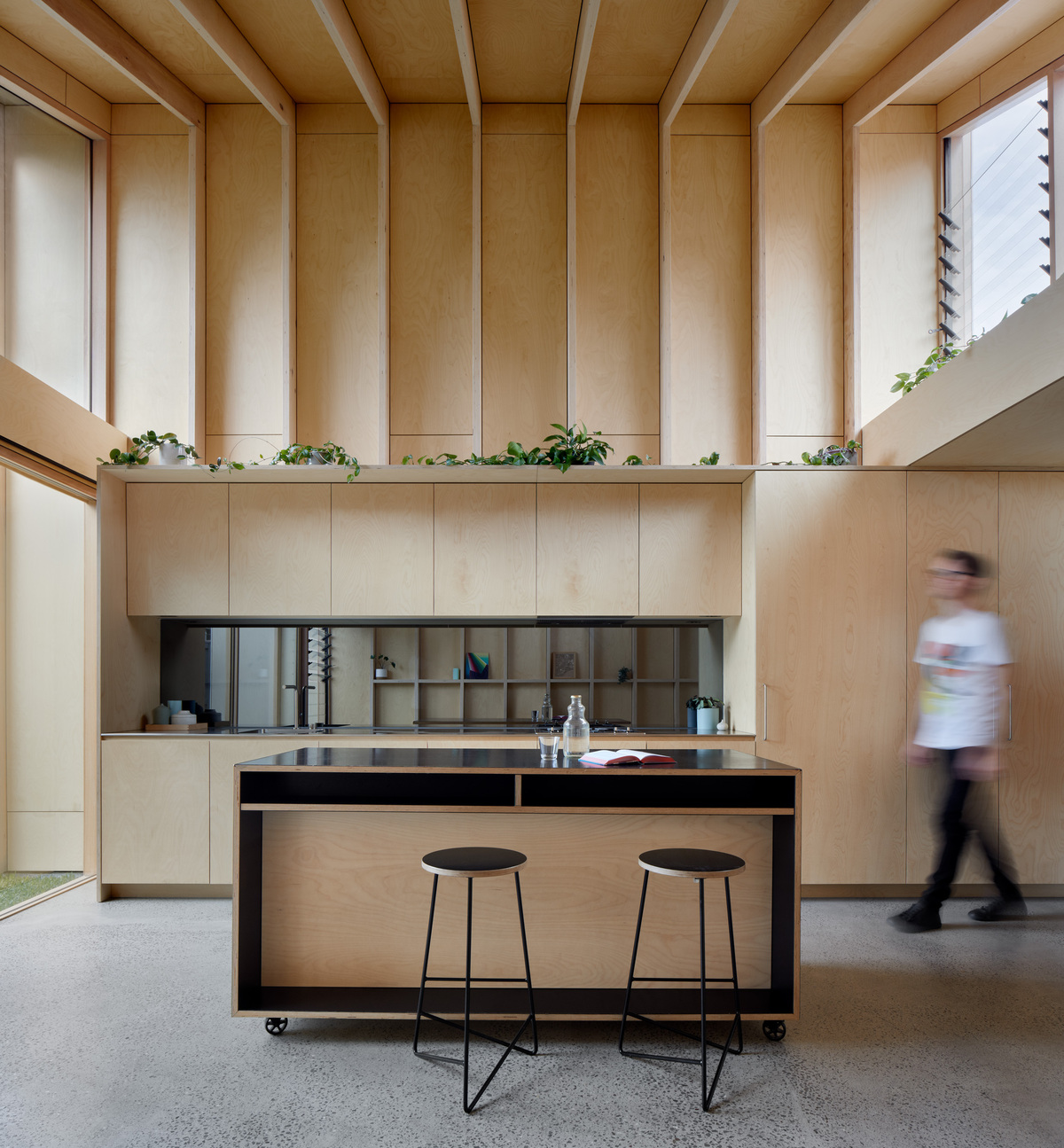 A wall of plywood joinery contains the kitchen, a European-style laundry as well as general storage. The kitchen feels minimal and neat with the fridge and pantry also hidden behind full-height doors. For a family who loves to cook, entertain and relax together, the new kitchen is the perfect place to gather without feeling cramped. The island bench is on castors for maximum flexibility; they can always slide it away to open the space up entirely. Similarly, the design allows the family and guests to spill into the backyard via a large sliding glass door, giving them a much larger space to entertain. 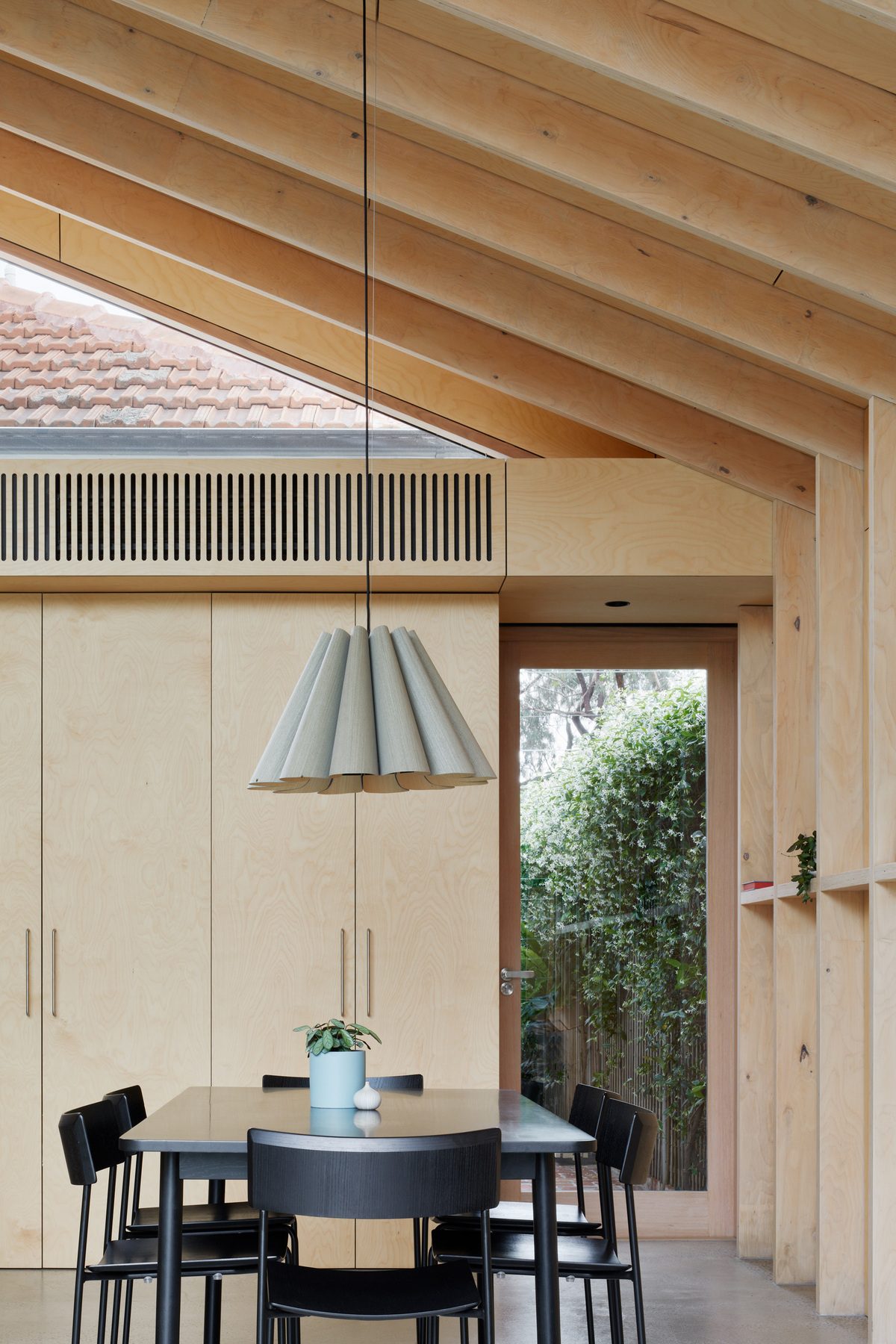 "The reworking of the rear portion of the original house includes a large family bathroom set within the footprint of the existing bathroom and laundry rooms, minimizing plumbing work and structural changes to the original brickwork walls. An internal nook once housing the small dining room has been reworked to include an additional powder room and a WFH study space with openable skylight. The original fireplace is retained in the corner bringing some of the original period character to the now stripped back, clean space. A large sliding panel door conceals or reveals the study area allowing for separation when required." - Sarah Kahn Architect 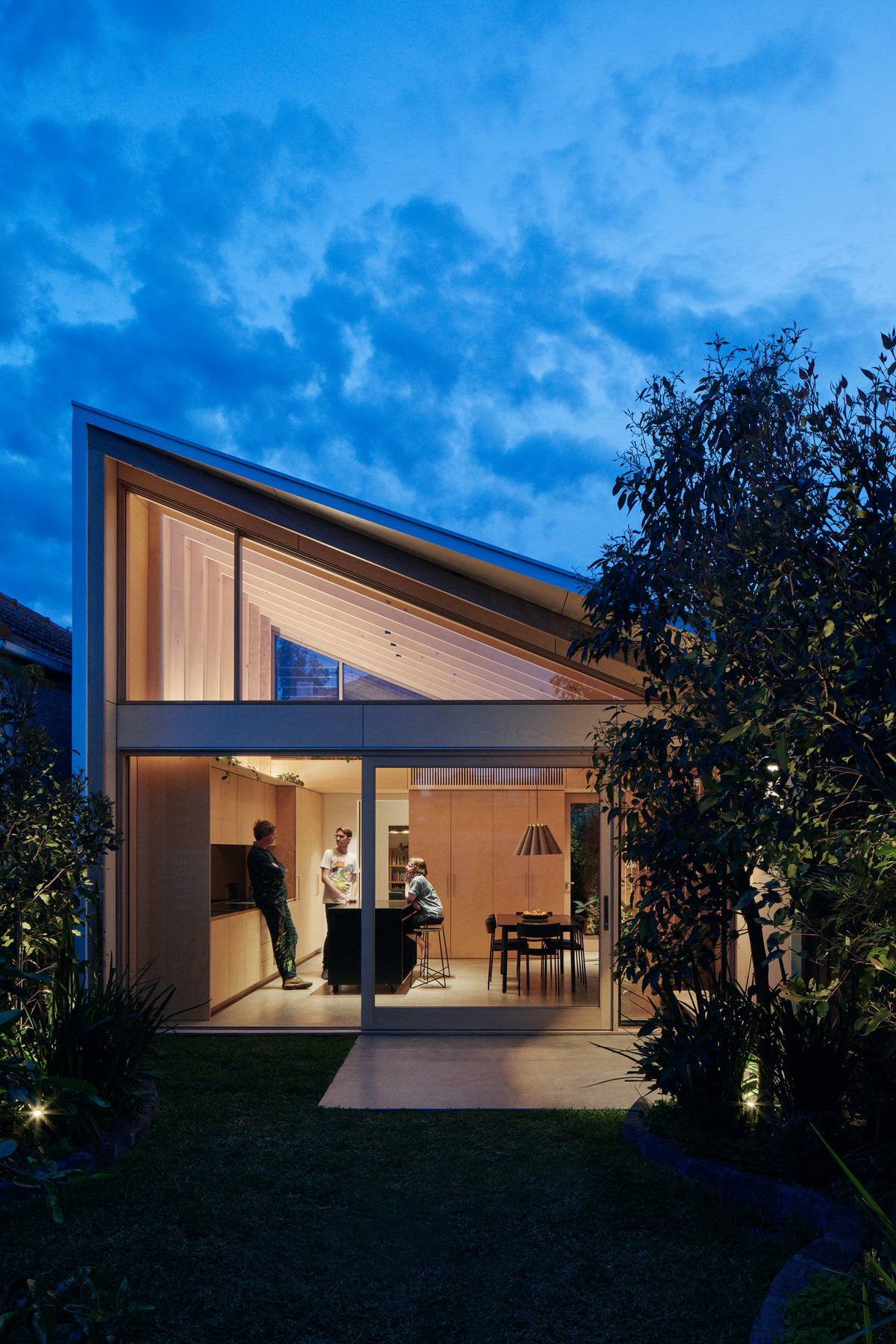 This addition is the perfect solution to this family's needs. Rather than demolish and completely rebuild the rear of the home, they were able to slightly tweak what they already had and, instead, put their energy and budget towards a truly remarkable one-room addition that fulfils all of their wishes. The warm and inviting pavilion uses the home's natural assets, its northern orientation and bushy native garden, to the full. 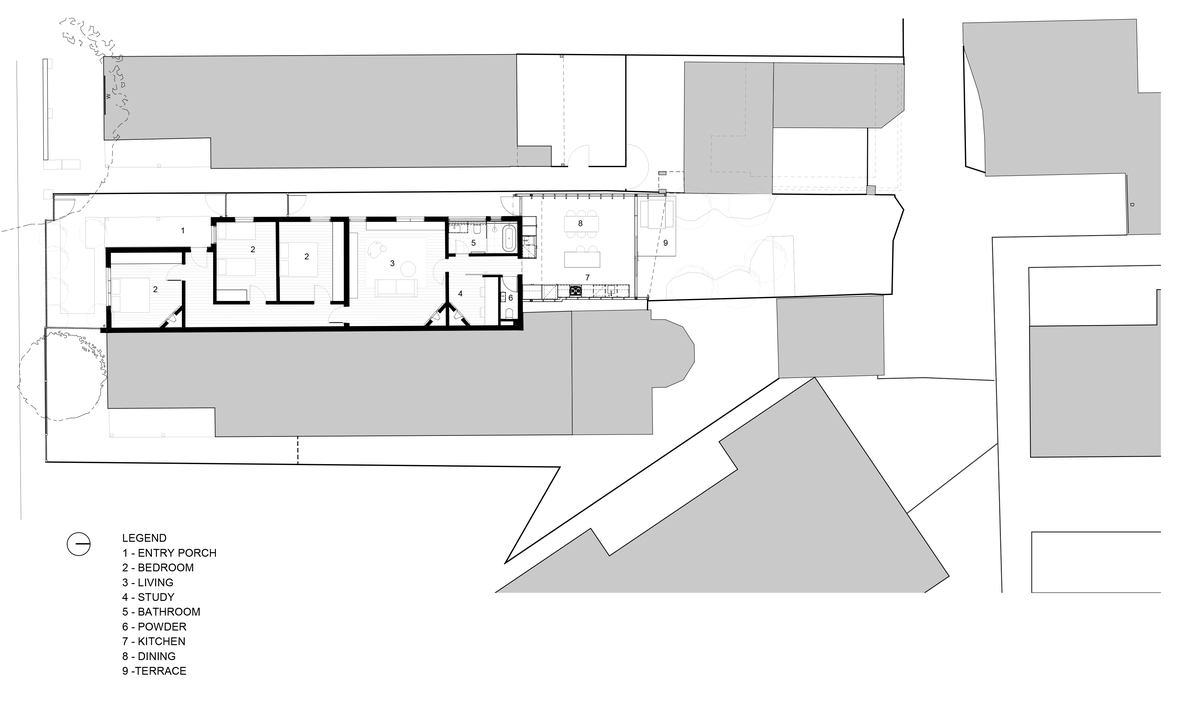