Brunswick House: A New Perspective in an Eclectic Neighborhood

Inner Melbourne heritage controls dictate the two front rooms (usually bedrooms) must stay intact -- even is eclectic suburbs like Brunswick where there's a mix of Edwardian, Post-War and Modern housing. This has the benefit of maintaining an historical streetscape, but it can also lead to oversized rear extensions encroaching on backyard space.

Brunswick House's architect, Christopher Botterill, has shown restraint. His modest but space-efficient extension is the perfect scale for its site. It provides the necessary spaces for modern living without crowding the backyard. Plus, surprising spaces like a rooftop terrace give the home a new perspective on its eclectic neighborhood. 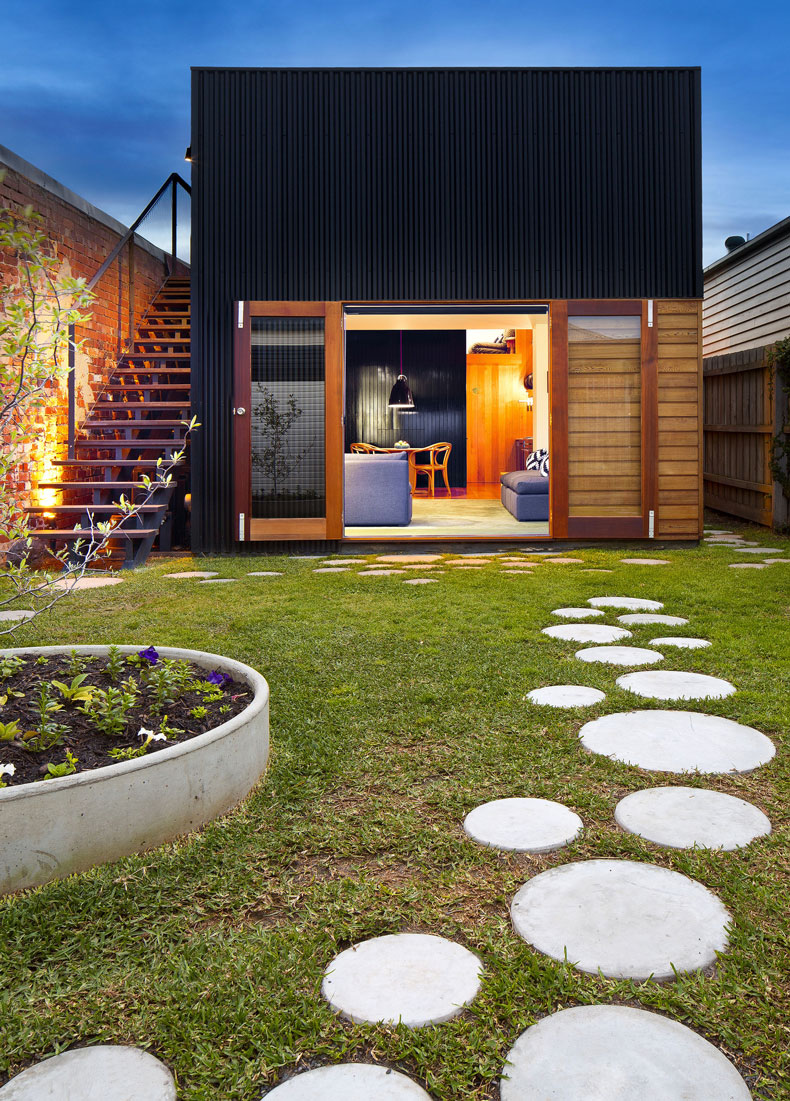 The original house (which was a derelict shell when the owners bought it) has been left largely intact. This was a decision based on heritage and sustainability grounds. Just a small, one and a half storey black box has been added to the existing footprint of the house. This retains plenty of room in the backyard where circular stepping stones and pipe planters are a fun way to indicate the use of the space.

A water tank hidden under the stairs collects water for reuse in the garden and new materials for the project were locally sourced and manually finished. Even from a sustainability perspective, this project was minimal impact. 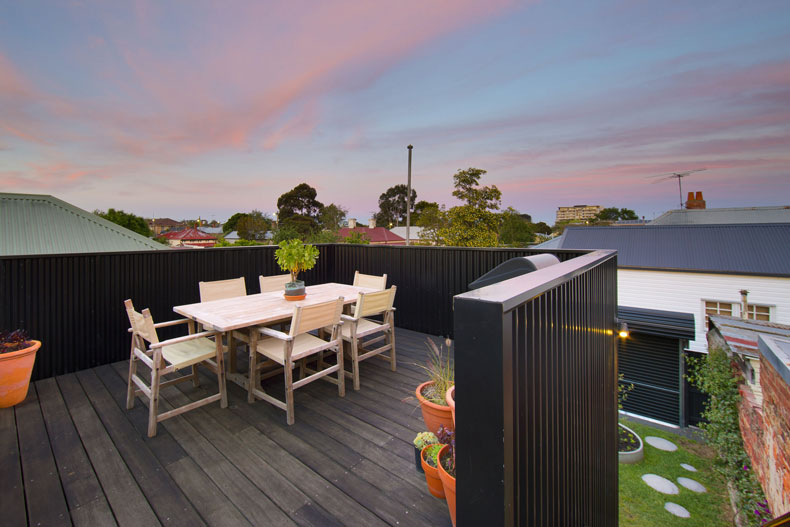 Finding space for an outdoor dining area on top of the living area was a master stroke for this project. The rooftop terrace provides views you don't often get in single-storey dominated Brunswick -- and the sight of suburban rooftops and established gumtrees is undeniably charming. 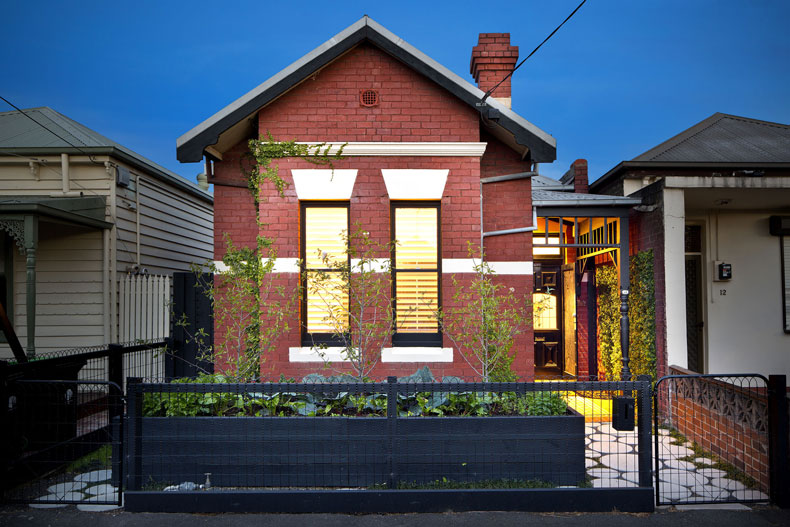 The traditional frontage for the house has been retained, but that hasn't hindered the addition of an organic vegetable garden and the continuation of the circular stepping stones -- modern touches to the historic building.

Having a vegetable garden in the front yard is a very common feature in this inner-city suburb, where Greek and Italian immigrants have been tending their own market gardens for years. 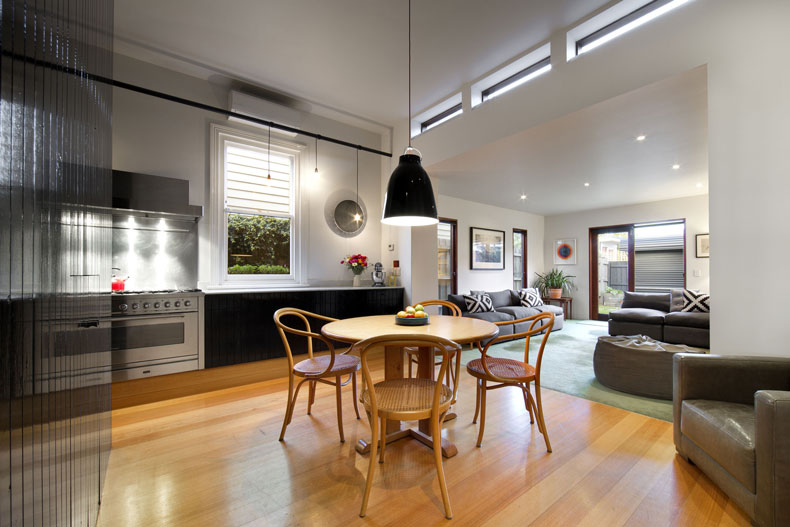 The space is simply planned. A galley kitchen, dining and lounge make up the new open-planned living area. A bathroom has been placed close to the bedrooms to free up the remaining space. 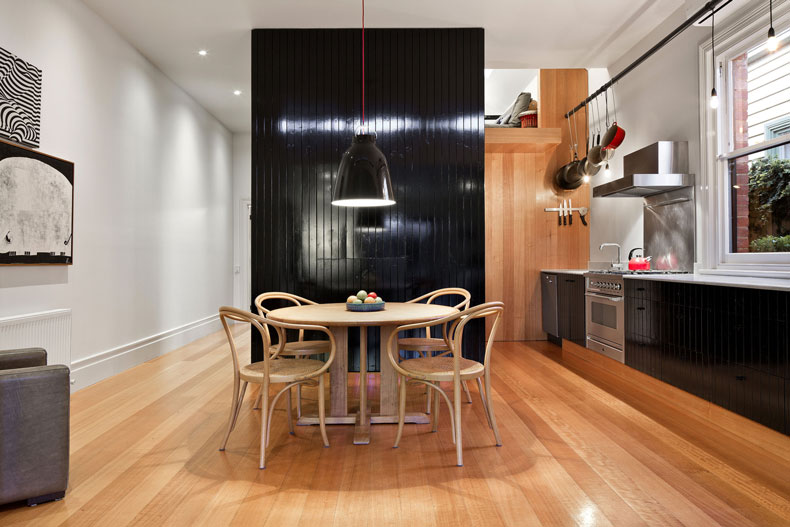 Secrets of the Black Box

That black box is hiding the old fireplace. The fireplace has been retained and is now being used for structural support. It also conceals a pantry and wine cellar for the kitchen -- now there's a good use of an old cumbersome fireplace. 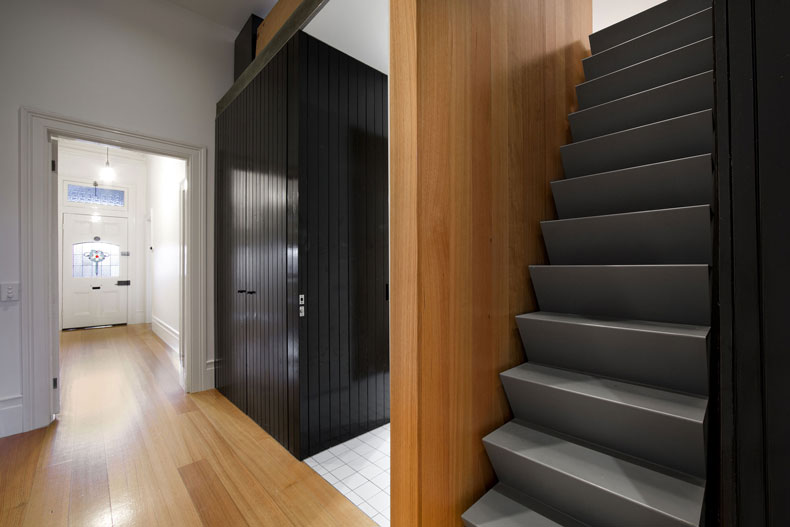 A lot of space can be wasted in high pitched roofs. Here the architect has taken advantage of lower ceiling height in the bathroom and tucked in a study/spare bedroom. This space is open to the kitchen and living area below, making both spaces feel larger. The mezzanine level also provides access to a storage space in the roof. 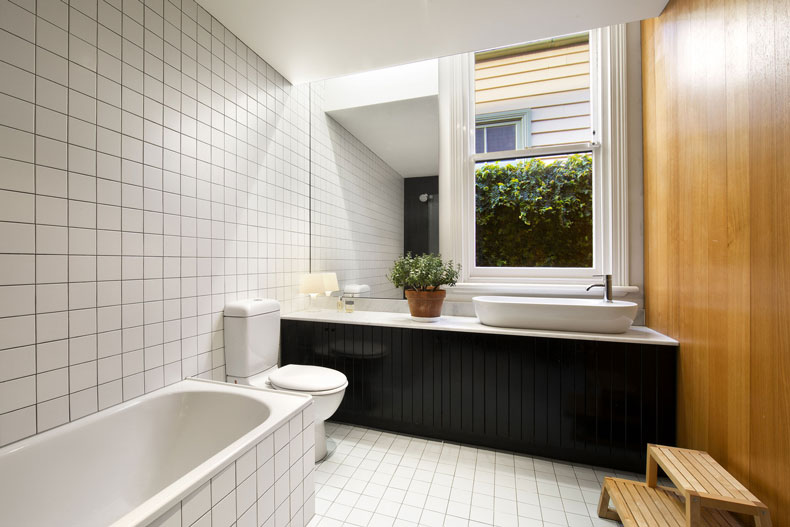 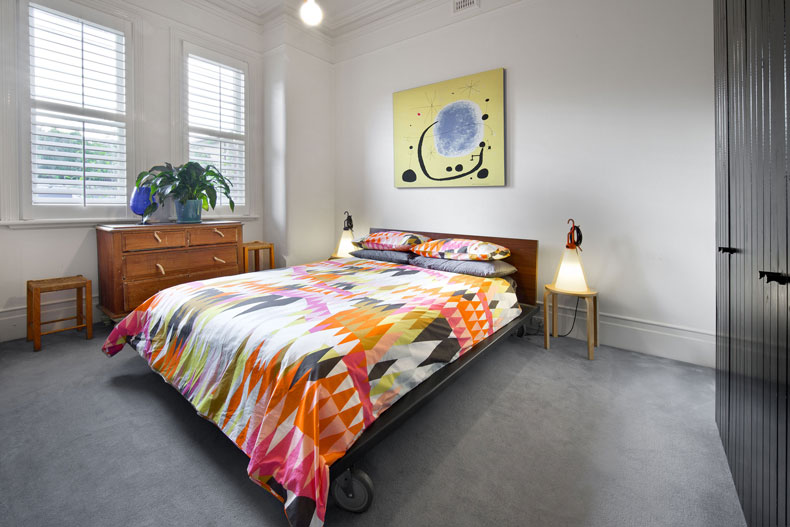 This house isn't bloated or bragging. It is efficient and humble. Brunswick House is a great example of how a simple rearrangement of space can pay great dividends in terms of livability.

Some simple tricks in this project like the mezzanine study and the rooftop terrace have created exciting new perspectives in spaces that might have otherwise been wasted.

The extension itself is restrained and minimal -- but the improvement is far from minimal.