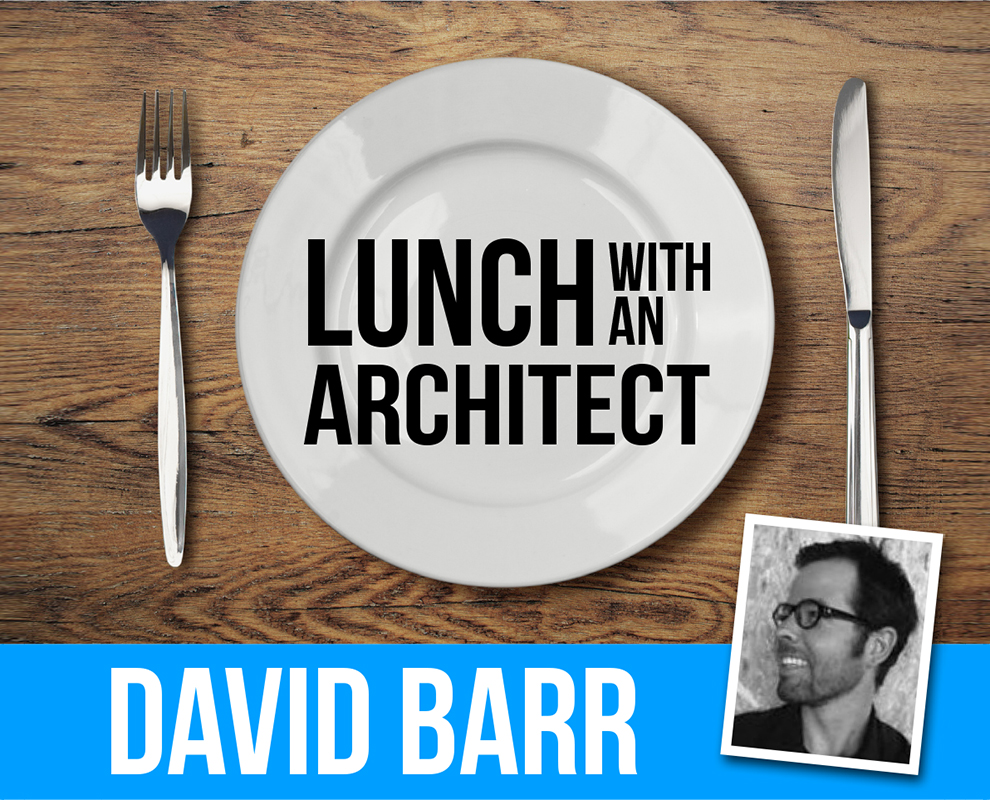 Brodie: You're based in Fremantle, Western Australia. I'm ashamed to admit that my only experience of WA is an hour stop over in Perth Airport. It was a lovely airport, but I'm not sure it gave me much insight into Western Australia! What do you love about Fremantle and Western Australia in general?

David: Western Australia is my place of birth - Perth specifically. The beauty of Western Australia is it has this amazing coastline - so it becomes a bit of a beachside state and city. The weather over here is incredible. The amount of light we have is amazing. And also how much space we have - we have an abundance of space. So that's the geography of the place. 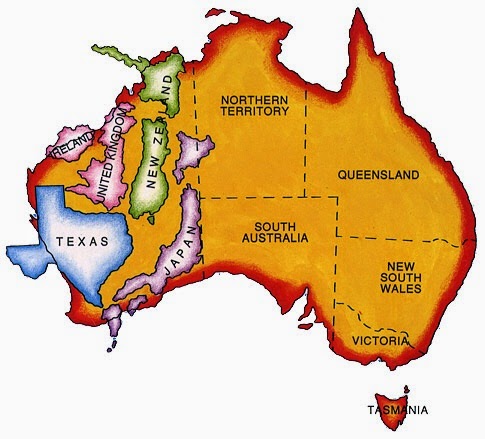 Abundance of Space: Literally bigger than Texas (much bigger). This image came to mind as David talked about the abundance of space. Western Australia is 2.646 million km² and has a population of 2.589 million (Sep 2014). So there's just under a square kilometre for every citizen. Perfect for the introverts amongst us.
Image Source: Margaret Muir

Three or four layers of isolation?

Yeah, there's three or four layers of isolation! But with that isolation comes this amazing opportunity. I think there's opportunity in business, being an architect. It's still quite an infant city, growing and trying to find itself. Whereas Melbourne and Sydney are quite established and quite dense cities, I think Perth has a lot of catching up to do. So being part of that process is really quite exciting.

The other thing about living and working in Fremantle is it has this amazing heritage that has been maintained. It's also a port city at the mouth of the Swan River. The buildings that I've been working on, through alterations and additions - even just walking through the streets, they're 19th Century buildings. It's amazing to still be having this dialogue with these beautiful historical buildings. It ranges from war-time cottages, to more bespoke federation homes. There's this amazing mix of heritage and things to learn from. It's really great.

That's what I love about being in WA and in Fremantle, the unique qualities it has. 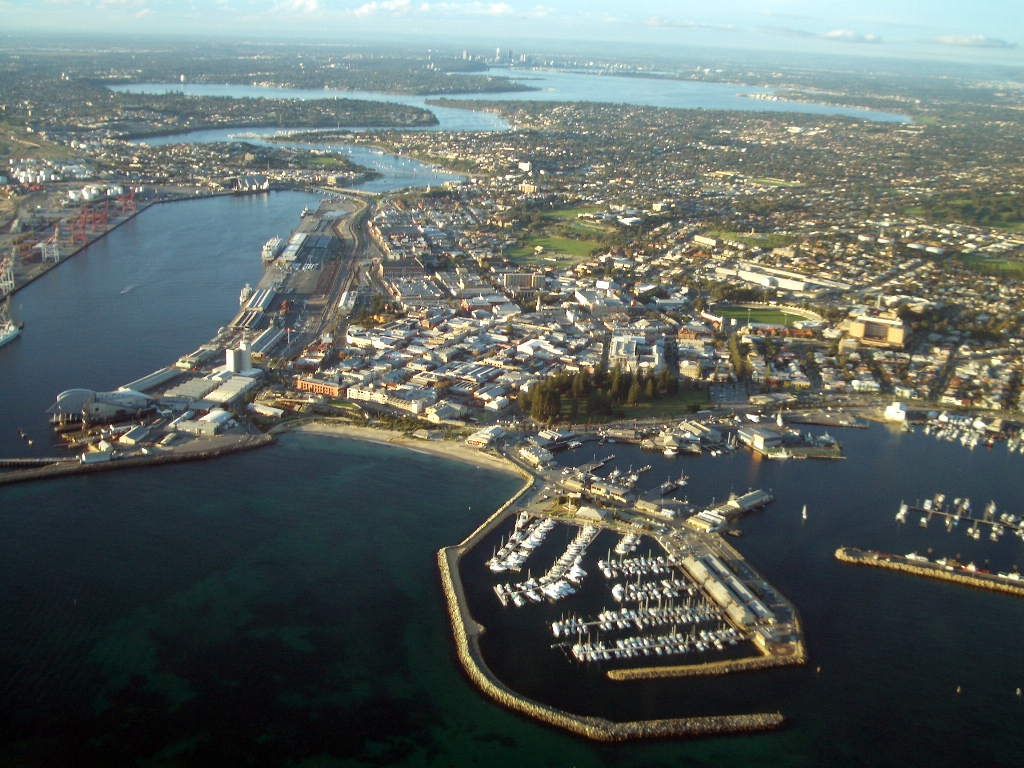 What I'm missing out on: Just a taste of the beauty Fremantle - and Western Australia - is full of (I'm told).
Image Source: Wikipedia

This interview series is called Lunch with an Architect. Unfortunately we're going to have to have a virtual lunch today, but where's your favourite lunch spot and what's your favourite dish on the menu?

I live on a road called Lefroy Road. The place I often frequent is called Little Lefroy's at the end of the street I live on. It's a very small cafe - 40 square metres. Amazing food. My favourite lunch is the Halloumi Burger.

It's very good. It's actually mushroom and Halloumi in a burger.

Yeah, an extended office. You need them! 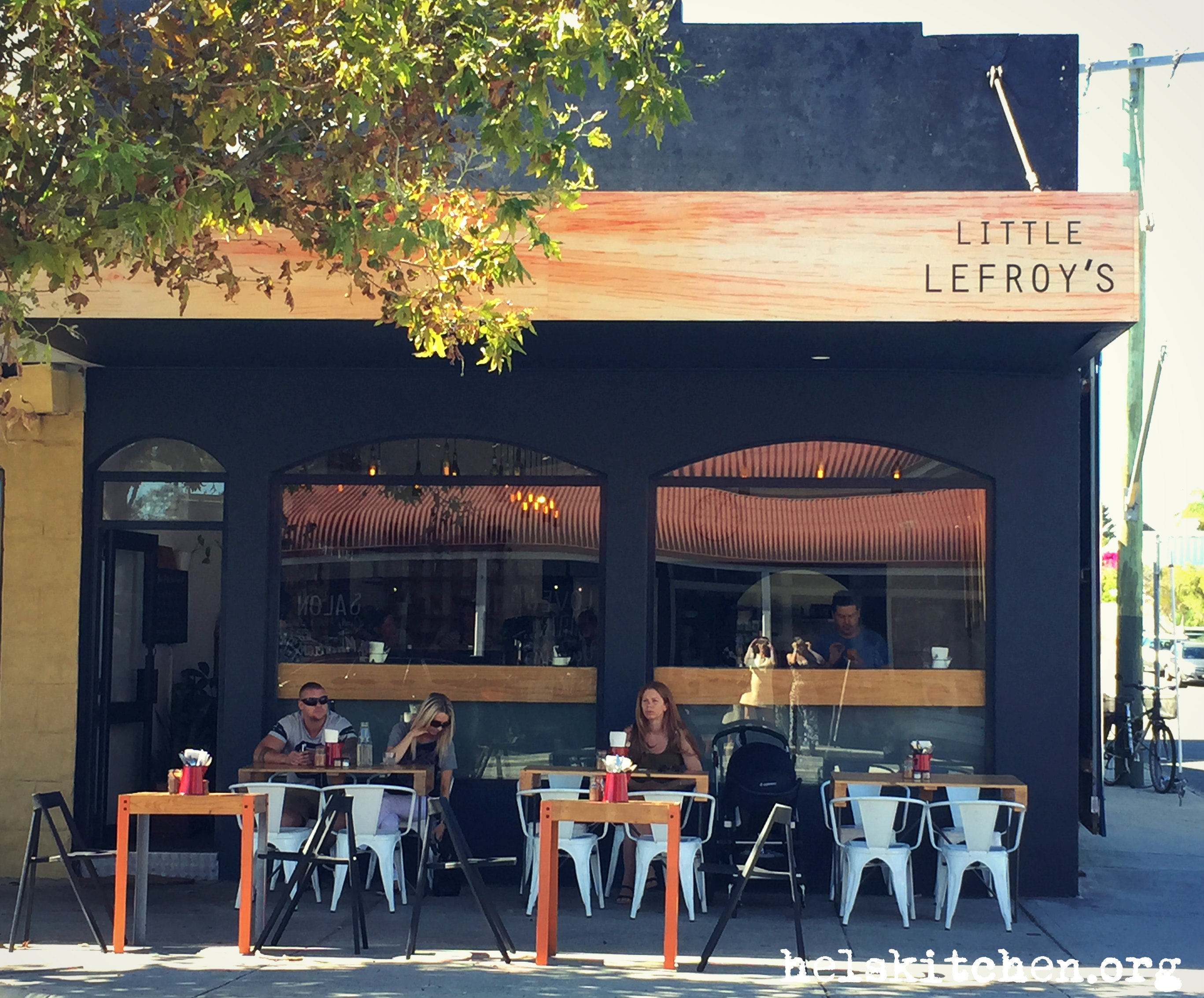 Cafe Culture: Little Lefroy's is David's lunch spot of choice (it helps that it's just at the end of the road). Try the Halloumi Burger - I hear it's fantastic!
Image Source: Helskitchen

It's quite a European thing, I think, spending extended periods sitting in a cafe - working or otherwise. I know you worked in Barcelona for a while, are there any lessons you've brought back from Europe? And other than their cafe culture, what can Australia learn from our European friends?

Yeah, spending time in Barcelona - or Europe generally - does reinforce how much establishment there has been over generations and generations. So again, Perth is quite infant in its growth. I think Fremantle's colonial period and built history started in 1829 - the indigenous community was obviously around thousands of years before then. So there's a lot to learn [from Europe].

At the architectural practice I worked for, Flores Prats which was sort of an off-shoot from Enric Miralles, it's their discipline and their rigour. It was just phenomenal they just lived and breathed it every day. They would often do two 5 hour sessions. Five hours in the morning, two hours for the siesta and then another five hours. They always broke the day into two - so there's almost 600 days in the year!

The other thing that's incredible [in Europe] is the craftsmanship of the actual built form. Everything was detailed incredibly well, from the street furniture, to bins, every building, signs, everything. It's just incredible that the design aspect carried through everything. They pride themselves on that, and I think that's something we can certainly learn from - to not necessarily standardise a lot of things. To try and be more craft-like and bespoke.

I can see that sense of craftsmanship and emphasis on design in your work. In the past we've featured your project Suburban Beach House. It's one of the most popular projects on Lunchbox Architect, not that I have any trouble understanding why - it's also one of my favourite projects! How does Suburban Beach House differ from a traditional suburban house and why? 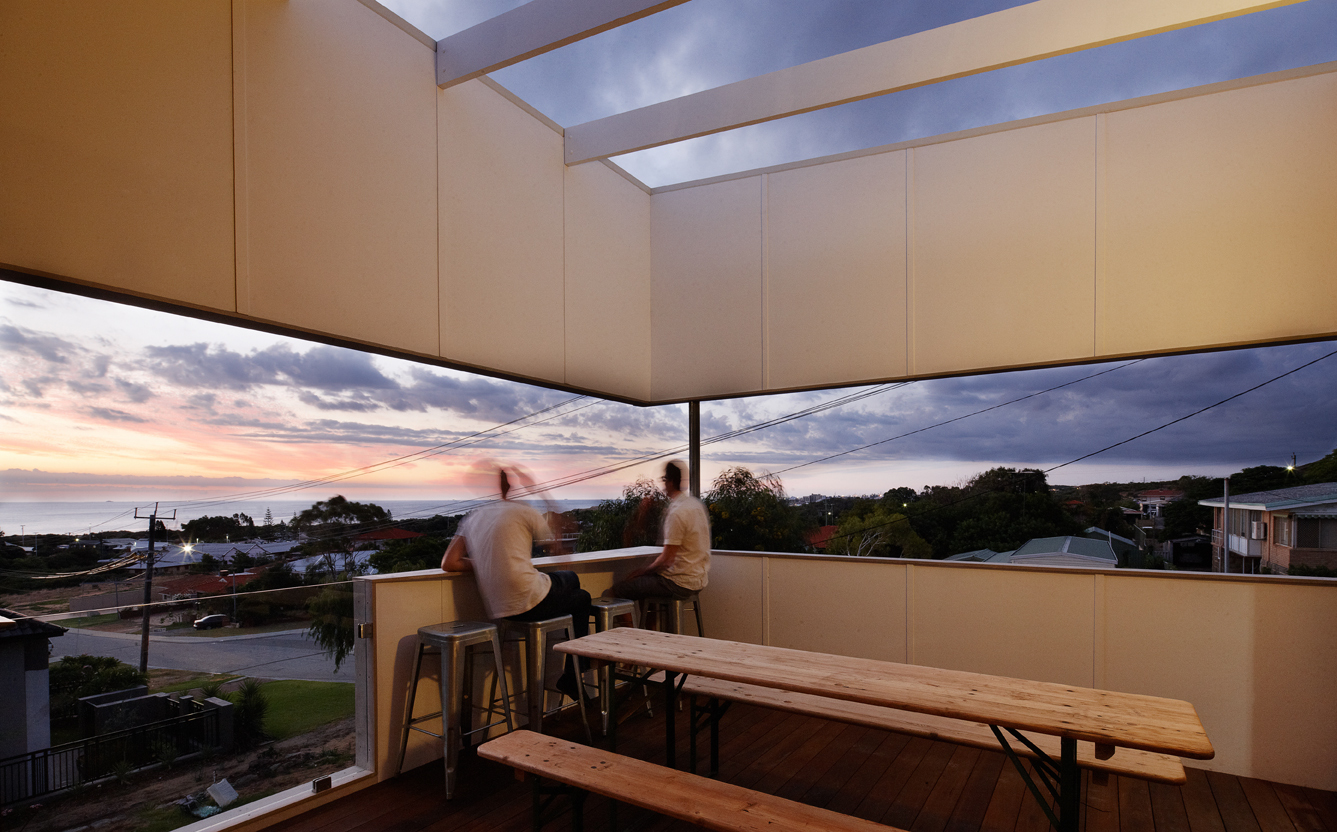 Well, I think the beauty of this house came in its site. Both its immediate site, but also its broader context. It was in Coogee, which is a beachside suburb. It's actually on Beach Road, which is why it's called Suburban Beach House. It was a permanent house for the occupants, so it wasn't a beach house as such.

The beauty of it was the site had a two metre fall down the long length of it. When we did initial testing, we thought it might just be soil, and we thought, 'Ok, let's try and keep that height difference'. And it becomes this beautiful stepping, or the ability to then elevate the building to — capture views, but also to have this beautiful terrain sliding underneath. As construction occurred, we realised it was this beautiful limestone, and we ended up revealing the limestone. The limestone then became this beautiful, natural retaining wall. And typically what happens - especially over here in Perth - you get these big developments they just tabula rasa everything is cleaned away. And they do this series of big limestone wall terracing. And everything is flat.

So our resistance was, let's not make it flat, let's deal with the natural terrain. Then elevated building so we can capture the view. And then let's not put a fence on the front to create an enclosure, we said, let's just make in natural vegetation that's coastal and local to the area, and have that spilling into and under the house. 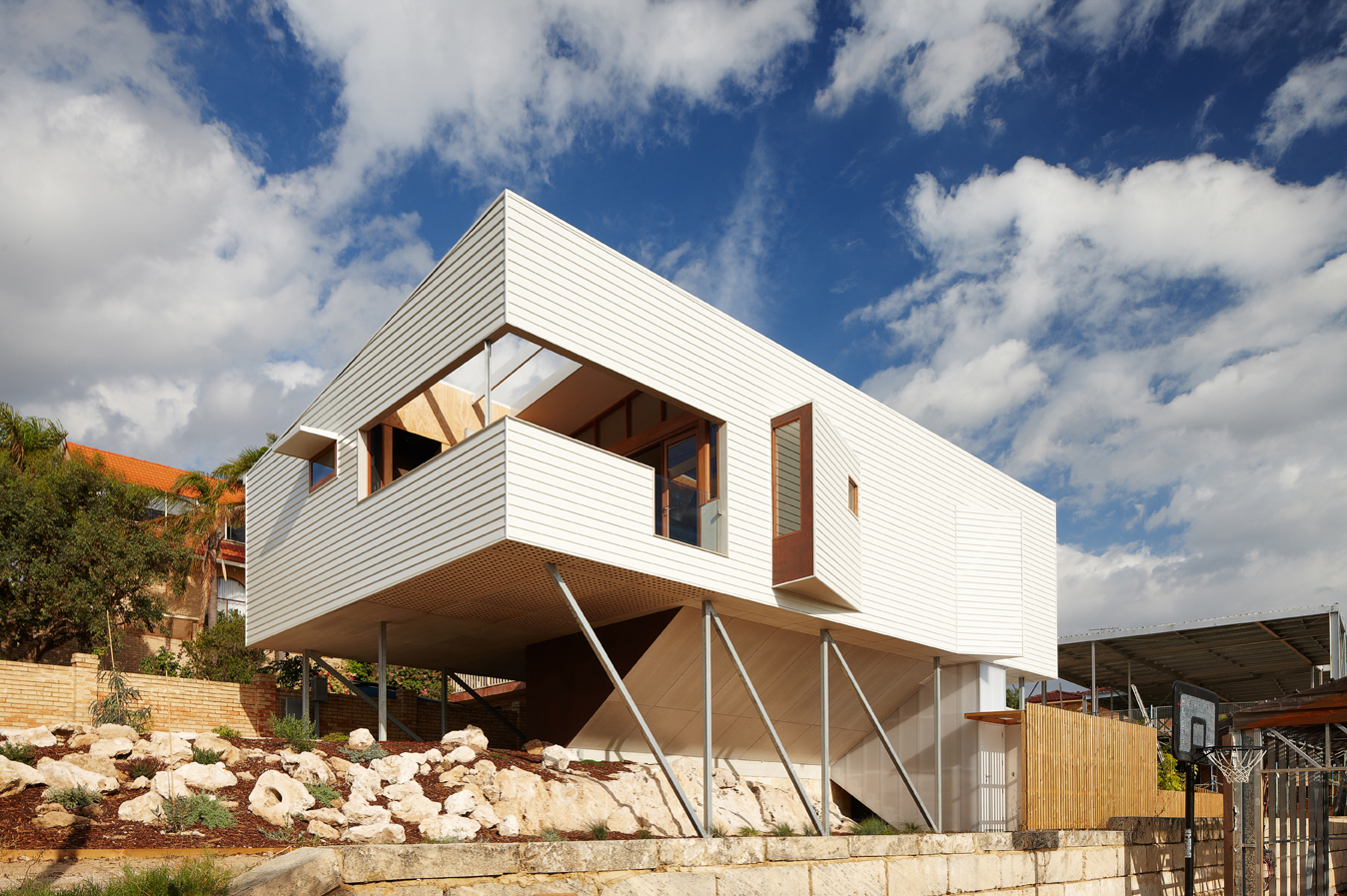 Capturing Breezes: Suburban Beach House is raised off the sloping site much like a traditional Queenslander to capture breezes as well as the views.

There's not fence. It's sort of anti-typical of housing developments. Suddenly it becomes those things of being playful and fun. Even playing with the weatherboard. There were a number of these shacks in the area which are sadly being demolished. It used to be much more like a coastal beach suburb where people would go down for a holiday. There were these fibro shacks. But they're all disappearing and we're starting to see these two storey McMansions. They're over-scaled [compared to Suburban Beach House] as well.

So this is a 140-150 square metre home - three bedroom, two bathroom with a flexible room underneath. And it contains everything they need. They've got their swimming pool out the front (the beach), a park around the corner. So it's about small and well-positioned and utilising the surrounding amenities and recreation facilities. 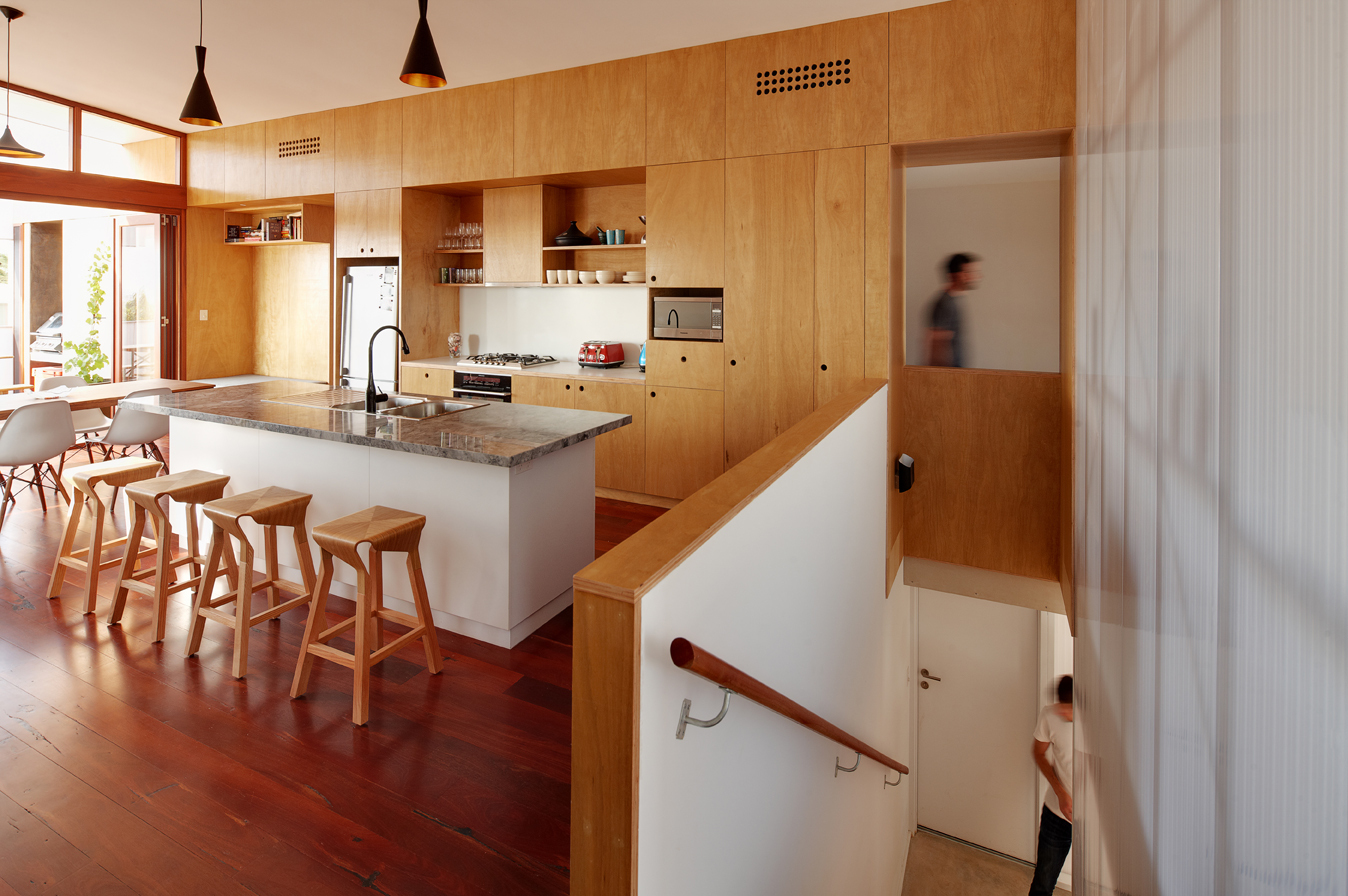 Laid-back Interior: A laid-back beachy interior at Suburban Beach House is more like a beach house than anything you'd find in the suburbs.

One consistent element I see in your work is attention to and manipulation of light. Can you tell us what makes light so important in a home and what you do to make the most of it?

I guess being Western Australia, we have a huge amount of light. It's actually an incredibly intense and strong light. So part of playing with the light is filtering it and manipulating it to soften it from the outside-in, but there's also a quality of transforming a volume internally, which becomes a really beautiful thing from day to day, because the light is always changing - the way that deals with the outside, with trees, with cloud cover and things like that. So light's constantly changing. If we can bring that inside through some degree of manipulation - through a light scoop, or filtered through battens, it suddenly creates an internal atmosphere that becomes ever-evolving and changing every day. So, for us it's about that liveability aspect of an evolving internal space. 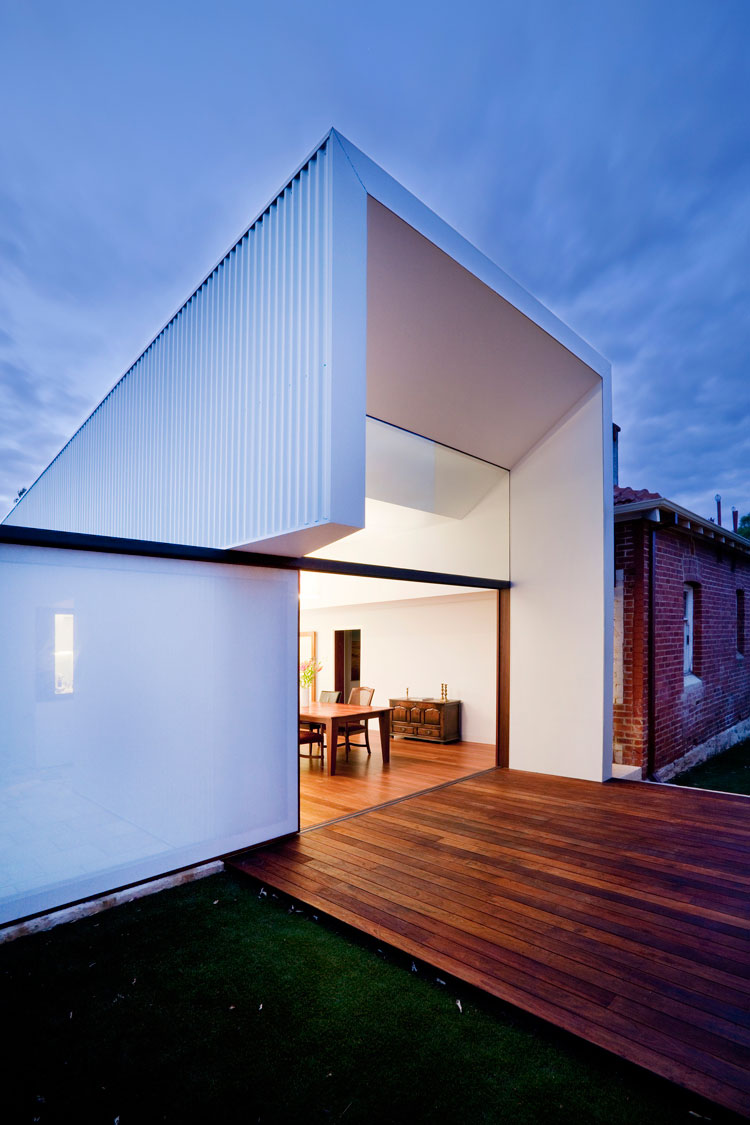 Light Scoop: Westbury Crescent Residence has a series of unique light scoops which diffuse and distribute WA's intense light into the right places.

Your work also tackles issues of sustainability and affordability. Tell us about the design strategies you use to keep costs down and minimise the impact to the environment in your projects.

This is a constant challenge that we're trying to achieve because, you know, if anyone had the answers to it, we wouldn't have the problems we face.

It is certainly something that we strive for passionately - how we can contribute to both of these key aspects. I think there are some general fundamentals of building orientation. So getting what should be absolutely standard is getting climatic response right. So in our case, getting the Northern light and minimising East and West apertures and getting cross-ventilation through the site or through the building. They're things that you can do very easily through smart planning. The other thing is to create smaller footprints of built form.

So using the example of Suburban Beach House it's saying, you don't need the average Australian home of 250 square metres, you can be smaller and more economical, but still functional, still feeling large by playing with the perception of space by borrowing from adjoining rooms. Smaller footprints is a huge one. It's where you can save a huge amount of money to deal with affordability.

Another one is to use pre-finished materials, so materials that don't require a lot of maintenance long-term. Once they're put up, they're finished and they don't require painting as well. For us, with Gen Y and Suburban Beach House projects, they're actually metal clad (COLORBOND® steel). It means the construction time and maintenance is dropped which contributes to cost savings. And the colours that we selected contributes to sustainability. The white is quite reflective, so therefore reducing heat loads on the buildings. 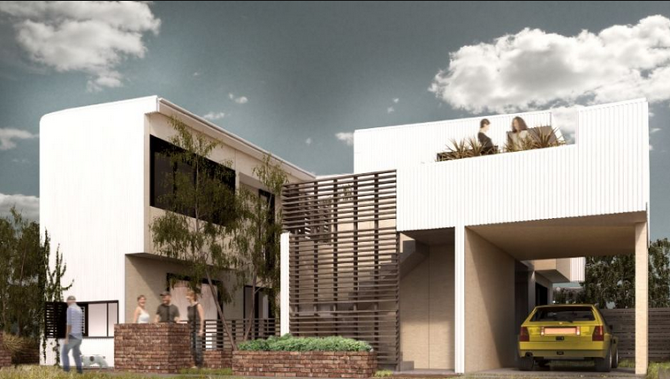 It's a range of these small things that incrementally contribute to reduced energy consumption, minimal maintenance and cost during construction that we hope deals with sustainability and affordability. As I said, it's an ongoing research project that we're constantly testing on every project, so on every project site there's this lineage of experience that we're gaining. We're trying to constantly hold on to architecture - we still want to be able to manipulate light and create these beautiful atmospheres for people to live in, whilst making it affordable, whilst dealing with sustainability. I think it's those things that we want to hold onto, so we're not just doing small shoeboxes that have no joy or life within them.

That balance is something you get right in every one of your projects and I applaud you for that. That's why I'm a big fan of David Barr Architects. Thanks for your time, David. I look forward to that Halloumi Burger when I finally make it to Fremantle!

Lunch with an Architect 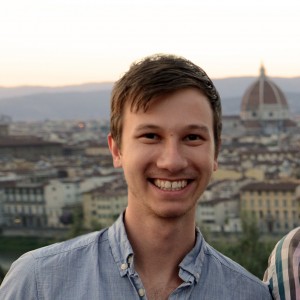