Happy Haus Arrives on a Truck Ready to Move Into

There's something uniquely exciting about the idea of craning your new, architecturally designed house off a truck, lowering it into place and then unwrapping it (like a giant Christmas gift) and stepping inside to explore -- ready to move in. 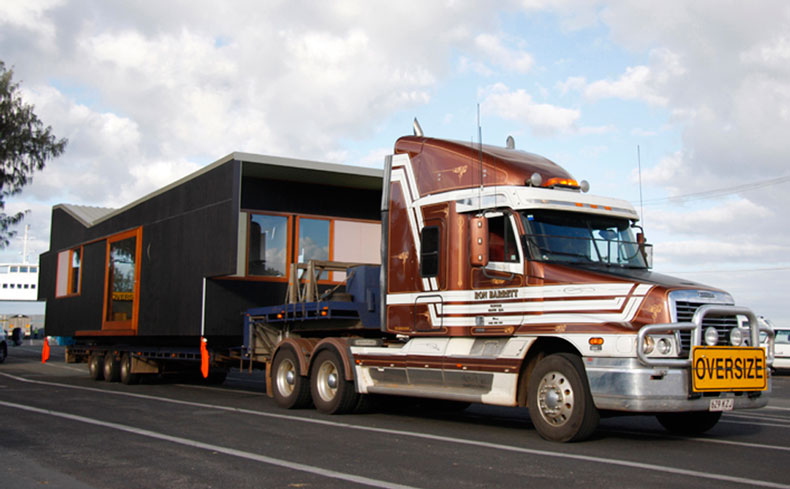 Of course, that's a reality if you choose to buy a prefabricated house. It's not a new idea -- variations of the prefab/kit home theme have been around for years. Even our well known 'Queenslander' style was originally developed as a way of adapting kit homes to Northern Australia's humid climate.

For various reasons, prefab homes have only experienced various waves of moderate popularity and have never taken off as a popular option.

One of those reasons is that prefab homes have often relied on innovations in couplings, materials, fixings, spanning systems, making their construction and maintenance expensive. Donovan Hill Architects attempt to address this common complaint in the prefabricated home market by developing Happy Haus. 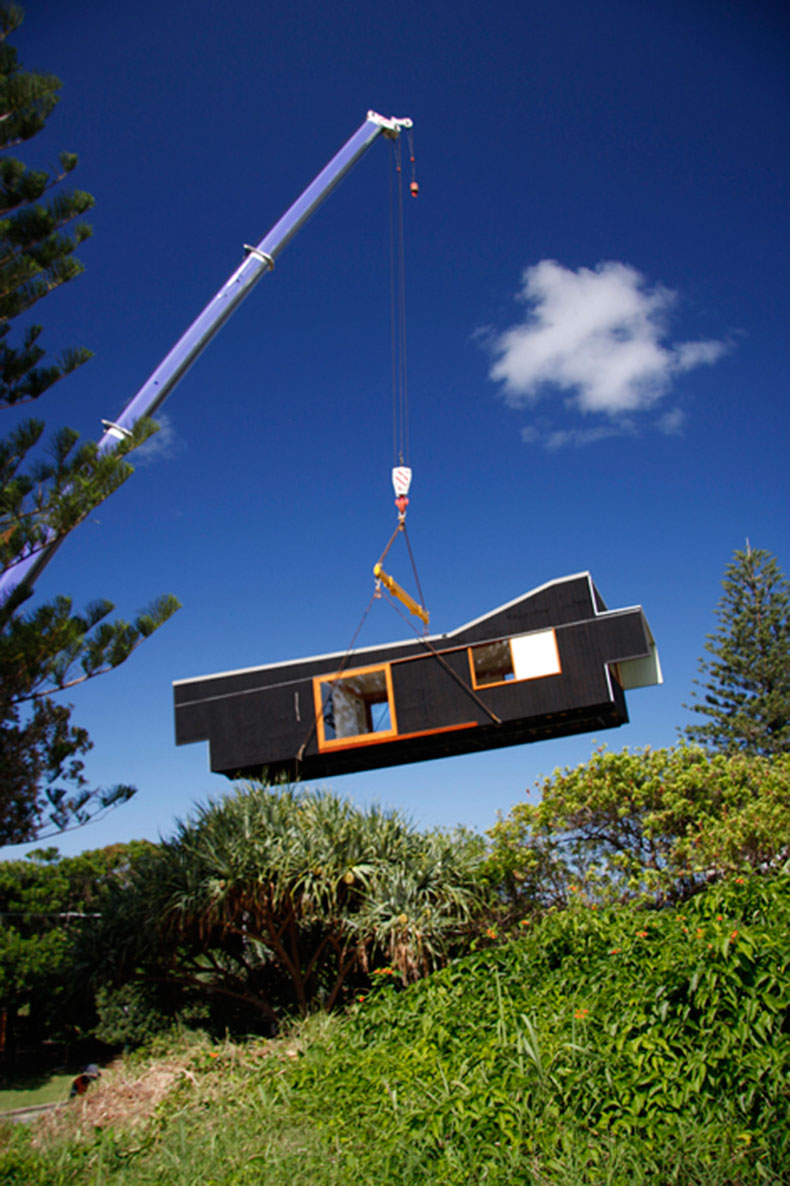 There's no trickery here, Happy Haus uses no nifty gadgets, just the same systems your average house is built from. This makes the houses easy to build and maintain. Perhaps with this straightforward approach to prefab houses, we might start seeing more houses being unwrapped like giant gifts! 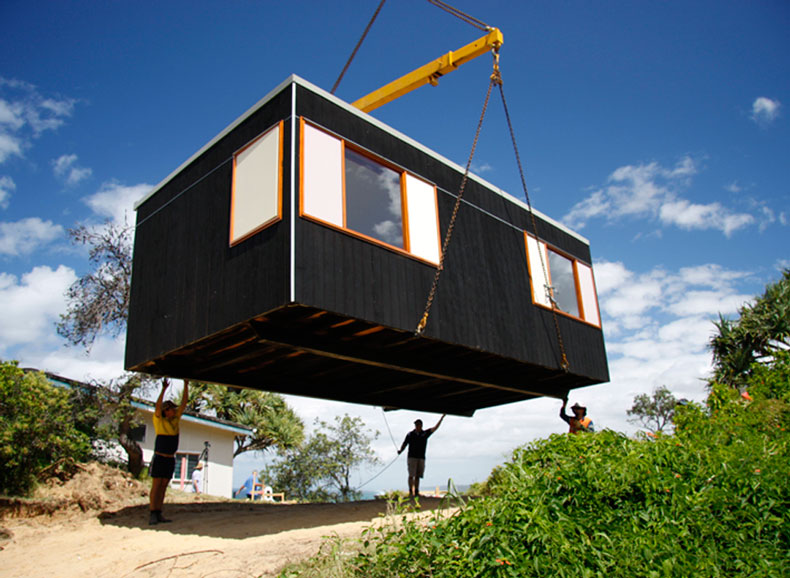 With Happy Haus, the whole house is fitted out (taps, cupboards, switches) before it's put on the truck. So when it arrives at the property, it just needs to be connected to services and it's completely livable. This is great news for regional and remote areas where tradespeople may not be equipped or qualified to deal with tricky components or fittings. 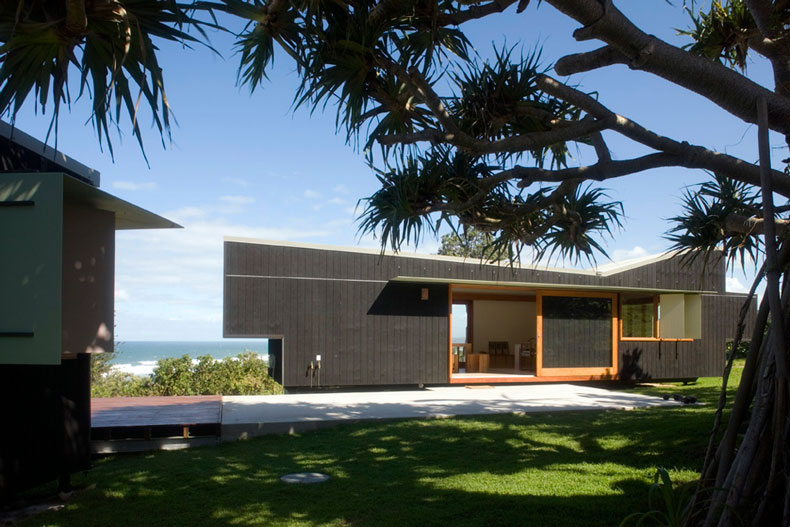 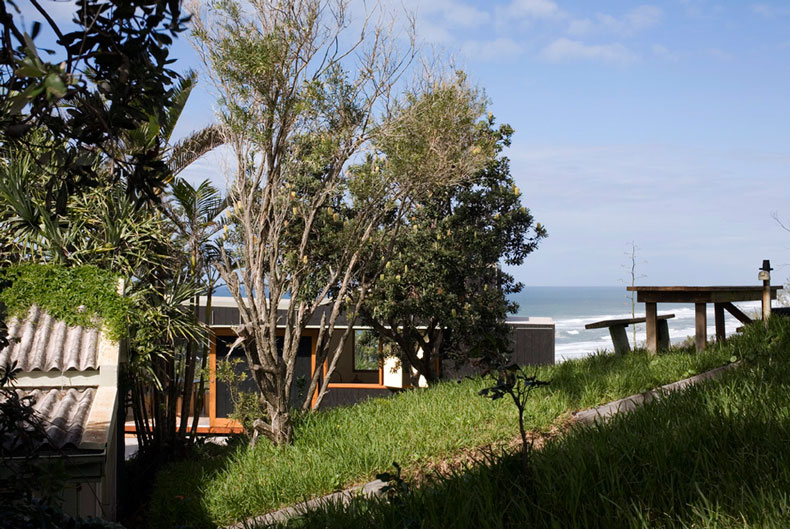 Despite the ability to pack it up and stick it on the back of a truck, the DHAN series of Happy Haus does not sacrifice finishings and quality interiors. The houses have timber sashes, shaped internal volumes and a pelmetted interiors to make the homes fell more, well, homely. 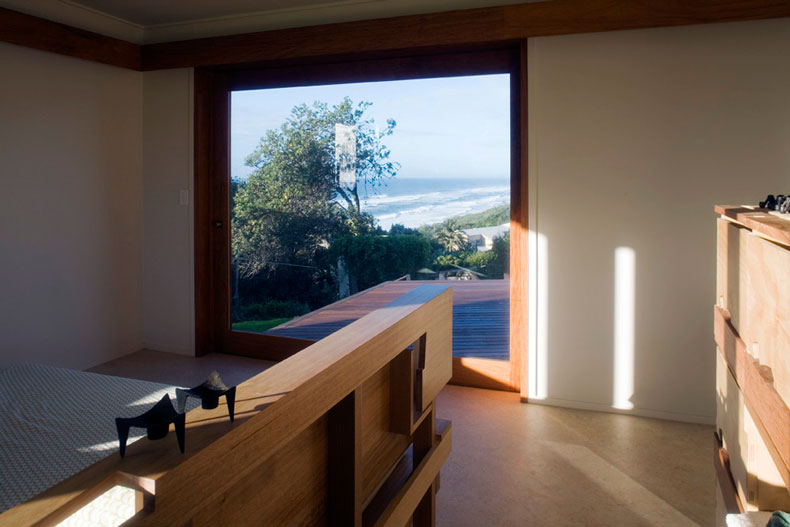 The plan encourages the owner to arrange the components to create clusters of buildings in a way to suit their lifestyle and the site. Various arrays, groups and clusters can be achieved to highlight an important view, catch the most of the winter sun, or shield from prevailing winds. The configuration options let owners customize the Happy Haus to their own unique needs. 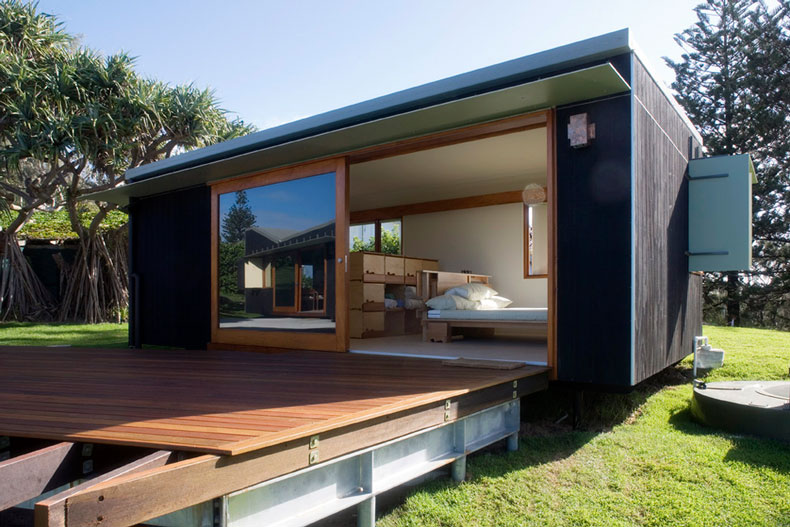 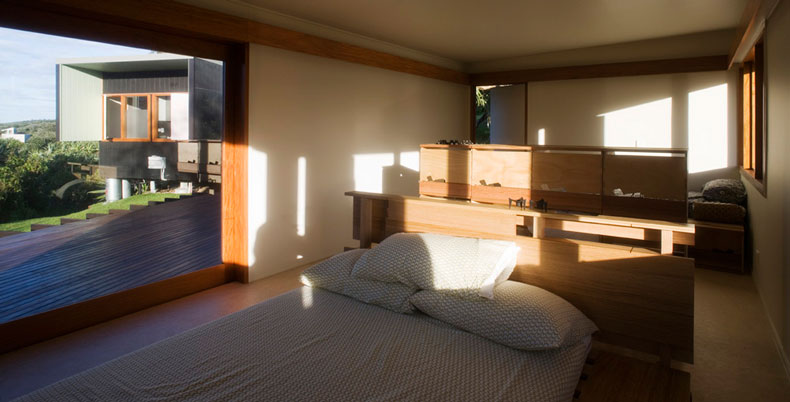 Benefits for Remote and Rural Areas

"There is a current demand for housing which is acknowledged by attempts made in another hybrid situation – very remote housing in areas of limited skill and resources. Mining operations, indigenous housing and exotic holidaying share these curious conditions.

Housing fails because the services and systems fail. This is because of poor installation (there is less skill in remote areas) and poor maintenance, in the same skill short environment. Multiple orientation potential and the tailorisation of opening protection will formally differentiate the DHAN from setting to setting (even the varying colour palette plays its small part)." -- Donovan Hill Architects 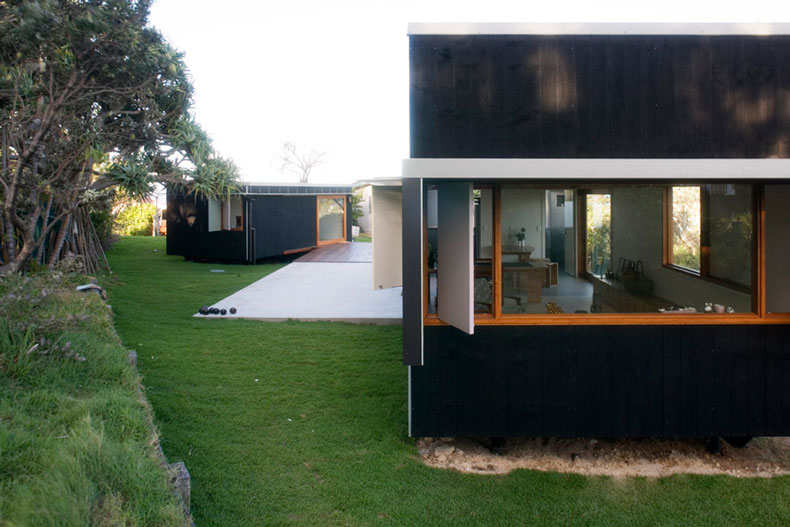 Having the different trades conduct their work in a controlled environment, working for wages rather than as sub-contractors produces real value for the Happy Haus. This means houses can be constructed faster and for less than a traditional project. Even once the transport costs are factored in, this style of building still represents value.

In Australia, the problem area is the cost of compliance, authority and establishment (red-tape) which really adds up with this non-standard form of development. If we could change the laws then prefab housing could become a viable alternative -- particularly in remote and isolated areas. 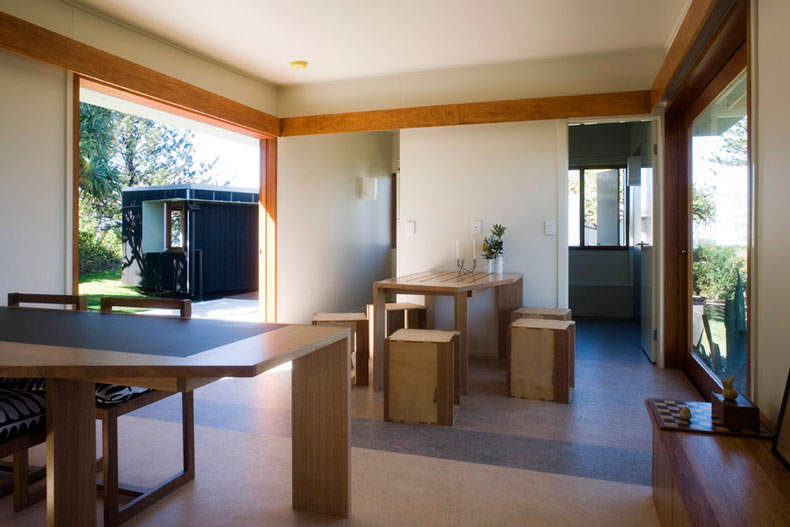 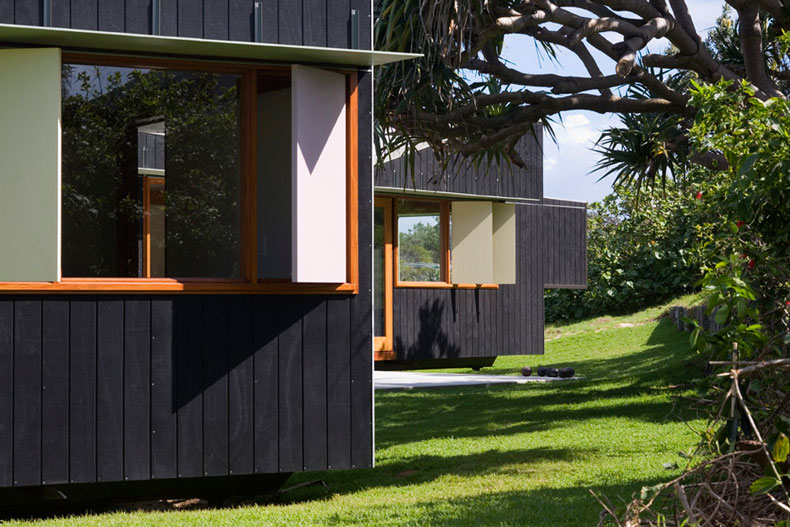 "Aside from using reasonably ‘eco’ materials, the consolidation of transport energy into a singular significant event compares favourably with tens of dozens of subcontractor trips to sites. (Transport being more carbon offensive than building use.)" -- Donovan Hill Architects 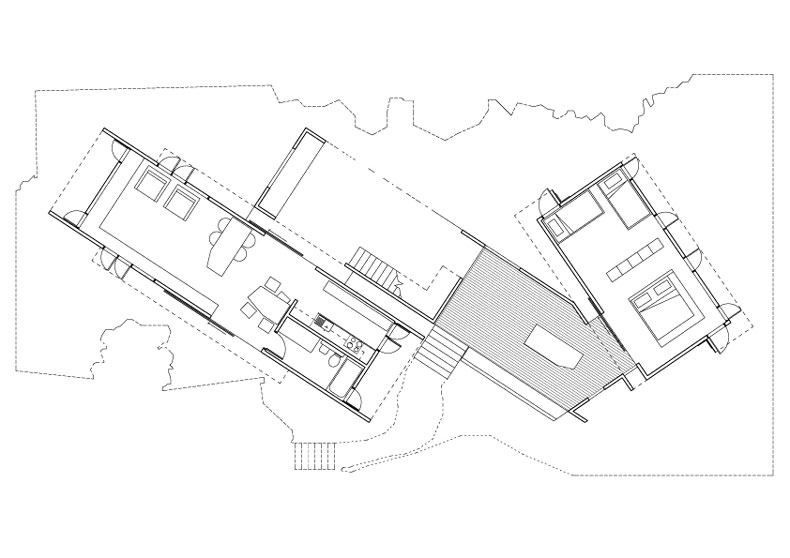