Mountain Retreat: A Subtle Insertion in the Alpine Landscape

The Mountain Retreat by Fearon Hay Architects is a small structure set within a high country station occupying 1,300 hectares on the south facing shores of Lake Wakatipu, Central Otago, New Zealand. This region of New Zealand is also known as the Southern Lakes. It is an alpine environment formed by heavily glaciated schist mountainscapes and vegetated below the snow line with beech forest. 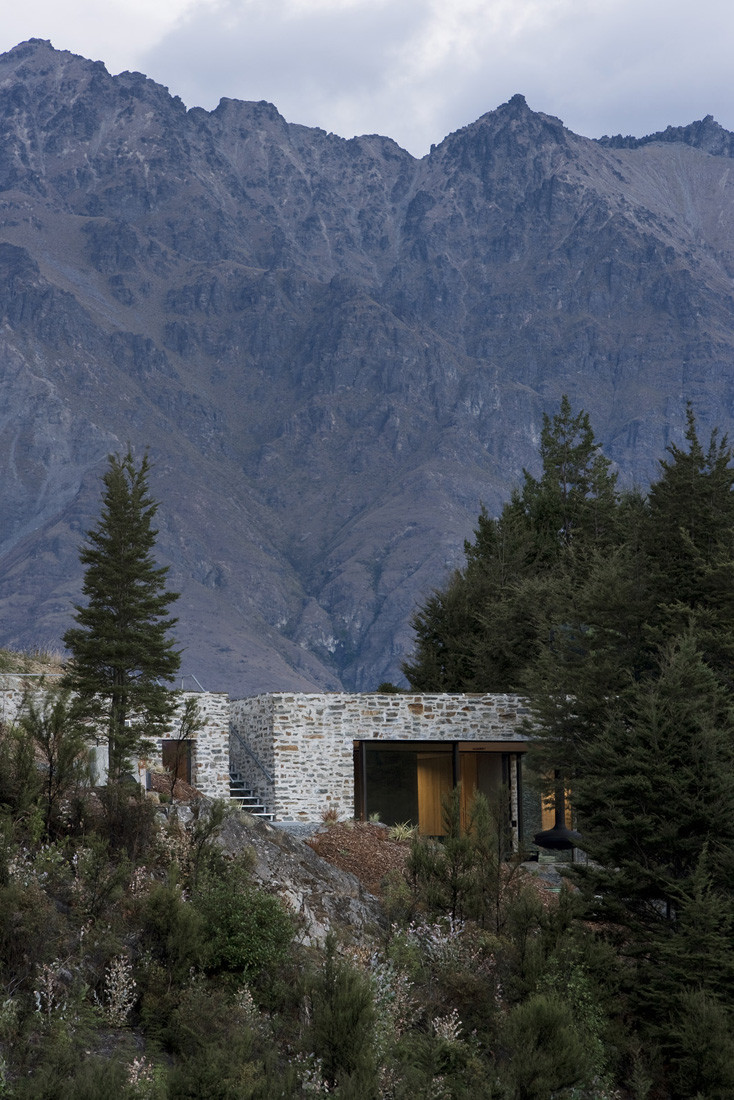 Early European occupation of the region began in 1840 with explorers seeking to extend pastoral activities established in the gentler environments to the north and east of the Southern Alps. This occupation was intensified by the discovery of the Central Otago goldfields in the early 1860s. Both forms of occupation constructed structures for shelter and utility with the stackable weathered schist readily available around the rivers and glaciated mountain slopes. 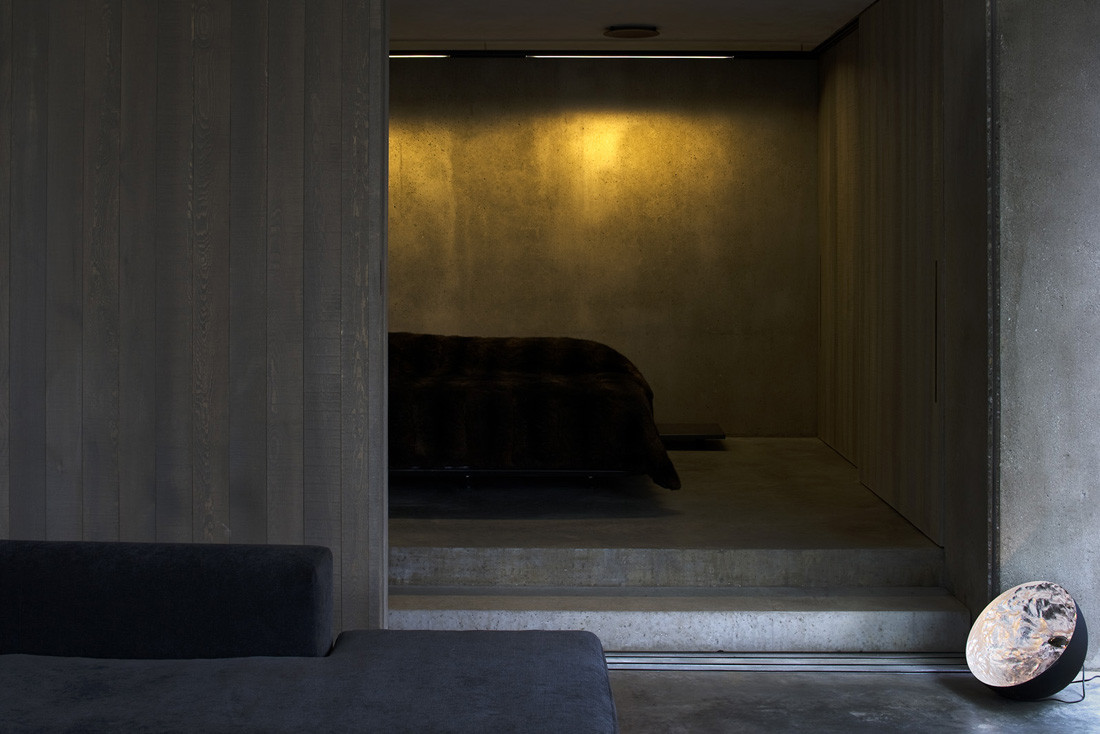 This retreat is designed for a young family who do not reside in New Zealand. It is intended to maximize the sense of living in the landscape and reference these early structures. The retreat is intended for use by varying numbers of people across all seasons. 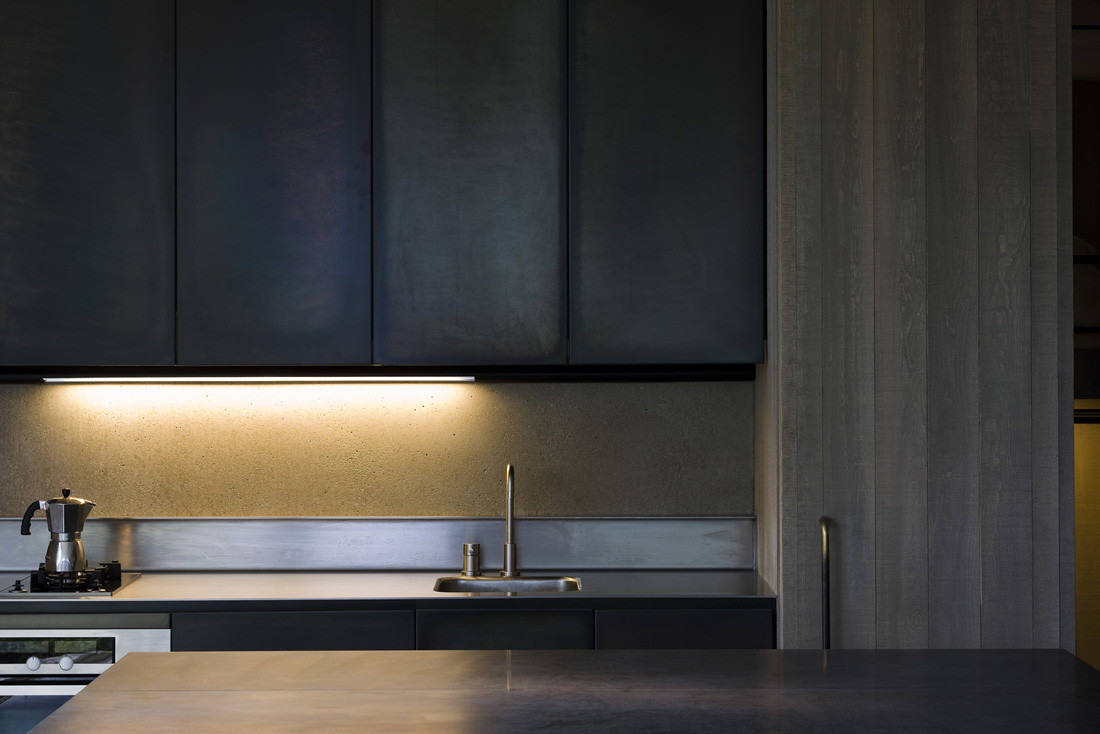 The design is a simple arrangement of spaces within a predominantly open plan. A main sleeping space opens over the living space and is serviced by a centrally located bathroom. Sleeping accommodation is augmented by a bunkroom with double bunk, allowing accommodation for anything from a single adult up to two families with children. The overlap and combination of sleeping, living and bathing functions allows for flexibility of use, introducing variety and a certain complexity to the inhabitation of a small building. 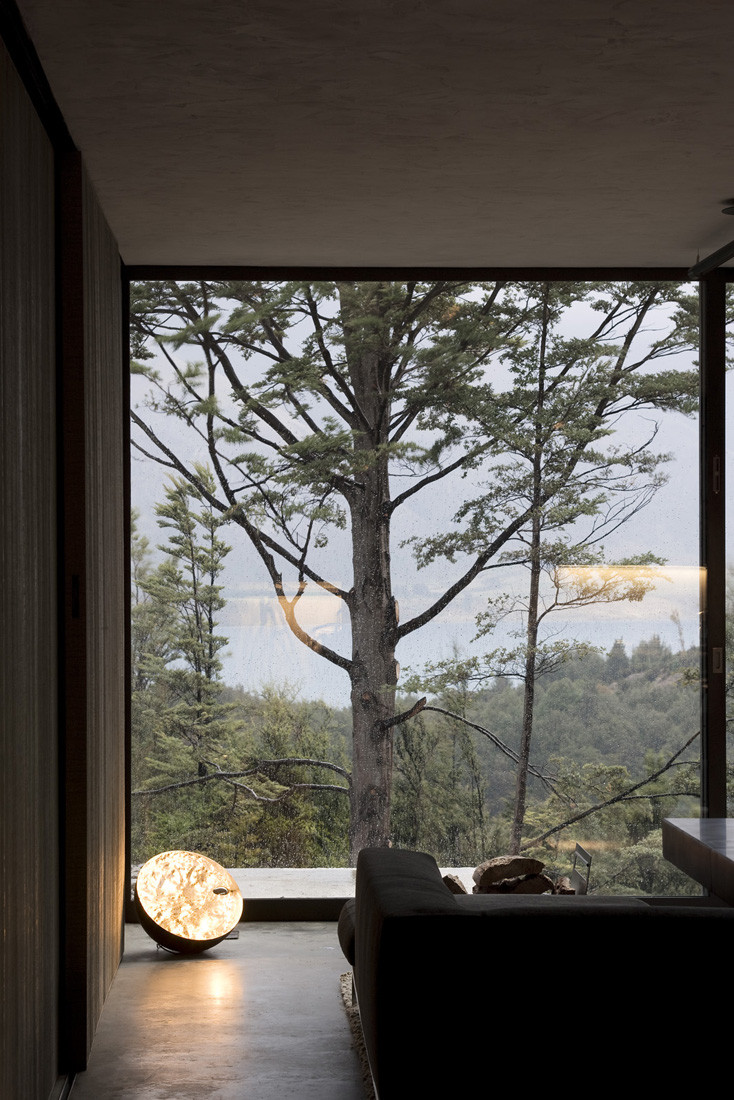 Entry is gained from the roof with the building concealed from view when arriving at the site. Steel handrails and the flue of the fireplace are the only indications of the space below. Plan and section show the building to be a void removed from the mountain slope. The internal space is extended beyond the natural ground surface with a structure of reinforced concrete blanketed by gravel ballast over the roof and heavily rendered schist cladding to the walls. 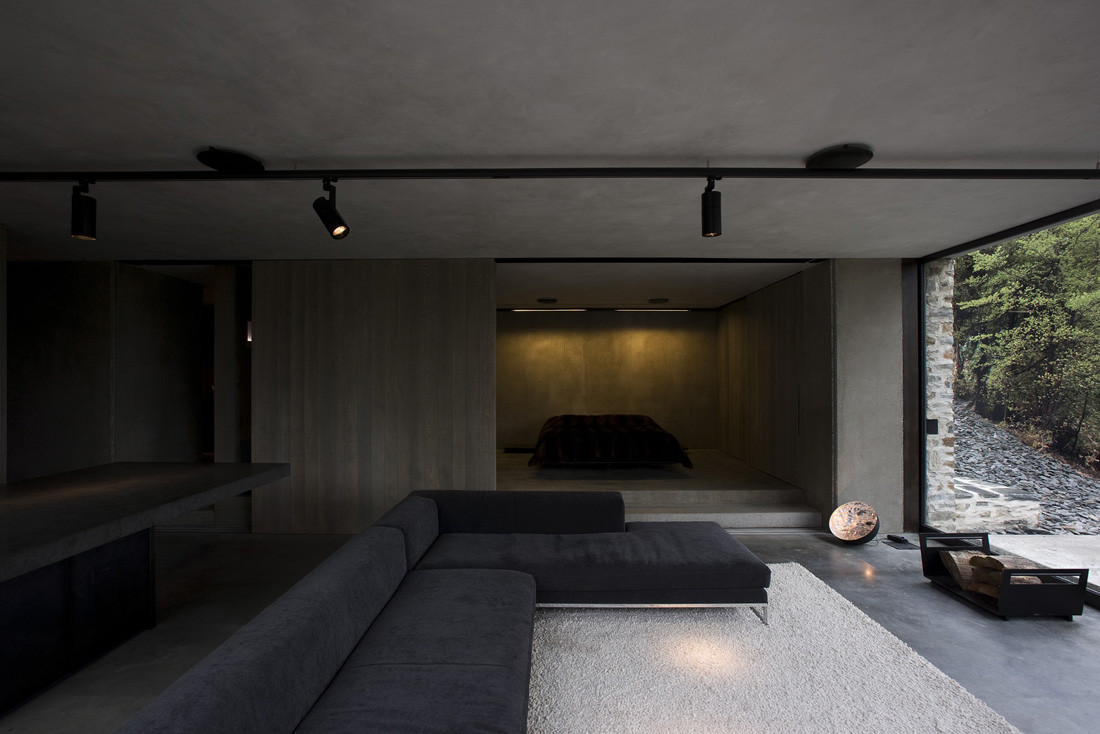 Electrical power is provided to the remote location, however the retreat provides its own on site wastewater management and bottled gas energy source. Water is sourced from a nearby mountain stream, tank stored and UV filtered. 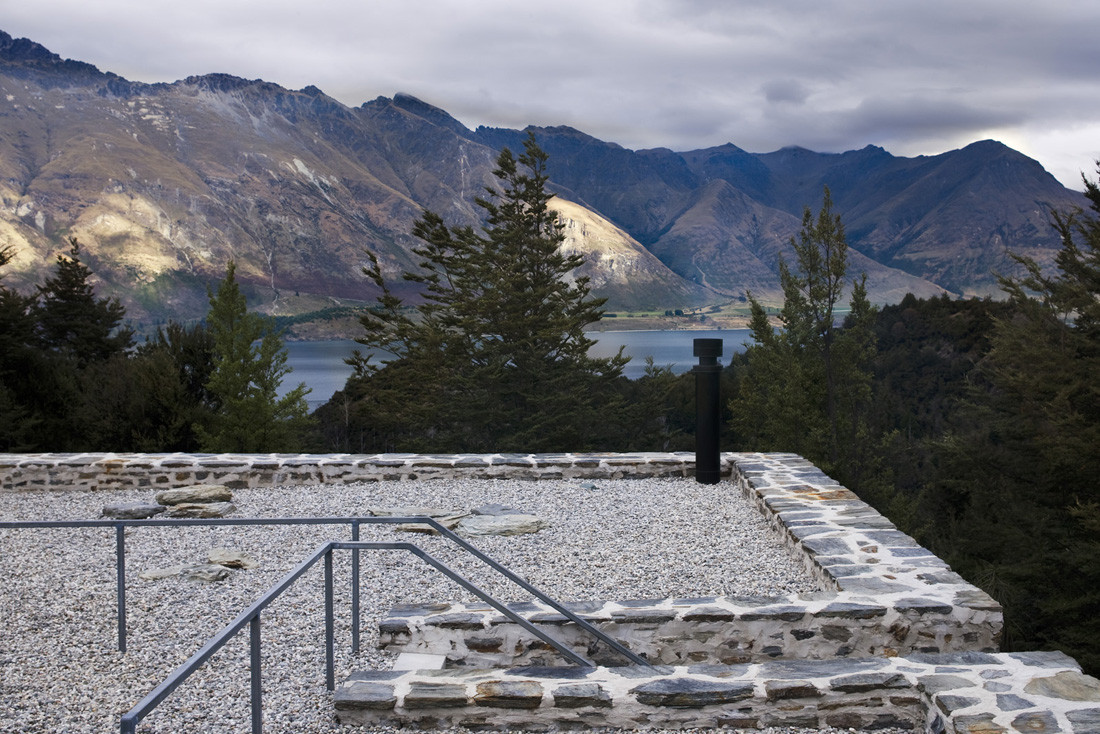 The external appearance of the building uses the heavily rendered stone to express a cubic form embedded in the side of the mountain amongst beech trees. The cave-like space is expressed as a horizontal void removed from this solid. Vertical supports have been avoided to enhance the sense of a slice of space removed from the hillside. A suspended log fire anchors the cantilevered corner and provides a hearth against the backdrop of beech trees and the lake when viewed from within. 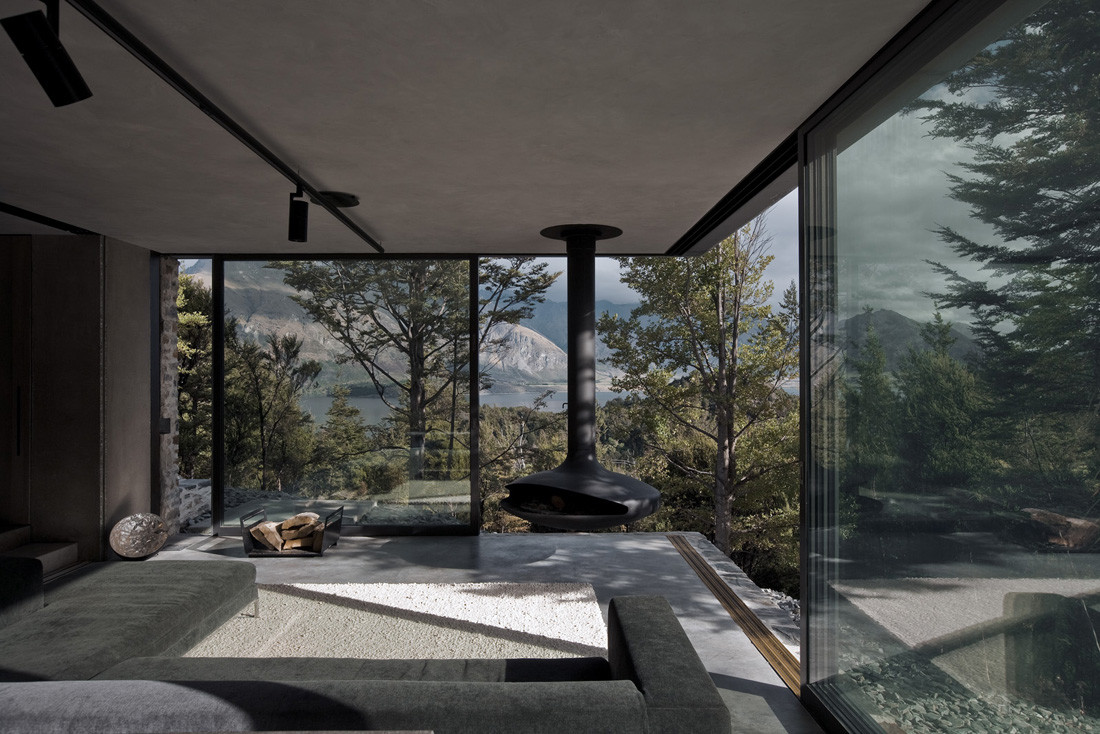 The southwest oriented mountain slope was chosen for its position in the existing beech forest and available mountain and lake views, however this orientation poses a challenge for solar access in the alpine winter. The retreat is set into the surrounding rock and enclosed with floor to ceiling insulated glass units sliding in steel frames. The space is therefore insulated from the alpine climate, including the diurnal extremes of the Central Otago summer. Heavyweight construction provides significant thermal mass. The glazed elevations are further screened by the surrounding beech forest, filtering the summer light from the potentially intensive southwest orientation. Heating set within the insulated floor slab provides additional comfort when required in the extremes of winter. 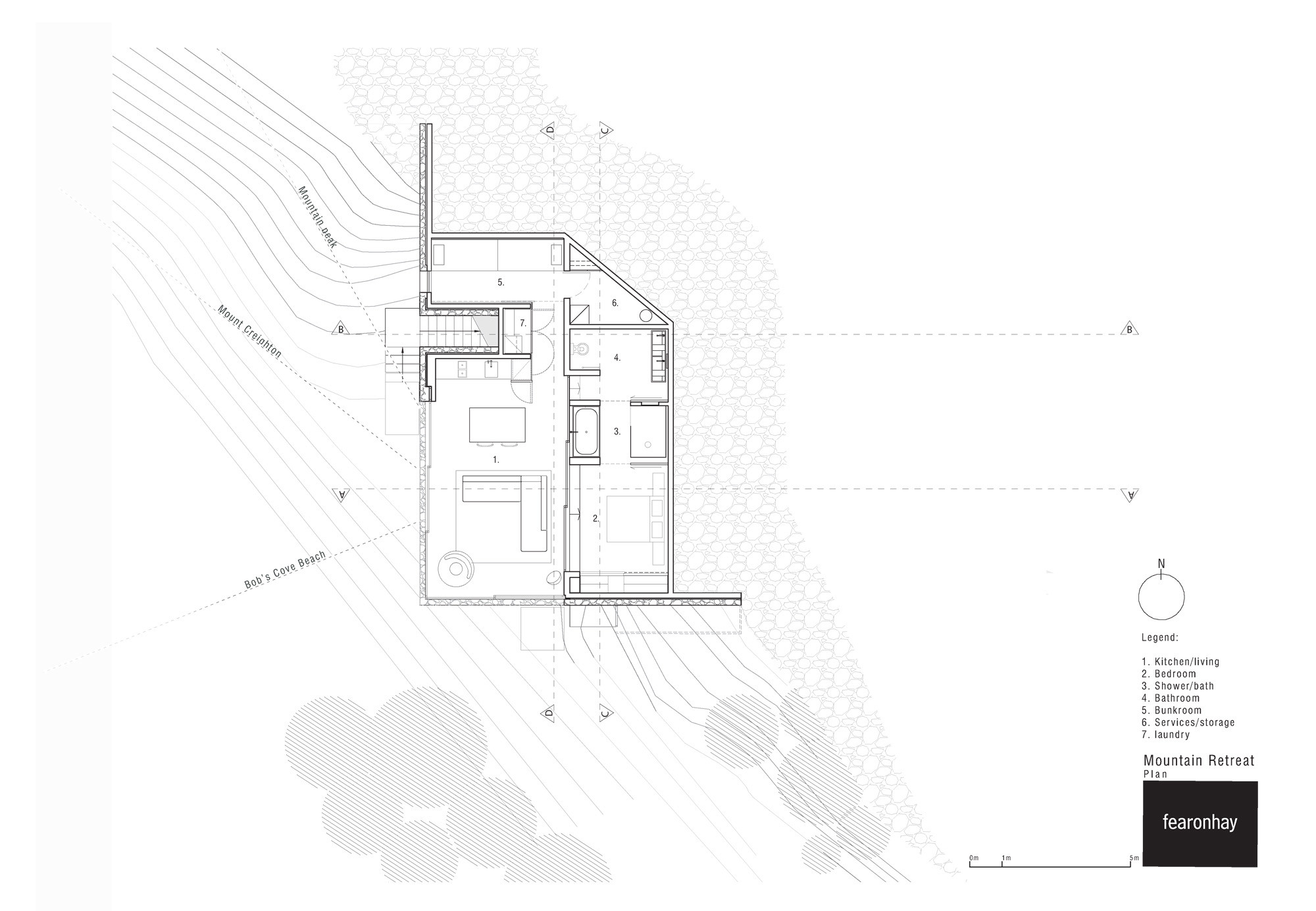 The colours and textures of the cladding integrate the building into the gravel tracks, exposed rock faces and scree slopes of the alpine environment. The interior space is defined primarily by exposing and sandblasting the concrete slabs of the wall and floor structure. A polished plaster ceiling complements the exposed wall slabs to promote the sense of space carved out as a cave. This heavyweight construction is refined by the introduction of blackened steel sections and rough sawn cedar boards.

The architecture seeks to be a subtle insertion in the alpine landscape. The internal environment is both muscular and refined, referencing the toughness of the environment while providing comfort required for a retreat in the mountains.